There are only so many things in Wisconsin besides trees, farms, cheese delights, and places of oddity, and then there is also Milwaukee. Milwaukee is the largest city in Wisconsin sitting on Lake Michigan and famous for, well, not much actually, besides beer, the location of the sitcom Happy Days, segregation, and a creepy serial killer. It was the brewing capital of the United States before prohibition, and never really recovered, unless you count being taken advantage of by Chinese Corporation Foxconn as recovery. 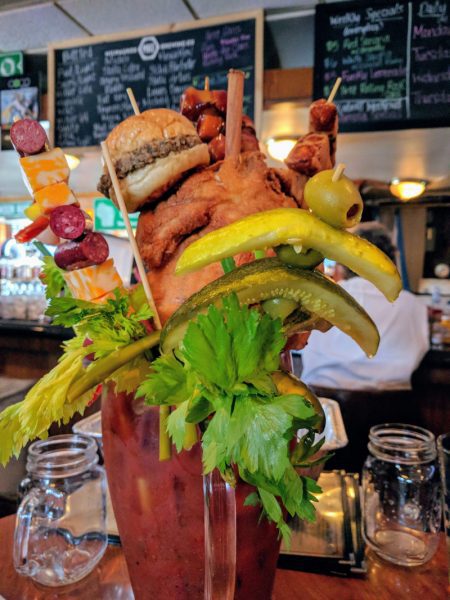 One thing that Milwaukee is famous for, at least in the small circles of foodies and Bloody Mary connoisseurs I travel in, is for the giant Bloody Mary known as The Beast found at Sobelman's Pub and Grill. It takes 50 minutes to prepare and includes and entire deep fried chicken, and an assortment of all the appetizers available at the bar, cheese, pickles, summer sausage and a side of french fries. It is huge! 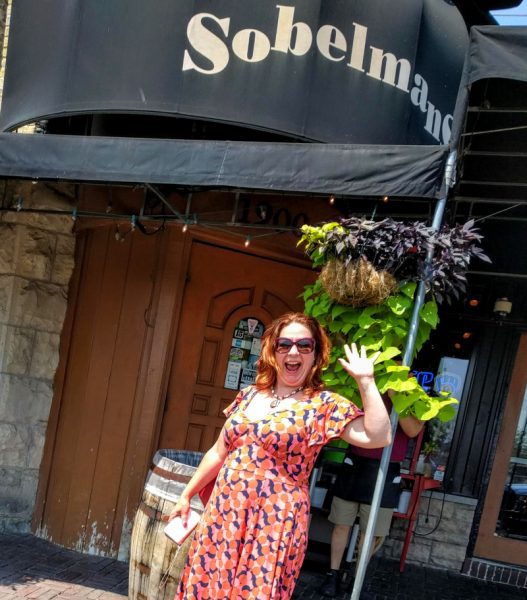 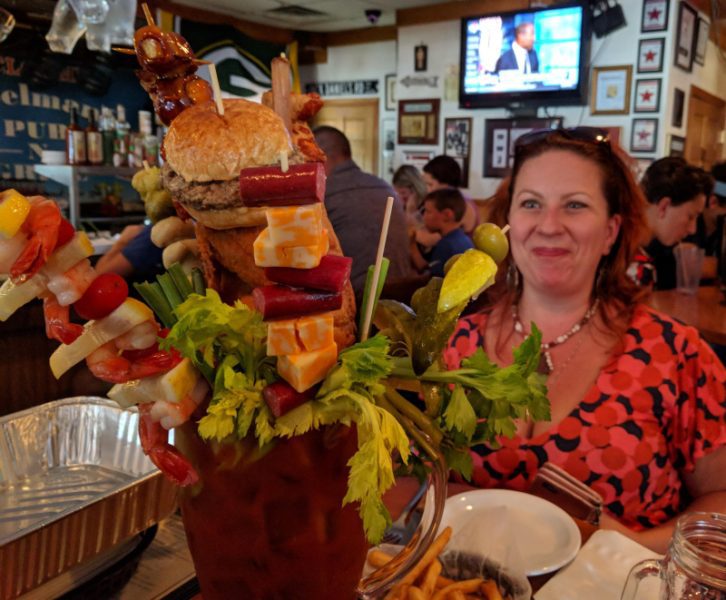 Here is another perspective – with me looking at the giant pile of food not sure whether I  should smile or cry. It was definitely enough for three persons to have an extremely filling lunch, along with the 2-4 cheap beers that come with it as a chaser.  The whole thing is $65.00 after tip and tax – which seems like a lot for a Bloody Mary, but for lunch for 3 that was $20 each with more alcohol than anyone ever needs in one sitting for included. Definitely worth a stop in Milwaukee, as long as you have a place to nap afterwards. 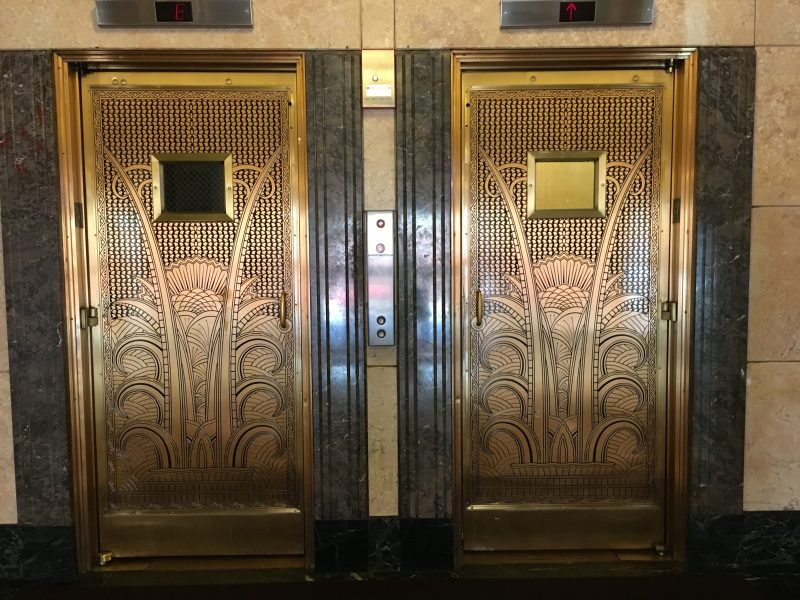 After finishing ours we checked into our hotel, The Ambassador, an art deco establishment that has been in existence since the glory days of Milwaukee's Grand Avenue (that was once the home beer baron's and mansions), before Grand Ave became the location of crappy apartment buildings and Jeffrey Dahmer and changed its name from Grand Ave to something, well, less grand. 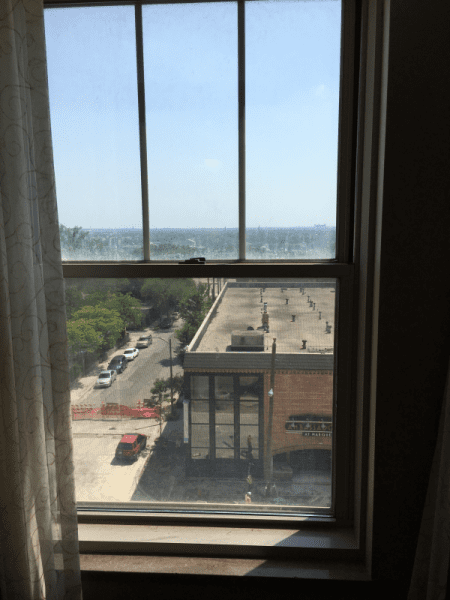 We had a corner room and a pretty sweet deal through hotels.com.  As did the entire city of Milwaukee who was moving in with luggage carts filled with cases of beer and other alcohol for the Bastille Day celebration that was going to be taking over the city that weekend. We put Dan down for a nap (he drank all of the Bloody Mary and 3 beers on his own) and decided it was necessary to go exploring of the downtown corridor and find the Bronz Fonz statue. 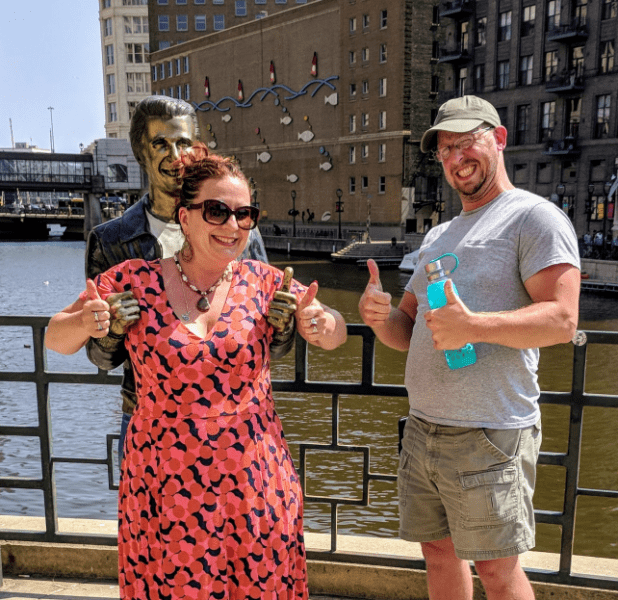 We found him, along with a less than ambitious and slightly racist Lyft driver and a really hot and windless downtown Milwaukee. 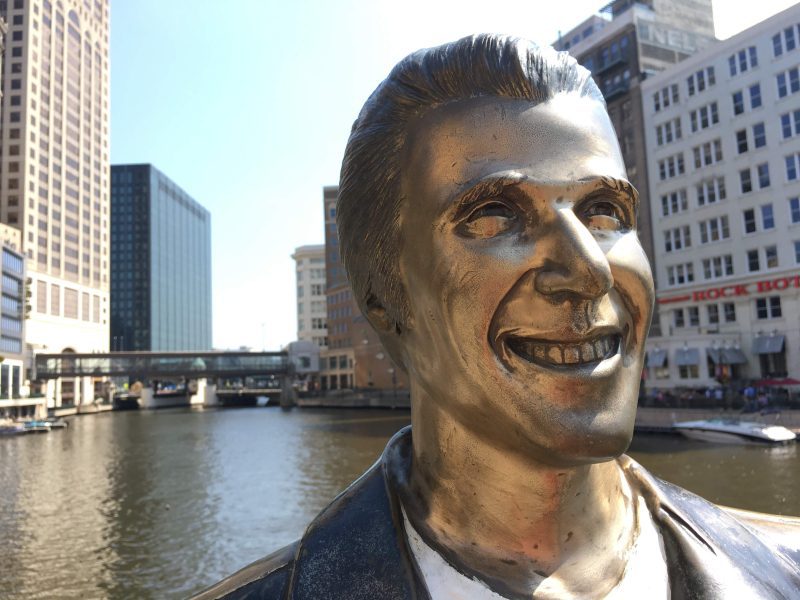 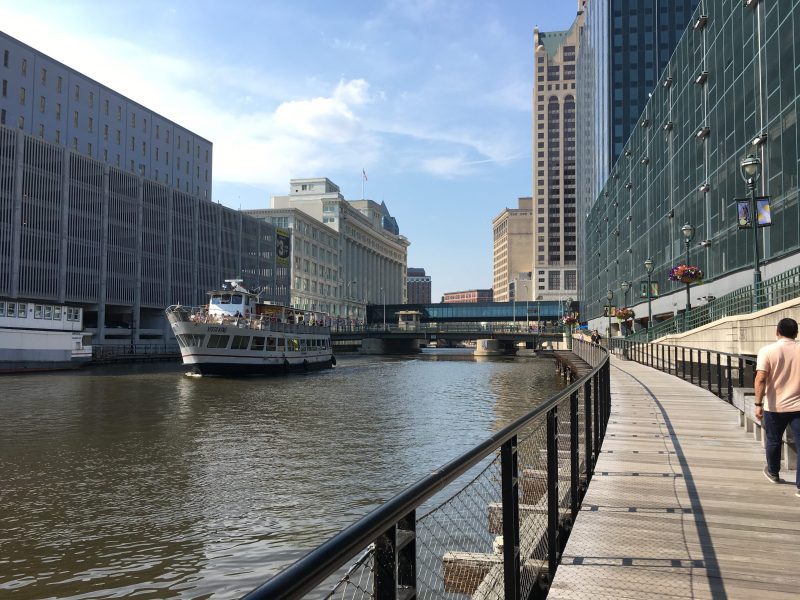 You would think a system of waterways along the shores of Lake Michigan would at least be slightly breezy. But its not. And on a hot day the asphalt cooks you to a certain level of overheated that makes you yearn for something cold and hydrating to drink. 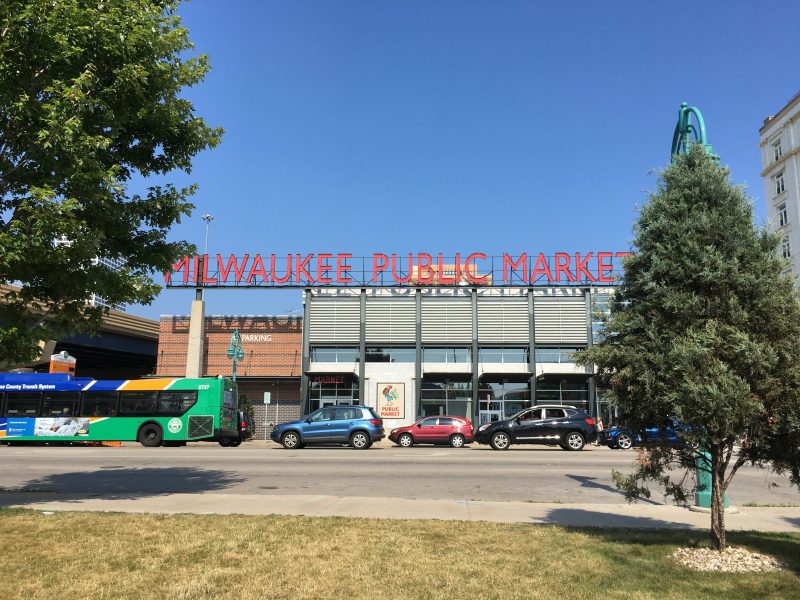 We wandered into the public market as it must be cooler there inside and filled with interesting things. 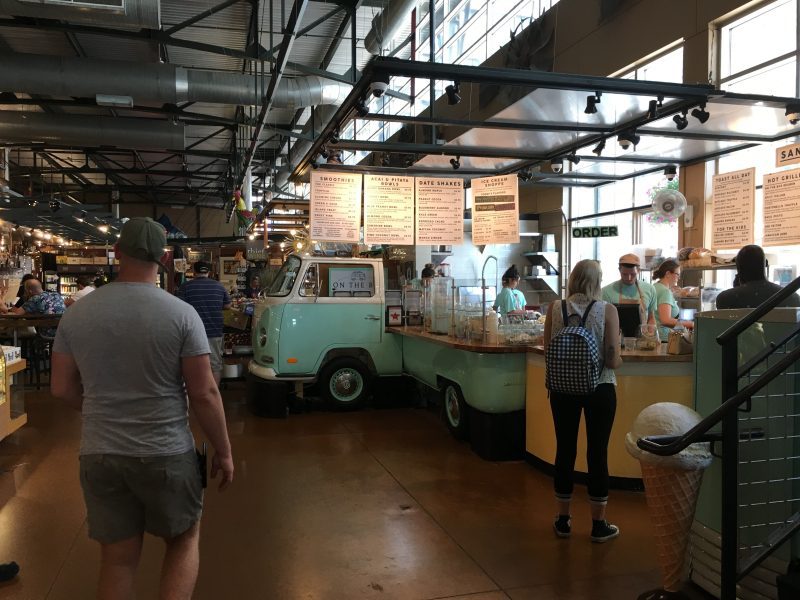 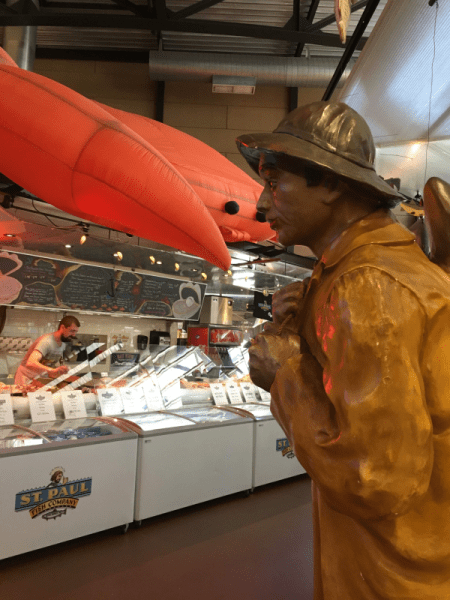 I got a shot of ginger juice with a pineapple chaser for refreshment. 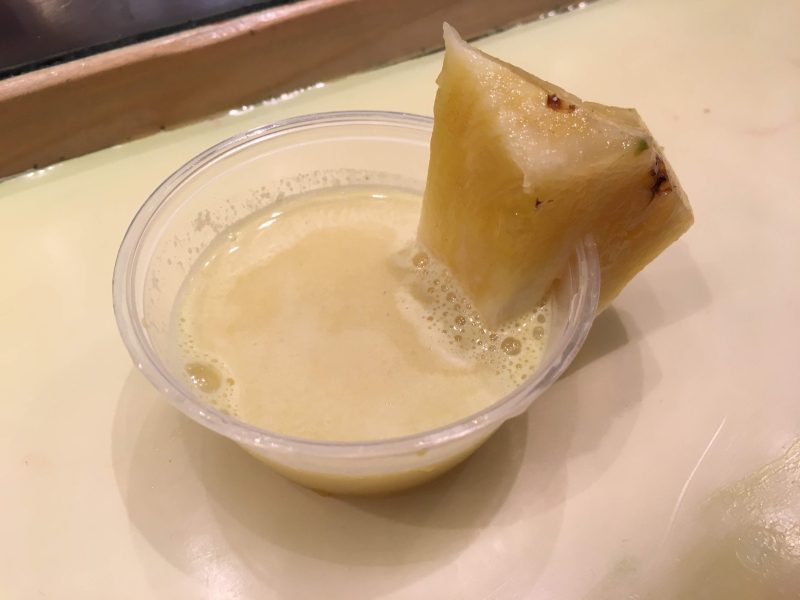 Then we were ready to face the heat again and find Lake Michigan. It was a longer walk than we anticipated but we did eventually find it, after much internal drama about melting in the heat with no breeze. 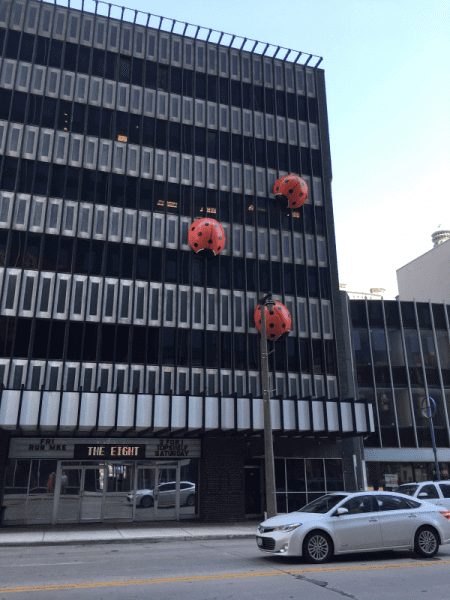 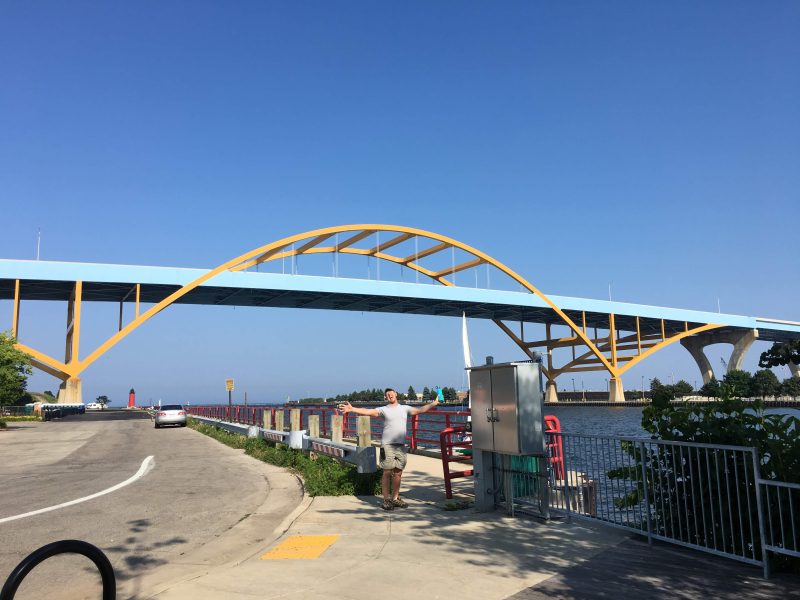 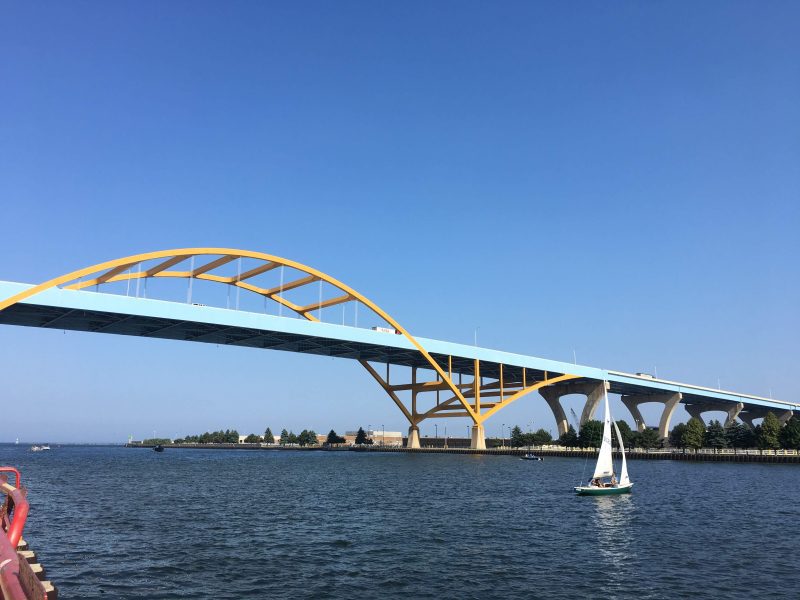 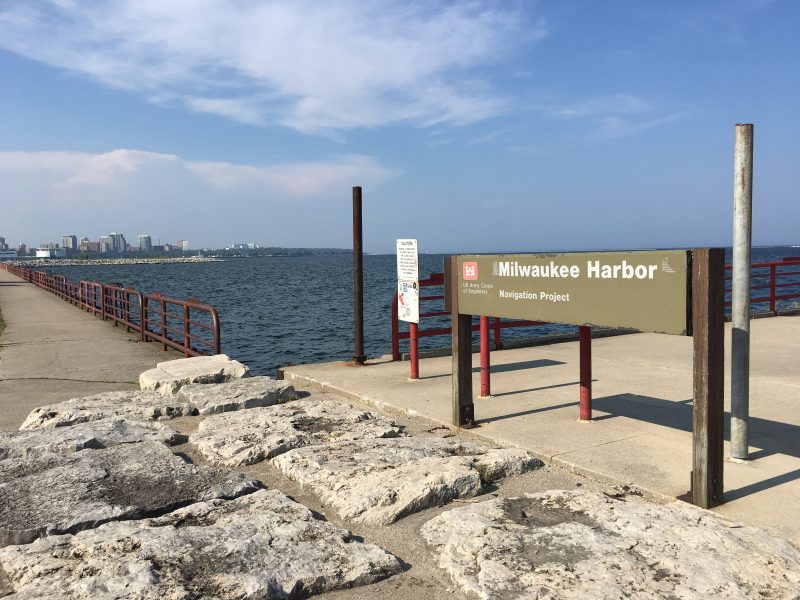 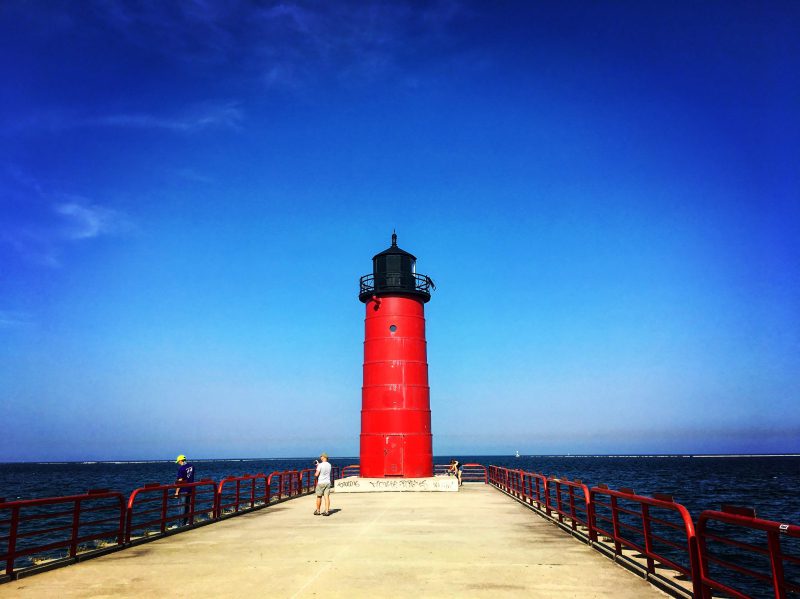 By the time we got to the end of the pier to see that the Milwaukee waterfront is lacking in all things except a breeze for the summer tourist it was time to call a Lyft to go back to the hotel to get ready for our reservations at Sanford, a farm-to-table institution of fine dining. Our Lyft driver on this end of things was really excited about our pick-up location and said as we got in, "Well, this is the most exciting location I have ever picked anyone up at!" He then proceeded to explain why the waterfront is filled with paved parking lot instead of tourist attraction – industry. Essentially the parking lot is a giant toxic waste dump cover up. 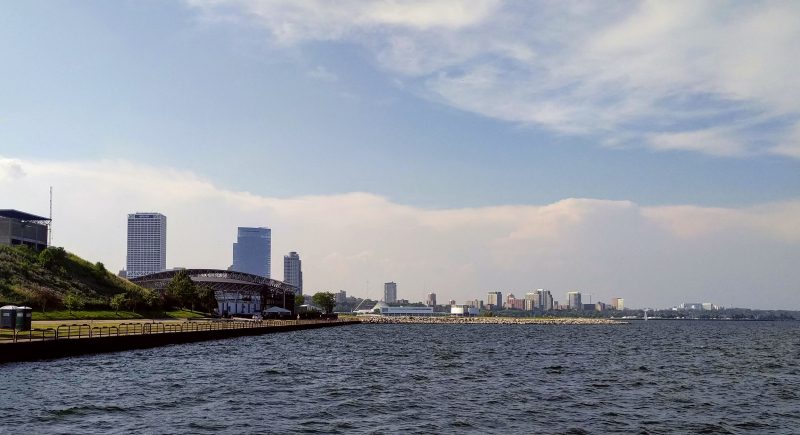 We should have gone to the modern art museum, but I didn't know we were not going to get the chance to see it closer than wherever it is in this shot at the time. On our drive back to the hotel we also learned about Foxconn's deal to take millions of gallons of water from Lake Michigan for its industrial operations plus tax cuts and everything else that was handed over for a small set of manufacturing jobs in Wisconsin. It sounds less than legal based on the Great Lakes Treaties we have with Canada, and a horrible deal for no guaranteed high paying jobs for the state of Wisconsin or city of Milwaukee. But alas, it appears to have happened despite the best wisdom. 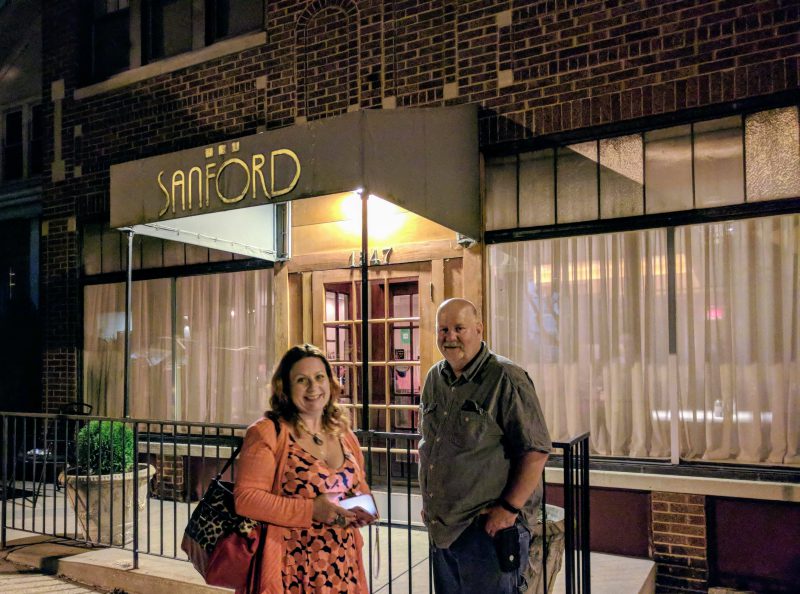 So here we are after dinner at Sanford. 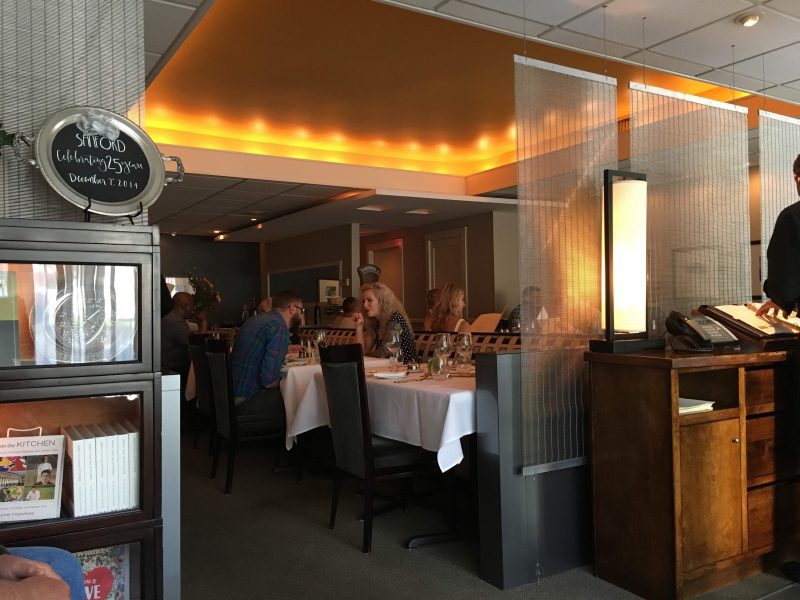 We thought going in that Sanford would be like a Portland, Oregon farm to table, featuring foraged ingredients and pickles in a special casual atmosphere.  Nope, here it was white linen eating all the way.  If the Midwest could get Michelin stars (outside of Chicago) this place should be in the running. Phenomenal service, timing and table settings. 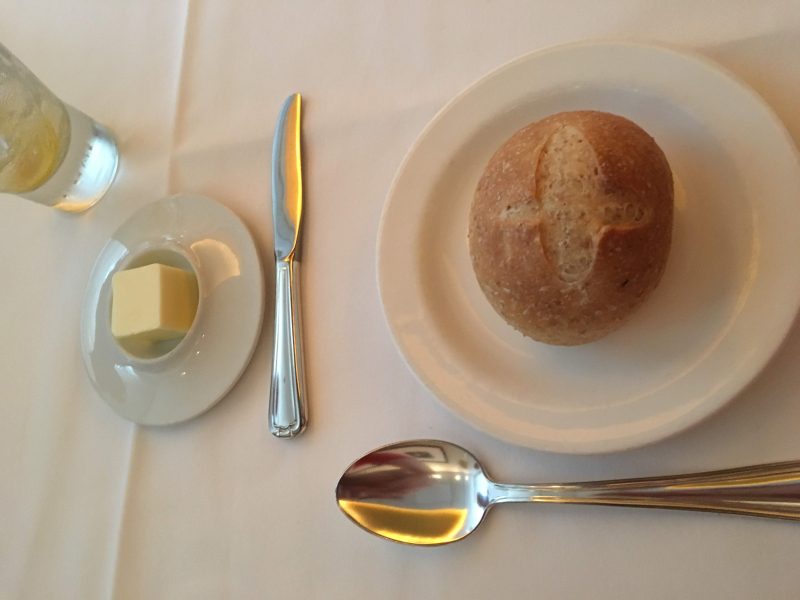 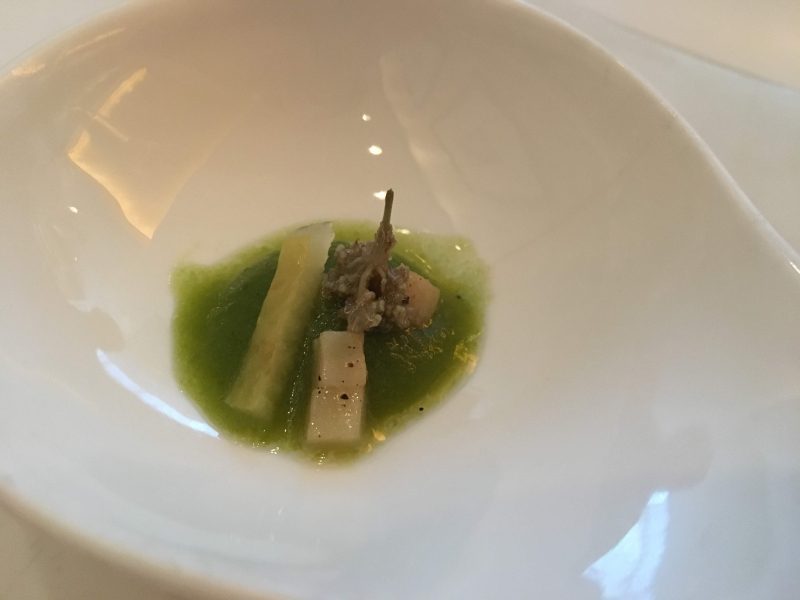 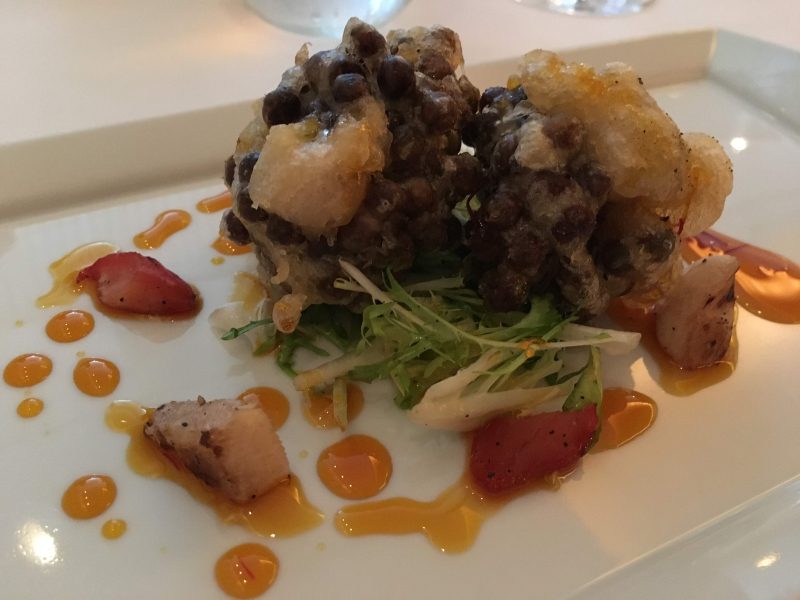 milkweed capers with radish and saffron

scallop in asparagus broth with mushrooms and spinach 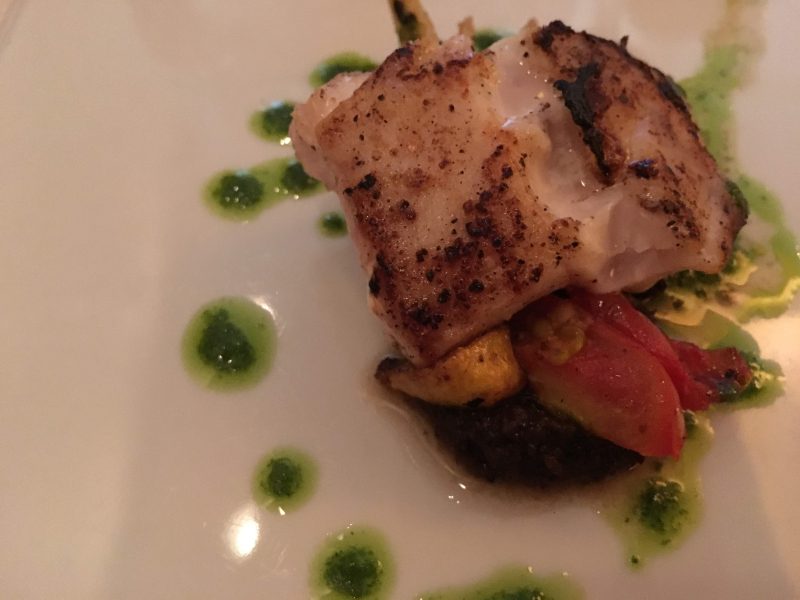 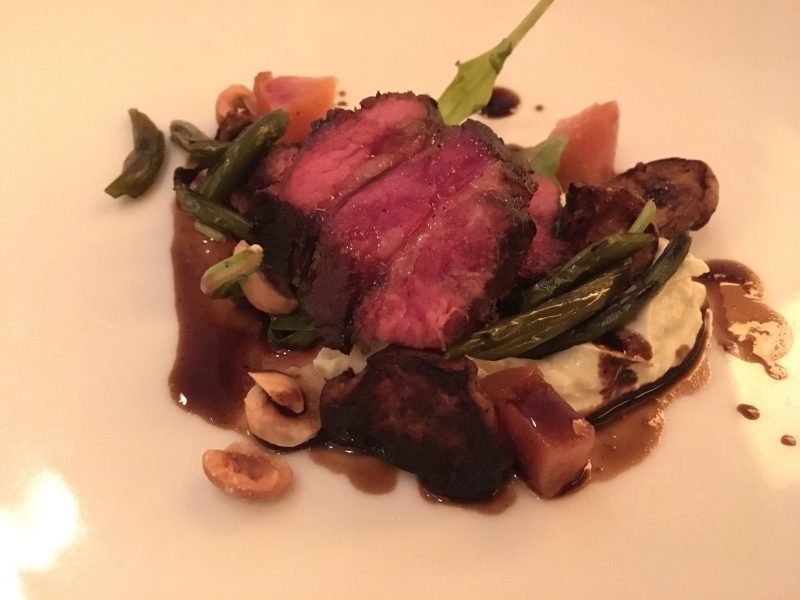 pork belly with ramp and lebneh 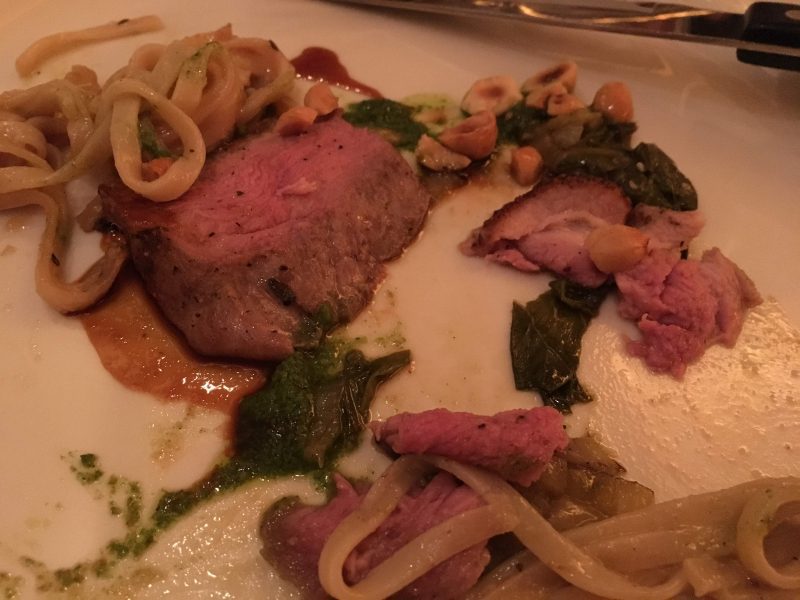 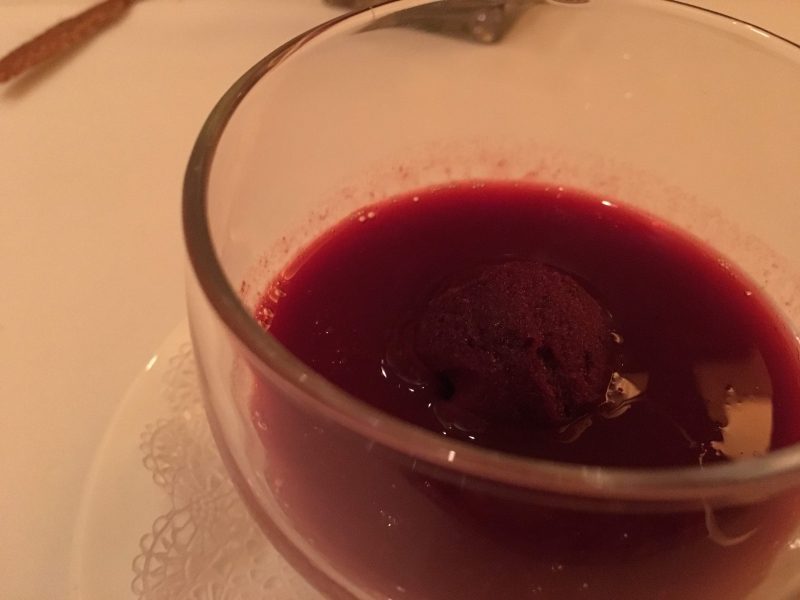 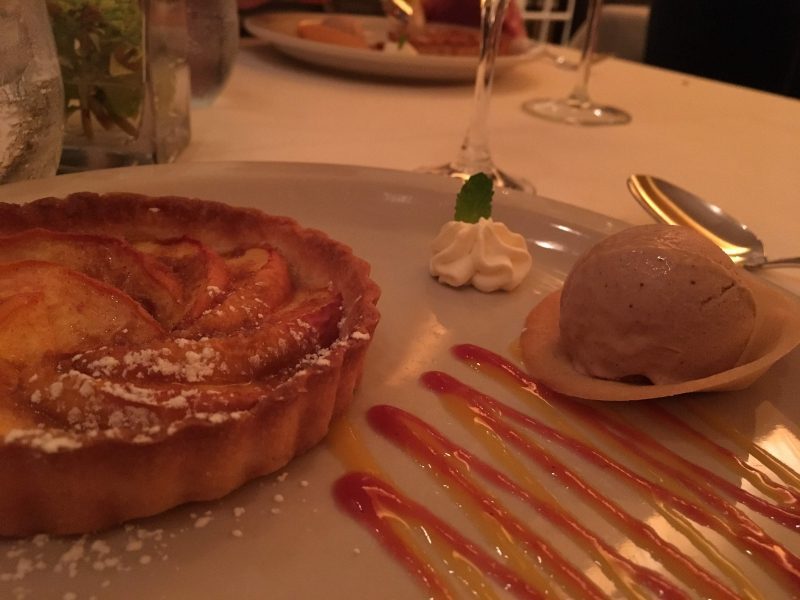 and Georgia peach tart. Peaches purchased in a back alley deal off a truck or something that only a chef obsessed with fresh produce would do.

It was a tasty and memorable meal.