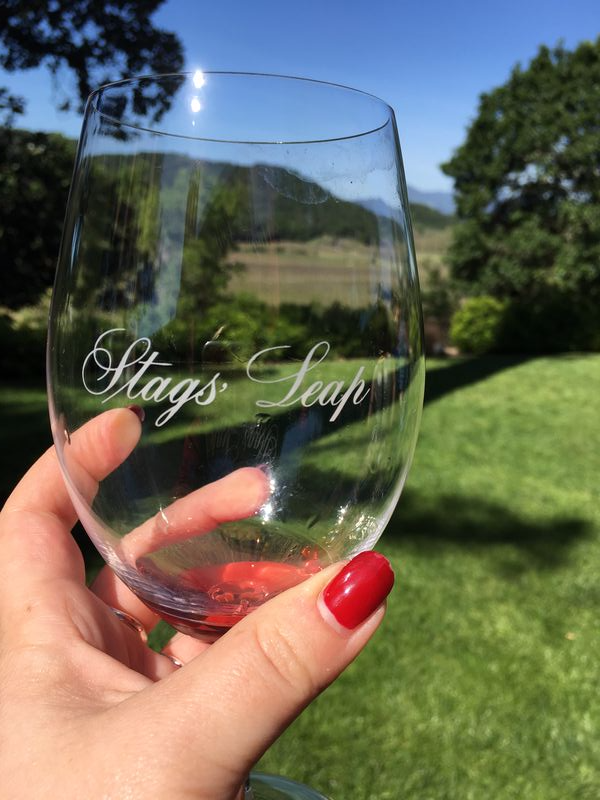 My first assumption was that "Napa" is a flat farmland filled with wine you can find in grocery stores that isn't very good. This went right out the door because we are staying on a mountain that looks over the valley and there are vines everywhere – on the mountain side, in the valley, not on the cliffs (of which there are a lot of cliffs). There is sort-of some flat farmland but it looks way more like this sandwiched between mountain peaks. 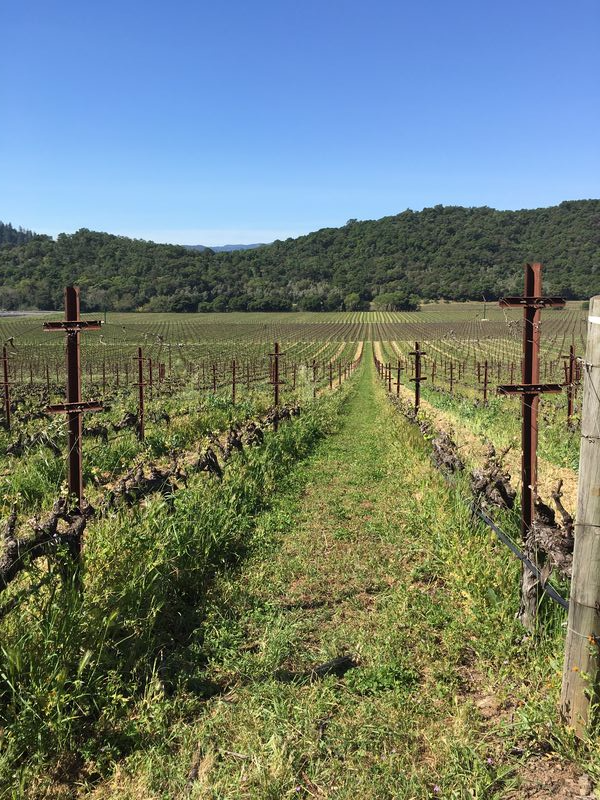 The mountain-like terrain also made us late for our first wine tasting appointment at Stags' Leap Winery (not to be confused with Stag's Leap Cellars).  We pulled in about 15 minutes behind schedule after calling to say we would be late and walked right into the wrong tour.  The tour guide finally stopped her spiel long enough to say – "You guys are in the wrong place, the 10:30 tour is in the house."  Now even more ashamed of our tardiness we rushed to the house to be caught up with our tour guide who was just pouring the second wine.  Really good wine.  Really good wine you can't buy in grocery stores. 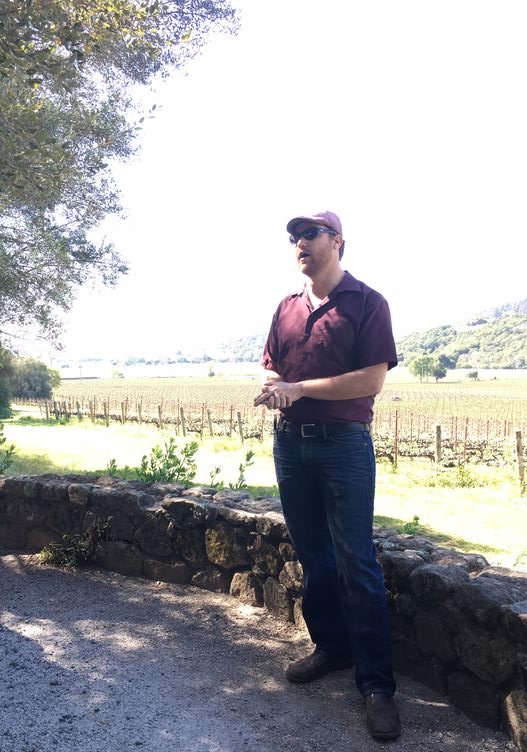 Our tour guide, Mark, broke no stereotypes of California wine guys for me.  He was pretty awesome though, and studying for his super sommelier certification.  He had a great sense of humor and shared a bunch of wines off the normal tasting menu with us – including the primo estate vintage using this crazy tool invented by a heart surgeon that lets you literally vampire out a taste of wine from a bottle without opening it.  I didn't write down the name of the device, believing I would remember, but I did not – but believe me it is very cool. 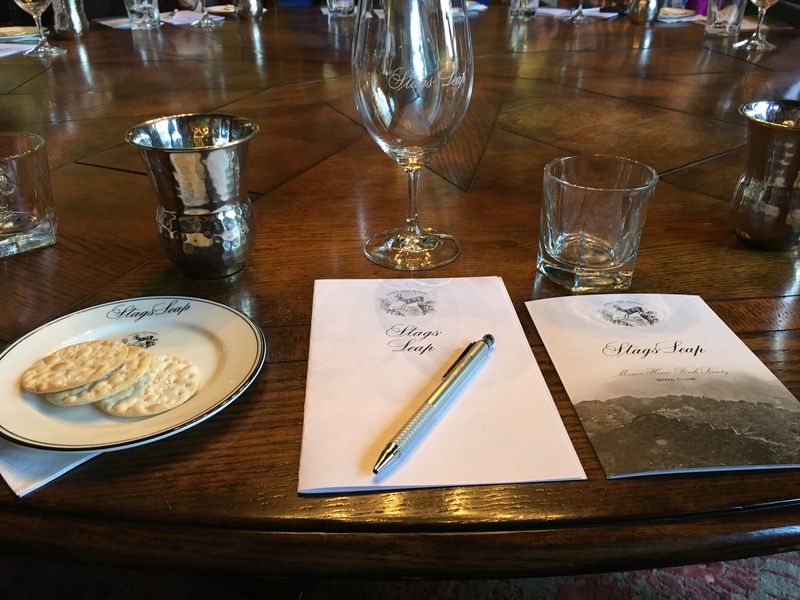 The inside tasting portion of our tour was quite fancy.  I enjoyed the consistency of the decorations featuring antlers everywhere. 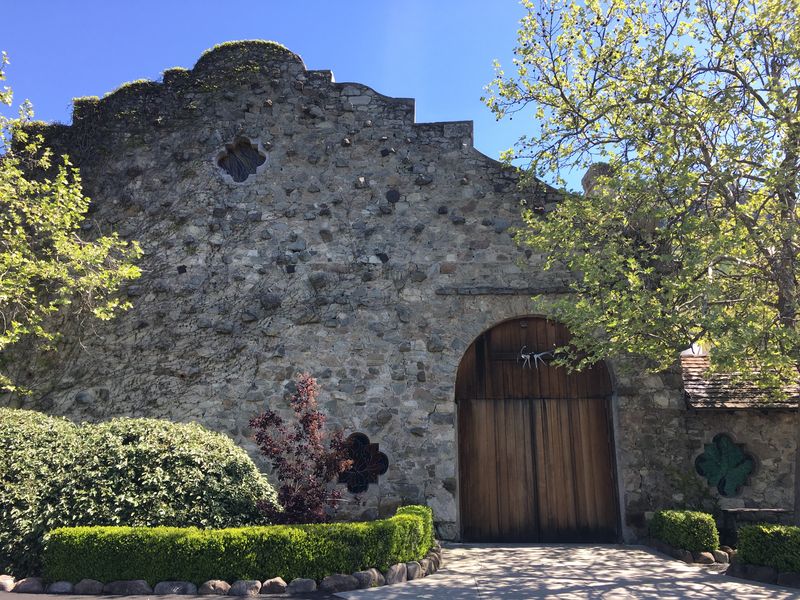 I also got to meet Calla lilies growing in a garden. My first non-florist encounter with the flower. 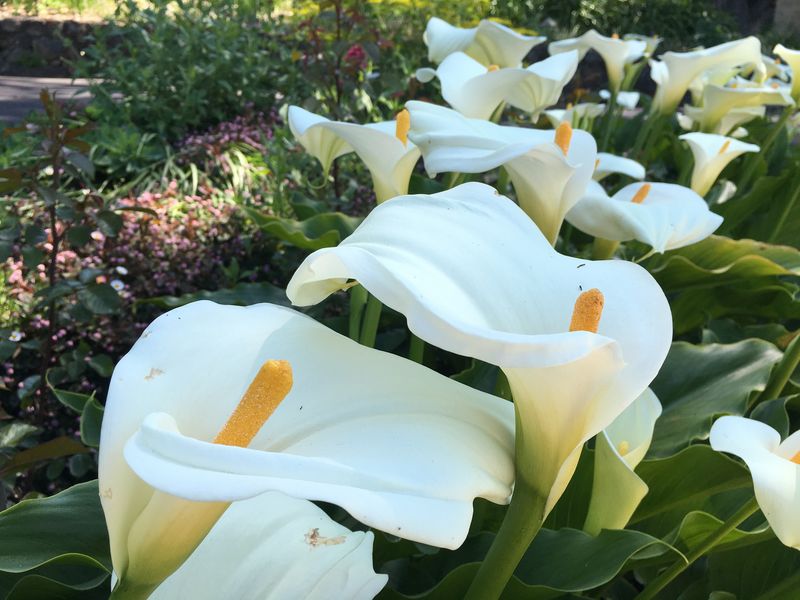 Our tour guide and somm also had great taste in food.  He recommended the Yountville Deli for a quick and easy bite for our lunch as we had 5:30 dinner reservations at Redd we didn't want to go crazy, nor cut down on time we could explore the over 700 wineries of the area. 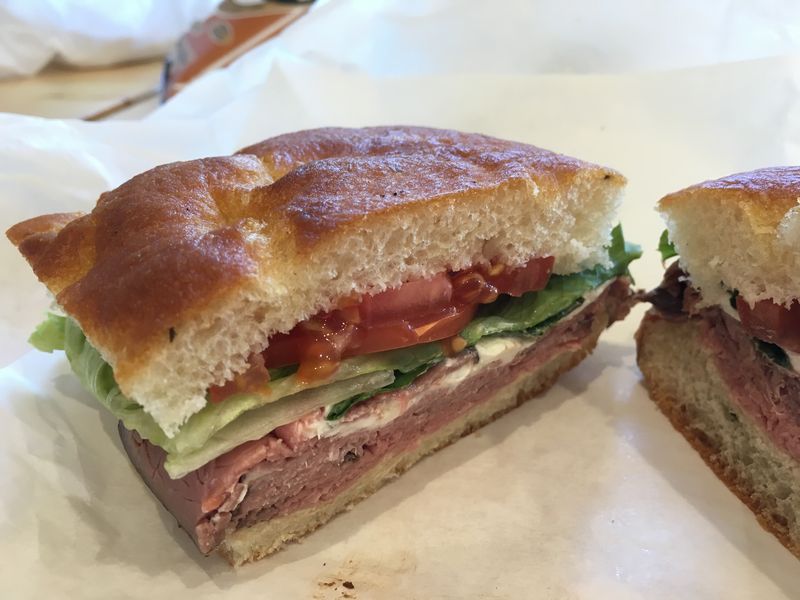 This was probably the best "Deli" sandwich I have ever had.  At least I never thought to even rank deli sandwiches until this moment in time because a deli sandwich is a sandwich right?  Well not if it has a heavenly blend of blue cheese and horseradish layered in with tomato and light roast beef.  Light and lushly umami simultaneously – yummy. 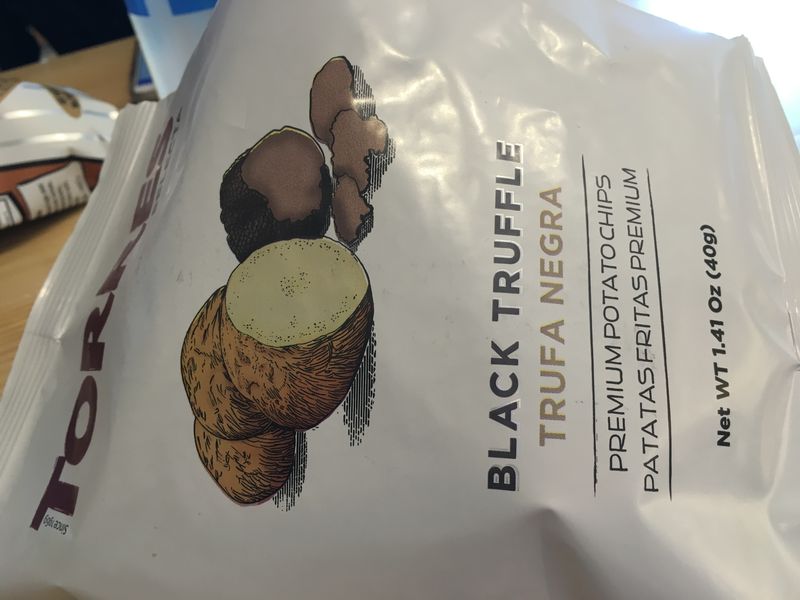 I want to invest in this black truffle potato chip company they were so good, so good.  Maybe I was just really hungry. 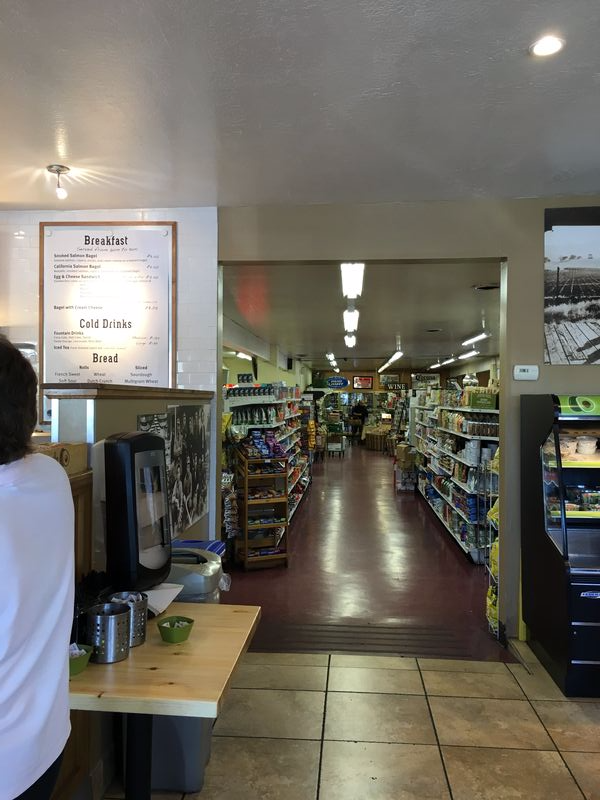 The deli was also just that, a simple deli with a grocery attached.  Who knew such glorious little sandwiches could come out of a modest deli in the middle of a small town in the center of Napa Valley wine country just down the street from the French Laundry.  For another interesting sight, we went across the street to Trident winery's tasting room.  Trident was also recommended by the somm at Stags' Leap. 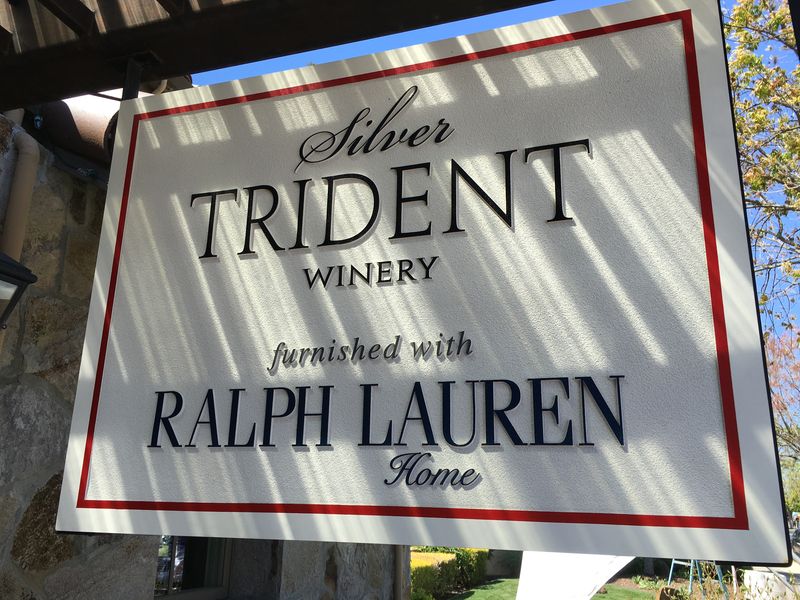 The Trident tasting room is both a wine tasting room and a Ralph Lauren showroom.  We were greeted by a strange cast of characters leading our tasting "volunteering" for the day because of the upcoming taste of Yountville. This cast informed us that everything in the showroom was for sale and that they were friends with Jacques Pepin′, own Oceania cruise line and just happened to wander to here and there to the next amazing thing with complete nonchalance. It was fascinatingly random, and apparent that this winery and showroom are the hobby of the proprietors.  Strange though, to have a Ralph Lauren showroom as your hobby with a full brick and mortar store in the middle of Napa Valley. 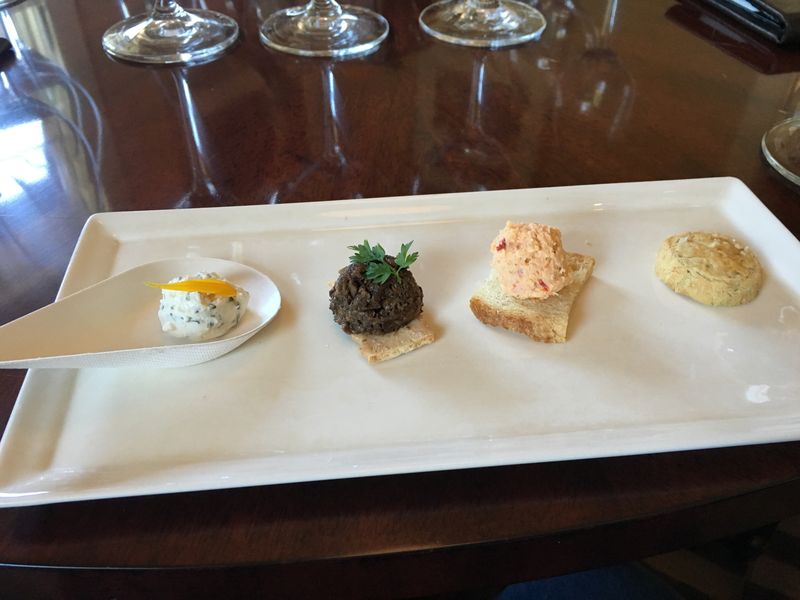 They presented us with this little set of tasty bits to pair with the wines – created by a James Beard Award winning chef, who also just happened to be their friend.  One of the tasty bits was a pimento cheese spread with smoked paprika that was quite lovely with the Cabernet Sauvignon. Talk about a meeting of the high and low brow.  It was favorite and wins the surprise pairing award in my book.  After our curious encounter with wine and furniture hobbyists we attempted a tour of BV, the longest continuously producing winery in the valley – for their museum of Napa history (not their wine because it is not good). We failed, but made reservations for another day then went to check out a couple other unmemorable places. 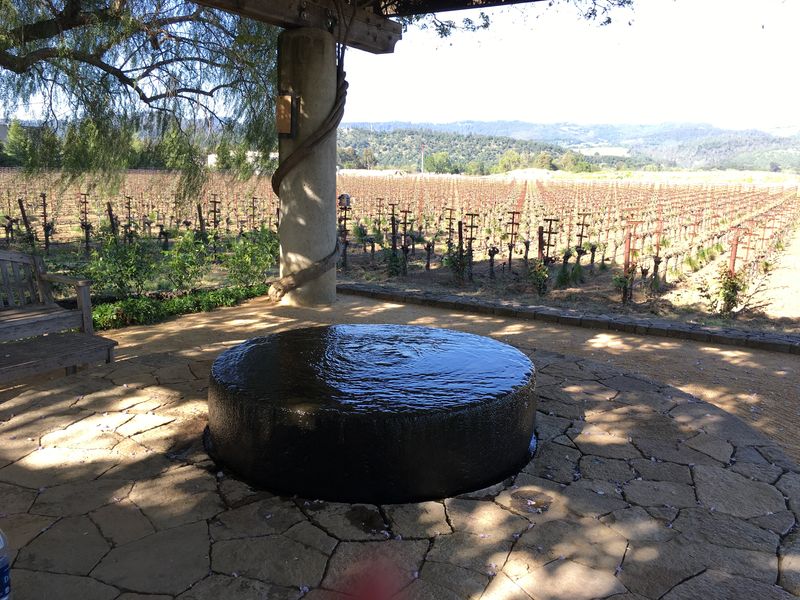 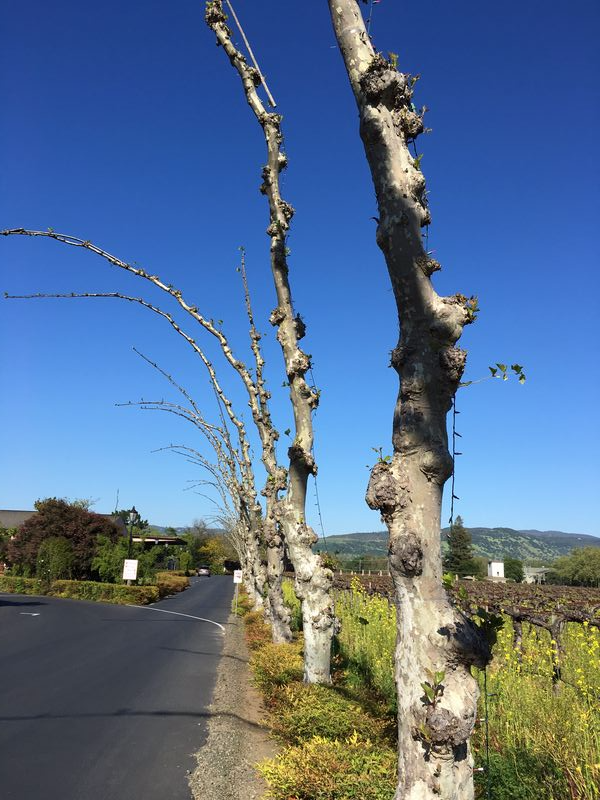 Then we saw this bank of trees as we were going down the wine highway, and we wondered what the trees were, as these trees looked like giant wine vines.  It turns out they were Sycamore trees specially pruned into a wine tourist catching spectacle. It totally worked on us, because we loved the trees, and got sucked into a tasting. 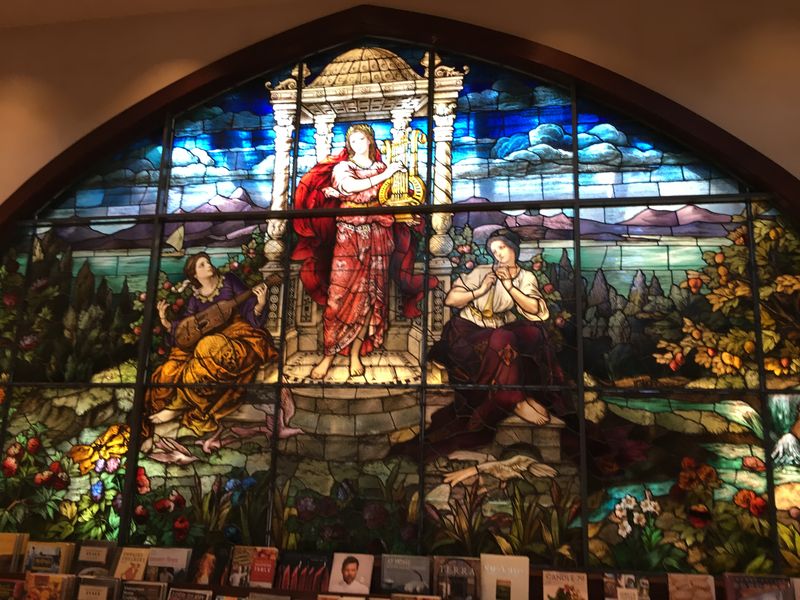 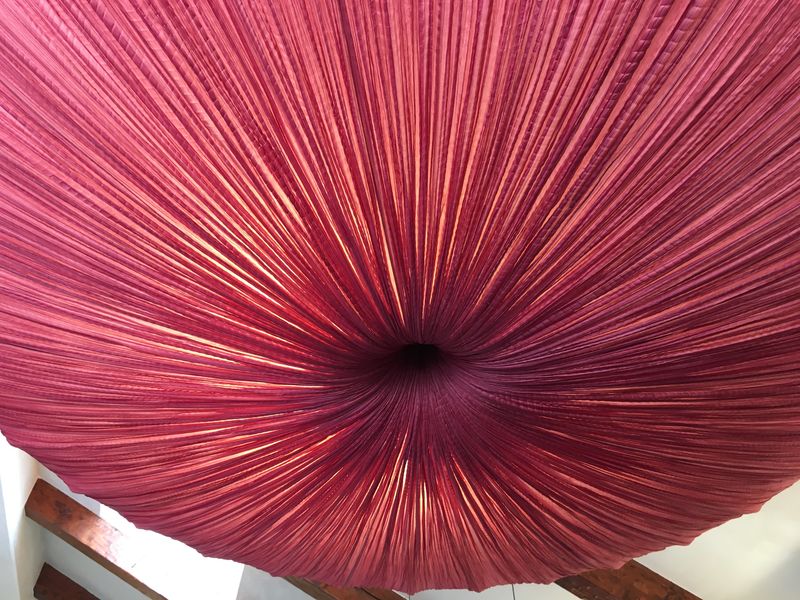 We found out, that despite the giant sphincter on the ceiling, that their wines were quite good and reasonably priced so we chose to have gratitude for Peju's creative landscaping for bringing us in to find a diamond in the rough.  Then, suddenly, the day was gone and it was time to catch our reservation at Redd in Yountville. 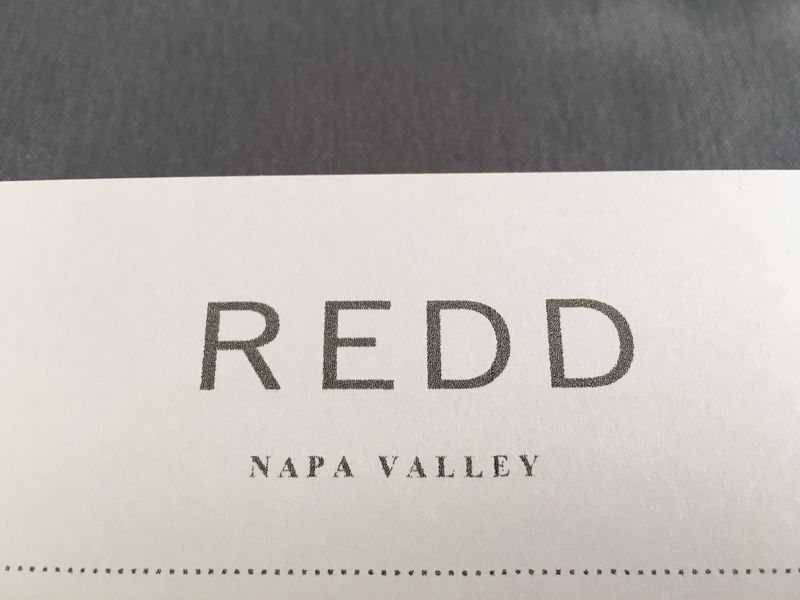 We chose the tasting menu in part because it was a deal.  To choose individual plates from the menu we would have spent more and got less so we let the kitchen choose for us.  The interesting part of this tasting menu was that they had different items for each pairing of individuals at the table.  So two of us experienced one tasting menu, and the other set experienced another. But we shared so everyone got to try 8 dishes and 8 wine pairs. 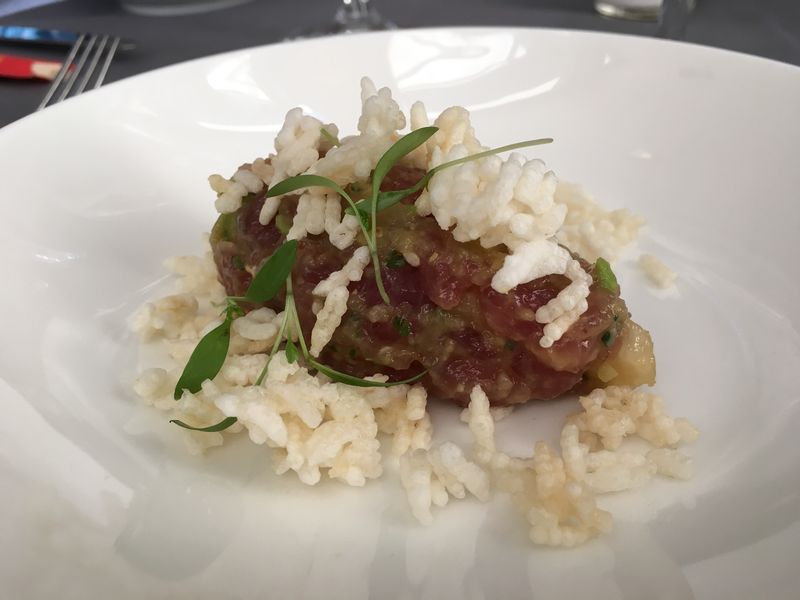 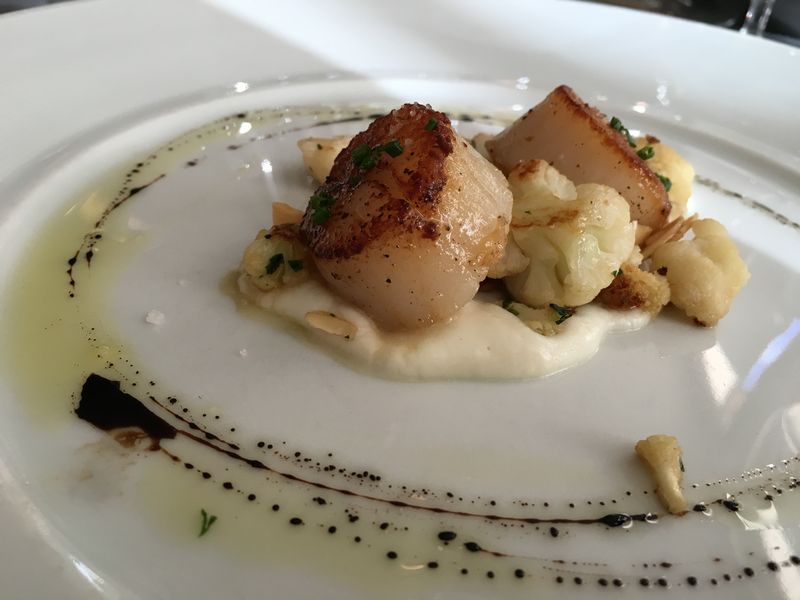 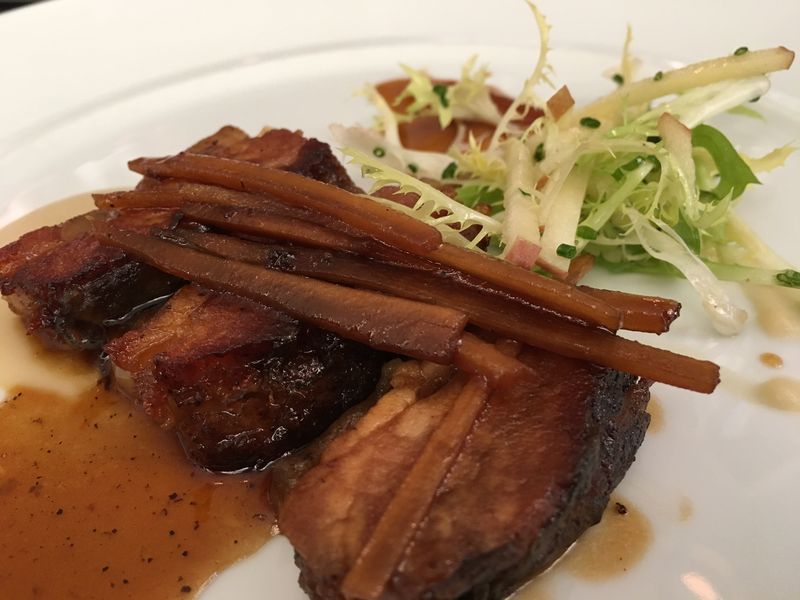 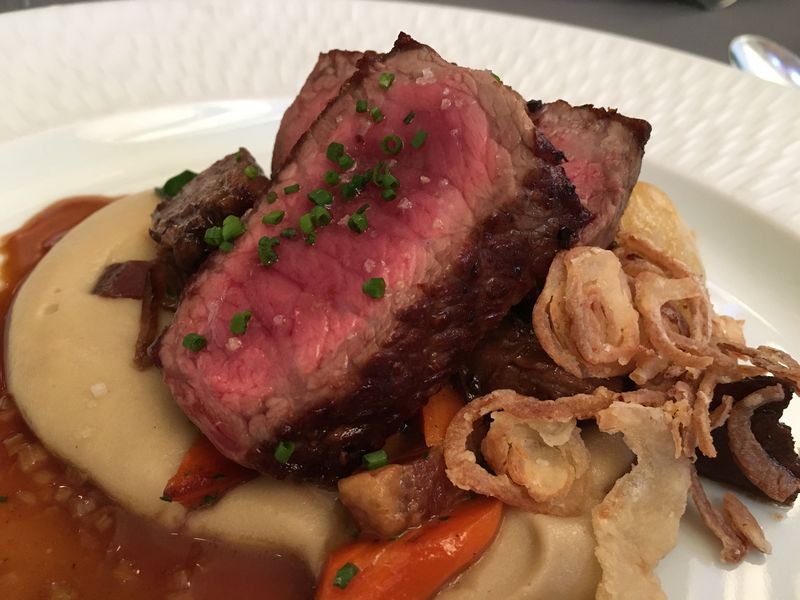 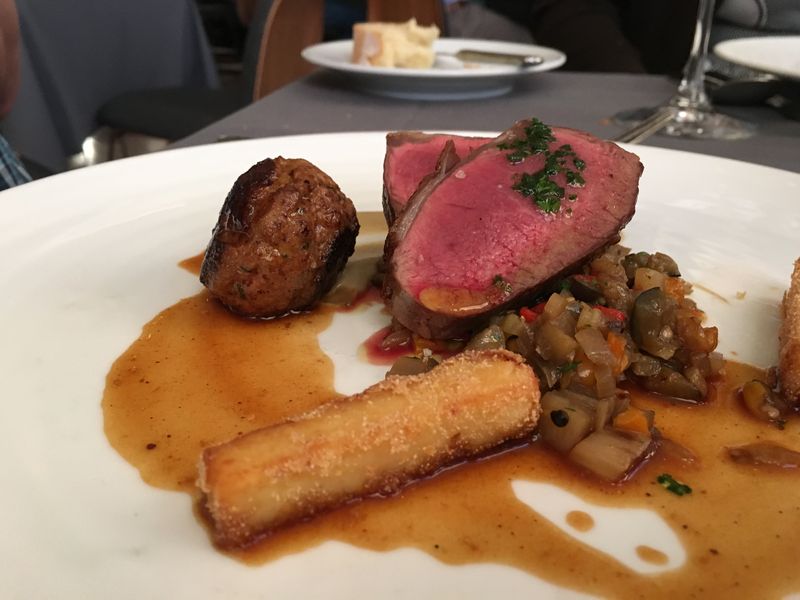 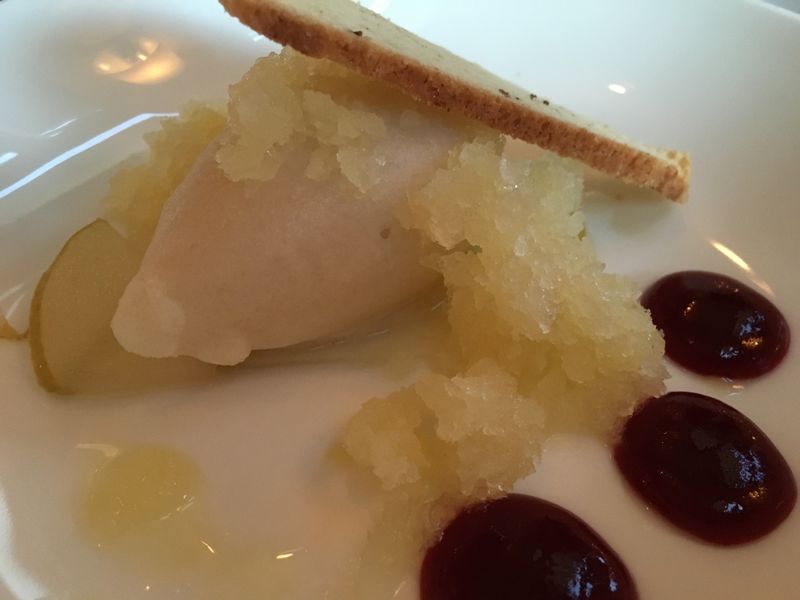 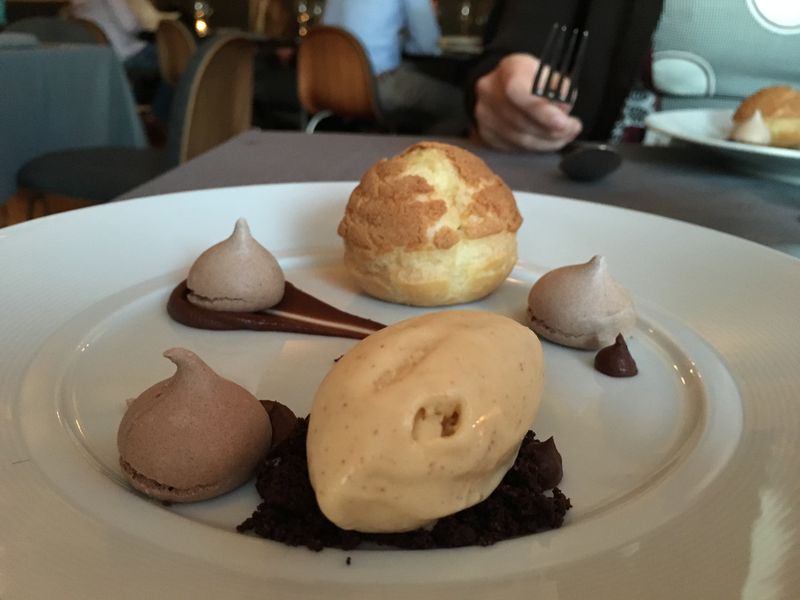 On the whole Redd was a solid meal from a fine dining perspective with a very predictable cadence to the tasting menu.  My favorite dish was course two with the fish and clam coconut curry because it was the most interesting both flavor and texture wise – it had every texture from chewy to savory bits, to melt in your mouth. Its flavor went everywhere from light ocean and coconut to the fields of umami when you found a bit of the cured sausage in the sauce.

My least favorite part, of which I was very aware when presented with sea bass, was the absence of ingredient source.  I knew going in that this restaurant was not a Farm-to-Table, commitment to local producers, do not eat endangered fish sort of establishment.  But the complete lack of mention of how the food got to the table in any materials made it as those problems do not exists and the food choices of the privileged (I'm including myself and my table in this category because we have the privilege to choose to eat at fine dining establishments) have no bearing on them.  It is a white tableclothing, so to speak, of the ethics of food choices and the impact our choices have on the world. I don't know why I assumed that those features I find in Portland, Vancouver, Minneapolis, Charleston, Toronto foodie destinations would be present in California (I don't expect them in Florida, for example) but in this case specifically there was a complete void where food sourcing could have been part of the conversation. 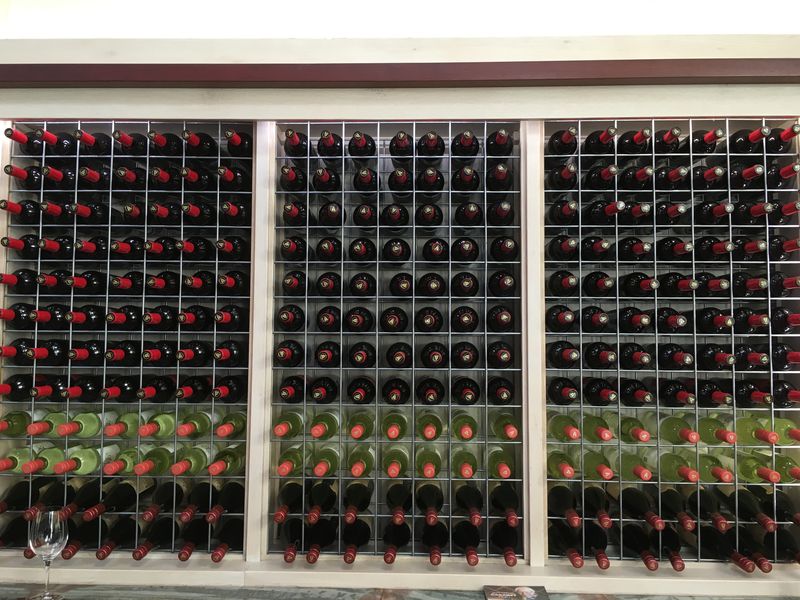 The wine was of course notably local.  But I recognize that I cannot take some sort of moral high ground with my food choices. I just flew to a different state specifically to eat at a restaurant just because it is world renowned and many famous chefs say it is the best meal of their life. This is not a choice based on sustainability, and most definitely not exhibiting a lack of privilege. I have no idea how the French Laundry sources their ingredients, nor have I even done that research, I might now that I'm writing and thinking about this.  All Portlandia jokes aside, I did not ask our waiter at Redd where the cow that became beef on my plate grew-up, nor if the yellowtail was line caught.  It was just an observation of this particular space, and yet another one of my assumptions challenged in what was a beautiful day in Napa Valley California.  I have gratitude that I had the means to participate in such an exploration accompanied by good people as devoted to the quest for flavor as I. 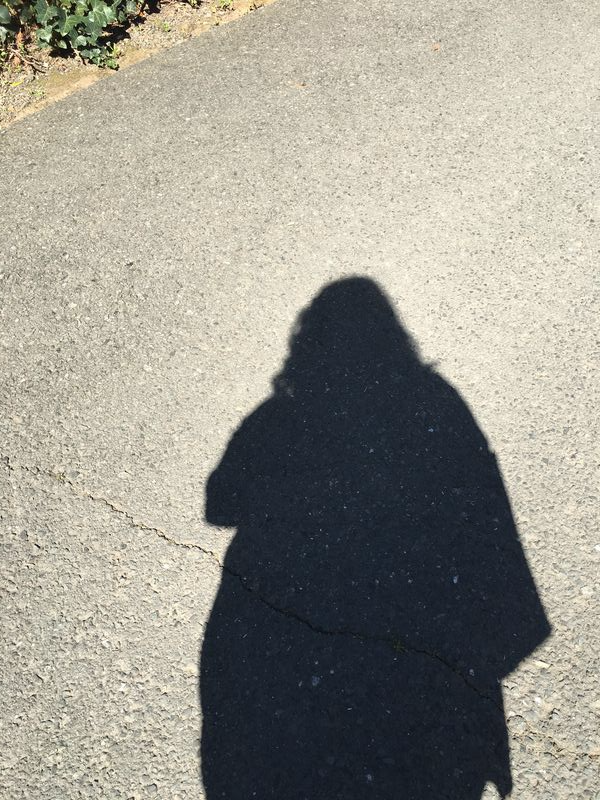