It is full on summer in Washington State and that means its is wine and vineyard touring season (it is always wine tasting season for me). My good friend Diana and I signed up with Wine Yakima Valley for their annual vineyard tour this July to get an in-depth education from growers and wine makers about the relationship of wine to its terroir. 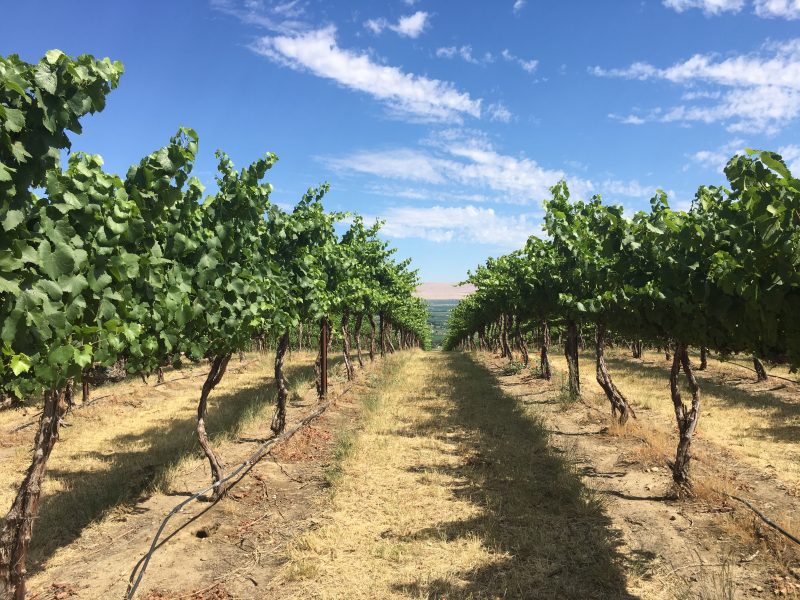 We left Seattle on a Friday to beat the crowds driving East and get in a little antique and fruit stand shopping.  In our travels we found some giant Red Wing Ceramic crocks, apple crates and pickles – it was pretty productive for not trying too hard. I only bought the pickles but got a promise from little old lady working the antique store in Cle Elum that the 15 gallon Red Wing crocks do not go running out the door. 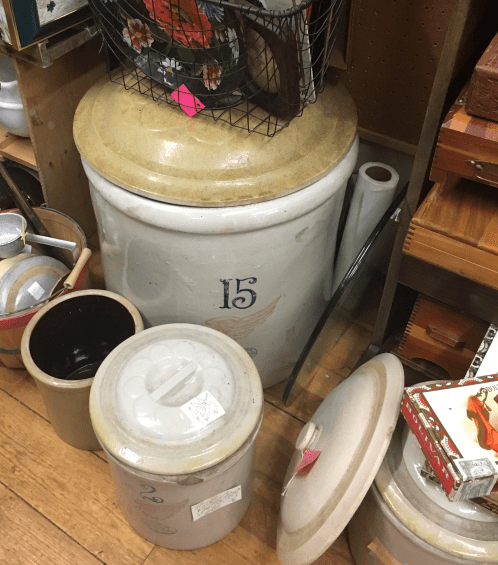 Our restrained shopping earned us a snack and a glass of bubbly at Trevari Cellars just outside of Yakima. Trevari, for those unfamiliar, makes only sparkling wine – some of which has made it as far as White House dinners. It is not champagne, nor made in the style there-of, but it quite good. 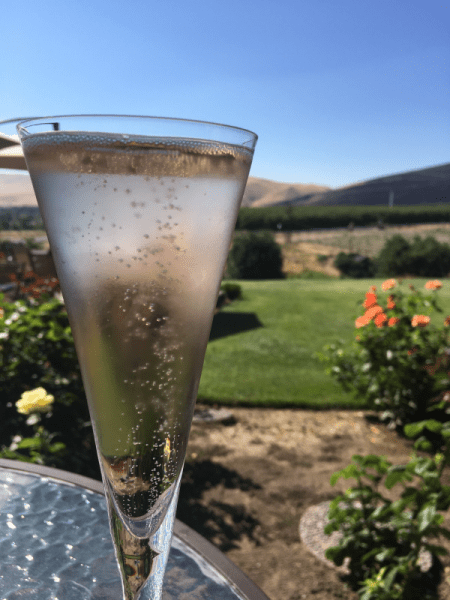 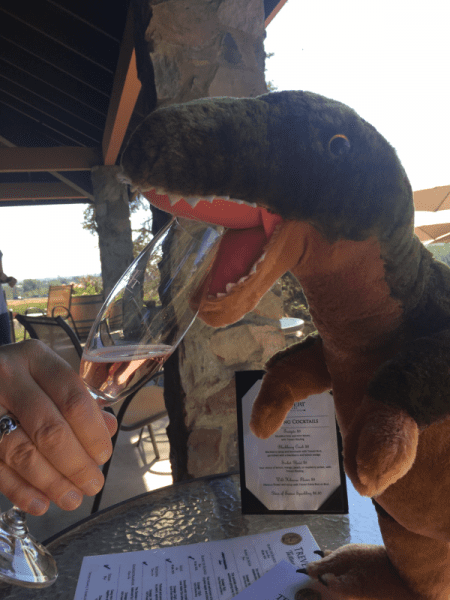 Mr. T. Rex got some too. Then we headed for some Friday tastings around downtown Yakima and a little dinner. A local winery recommended the French place where we could bring a bottle of their wine with no corkage fee. 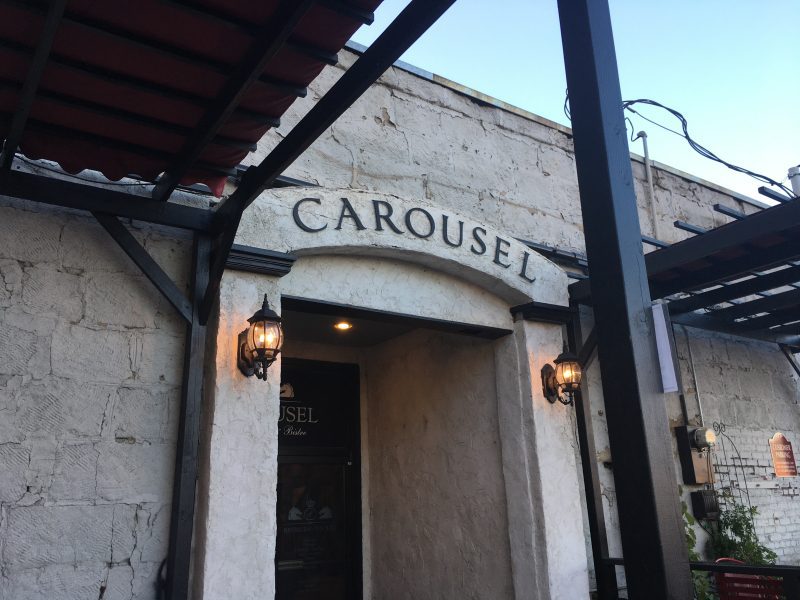 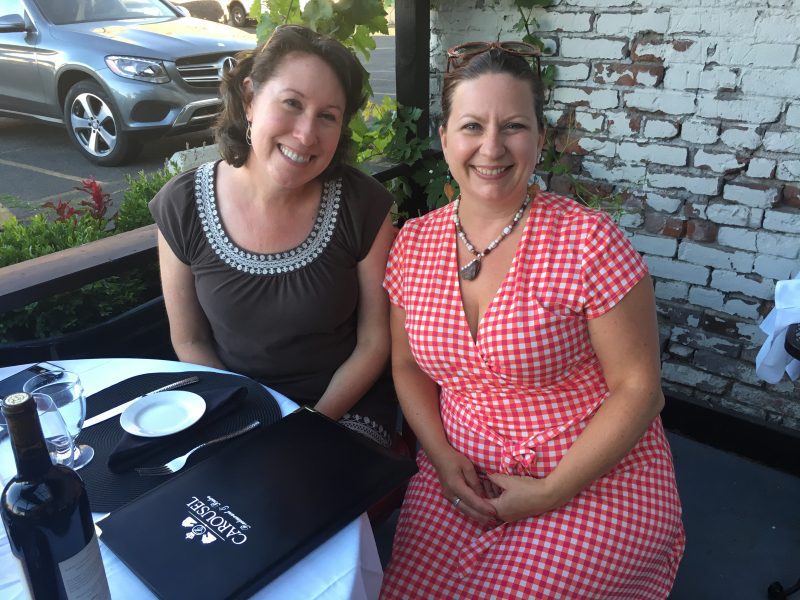 We look so happy for the 90 degree weather we were sitting in at the time. But we still ordered the soup and few other things of interest, including frog legs. 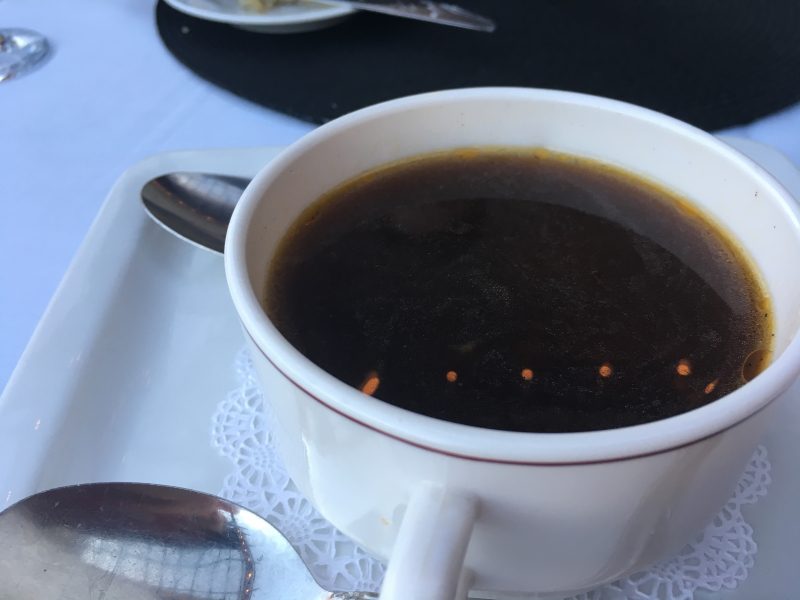 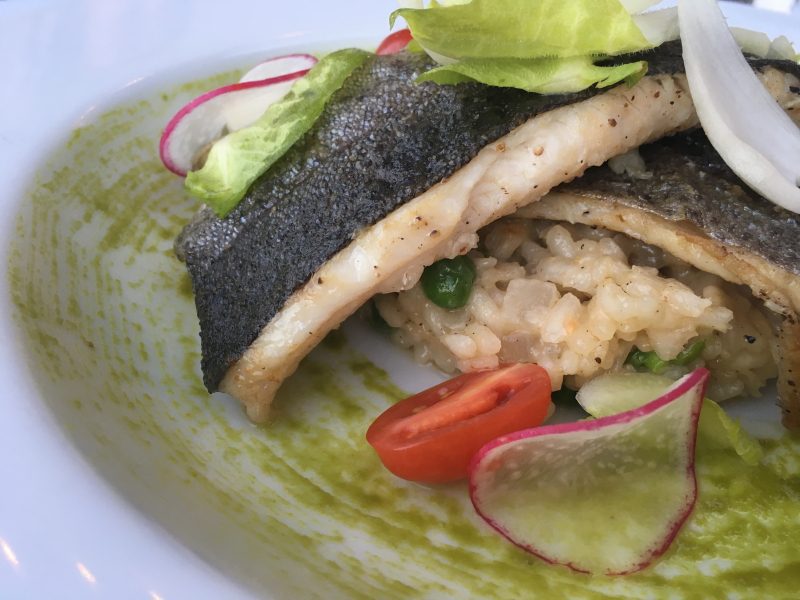 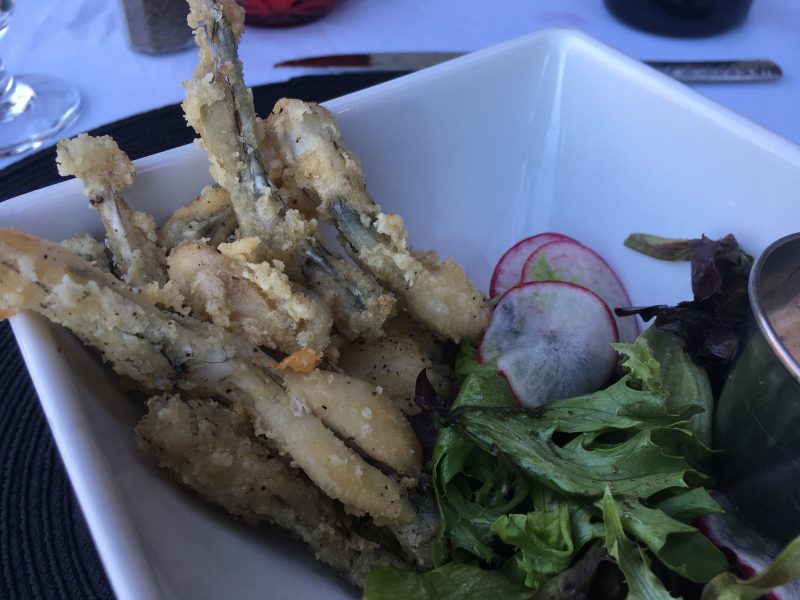 We ate ourselves quite full and satisfied then headed back to the hotel with to-go boxes in tow for an early night as the vineyard tour started bright and early. 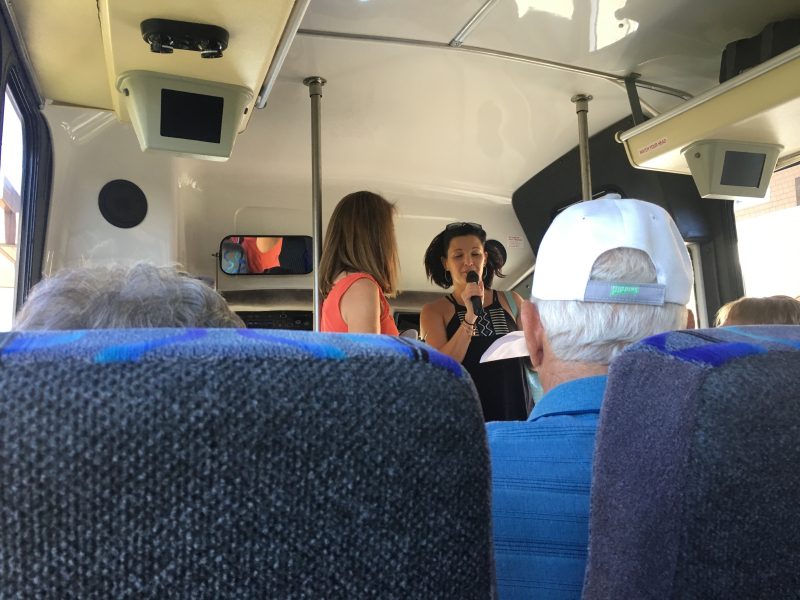 The next morning a very large wine bus met us in the parking lot of our hotel. It was filled with many other individuals involved in Washington agriculture who were "curious" about grape growing, as well as just a couple other tourists like us – including a couple wearing Wine-o-saurus t-shirts. Our main tour guide remembered me from two years prior and gave me a "Welcome back Angel!" apparently, I am memorable. 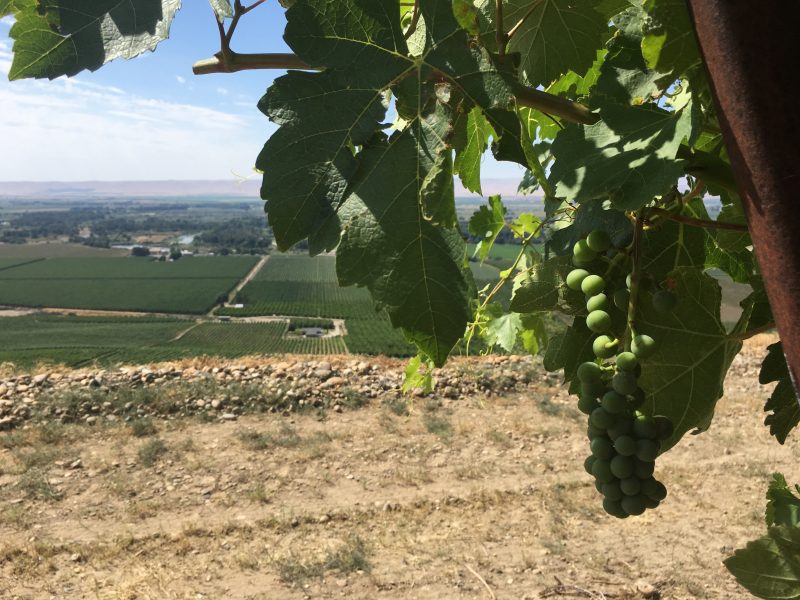 Our first stop was Snipes Mountain just outside of Sunnyside and Roskamp Vineyard where Mike (the grower) and Co (the winemaker) lead us through a geology lesson about the Yakima Valley AVA, and an explanation as to why there were river rocks at the top of a "mountain."  I picked up a few lovely rocks and stored them in my bra as we walked around because I needed my hands to hold my camera to take this selfie and phenomenal view shot. 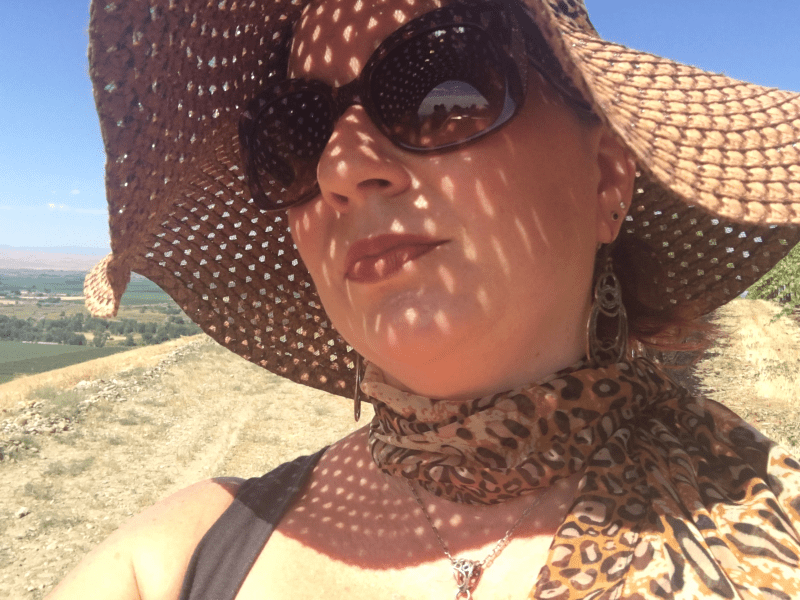 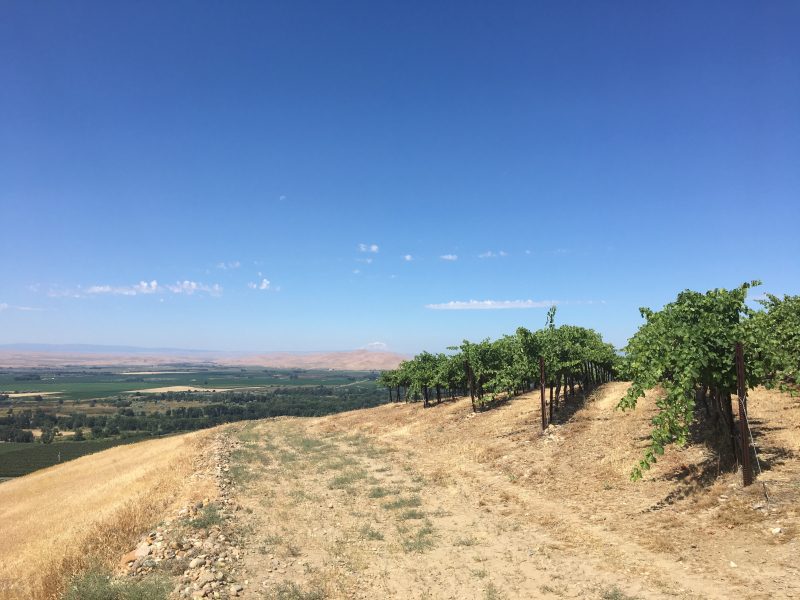 You can almost see Mt. Adams in the distance here.  You can definitely see the ancestral Columbia River rocks on the left side of the road. Mike and Co noted that "It was a real humdinger to plant these" vines you see perched on the side of the hill, because the soil was so rocky and hard. The poor quality of the soil makes for great wine because grapes need to struggle. Good wine flavor comes from the skin – so you want smaller grapes (as the smaller the berry the more skin), and struggling vines produce smaller grapes.  Co Dinn, winemaker, is not struggling, however, to make really good wine. 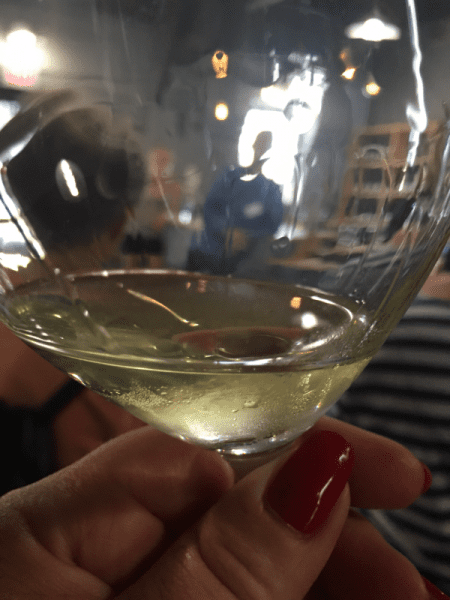 His new tasting room for Co Dinn Cellars just recently opened in the old waterworks of Sunnyside, and is quite a spectacular example of reclaimed architecture – but the wine by the long time Hogue wine maker definitely steals the show. I did not know I was going to be introduced to award winning Washington Chardonnays on this day – but that is what happened. I am sold, I just wish I had a little larger wine budget to put some away in my non-existent cellar. If you do now is the time to get in to Washington wines because the industry is on the cusp of a world class explosion. 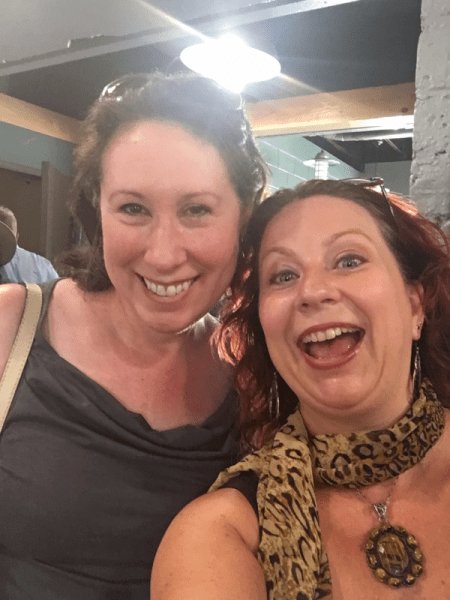 Lunch was provided by a local caterer who I unfortunately cannot remember the name of in Co Dinn Cellar's warehouse.  It included the best caesar salad I have every had (super garlicy croutons did not hurt this impression). 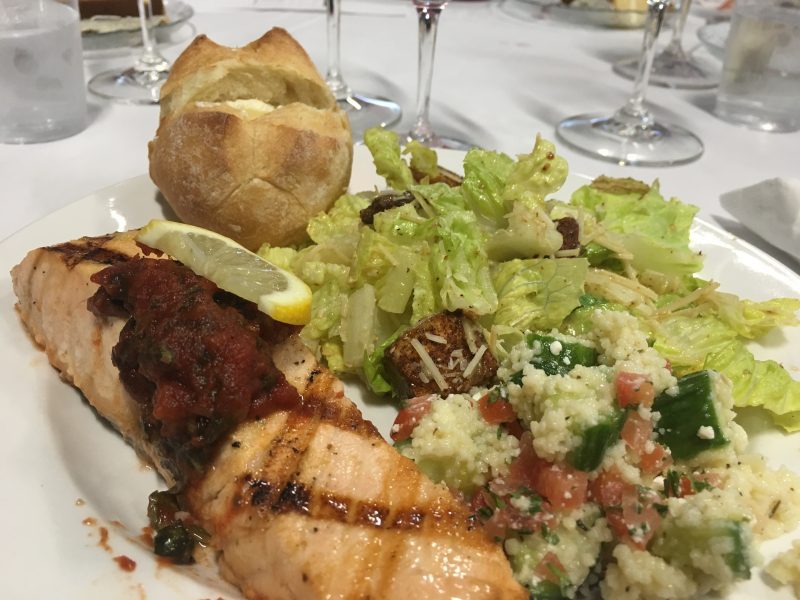 After lunch we headed for DuBrul Vineyard to visit the grapes that make Cote Bonneville wines – and meet the growers and winemaker – this time an entire family team of mother, father and daughter. Mom and Dad joked that it "takes a long time to grow a wine maker" when we were back at the tasting room. 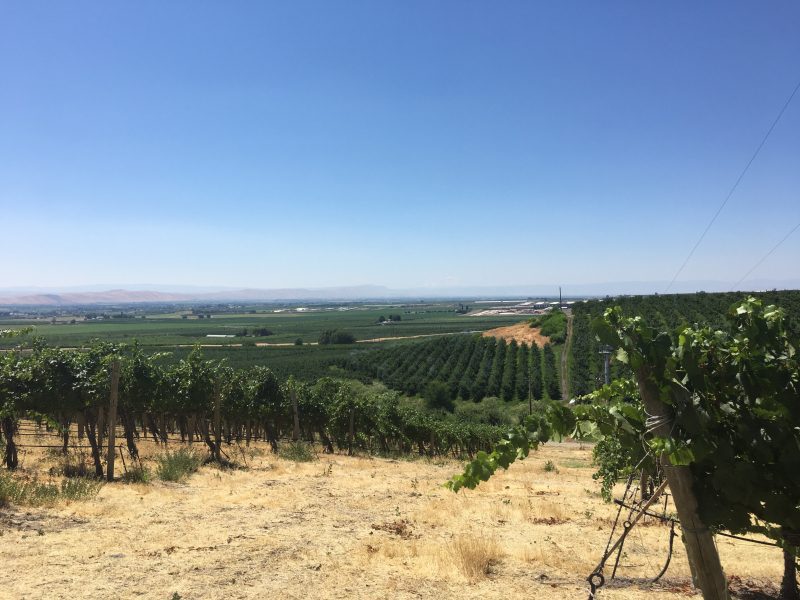 Standing in the vineyard the temperatures of the day reached a lovely 102 degrees, and there were a few folks melting into scenery. Despite the heat, we marched up and through the Cote Bonneville grapes and learned about the meaningless nature of the word "minerality" in the wine making industry. 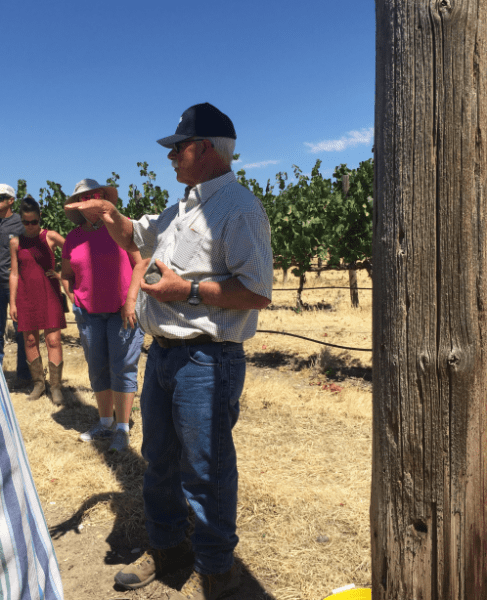 Somewhere around here I found the rocks from the Roskamp vineyards still in my bra. They were a beautiful new color now that they were damp with sweat. If I had taken notes at this point I would know a lot more about wine, but instead I concentrated on staying upright, drinking water and dreaming about an air conditioned tasting room with cold sips of vino waiting for me. 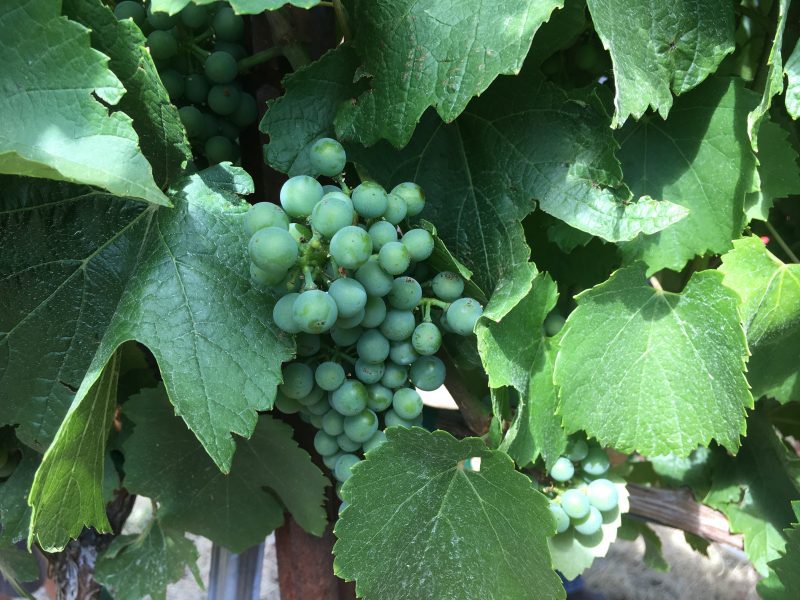 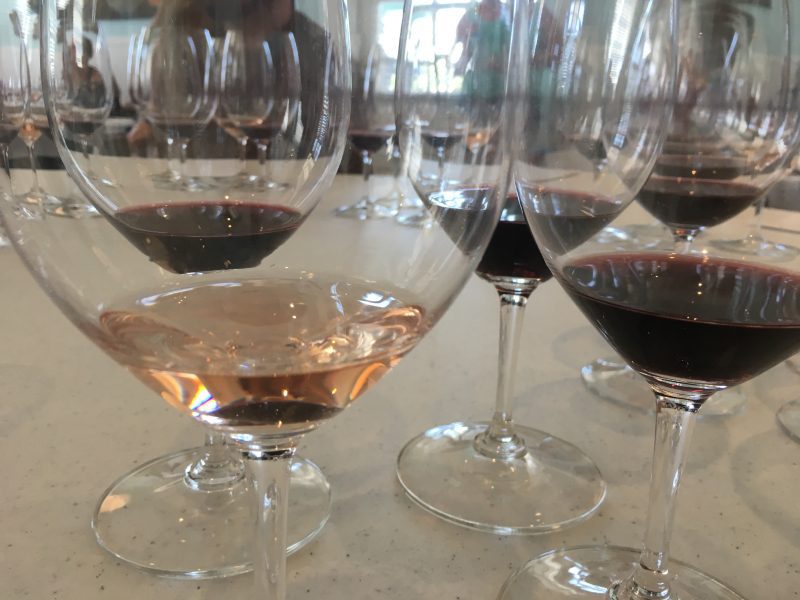 The moment of tasting finally came, and Kerry the winemaker explained in great detail how the Chardonnay is made – I couldn't understand a lick of it but the Cote Bonneville Chardonnay is one of the best Chardonnays I've ever tasted in Washington (and the world). My opinion is held by many others who have better pedigrees to judge wine than I (although I have tasted a lot of Washington wine), including the judges of Seattle Magazine's Best Wine's of the Year. 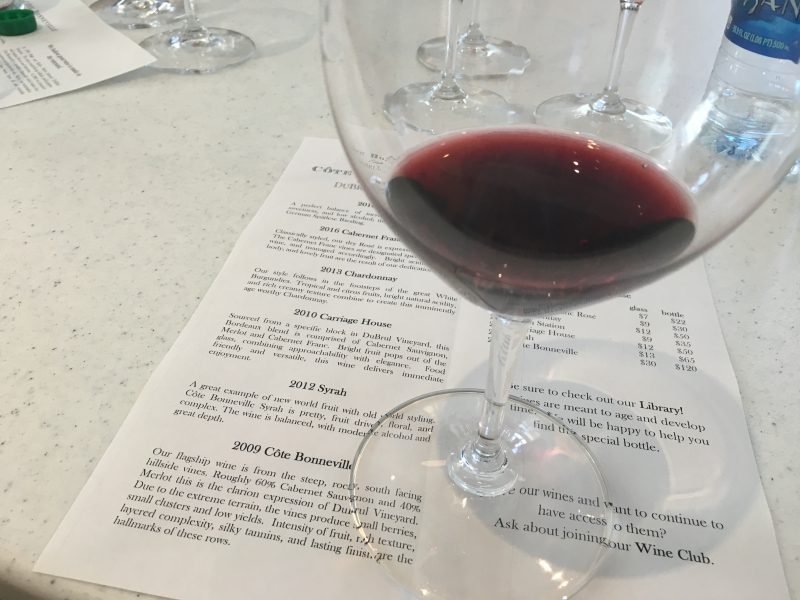 Their reds were also very good – but the day was so hot it was hard to even think about them – but this lovely 2009 Cote Bonneville flagship was tempting even with the 3 digit price tag. I chose to purchase the Chardonnay and drink a couple years from now. 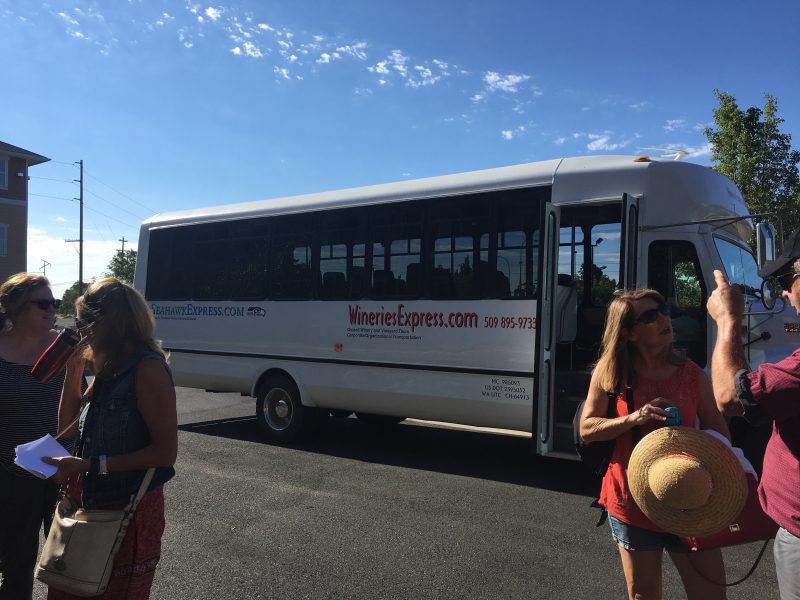 After our purchases we all climbed back into the wine bus and headed back to our respective places of rest or return. Diana and I debated our dinner/evening options after a little bit of air conditioning and determined that going to a movie in the new Yakima dinner theater was a great idea. We laughed our way through the new Spiderman movie then I attempted to complete my memoir class homework and read about casting rune stones, but instead I just fell asleep in my chair. 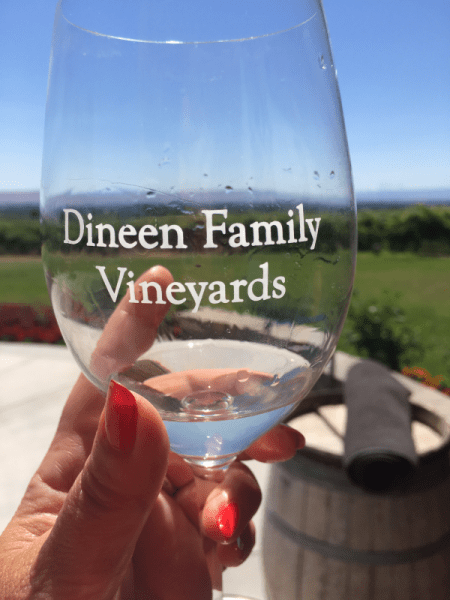 Sunday brought us out to Zillah to try a couple new places and visit old friends. I love this example of horse power we encountered at Dineen Family Vineyards. 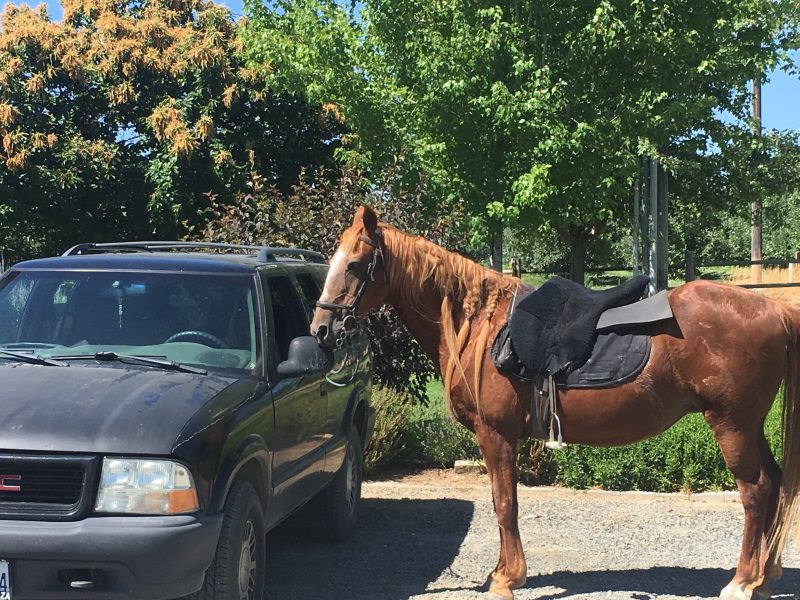 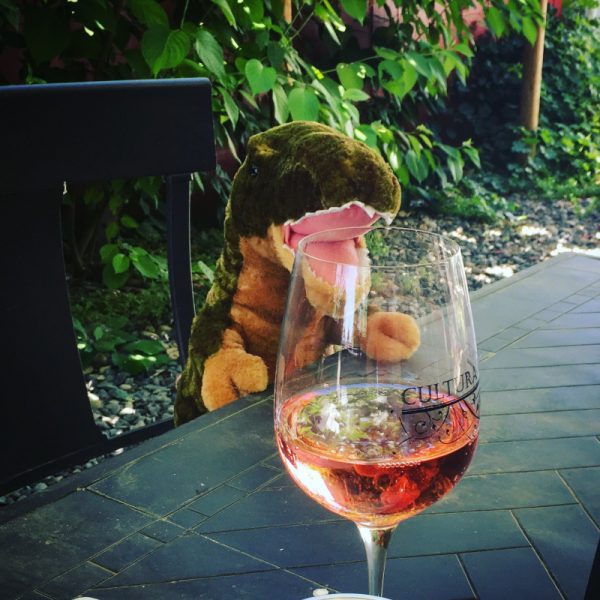 Mr. T. Rex enjoyed his annual picnic at Cultura, along with a glass of their rosé. This year's version pairs really well with jalepeno cheetohs. 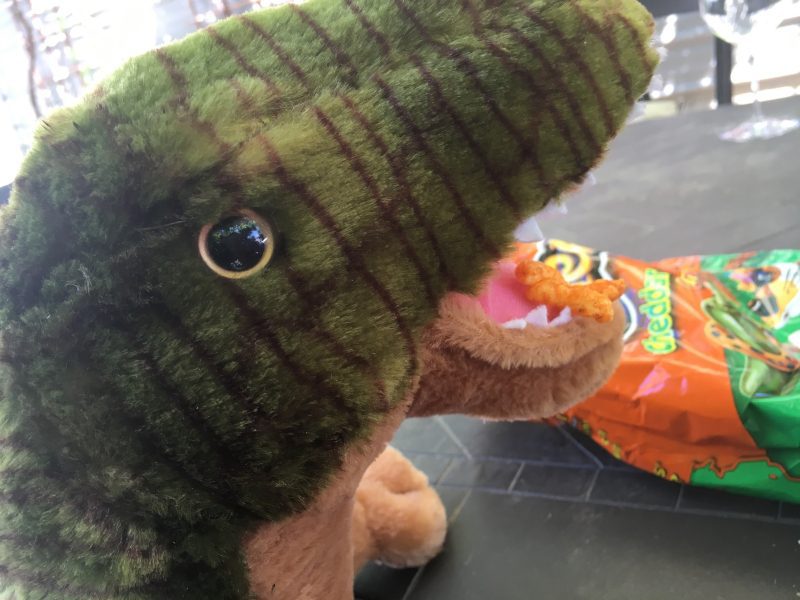 After our visit at Cultura we packed up the car, ourselves and our purchases and headed West. We did not beat the crowd this time finding ourselves in roughly 5 hours of traffic to get back to Seattle.