It was a hot Sunday on San Juan Island – and it just kept getting hotter.  We started our day at the our cottage in the trees drinking coffee in the shade then ventured out to the blacktopped streets of Friday Harbor in search of breakfast.  It was only 10am and it was already blazing. 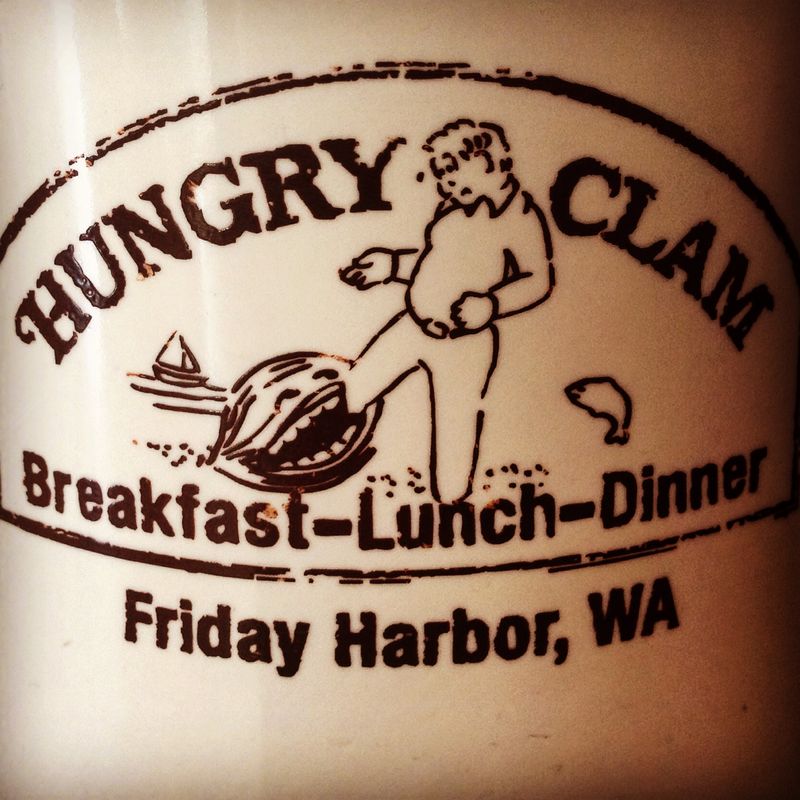 We found the Hungry Clam – a place of breakfast-lunch-dinner overlooking the already overwhelmed ferry terminal. The Hungry Claim is a small town diner with boothes dedicated to people like "Big Rod" and the locals all know each other, and know clearly who is the tourist.  I ordered the chicken fried steak because this seemed like the perfect place to order such an order.  I was right because it was good.  Really good. 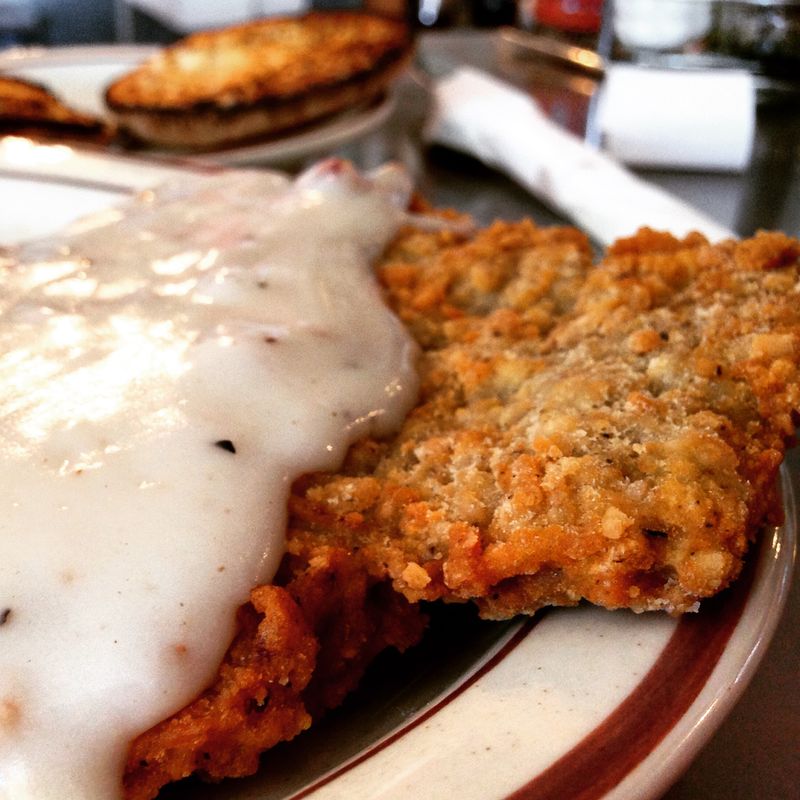 Evan ordered something with ground beef in it and put ketchup on it.  I didn't try it but it seemed appropriate for our circumstances. 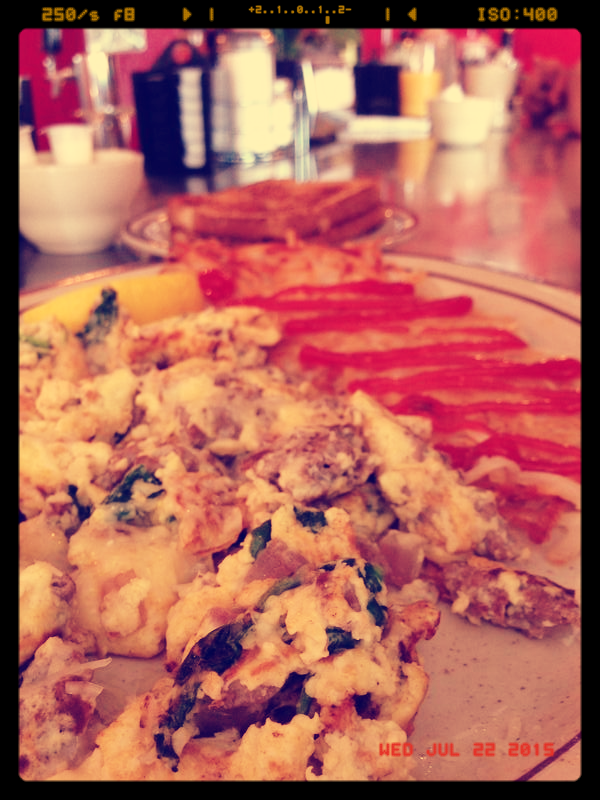 After breakfast I attempted to engage with the ferry terminal staff to see if there was any possible way we could leave the island before our 6:30pm reservation.  I also wanted to see how the whole ferry thing worked because unlike any other ferry terminal I had ever seen this one appearred to have a single staff member and a ghost voice coming out of the speaker and no one else running the show.  There was no one in the office except a wad of confused tourists who had not hung on to their return trip reciept, and wanted to make a reservation by phone.  I kindly instructed them that they needed that reciept and reservations were only to be made online.  I am not sure why, standing in front of an empty unstaffed government office on a Sunday, this seemed so unbelievable to them until they called and got an answering machine. 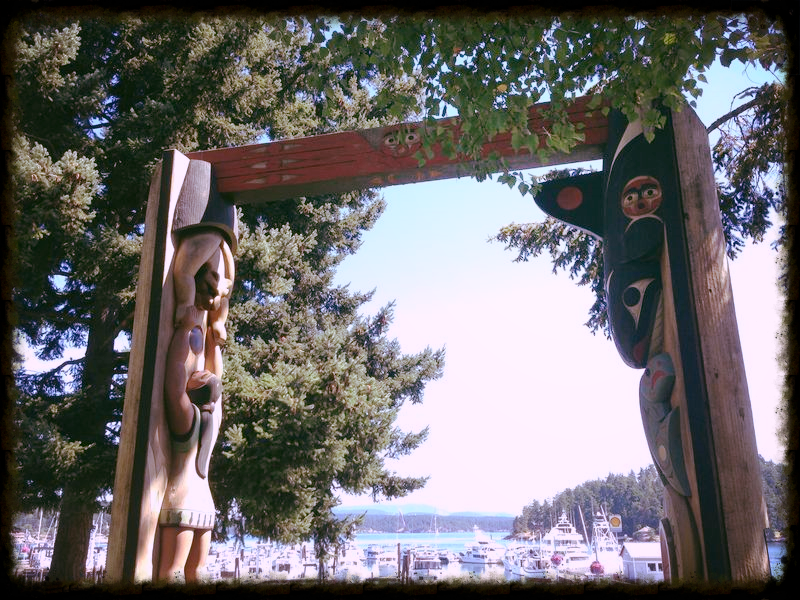 We left the ferry terminal and made our way to the whale museum.  Where I recieved an entrance card with the whale named Princess Angeline, born in 1977 upon it.  The whale was named after the Anglo name given to the daughter of Chief Seattle (Chief Sealth) the namesake of Seattle.  The woman at the entrance counter was very entertained when I shared that my name was also Angeline and I was born in 1977 as well (thus probably sharing more in common with the whale than her namesake).  A good salesperson, the museum docent also insisted that this syncronicity meant that I should adopt the whale.  Like a good Pacific Northwesterner I avoided the question as I thanked her for the self-guided tour book and said I had to go find my boyfriend who had wandered into the museum unattended. 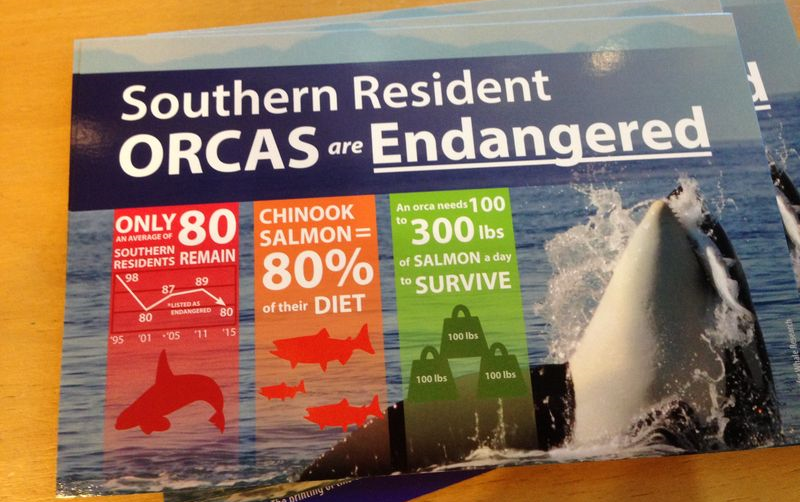 We learned inside the museum that Orca whales eat up to 100-300 pounds of salmon a day, and the scarcity of that salmon and pollution are the primary reasons they are endangered today (on top of the shooting, poaching, putting into sea world and other human shenanagins of the 20th century). 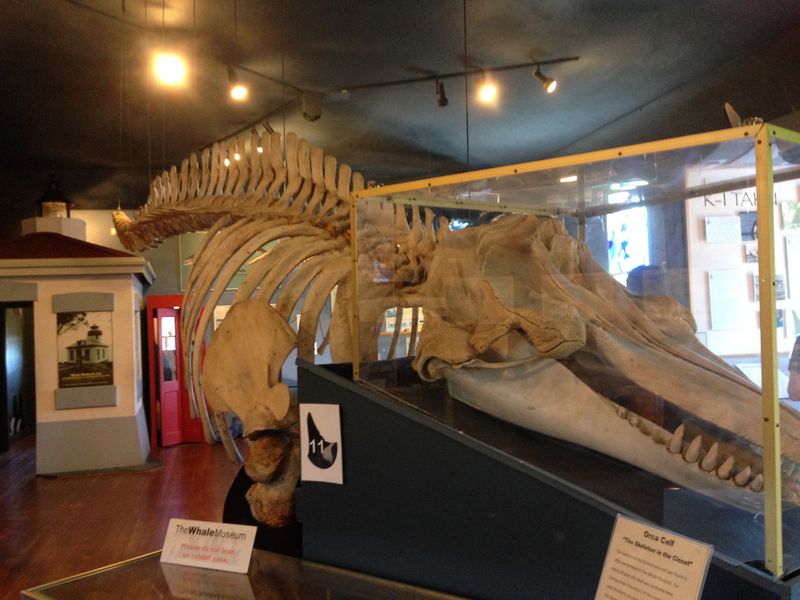 After the educational journey through the whale museum I was ready for a journey for my tastebuds – so we drove down Roche Harbor road to the San Juan Island Winery.  A tiny little winery growing enough grapes for two island vintages and 18 other wines made from Washington grapes grown elsewhere. 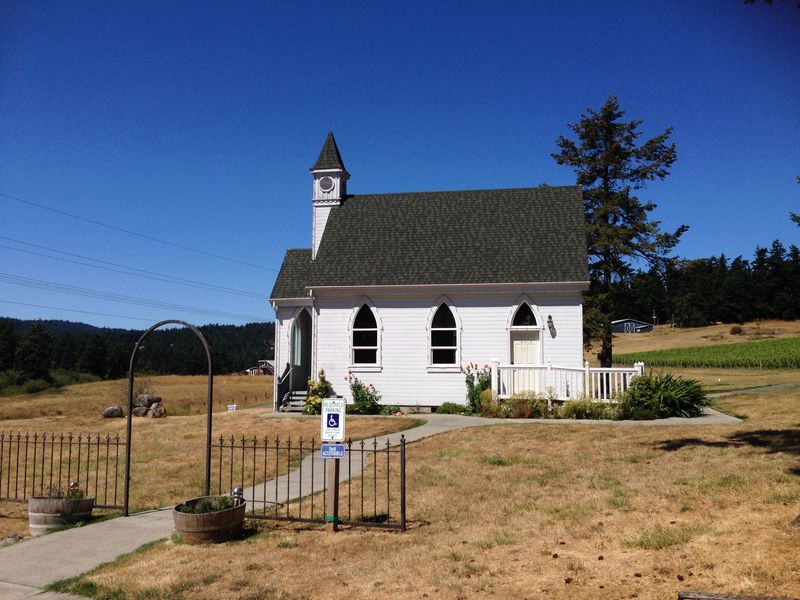 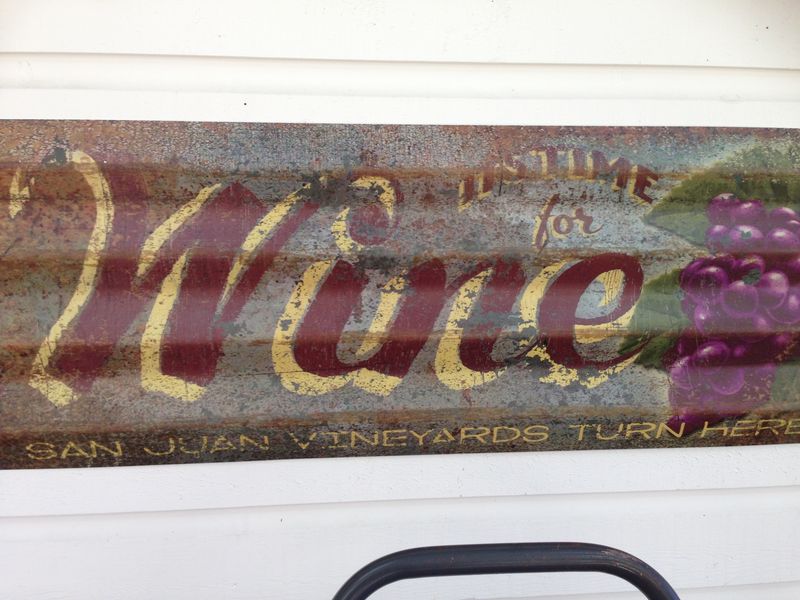 We did a tasting and learned about the camel that lives on the island.  We had driven by it the day before on the way home from the Duck Soup Inn, but thought maybe our eyes had decieved us.  In fact, they had not and a camel does live just across the street from the San Juan winery.  I did not get a picture as she was surrounded by adoring fans when we drove by a second time. Our wine tasting did not take that long as our hostess did not seem that into the wines she was pouring, and you only got to try three.

So we made our way across the island to San Juan Island Distillery and Westcott Bay Cider.  Our tourist map left quite a bit to be desired when it came to detail around the Roche Harbor area, but was better than nothing as that was the GPS option.  With a little slow crawl we found our destination and a family passionate about making cider and spirits. 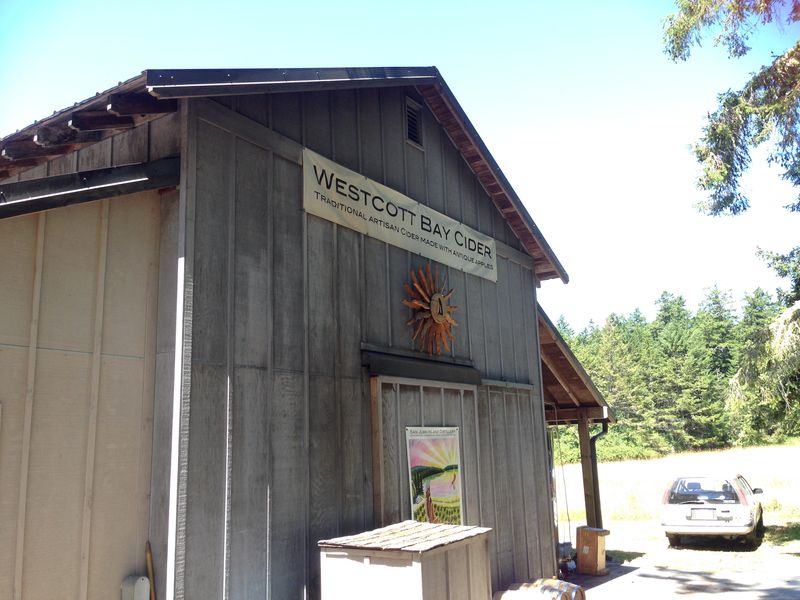 Originally there was just Westcott Bay Cider, then when the founder was tired of doing cider alone he sought a partner – he found one that wanted to make spirits out of the cider, first brandy, but then because the distilling process puts out a perfectly good drinkable by-product when making brandy, they got into the business of gin.  Very good unique gin made from Washington apples that grow right down the street.  It is called Spy Hop with an Orca on the label – look for it or order from them directly – it is delicious. 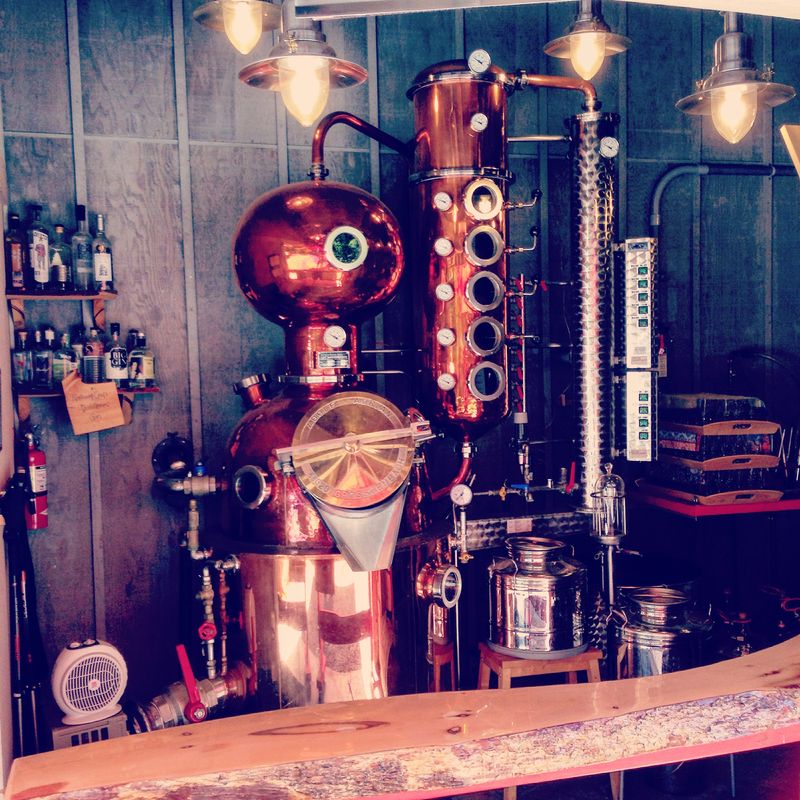 This is their still – it looks like something out of Jules Verne novel, Willy Wonka and the Chocolate Factory, or Doctor Who. 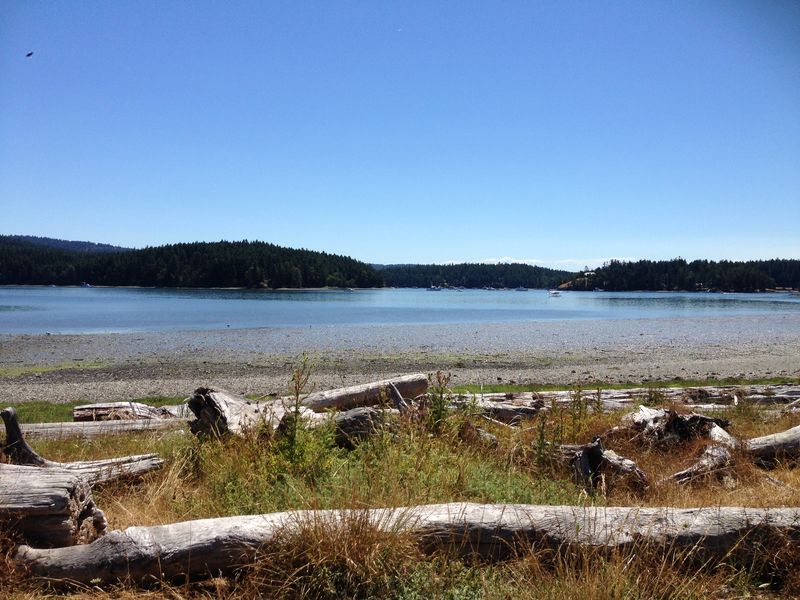 We took in the sights on the way out and decided to brave the sun for a bit to check out the sculpture park.  This shall be remembered as the place where I was bitten by many ninja mosquitos – because at the time I had no idea anything was eating me alive, but by 5am the next morning my legs were and still are a collection of itchy bumps. 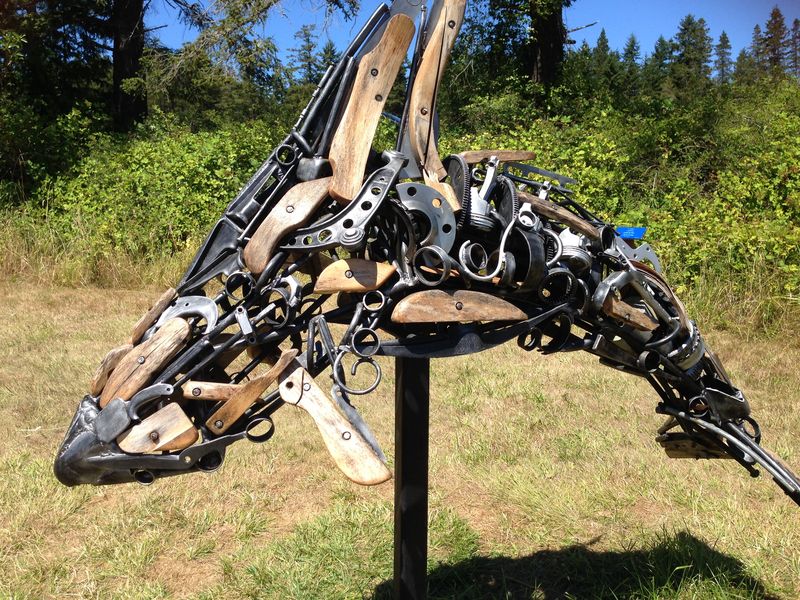 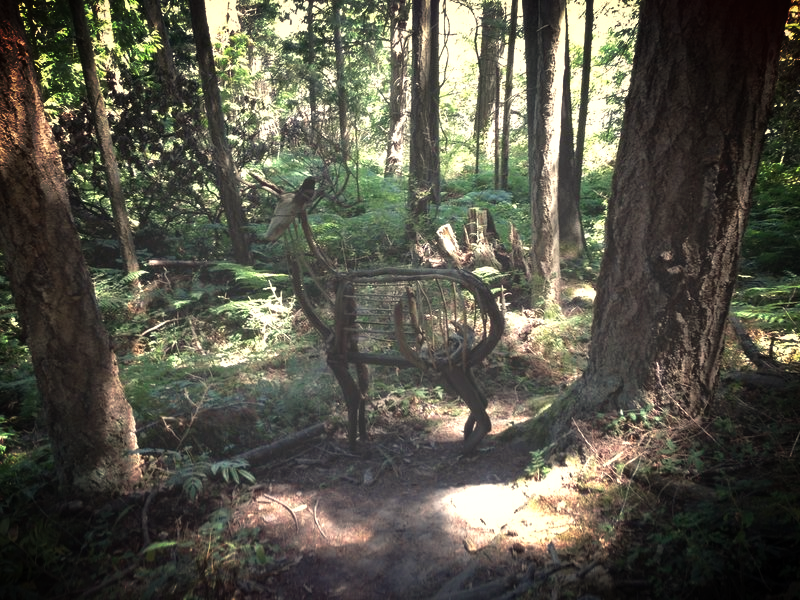 Meanwhile, we did see a few cool sculptures.  And then we got really hot.  Evan was also turning into an unpleasant human being as his overheated-ness was directly transferring into crabby-ness. 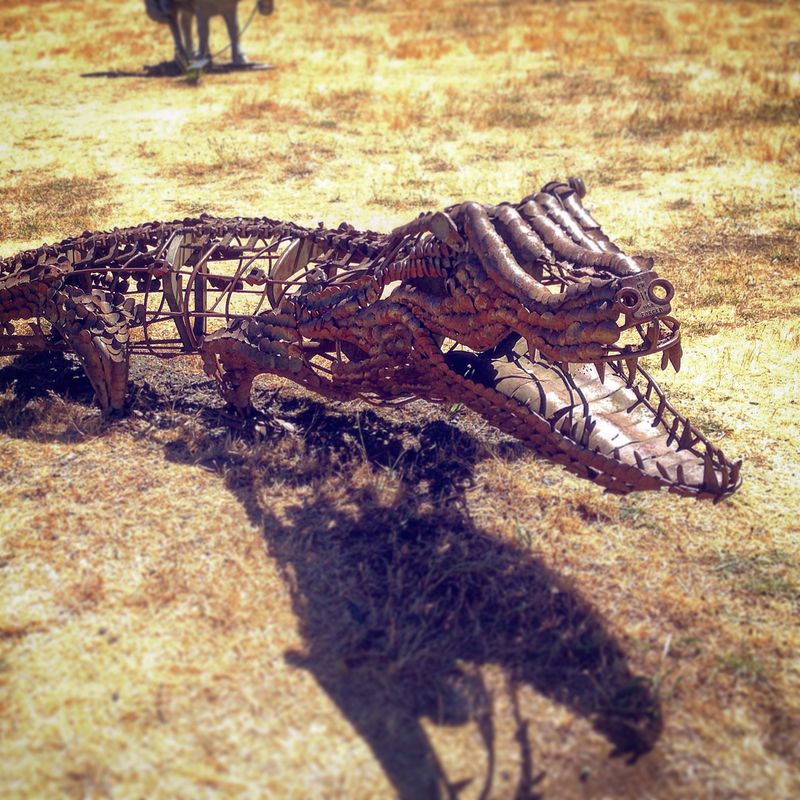 We retreated back to the trees to clean our cabin and lay about until it was closer to ferry time then we ventured into to town to park the car in the ferry line and grab our last island meal. 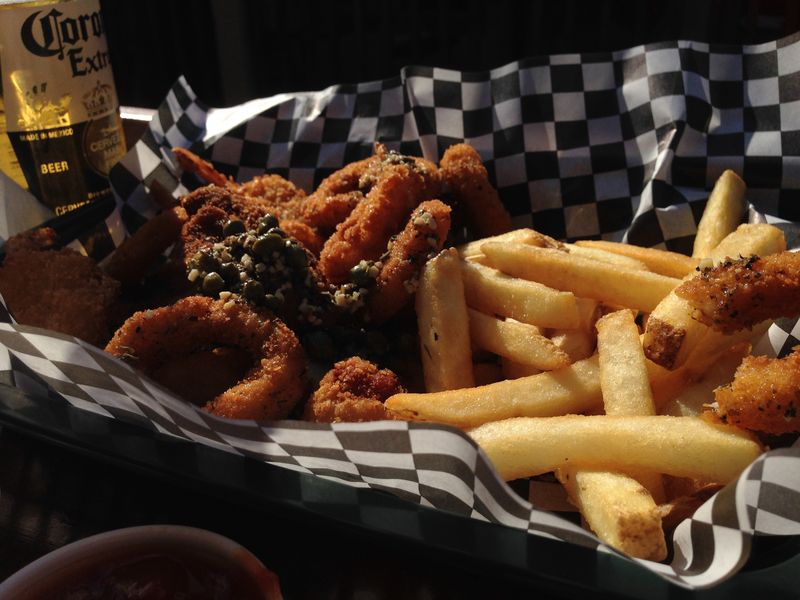 We found Friday's Crabhouse – a deck of severe chaos serving various forms of fish and chips and alcohol.  We shared a Captain's platter and the oyster special.  The oysters were so large they were literally hard to swallow, but everything else was quite good – other than my little meltdown because I was sitting in a black dress in the direct sunlight. 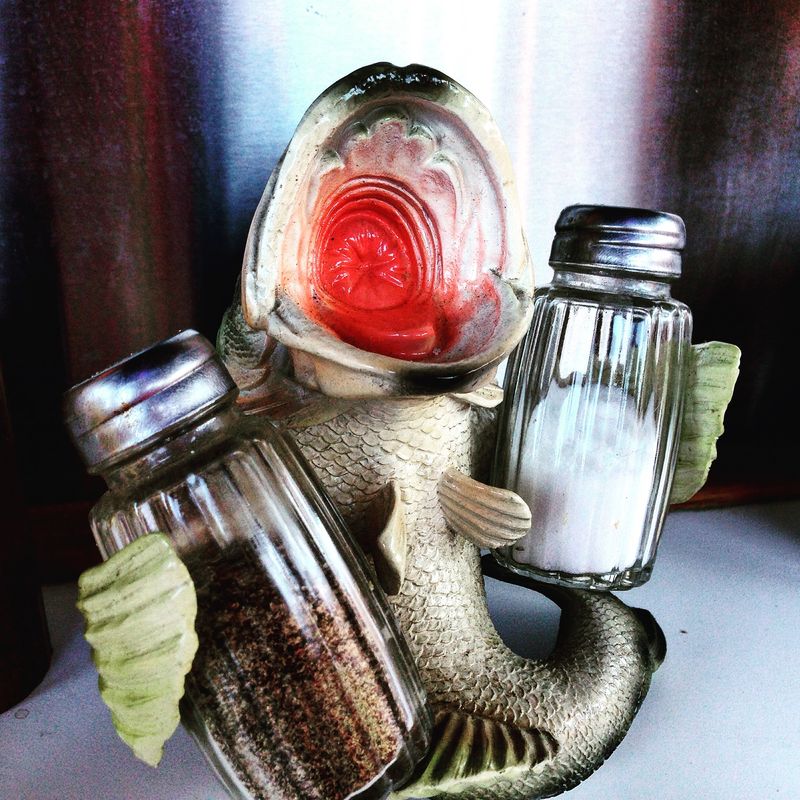 I got over it – and as Evan headed to the car to make a work call I went to the top deck to get one more cold beverage for the road. I found this sign and it was comforting in the moment. 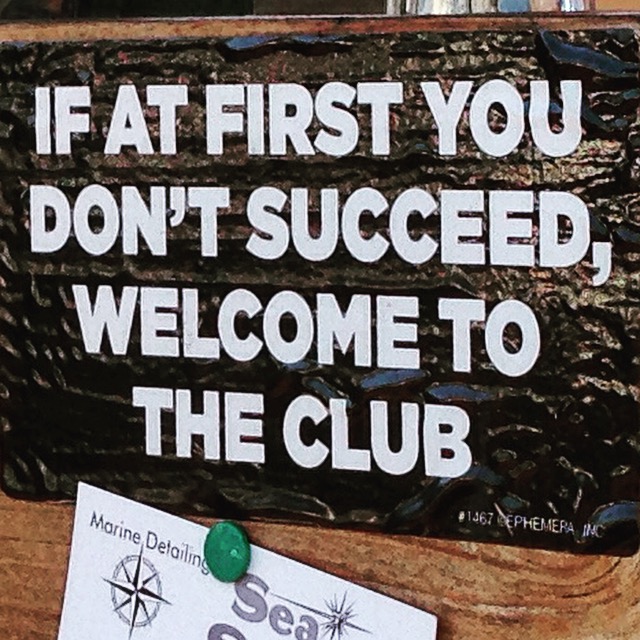 Soon thereafter I boarded a ferry toward home.  We made it home 4 hours later after construction and closed gas station adventures that shall remain nameless.  I believe this bird knew what was up before we left. 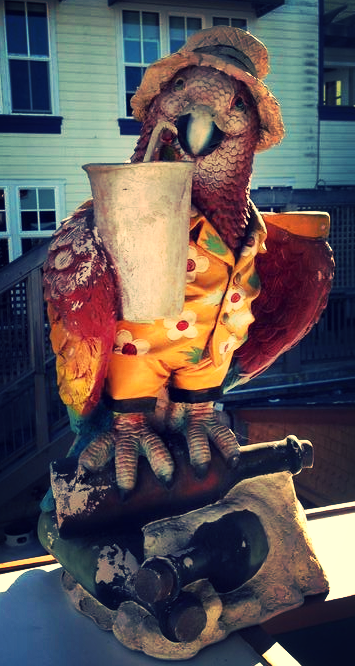