It is officially autumn.  With autumn comes pumpkins and in Washington, apples, apples and more apples.  Just this past weekend I was in Tieton and Yakima – two towns in the heart of apple country – so I brought home a box of apples to eat and make all things apples with. 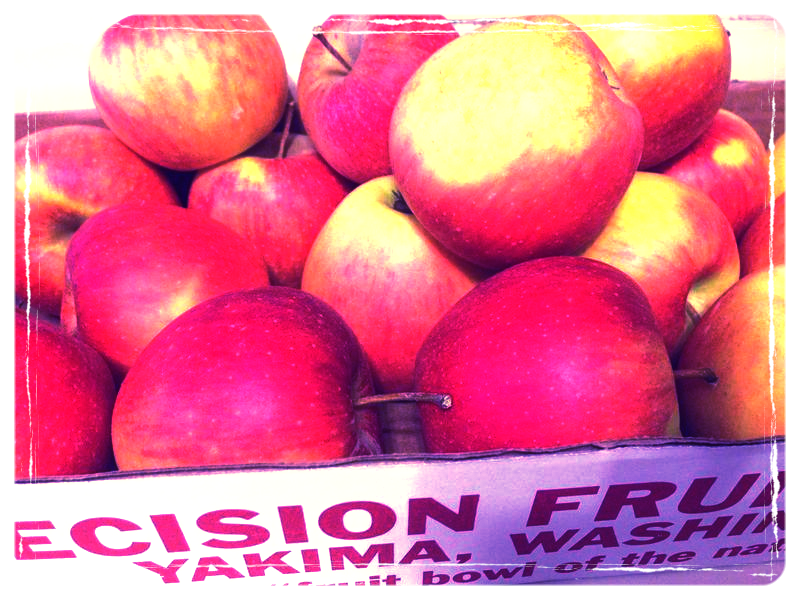 After eating apples for breakfast and lunch all week, and enjoying the benefits of eating two apples a day along with cleansing shakes and vitamins –  I decided it was time to kick the healthy apple eating and go all out apple pie for my Saturday dinner party with friends.

I could have just made a solid standard american apple pie recipe with these lovely fresh apples, and everyone would have been happy.   It was not enough for me though – this first Saturday in October I decided I needed to make the ultimate interesting new gluten free apple pie. My one caveat, no online recipe research – I had to make it from the cookbooks, magazines and clippings I physically have in the house. 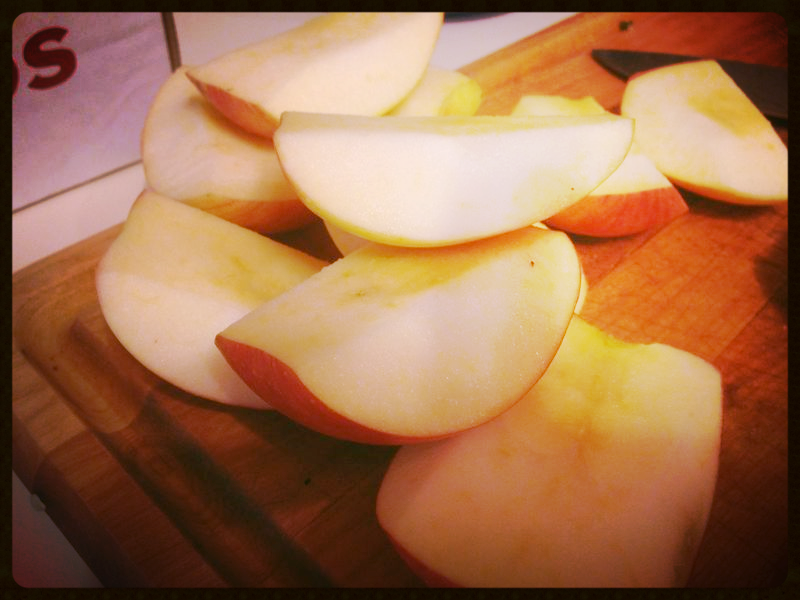 I started by opening up the Tom Douglas Dahlia Bakery Cookbook I was gifted a year or so ago and struck gold immediately.  Hot Buttered Rum Apple Pie.  Heck yea!  I just had to make a variation for the crust. 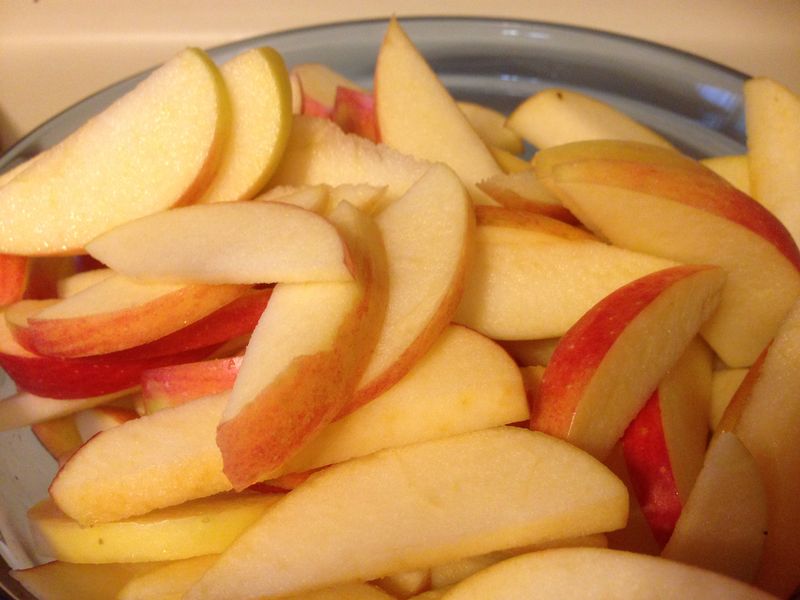 Problem – gluten free crust is a pain to roll and I was not in the mood to fiddle with such a picky baking process.  Solution – I needed a crumb topping.  Mr. Douglas only had flakey gluteny  joyfully yummy looking crust to offer so I reached for Martha Stewart's treatise on baking, known as the Baking Handbook and found Almond Crumb Crust.   My complex interesting apple pie mash-up plan was complete.  Now I just had to make it.

As recipes are merely guidelines toward your own flavor and cooking genious I started by making some decisions to depart from both originals.  This usually gets me into trouble when baking, especially when translating glutenous to gluten free.  The first decision I made was to leave the skins on the apples.  I sliced up 7 apples into quarter inch pieces and set them aside. 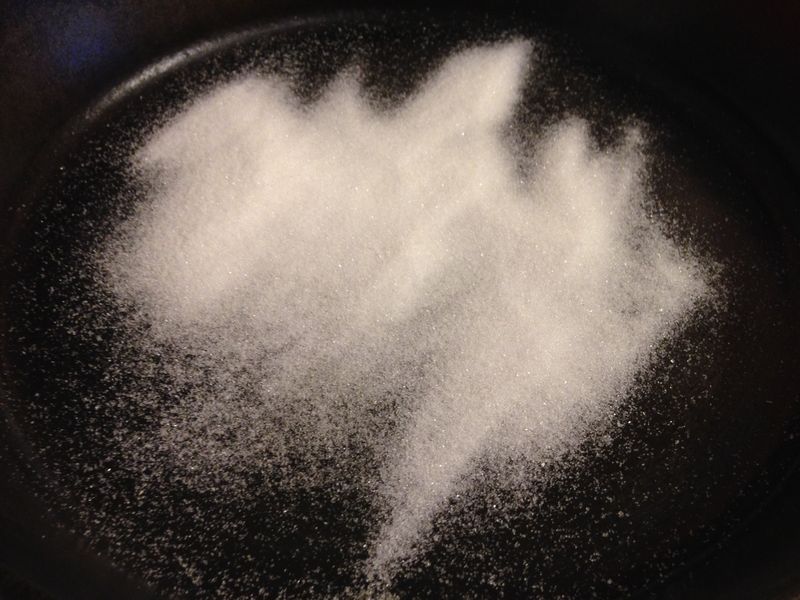 Following Tom's instructions I split a 1/3 cup of granulated sugar between two pans and waited for it to carmelize without stirring.  The moment it carmelized I added the apples and stirred them around in the molten sugar. 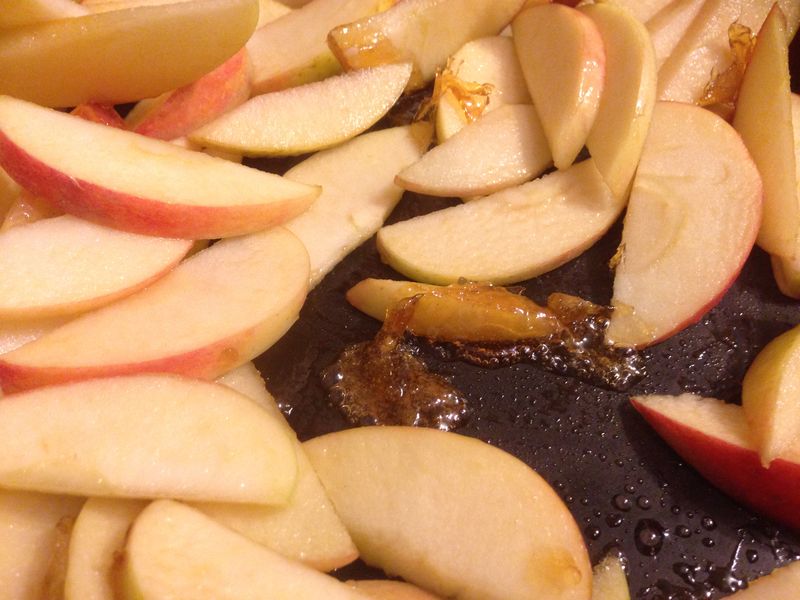 This process really gums up your spatula.  Do not be alarmed, soaking it in hot soapy water solves all problems after. 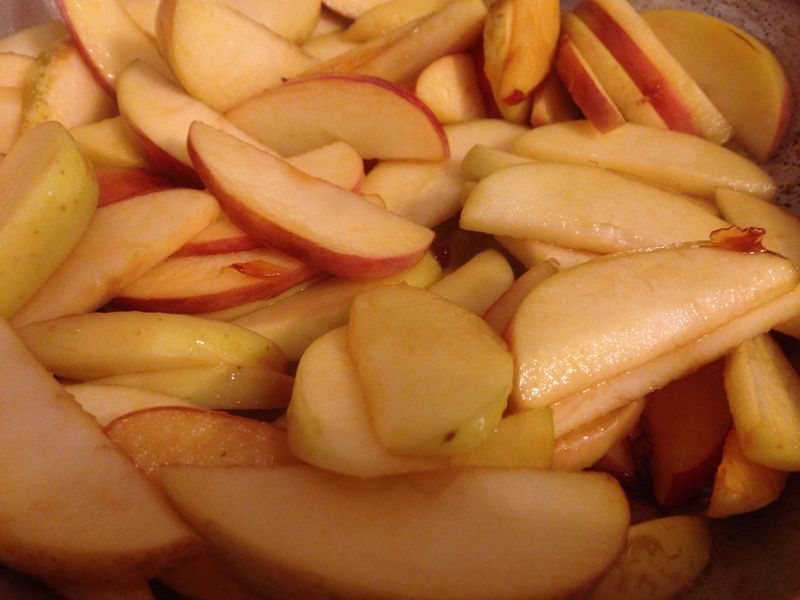 Saute the apples until they are just slightly cooked and all of the liquid (sugar and apple) is absorbed into them.  They will take on a slighty golden hue.  Set them aside and allow them to cool down to room temperature.

When they have reached room tempaerature then add the brown sugar, the other seasonings, spiced or dark rum and butter.  I did not go dairy free as I believe in real butter – but I think that a decent butter alternative like earth balance would likely work for this purpose. 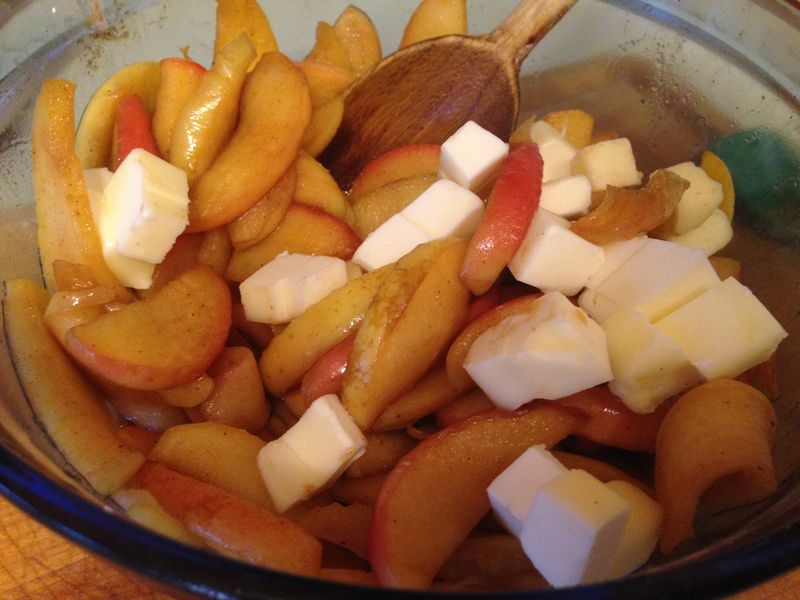 This recipe was supposed to be enough filling for one 9 inch pie pan.  It filled two of my 8-inch pre-made frozen gluten-free pie shells.  Yay! two pies! 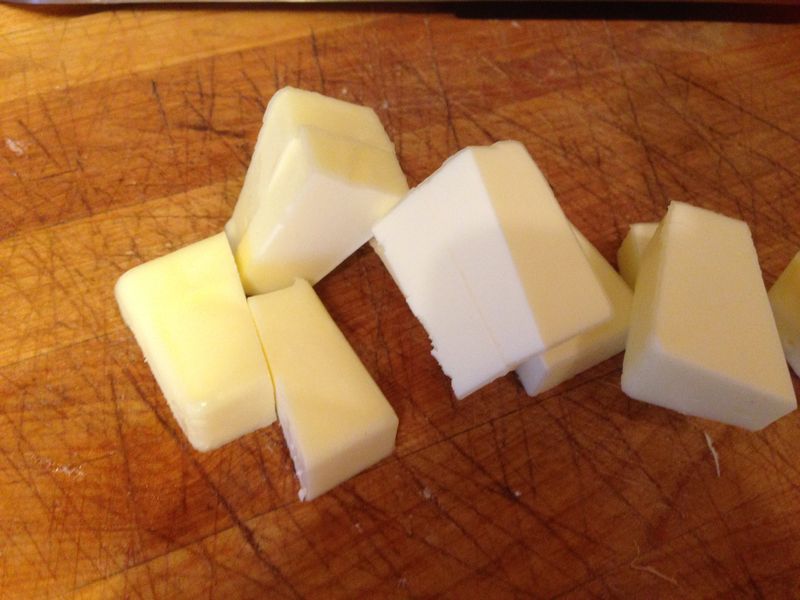 Knowing the volume of pie topping I needed – I started on the almond crumble top.  I read the word "blanched almonds" and realized I needed to boil water.  I also realized that I was on another Martha Stewart baking adventure – because I never quite seem to be able to follow her recipes appropriately – but I do generally make them work by my own creative tenancity.  This adventure was no different. The way the recipe was written it appeared I just needed to put all of the ingredients in the food processor.   So in went the sugar, garbonzo bean flour (substituting for all-purpose wheat), blanched almonds and butter – the result was an extremely thick and sticky paste that was really difficult to remove from the food processor.  It tasted amazing, however, so I decided to force it to work even if it was not correct by Martha standards.  One must fail in order to be great, right? 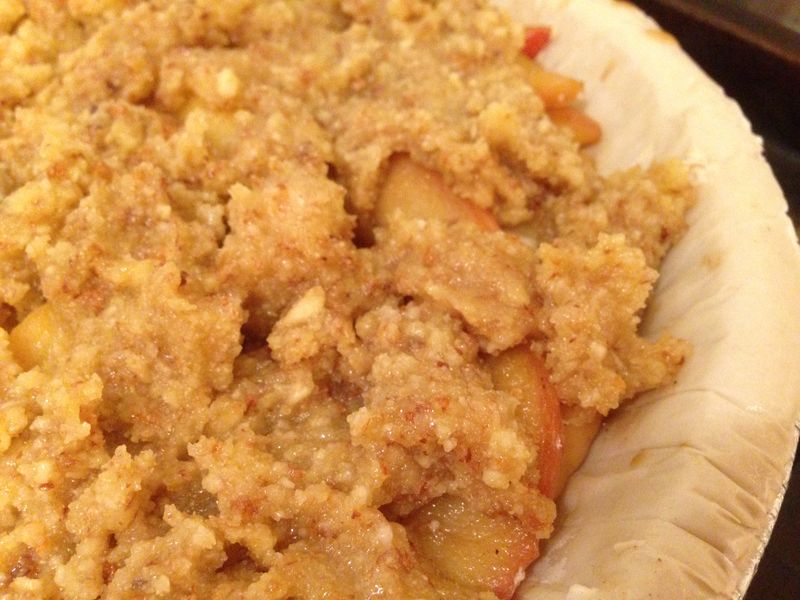 As I pulled the gooey almond mixture out of the food processor I realized I discovered a recipe for homemade gluten free almond paste for my almond christmas cookies (but that is another recipe for later in the season).  The almond paste was sticky and stretchy so I just pulled and stretched it over the top of the two pies, covering all the apple area and hoped that it would bake up nicely.  It did – and the mash-up of the two recipes tasted heavenly. 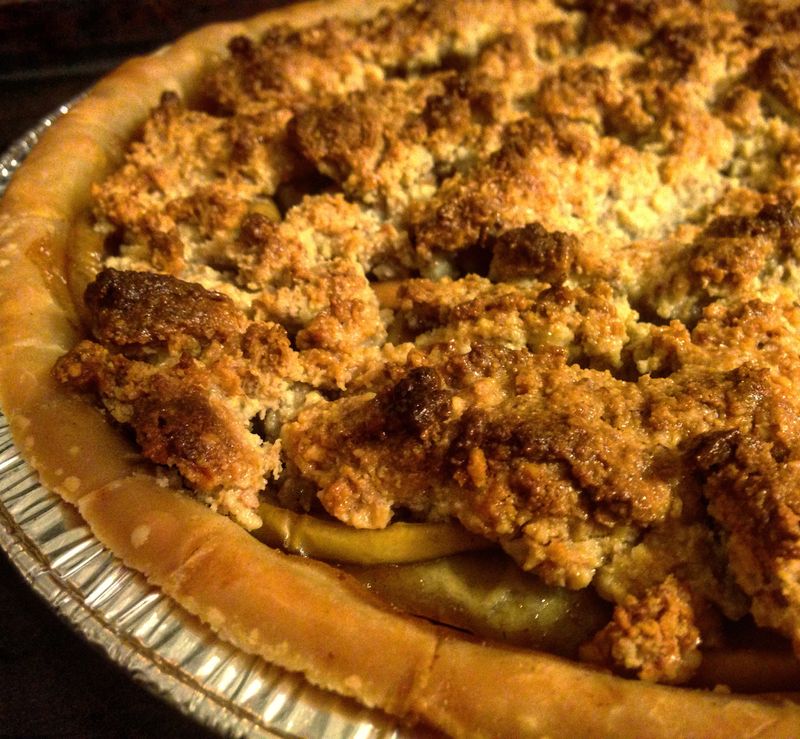 Cut the apples into quarter inch slices.  Leave the skins on.   Divide 1/3 cup white sugar into two pans and heat on medium until the sugar melts and carmelizes (changes color to golden yellow and brown) without stirring.

Divide the apples in two and fry in the pans with the carmelized sugar.  Cook until the apples are partially cooked and turn slightly golden – all the sugar and apple juice is absorbed back into the apples.  Roughly 8 minutes.   Remove the apples from the heat and let cool to room temperature.

Make the almond crumble top.   Boil water and toss in the cup of almonds when the water has come to a complete boil.  Boil for less than a minute.   Strain the almonds and run cold water over them.   Dump the almonds into your food processor.  Add flour, sugar and butter,  and blend in the food processor until you have an even paste.   Warning it will be sticky.

Take handfuls of the almond paste and stretch it across the top of the pies until most of the apple is covered.

Bake the pies at 350 degrees for 45 minutes or until the juices are bubbling and the top is a golden brown.

Let chill to set for at least 10 minutes.