I travel with my friends Jeremy and Dan a lot, and frequently when we are at the beginning or in the middle of our vacations together we ask the question, "Why did we plan so much driving during this vacation?" This question passed through our minds when we reached hour 5 of our drive from Duluth, Minnesota to L'Anse, Michigan, and we were not even close to being there yet. 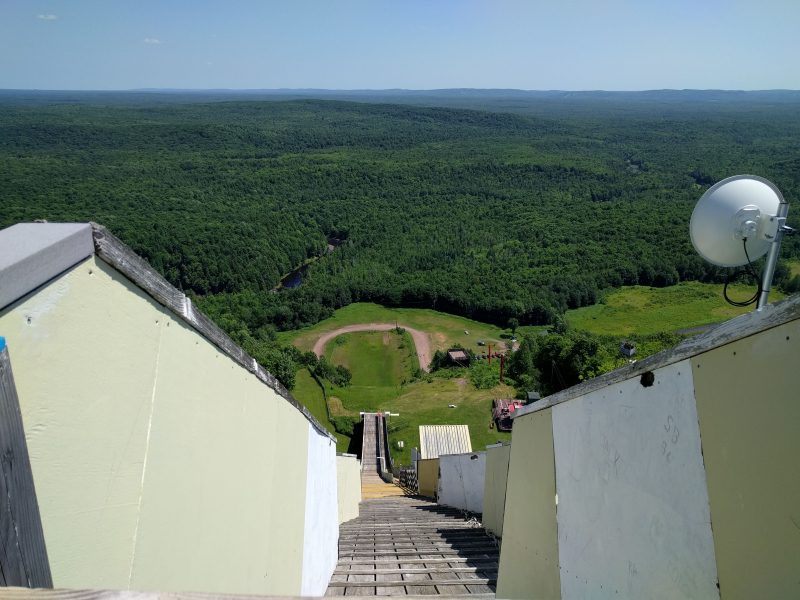 We were on the road by a little after 10am. And this was after I had been out until 4am catching up with old friends in Duluth and getting caught without a Lyft or cab because I waited too long. It was one of those situations where I knew better, but it happened anyway, so I just going ate the sleep deprivation appreciated the of time spent with people I care about. Because you never know if you are going to have the opportunity again. 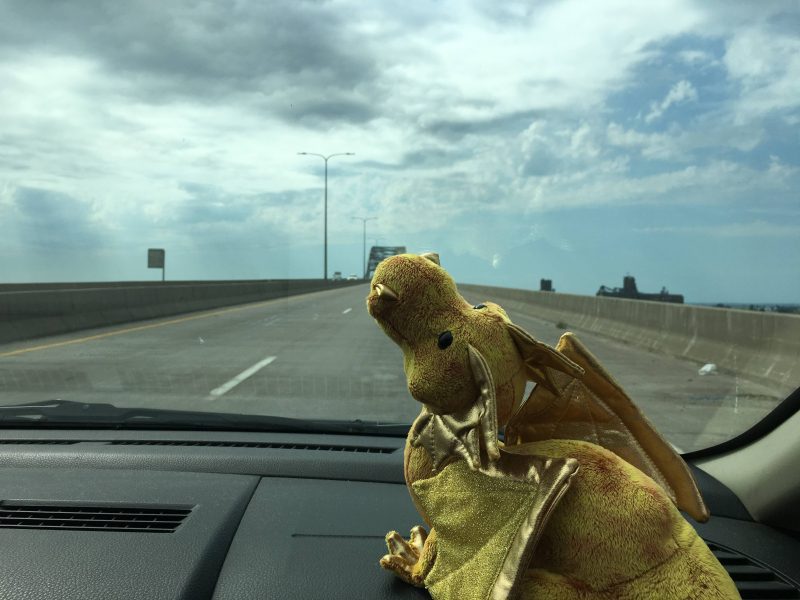 So there we were on the road to the Upper Peninsula, with only a couple of stops planned for bathroom breaks and stretches, plus two minor excursions (since we were in the neighborhood) to the Upper Great Lakes Visitor Center (which was also a rest stop) and Copper Peak. How bad could it be? Not bad really, but still a very long drive. 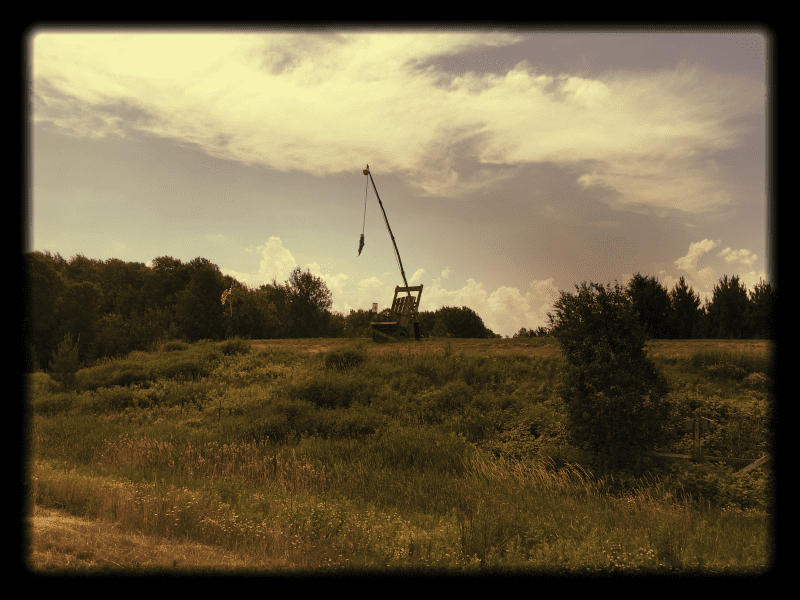 We did pass a giant adirondak chair on the side of the road. 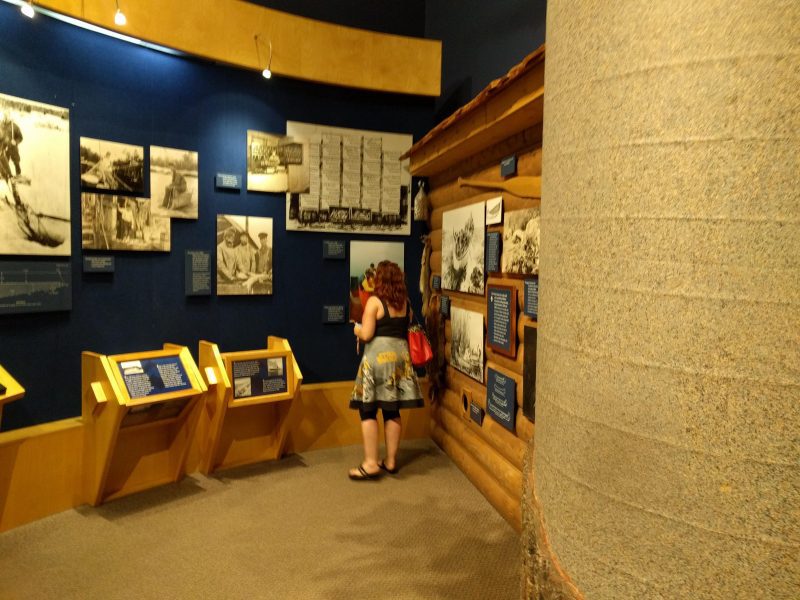 The Upper Great Lakes Visitors Center is a large rest stop in Ashland, Wisconsin that goes deep into the geological, cultural and other bits and pieces of the great lakes region. It is quite the neat place to stop, and if you read everything you could learn about most things that have affected the great lakes region from the time of the glaciers. I did not read everything – I took pictures of my dragon on various exhibits. I could not resist putting Dandelion in the context of the many dioramas that were available in the museum. 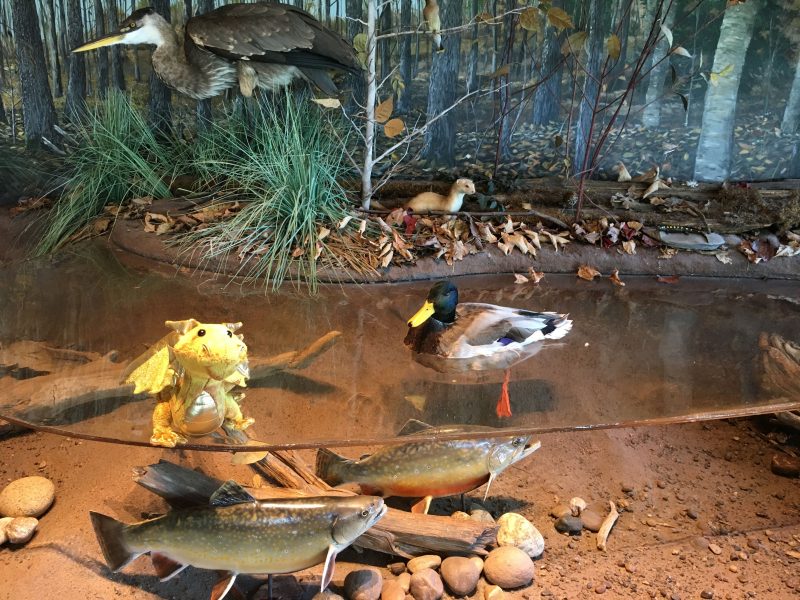 After our swift journey through the visitor's center we were off for another bazillion miles at 45 to 50 miles per hour on two lane highways across Wisconsin and the Upper Peninsula of Michigan. We saw a lot of trees and not many towns, and even less people. 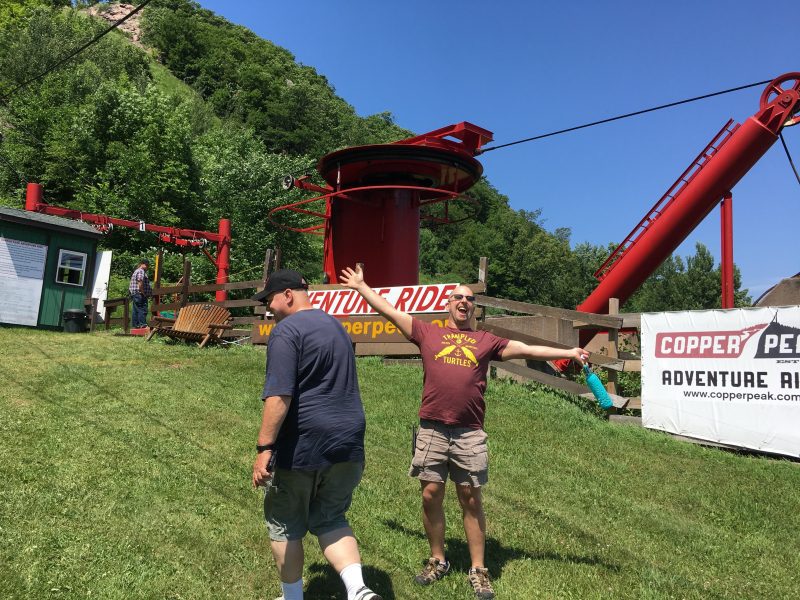 I thought Copper Peak was a copper mine that you could peak your head in and then go to the gift shop.  I was so wrong. When we finally pulled up to the place that looked like a singular ski hill with a huge strange ski jump looking thing at the top I realized my folly.  Jeremy was so excited however, so I agreed to go to the top with him. He also enlisted Dan by purchasing us all tickets and telling us we were going. 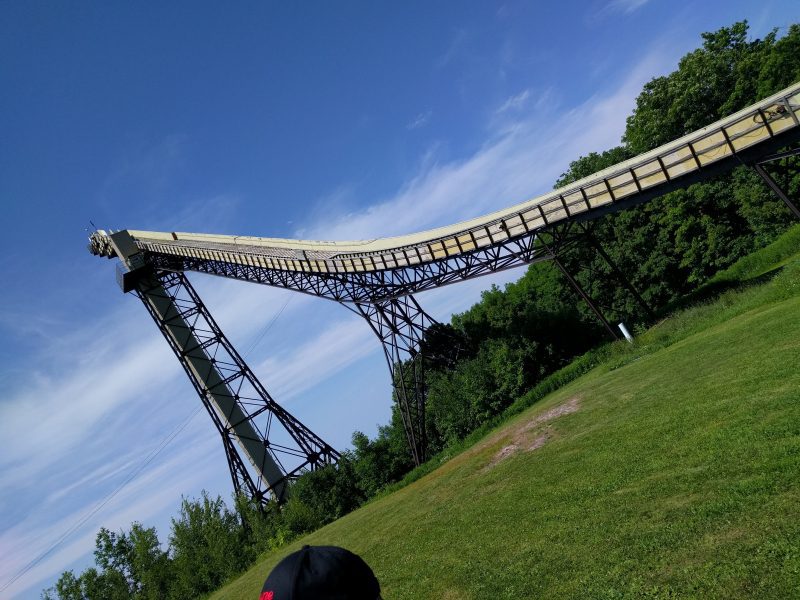 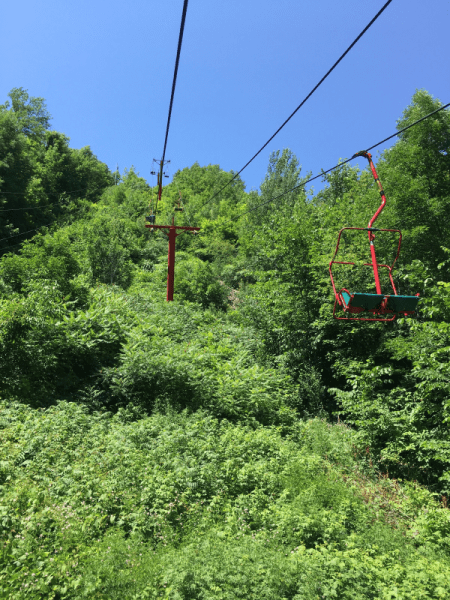 The chairlift up the hill was scary. You are at an angle so it feels like you are hundreds of feet up when you are just 20, but the hillside is at a steep angle.  Then at  the top they tell you that there is an additional elevator ride to the top of the actual ski jump structure. 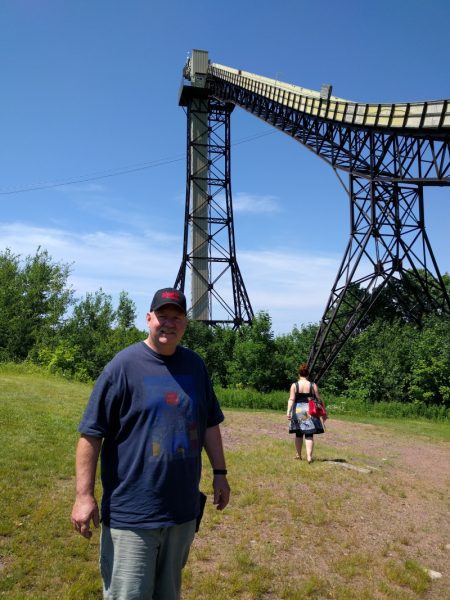 And then once you get to the top and step out of the elevator, they tell you you need to climb an additional eight stories to the top of the structure. Then you step out on the stairs to try and climb them, and realize they are rickety and exposed to the elements, and the stairs that are not rickety you can see through to the ground because they are wrought iron grates. No bueno for height loving me. 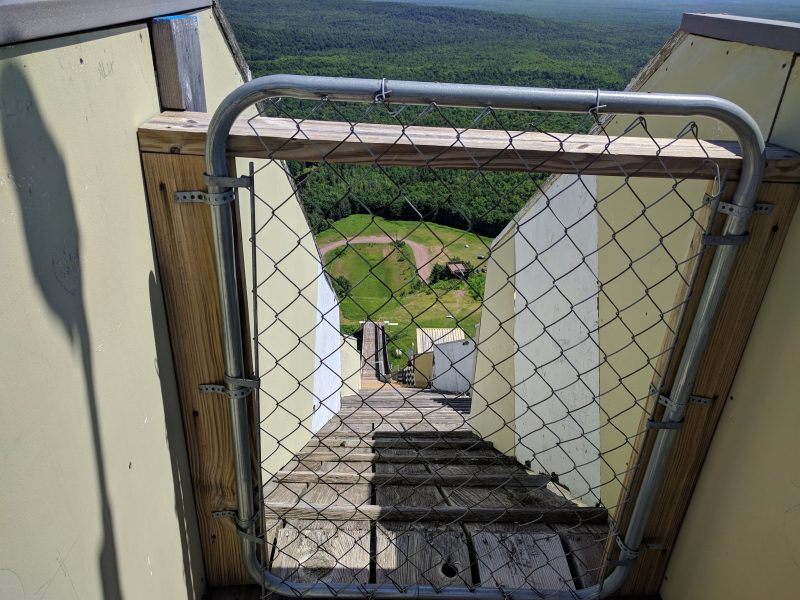 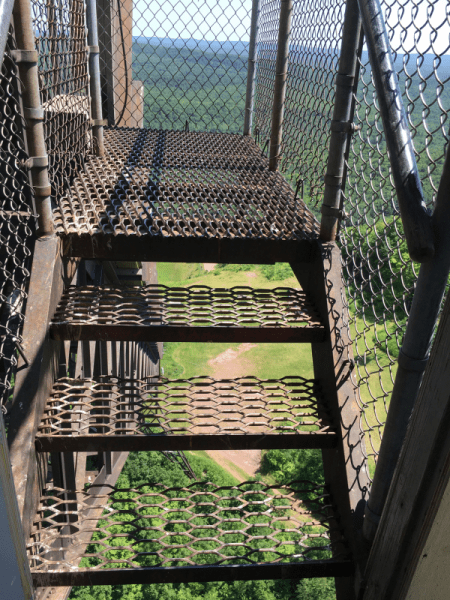 I made it to platform 2 (the space outside the elevator). Dan made it to platform 3 (the place where the stairs turned into a wrought iron views of the ground below). Jeremy, bless his heart, because he spent the money and was not going to have it any other way, was the only one who actually made it all the way to the top. 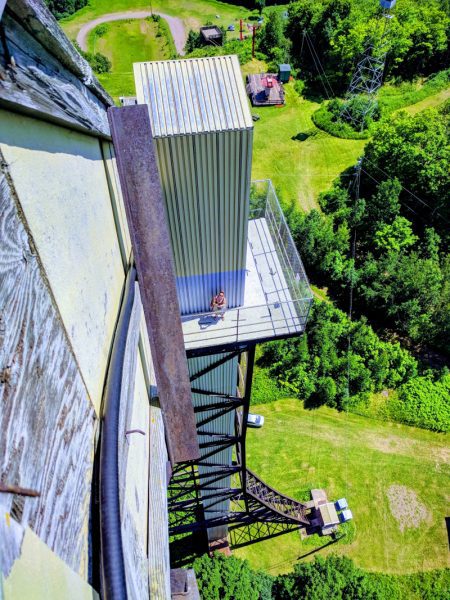 I was not sad that I did not make it to the top. I had a fun time talking to the elevator operator who was quite the character. As I stood on the cement platform attempting to take the perfect Instagram photo of the ground, the elevator operator lit a cigarette (inside the elevator structure, not on the platform next to me) and said "Yeah, I hate heights too. They are not for me. My girlfriend now, she loves this place.  We came here and she climbed right up them stairs there without a blink." Dramatic pause as he took a drag from his cigarette and looked longingly to the ground. "Yeah, that day we were here that one time, she found out they needed someone to run the elevator and, ya know what she told them?  I know a guy." He shakes his head and laughs. "And that is how I got this job." 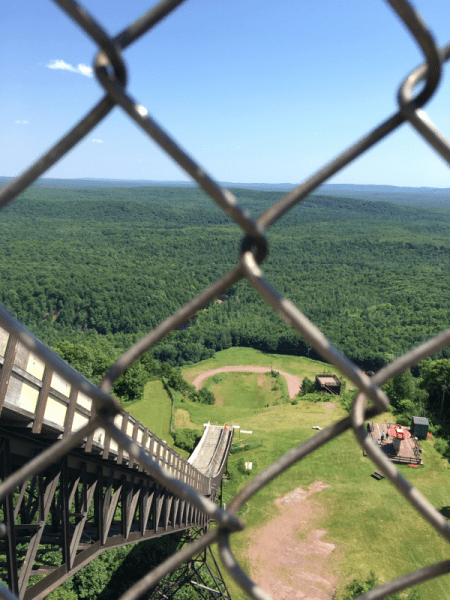 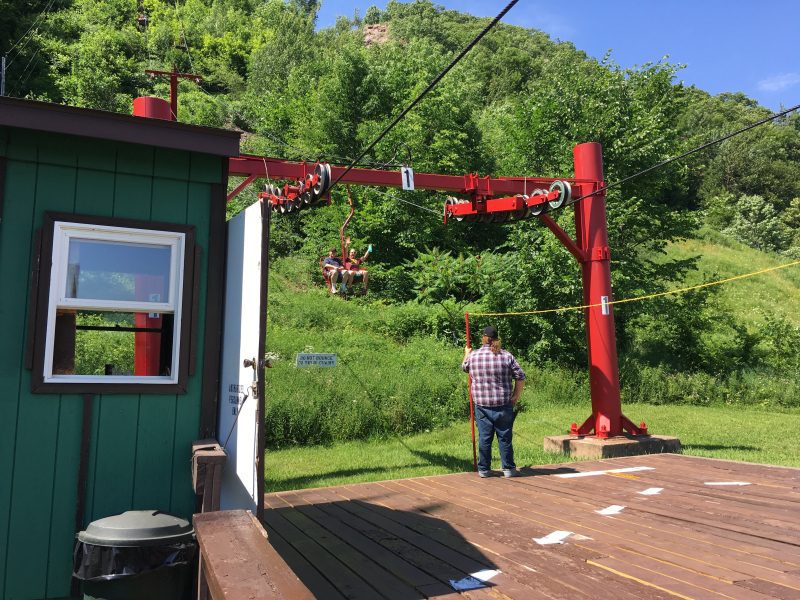 I did try to go up the stairs to the top but as I reached the third stair the bottom of my stomach dropped out on me in such as way as I knew that if I made it to the top I would be scooting down the wooden stairs on my butt in the best of case scenarios. Worst case scenario I would be stuck up there, holding on to something and frozen. So it was best to just let this opportunity pass. I got a little bored after a while waiting for the boys to come down but I held strong. I messaged my parents to let them know that we were going to be even later because I was stuck on top of a ski jump waiting for my friends and drivers to come down from the sky.

And finally we were coming down again from the heights and on the chair lift. This time it felt like everything was a thousand feet below me. I held on to the center handle for dear life, and prayed for it to be over before I really noticed how high and how unsecured I was in this chair lift.  Then the wind started blowing, pushing my chair around back and forth in the least ideal of ways. I practiced my relaxation breathing as I swung back and forth in the wind with no seat belt and finally made it to the ground. 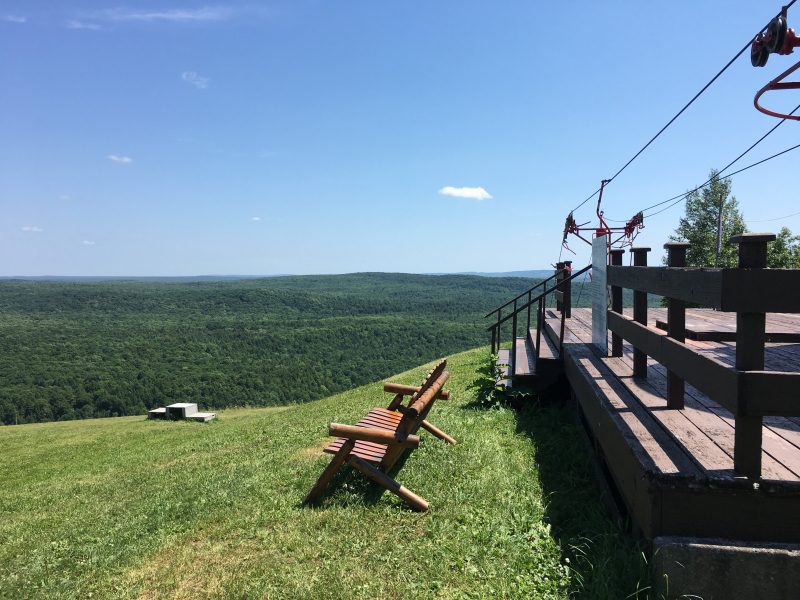 When we got back on road again to find our route blocked by a closed bridge so we re-routed and did our best to get to my parents before dark.  We made it by about 7pm Eastern time and found the whole lot of them, plus good friends and neighbors waiting for us in the yard. 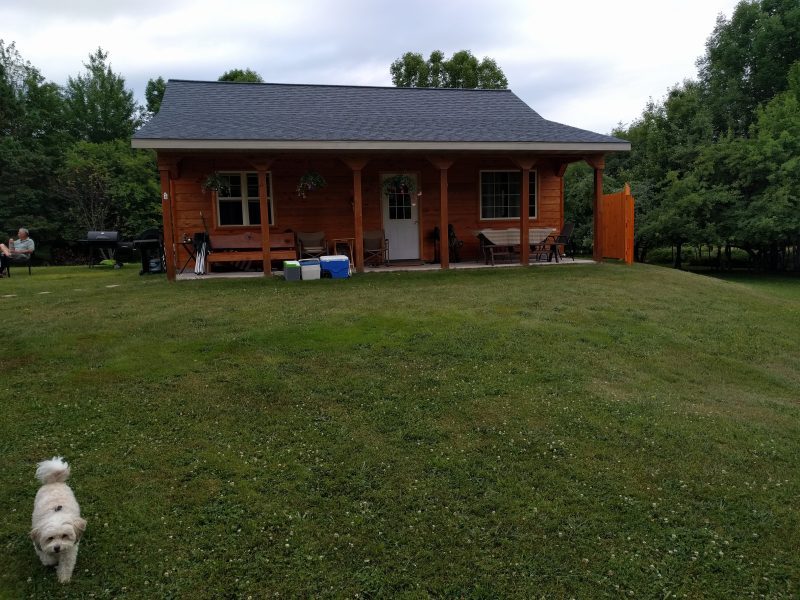