Upper Peninsula full day number 2 started way too early in the morning when the children in the top bunk started whispering in outdoor voices and climbing up and down the ladder of the bunk bed.  I was one of the last to go to bed the night before, holding strong to hang with my sister and brother in our precious hours of visiting. Unfortunately, I was one of the first to awaken on this fine 4th of July eve day. Lucky for me there was coffee and an open bathroom. 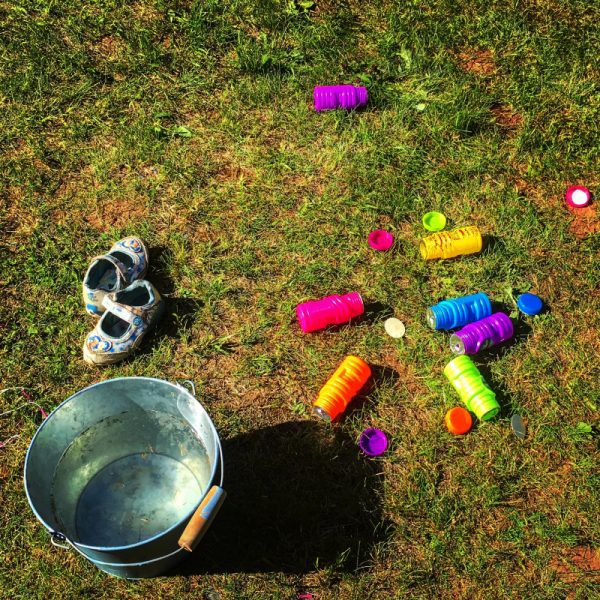 There was also bacon, and a power outage that stopped the parade of showers in our one bathroom dead in its tracks (simultaneous with a small child falling off the bunk bed ladder resulting in crying and a scraped leg) – requiring a round of Bloody Marys for the crowd to regroup and think straight. While all this was happening, my mother was busy trying to arrange round two of excursions into the local surrounding area. Bloody Marys would prevail over camp counselor however, along with melt downs by those of us under the age of 6. Meanwhile, the mechanical engineers among us scratched their heads and considered the situation of the power outage. Unfazed by the lack of power, I wondered if it would be appropriate to have a beer back with my bloody at this time of day with so many children around. 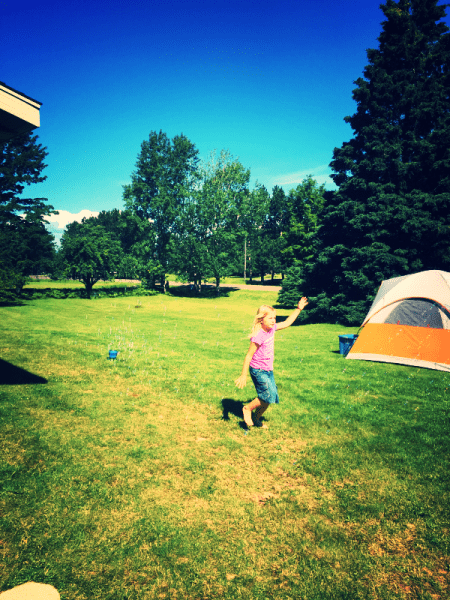 Instead of drinking more in the morning I decided to document Kira's bubble machine dance, work on my blog, and read the local Marquette free paper where I found this advertisement for a local bear experience. 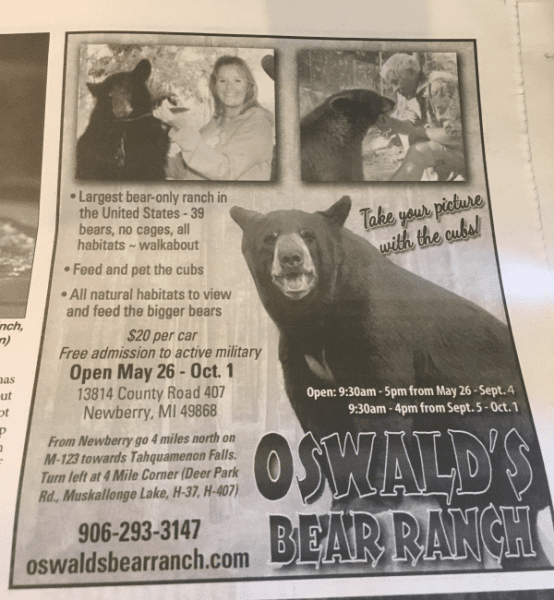 The debate of the morning besides buttered or not buttered toast was 1. When brother Frank was going to leave the party to head back to Minneapolis/St. Paul; 2. When friend Stacy and family were going to arrive in their brand new camper trailer; and 3. Was sister Rachael ever going to get a shower? Slowly it all came together after a round of Bloody Marys – Rachael got a shower after the power came back on without a trip to Shopko to purchase a generator, Mom made a plan for us to walk to the Davis Family Farmstead down the road, and Frank chose that very moment to exit stage left to start his 8 hour drive back to the big city in the center of Minnesota. 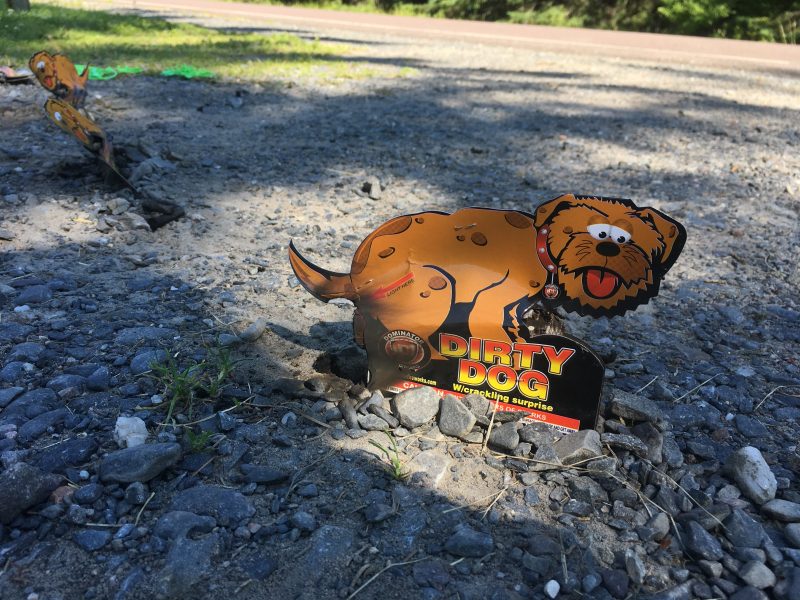 We totally failed to take a family photo. Shit. 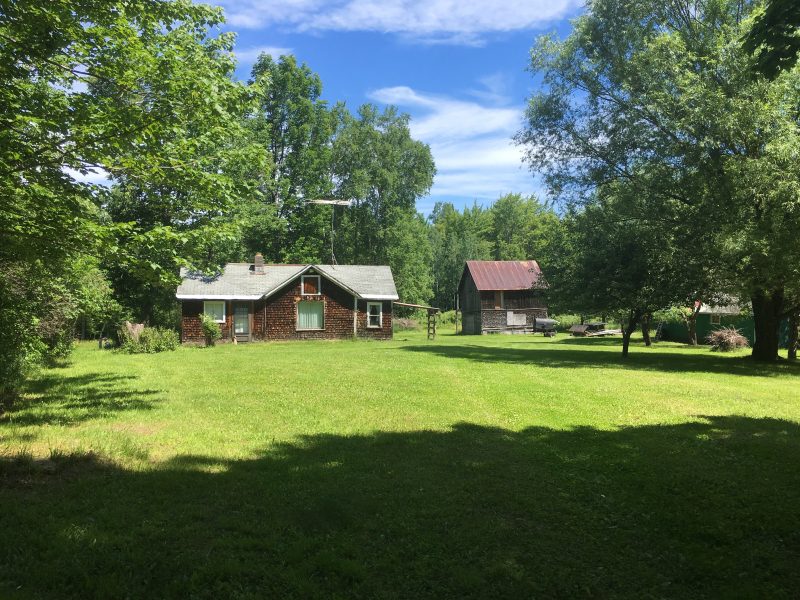 I took the walk with my parents down to the Davis Family Farmstead. Now my brother-in-law's land, it was once the home of a railroad station and a tiny log cabin that worked as something for the railroad. There are currently no railroad tracks, or any sign of the log cabin, just the graves of dogs and grandfathers on the land. 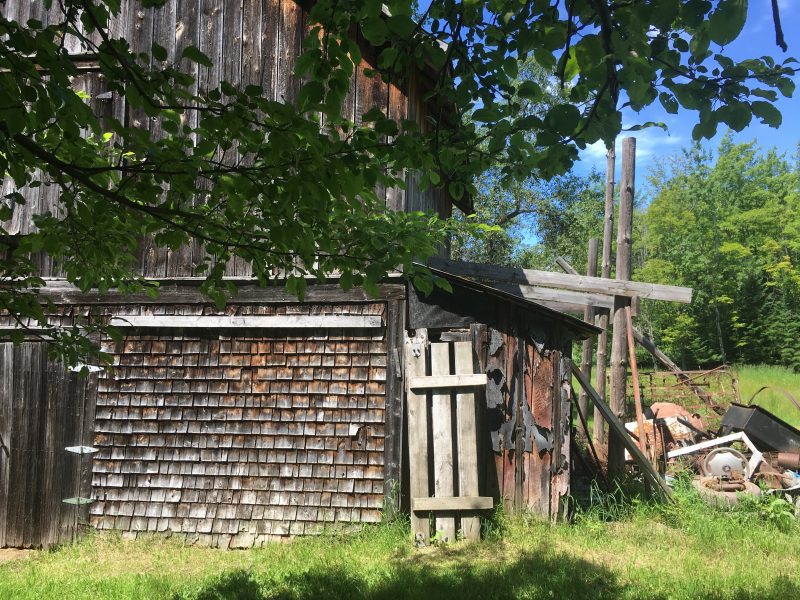 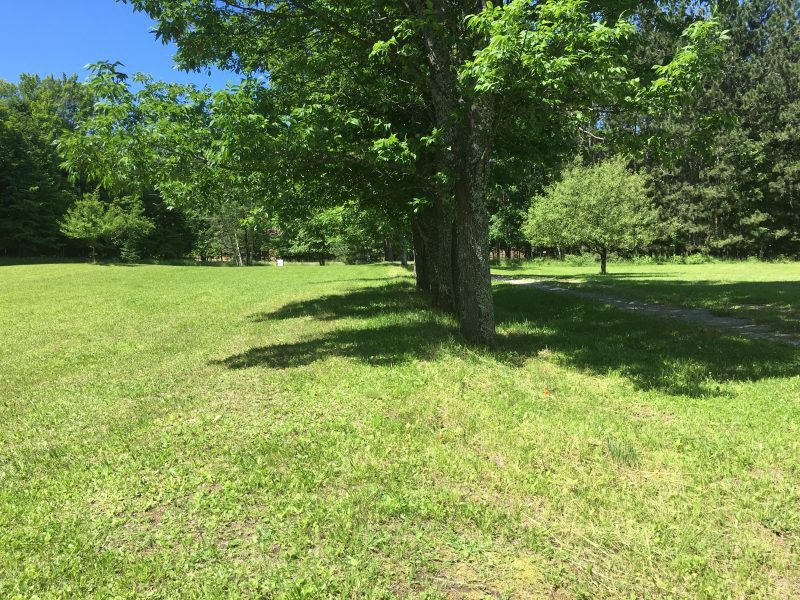 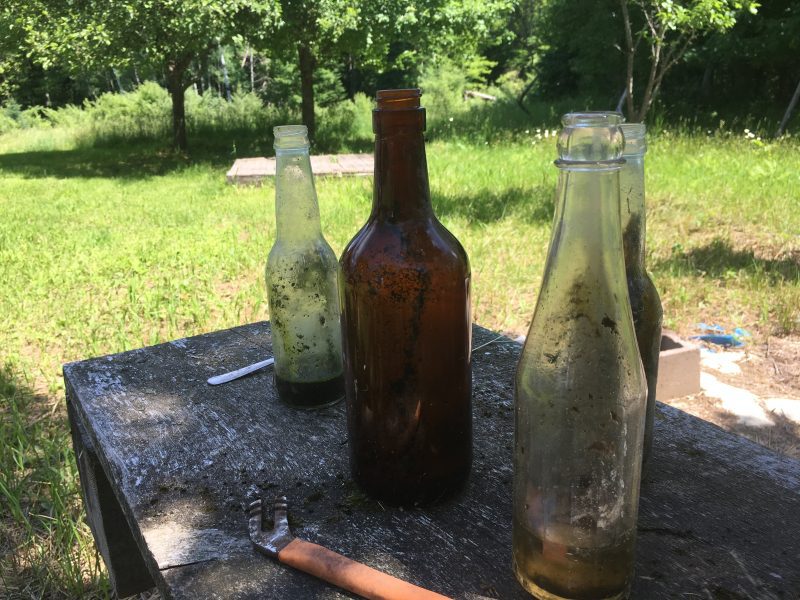 Taking in the farmstead and the large yard my parents are now curating it became clearer to me how and why they chose to come to this place for their retirement home. The connection to the land, even if family by marriage is important here, and through the connection to my brother-in-law, they had an doorway into the Yooper life. 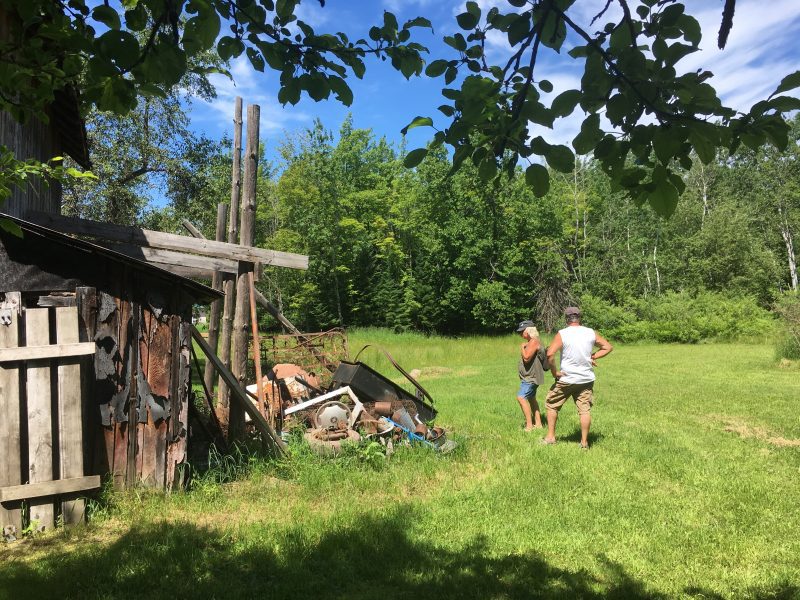 They also have things to do involving physical exercise, and people who like to live in a place that is an island onto itself who think of places like Duluth, Minnesota as bustling metropolises. The Upper Peninsula is a special place of beauty, isolation, and rugged individualism – it is also a great place to have a party on a swath of land for the 4th of July. 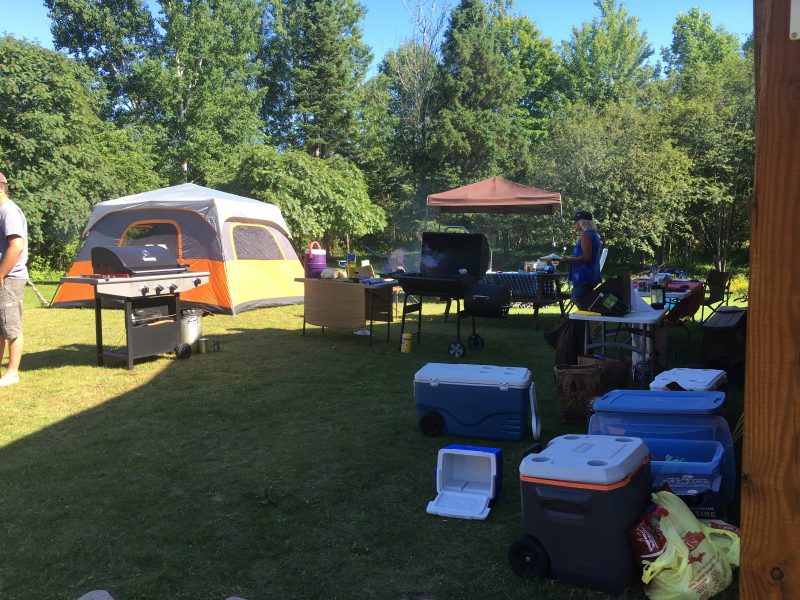 A party that requires food for the masses – so when we got back from the farmstead Russell and I started cooking. 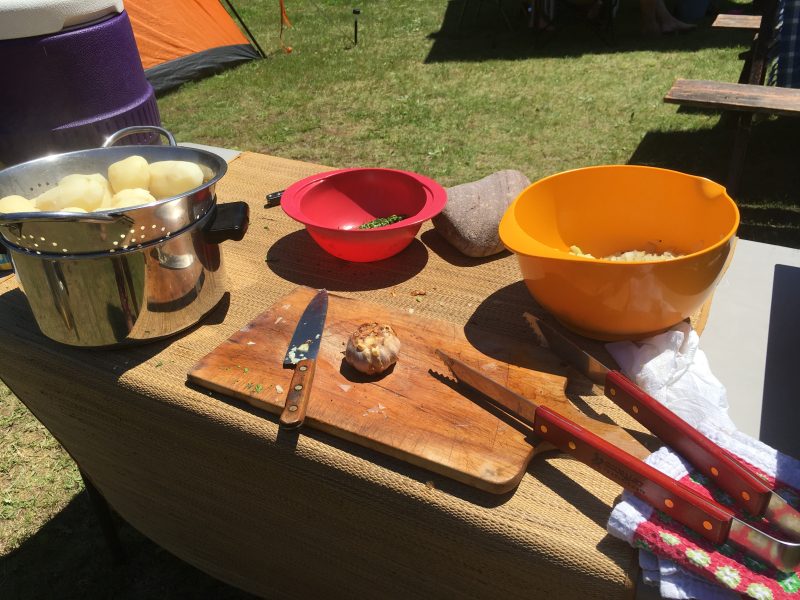 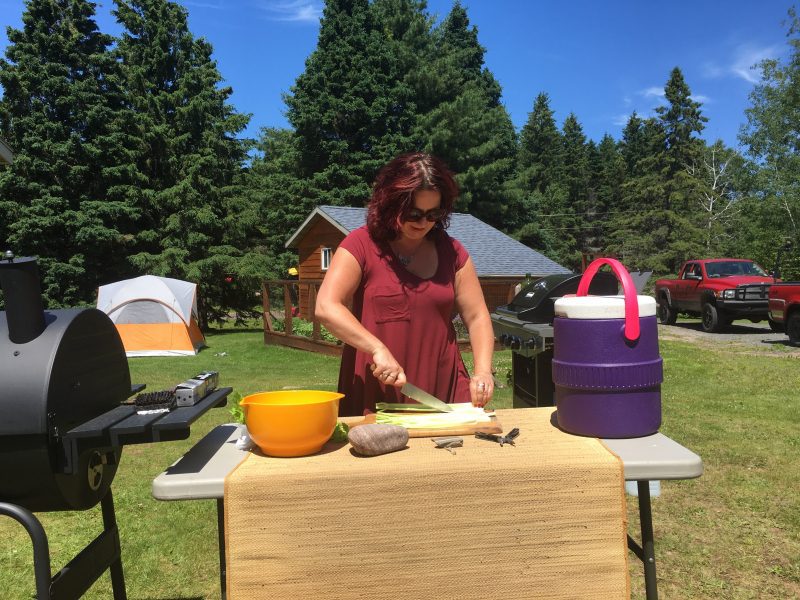 I started making my seasonal favorite – Paprika Angel's Potato Salad, the UP version (as some ingredients, like fresh dill, were not at my disposal) and my dad Russell started on the rub and marinade for the locally raised ham that came from the pig farmer down the street. I learned that Russell's own special recipe BBQ rub is the star of a fleet of BBQ food trucks run by his cousin in Southern Tennessee. The lawyer in me immediately asked if he was getting a royalty. He simply replied that he had turned down the offer to be a partner, because he wanted to be retired. 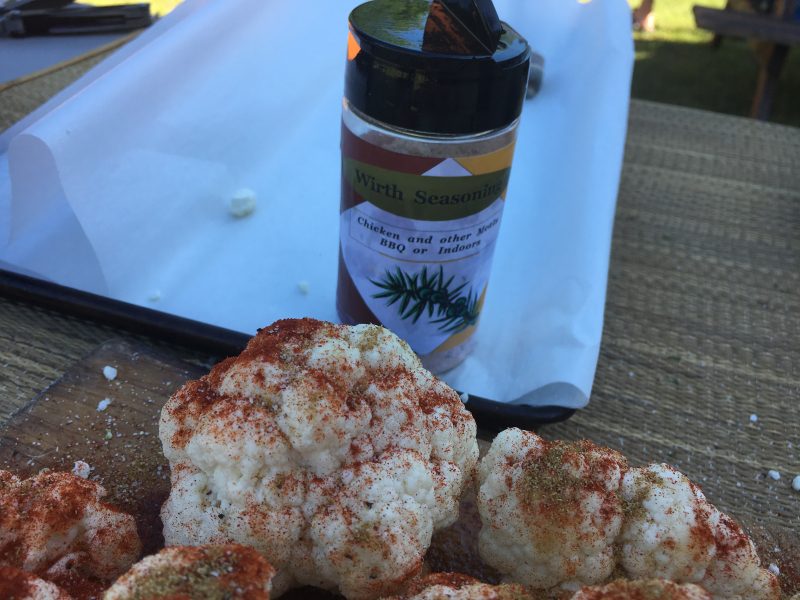 The Wirth family has been known to make a few good special family recipe seasonings from time-to-time. As I learned the art of large scale cooking, and large scale BBQ by observing Russell and his dad, my Grandpa Duane, feed hundreds the most glorious butter and Wirth Seasoning coated chicken at many a small town function in my youth. 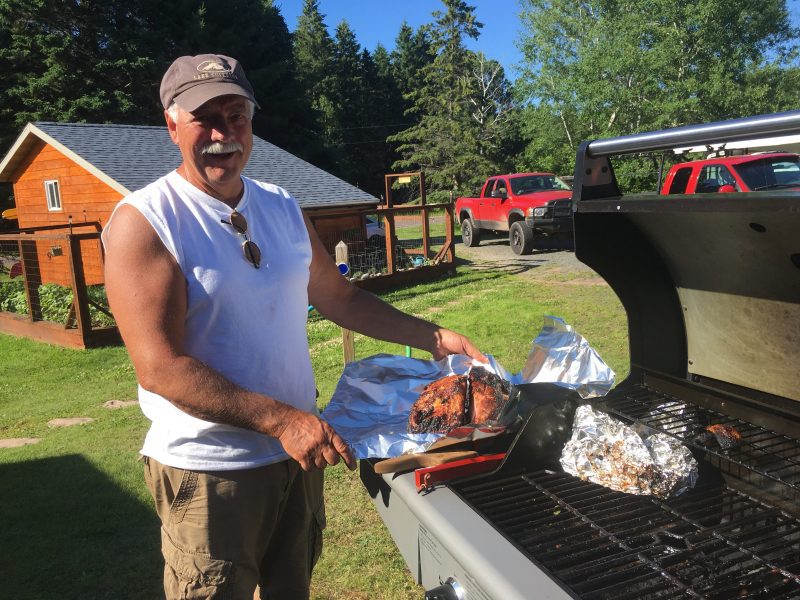 Entertaining and cooking large amounts of food over fire is just in the family lineage. Its just what we do.  I was happy to provide some vegetation for the party on this day with my potato salad and some grilled cauliflower. Nothing was lost on the hungry crowd that had now grown to over 16 even with the exit of my brother. 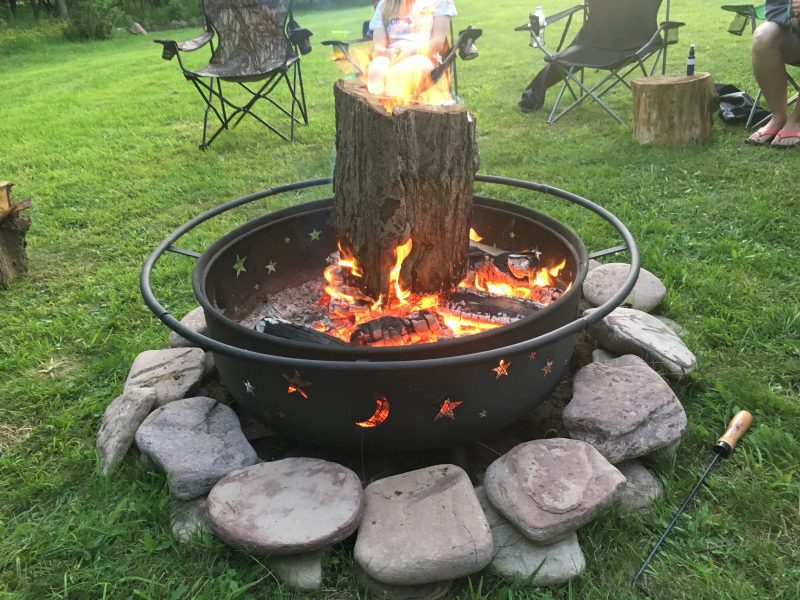 As another evening fire was prepped for our standing and sitting around I couldn't help but feel a little lonely in the crowd of families and pairs as the sole lone individual. I have few friends remaining in the Midwest, but of the few I wondered why hadn't I invited them to come up and camp? Or why hadn't I invited my new fellow to make the journey? Even if none of them were able to come I could have at least made the effort – but the idea to do so hadn't even occurred to me as I'm so used to flying solo.  And even if it did occur to me I realized I'd made multiple subconscious excuses as to why the ask was futile without ever making it. 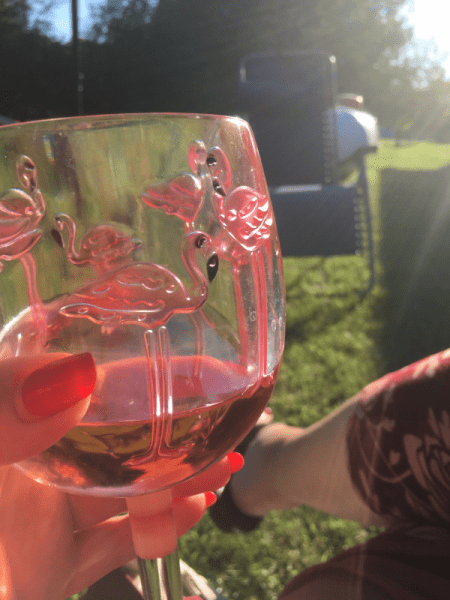 At least this time I was with my family, who I rarely see, in a beautiful place, catching up with people I haven't seen in years. It was a fun night, even though the mosquitoes ate through my leggings and completely ignored my semi-effective hippie bug dope.