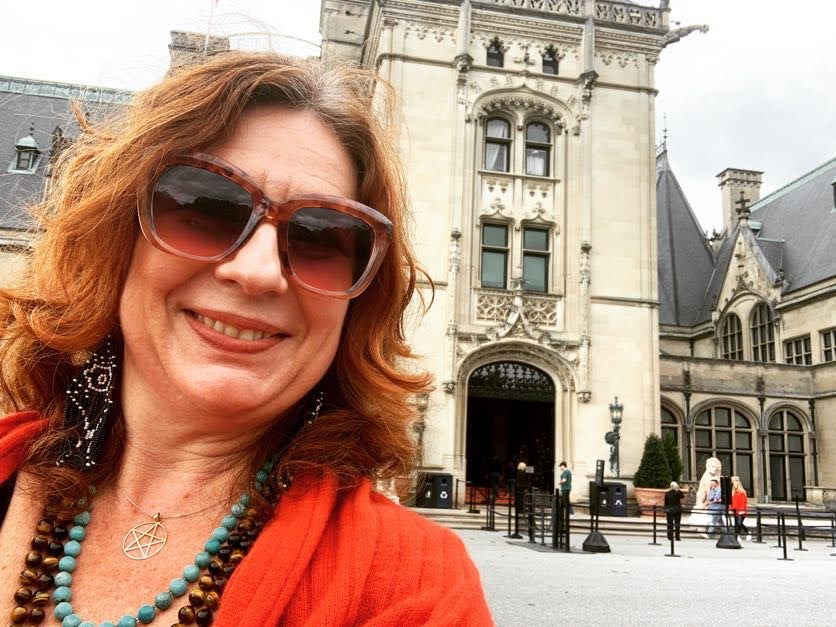 In fact it is known as America’s largest private residence. It is a 250 room French Renaissance chateau/ summer home/retreat center for the George Vanderbilt family – built over 6 years and completed in 1895. I am going to admit that I had no idea what we were going to see when Jeremy booked our tickets for this trip – and it wasn’t until we were on the Biltmore grounds that I learned it was a Vanderbilt mansion.

Arriving on the Biltmore grounds you find yourself in a bit of a Disney World kind of experience.

You drive and drive and drive, there are signs for parking and you have to walk from the parking to a shuttle, and on the shuttle they tell you all about all the things you can buy while on the grounds at the various locations. Meanwhile, you can’t leave the grounds, without losing your $100 plus admission – so you better buy something on the grounds if you didn’t pack a granola bar or anything to get you through the long day.

We had two sets of admission tickets – one for the Da Vinci Exhibit at Deerpark in the morning and a second for entrance into touring the Biltmore House in the afternoon.

The Da Vinci exhibit focused not on his art, but on his innovations and inventions. Leonardo was way ahead of his time and his innovations in art, science and mechanical engineering were used for the military, for advancements in exploration of air and sea, and many other fields. Leonardo was an initiate in the Lineage of King Solomon and student of the esoteric and mystery traditions, among other things – all of his science was fueled by the rules of hermetics and his art was an expression of sacred geometry in shape, pattern and precision. The exhibit was very interesting and went into detail on each of his inventions. Then in another room there was a 3D immersive experience that surrounded you with music, quotes from Leonardo, his notebooks, paintings, and drawings that were behind his art and inventions. If you get a chance to attend this exhibit where it appears in the world – I highly recommend. It ended its tenure at the Biltmore Estate this January.

After the Da Vinci Exhibit our visit took us over to the Antler Hill Village & Winery so we could find a snack and a beverage prior to our tour of the Biltmore House. We also had almost two hours to kill between visits. This is where we learned about the serious Disney parking situation. Driving up to the Antler Hill Village you can’t just park in front of a restaurant, no there are 3 parking lots, a hotel, and a back entrance for deliveries. We did a couple rounds before learning where to actually park – and that no matter what it would be far from where we were going and past a lot of other options for things we could buy. Then we went inside and got the longest walk to the bistro and winery – which turned out to just be a giant gift shop and sales process. The lights in the tunnel were quite cool – and apparently the winery is “the most visited winery” in the entire United States. Which based on the theme park quality of the Biltmore Estate is understandable, as everyone is filtered through the winery on their way out.

From Antler Hill Village we drove back to the Biltmore House parking area and boarded a shuttle where we were informed of all the glorious things we could find in Antler Hill Village, and on the grounds of the Biltmore House. At this point I was full of mediocre hummus from the bistro located there, and no longer interested in any other food the estate had to offer. And then the shuttle arrived in front of the “house.” It really wasn’t until I was staring at the mansion that I had any idea HOW BIG it actually was. The grounds were huge, but that doesn’t necessarily mean that the mansion was going to be gargantuan….but it was SOOO big. These pictures do it no justice.

And unlike the Tardis from Dr. Who it is just as big on the outside as it is on the inside. Your ticket gives you an allotted time to enter to self-tour yourself through the multitude of rooms with an audio guide. This allows for pacing so there are not too many people gawking at the austentatious Gilded Age original furnishings and rooms at the same time. You can pay more and get additional tours out onto decks, rooftops and other closed off spaces – extra costs range from entry ticket plus $90 to plus $500 depending on your level of commitment to seeing all of the mansion. Honestly, the standard tour was long and overwhelming, even without a tour guide, just because the house is so darn big. There is plenty to look at so save your money unless you are returning for a second visit or some other specific reason.

Just walking quickly, not listening to every room in full, and taking a few photos at each stop I think took us way over an hour. I was officially tired from walking the residence and had a lot of respect for the golden aged tourists surrounding us and their stamina exploring the place.

So here are some facts about the Biltmore Estate. First – it was built as a retreat from the city for entertaining and actually meant to be a residence for George and Edith (unlike the summer “cabins” of the Vanderbilts in Rhode Island). In reality it functioned also as a luxury hotel, and employees (according to the official documents provided by the estate) received wages higher than the Asheville standard wage at the time. The Vanderbilts also bought the nearby town of Best and renamed it Biltmore Village, and started their own school Biltmore Estate Industries – which taught craft skills (woodworking and weaving) as well as the school for Domestic Science (teaching housekeeping). They also created the Biltmore Forest School in 1898 creating the first institute for scientific forestry in the United States. All schools improved the job opportunities of the individuals in their community at the turn of the century.

The house is 250 rooms, and once sat on 125,000 acres. After George’s death Edith sold off significant chunks of land because it became too large to manage including 87,000 acres to the federal government to create Pisgah National Forest. Biltmore House took 6 years to construct and employed over 1000 workers. The house was first opened on Christmas Eve of 1895. George and Edith Vanderbilt moved into the Biltmore in October of 1898 after their four month honeymoon in Paris and Europe. They welcomed their only child, Cornelia, born in the house in 1900. George Vanderbilt died in 1914 from complications of an appendectomy. After his death, Edith managed the running of the estate and raising their daughter Cornelia.

Cornelia spent her whole life in the house (of course leaving here and there like a normal socialite from a wealthy family). She married into royalty of some sort and had two children – it is her children, the Cecils who opened up the Biltmore Estate for tourism in the 1960s and started the preservation efforts to bring it back to its turn of the century grandeur.

Per the guidebook that Jeremy’s mother bought many years ago (and is still available in the very large gift shop located in the carriage house right next door to the giant residence), Biltmore welcomes 900,000 visitors and year. It doesn’t appear that Covid has slowed this down based on our personal experience there in October of 2022. If you go the main thing to be prepared for is that it is large, and once you are in, you are pretty much there all day. So bring snacks (if you are frugal) or be prepared to eat at one of the various options on the grounds – of which there are many.

One thing my group noted, as we toured a phenomenal Vanderbilt mansion in Rhode Island the fall before is that Biltmore is really about size versus ostentatiousness. If you want to see fancy marble or something of that like go to the mansions on Rhode Island. If you want to see the largest house ever lived in by one family in the United States, the Biltmore Estate is the one.