Once upon a time I heard about a magical lunch at a famous Seattle establishment named Salumi Artisan Cured Meats.  Salumi's creator is Armandino Batali, whose maternal grandmother, Angelo Merlino, opened the first Italian food import store in Seattle in 1903.  He is also the father of Iron Chef Superstar, Mario Batali. 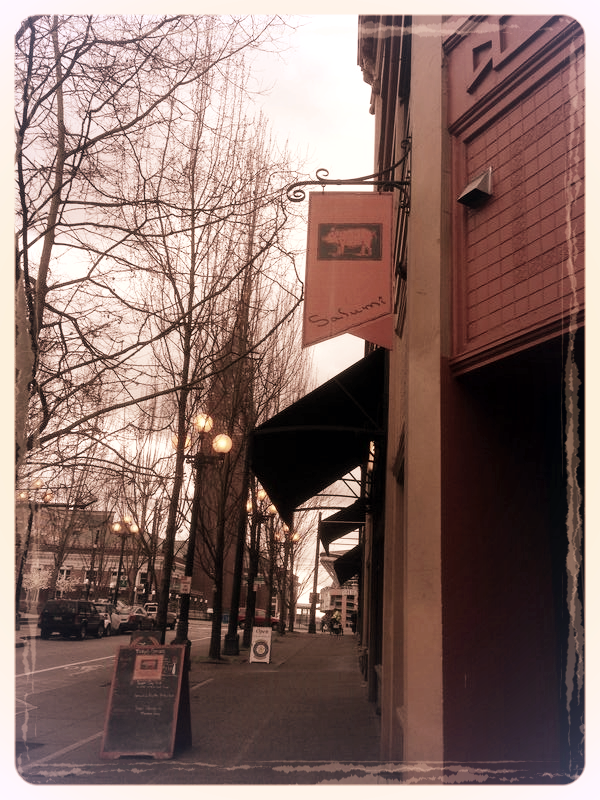 For many moons I could not even find Salumi in Seattle's Pioneer Square district, having walked by its very modest signage multiple times.   I also didn't know 8 people who could join me, planning two months ahead of time, for a lunch on a Wednesday or Thursday.  So I dismissed eating at Salumi as another "I want to be like Anthony Bordain" pipe dream.

Then one special day someone mentioned they just happened to have a spot open up at their Salumi Lunch, and would I care to join them?  I thought about it for exactly zero seconds before exclaiming "Yes! When?" 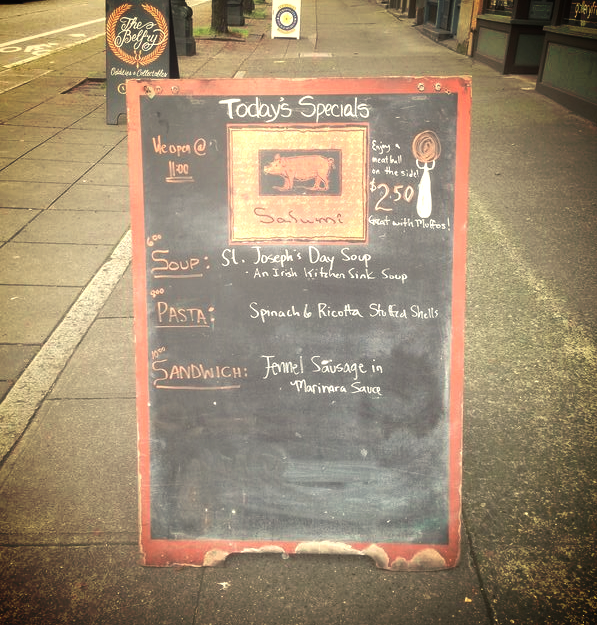 When the day came I ventured downtown using public transportation, as recommended, because we would be drinking a lot of wine starting at the hour of noon.  Using my trusty GPS on my phone I found myself walking past some of the saddest scenes in Seattle, passing the King County Courthouse and the Union Gospel Mission – then standing awkwardly on the corner of a random street in Pioneer Square looking down at my phone, up at the street signs, and searching for any sign of the famous restaurant and its notorious line.

There was no line on this day adding to my confusion.  When I finally found the door I walked in cautiously and said to the woman behind the meat counter making a sandwich.  "I'm here for The Lunch? Where do I go?" 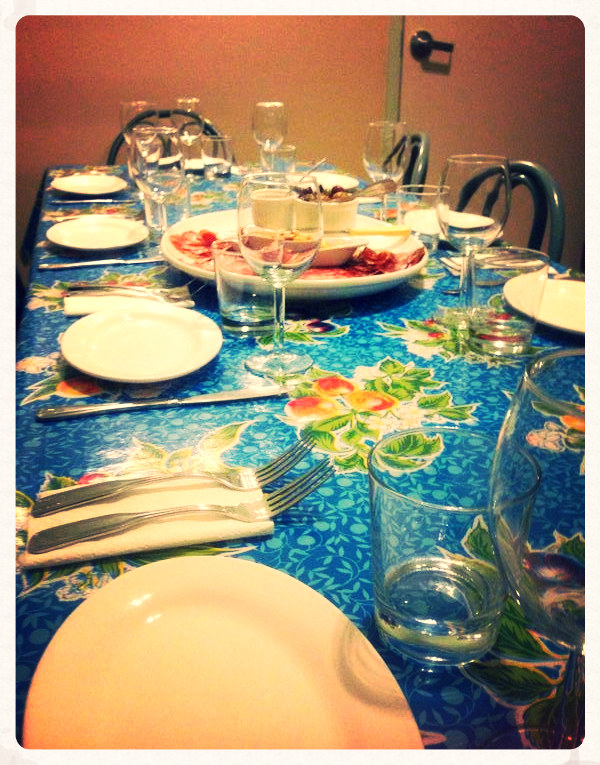 She replied. "It's all ready for you.  Go through that little green door over there.  You are the first one here."  It was 5 minutes to noon. I walked in to a meat, olive and cheese plate and the cutest place setting ever.  Before I had time to meditate on the scene and take in a couple undisturbed photos, 7 men filed in behind me boistrously talking of their lives inside an unnamed online retailer beheamoth.  I realized I was the token female food adventurer for the day.  I was ready to grab fast and furiously, and eat tiny portions to make it through the multiple heavy courses. 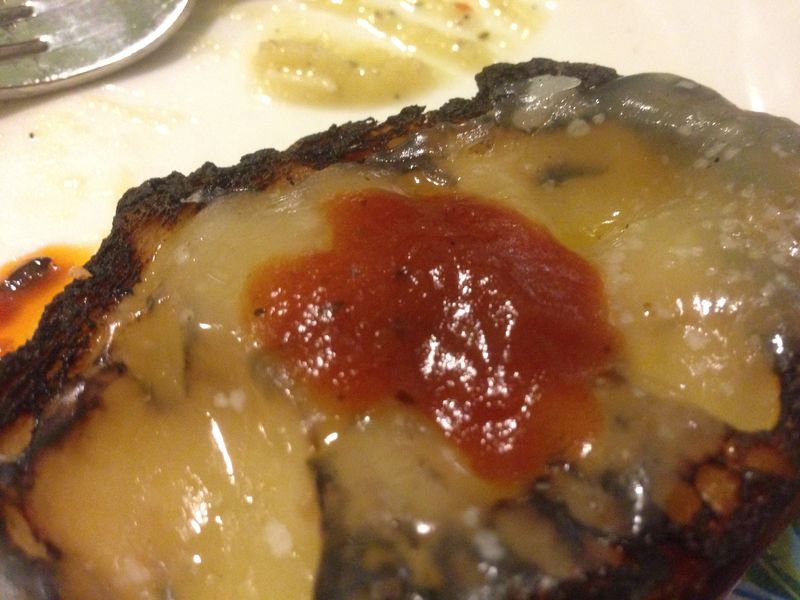 We started with a bruchetta of sorts, followed by a string of meat and green things washed down by wine. No lunch at Salumi is ever the same, and your recieve whatever the chef feels like making on that day. 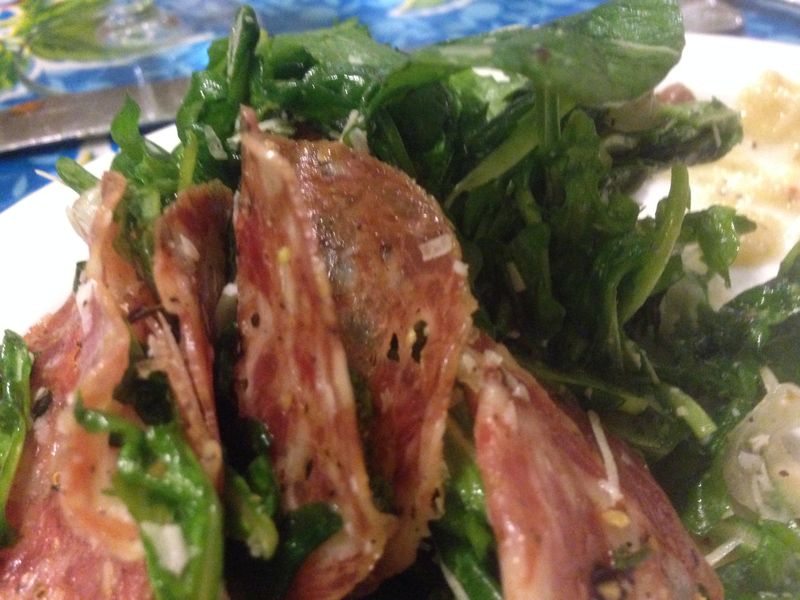 He does come and tell you about each dish and its special ingredients. 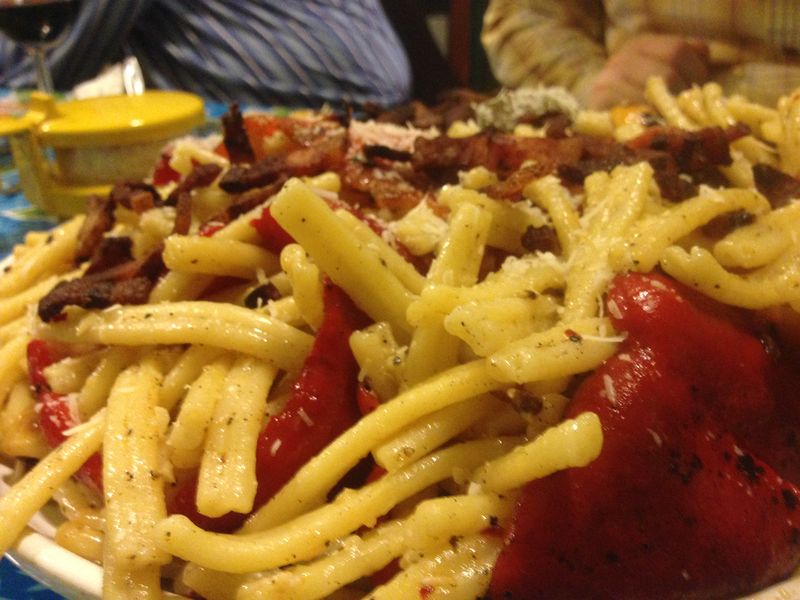 Like this particular pasta that his grandmother used to make, and now imports from Italy. He chose that day to stuff it into red peppers and mix it with little bits of porchetta that tasted like carmelized bacon amazingness.  The pasta had both strong flavor and tasty texture, I never knew such a simple dish could have so much to offer. 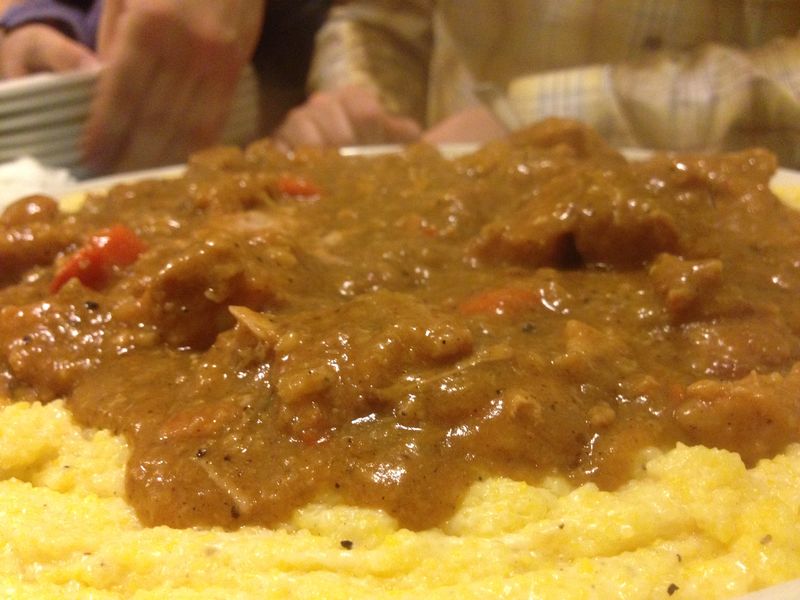 Our final dish was a peasant stew over polenta.  I could only eat a few bites because I ate all of the pasta and meat salads previous.  A pacing fail, but taste win.  I was so full I didn't photograph dessert, but it was just a plate of fruit.  Think grapes in a bowl, and you've got it.

All-in-all the 8 of us managed to drink 9 bottles of wine, coming in as about average for The Lunch customers wine consumption, and way behind the group of 9, 70+ year old opera docent ladies who apparently drank 23 bottles on their own.  Wow. 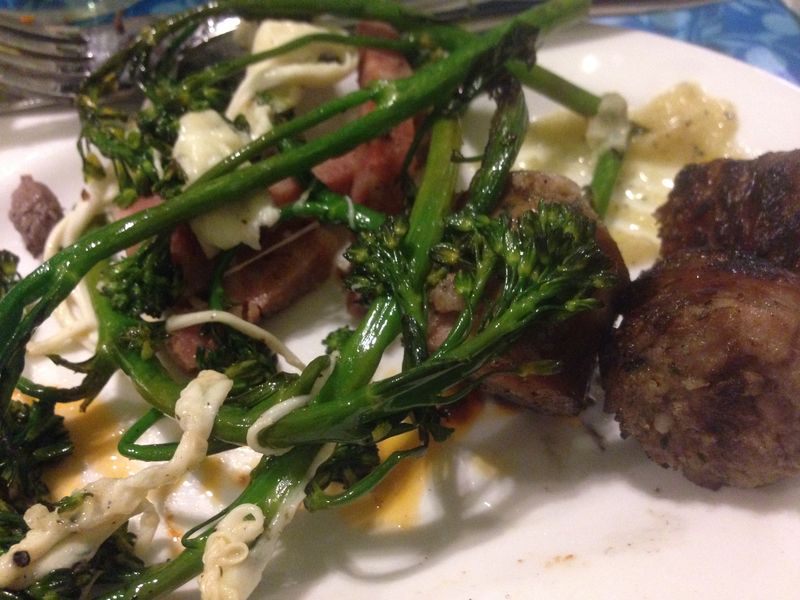 It was a food adventure to remember.