There was no denying the chill in the air when I got up on Monday morning in Speyside. There was a little bit of white stuff on the skylight window that I tried to pretend wasn't there – the cows on the hillside staring back at me however, were undeniable. 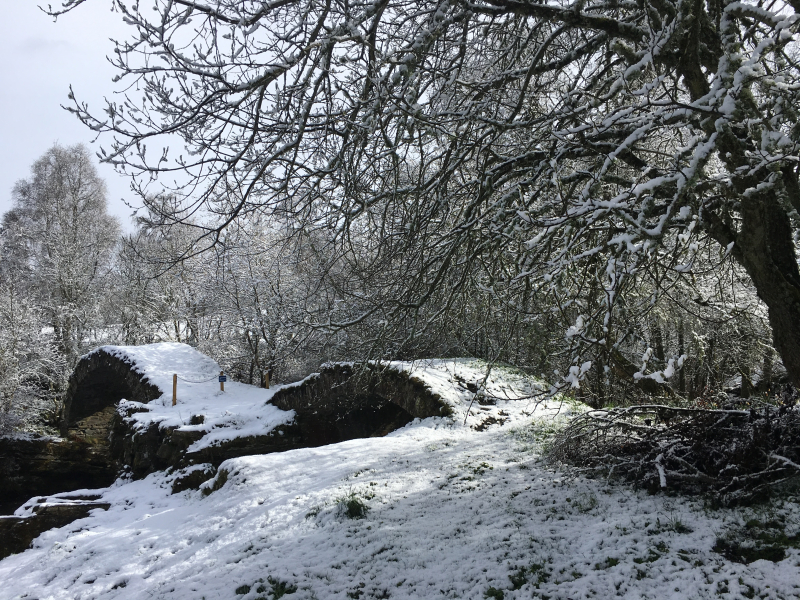 The cows were not a surprise anymore though, after days in the Scottish countryside the rural sights were finally beginning to feel familiar and comfortable. The lack of dense humanity around me was pleasant and I finally after a tough few months of stress for multiple things was officially relaxed. Although I realized I never wanted to go on a two person adventure ever again, I need to be alone, or alone in a group, or alone in a small group, but two people is just two people and the proximity of one person is just, well, one person and gets really hard for me after a couple of weeks. I needed a little more space just like my salmon and scrambled eggs on this fine crisp morning in Scotland. I also wished I had another week in Scotland just to explore castles and Pict ruins and other historical locations besides distilleries – but the planned agenda must go on and this fine Monday had a lot to offer as far as more interesting tours and tastings. 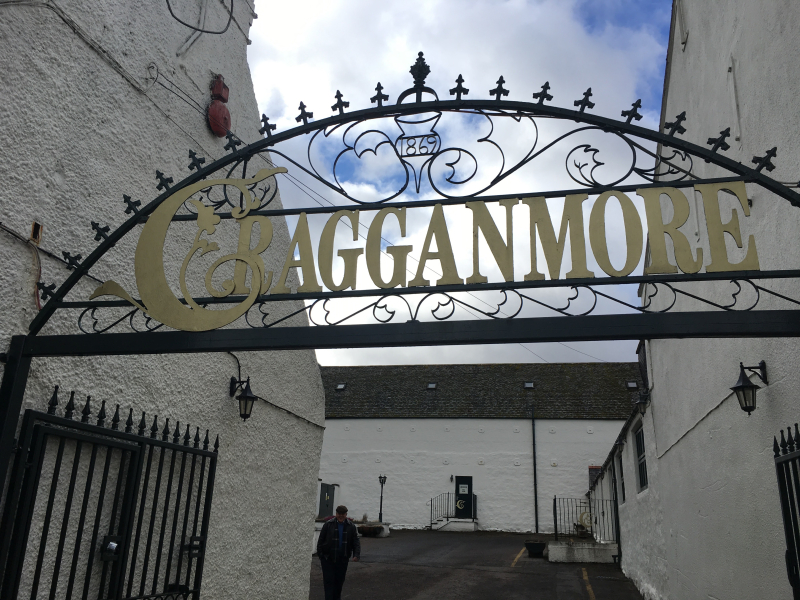 Cragganmore distillery was founded in 1869 alongside the brand new railroad in Speyside. Its founder Adam Smith, a "very large man" as stated by our tour guide needed to get into the cattle car to enter the train as the human train doors did not fit him. He apparently had as much vision as girth as the whisky made at the distillery was able to be carried away by train car, as was the barley able to be brought in. 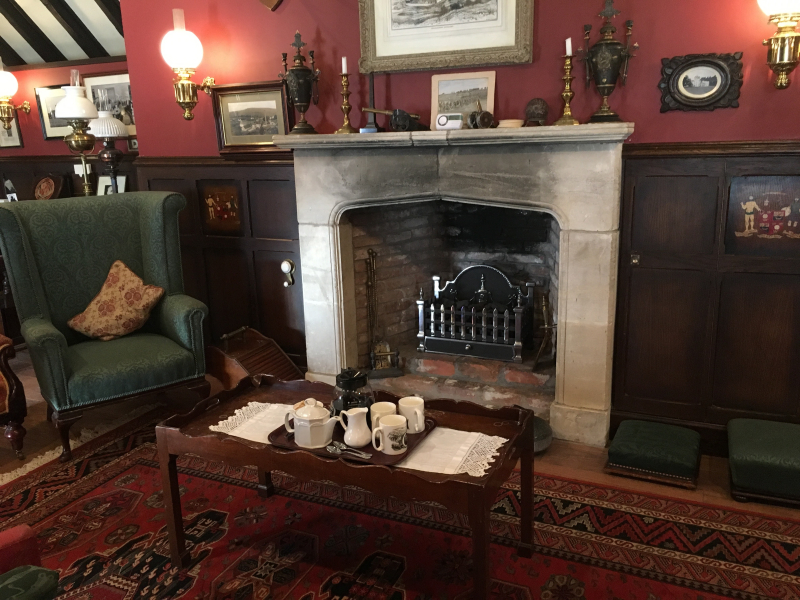 This tour began in the historical office/study of Adam Smith and his son Gordon. Adam died in 1886 passing the running of the distillery to his son Gordon who did major renovations in 1901 to improve production as well as eliminate a problematic rodent issue. We were able to look at Gordon's original plans and books. 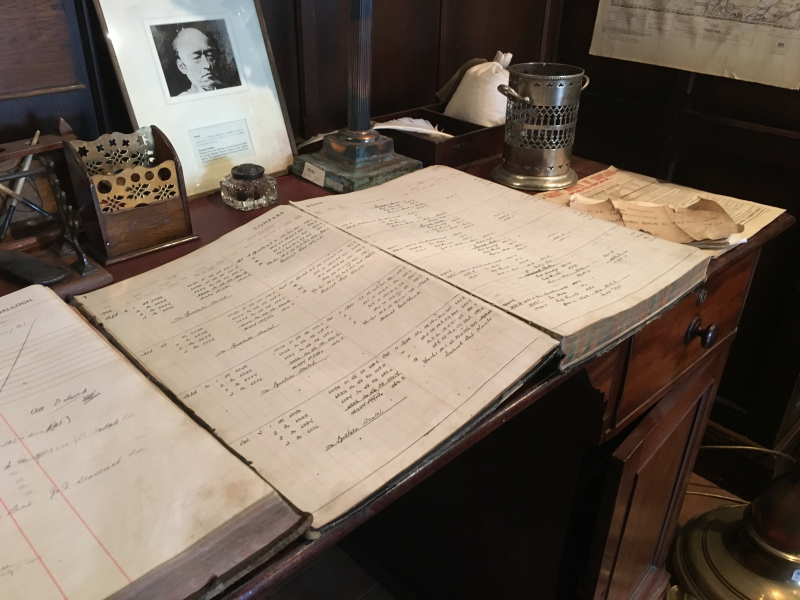 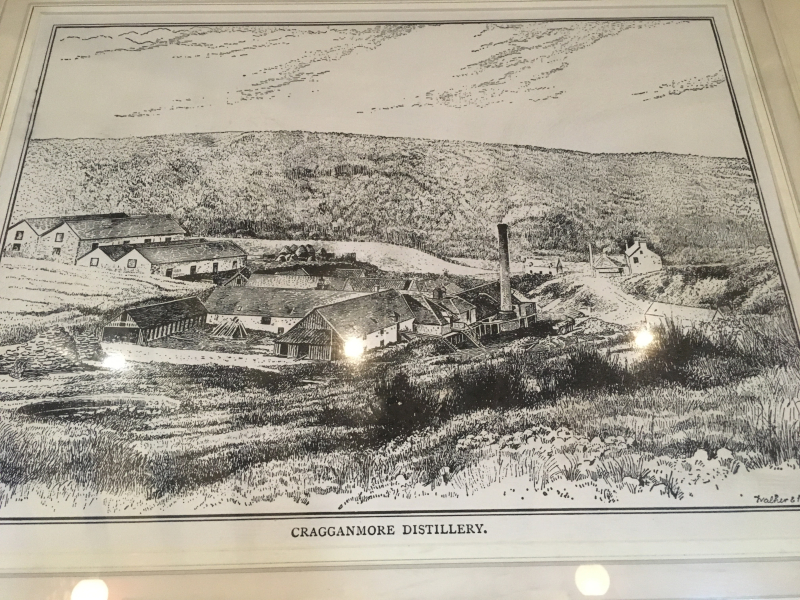 Cragganmore currently produces 2 million litres of whisky per year and they claim they have a most complex flavor, thanks in part to its 75.2 meters of copper tube worm pipe attached to their 4 stills. Having never tasted Cragganmore before entering the distillery I took their word for it, as I soon knew I would get to try for myself. 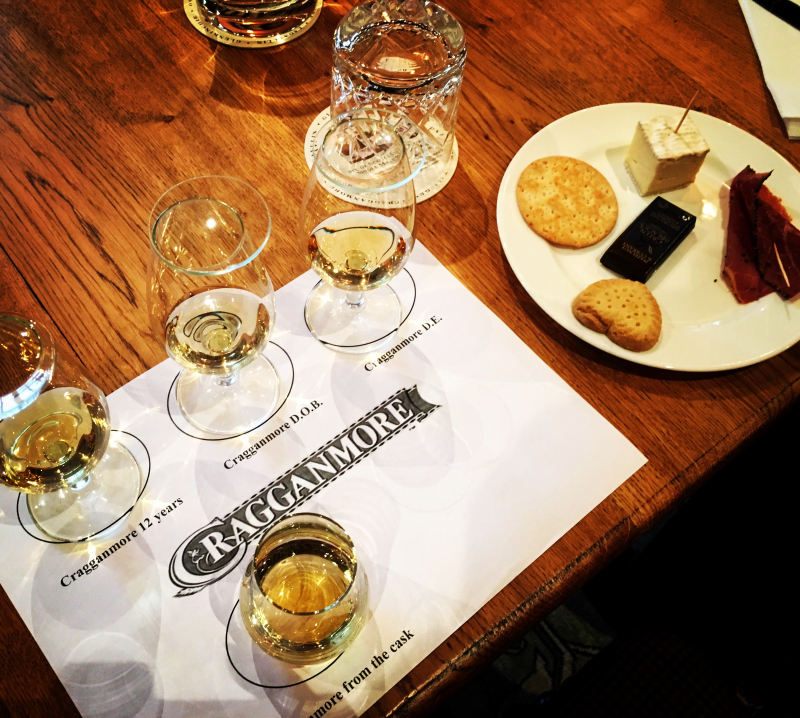 This tasting was unique in that we got to pair the whiskies with food. Pastrami, short bread, crackers and brie along with the Cragganmore 12 yer, Distiller's Edition,  Distiller's Own Bottling and the Cask Strength 12 year. My favorite of the whiskies was the Distiller's Edition as I could taste the Port cask finish. The 12 year was the best pairing with the short bread, as did the Distiller's Own go really well with the pastrami – who knew? It was fun to pair the tastes and get a second breakfast in. Something different than whisky for second breakfast and lunch. 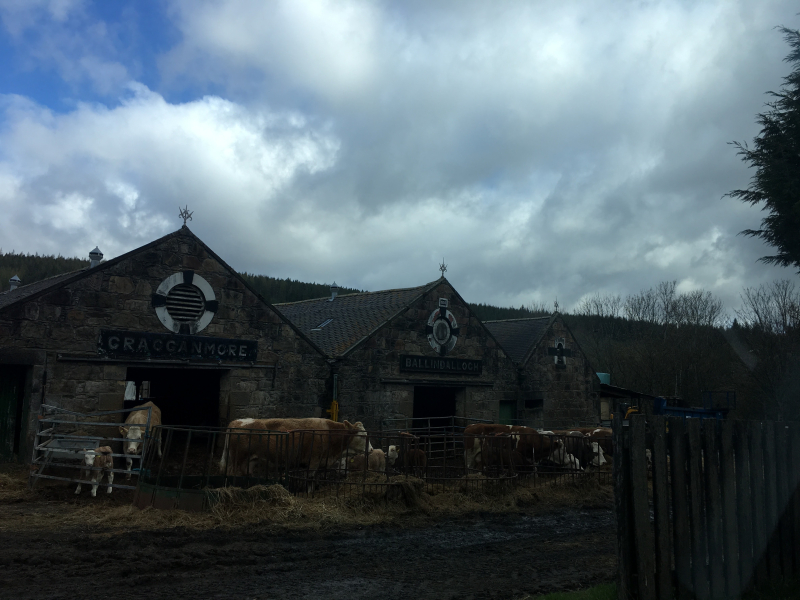 Meanwhile, there were actual snowflakes falling from the sky as we made our purchases in the gift shop and tried a taste of the 20 year aged Cragganmore just because it was there. Then we were off to The Glenlivet for lunch and another tour followed by a special tasting. 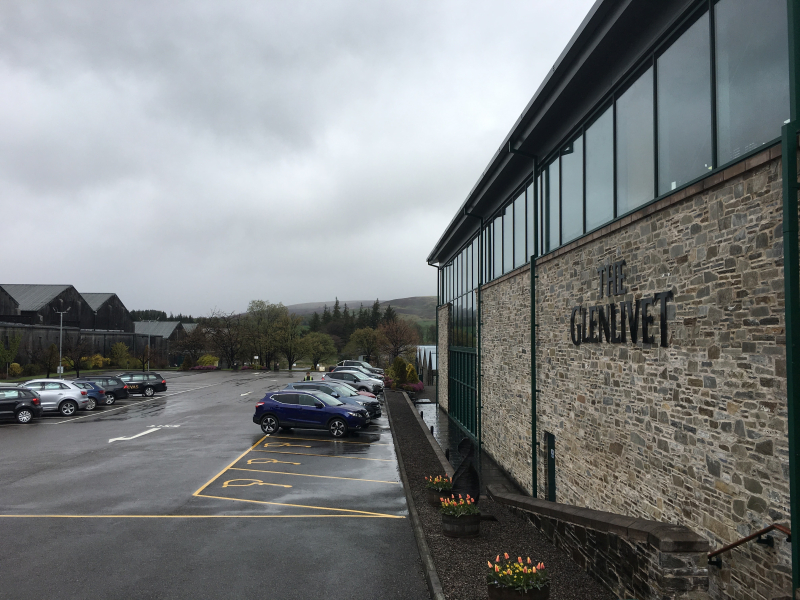 When we went in to The Glenlivet the parking lot and visitor's area looked like this. Then, while we were having lunch, this started happening. 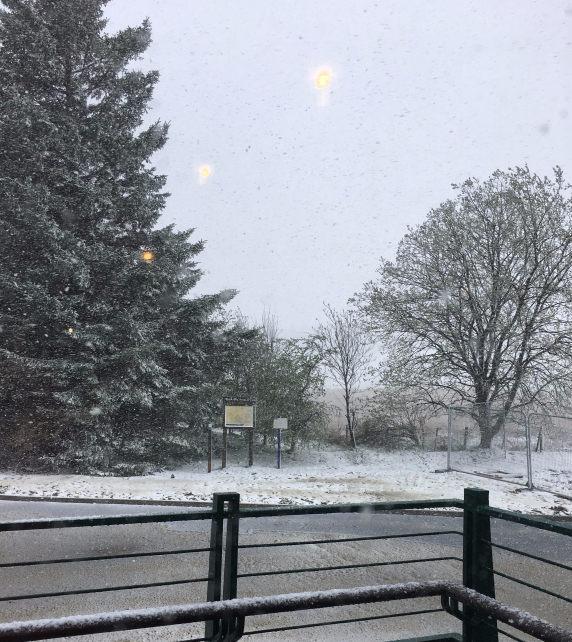 Meanwhile, I found haggis flavored potato crisps so I was preoccupied with flavor and decided to ignore the white stuff – thinking it would disappear in 5 minutes. 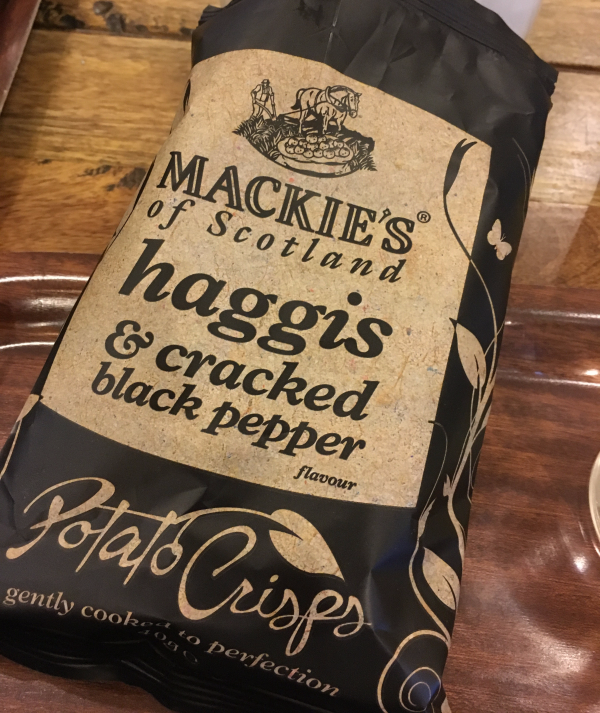 They really did taste like haggis on a potato chip. I would buy these on a regular basis if available in the United States. 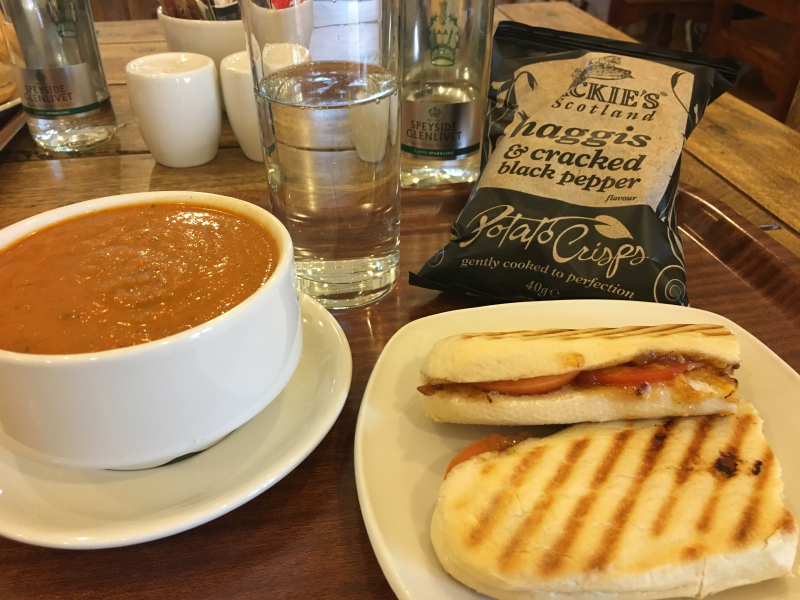 They were the most interesting part of lunch really, except for the experience of learning that "whisky pickle" is not a cucumber soaked in whisky vinegar but instead a kind of sweet chutney substance – so my grilled cheese panini was sweet and cheesy versus picklely and cheesy. My soup was tomato zucchini and also quite tasty but nothing as exciting as powdered haggis on a potato crisp. 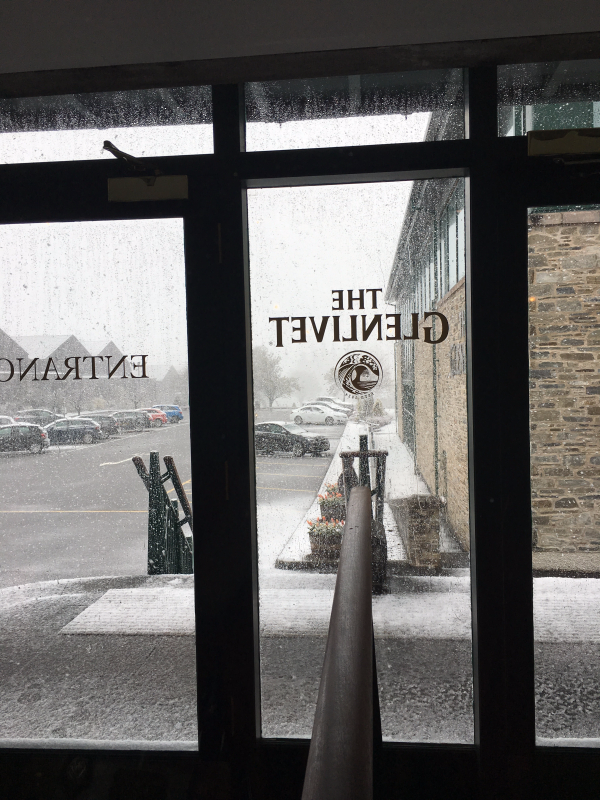 Meanwhile, outside the visitor's center, museum, gift shop and restaurant complex the snow kept falling and made no sign that it was stopping any time soon. 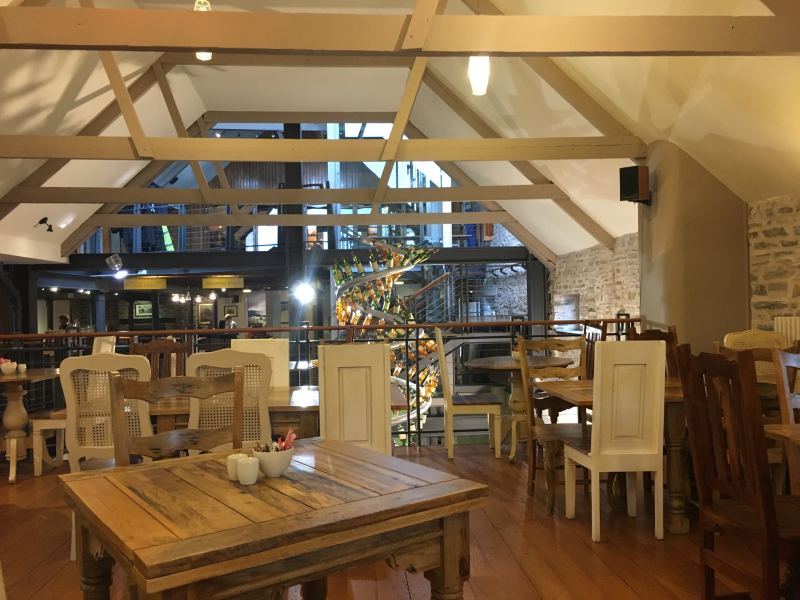 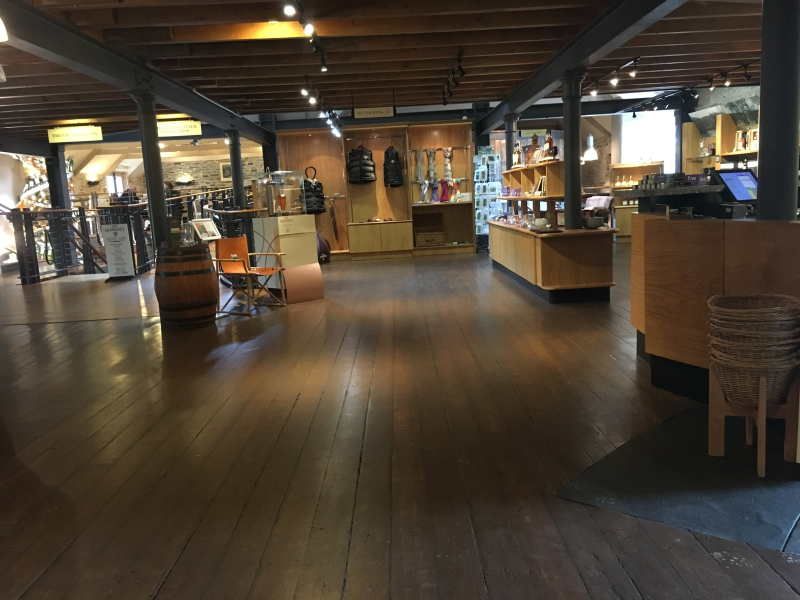 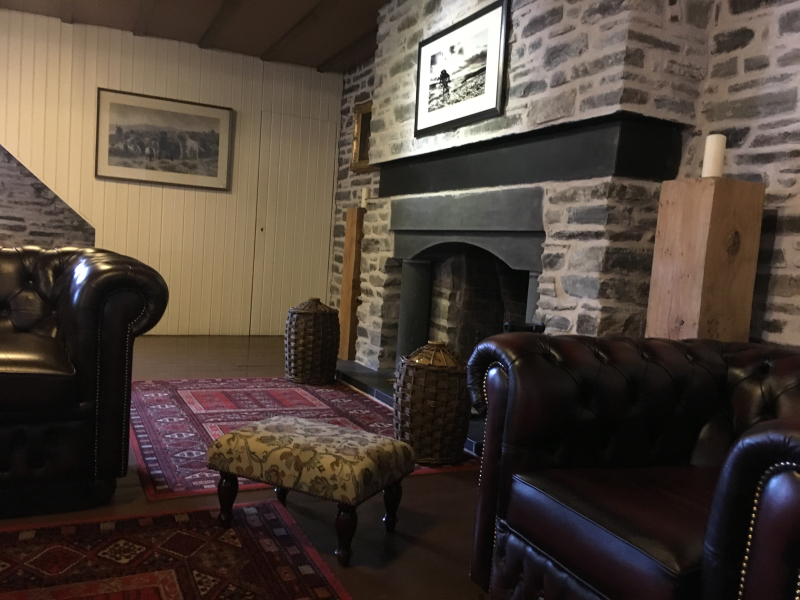 To say that The Glenlivet is a big facility for whisky and visitor alike is an understatement. They are huge just like their world distribution is vast – and their state of the art distilling facility has large walk ways and a window door thing that can be opened to replace a still so you don't have to take the entire roof off the distillery to do so. Forward thinking went into this facility both for tourism and production. 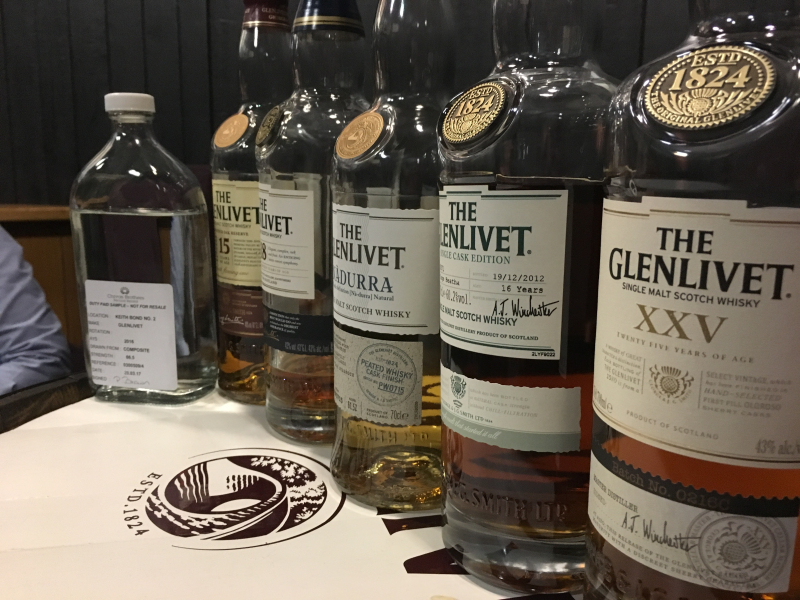 The Glenlivet was founded in 1824, the year that it was possible to make whisky legally. The other individuals making whisky in the area in their illicit stills were not too thrilled when Glenlivet went legit because it brought the excise men and attention to their illegal operations in the area. The founder was given a pair of guns that are still on display in the museum for "his protection" as a result of all the negative attention from his "colleagues." As a result, Glenlivet became known as The Glenlivet thanks to being both the first legal operation and its gun-toting founder. Meanwhile, nearly 100 years later The Glenlivet is found the world over and makes 10.5 million litres of single malt whisky per year. 88% of its yield is exported. 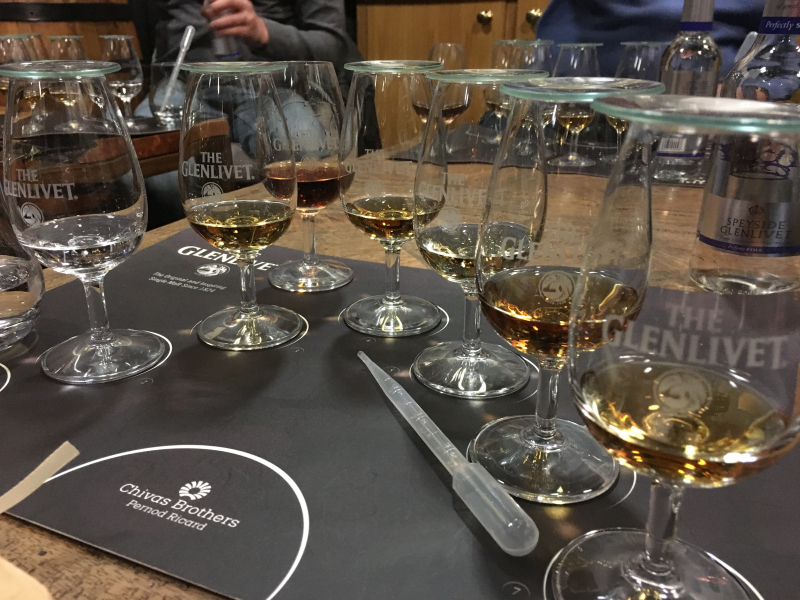 As we went from the still room to the warehouse we had to walk through 3 inches of snow and blowing wind with pelting white flakes that covered our faces and coats. Inside the warehouse awaited a sherry cask 12 year old that we got to taste. It is the dark red glass in the background of the photo above. It was the most phenomenal Glenlivet I've ever tasted or will taste, because of the strong sherry marrying with the spirit. We tasted six others in this sitting including the 15 year, 18 year, peat finished Nadurra, Uisge Beatha a 15 year old sherry casked lovely, and the 25 year old. The 25 was the best hands down, second only to the cask tasting. 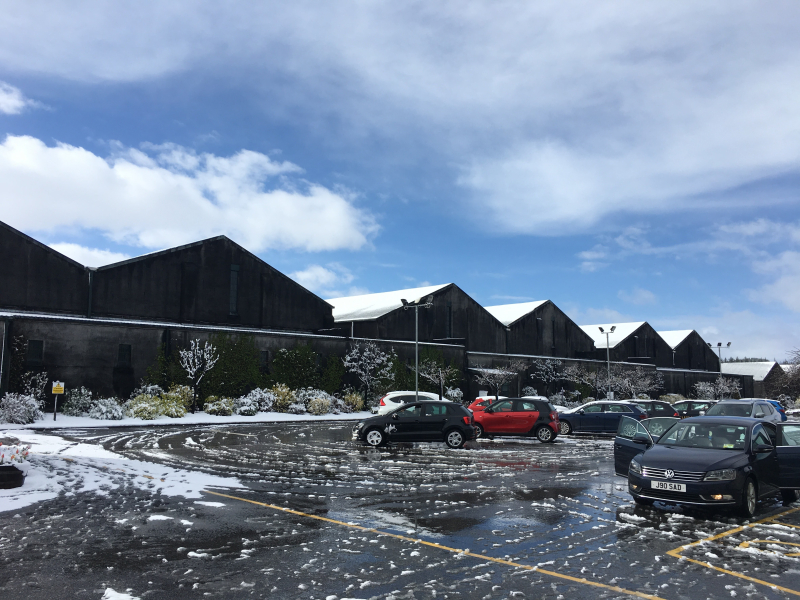 During our tasting the blizzard conditions subsided and most of the snow melted. But it left the formerly green countryside a pure white spring/winter wonderland. 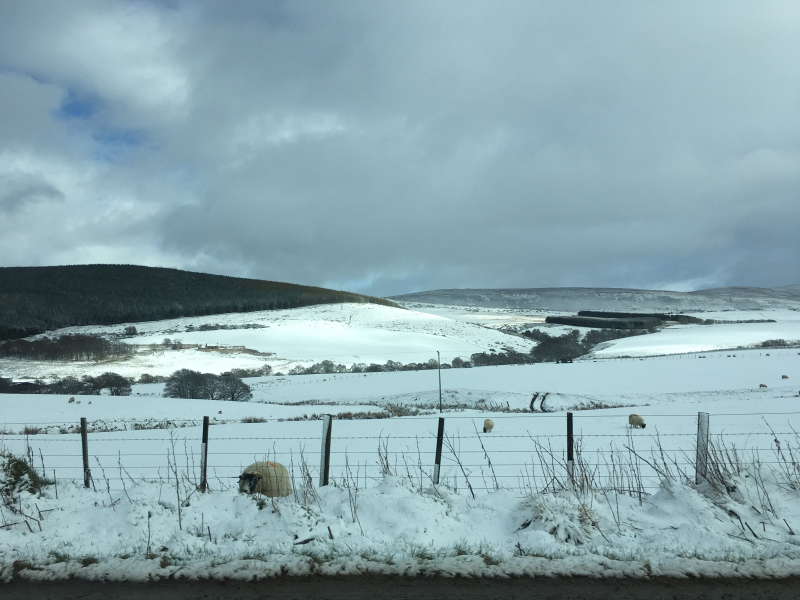 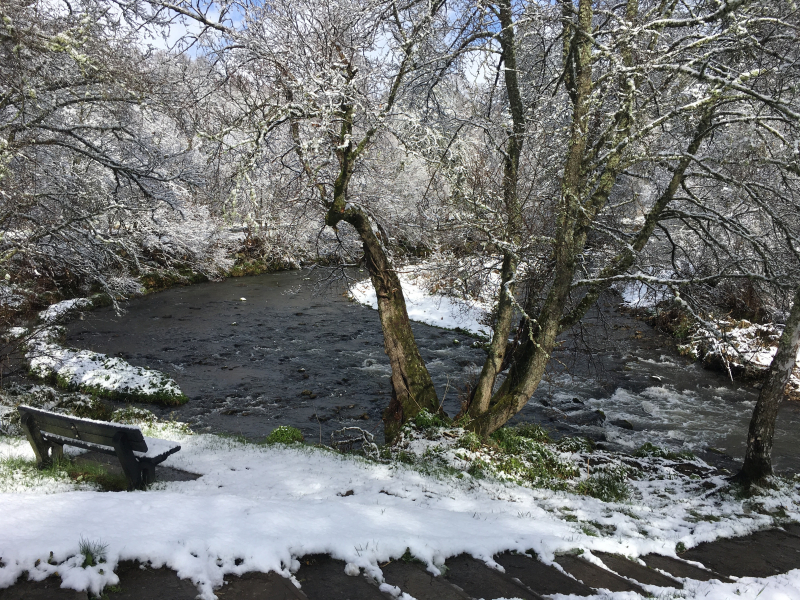 As it was our last night in Speyside and Dufftown so we returned to the Stuart Arms for dinner where I was able to complete my collection of forms of haggis tasting with deep fried haggis nuggets. 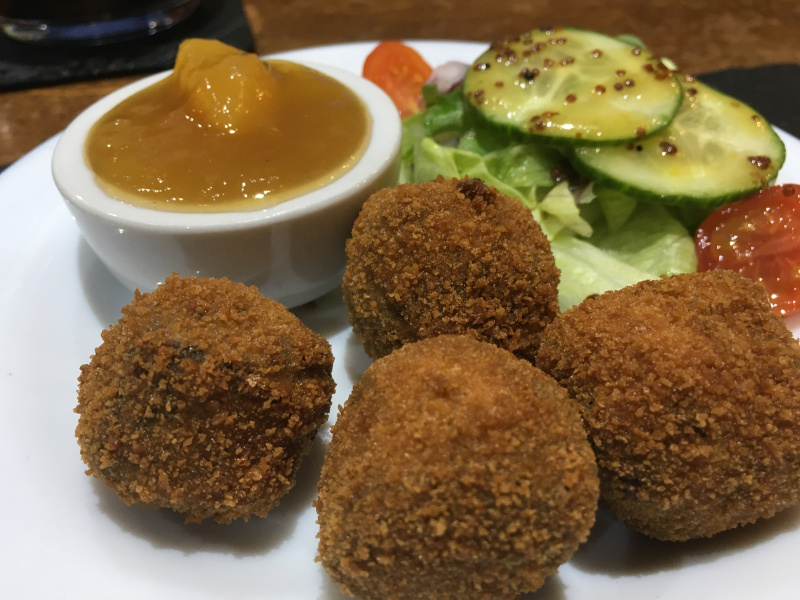 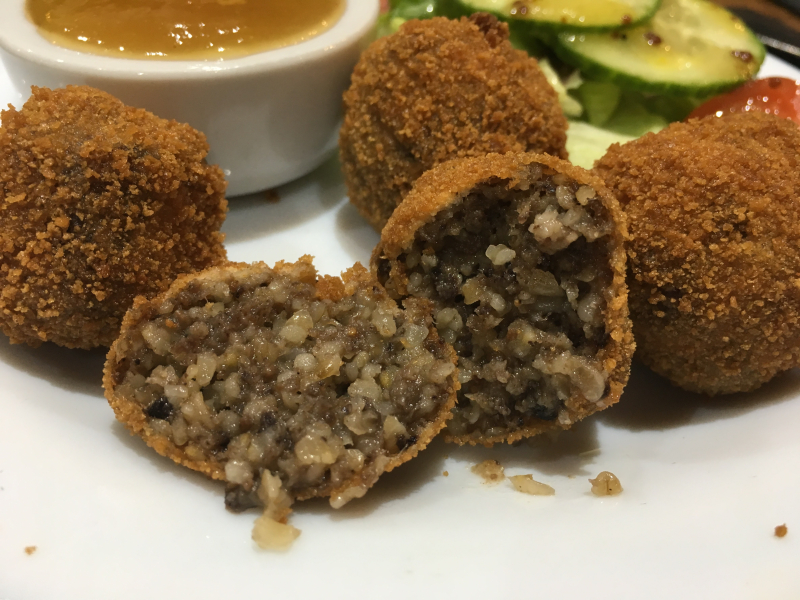 It tasted like haggis with a crispy deep-fried outside, but its bite-size-ness made them the most pleasant haggis to eat of all the haggis I tasted in Scotland.I followed them with a great debate on whether or not I should order the fish and chips again – then settled on the mac and cheese because I hadn't had mac and cheese in Speyside region yet. 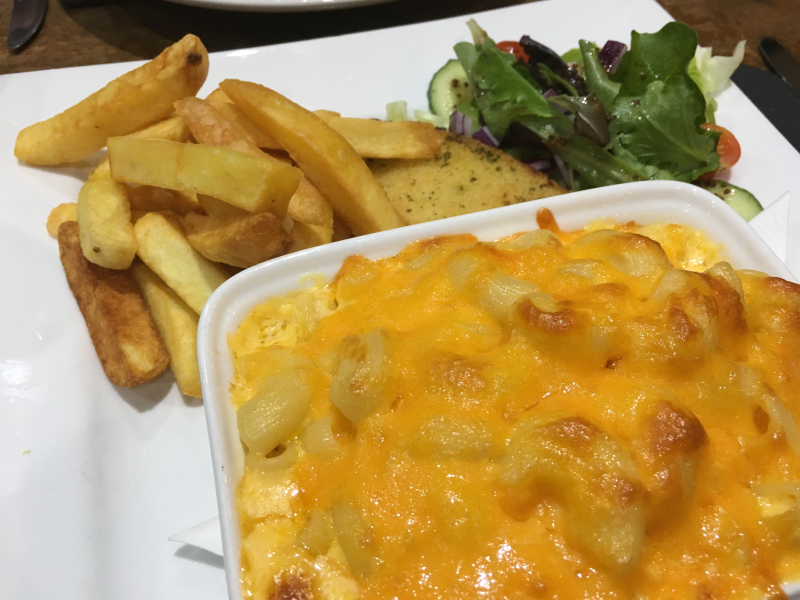 For dessert we had a side of blizzard. 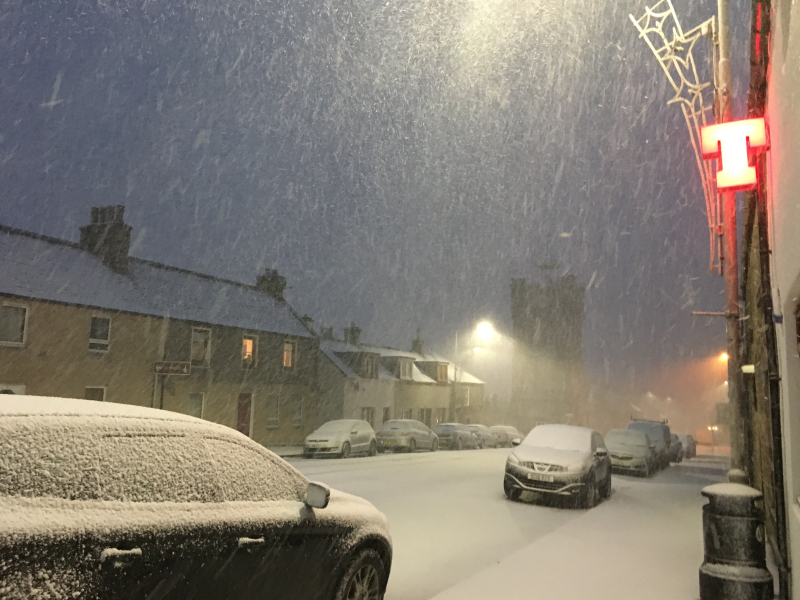 Which even took the locals by surprise. The poor girl just leaving her shift with us only had tiny slipper flats on and she needed to walk home – I hope she got a ride instead of frost bite on her feet. We luckily had a very professional driver from Dufftown Taxi who reported the bus full of the Russian and Ukrainian contingent visiting Glenfiddich had gotten stuck in the snow. It was an exciting night for everyone. 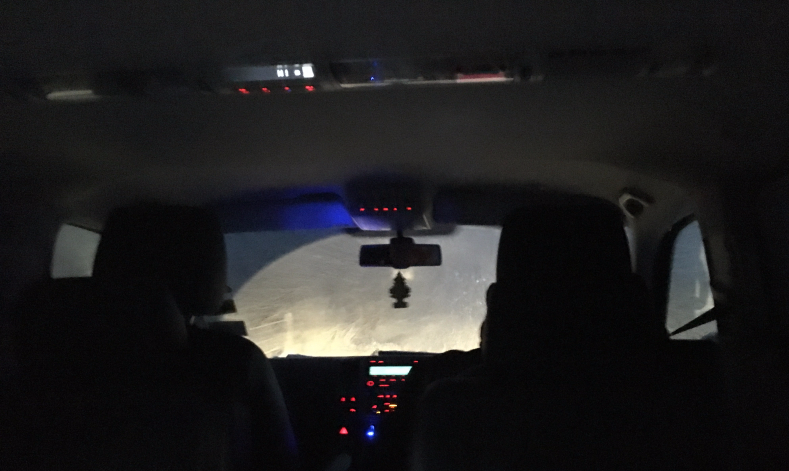