I had no idea what was in store for me when I left my house this morning. I was just excited because it was the first day of my long awaited vacation and trip to Scotland. I celebrated my thoughtful and light packing – getting luggage down to 10 kilos for our tiny flight in the middle of our trip from Islay to Oban.  I was happy as a clam (who had no idea that they were about to be boiled in a frutti de mare). Two days ago a friend of mine said "Mercury goes into retrograde on Tuesday, just in time for your trip, double check all of your details." I did, but for other reasons, and decided now was the time to not believe in this astrological phenomenon, and think as positive as possible.  As I sat on the light rail heading toward the SeaTac airport Wednesday morning I got a call from a KLM representative in Amsterdam telling me my flight to Glasgow was cancelled. 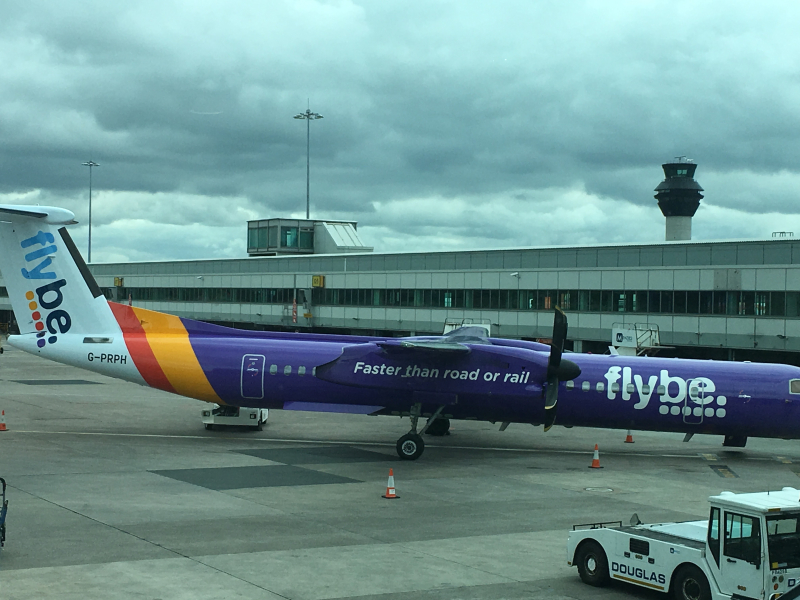 No!!!!!  But wait, I was re-booked immediately, as were my traveling companions, on a local airline called Flybe through to Glasgow.  The result, actually getting us to Glasgow earlier than predicted even though there was one more flight transfer.  It was a win win.  Nothing to worry about. 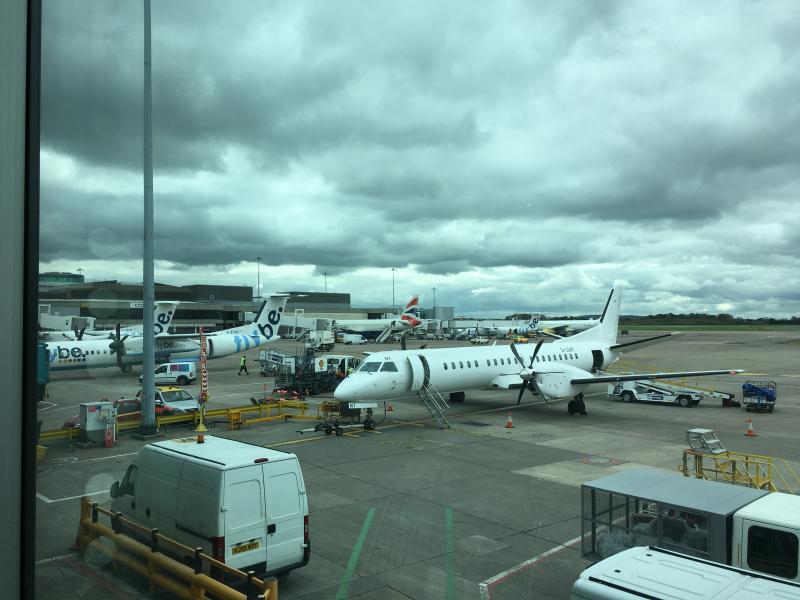 Then I got to the airport.  I couldn't get a boarding pass from the self check-in kiosk so I walked up to Special Services line and presented my situation to the representative.  He spend over 20 minutes on the phone muttering and shaking his head. Finally he asked me if I had any bags to check then presented me with a single boarding pass and said –  "Flybe is not one of our [Delta] partners, you will have to get a new boarding pass in Amsterdam for the rest of your trip. But I fixed the mess They made of this ticket for you."  I replied to his statement with a hefty bit of gratitude, a large relieved smile, and the question – "What about our luggage?" He said oh-so-reassuringly in return, without a smile, "It will go right through."  I repeated back with continued appreciation for his service, "So… I do not have to go pick up my luggage in Amsterdam, go through customs and recheck it on Flybe?" He replied, "Correct – though I would double check when you get there if that is actually the case, I really don't know." 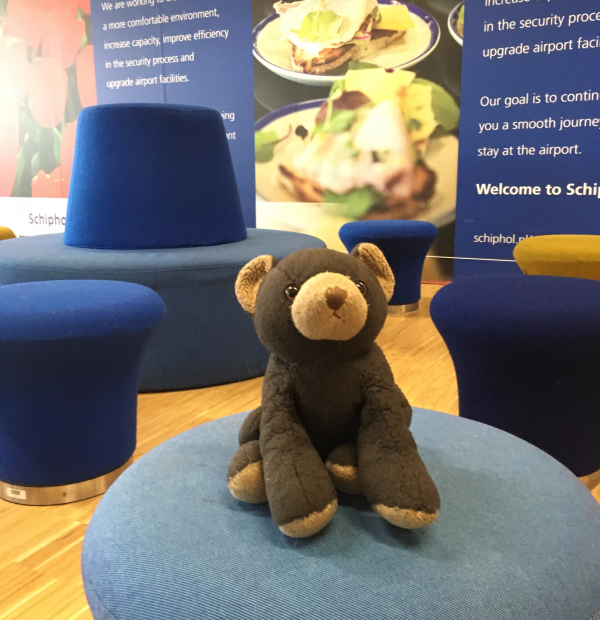 So we made our journey to Amsterdam and took int he sights of Schiphol airport – including a lovely ham and cheese sandwich and some espresso after we walked over two miles from gate-to-gate trying to find anyone willing to issue us a boarding pass. 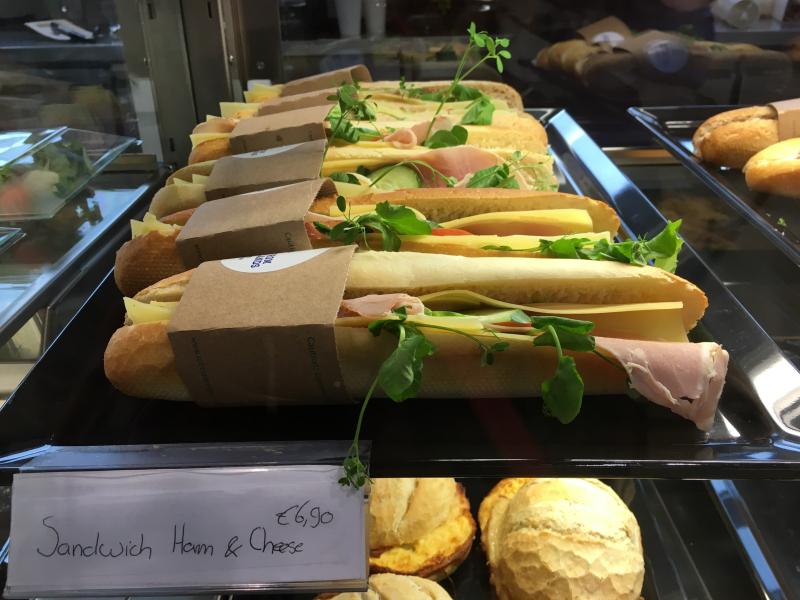 Boarding passes are apparently very difficult documents to get in the Amsterdam airport when transferring airlines due to cancellation. Finally, after much walking and chatting up various official looking employees, we found a very nice uniformed woman at the KLM tranfer desk hidden behind a fence of self-serve kiosks (its like they put her there to purposely to prevent her from actually being found).  Anyway – we approached and presented our challenge.  She went and conferenced with two other employees at the KLM desk then came back to us and said, "Don't worry, you are in the system, just show up to this gate 30 minutes before departure and everything will be OK." 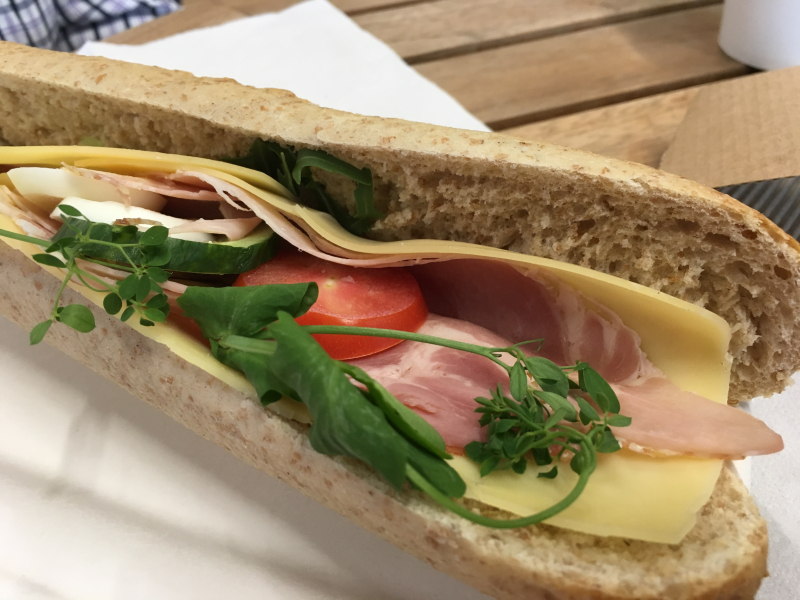 I really wanted to believe it would be OK. And I did for the brief moment I ate this sandwich complete with pea shoots and cucumbers that jumped with flavor (who knew airport sandwiches could taste this good). And well, everything was mostly OK – for us as passengers, but I had a sinking suspicion that my luggage was about to go on an extra special side trip.  But I put that our of mind and tried to think positive as we went through our next two flights. 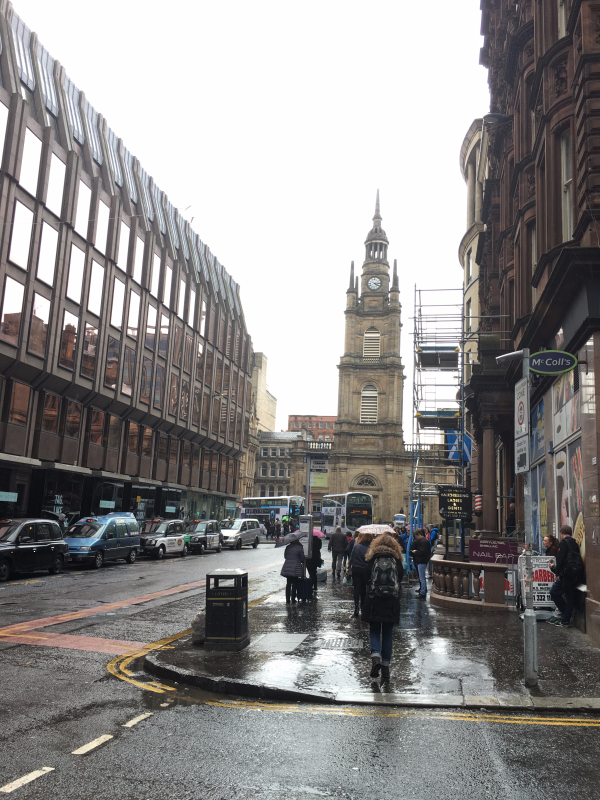 When we arrived in Glasgow at 13:00, Thursday April 13, tired after an full 15 hours of travel we went to the baggage check and waited, and waited, and read the sign, and waited some more – until nothing came out on the conveyor belt. I sighed in recognition of my intuitive correctness, and wished this time I had been wrong. I surveyed the bleak seen for any sign of a luggage office and dug for my luggage receipt. I was about to lose hope when the people who take care of this sort of thing appeared and beckoned us into the office of lost luggage. 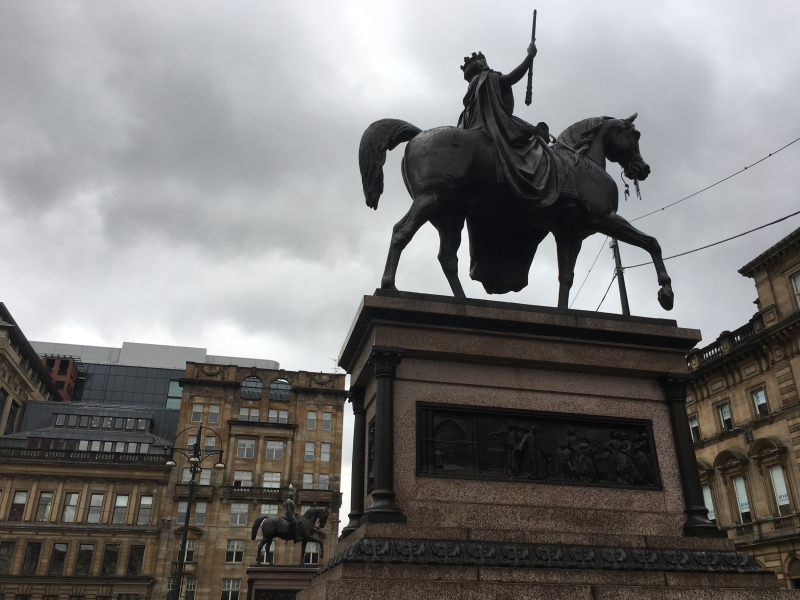 "Fill out this form."  Said the man behind the desk as he started madly typing and asking us questions.  "What color is your luggage? Hard back or soft? Does it have a brand name? Is your name on it?"  etc. meanwhile I filled out the same information in the questionnaire in front of me and provided my phone number. After our exchange and provision to him of our form describing our lost luggage – the fellow behind the counter provided us with a new document with a phone number on it.  "OK – here you go. We'll let you know when we locate your bags and will bring them to your address."  We replied a little panicked "Do you know where our luggage is right now?" The two other people who appeared behind the counter with the man stopped what they were doing and looked at us, seriously, and slightly concerned – then one of them said – "Well, no – we have to locate it first to answer that question – but give us a call around noon tomorrow."  Eek!  "Um, we travel Islay tomorrow on Flybe at 8:30 in the morning."  Blank blinking stare – "Oh good then you should be able to pick it up before you fly then, if its here."  The prognosis was bleak. 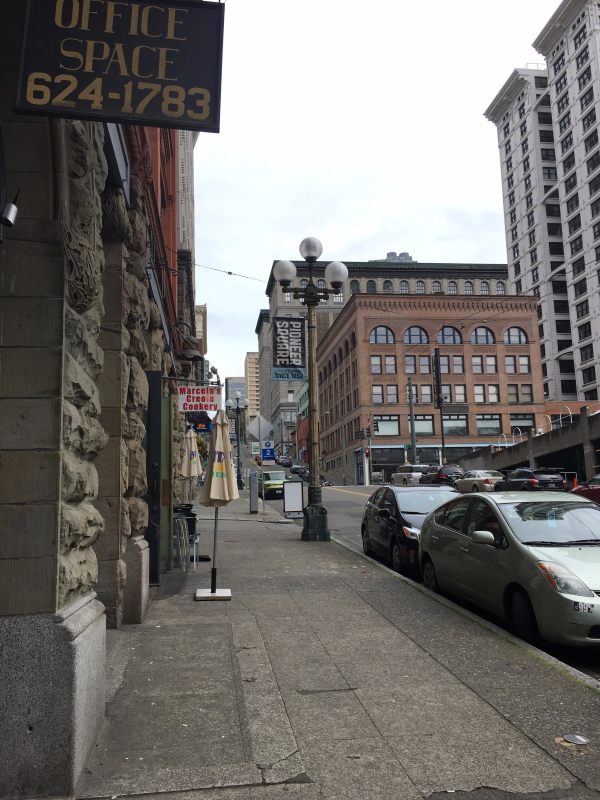 I had no coat or head covering, because I had shoved them into my checked luggage at the Seattle airport.  I had no phone charger, I had no computer charger, because for some reason I thought it was a good idea to also put these in my checked luggage. Electronic device battery life anxiety began to set in.  What was I going to do if I didn't have a phone for them to call me on to say they had my luggage?  What if I couldn't take pictures for my blog?  OMG what if, what if my computer died and I couldn't document my trip word-for-word? Not the blog! Anything but that! I tried to look at the bright side and keep calm to set a good example for my traveling companion – I was the seasoned world traveler after all. This was just a minor set-back – I would be OK. Meanwhile, I inventoried what I did have. I had antiperspirant, powder for my face, the clothes I was wearing including a scarf, and our itinerary that got us to our flat in downtown Glasgow – where it was raining. 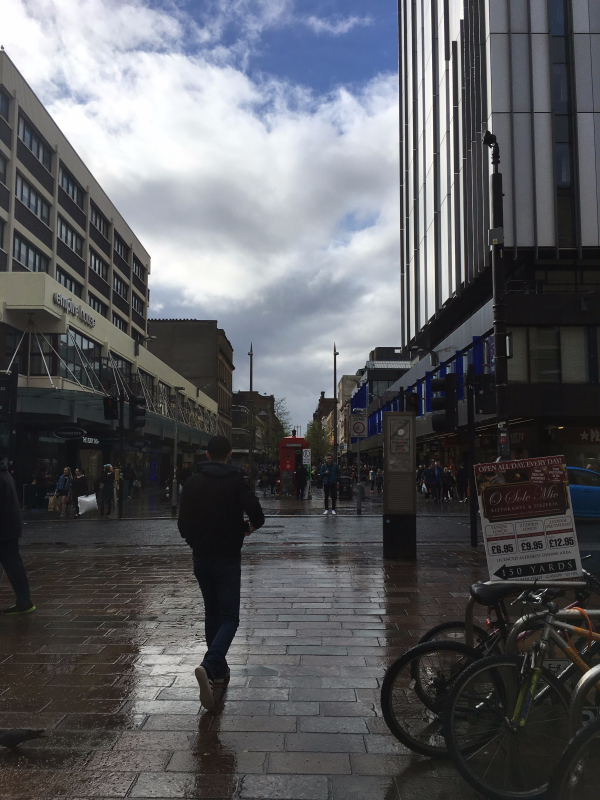 There is nothing like a beautiful rainy spring day in cheery downtown Glasgow without a coat. John, my traveling companion, who did not have a hat, because it was in his checked luggage, was confused as to why I kept stopping, in the rain, to take pictures. I apologized for his dampness but explained that documentation and photography must still continue – despite our current circumstance.  He looked at me like a crazy-person.  Probably for good reason – but the show must go on. 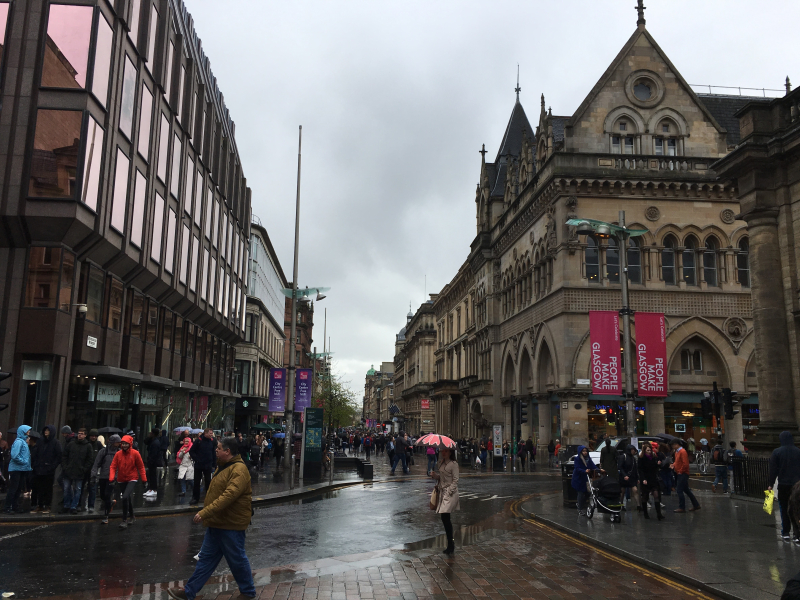 We did however go and buy me a new coat, a UK USB phone charger, and a couple toothbrushes to stave off the impending doom of being part of the lost luggage tribe. It was also time for a drink and a snack to stop the hangry that was sneaking up on me. 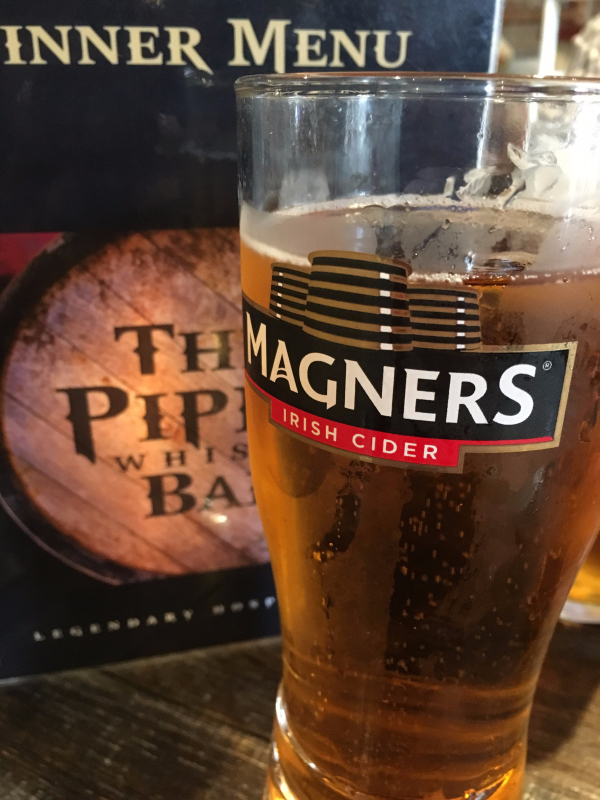 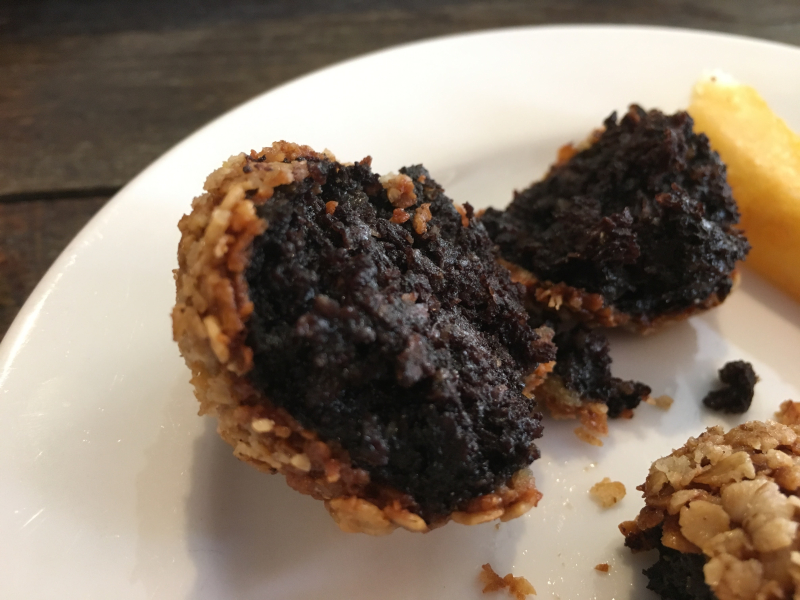 It was perfect timing for a cider and a snack of deep fried black pudding balls. Nothing like a wad of blood and oatmeal washed down with fermented apples to bring levity to the situation. It was all we could do besides shop anyway, as in our distress and need to procure items to make-up for our lack of luggage – all the museums were now closed and I had no contingency touristing plan. 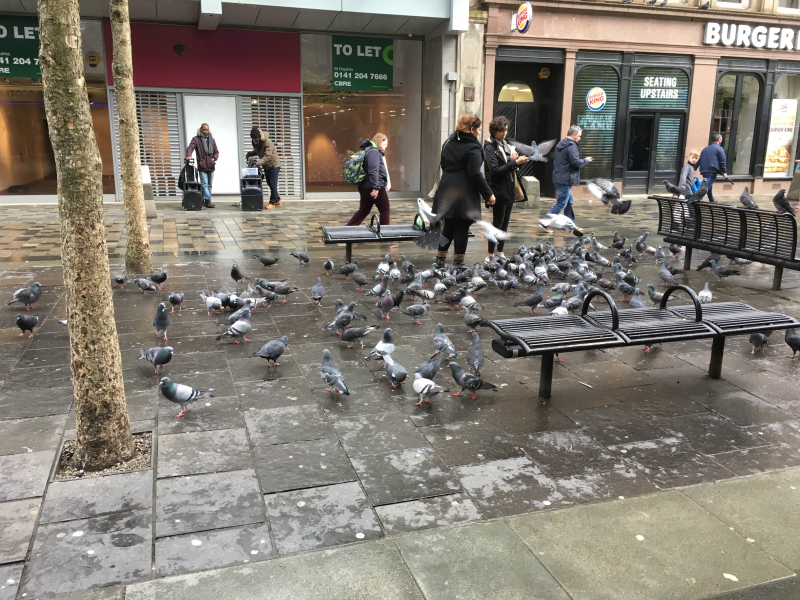 There is nothing like the overarching concern of whether you will be wearing the same socks and leggings for the next week to overshadow a first visit to a new city.  Before we knew it, however, it was time for our dinner reservation at Ubiquitous Chip. 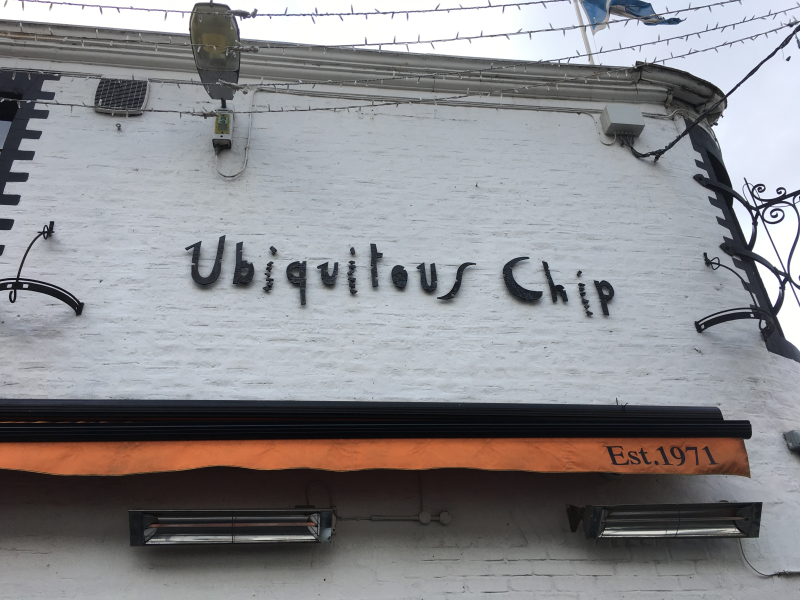 The name of Ubiquitous Chip is a tongue and cheek reference to the prevalence of fried potatoes in the modern Scottish diet – but they do not serve chips. 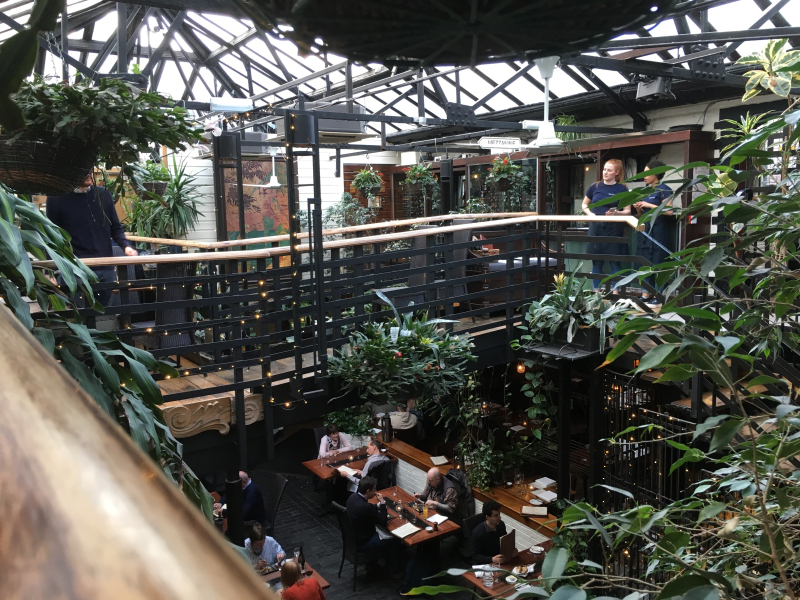 Established in 1971 – Ubiquitous Chip was the first of its kind and ahead of the trend – dedicated completely to local, sustainable, fresh and seasonal ingredients. Now everyone in Scotland who is fine dining features all Scottish ingredients. 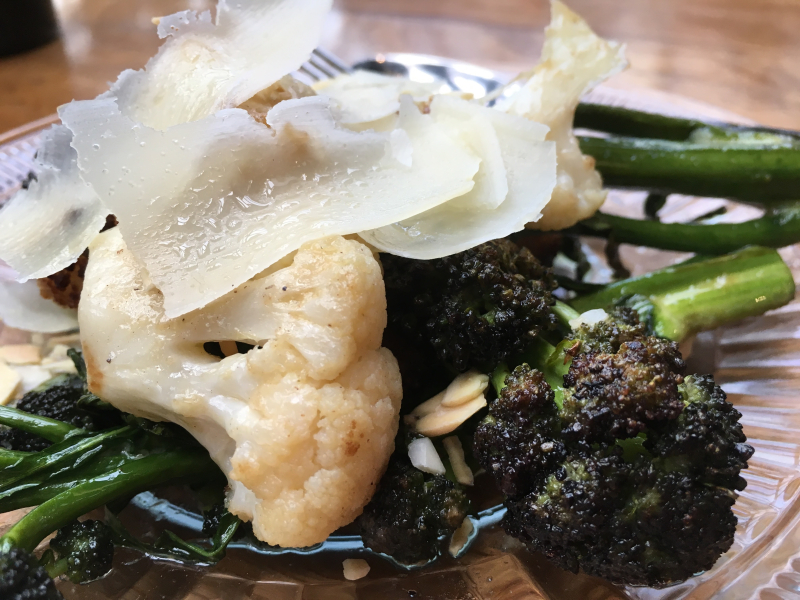 Ubiquitous Chip is still the leader, however, as everything on its menu is harvested by the owner from the restaurant's gardens/farm or hunted and killed from the local forests. This is the definition of hunter gatherer farm/forest to table food. When we asked where does the venison on the menu come from our wait staff member replied, "The owner goes out and shoots it." No geographic location was provided. 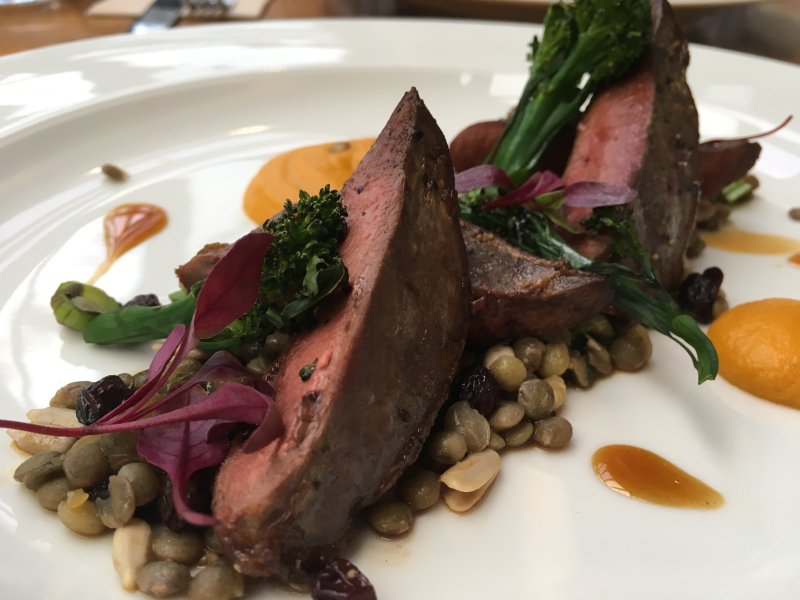 This wood pigeon, for example, came straight out of the woods.  "All of us on staff here have to go on a hunting trip with the owner eventually, its just part of working here to see where the food comes from."  Said our waitress. "He has to go out a lot – but its his hobby now as he no longer is the chef, he just keeps our kitchen supplied with the ingredients – and we use every part of the animals." 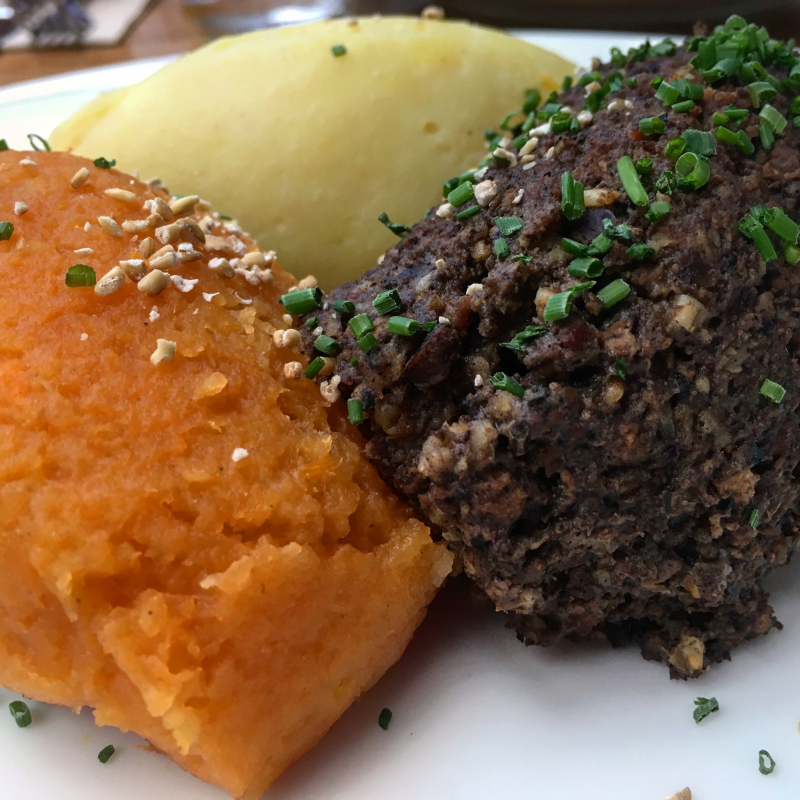 Case in point, their venison haggis. Haggis is traditionally made with the offal of lamb or mutton i.e. the lungs, the liver, the heart, the kidneys of sheep.  The lovely blob of a dish above called haggis with neeps and tatties (parsnips and potatoes) – uses a pirate's ransom of butter in the parnips and potatoes and is made the heart, liver, lungs and everything but the intestines of the deer. 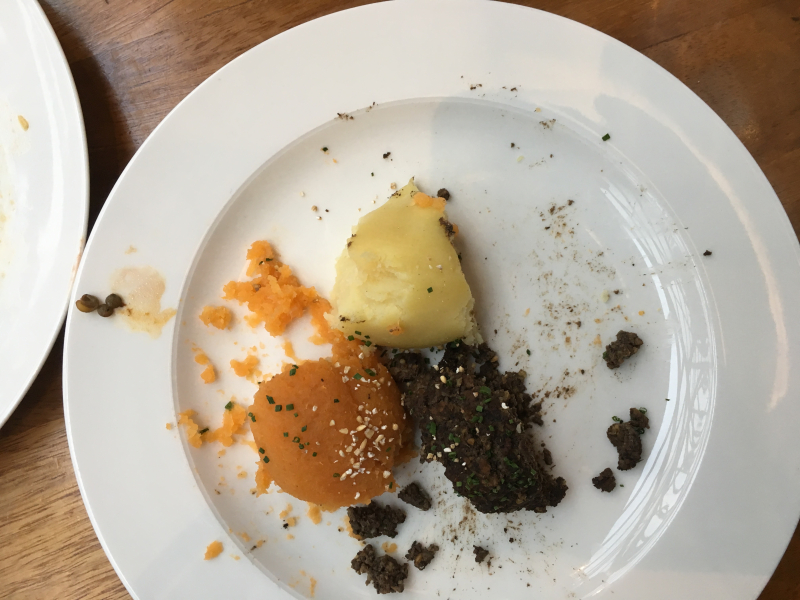 This being my first encounter with haggis I was surprised by its smooth silken texture (expecting it to be more like the large chunks you find in a steak tartare for example) and the spicy kick to the dish.  With every bite there was a peppery ping that danced on the tongue perfectly paired with the soft grounding umami of the rich flavored and finely ground organ meat, oatmeal, suet and other spices. It paired perfectly with this Bordeaux style wine from Lebanon we tried at the glowing recommendation of the staff. 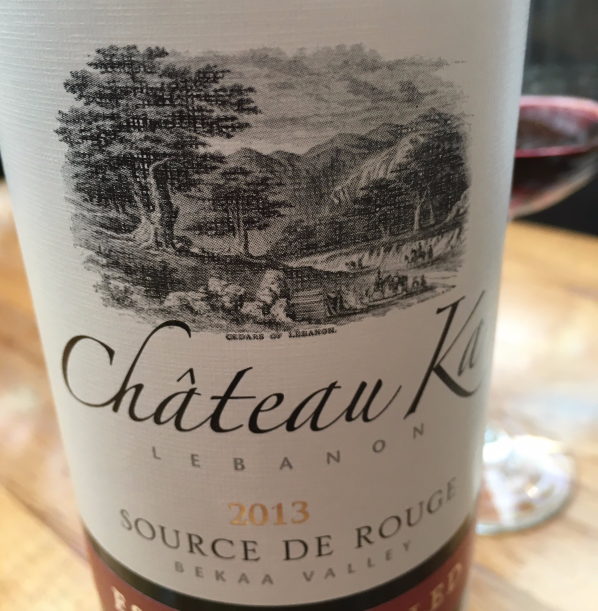 We finished our wonderful meal of local Scottish ingredients, and the wine, with a cheese plate featuring Quicke's cheddar. 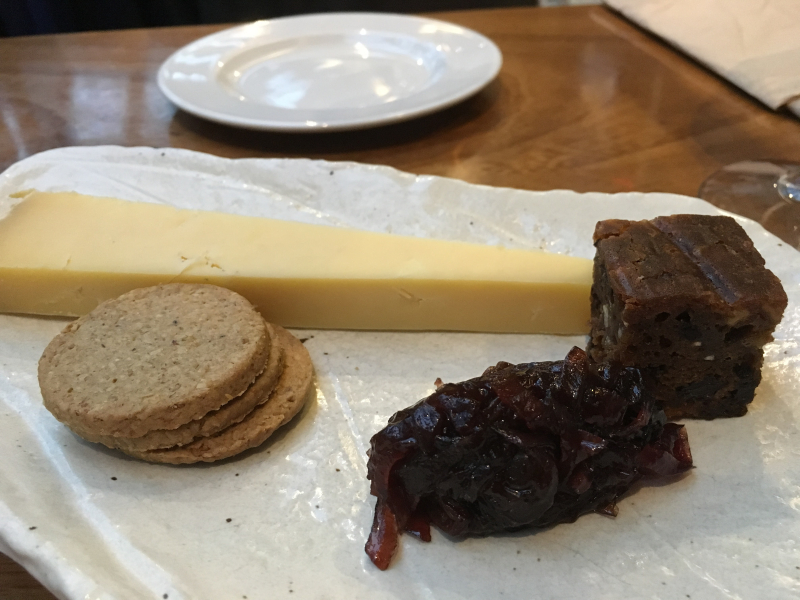 It was a tasty dessert course with onion jam and oatmeal crackers.  It paired phenomenal with the phone call we got from the airport lost luggage services informing us that our bags had not only been located, but they were waiting for us at the airport. We could pick them up the next morning on our way to Islay.  I called back and asked if there was any way for us to get them this evening. They said we had plenty of time to come and get them ourselves.  So we packaged up the last of our neeps and tatties and haggis for breakfast and called an Uber to take us to the airport to retrieve our luggage. 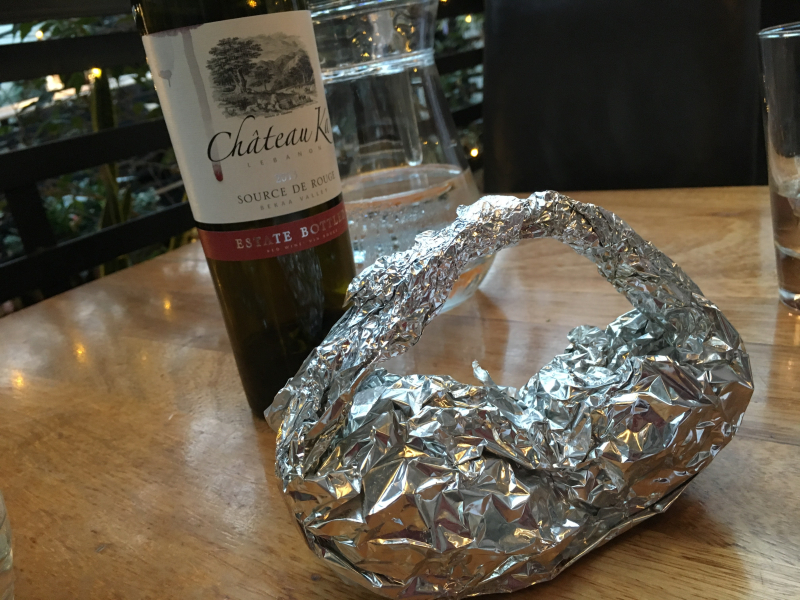 I got to go to bed full of haggis, showered, happy, and in my jammies.  It was a good day.