Early on Tuesday morning we got up and prepped our luggage for a tiny little airplane flight from Islay to Oban. This was the trip that required only 10 kg of luggage and had shaped our packing choices for the whole trip. The only problem was that I now had glassware from at least 6 distilleries so I was just over the weight limit. 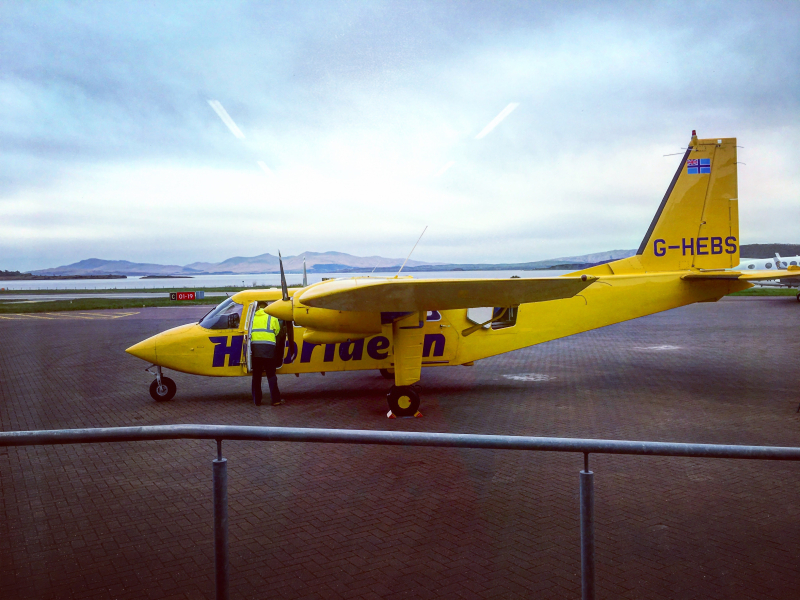 It was also our last moments in Islay, beautiful island of nice people happy to see us spending our money hither and tither, drinking their whisky, eating at their restaurants. Only the unknown mainland lay ahead for us now via a wee little airplane crossing. Hebridean Air flies two times a week from Islay to Oban and back again. It also goes to Glasgow, it is pretty inexpensive and handy for those living on an island, as its an option if they need to go places like the hospital and such. That is, if it can fly on that day, weather being a major consideration in a small airplane.  As we waited for the flight in the tiny hut at the end of the tiny runway it occurred to me that was a possibility that it would not show up because of weather or something. Then a tall old fellow wearing a fisherman's cap walked up and said "I've been waitin' for this flight to happen every Tuesday for a month." This statement made me slightly more concerned until we heard the sound of the propellers coming in. Meanwhile, all concerns about the 10 kg of luggage also melted away when the pilot got out and said "You going to Oban?" and we said "Yes." and they said "OK then, let me take your bag, please keep all cell phones and other fire hazards with you." No one checked our identity, weighed our luggage, or was even concerned about anything.

Our new friend in the fisherman's cap did not stop talking the whole trip. He had the amazing talent to yell over the sound of the airplane engines and was a font of knowledge about the islands we were flying over with countless stories to tell. We couldn't have requested or received a better airplane flight tour guide. The flight was beautiful – I wish I could have had my phone on to take pictures – there is nothing like seeing the bays and inlets and islands from above. 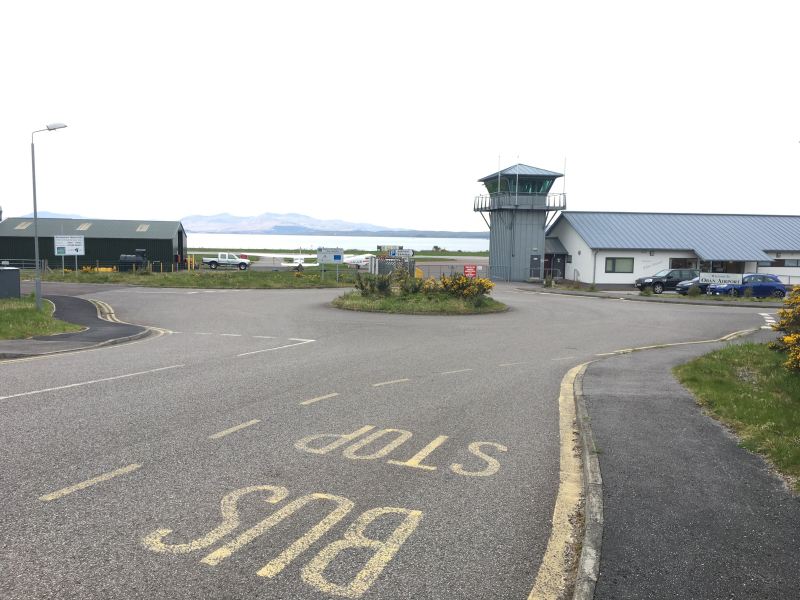 Our little airplane landed at Oban airport about 30 minutes later and we found ourselves quite a ways outside of town (unlike the map I had studied earlier). No worries though, there was a city bus that picked everyone up and brought them into town for just a couple of pounds. I took a moment to study the yellow flowers, called Gorss, that are prevalent all around Scotland. We soon found ourselves walking along the Oban Bay toward our hotel to drop off our luggage – as it was a few hours until check-in and we had lunch and a distillery tour soon in our future. 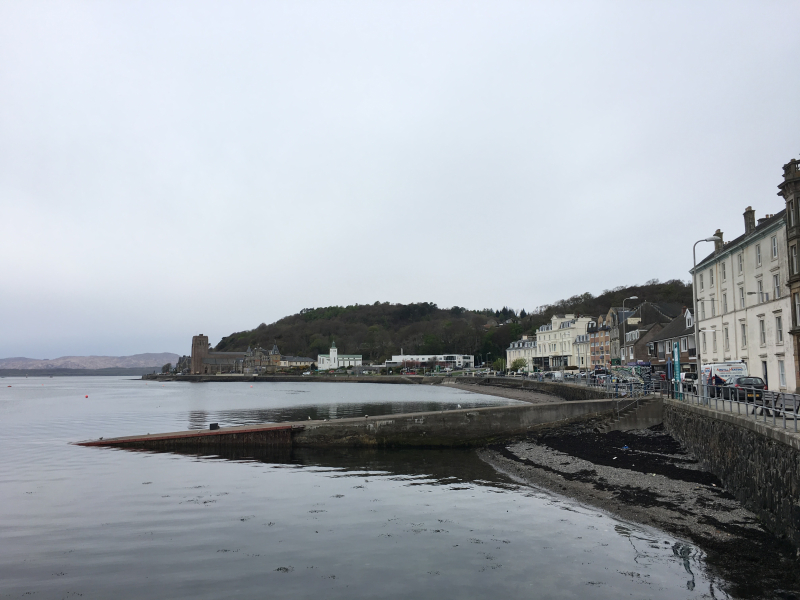 Oban is the seafood capital of Scotland. At least according to everyone in Scotland. Per our distillery tour guide "There was nothing here but a fishing village and the distillery. The town grew up around the distillery." Today it appears to be a nice center of fishing commerce and tourism focused around whisky and the sea. 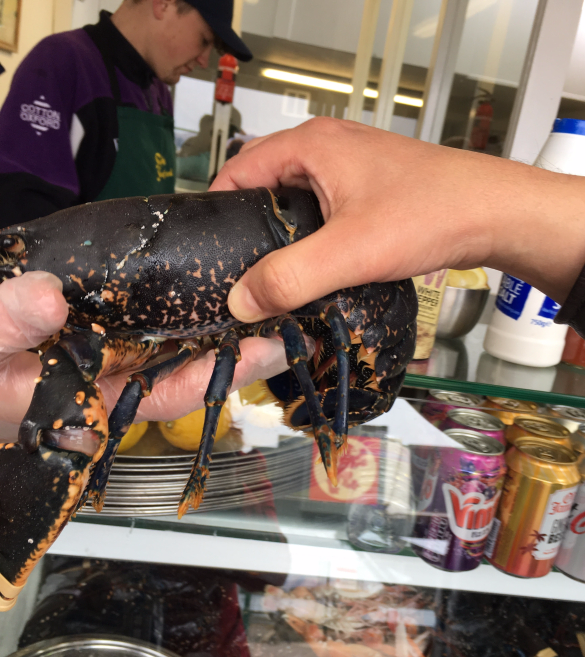 Based on what you can order at the Seafood Hut straight off the boat, with its wonderous view of the ferry terminal, I cannot doubt that it is a seafood capital of somewhere – I have never seen so many options of fresh seafood to eat in one tiny spot. 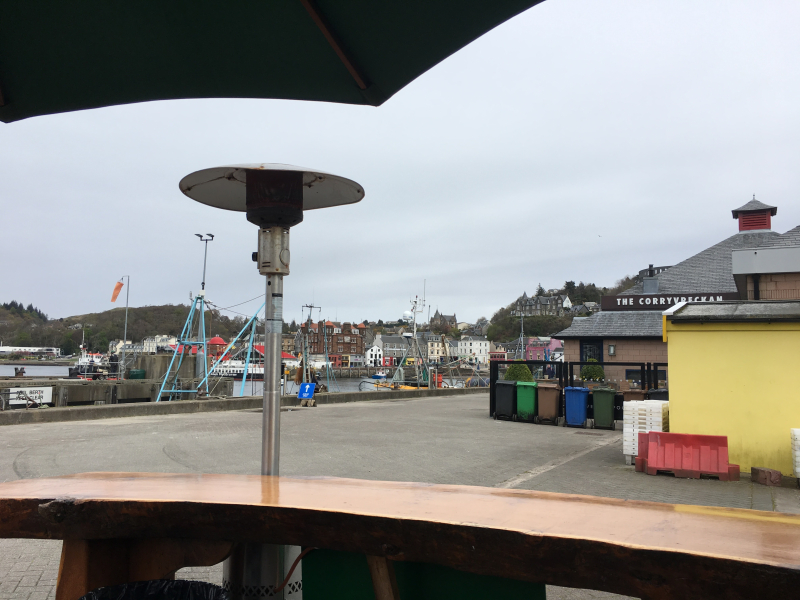 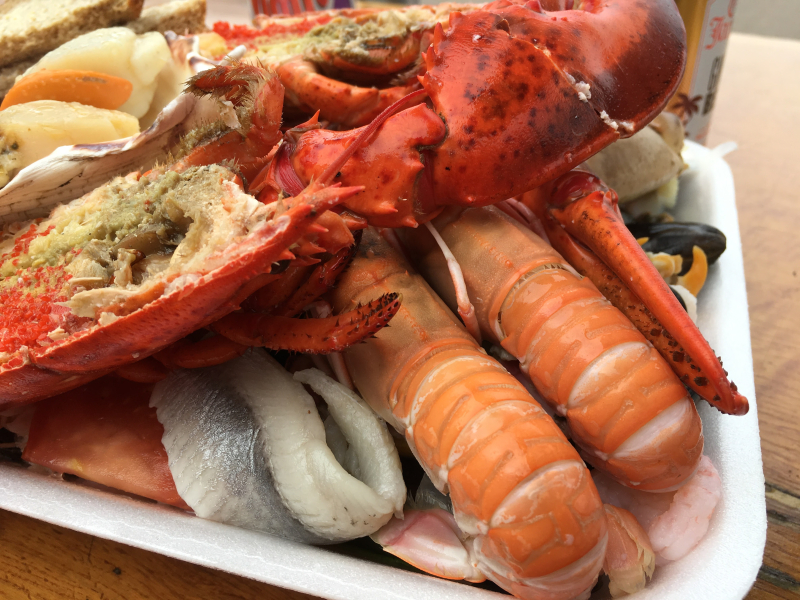 Our grand seafood platter was a grand journey through lobster, langoustine, stone crab, shrimp, crawfish, mussels, scallops, and salmon – a little bit of almost everything they sold. Everything still tasted of the water and was very wet and messy. We watched what the locals did and just dived in leaving our shells and such all over the table until we ate our through the pile of sea creatures. 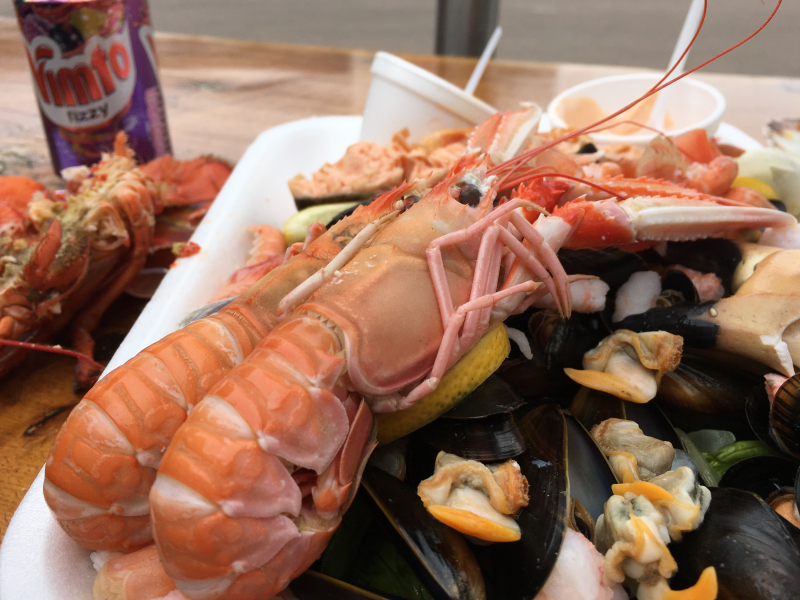 Eating outside in the wind with wet hands made for cold tourists so we went and had a sit down with some coffee, where we were accosted by a nice old man who apparently doesn't get out much and needed to talk to someone, anyone, who would listen. I managed to escape but John just sat there smiling and nodding at the fellow, and the stories just kept going. The best line of the whole encounter was "You are going to Wick, its wild up there!" As the fellow definitely had a strong belief that Northern Scotland was still a barren land inhabited by unruly Highlanders drinking and yelling in Gaelic. 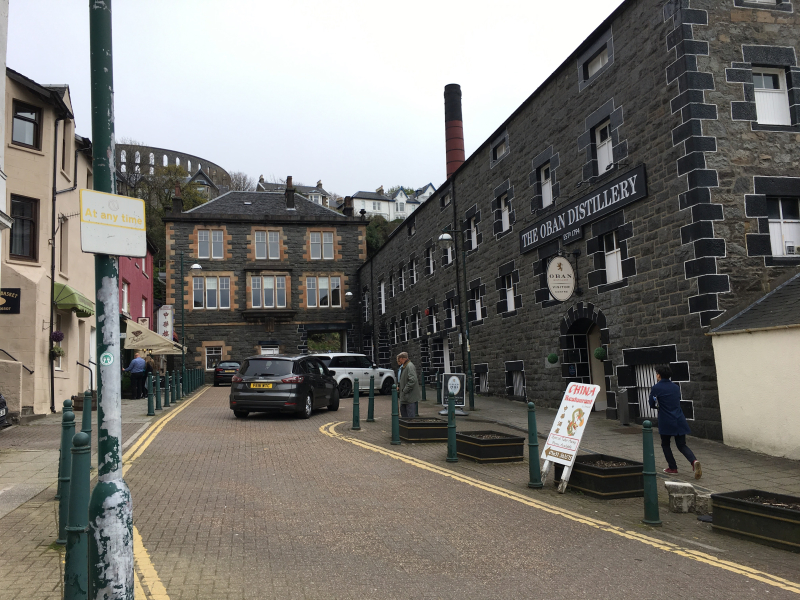 After some more wandering in downtown Oban it was time for our distillery tour. Oban is another distillery that doesn't let you take pictures inside its facility, and as it is an urban distillery, so there just isn't much to take pictures of on the outside. The whisky however, as always was wonderful.  We were able to taste a special release from a barrel and a 12 year on the tour and sadly nothing else because the tasting bar closed just after our tour began. 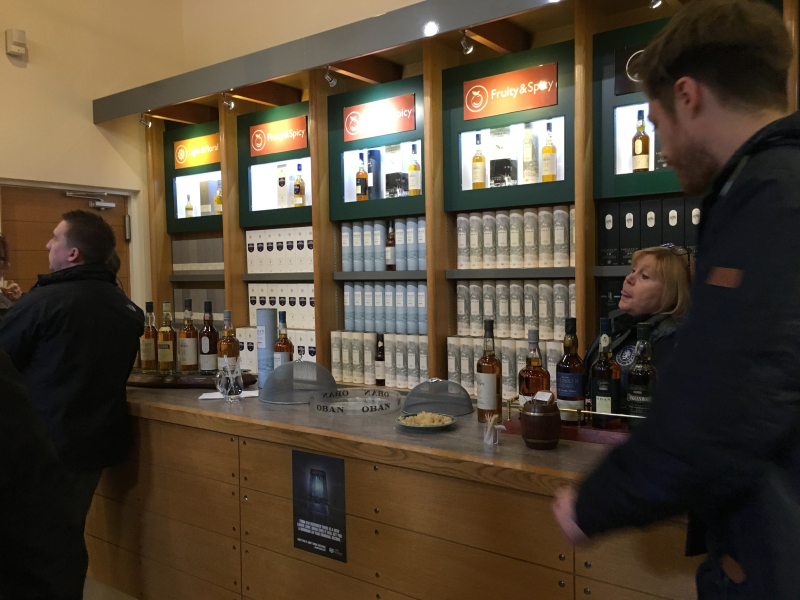 Oban has a couple variations from the distilleries in Islay however – first it is very small, with very little space for its equipment which includes only 2 stills; second -it was the tidiest distillery I've seen with lots of industrial signage and visibility boards to track this point of production or that; and third they did not agitate their barley in the mash tank and they ferment longer in the wash back than anyone else. Despite size they manage to produce 1.1 million litres of whisky per year in their tiny facility. Because we could taste no more whisky at the distillery we crossed the street and went to the Oban Inn, the oldest bar in all of Oban for a couple of drams. It was crowded, there were no open tables, my feet hurt – so it was time to survey the room and make some friends. There were two older fellows sitting at a booth with two chairs so I asked them if we could join them and/or use the chairs. Soon we were chatting about everything shy of politics with Tom and Bill. 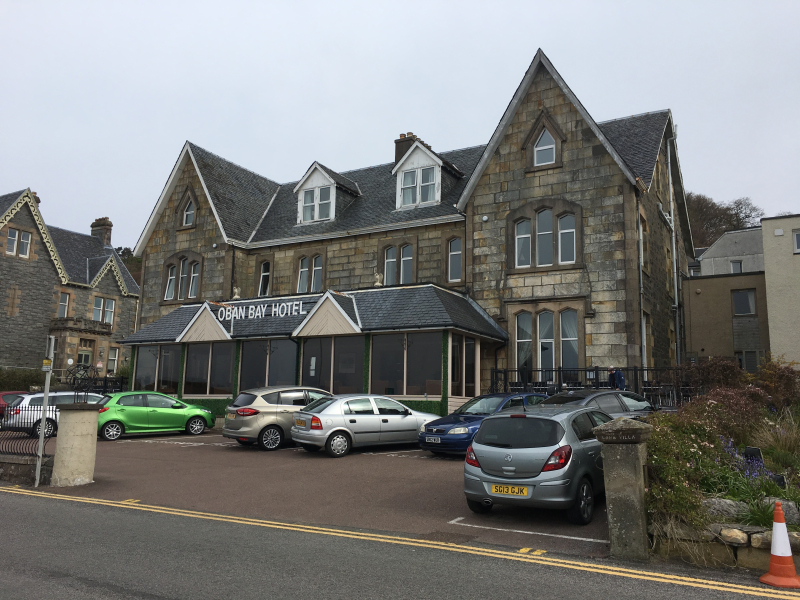 After a pint Tom and Bill were summoned by their wives but they promised to meet up with us later after dinner at our hotel. Meanwhile, we went to the Whisky Shop who promised duty paid shipping and made our whisky purchases for the trip to be sent back to the states then headed for dinner at Coast, a Michelin Guide recognized restaurant. 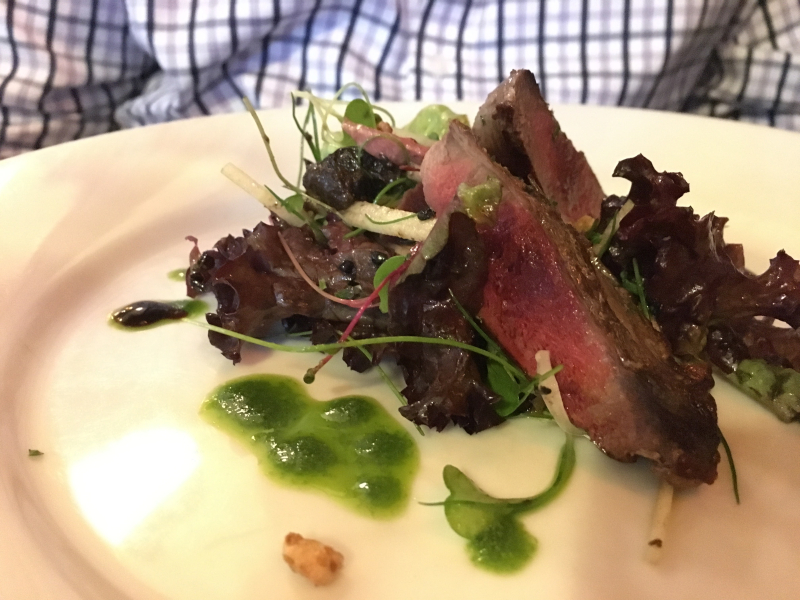 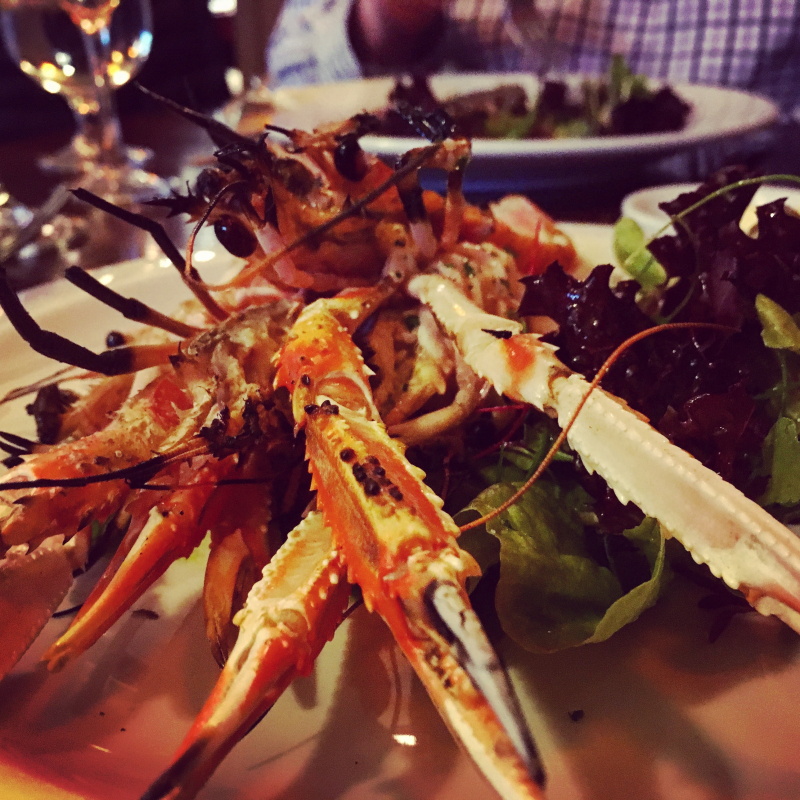 Oh langoustines, oh langoustines, how do I love you langoustines. The most simple preparation of just fresh tiny langoustine and the grill make for the sweetest, most amazingly pleasurable taste to ever traverse my tongue. It was Barry White singing a lullaby of flavor to sooth you into the land of taste bud bliss washed down with a lovely bubbly. 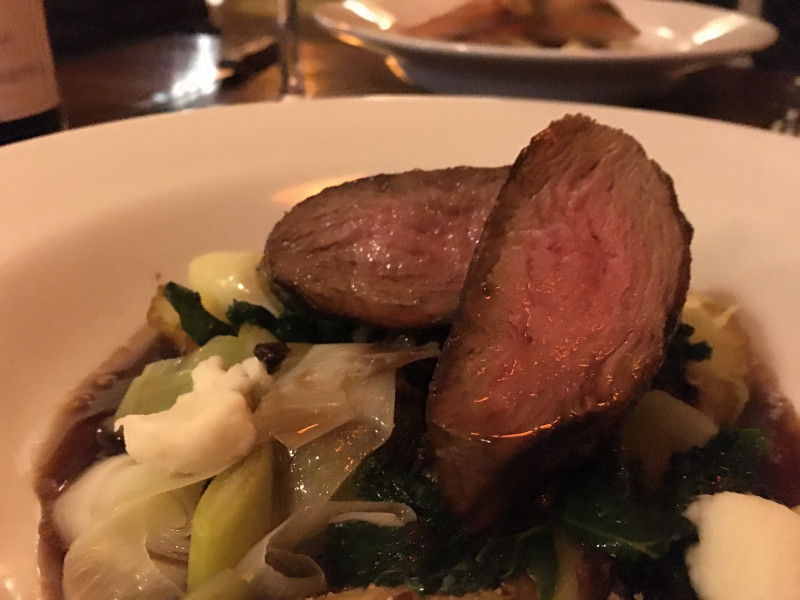 Then there was the venison – so ridiculously good that it brought back all my childhood memories of eating venison (as it was more plentiful than beef in our family because all the men hunted). I wanted to be able to eat every last morsel but alas I needed to share just a little of the goodness with my traveling companion. 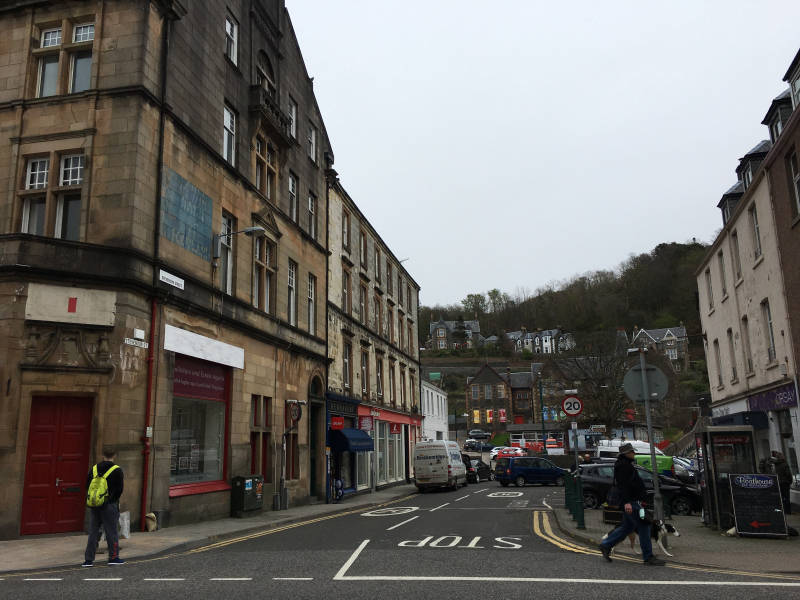 Dinner took quite some time and before we knew it we were late for our rendezvous with Tom and Bill and their wives. We walked at a brisk pace to the hotel to find them in the bar waiting for us and just as pleasant as ever. We shared drams and stories pretty late into the night about everything under the sun – even with a bus ride all the way to Wick looming very early in the morning.