I was finally able to sleep past 5 am on Sunday morning.  As a result, I did not get a jump on my blog and when I was actually trying to be awake I finally felt the effects of the last three days of constant travel.  I could have also been slightly hung over from the large amount of Scotch we drank the day previous – but I don't think it was that. 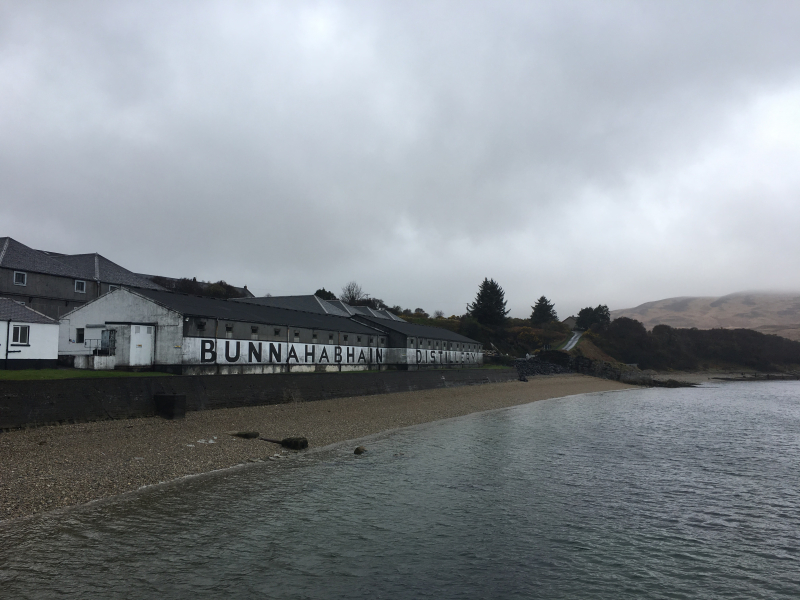 It couldn't be all the whisky drank the day previous because there was so much more whisky to be had – four more distilleries in Islay to be exact. Sunday was the day to go to the Northern most location of Bunnahabien and Caol Ila and Monday the Southern most Lagavulin and Ardbeg.  But lets take it one day at a time. Unlike Saturday – Sunday was grey and cloudy and wet.  Really not so pretty, but also not so windy and cold. It was just a perfect day to drink whisky. 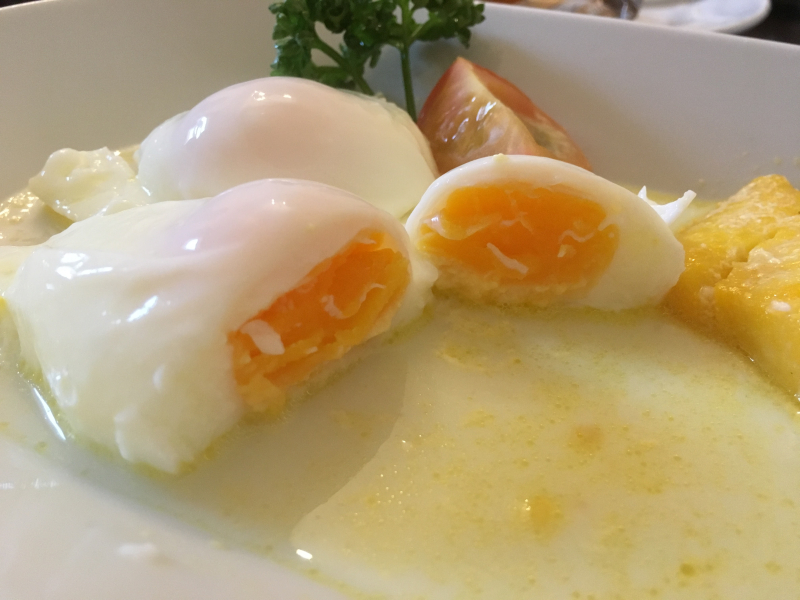 It was also the perfect day to start out with poached eggs so yellow they were orange, with a side of smoked haddock. Joy's breakfast came through again for a perfect start to a whisky filled day. I don't know what the chickens on Islay eat but their yokes are the most thoroughly colored yoke that I have ever seen – they truly are orange to look upon and amazing in flavor. 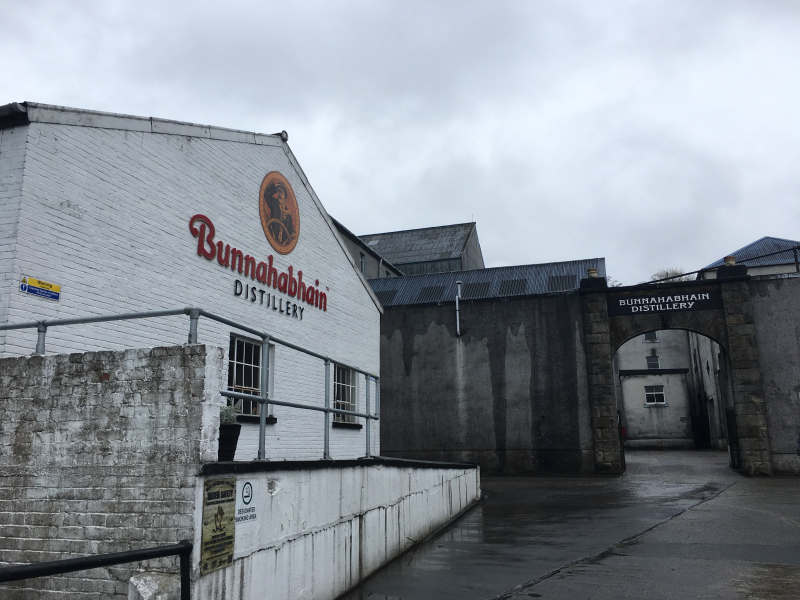 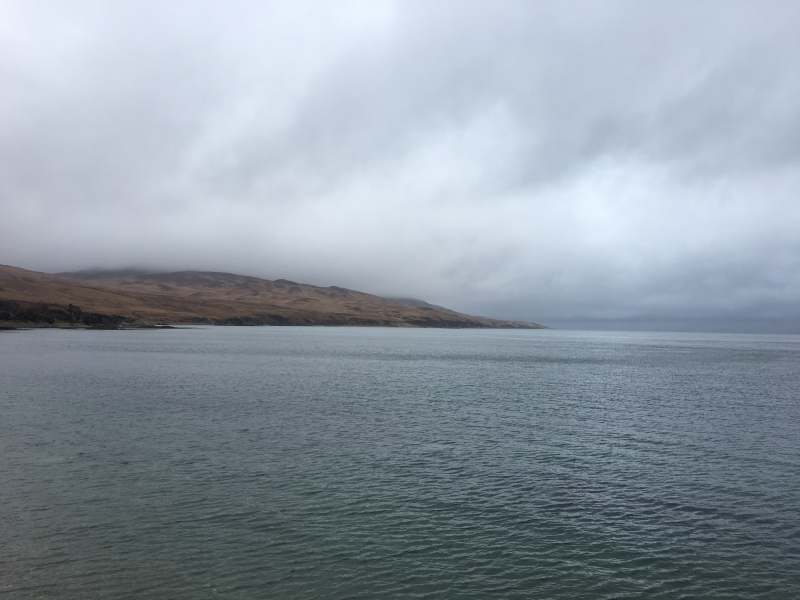 Bunnahabhain is situated near to the Northern most section of Islay.  It is definitely the most North and most remote by tiny road, beating even Kilchoman, just by lack of neighbors. Carol's taxi service brought us up there and we had no cell service so we were really playing on trust that she would be back to come get us. Inside the distillery, our tour guide Scott, started out the day right commenting on the grey wet weather.  He said "The rain is just future whisky." Which is a good way to look at it. Bunnahabhain was founded in the hey day of distillery foundings around 1881 (it was the hey day because disease had recently attacked the vineyards of France and had taken out wine, brandy and cognac in one fell swoop so there was opportunity for grain alcohols to get a food hold).  Its name means "mouth of the river" and it was brought on line in 1883 and has been running ever since at some form of capacity – however it stopped making peated whisky in the 1960's so it could devote its production to scotches for blends that were popular at the time like Cutty Shark. It re-started making peated whisky again in 2005 – because it is in fashion again and just makes good business sense. Bunnahabhain makes only 1.9 million litres of whisky per year and ages everything on site. They would produce more but they can only produce to the extent that they have a place to store the whisky on their land.  They are also horribly understaffed but that has to do with the politics of land ownership in Scotland and Islay, not that no one wants to work for them in this remote area of Scotland. 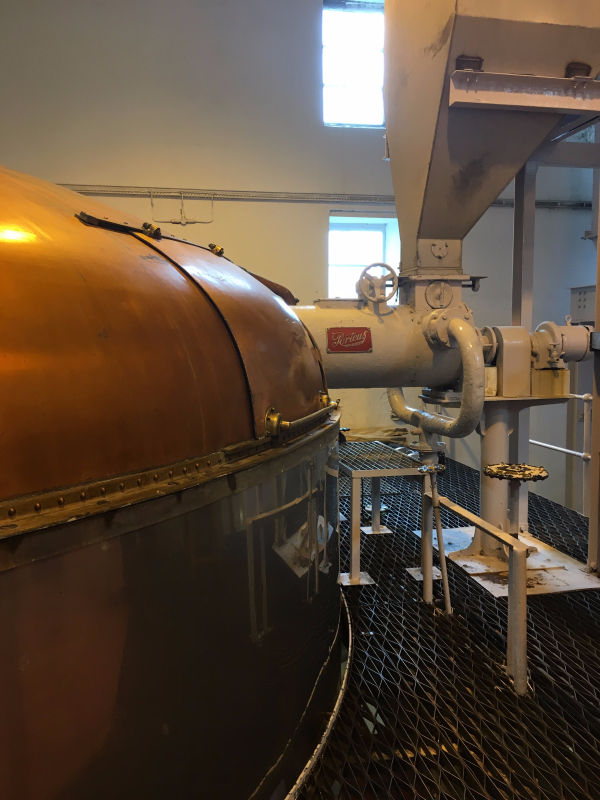 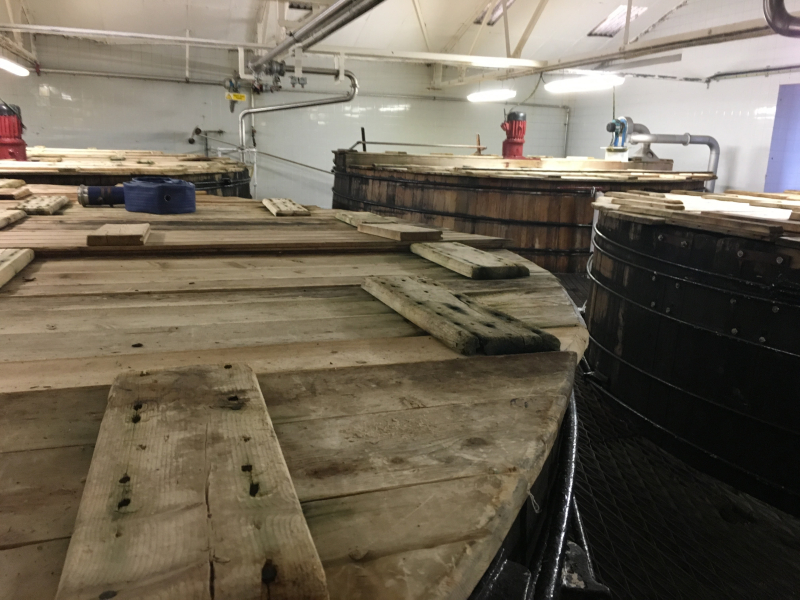 Scott and James, our guides and scotch tasting leaders were both extremely friendly and fun guys to chat with. It was Easter Sunday after all and here we were touring a distillery and drinking whisky. But we could tell when James pulled up in his car (we saw him as we were coming in) and whistled his way into work that he loves what he does – and he was not begrudgingly coming to work on a Sunday. Also after the multiple extra drams we got in our tasting it was very clear that the benefit of going to the remote distillery is that they want to keep you there, with any means necessary (i.e. more whisky). 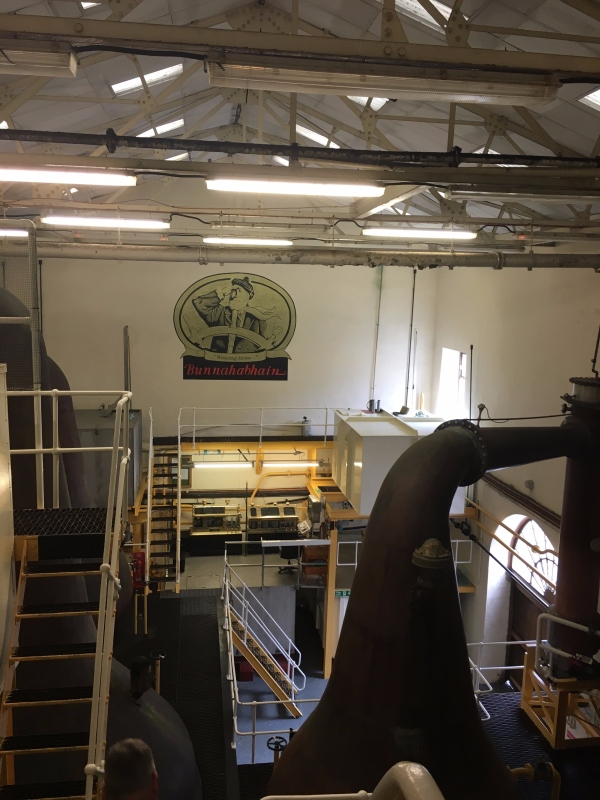 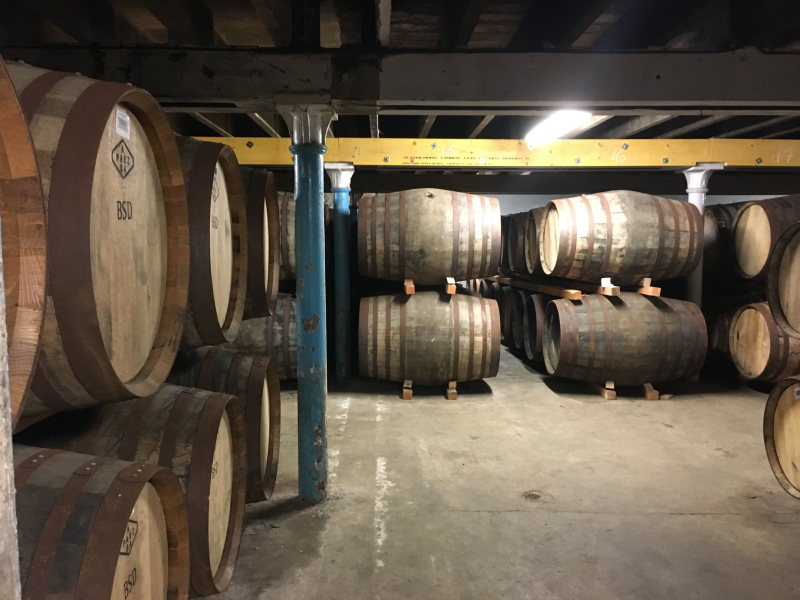 So we got to try all of the current stock of the distillery including a 25 year old sherry cask aged whisky that was amazing smooth fruity and joyful on the tongue. Time flew by and it was already time to head to Caol Ila the next door neighbor distillery, who is in some ways the opposite to Bunnahabhain. Caol Ila was pretty much rebuilt in 1972 – so to Bunnahabhain's old Caol Ila is shiny and new, (even though Caol Ila is technically older, its official birth date being 1846). 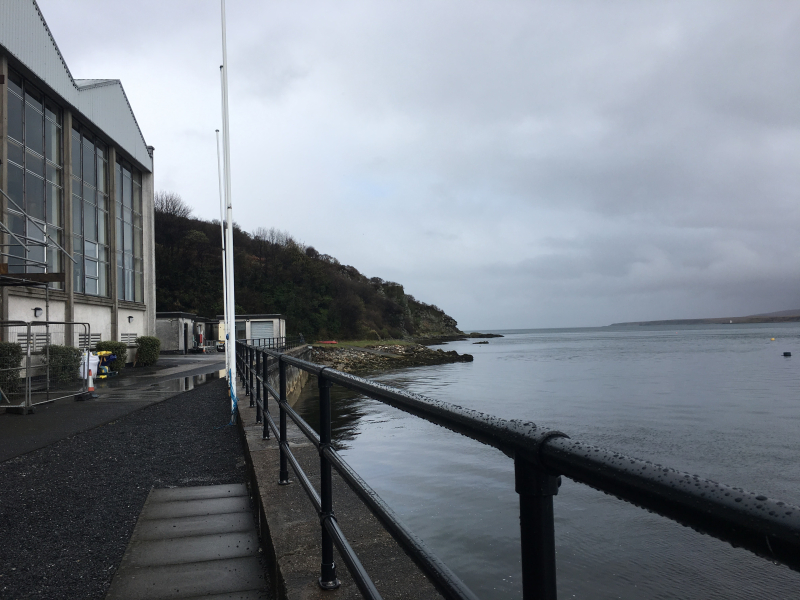 Caol Ila is also modernized to the extent that it completely believes in the power of computers. They run 24 hours a day Monday through Friday and produce 5.5 million litres of booze per year. 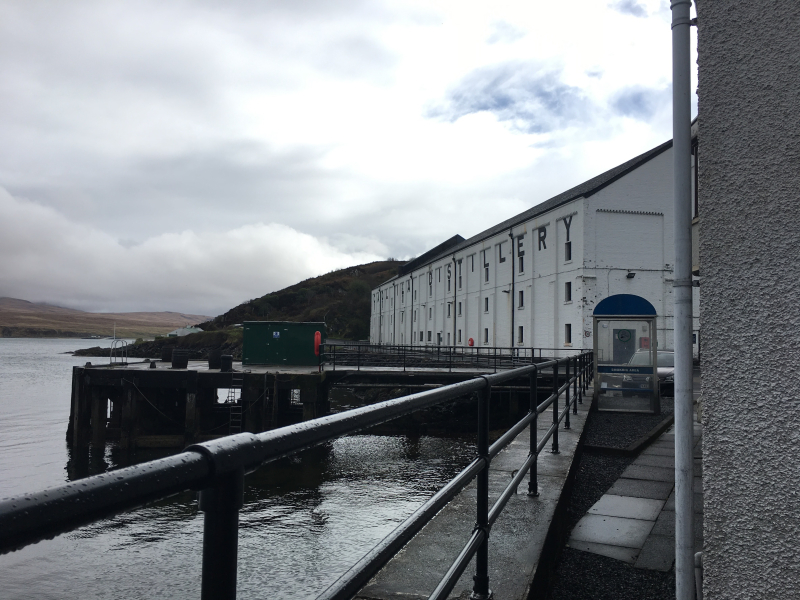 As the largest whisky producer on the island they go through 200 tons of barley per week and have 58 thousand litre mash tank to cook up giant batches of barley. They do not allow photos of anything on the inside however, so I can't show you their giant shiny 5 year old stainless steel tank, or wooden wash backs or six copper stills. But I can say that it felt like a factory down to the shiny new floors and the buttons, and computer screens. 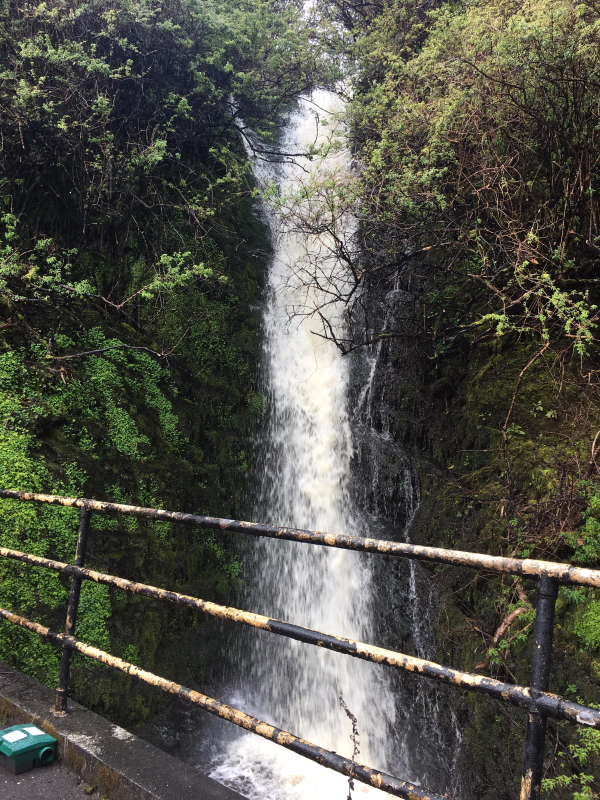 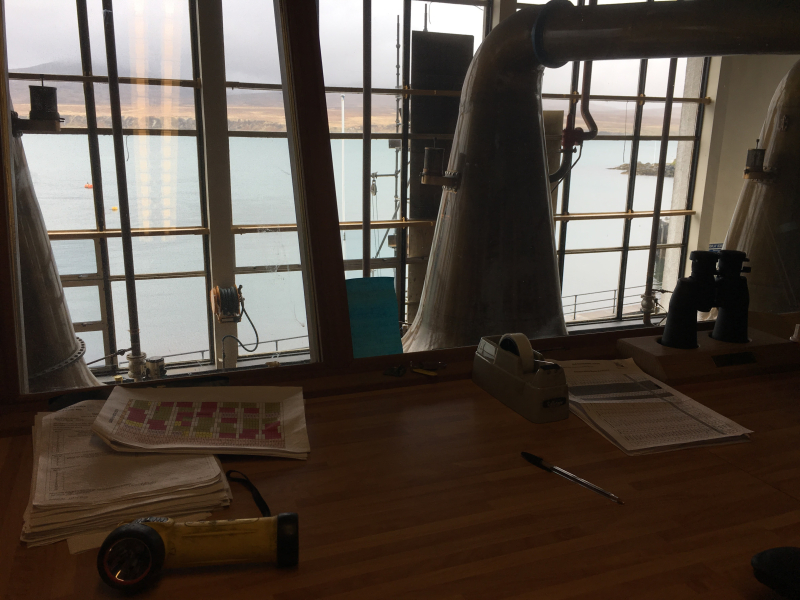 Our cask tasting experience wasn't factory driven by any means though, and we got to taste with an entire family who were on their second two week tour of Islay as a family who loved Scotch (can't say I wasn't jealous of their lovely group). We tasted two festival pours, an 11 year old and a 17 year old. I had never had Caol Ila whisky before so it was an interesting experience as I nothing to create a base line tasting with.  As a result everything was just new and different. 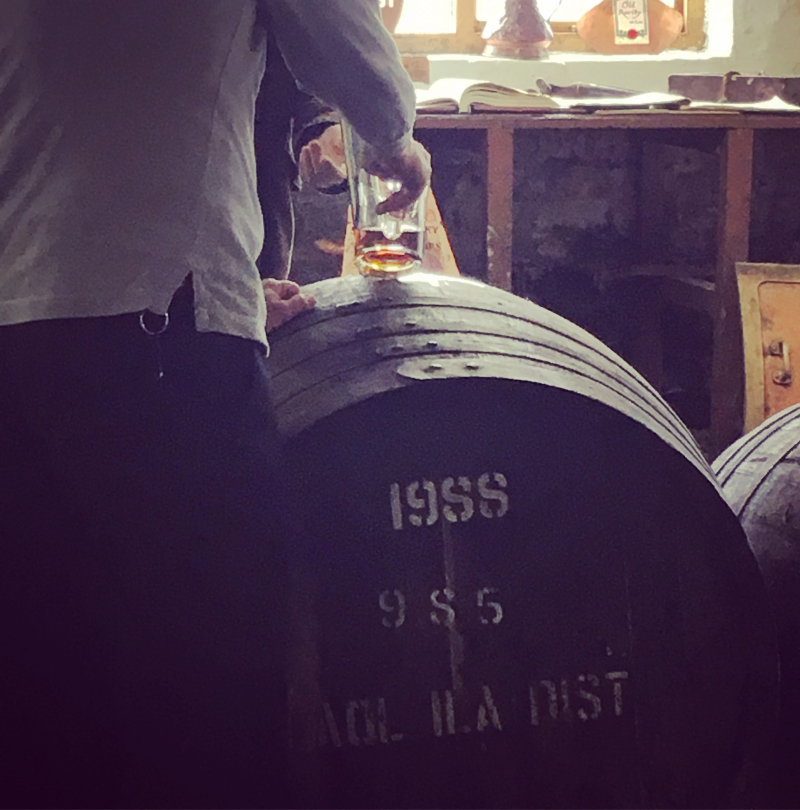 The 1988 sherry cask aged spirit however, was phenomenal – I could drink that regularly, but its not for sale and I'll never taste anything like it again. 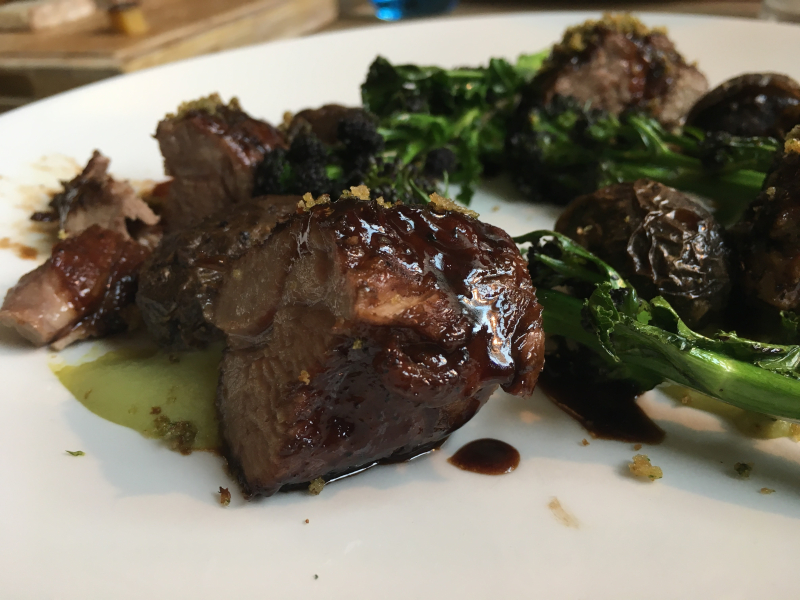 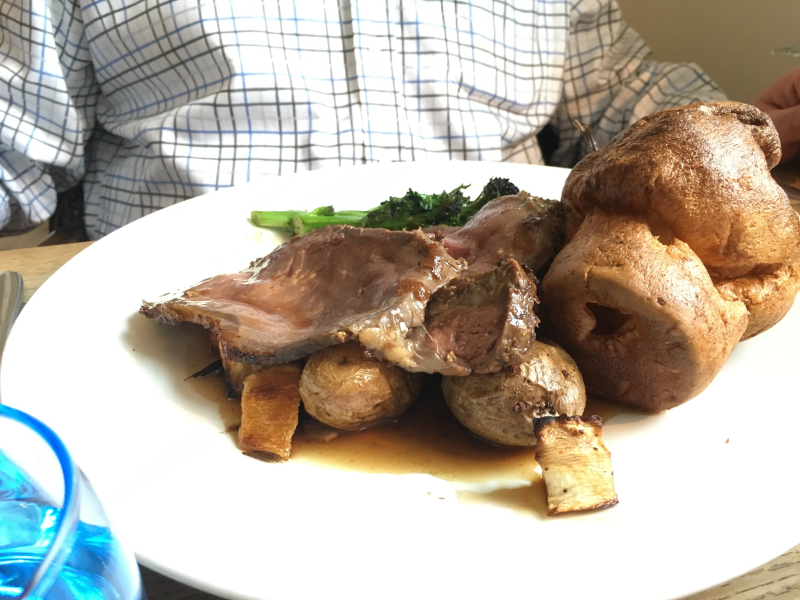 It was a good day in the misty rainy Islay world and we came back to Port Ellen in time for a fine Easter Sunday dinner at the Islay Hotel.  After many days of fish John and I both opted for a red meat alternative this fine Easter – beef and lamb.  I ordered the lamb neck and he the roast beef.  His beef was the most beefy beef either of us had ever tried – we surmised that it is because the cattle all eat the smoked barley graff left over from the first step of the whisky making process as well as all the Islay grasses that make the chicken eggs so orange. So why not become super beef. 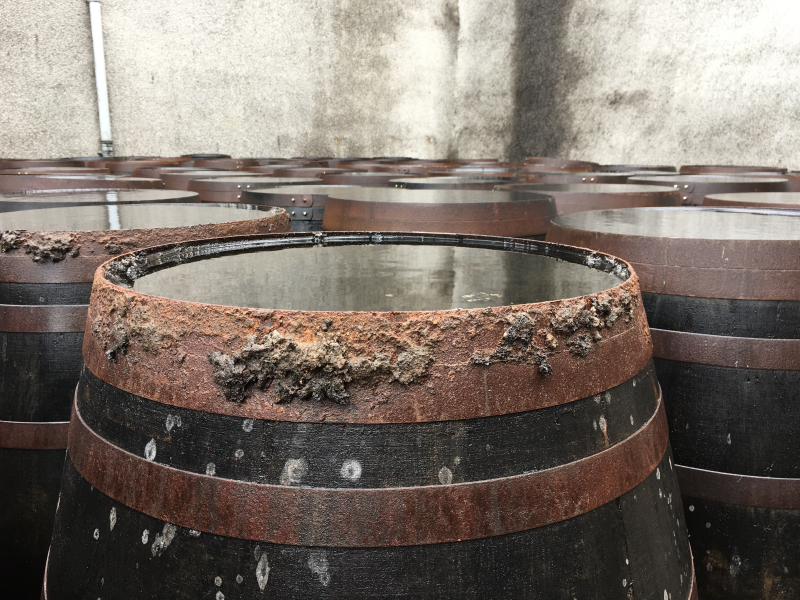 Either way after dinner I had visions of sugar plums dancing in my head from a little too much scotch and probably too little sleep. Full and happy it was time for bed to bring another day in this paradise in Islay. 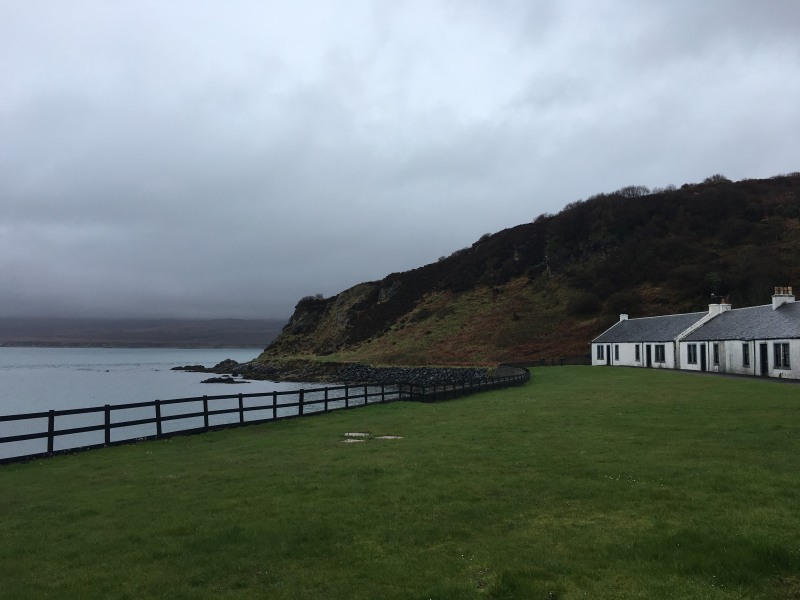