If all Mondays were like the glorious one I woke up to on Islay – I would never begrudge a Monday again. At 8 am the sunlight streamed in the windows as the birds sang traditional Scottish tunes in the bird bath outside our B&B. Port Ellen's bay was gleaming turquoise and deep blue and there no clouds on the horizon. It was going to be a great day. Our plan for the day included a tour and warehouse demonstration at Lagavulin, followed by lunch and a tour at Ardbeg. These distilleries are just a few miles down the mostly well maintained road from Port Ellen accompanied by a walking path. We were to get a ride from Carol in the morning to meet our 9:30 am tour start time and then walk the rest of the route if the weather held out. 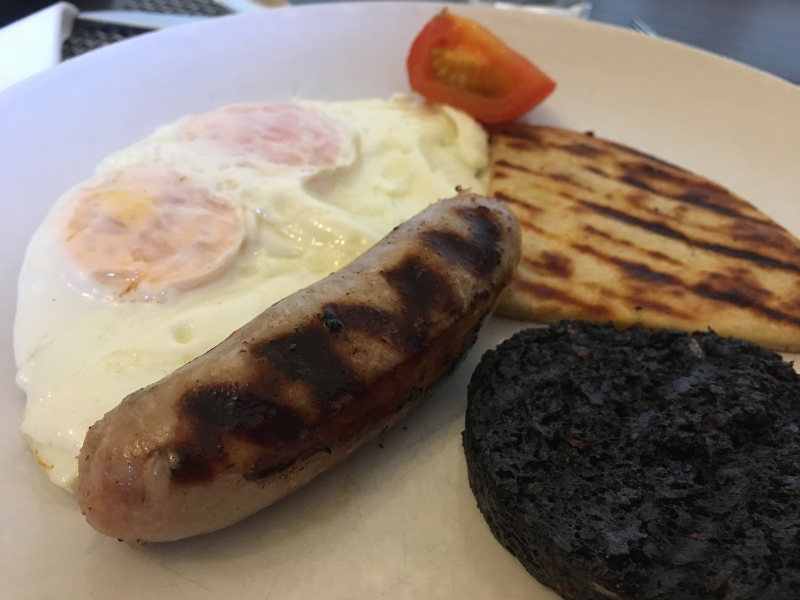 Because there was lunch in the locally famous Ardbeg Cafe, and Joy's breakfasts are so heavy I ordered the traditional breakfast this morning minus a few things so it would be "light" going. I was still defeated by its size – but was happy to pad my stomach for the morning whisky tasting experience in my near future. 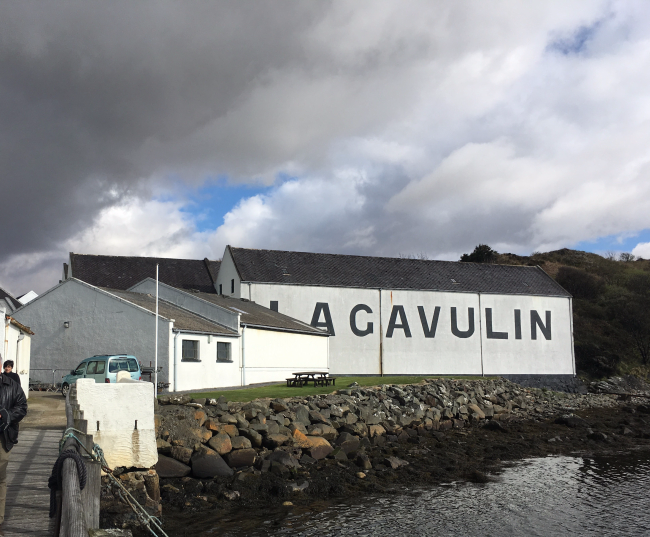 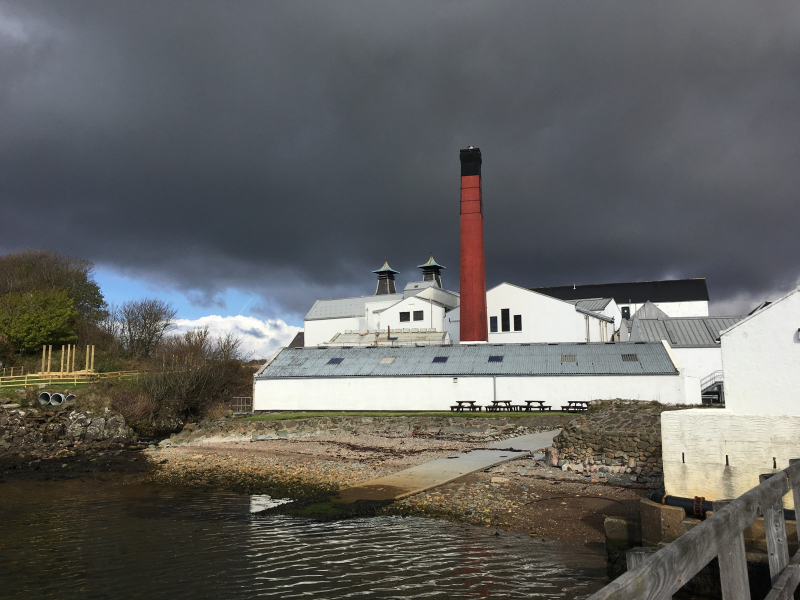 Lagavulin distillery whose name means "a mill in a hollow" has been making whisky in some shape or form since the mid-1700's on Islay. It was officially licensed and legally established in 1816. Its water comes from the Solam Lochs and its barley comes from Aberdeen, Scotland on the mainland. It no longer floor malts (but it once did – it stopped in 1973) instead its malting comes from the Port Ellen malting facility and is smoked with Islay peat up to 35 ppb. 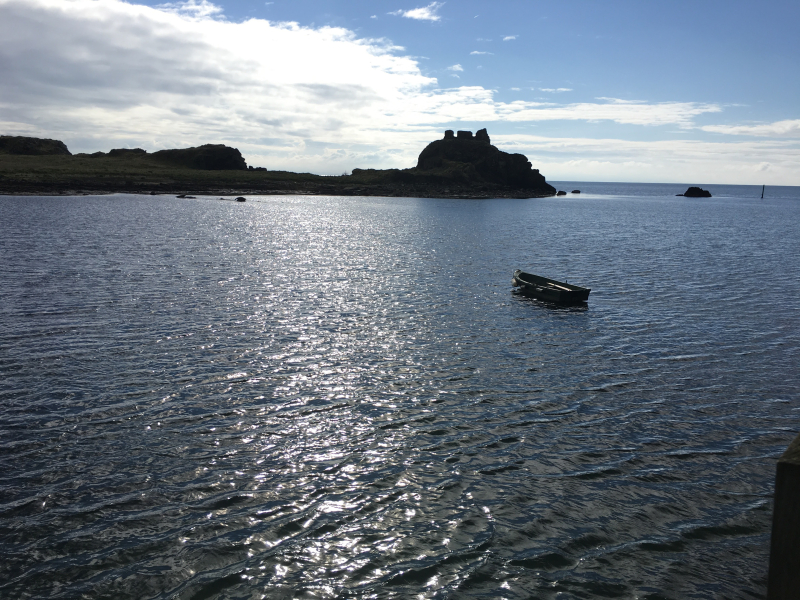 A sister distillery to Caol Ila is also quite automated and its equipment is quite modern looking although the surrounding buildings are not as much. Photos were not allowed inside the facility again so I don't have photos of their mill (it is a 1964 Porteus – just like Bunnahabhain), mash bin, wash tank, stills or spirit safe – but they looked very similar to all the others thus far pictured in past posts. However, in this tour we got to peek into all of the wash tank's as the yeast was actively brewing and taste the 8% alcohol "beer." As I looked into a particularly active wash bin the yeast shot out in a stream – our tour guide exclaimed (now covered in the beer mixture that shot out) "This one is spitting!" 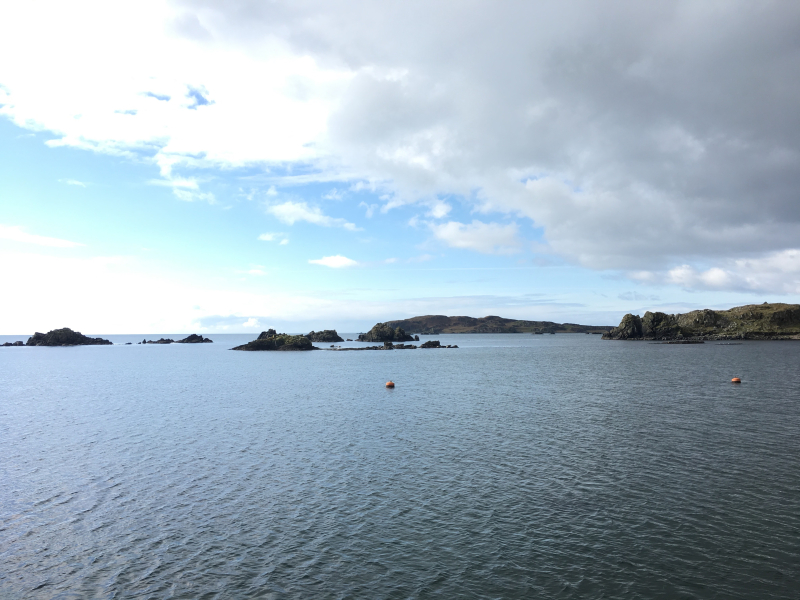 Unique-ish part about Lagavulin is that they produce 2.4 million litres per year using 7 men, 2 per shift going 24 hours per day, 7 days per week for 50 weeks out of the year. That is 320 casks per week out of 28 batches of barley. It is very industrial even if it appears more traditional on the outside. As it was a Monday and not a holiday and apparently always in production the still room was a blazing hot furnace of humidity. All the other tours talked about this heat, but I finally got to feel it – not ideal with a full jacket and sweater on. 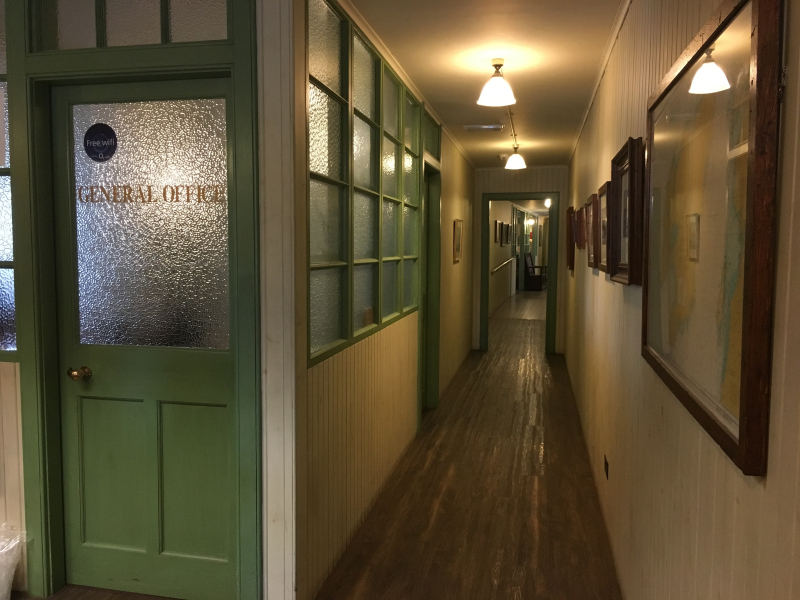 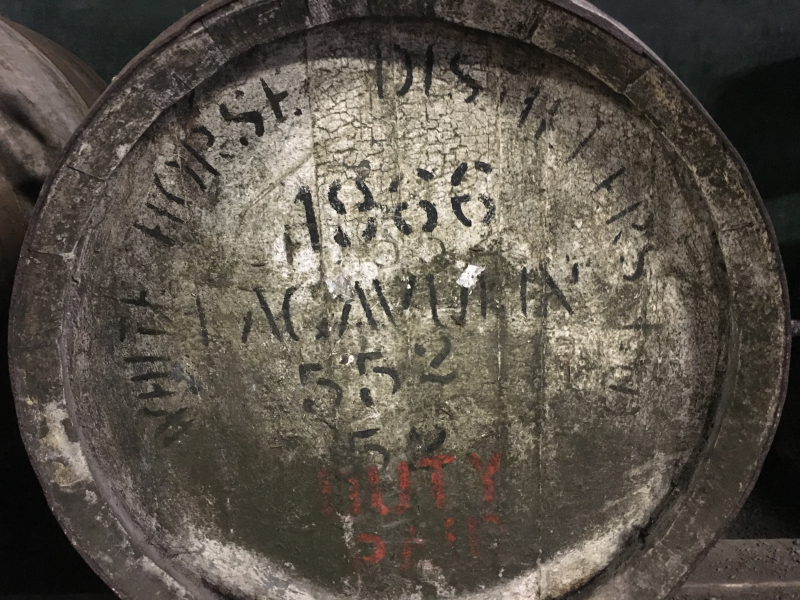 Because Lagavulin produces so much they store it on site, in Port Ellen, and Caol Ila for something 16 thousand barrels of stock. The oldest barrel in stock at Lagavulin is 51 years old – and in the warehouse demonstration we got to try it. 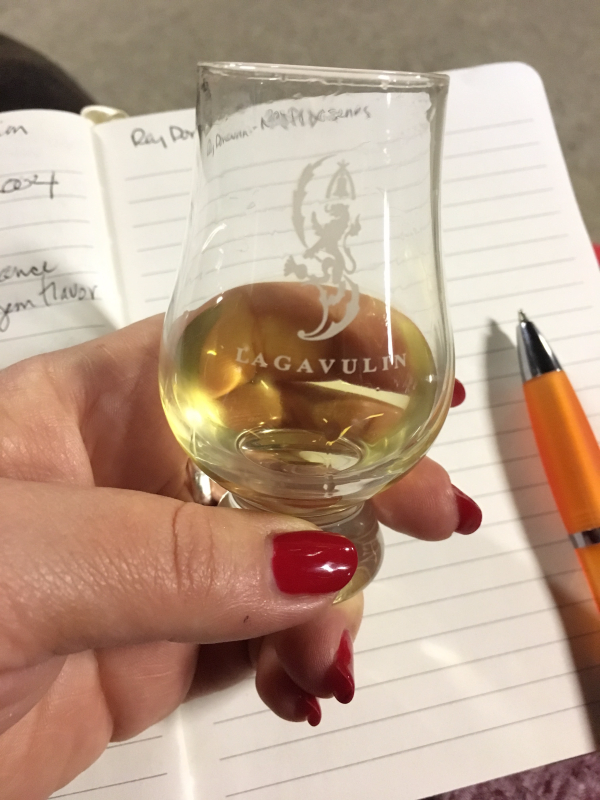 The barrel came back to Lagavulin's ownership from an estate of a lady who recently passed because the family couldn't pay the excise tax to take it from the distillery. It made more sense to sell it back.  A bottle sells for a lot of pounds – so I was quite happy we got to take a little taste. 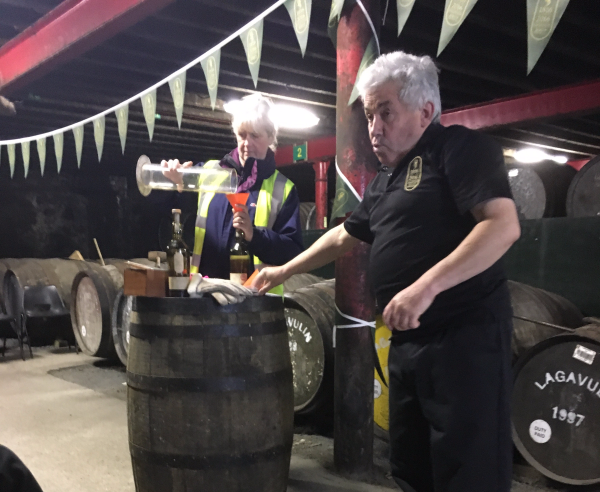 Ian, our guide in the warehouse, and Lagavulin master blender, was quite the character.  He looked like he was part of the island itself, and apparently stars in a couple episodes of Parks & Recreation when one of the show's characters finds some money and purchases Lagavulin. He told a lot of jokes and held a lot of knowledge – but he wants to retire in a few years and raise cows with his remain brother and son. 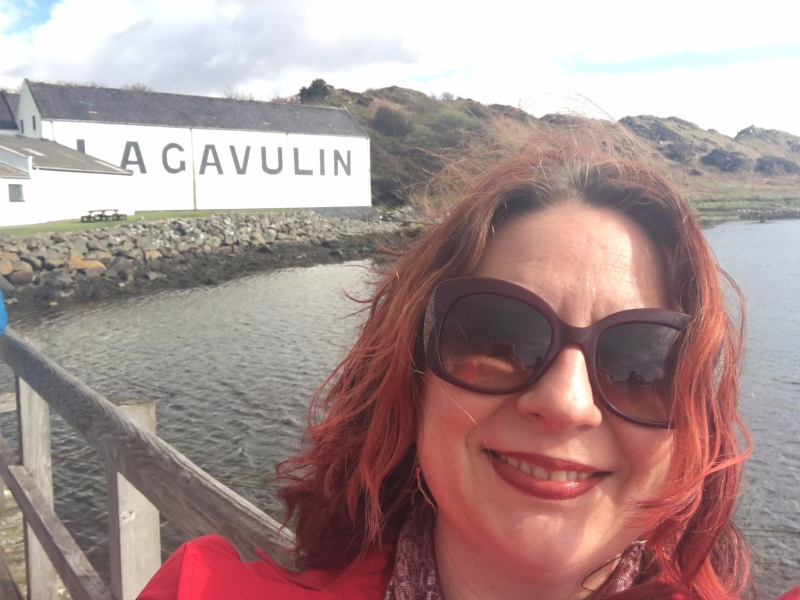 My favorites of this tasting were the 24 year first fill sherry cask aged – which was mild with a light fruit, and the 35 year which was aged in a bourbon barrel – the age of it smoothed it out tremendously giving it a lovely light smoke and light peat. The 51 year old had spent its life in a Johnny Walker cask, and to me I could smell the Johnny on its nose – but everything else was just amazingly smooth and dry. 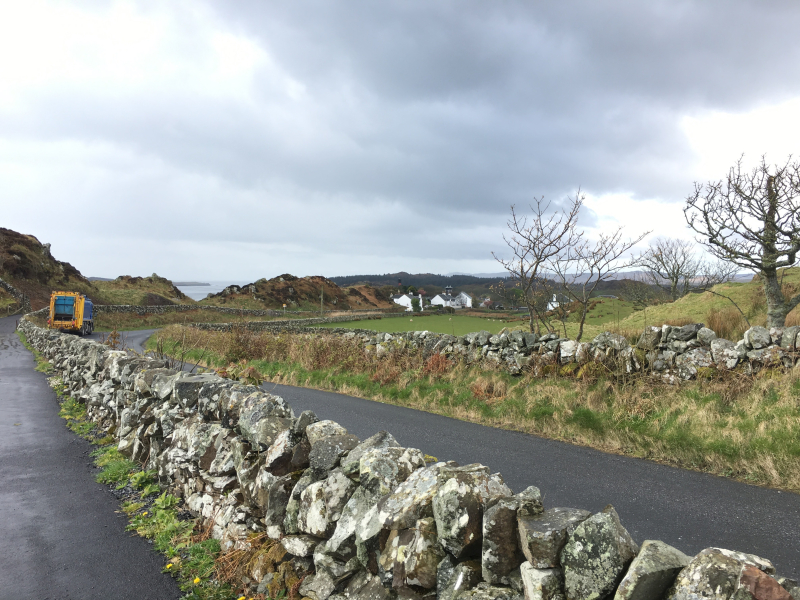 After our tasting of 6 full drams of scotch it was time for a walk to Ardbeg for lunch.  Ardbeg is less than a mile down the road from Lagavulin – and this day it was a mile filled with spring time splendor, otherwise known as new born lambs. 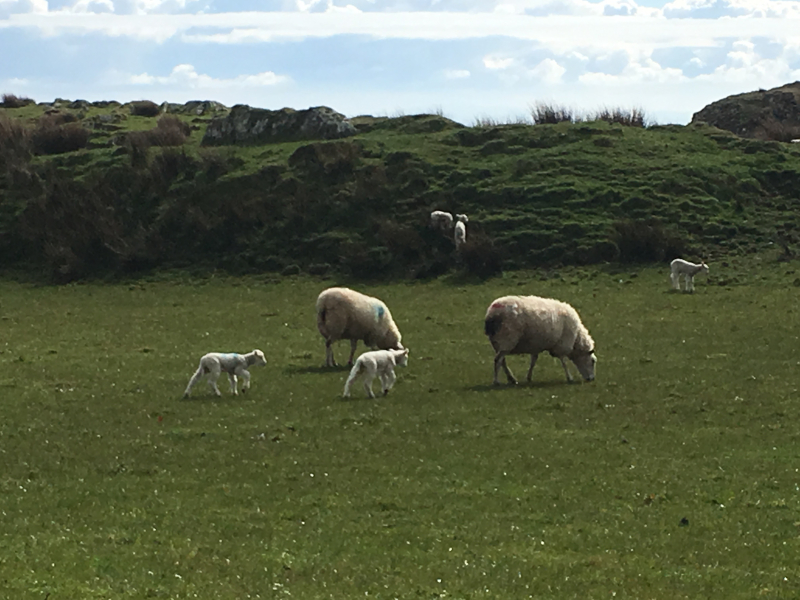 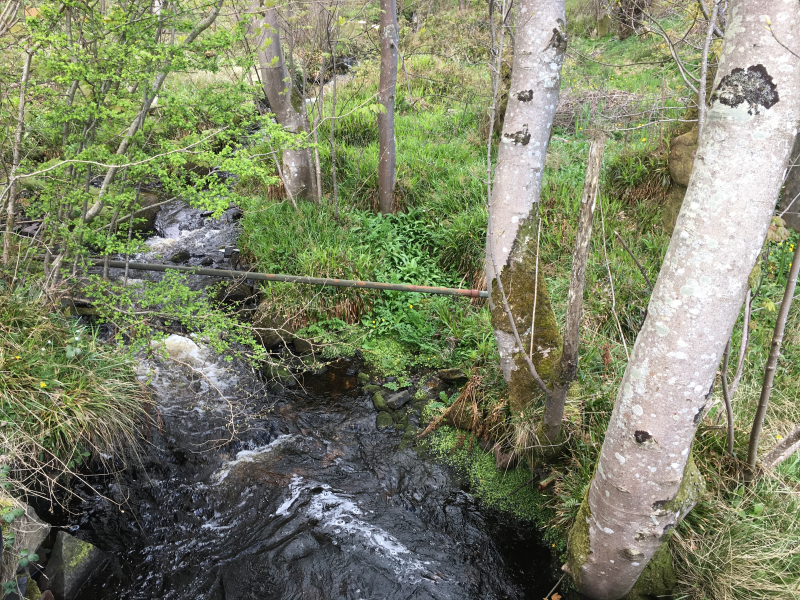 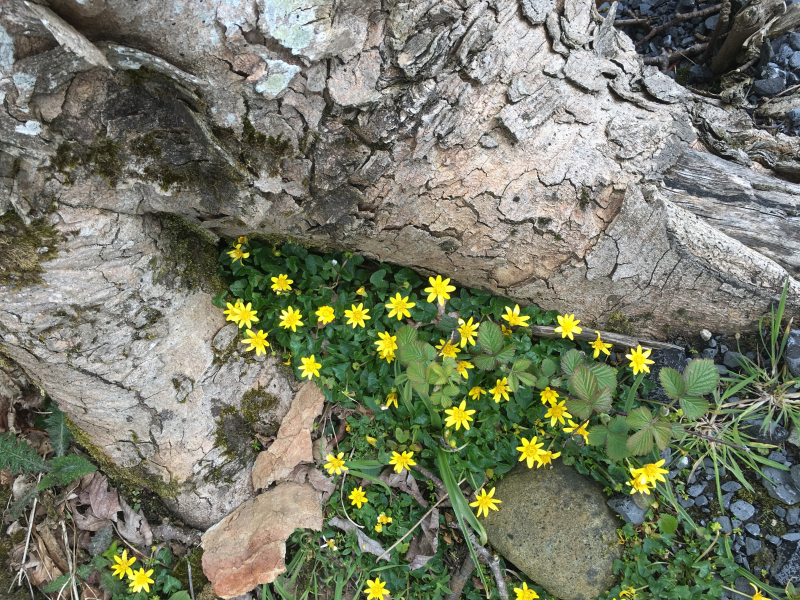 And streams and flowers and sunshine – in short it was a very pretty day and there was lots of pretty stuff all around and you couldn't help but feel happy. And we were happy – we were in a beautiful place on vacation taking in all of the wonders of the whisky world – and we were about to have lunch at the best cafe on the island, the Ardbeg Cafe. 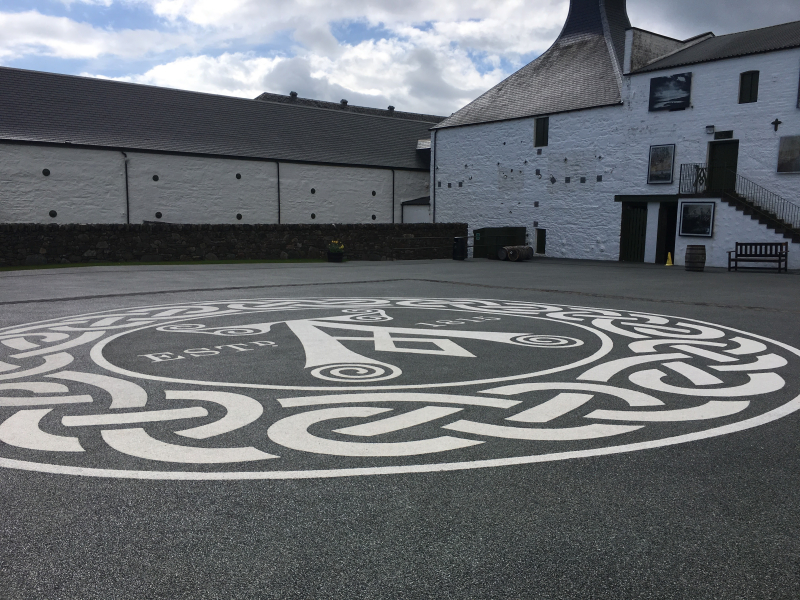 It was our last day on the island and everywhere we had went on Islay people said "oh the food at the cafe at Ardbeg is really good," or "Ardbeg is my favorite place to eat on Islay." In other words, it had swimming recommendations – we had to try it. When we walked in we were greeted with live music being played by two men in kilts. 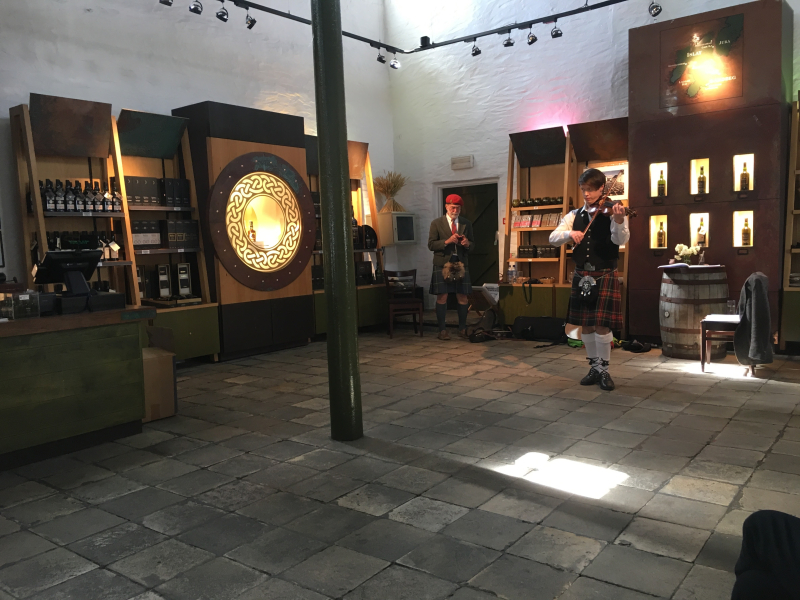 These were all good signs – including the starting of the traditional song that is used as the theme song of the Outlander Saga – I'm not sure if it was obvious but I stopped in my tracks and said "oh its this song!" And our host replied – "You can stand here and listen if you like before we seat you." Sheepishly I said it was unnecessary – as we were being seated in the dining area anyway. 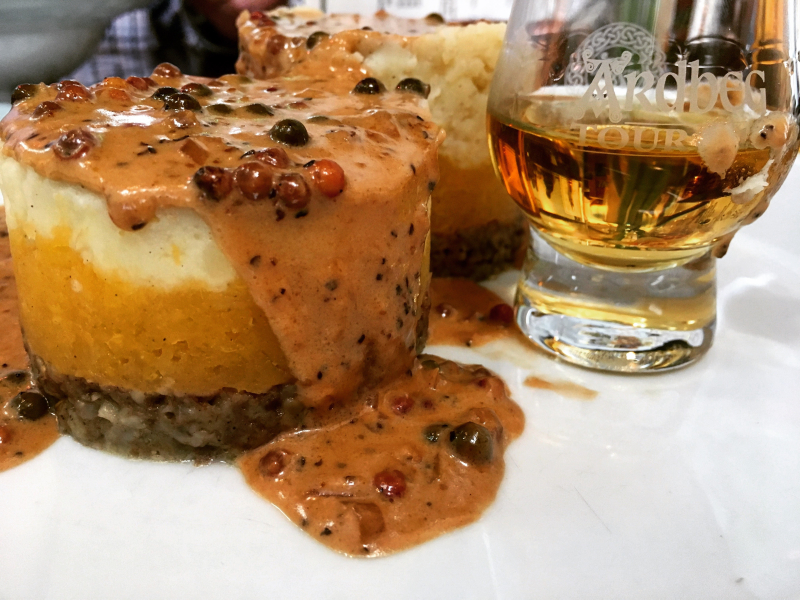 The food at the cafe was phenomenal. I ordered a version of haggis that turned out to be quite the beautiful construction on the plate. There were also the wonderful soups – haddock chowder and celeriac. Everything was joyfully delicious. 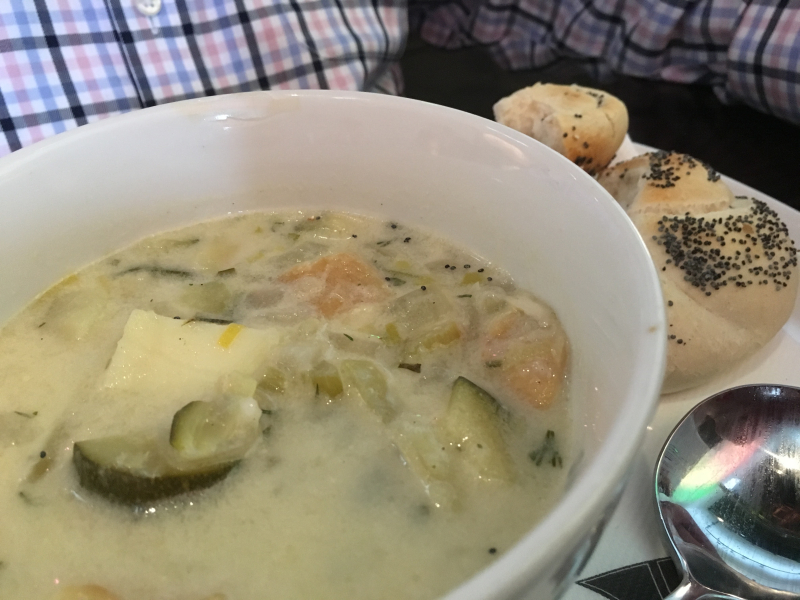 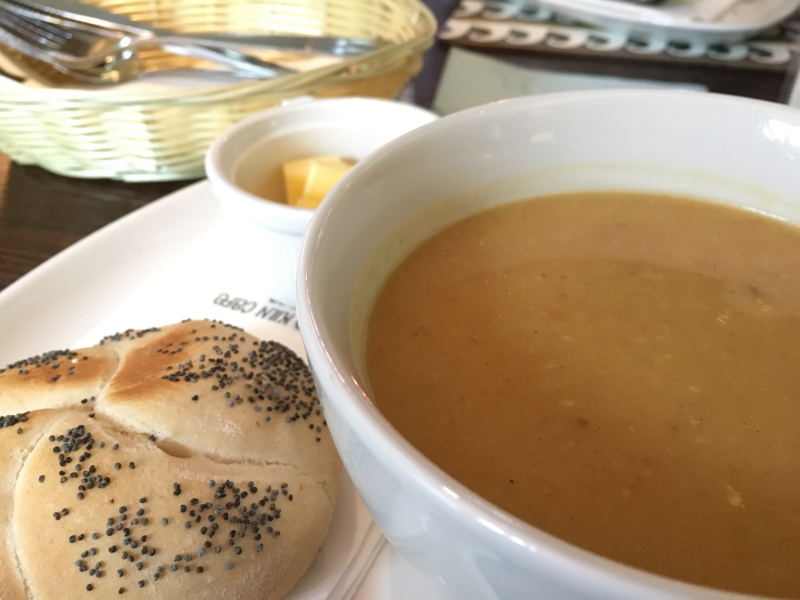 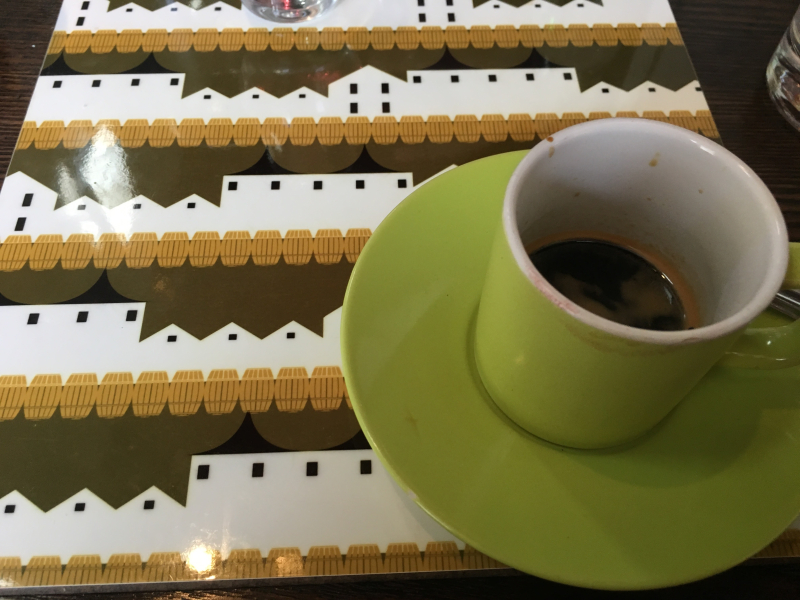 All followed by an espresso to wash it down, and wake us up for the tour of Ardbeg distillery to follow. Ardbeg was founded in 1815 when there were about 14 thousand persons living on Islay (today there are only 3000 on the whole island). It closed from 1981 to 1990 along with many other distilleries in the world and Scotland but was eventually restarted under the ownership of a larger multinational that includes names of liquors you know that are not Scotch.  I'll leave it at that.  Either way the Ardbeg tour had a very specific feel to it that others didn't – with a particular tautology (that included our tour guide repeating her own statements using different words and phrases multiple times) and a sense of purpose.

For example when talking about the graff left over from the mash bin process she said "We take the graff and we give it to the farmers, and they give it to their cows." And she said it in the most serious of voices as if this was the most unique thing the distillery could possibly do (except every other distillery on Islay does this). 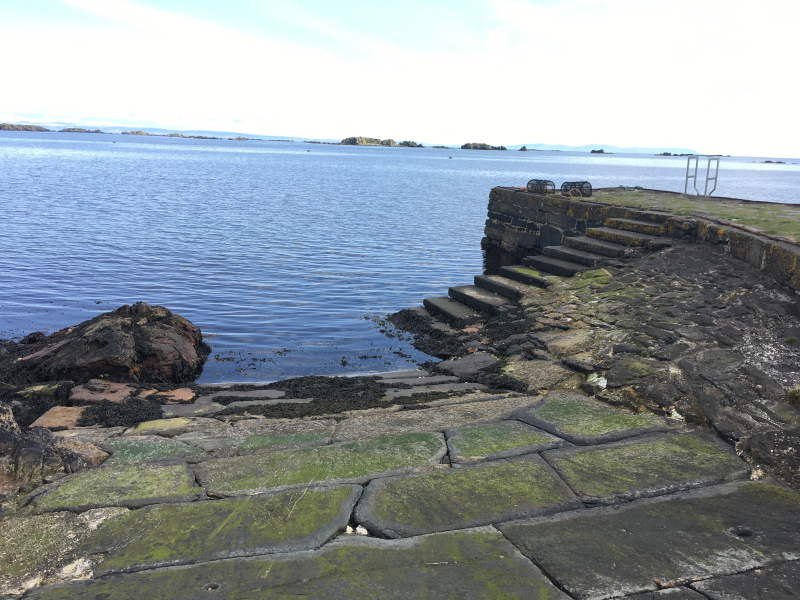 Ardbeg only has 2 stills but everything in the distillery is automated so they are able to run about 1.1 million litres per year through the facility with only two men on duty per shift. I could not take photos of their facility – but it looked just like the others only with a modern floor and only two stills. 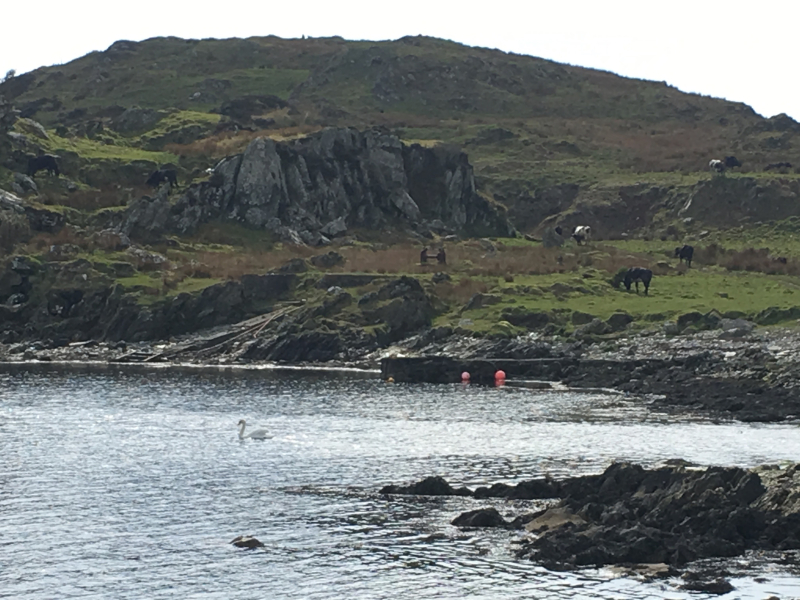 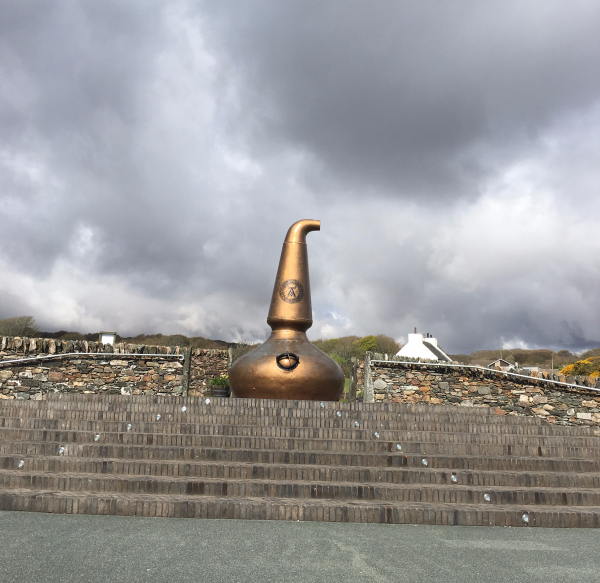 I wished it was possible to do the tour and the special tasting, but the timing didn't work out – but luckily we still got to taste an interesting selection of Ardbeg's stock after the tour.  We tasted their "fais" or festival bottling for 2017 called the Kelpie made in Russian new Oak grown near the Black Sea  and their Supernova which is 100 ppm of smoked peat.  Both should have been really weird but they were oddly good and strangely interesting. 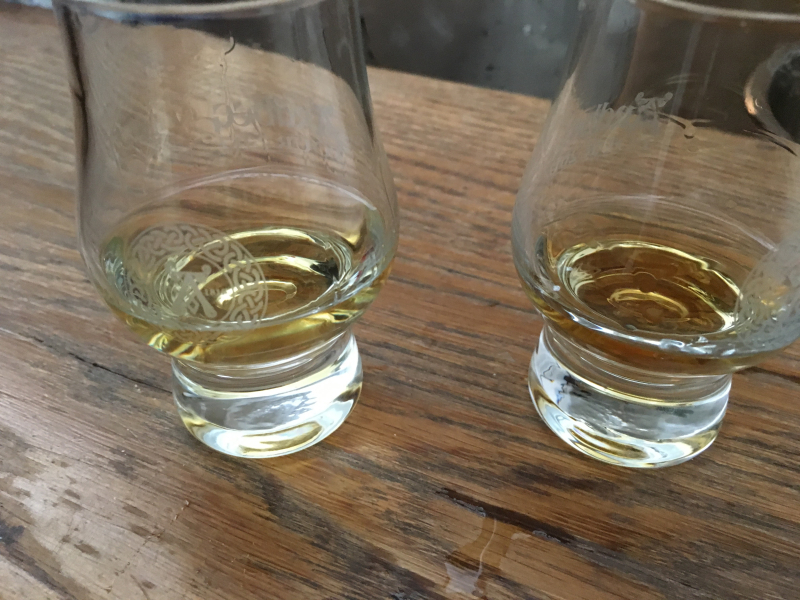 It was still a beautiful day when we left the distillery so we decided to do the three miles back to Port Ellen on foot to take in the sunshine and the sights. 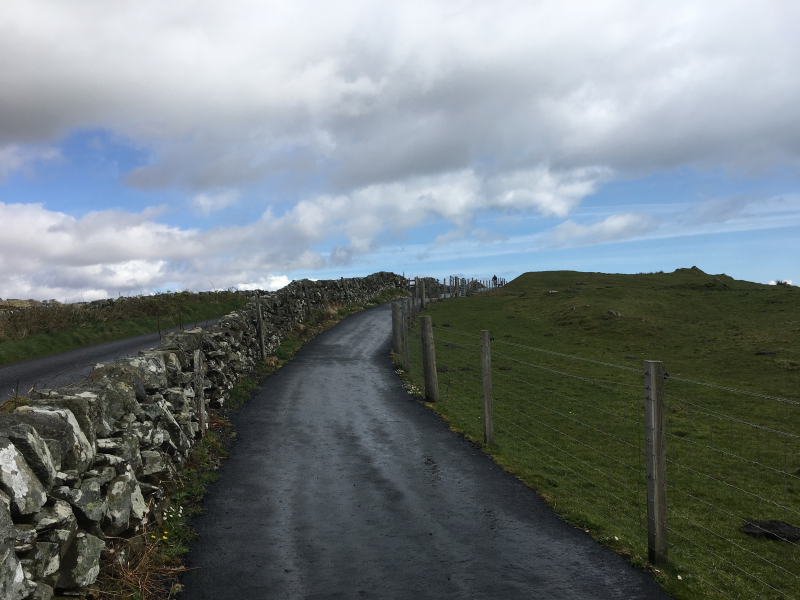 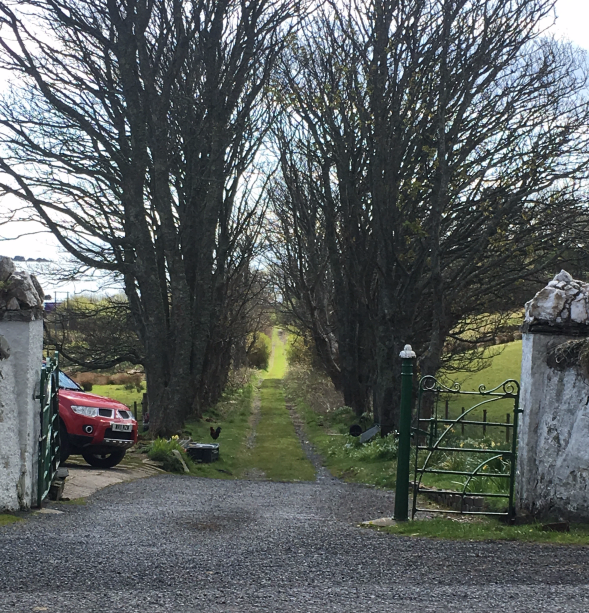 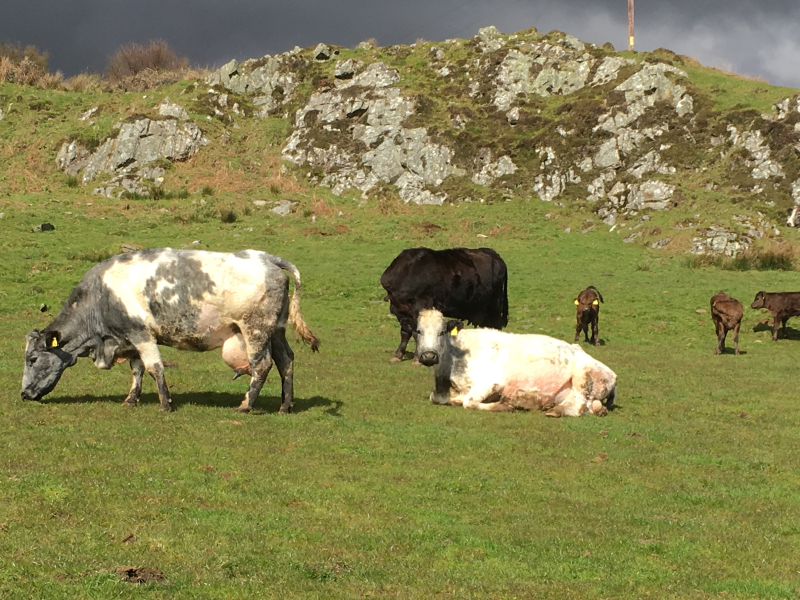 Eventually, only about half way back to Port Ellen we got tired – and then I started wishing that maybe we should have called Carol to drive us home after all where we still had phone signal. But just as I starting to get forlorn and very annoyed with my shoes – a lovely fellow in a grass cutting truck offered us a ride back into town. He inquired about Joy and her mom and asked us how we like Islay – it was just a normal and beautiful day on the island. I would be so sad to leave it the next day. 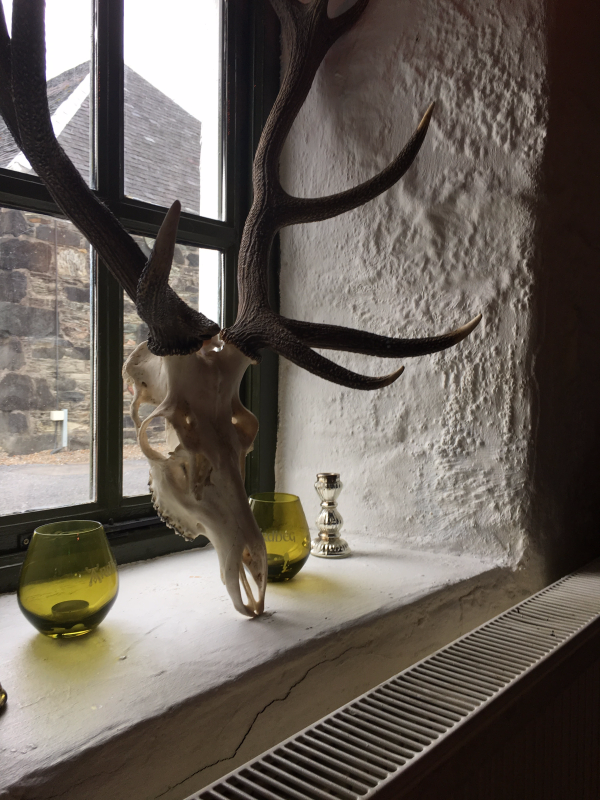