Saturday morning, we reached our final day in Savannah and our last full day in one place on vacation. Sigh. And we had the crazy scary option of "absolutely no plans!" We did this on purpose, leaving a day unscheduled, leaving ourselves with a choice of what to do without cramming something in at some breakneck pace. It is the first time we tried such a thing on one of these group vacations and I wonder if it was a success. But either way it happened. 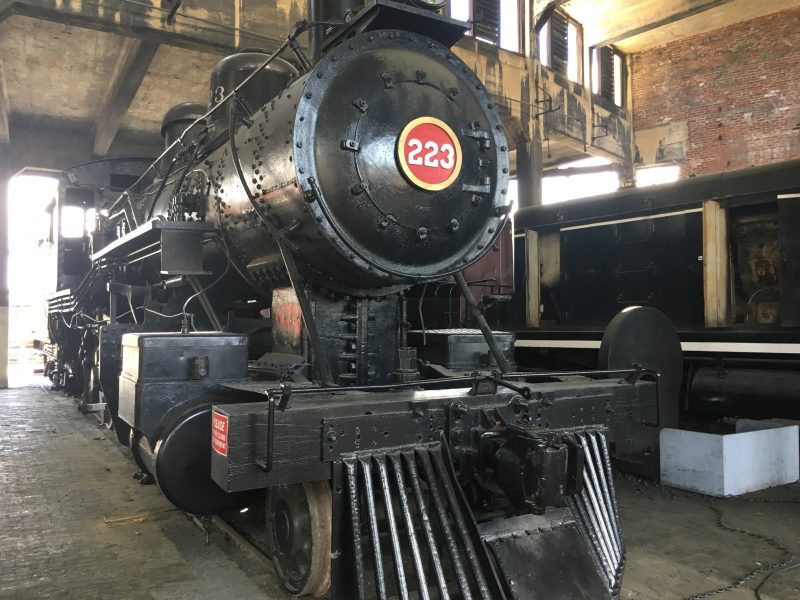 We ended up learning quite a bit of Savannah history, including industrial (trains) and Revolutionary War details – and were still able to take in some full on touristing by exploring the Central Market and attempting eat some ice cream. 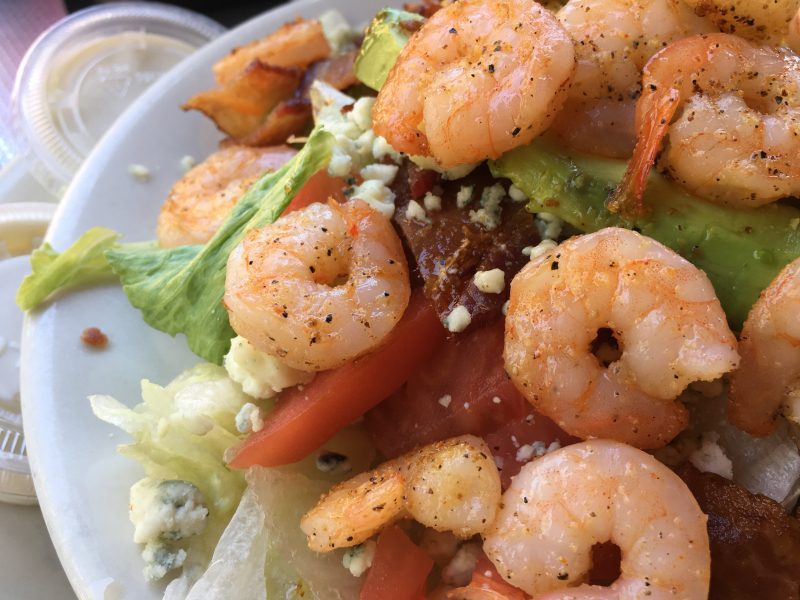 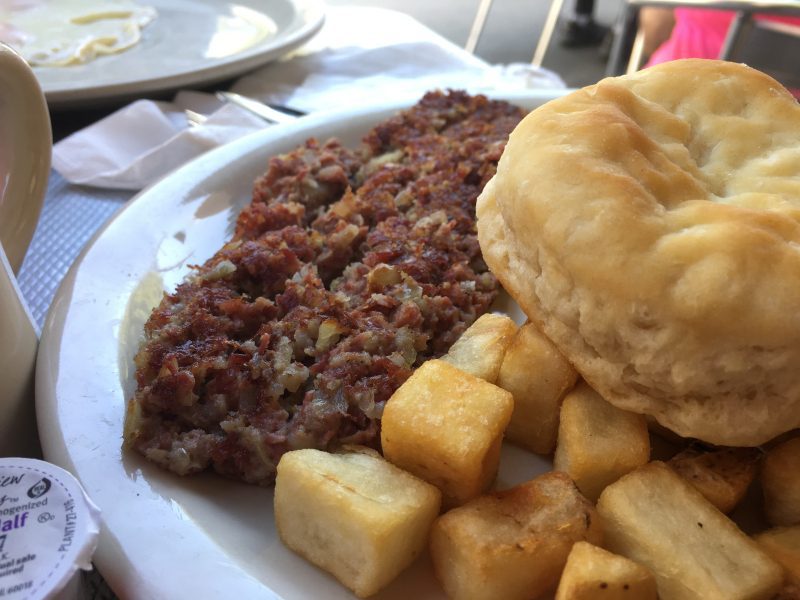 But before all of that there was breakfast at Clary's – a popular diner that makes it own hash and fresh baked biscuits. Finally there was a good biscuit on our journey.  The cobb salad was also pretty good. The corned beef hash featured the strong flavor of fennel – which I thought was great, but Dan covered it in ketchup anyway. 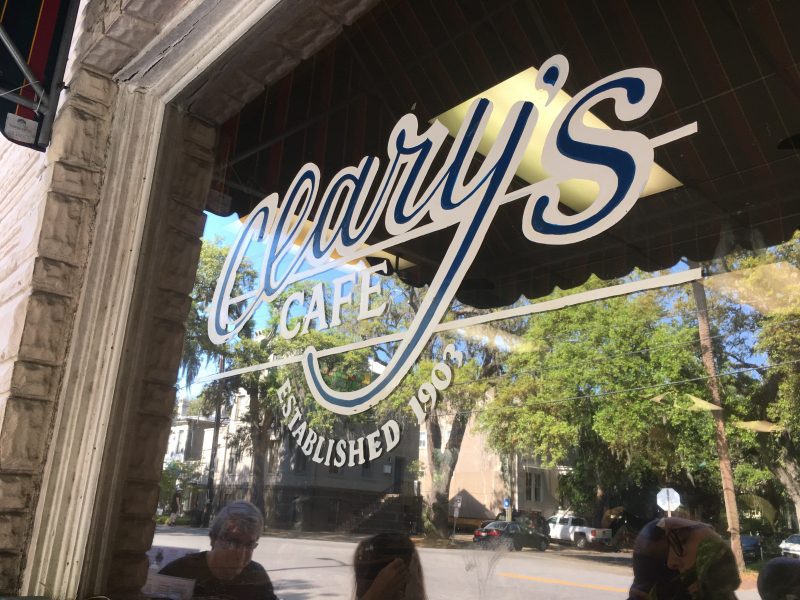 Fast broken we were ready to go find some more history in historic Savannah – so we headed for the Savannah Visitor's Center and the Georgia Central Railroad Museum. We first encountered the reconstructed redoubt from the Battle of Savannah – the second most bloodiest battle of the Revolutionary War, with 800 dead and a loss by the continental army of the area then known as Savannah. 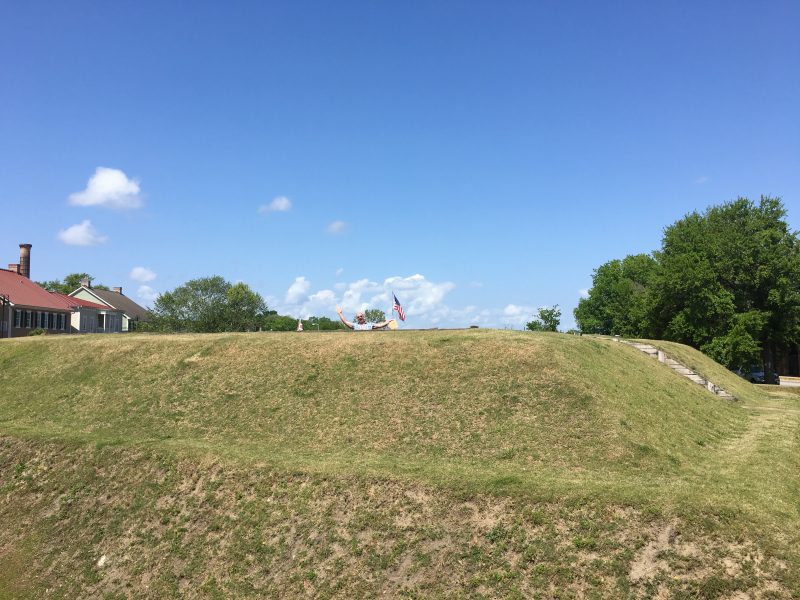 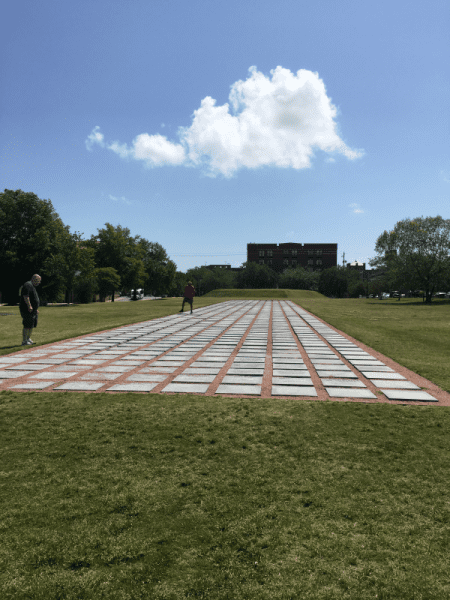 The redoubt of Spring Hill is reconstructed complete with lights and drainage and explanations of all of the troops who fought against the British with the future Americans. At the Battle of Savannah were Haitians, French, Polish, and German troops on one side along with the British, Scottish and Irish on the other. Some might say the Revolutionary War was the first World War (according to one of the historical markers). The memorial pictured above has exactly 800 squares for each of the individuals who died in battle and it is arranged like a flank of troops. 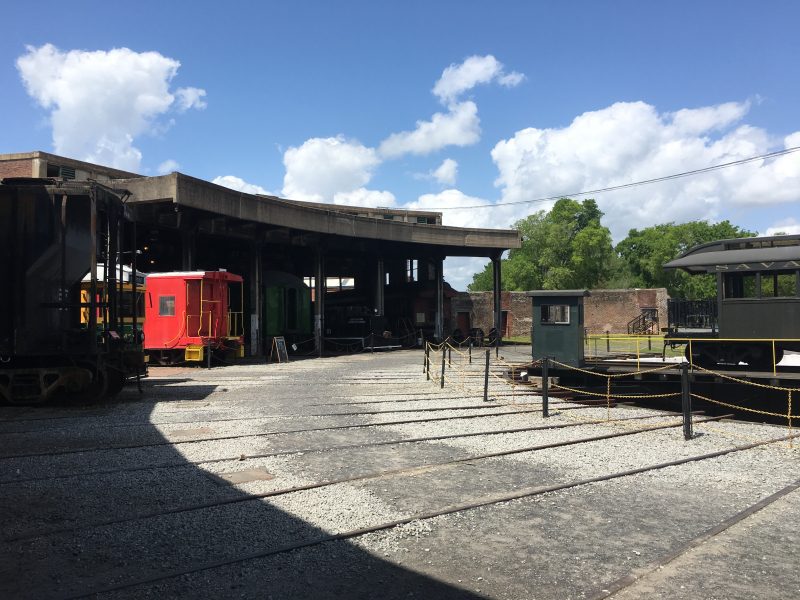 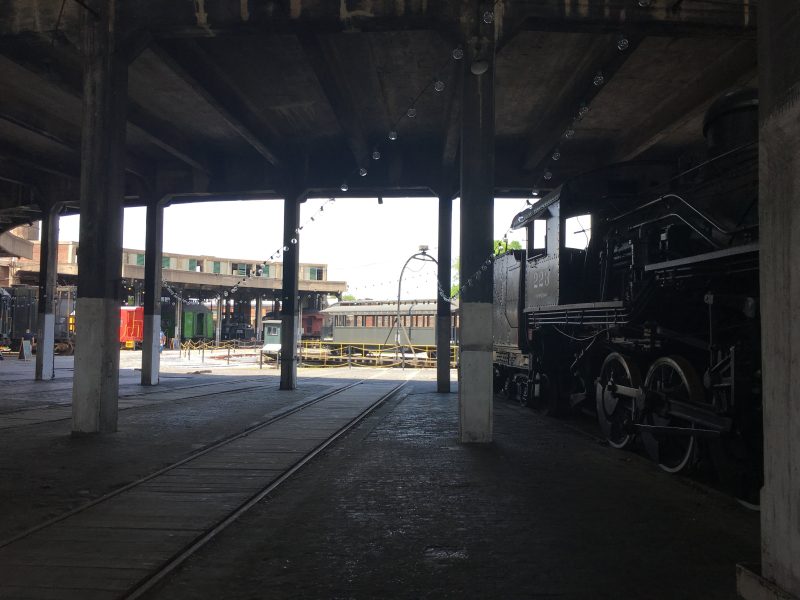 Right behind the war memorial is the Savannah Railroad Museum. It features the original roundhouse from the Georgia Central Railroad, at least one or two steam engines, and a number of other "reclaimed" and restored rail cars from different eras for different functions. 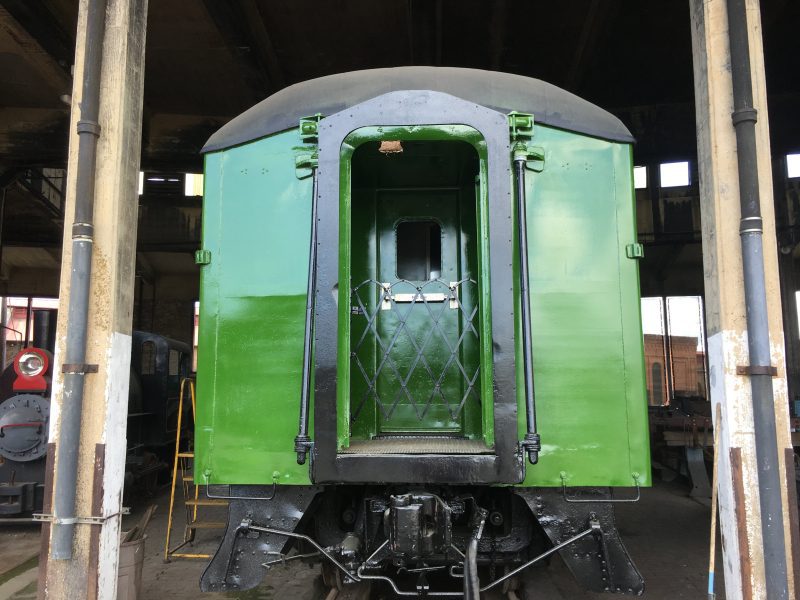 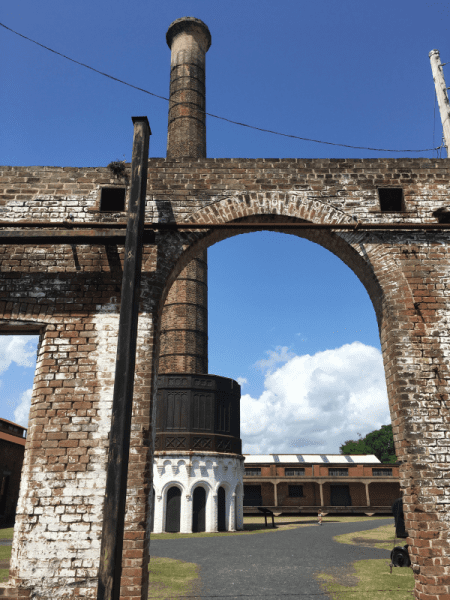 The city of Savannah was able to take the historic site back from the railroad as a result of a legal clause in the original deed to the land that said an "operating" railroad had to be on the location or else it would revert back to the city. When Georgia Central shut down it started selling the brick from the site in order to make income. A local preservationist got upset as the smokestack (pictured above) started disappearing and then lawyers and the city got involved – and the site was reclaimed by the city thanks to that brilliant clause put in the deed many years earlier. A lesson in why it is important to have a good forward thinking attorney. The museum is now managed by the Georgia Heritage Society and they are looking for donors so they can rebuild the viaduct so the stream train ride can do scenic tours throughout the Savannah area – but until they raise the $5 million necessary their trains shall stay landlocked. 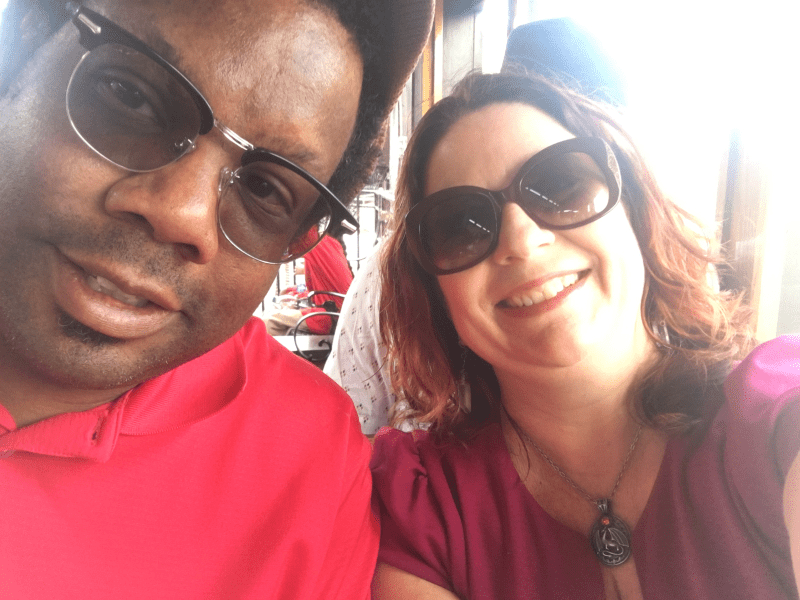 Here we are at the beginning of the train ride, all ready to go on a steam engine pulled train. Then less than a minute later it was over. But first there was stop on the round house turn table and a look inside the repair shop where we got to see historical graffiti. 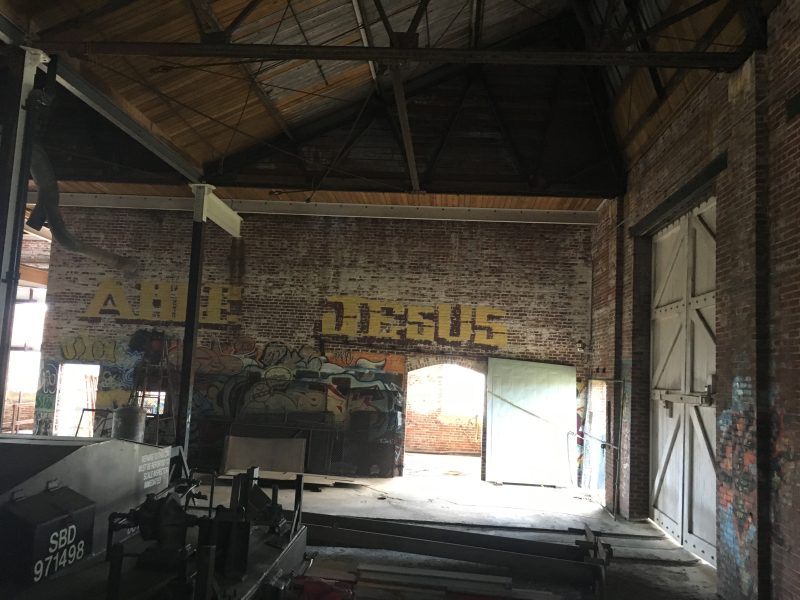 After the trains we were a bit museumed out so we headed for Alley Cat Lounge, a place on our list that everyone but Jeremy forgot about – but luckily he remembered it because it was a lounge to remember. 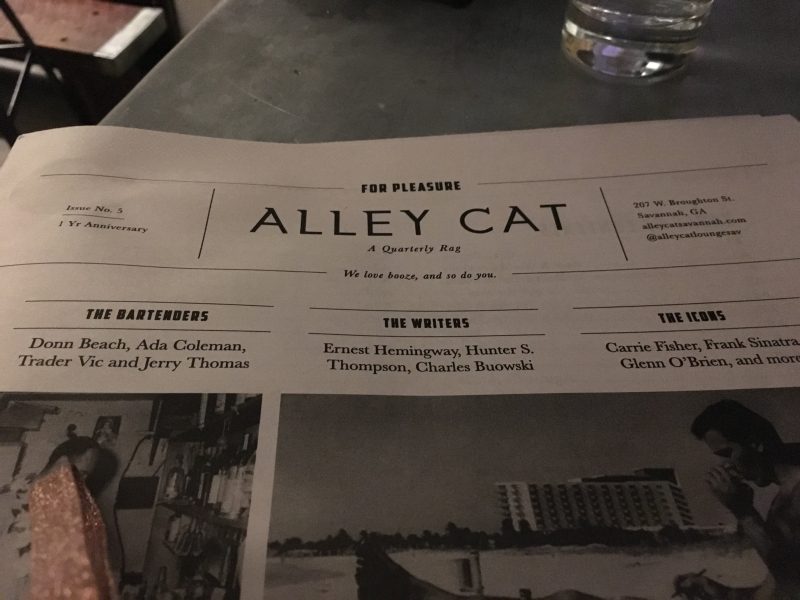 Especially their 25 page menu of beverages. The menu doubles as a publication covering in this issue writers and singers of the past and their relationship with alcohol. It also included the history of the first use of the word "cocktail" and the menu of drinks from the movie Cocktail if there is anyone out there who still wants to drink a Sex on the Beach. Yuck.

I have to admit the menu and its encyclopedic amount of choices was a little overwhelming but I was able to narrow my choice down to a Triple Crown Julep. It was a hot day in Georgia after all, why not have a variation of a Mint Julep. 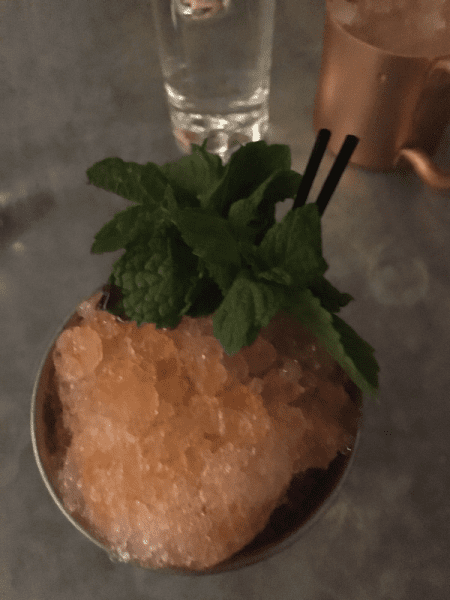 I wanted to try another round but the natives were getting restless to find ice cream so we carried on in the heat of the day toward Leopold's. Except Leopold's had a line a block long, as a result we had a minor little hiccup and a brief moment of not knowing where to go but then we got over it we did a little aimless tourist wandering through the market. 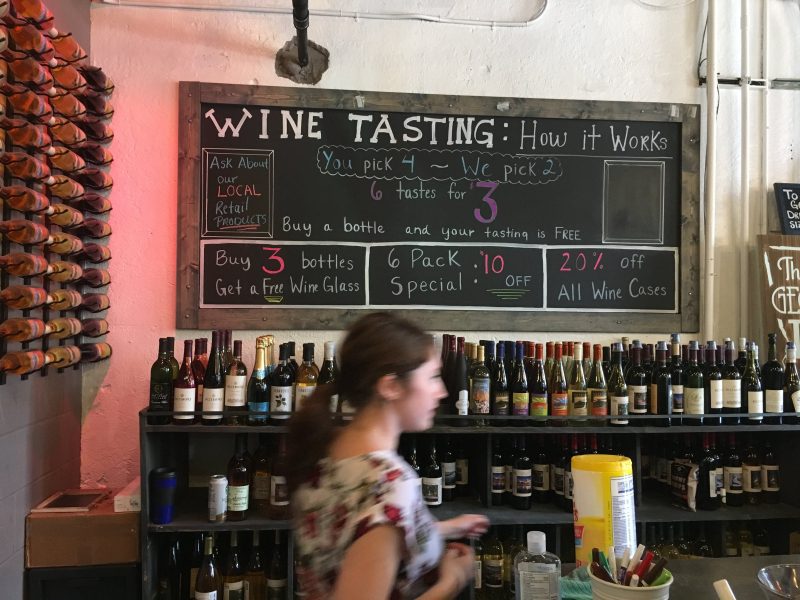 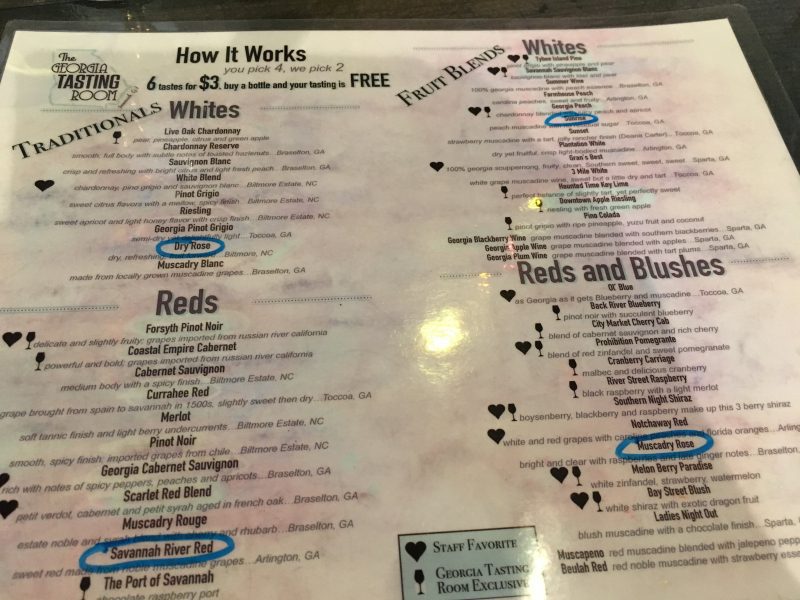 Lamar and I found wine tasting of locally grown and made Georgia wines – at the price it was worth a try -even with varieties with the name Pinot Colada. Which was actually the best wine of the 6 I tasted – a mix of Pinot Grigio with pineapple and coconut fermented in it. Who knew? And why try fermenting fruit with your wine? The Georgia native Muscady grapes weren't that bad but the wine making was just a bit off (go back to the why? question above). I have to admit that the Georgia wine was not as bad as what I tasted on the Tennessee Wine Trail, but it was still not very good. It was however, an experience of the terroir of Georgia, and thus worth every mediocre sip. 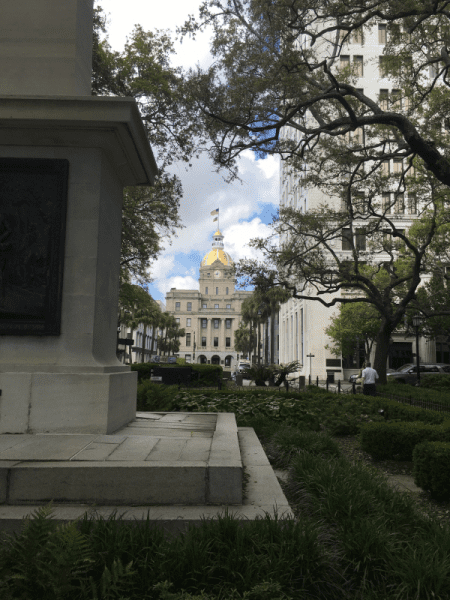 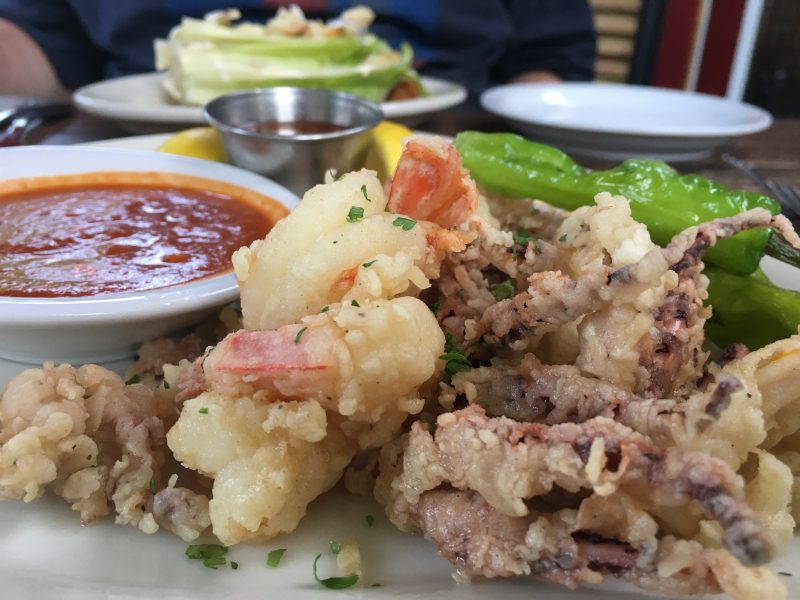 We eventually stopped wandering and decided to go to dinner – this time to a neighborhood Italian eatery that didn't require reservations. But it was still quite good and had yet another deck for outdoor seating. 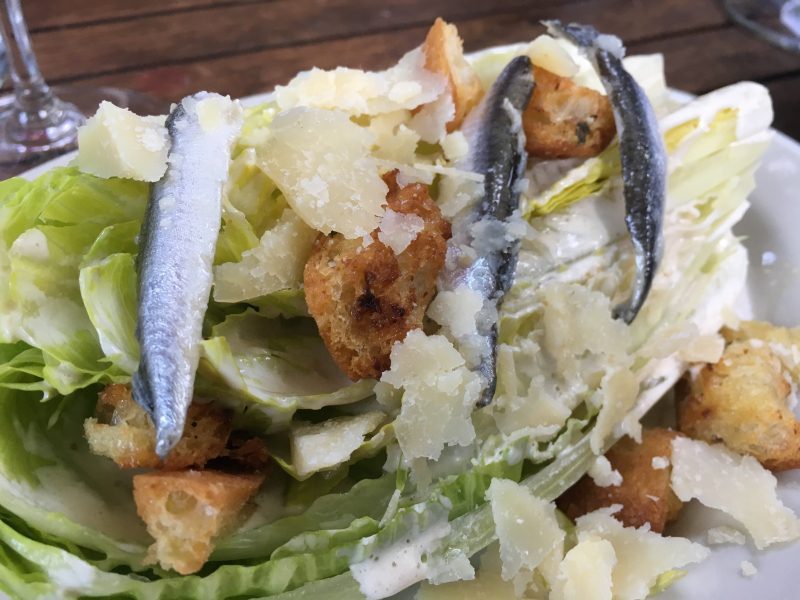 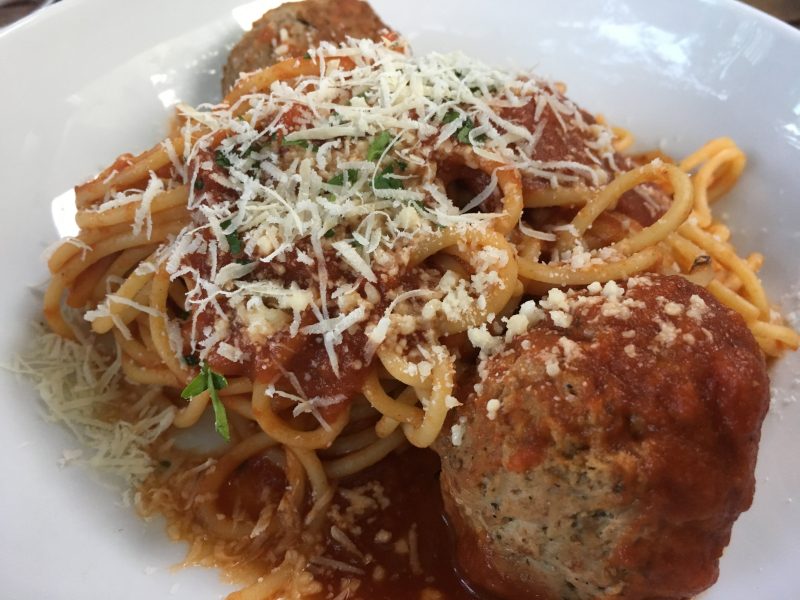 The ceasar salad a spaghetti and meatballs were the bomb, and so was this chocolate lava cake. 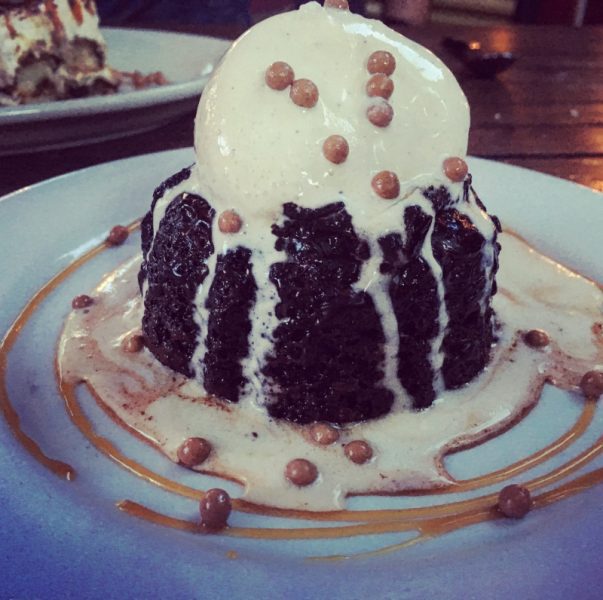 It was totally worth the extra calories and feeling of extreme satisfaction after a meal to eat the cake. A great end to our stay in Savannah – as tomorrow would hold a journey back to Atlanta and possible thunderstorms or worse. Vacation was starting to come to a close.