Wednesday, middle of the vacation week in San Diego, meant it was time to move Airbnbs and travel to the surrounding area to take in a little nature and culture beyond the beach surfer scene of the Mission Beach peninsula.  So we packed our bags, rented a car, and left our beach bungalow behind. 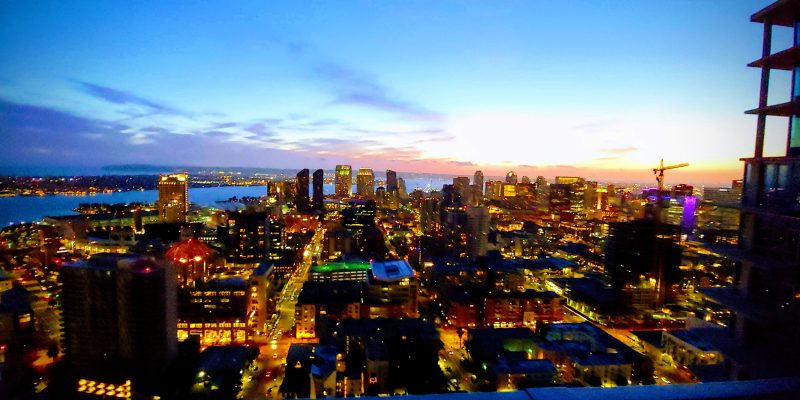 First we drove North to La Jolla to see how the other half live. They live quite nice – especially if you are a sea lion. 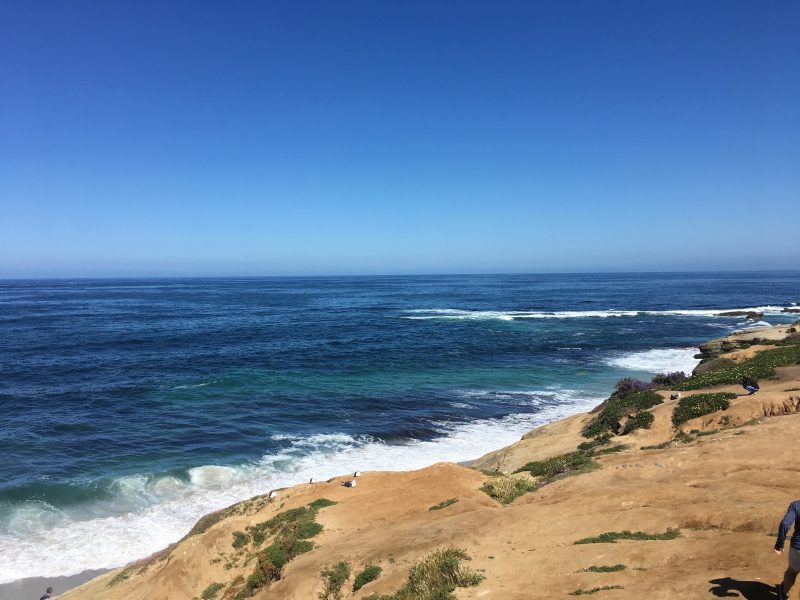 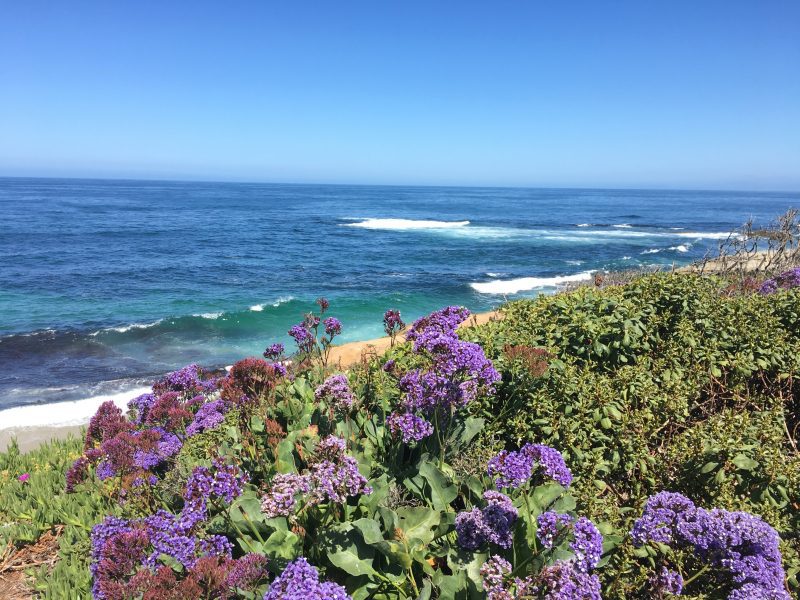 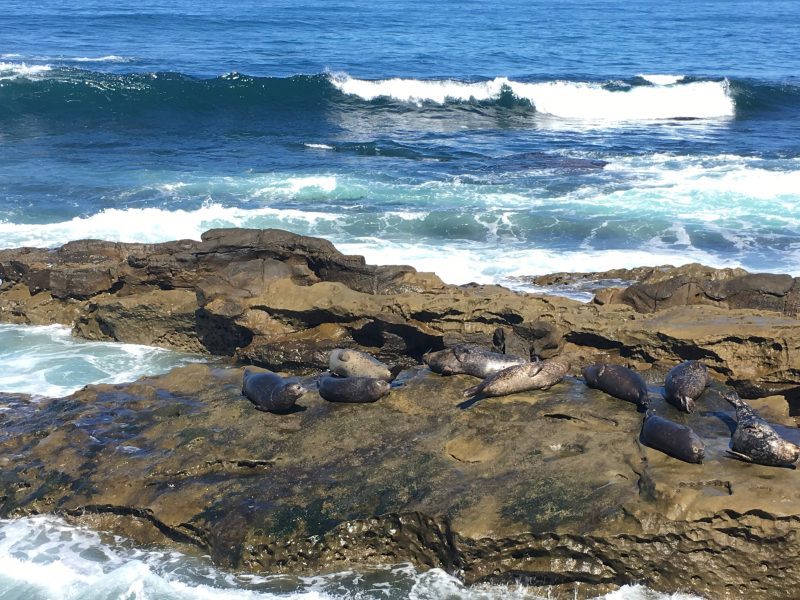 Sea lion cub season goes until May so there are many many sea lions on the beach. This might happen all year round, but at this time of year it is essential that humans do not disturb them. However, there we all are standing on the sea wall, taking selfies and pointing to their bodies lying on the beach in various forms of contented relaxation. 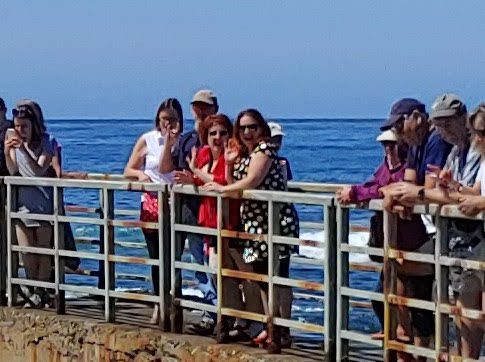 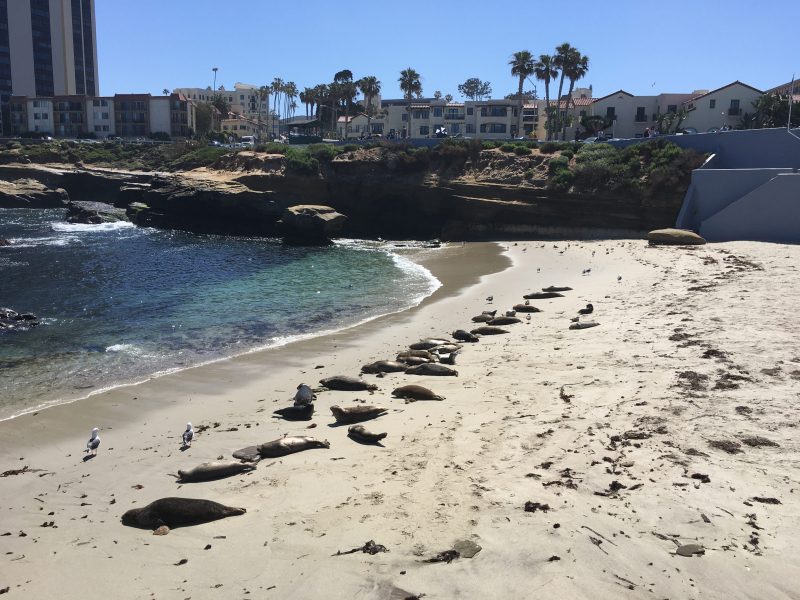 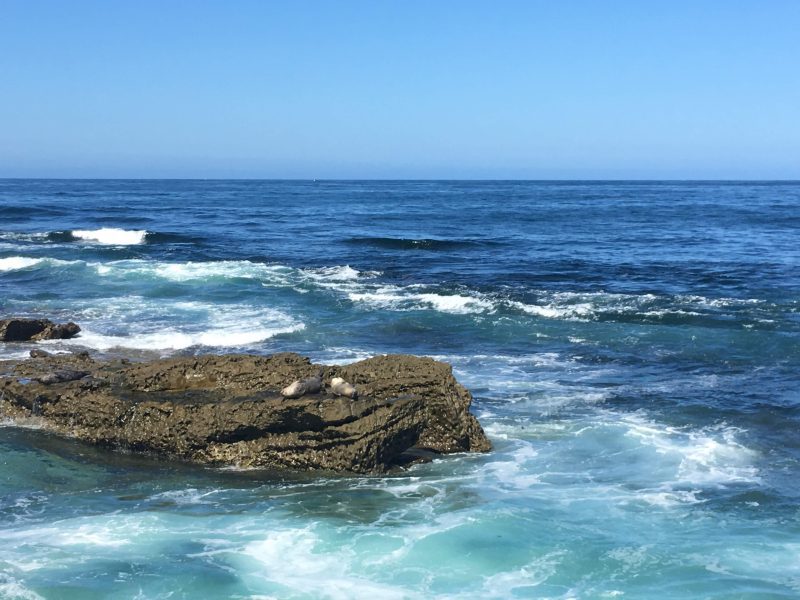 There is a distinct smell to the water – kind of like poop, as you drive up. You eventually get used to it a little, but not super well. It is apparently the sea lions, but don't tell them, we wouldn't want to hurt their feelings. 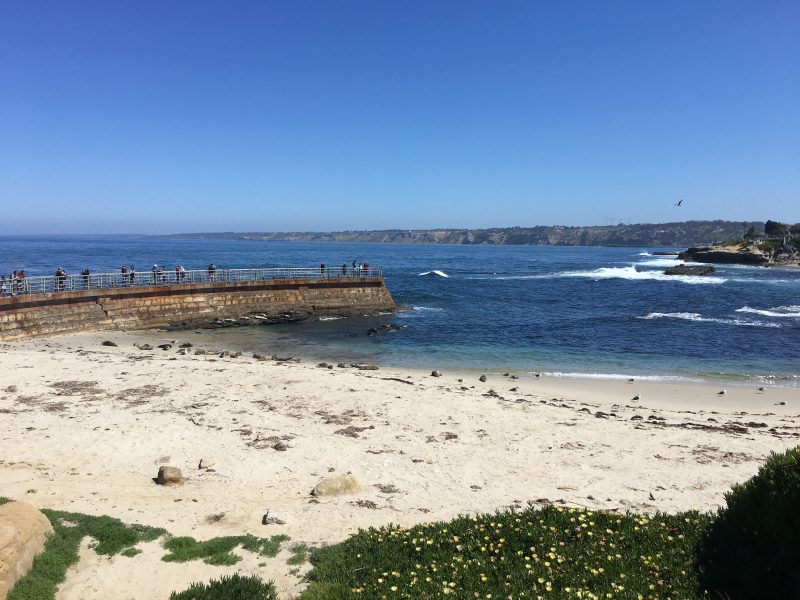 After standing in the mid-morning sun staring at the sea lions we eventually moved on to go to lunch. Well, initially we went to see more sea lions but there was no place to park and I was hungry and everyone else agreed that it was lunch time. I wanted beach front dining of any food we could find with outdoor seating overlooking the ocean. I was overruled for sushi. 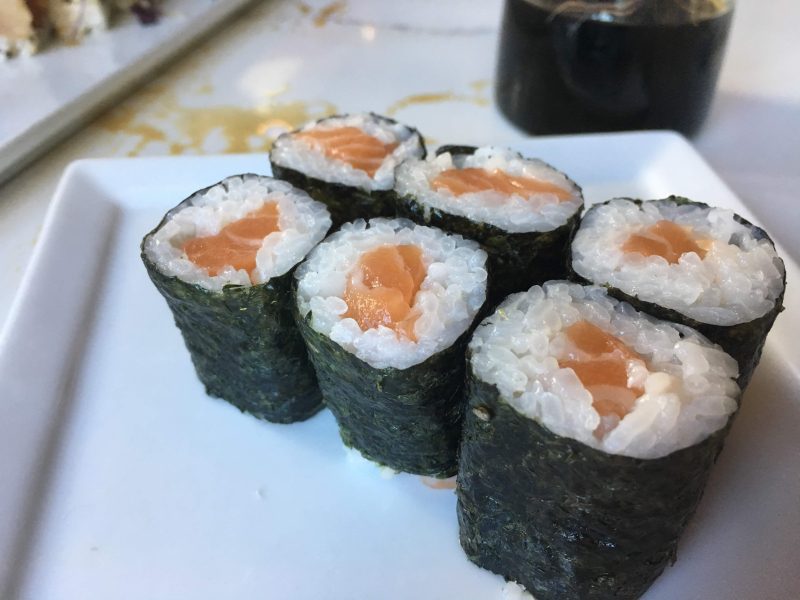 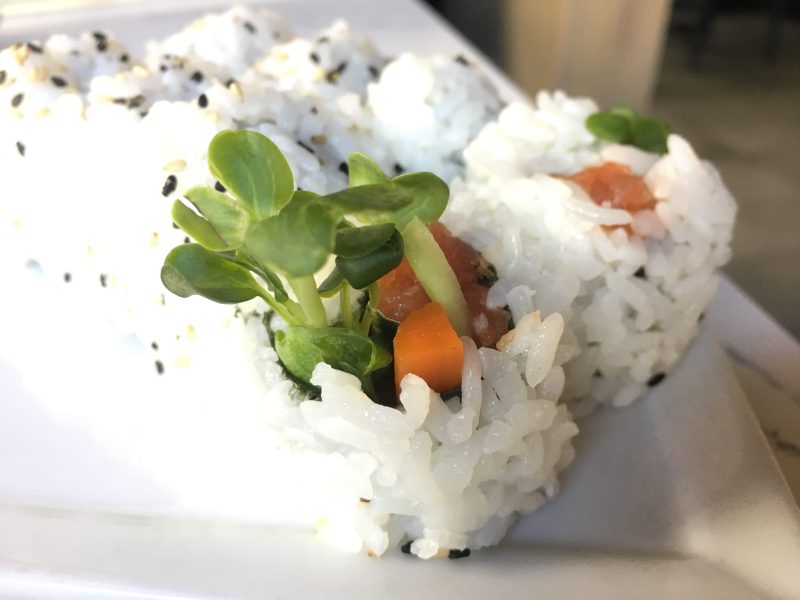 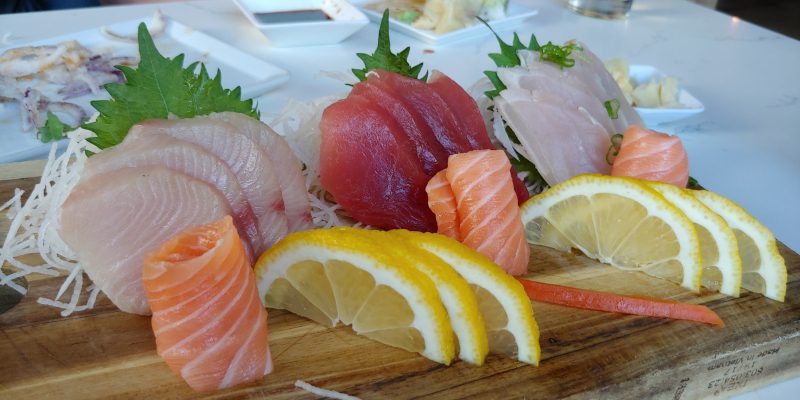 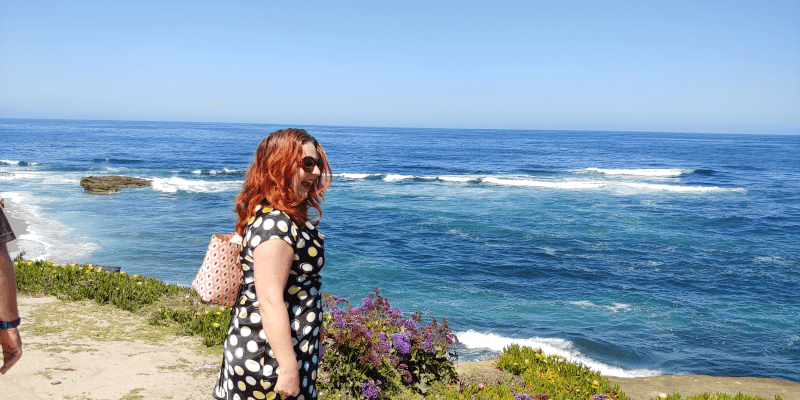 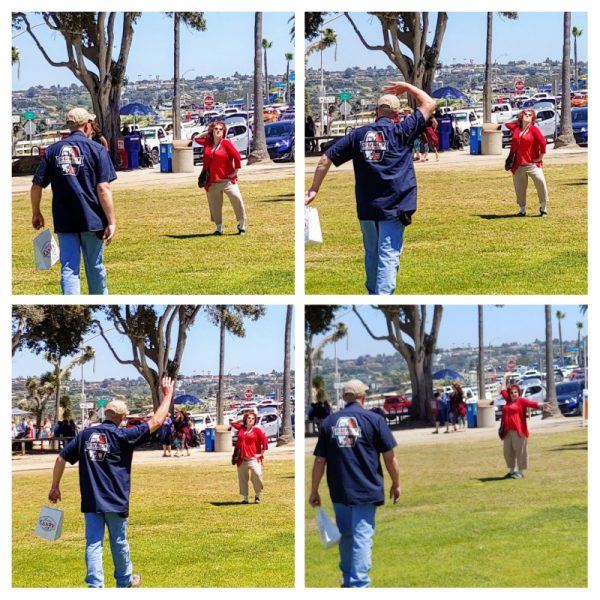 before we packed up to go explore some more of the greater metro region. I was able to declare a grocery store adventure to Northgate Market where we finally found the elusive fresh tortilla and a mile of ceviche. 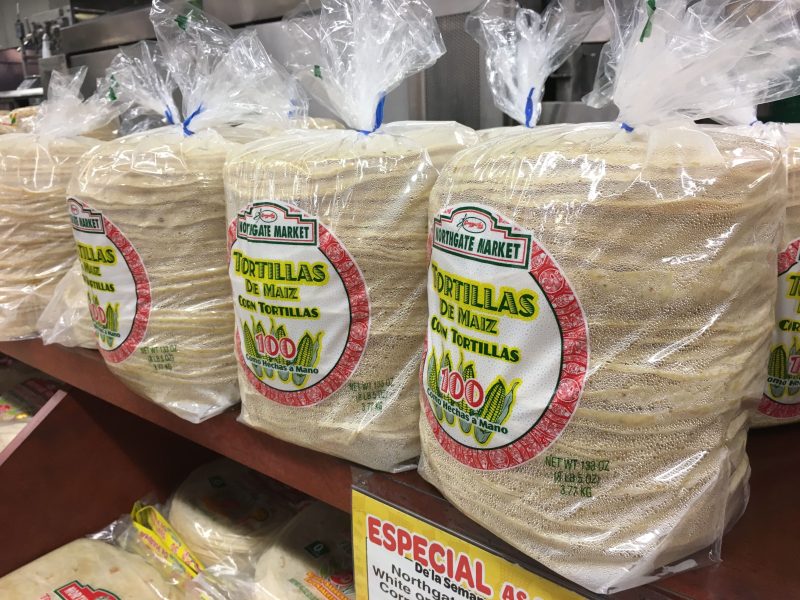 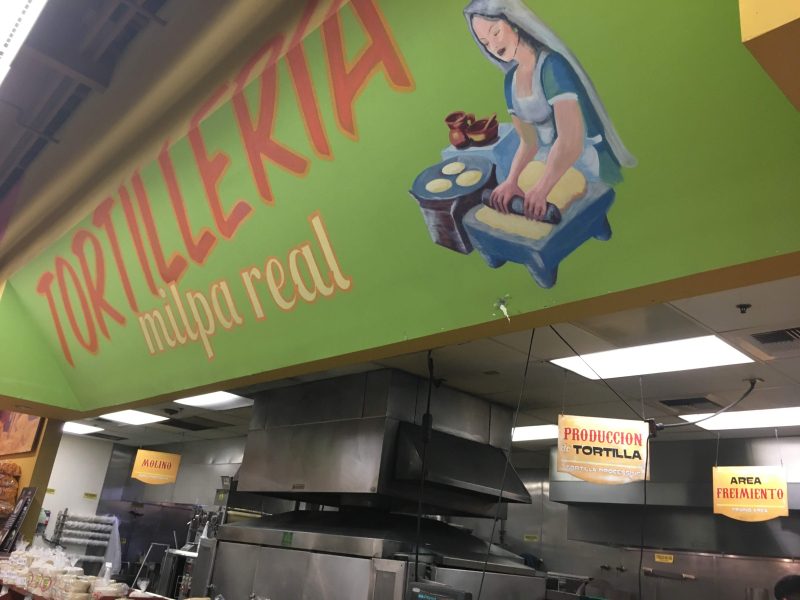 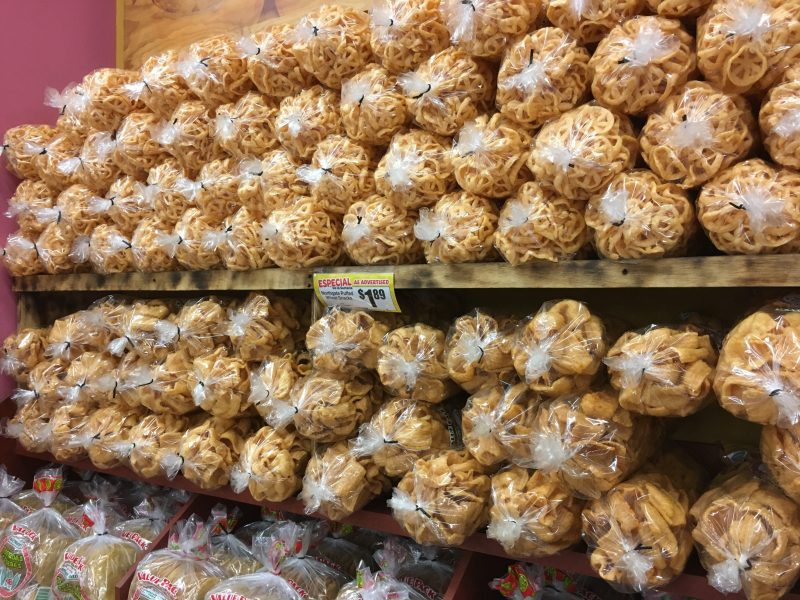 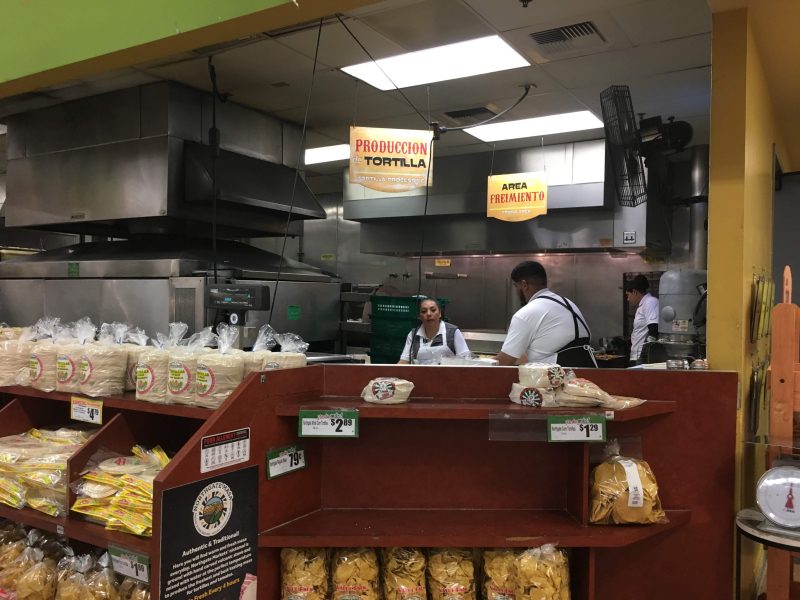 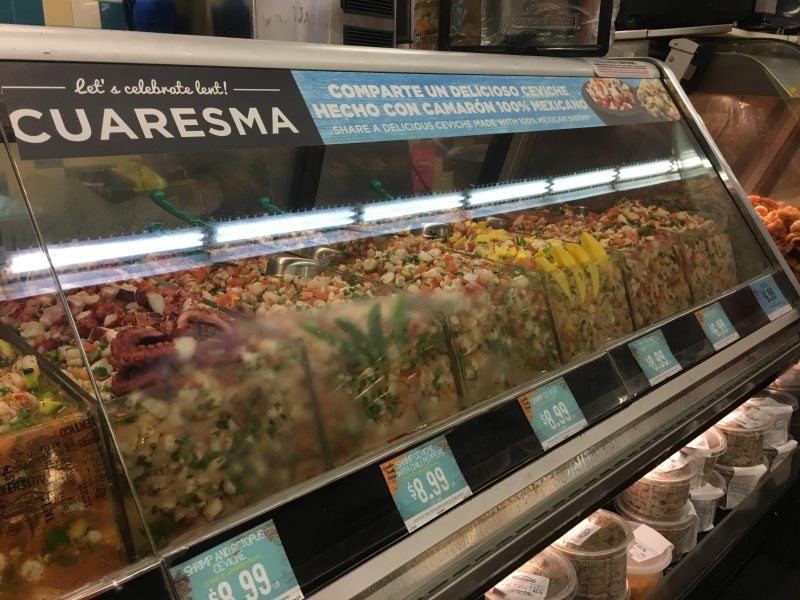 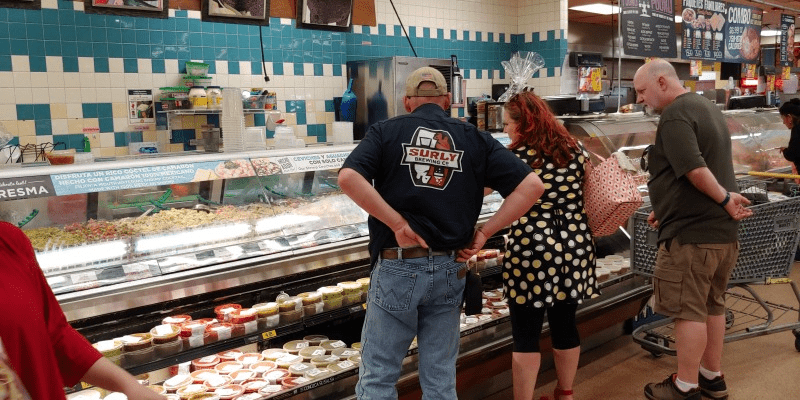 After wandering the amazing cocina de mexicana grocery store, debating whether or not to buy a cow tongue for tacos, and determining we couldn't overload our rental car with supplies before we knew if our Airbnb was legitmate or not – we settled on sticking to the purchase of tortillas and ceviche with a side of carne for tacos that night. Then we headed for Chicano Park and its historic graffiti. 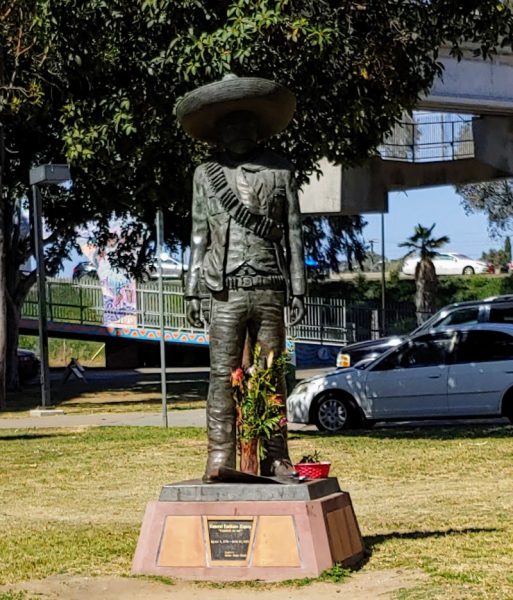 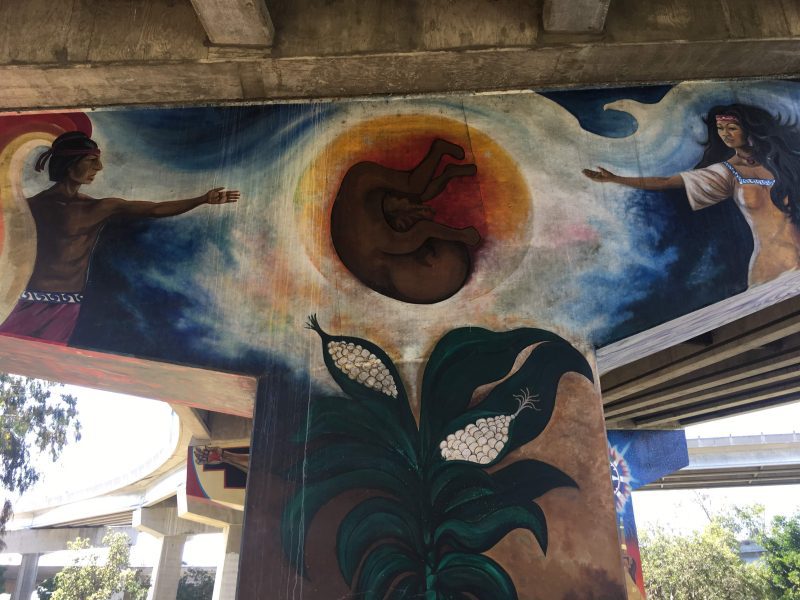 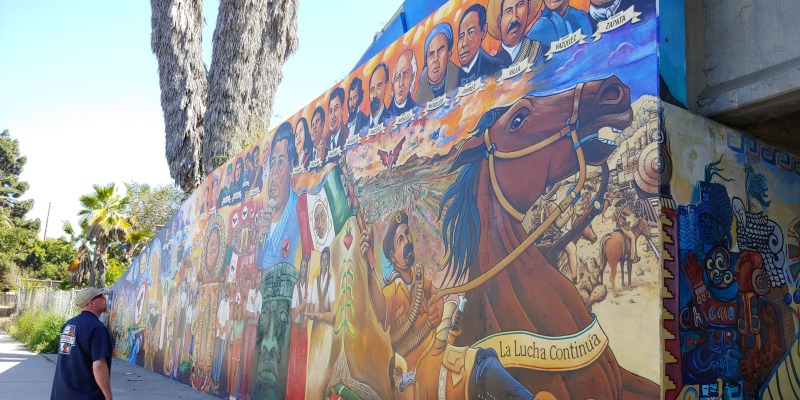 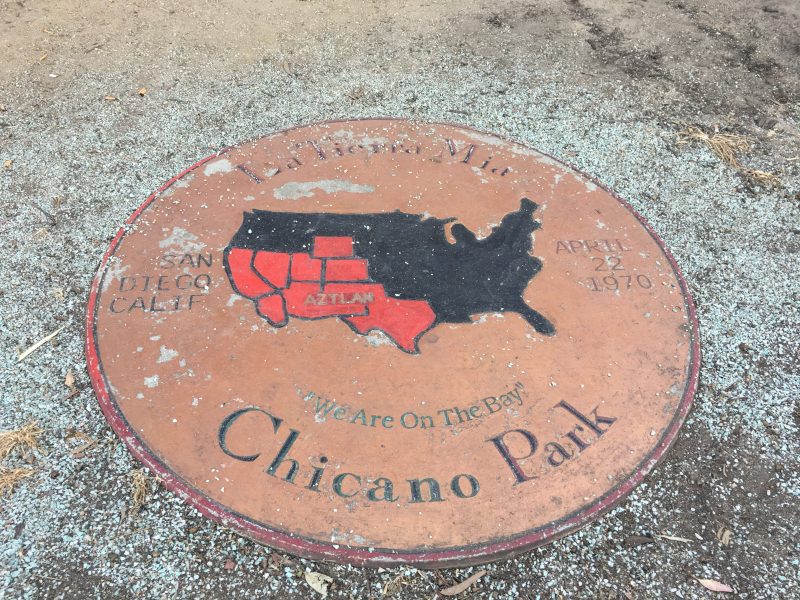 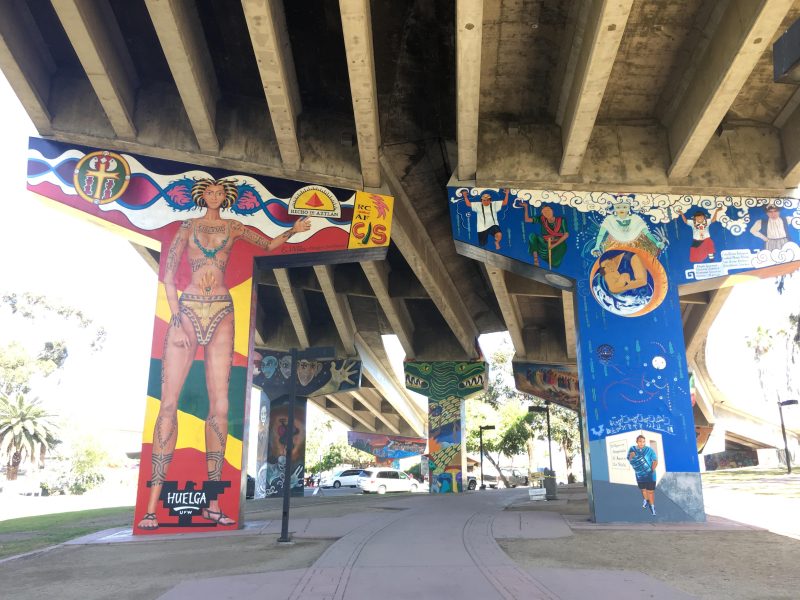 The park is about to celebrate the 49th anniversary of Chicano Park – which is not the anniversary of the park per se but the uprising of a community to demand that their community and land be recognized.  April 22, 1970 was the day bulldozers appeared to build a highway patrol station until the pylons of I-5 and the Coronado Bay Bridge. This is after the community, now bisected and decimated by 8 years of Interstate and Highway projects (Barrio Logan was once the heart of the Mexican American Community of the West Coast – and after I-5 was built separating it, and Coronado Bay Bridge caused the closure of a significant number of businesses it was reduced to 5000 residents and a shadow of itself) the community demanded a park under the Interstate bridges.

When the bulldozers arrived to build the highway patrol station, this was the last straw and through some immediate community organizing the community stood up and occupied the park – transforming the land into desert gardens and turning the pylons into things of beauty, sharing Mexican American Heritage and culture. A speech to the city council by a young man from San Diego State said "The word culture is used. To you culture means Taco Bell and the funny Mexican with the funny songs. We gave you our culture of a thousand years. What have you given us? A social system that makes us beggars and police who make us afraid. We've got the land and we are going to work it. We are going to get that park. We no longer talk about asking. We have the park." 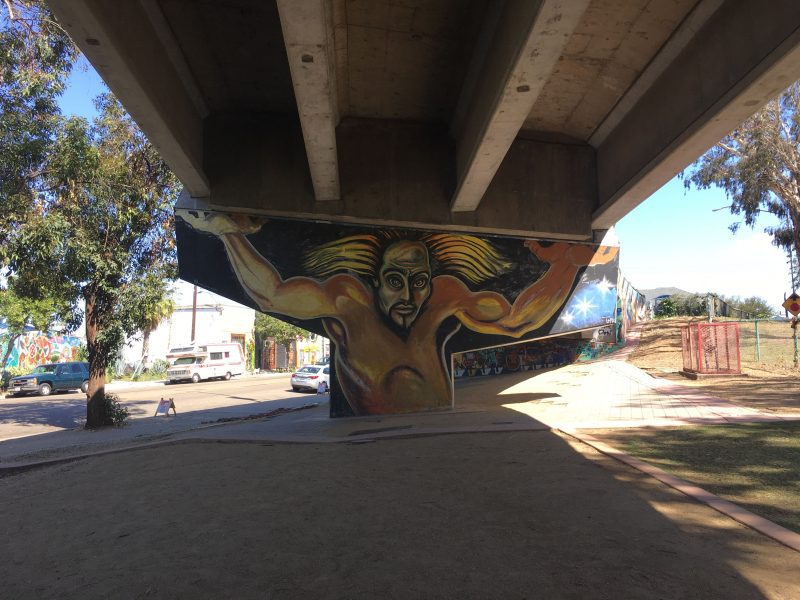 And so they did get the park and Barrio Logan continued until it became the center of homelessness in San Diego and target for gentrification in order to solve the homelessness problem. Or at least so said our possibly jaded Lyft driver as he almost hit a zombified drug addicted woman slowly crossing the street as he drove us from the market to our high rise Airbnb home. 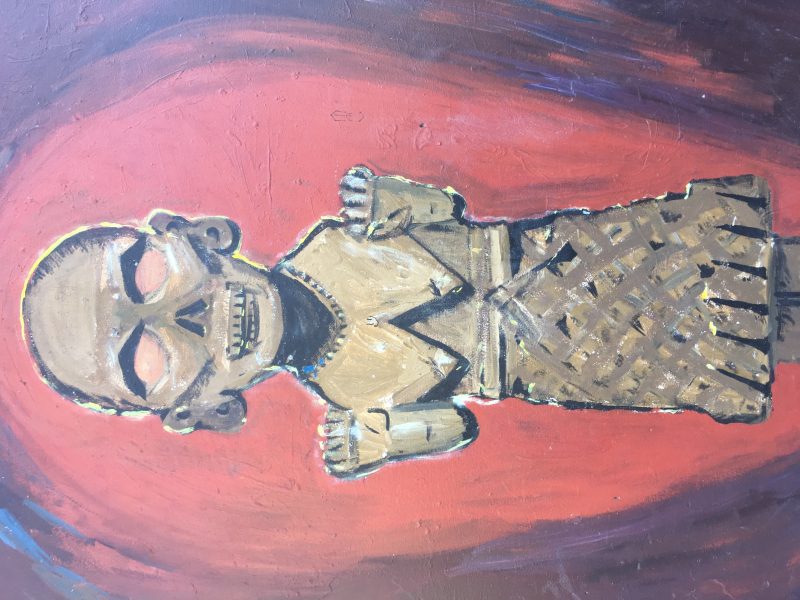 Like good tourists we put ourselves right in the center of the current debate happening in this city. Gentrification as a solution to the homelessness problem in a neighborhood and tourism placed in the center of said gentrification.  As we waited outside our Airbnb we knew there was a story to the situation. The Airbnb hosts had written messages in ALL CAPS about how we must "WAIT OUTSIDE by the door labeled 430 and NOT GO INTO THE LOBBY TO CONGREGATE!" Clearly, this high rise community was not thrilled with the existence of Airbnbs among them.  Upon meeting our host and receiving the fob keys as if we were doing a drug deal our host said "The staff just don't want to be bothered by our guests asking stupid questions."  I nodded nicely but filed away the information that our presence in this building was not liked, nor was the presence of these high rise buildings in this community necessarily welcomed. 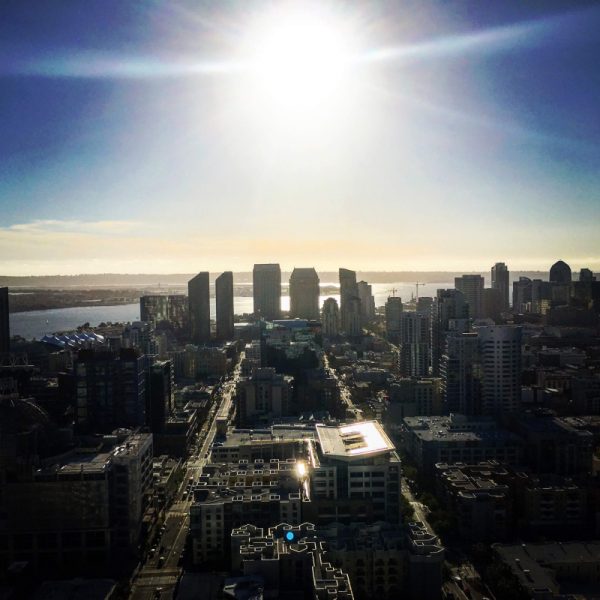 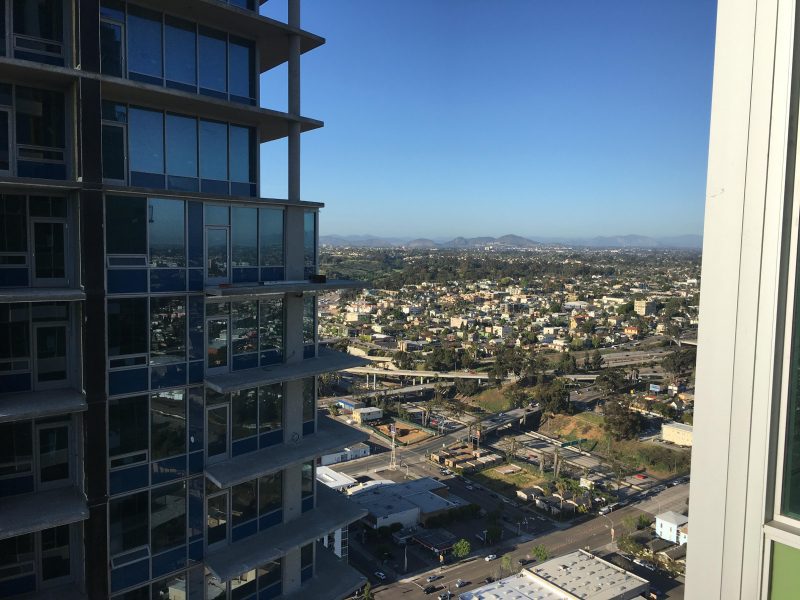 Meanwhile, we have quite the view from the 41st floor.