This morning I had a plan, it involved making it to three major London sites and maybe purchasing tickets for a Shakespeare play at the rebuilt Globe Theater. My plan started, thank you Seattle friends who recommended this, with the Tower of London as early as possible in the morning. 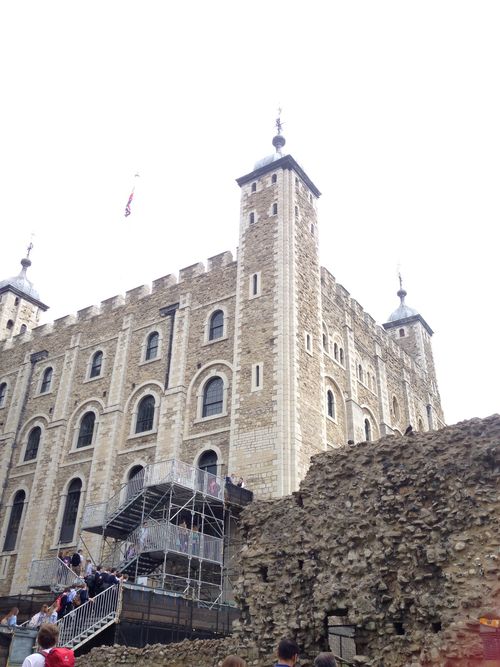 Despite my best intentions I didn't get to the Tower until 10am – and I thought the tourist hordes had already beat me there – but by 12:30pm, when I was very aware that I had been there at the slow time of day. 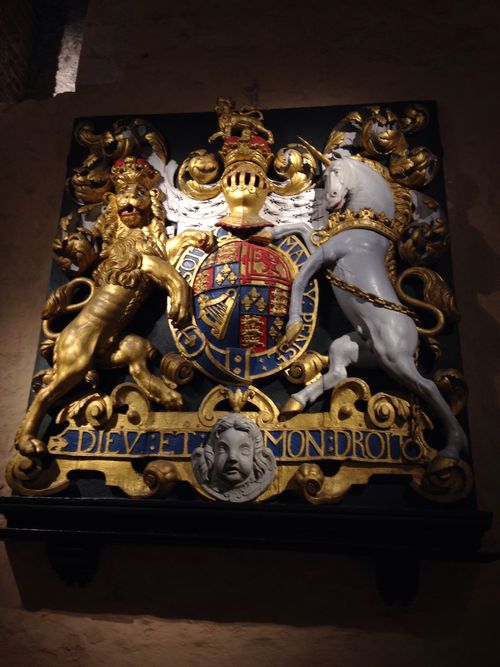 Learnings from the Tower: 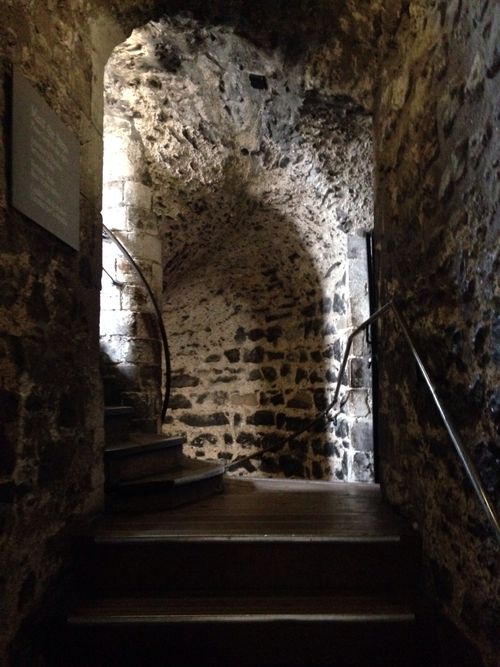 1. There is a lot of armor stored there 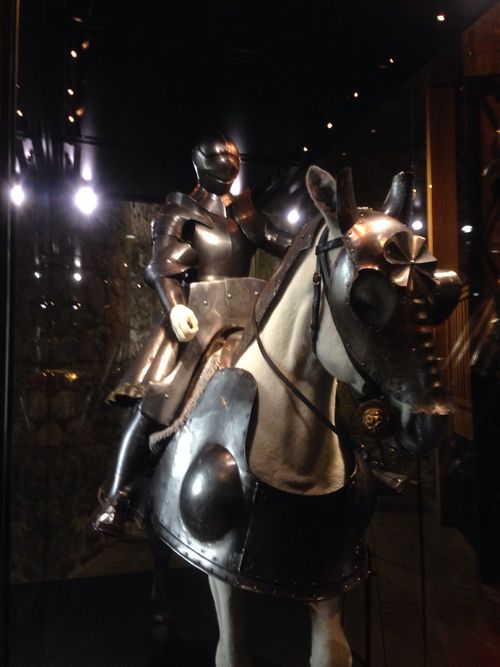 2. The Crown Jewels exhibit is sponsored by De Beers 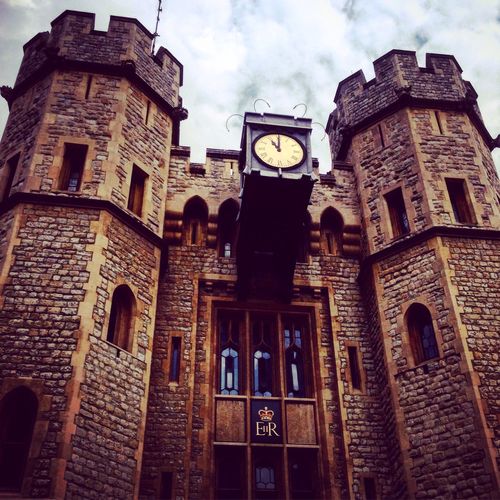 3. The giant ravens that live at the Tower have their wings clipped so they don't fly away 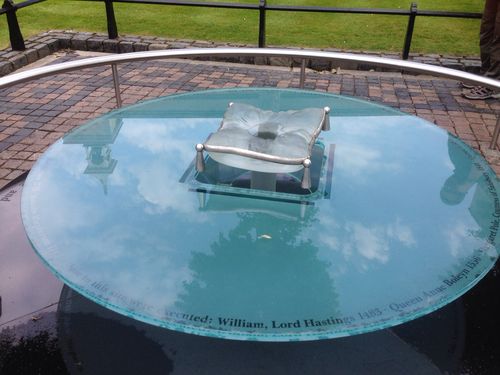 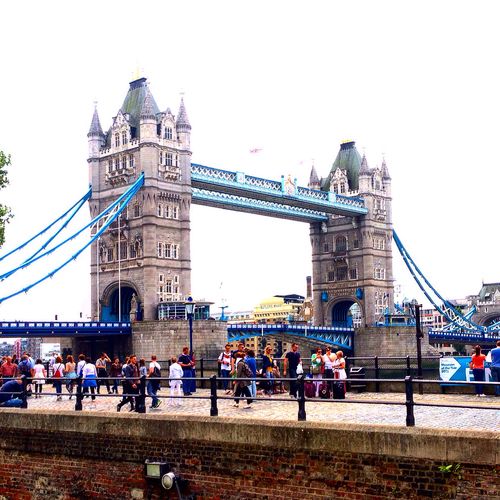 5. This bridge is not "London Bridge" 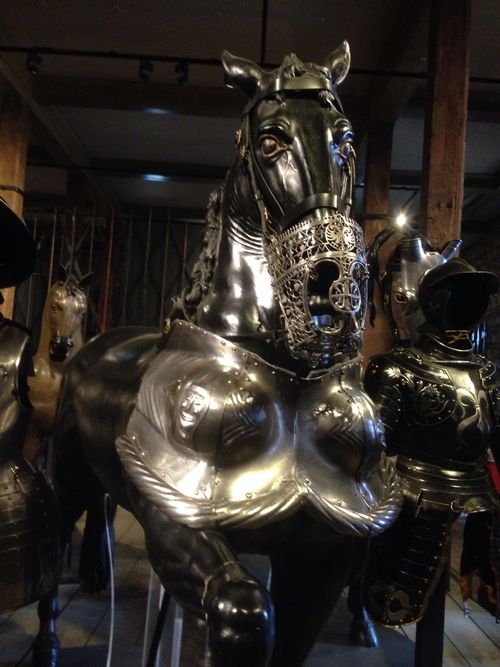 After my long slog through British military history it was time for some creative London cuisine. I jumped the overground to Shoreditch and found myself sitting next to two French food critics (or something as equally serious based on there ever so serious long conversation in French next to me) at Lyle's.

I would Lyle's is super modern with classic French comfort. I wanted to try everything on the menu, but there is only one of me so I went for the two most out there items. 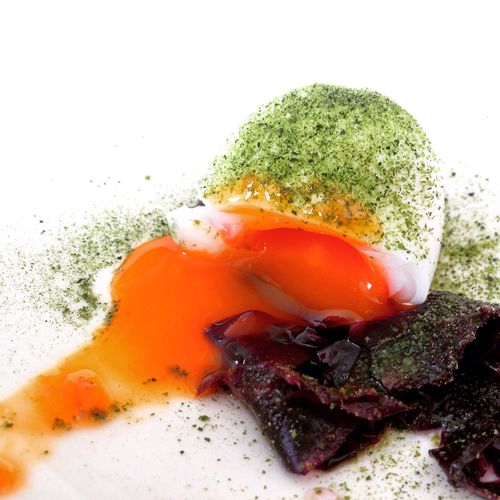 Gull's egg with seaweed – which tasted just like an egg with pickled seaweed. But the yolk in the egg was so orange! I was stunned by the natural color saturation, I just had to stop and admire it. 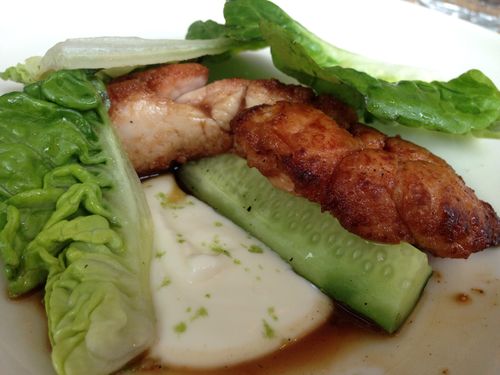 Then I ordered the lamb sweetbreads without even asking what organ I was to receive on my plate. I got brains. Very, very tasty lamb brains with yogurt, cucumber and lettuce. Then, sadly, I was full – but I had to get dessert. 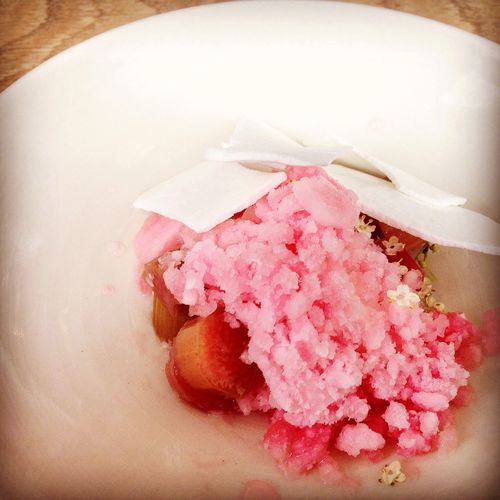 Raw goat cheese ice cream with rhubarb and elderberry. Beautiful and soaring with floral, acidic sour notes balanced out by just a barely sweetened ice cream with little to no goaty taste. 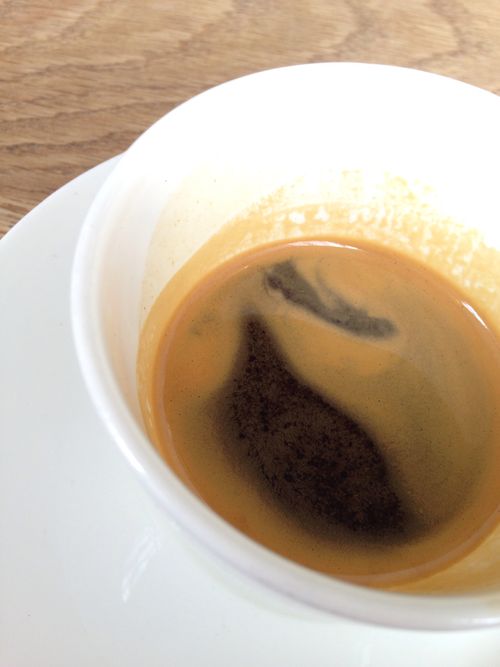 Last but not least I ordered an espresso and when they brought me a cup, I was told the name of the person who roasted the beans and that this blend had won an award for its selection of hand-picked beans. And here I thought I was just ordering coffee to finish my meal. My award winning cup of espresso tasted like coffee lemons. So bright it was a ballerina on my tongue. It was the most amazing espresso I've ever had. 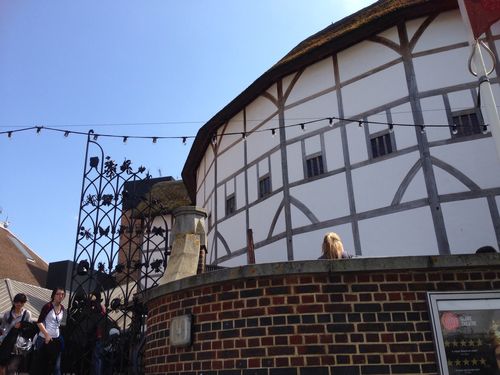 Refreshed I decided to skip attempt two on Westminster Abbey and head right for the Tate Modern/Globe Theater zone because it made more sense with my public transport options. On my walk from the underground to Shakespeare's Globe Theater I got asked for directions by a group of teenage girl French tourists, confirming that I have now perfected my "I know where I'm going" approach to walking around, even if I don't. The girls darted ahead and soon we all found the Thames river walk – a beautiful promenade along the churning brown river filled with strolling, jogging and biking Londoners and Tourists. London is very easy to navigate. And if you are not bi-ped impaired it is really easy to get around. Sadly though, everything is not accessible to those who need wheel assistance to get around. A moment of gratitude for the ADA and all of my currently functioning walking faculties. 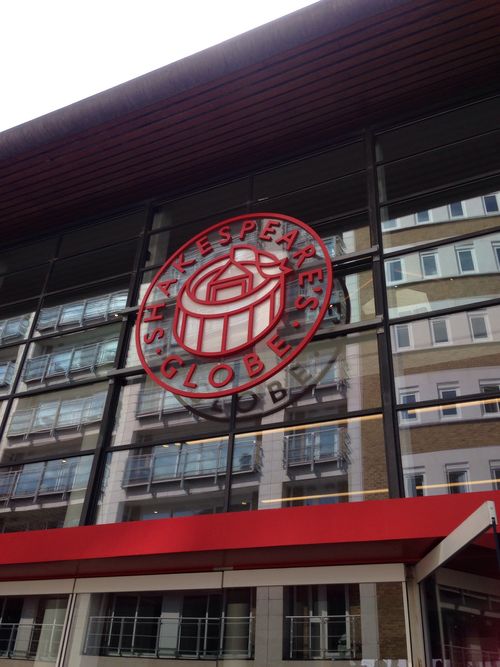 I reached The Globe and went to buy tickets for the evening Shakespeare play and found out the current play was the Merchant of Venice. I got really excited to see the play that I so hardcore analyzed in my Shakespeare immersion course in college- then the guy at the counter said it was sold out – four the next four days. ( insert sad horn sound here) "Come back at six and see if you can get cancellation tickets." He told me. As I now was obsessed with seeing a sold out show I couldn't leave the area and walked down to the Tate Modern to get in some good old modern art exposure to kill the next three hours. 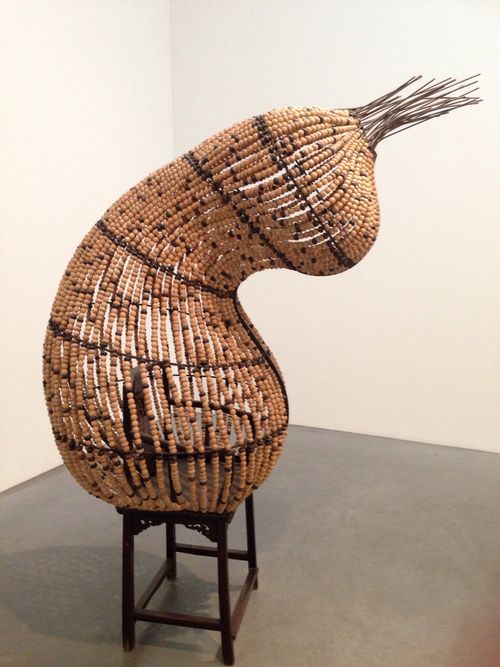 Three hours in a modern art museum was overly optimistic of me. I only made it through half the free exhibits and 1.5 hours before I had complete and utter museum fatigue. 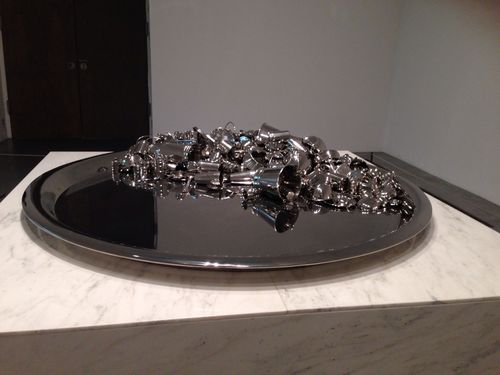 But I did enjoy seeing some Salvador Dali paintings close up – the abstract sculpture using common household items did me in. 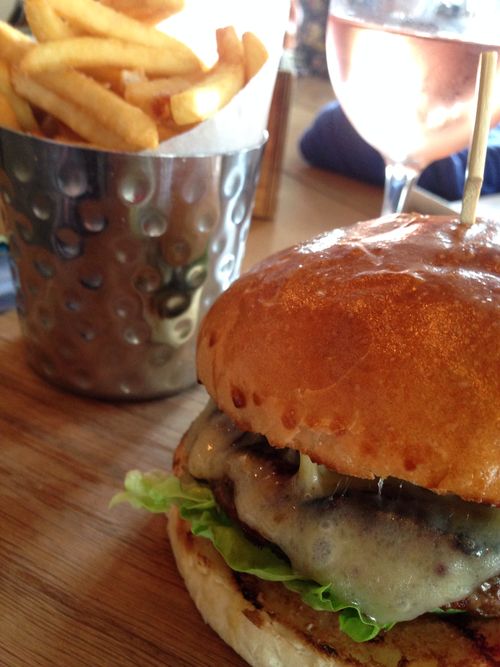 My feet hurt significantly from the miles I put on them – so it was time to sit down with my notebook and have a sip of wine and…it turns out…eat again. My tiny Lyle's meal wore right off after two hours of walking so I went to The Swan (a pub attached to the Globe) and ordered a burger. A real sink your teeth into it kinda food. It was glorious, and super messy and they only gave me this tiny cutting board to contain my mess. 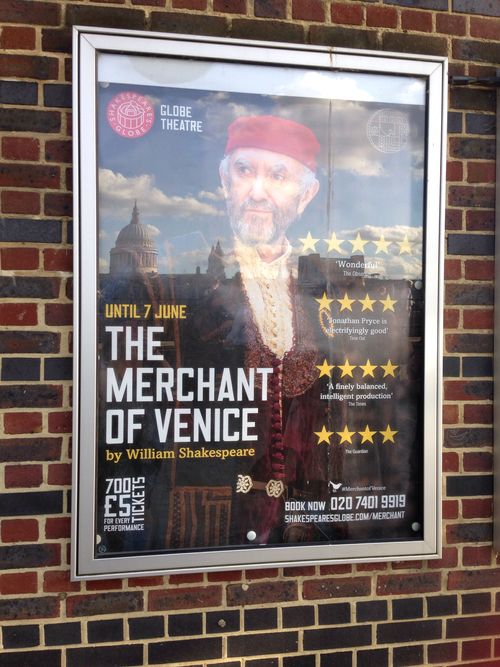 Then the restaurant got super busy and I couldn't pay my tab in time to queue up early for the cancellation tickets. Just as I was about to hang my head in sorrow and give-up as the queue was so long and I was at the back of it – the woman next to me said she was trying to sell just one obstructed view ticket, but no one seemed to want just one ticket. I bought it immediately and thanked the universe for looking out for me. 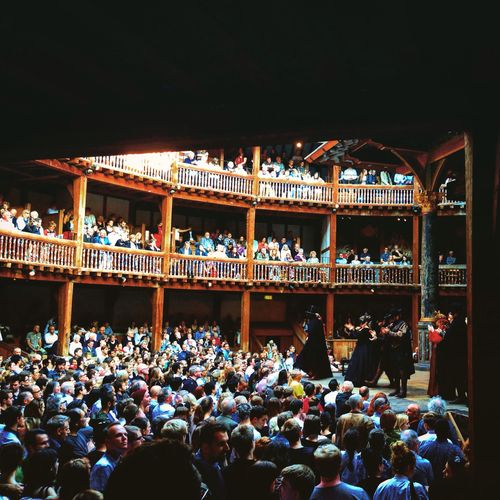 To see a Shakespeare play in the Globe is to see one of Sakespeare's plays in the venue intended. It was a memorable experience- if I lived in London I would become a member and be here all the time.
The play got out at 10:30 pm or 22:30 and I found myself foist into the late night London scene and on a very busy Friday night underground commute of the dolled up and drunk. I had gratitude for the always running trains that allowed for this weekend rush hour. And then went in search of pizza. 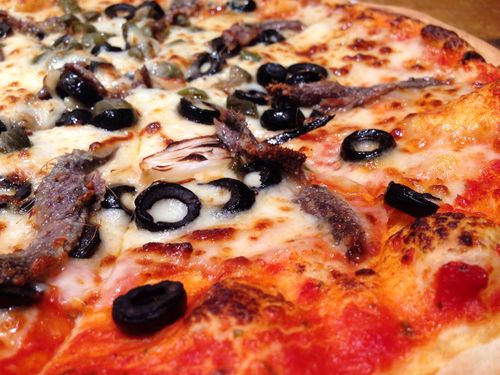