Last night on the way to Wildebeest we walked by a yoga studio. This morning we actually went. 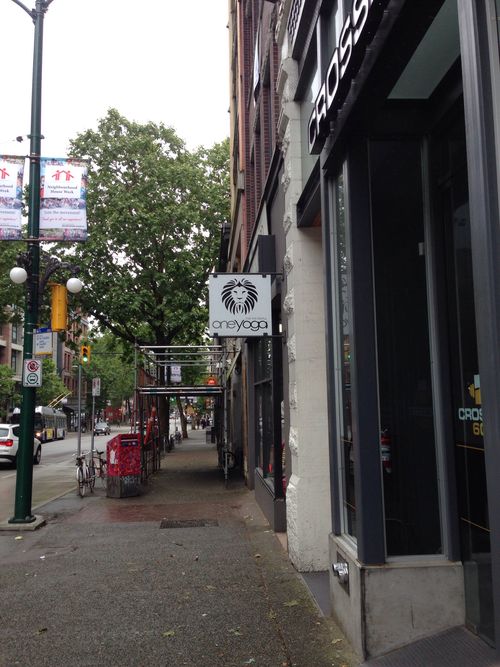 Completely blind to the type of yoga we were walking into but luckily having packed yoga pants as my PJs I went in with a sense of adventure and optimism. Much like I approach eating on these trips. 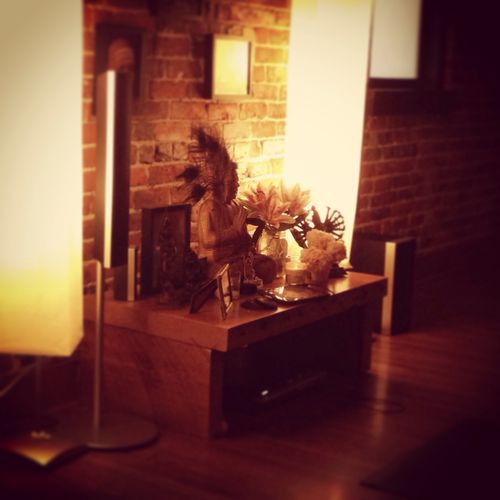 What we found was Dharma yoga – apparently a class highly requested by the bearded, tattooed, and highly flexible ladies and gentlemen we found ourselves surrounded by. It involved every pose I was ever told to avoid with instructions on how exactly one should never do them if you want avoid injury – and at the end a plug to be vegetarian. Other than that it was quite awesome to do yoga on a weekend getaway. 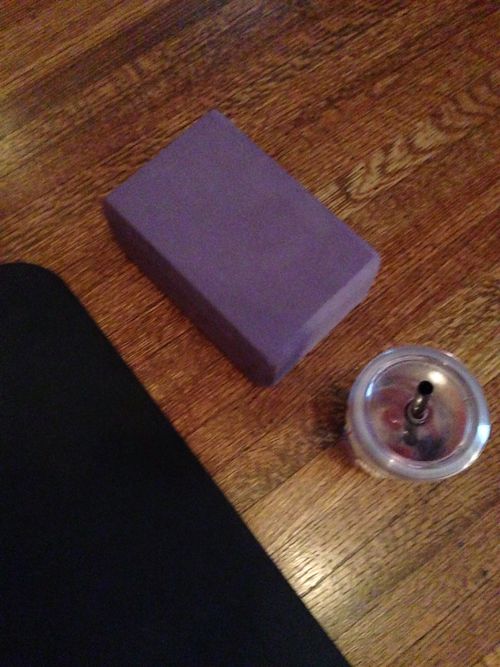 Meanwhile Mischell stayed back at the ranch to breakfast, get in her requisite 12 hours of sleep and research real Japanese ramen locations. She found one that makes their own noodles with flour shipped in from Japan and cooks their broth for three days before serving. 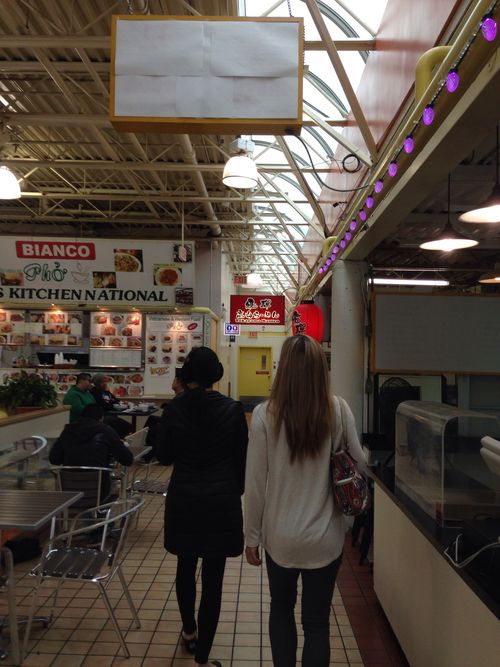 We found it in the back corner of a strip mall featuring luggage, bad wines, knick knacks and a man who insisted we move to Canada. 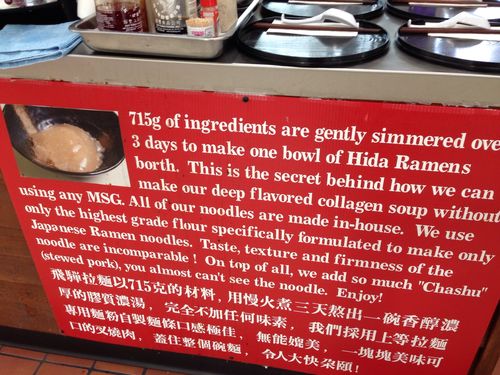 Surroundings aside they are serious about their ramen. And it was good. I enjoyed the spicy miso, Erika the miso and Mischell the shoyu flavor. The noodles were bright yellow and the broth a thick luxurious viscous texture – the hardest part was figuring out how to eat the large slices of pork on top with chopsticks. 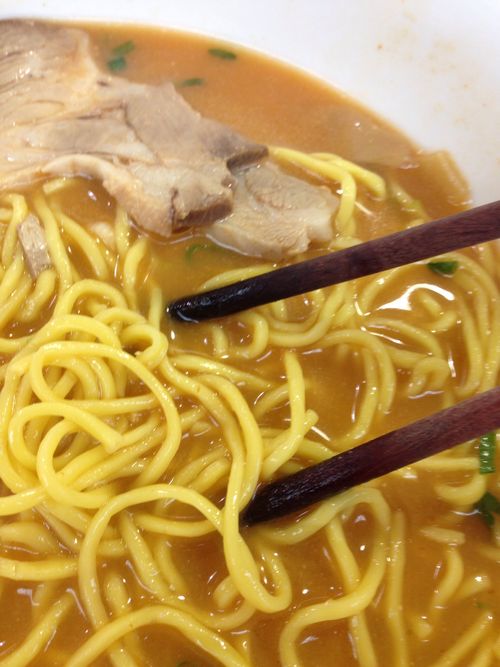 I figured it out but was unable to eat all my noodles. 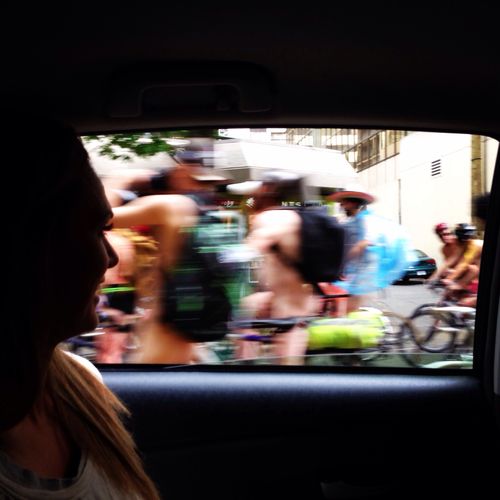 On our way to ramen we passed or were passed by (depending on perspective) a large crowd of completely naked cyclists. We were in a cab because it was rainy and cold – one can only imagine that some of the participants of this flasher mob barreling down Robson street in downtown Vancouver were a little bit discouraged by the weather. 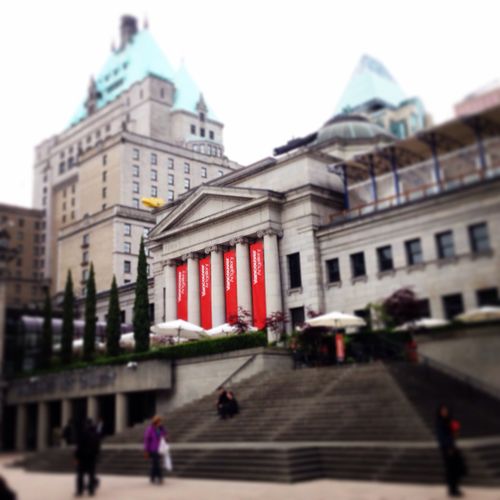 We walked back to our hotel through the drissle stopping at various stores and the art museum square to hear the interesting sounds emanating from the Eastern European culture festival. 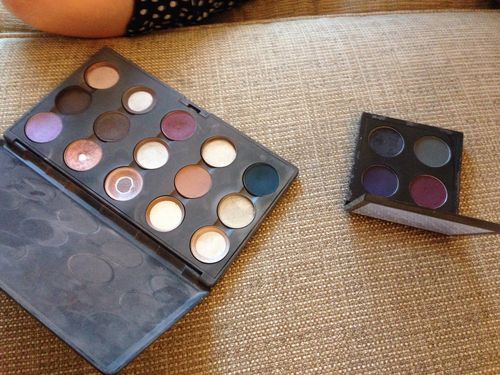 Tired and unable to find an establishment not filled with smell of man sweat, beer and World Cup watching we retired to the room for make-up, wine drinking and a rousing sing-a-long of everyone's favorite South Park jingle "Blame Canada." A very close analysis of Brittany Spears dance performances pre and post marriage children and bad choices also ensued. I learned many things. 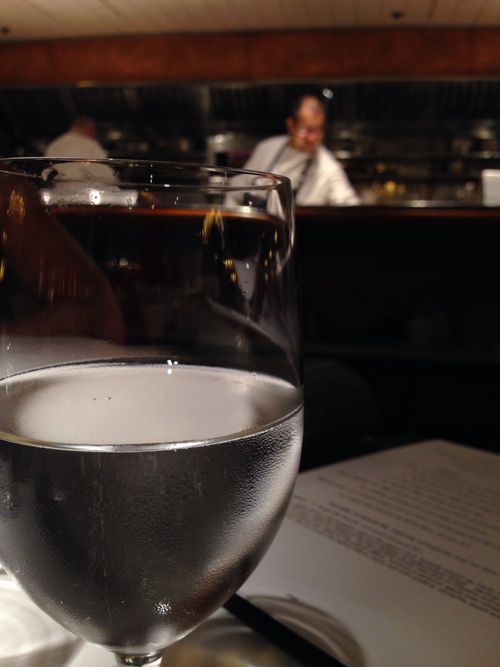 Then we marched our well done up selves through the rain to Blue Water Cafe and Raw Bar for seafood extravaganza. We arrived a little bedraggled to find that we were glad we dressed up for the fancy white table clothed atmosphere. 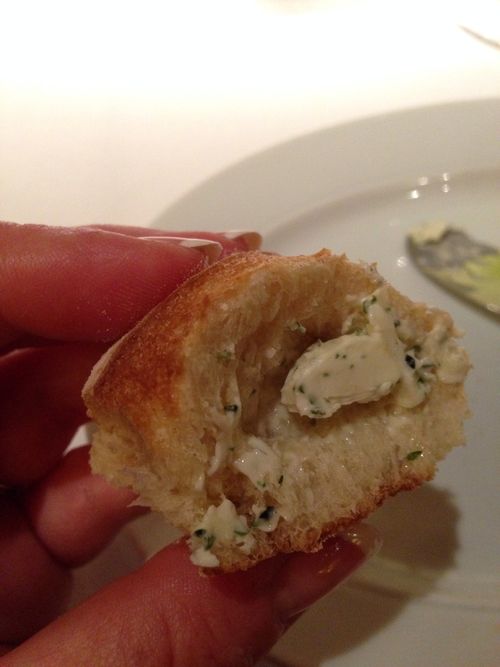 The menu was large and filled with options and the wine list a book with a table of contents. We nibbled on some luxurious seaweed butter and rolls as we decided our plan of action. 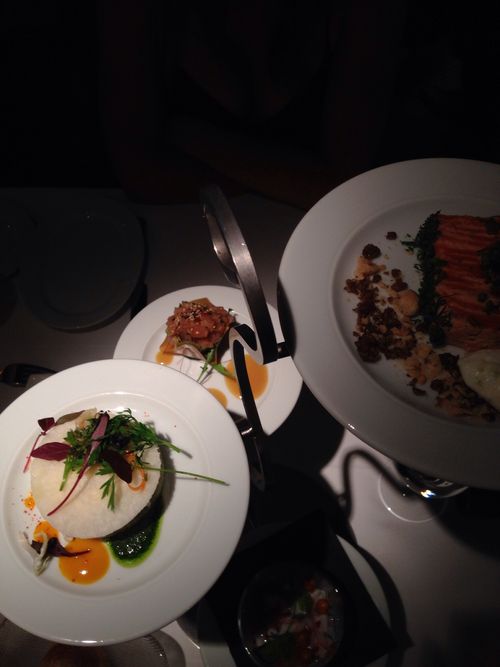 Tower of tasting it was – with a side of jellyfish. 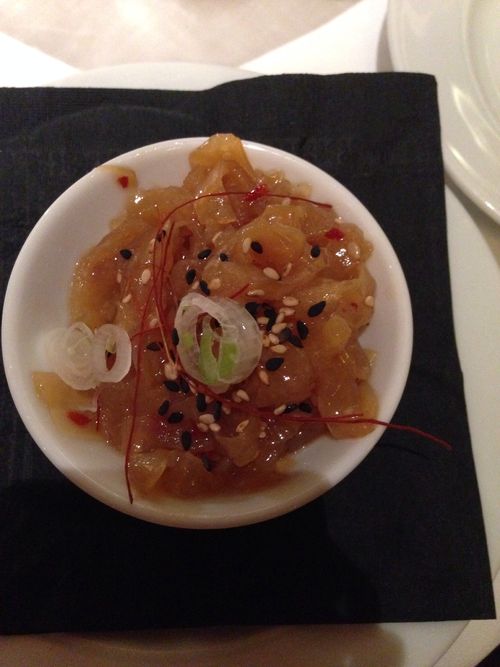 Blue Water Cafe is proudly rated as sustainable seafood by Ocean Wise, a program promoted by those that built the Vancouver Aquarium. Part of their rating comes from the fact that they serve things sometimes ignored by high-end seafood places – things like jellyfish, for example. Which tasted exactly like a seaweed salad dressed in sesame and rice vinegar – right down to the texture.
Now back to seafood tasting tower. 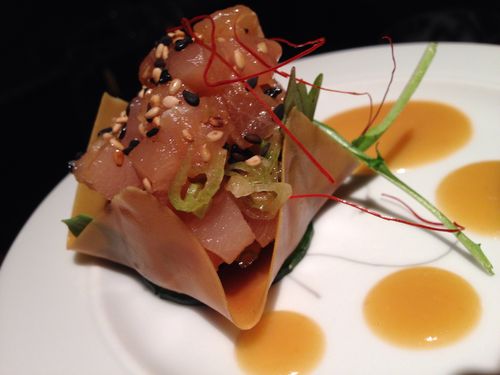 First up was the tuna tartare. Artistically plated it was quite delectable but very unsurprising. Nice chunks of tuna in a sesame oil and soy sauce mixture. We followed it with the smoked salmon terrine. This was a unique little slice of lightly smoked salmon made into a little loaf with some type of delicious fatty substance (likely a reduction of its own fat) that glided on the tongue in such a way as the usual sharpness of smoked salmon was wisked away. 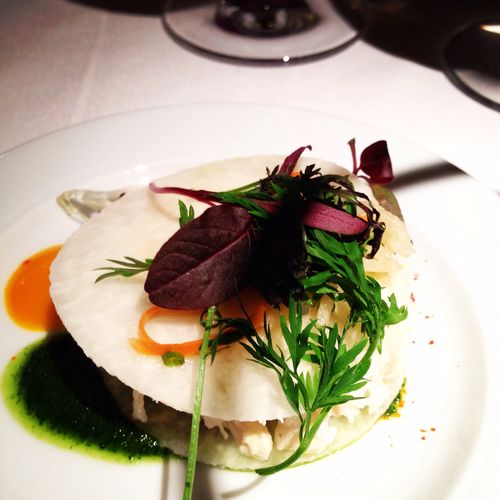 Then there was the crab. Looking at this little piece of food art you think it is some type of tortilla. It was actually vegetable – either jicama or kohlrabi – we couldn't quite tell. It was a tasty morsel either way. 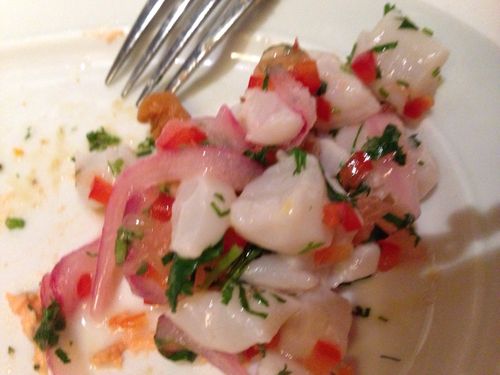 Finally we reached the scallop ceviche – one word – heaven. Perfectly marinated in lemon and herbs I should have just ordered another serving of it to eat all alone and went home happy. Instead we got our main courses – which although good paled in comparison to the tower of flavor we ate first. 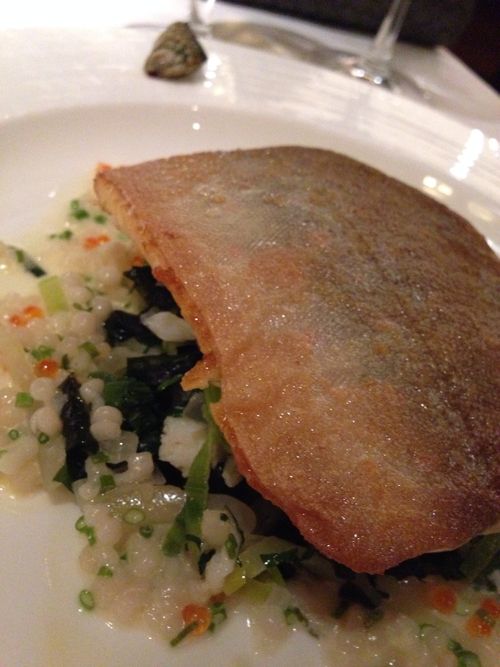 The best part of my dish – the char – was the crispy skin. Erika ordered the halibut which came with two gooseneck barnacles. 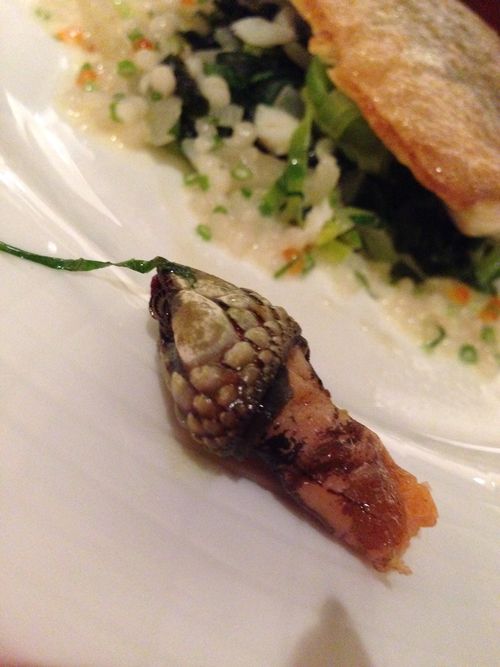 She gave one to me. It tasted like chewy seawater and was not that photogenic. I really tried though. 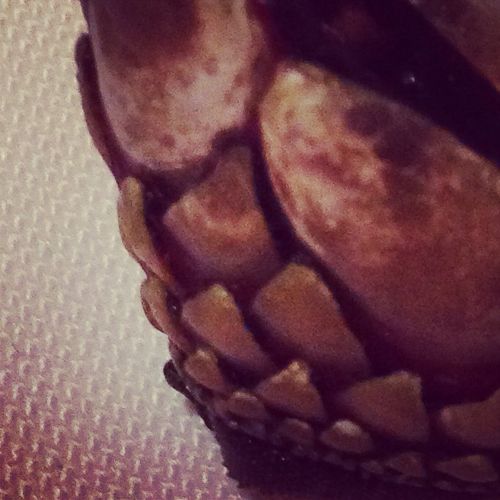 We finished the meal with a series of coffee drinks. 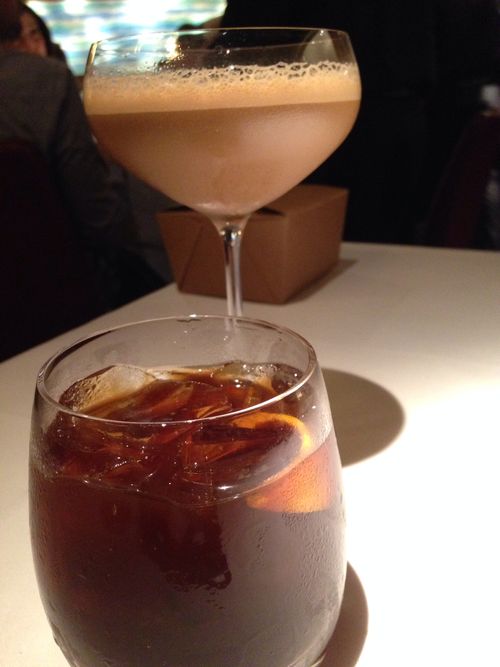 No real room for dessert – the liquid form was quite perfect and brilliant on the part of the restaurant in the many different options. Erika's was the prettiest. 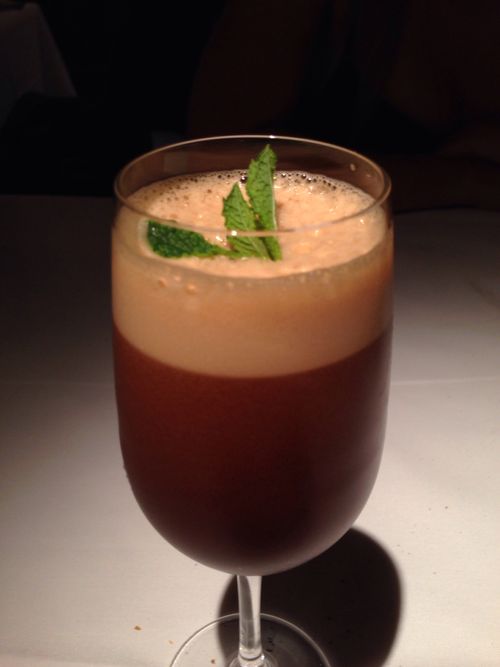 Then we got our very large bill and went home to the hotel where we proceeded to watch more YouTube until we passed out. A good full day in Vancouver.