Before coming to Iceland I did research on the restaurants of Reykjavik – the guidebooks and the internets all pointed to one restaurant as the place for foodies and those in search of flavor and foraged experiences – Dill. The simply named restaurant has anything but a simple philosophy at work behind it – its progenitor trained under the likes of Noma's mastermind and is committed to the use of all Icelandic produced and sourced ingredients. 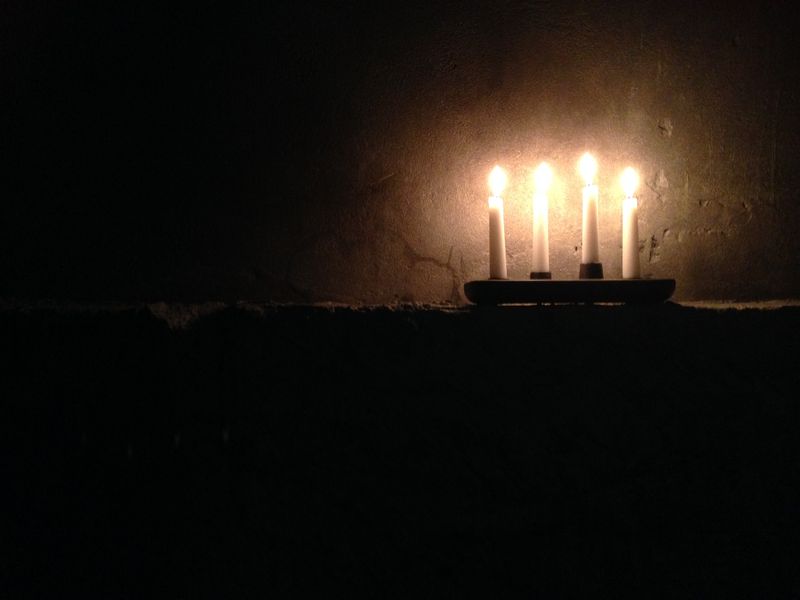 As an added complication to my desire to eat at Dill I didn't think to make reservations before arriving in Iceland for this tiny little 23 seat restaurant.  It also did not appear to be open any other of the days posted on its door (Wed – Sat 19:00 to close).  Jessica spotted movement on Saturday morning and let me know that she saw them open.  As she was intent on practicing her dance routine and public hot springing it – it was a perfect time for me to go solo into food adventure land, and use my Paprika Angel superpower of getting in the best restaurant in any city of the world I visit with no reservation.

Smug with belief in my superpower I left the hotel and walked right into Dill just minutes after opening to ask "Do you have room for just 1 with no reservation?"  The bearded man looked me up and down and said without hesitation, "No, we do not."  This simple no was not going to stop me so I asked another way, "It really is just me. Can you take my name?  I'll come back later. I'm sorry I know your website was not taking reservations until next week again."   He looked me up and down again, "We are just 23 seats, come back at 9pm, that is in two hours, no guarentees, but we may be able to seat you then."  I could have hugged him for the opening.  The test was on – I promised him I would come back and left to explore the early hours of the Iceland Airwaves music festival. 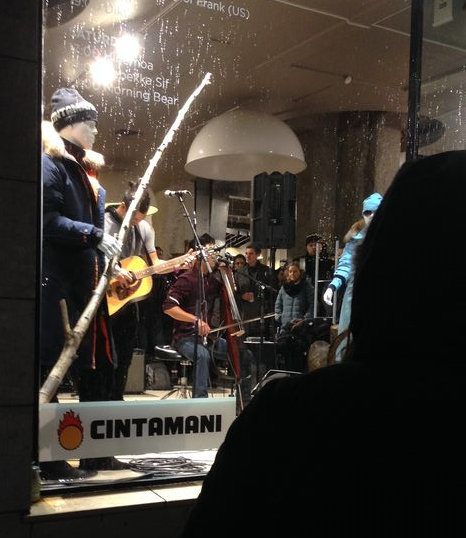 Not even a block away I encountered my first off-venue show in the window of a clothing store.  Morning Bear was playing his beautiful melodic and eerie loss ridden songs to the people on the sidewalk – the speakers amplifying it for all of Bankastraeti street.  Then it started to pour rain – I needed an indoor venue.   I walked to find Idno, a venue that had evaded me for the last couple of days. 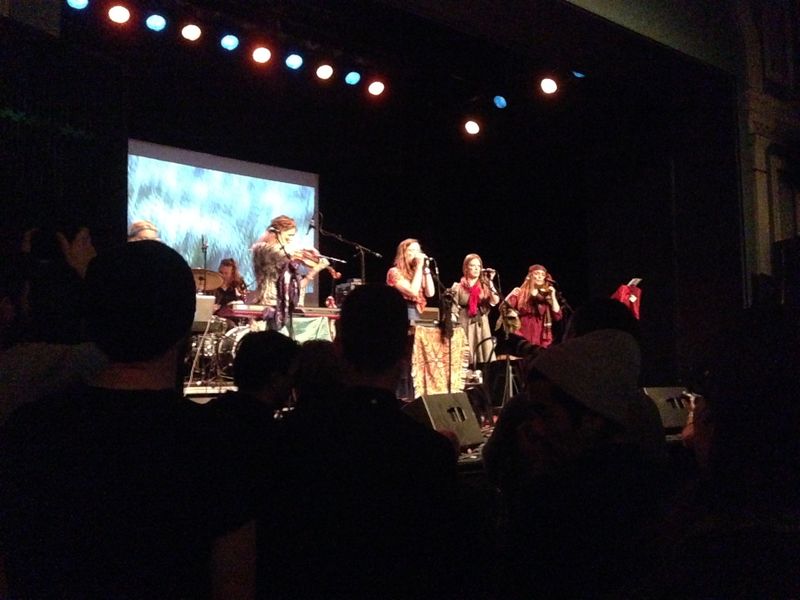 I found it filled with the sounds of Gruska Babuska, an all female multi-media, folk explosion, instrumentation circus of loveliness.  Bjork recently has "dropped by" and played in their shows according to the official Iceland Airwaves app.  As I was trying to get a sense of the music these two tall and loud men came into the theater and started talking over the music right behind me – unsure if it was cool or not I turned around and said "Excuse me, but some people are trying to listen to these beautiful women play beautiful music."  They looked surprised to be called out their behavior but they left to go talk in the bar. 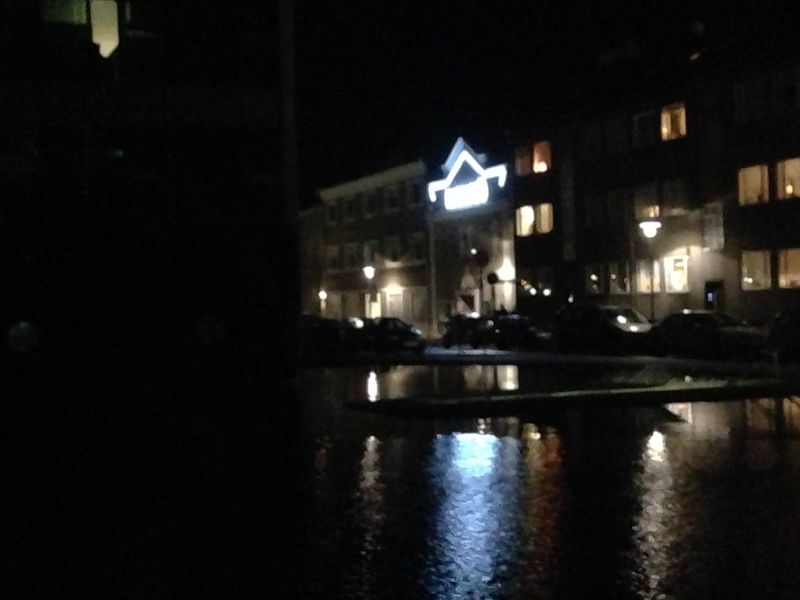 After the very quick set by the babuskas, I ventured down the street to yet another venue I had yet to see.  Tjarnarbio, where a band called Epic Rain was playing.  Epic Rain just had a nice sound to it so I thought it worth the extra walk and risk.  It was a good risk as I found a combination of Tom Waits meets Nick Cave meets fun and interesting poetry with lots of boxes on stage that make weird sounds along with string instruments. 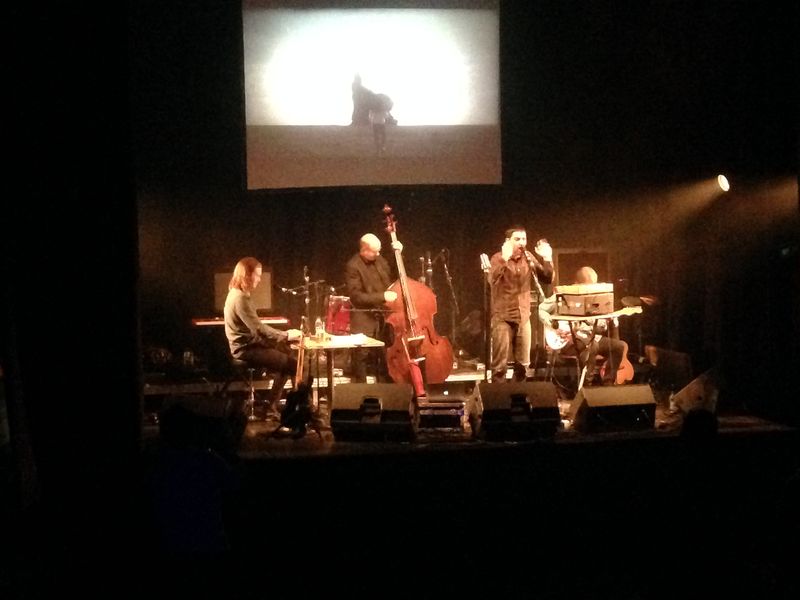 It was fun and I was watching the clock knowing I needed to get back to Dill before 9pm to show my commitment to the cause.  I made it back with 8 minutes to 21:00 still on the clock. The bearded man eventually made his way over to me to say, "We will likely have a table for you in just a few minutes."  Victory! 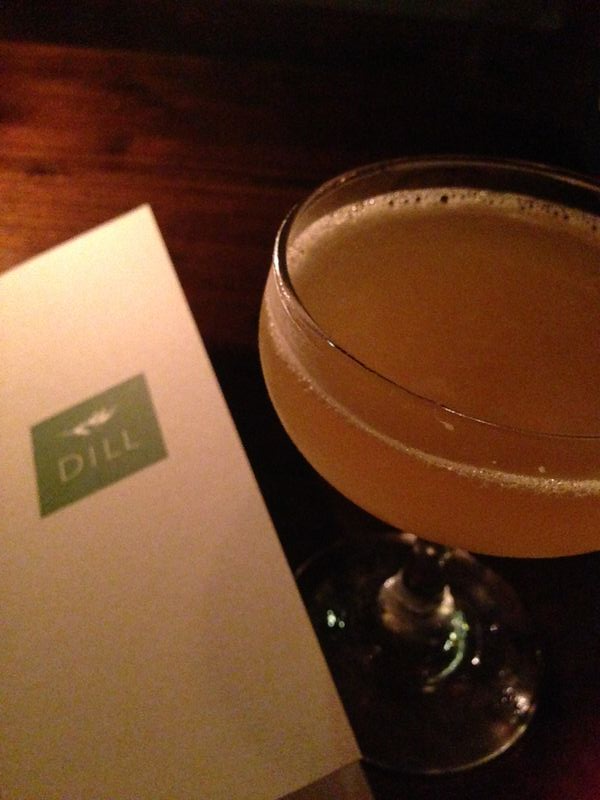 I was seated and then my adventure began.  Thank goodness the table had a real candle on it so that I could take all the amazing flame lit photos to come in this blog post. 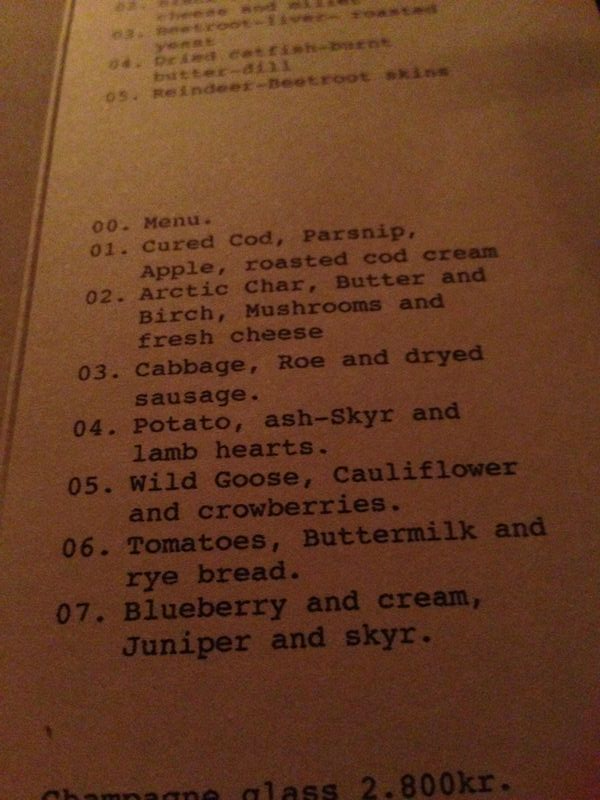 The Dill menu is set and starts with "snacks" which I relabeled one-bite-wonders. This magical bite was grilled carrot with dried seaweed. I admit I was a little confused by the plating and wondered if there was something else on the plate I was supposed to eat.  It was luckily swooped away quite fast so I didn't have to ponder too long if the little bite of carrot was truly all there was. 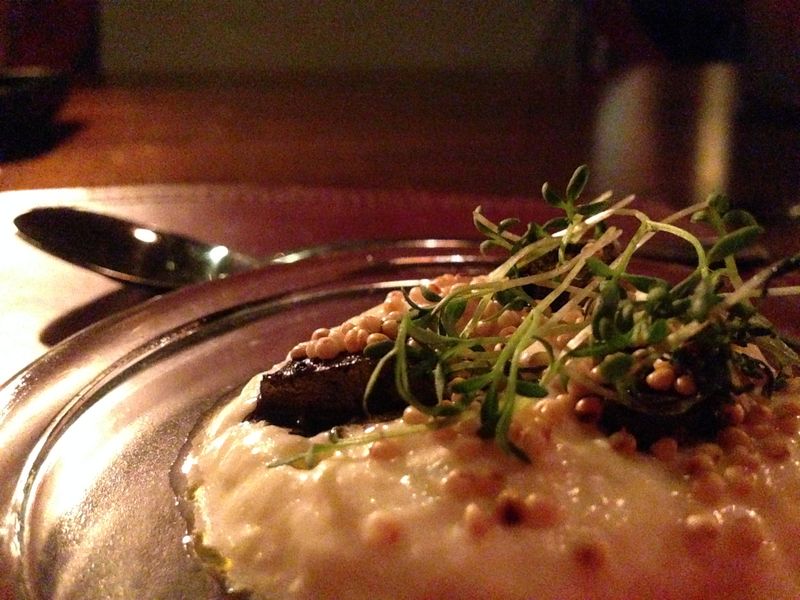 This second snack was black radish with crispy millet in a mixture of homemade cream cheese.  It had this lovely crunch floating in the freshest cream cheese I've ever eaten – I didn't know dairy could dance on the tongue, but it can.  The toasted millet was a super fun texture as it crunched on my teeth. 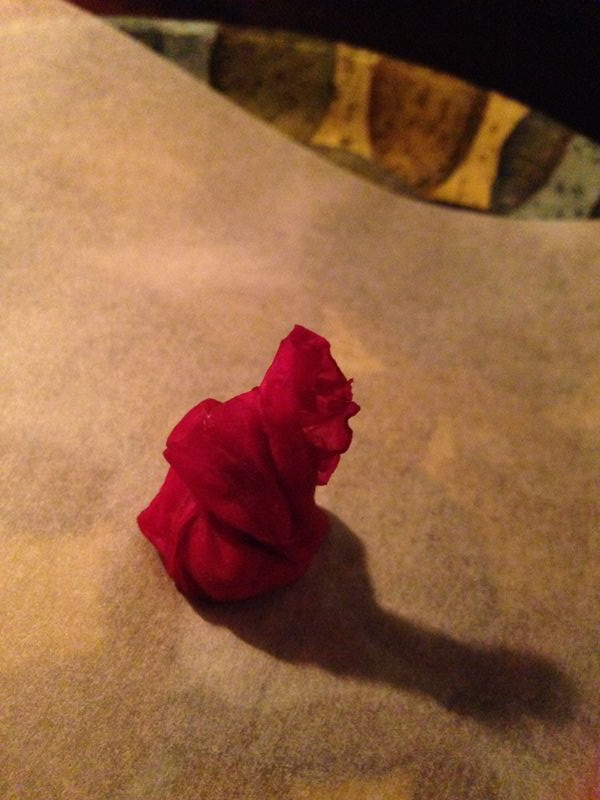 The next snack was beetroot wrapped liver.  This little odd looking pocket tasted like a version of a peanut butter and jelly with a beet-like finish. This pile of dust was dried catfish with burnt butter.  In comparison to my birch bark chewing experience of two days ago this was darn right tasty.  Dried fish is way better when  it is powdered up like this catfish was served.  It had a lot of fish flavor, but none of the eating a tree texture – the burnt butter was the extra bit of kick and fat to pull it all together. 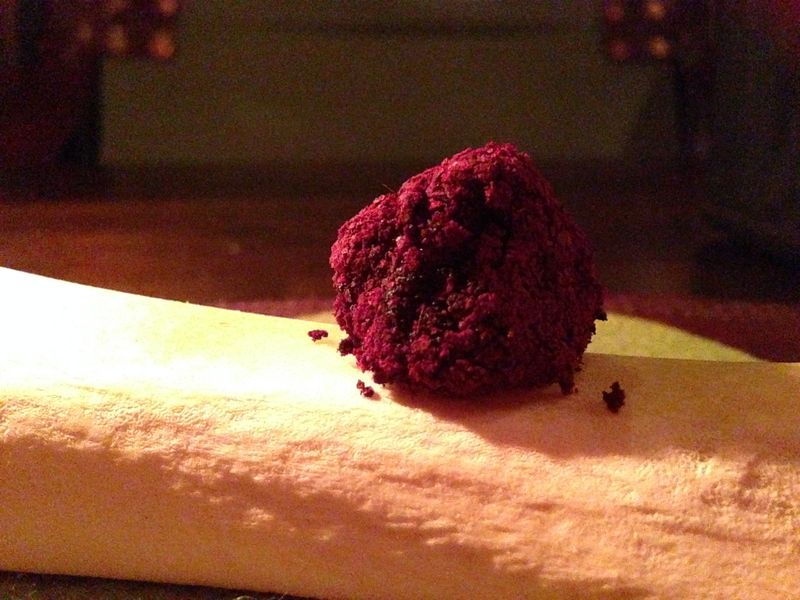 The last snack of the warm-up round of tastings was this little globule of reindeer tartar with beetskins.  The beet skins really took over the reindeer flavor but there was a lovely fluff at the end that you could tell was venison. 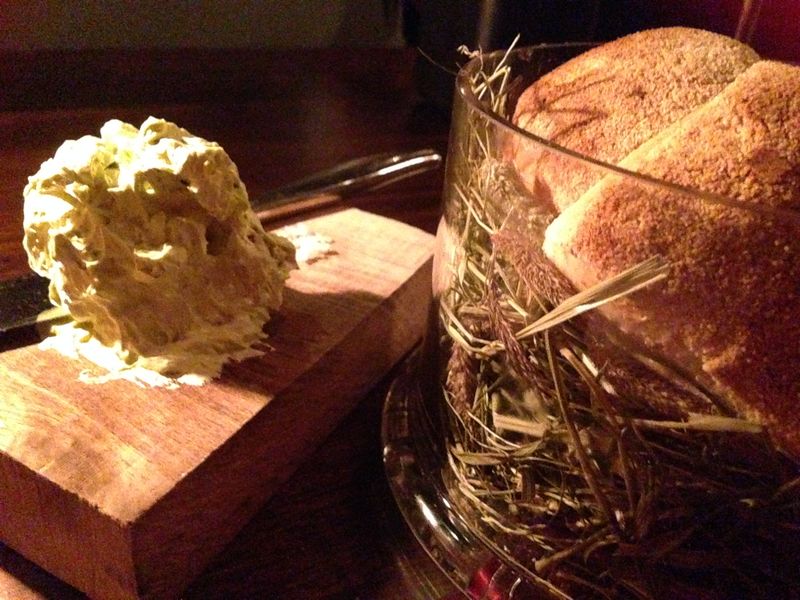 In between the snacks and the seven course tasting menu was a bread course.  The bread was served in a bowl of grass with this gigantic dallup of butter.  The butter was pickle butter. So good. Hands down the best butter I have ever eaten because of the pickles in it.   Who knew?  pickle butter. 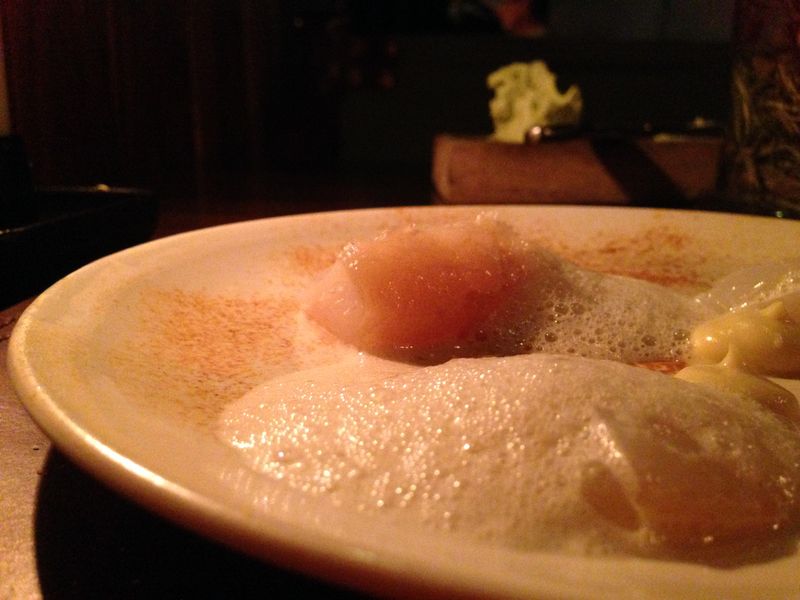 The first course.   Cod with apple and rich cod foam.  This was an ocean flavor burst in my mouth with the complement of apple and salty cream.  It paired perfectly with the dry german reisling (just as it was supposed to) the apple spoke to the apple and the dry to the salty fish.  The dish also deflated slightly before my eyes because of the foam element – but I think this photo captured it quite well. The second course.  Artic char with radishes, mushroom and turnip puree.  I never got to ask where the arctic char was sourced from but it was so tender, so fresh, so sweet but not sticky sweet – singing so perfectly with the mushroom and parsnip. The third course.   Cabbage with salmon roe and dried sausage sprinkles.  The tiny cabbage head came from Dill's garden somewhere nearby and was so tender.   The salty combo of flavorings over the top were just a party in the mouth both for flavor and for mouth feel.  It wins my favorite cabbage dish of all time.  It was paired with an all natural wine (naturally occuring yeast, no preservatives, no filtering).  Here is a shot of its cloudy wonder. 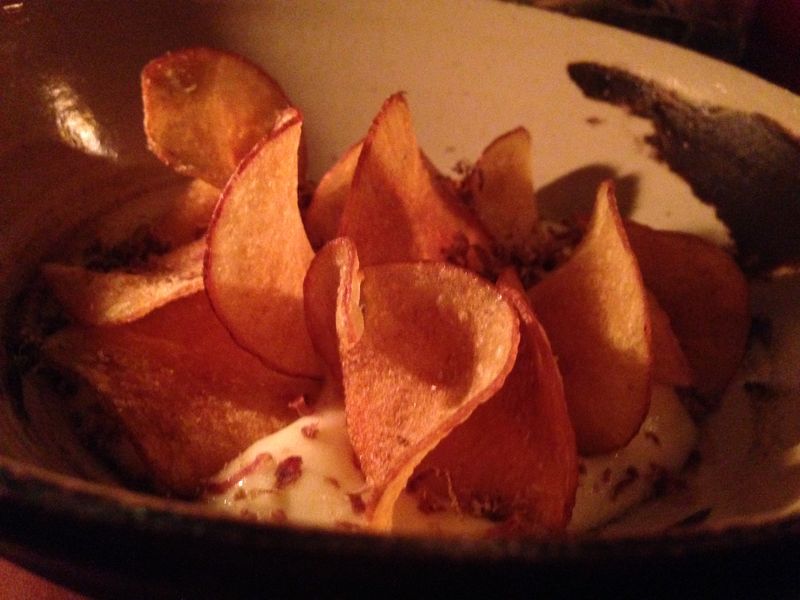 The fourth course.  Potato chips – yes seriously potato chips on top of a pile of potatoes, skyr, and salted dehydrated lamb heart.  It was like a high end gourmet's take on bar food – the only bummer was the lamb heart flavor was buried a little with all the strong yogurt action going on with the skyr.  But it was definitely an experience. 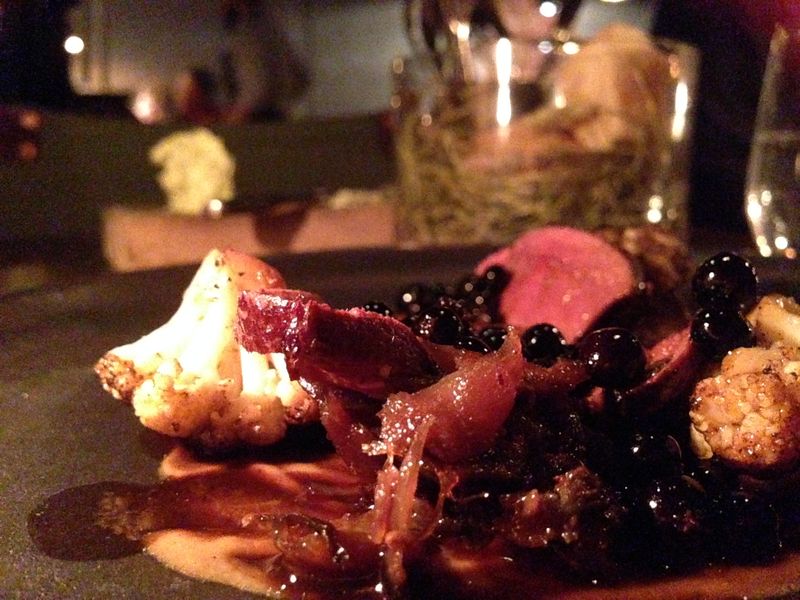 The fifth course.  Wild goose with crowberries and cauliflower.   This was my favorite course because of the lovely texture of the goose and the taste its meat took on with the crowberry marinading it.  Crowberries are much like north american chokecherries or gooseberries – not exactly the same and quite bitter – but much like their counterparts they marinate a meat well.  The goose almost tasted like lamb it was so rich.  This was paired with a lovely red wine from Italy that almost tasted like chocolate.  I completely failed to note the name or take a picture of the label to remember what it was other than tasty. 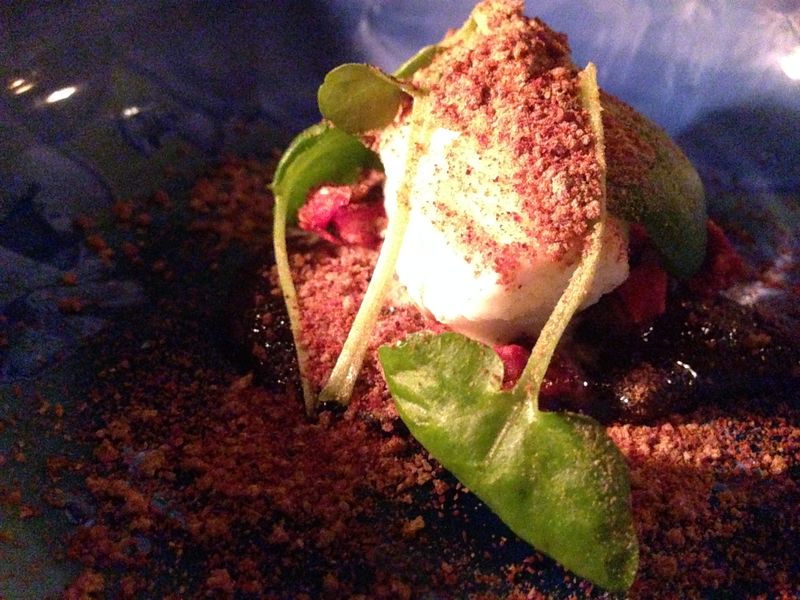 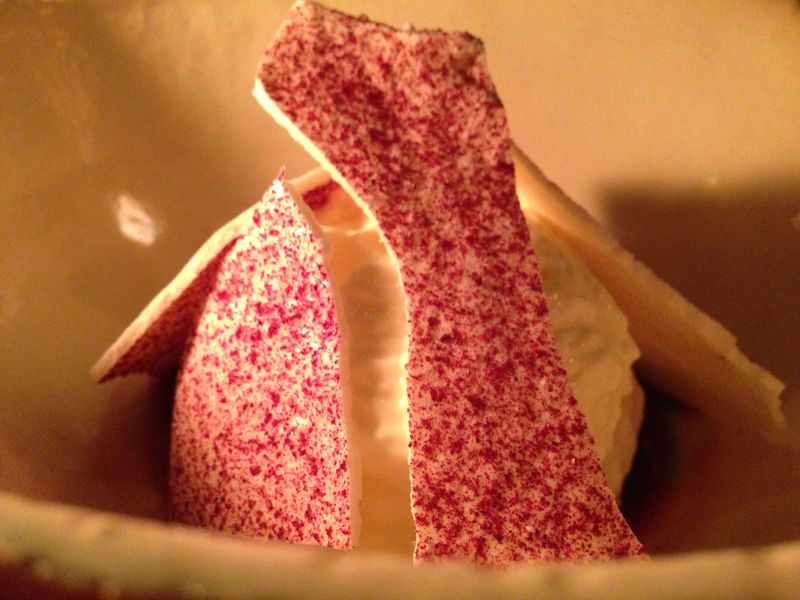 The seventh course – dessert.  Blueberry Skyr Mousse – so light and so blueberry, paired with champagne.  My notes from the evening say "so good, but I've lost the ability to describe things now." 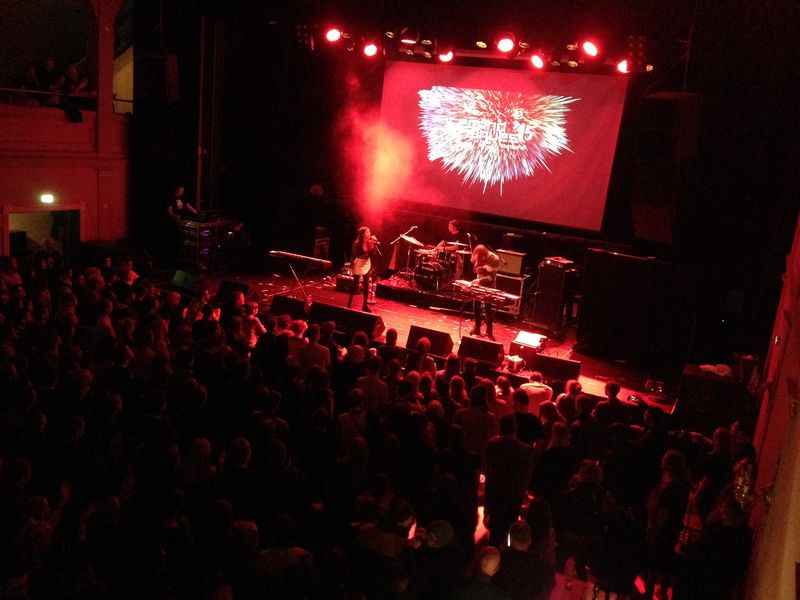 So full of food and drink I practically waddled across the street to the Gamla Bio Iceland Airwaves venue to catch a couple more artists before ending the night.   I also had to walk/stand off the food and alcohol.  I caught Hundred Waters, a beautiful soulful singer accompanied by electronic beats, and Kiriyama Family, a festival of synthesizers on stage.  I chatted with a couple guys from Brooklyn who were two year veterans of the festival who disagreed with all of my learning experiences from going to see shows over the course of the last four days, which was funny because it was my personal experience and thus not up for debate.

When I made it back to the hotel it was way past midnight and I had no ability to do anything but fall on my bed and sleep the silent sleep of the completely exhausted. 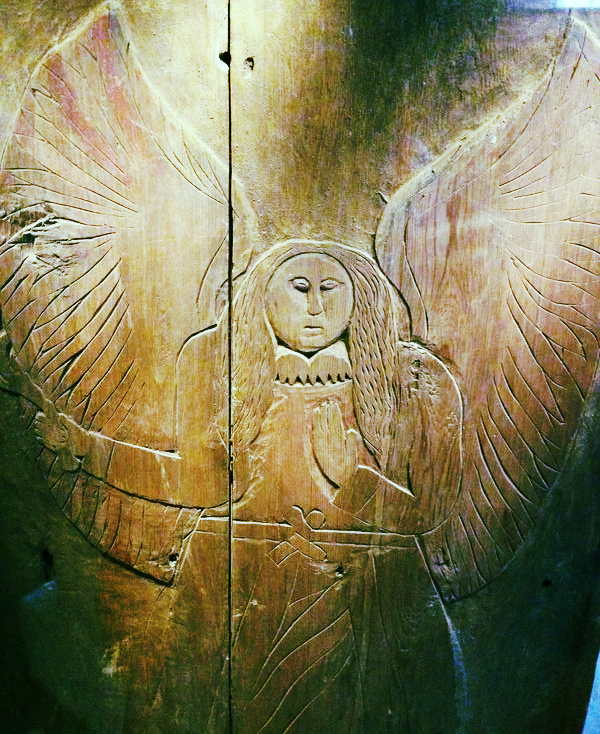