The streets of Charleston were dead this fine Saturday morning as the populace dealt with the traffic stoppage caused by the Charleston Marathon.  I meant to tell my sister that the maraton was happening but up until this morning when I woke-up I wasn't exactly sure what was going on.  The news was helpful – so I texted a warning and got a "gawd no" in reply. Success, but it meant I'd be alone again for at least a half day.  Luckily, the High Cotton Club restaurant, right next door to my Bluegreen Vacations resort was hosting a bluegrass brunch. 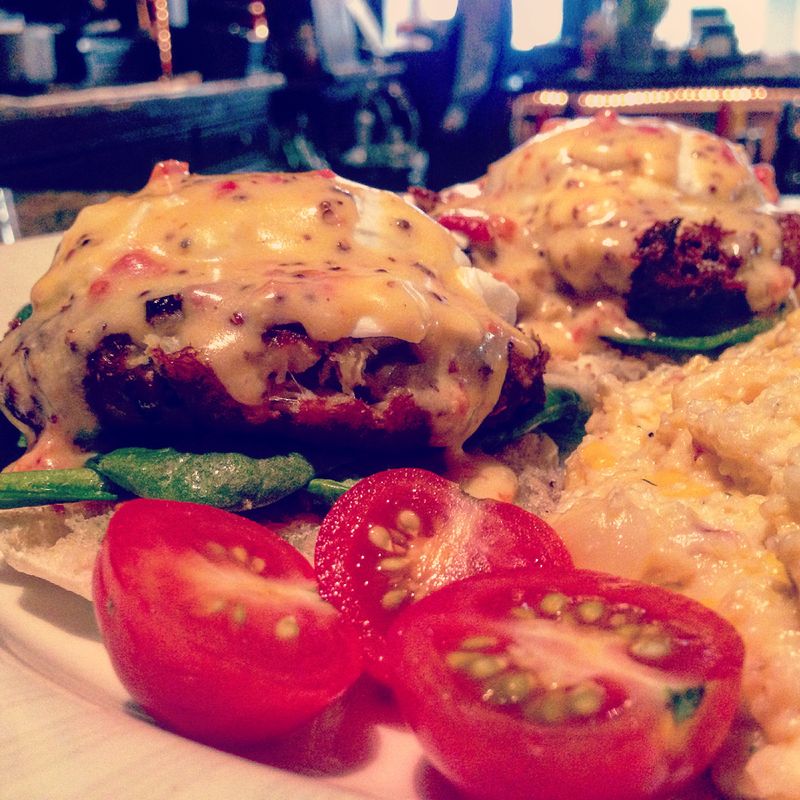 I annied up to the bar and took a stealth picture of the band. Then I ordered some of these lovely bacon bourban glazed doughnut holes to pass the time. 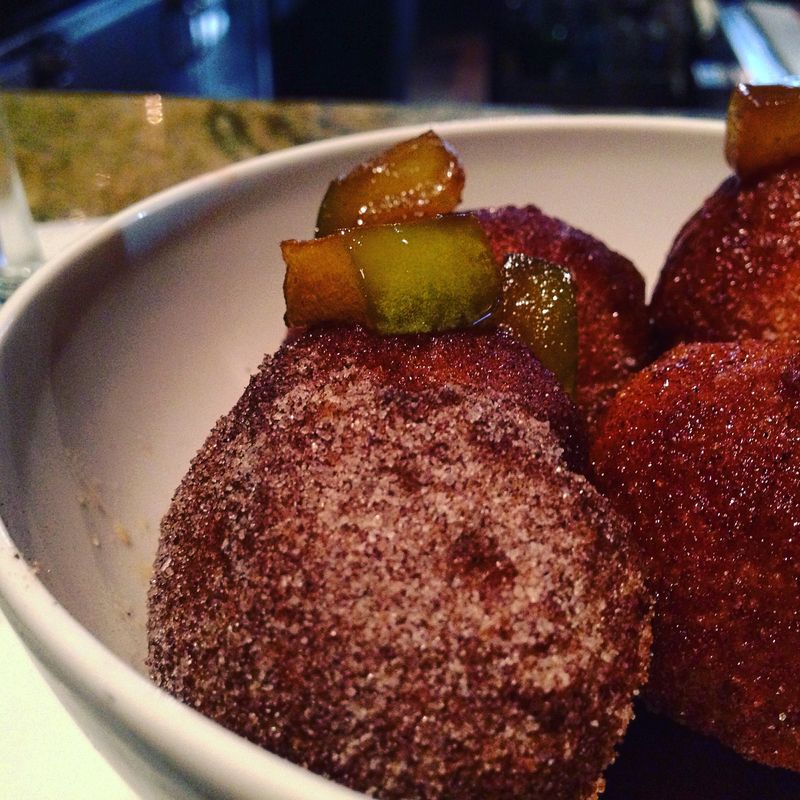 These little babies were not for the faint of heart – I just ate one and took the rest in a to go box for my niece and sister.  The combination of bacony lard mixed with bourban and cinnamon sugar was heavenly and heavy.  The doughtnuts themselves were of the "old school" variety like grandma used to make so the dough inside was actually fluffy and your teeth didn't get stuck in it like some of the modern donuts out there. 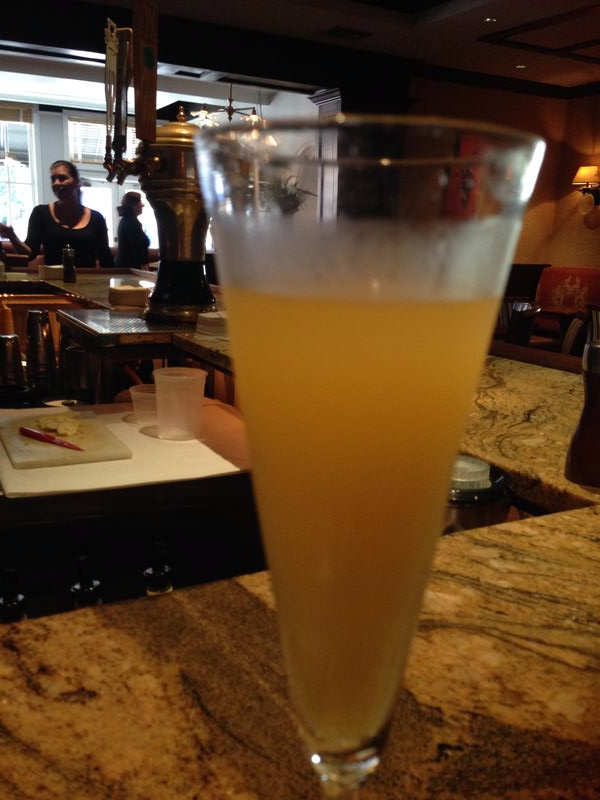 I passed the time waiting for my crab cake benedict by drinking a bellini.  When I asked "Do you serve bellinis?" and the server said "of course" I was a happy camper.  The crab cake benedict you see above was made with big lumps of crab and had the perfect crispness in its crust signalling to me that they were pan fried in a wonderfully large amount of butter.  I wasted most of the food on that plate because it was so rich – I managed to eat both of the crab cakes, one egg and all of the spinach.  I succeeded in getting two bites of the grits down and admitted complete and utter defeat. Still waiting for my sister and family to arrive I found out that The Old Exchange Building was just down the street so I went for a little historic excursion.  The outside is currently getting a facelift so it was not that photogenic on this fine day.  But I arrived just in time for a guided tour of the "dungeon." It is actually just the basement, but many low level criminals and American revolutionaries were held here during the fight for independance from the British – including the guy who made the Don't Tread on Me flag and a couple signers of the Declaration of Independance.  The conditions of the "dungeon" or "provost" as they called it at the time, were not good, wet, dirty, and disease filled. As a tourist we had to look at the mannequins, smell the musty basement and imagine as the costumed tour guide filled us in on the history. 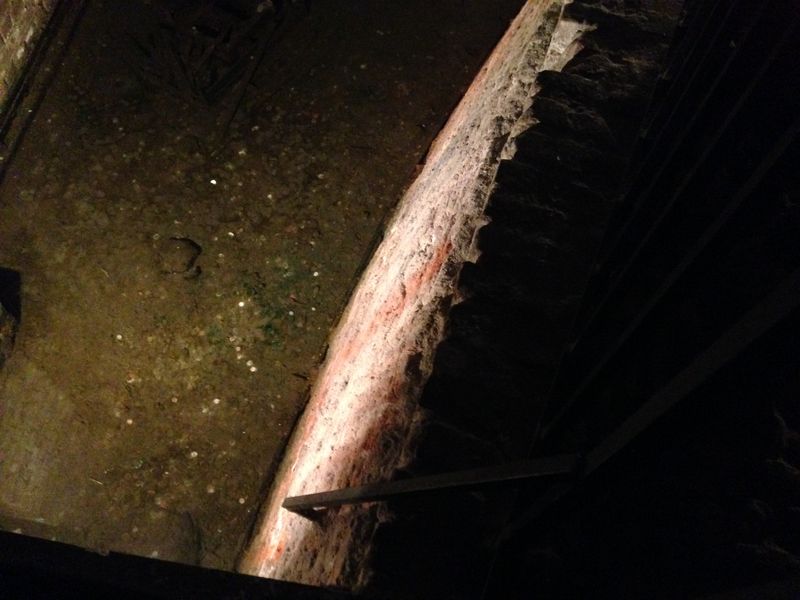 The Exchange Building is built on the site of the old half-moon battery.  What that means it was built directly on top of the main wall of the old city that used to be on the water. This is a picture, from the basement, looking down on that original wall of the half-moon battery.   The water is ground water, not sea water – the coastline has been filled in over the years so it is no longer on the water (obviously).  Here is a historical diagram of what I am talking about. 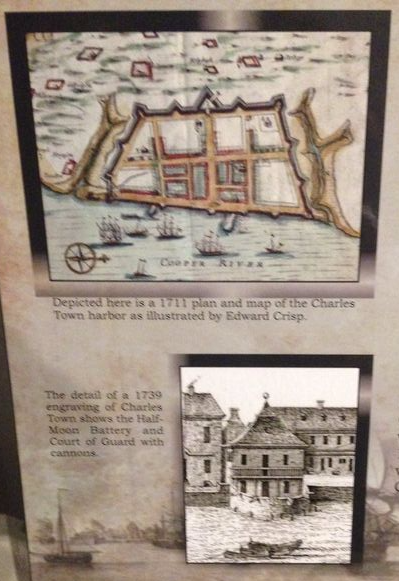 I learned that East Bay street is called East Bay because it, in fact, used to be directly on the water.  Charleston was a walled and fortified city because of pirates and possible invasion from the Spanish and French.  By the time they built the Exchange Building the fortifications were no longer needed and the city was expanding to become a major port of trade and they were filling in the bay pushing land further out to build on. 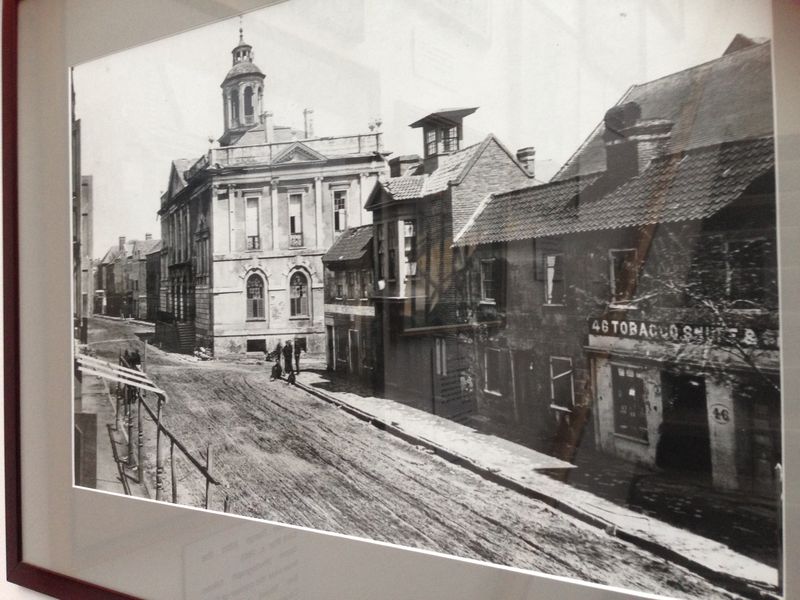 The Old Exchange building is filled with photos and drawings of the exchange building throughout time – there are also tidbits of revolutionary war period history here and there. Here is the ballroom that was used to entertain President Washington on his visit to Charleston.  To the right of the picture is a display that tells you play by play exactly every single thing that Washington did on that visit. The Washington and Constitutional convention exhibits really give perspective from the time of the United States as a brand new country – it is all from the perspective of South Carolina, but I'm in Charleston so why would it not be?  It was enlightening to recognize how much I take for granted the solidarity of United States of America.  Just 240 years ago when the constitution was put together with great debate, and 160 years ago when South Carolina succeeded and the civil war broke out – it was no so cut and dry. 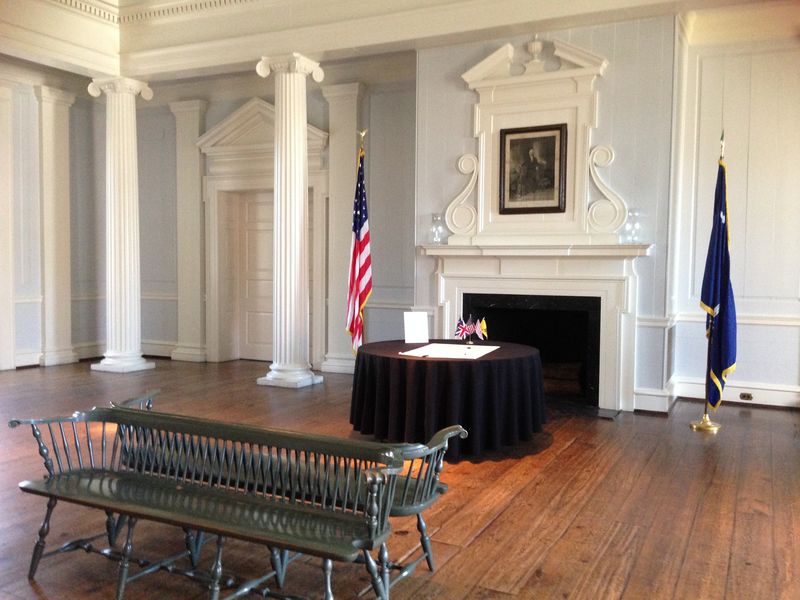 The downstairs floor, below the ballroom holds antique/preserved furniture and clothing from the late 1700s.  Here is Thomas Sumter's suitcoat worn in 1766. 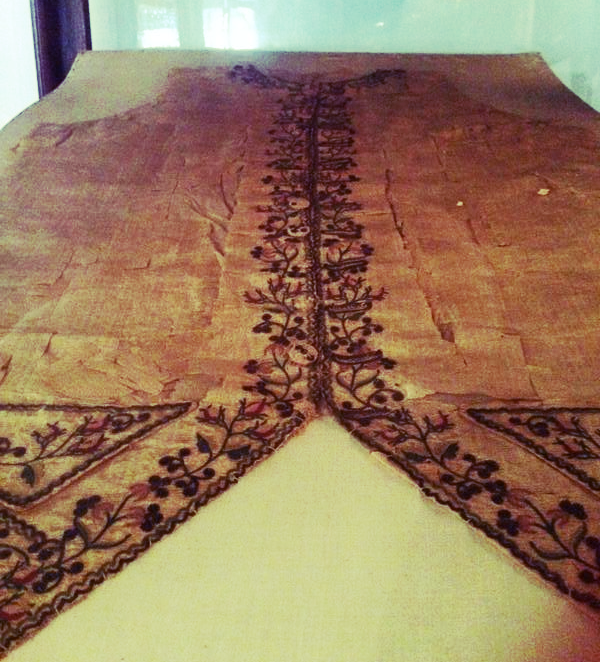 The clock struck time to go meet my sister and family so I left The Old Exchange and headed back to the hotel just in time to see her car drive by and turn the wrong direction to park at the hotel.  We eventually worked it out, got the car squared away with the valet then headed out to explore The Battery and White Point Gardens. 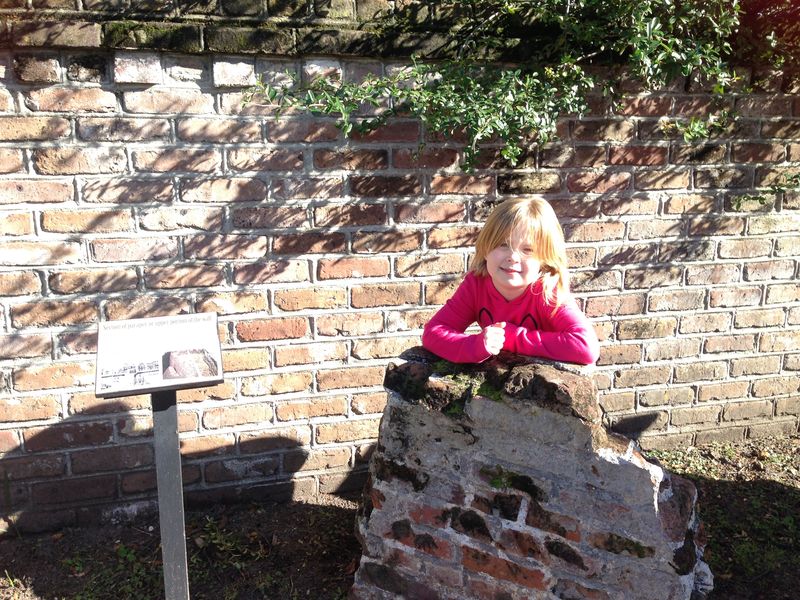 My niece Kira is a complete ham.  Here she is with a bit of escavated original Charleston wall parapet just down East Bay Street. 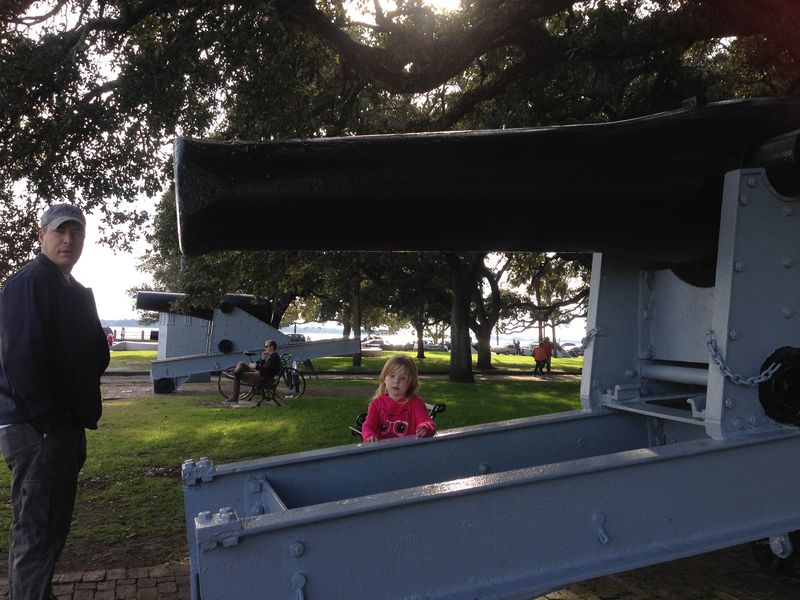 The Battery is on the outer edge of White Point Gardens where there are multiple statues in memorial to revolutionary and civil war heroics, including this fun neoclassical tribute to the courage of confederate soldiers.  Note the placement of the leaf for modesty. 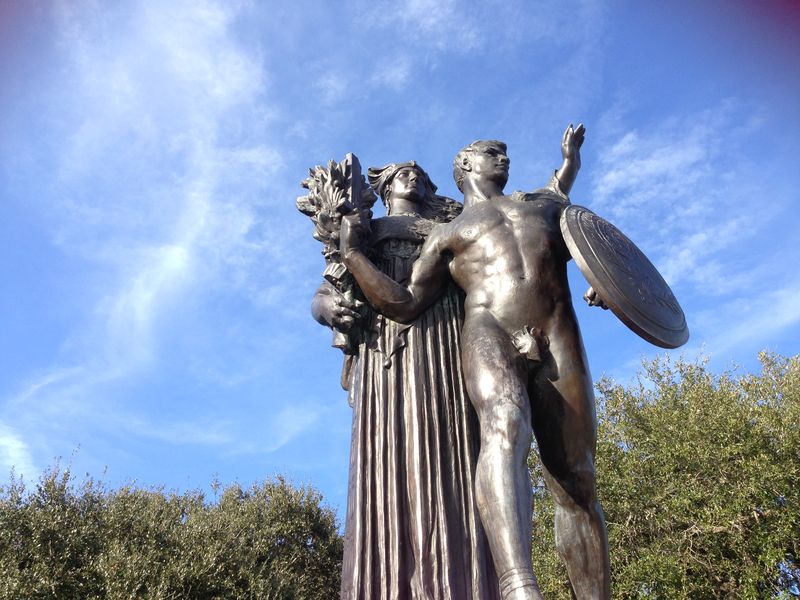 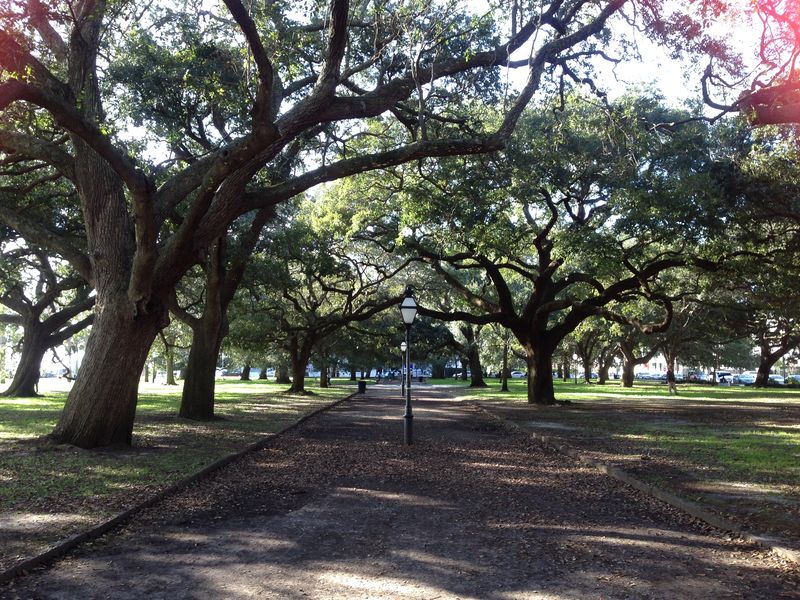 And gigantic old homes (only some of which are transformed into inns of some kind.) 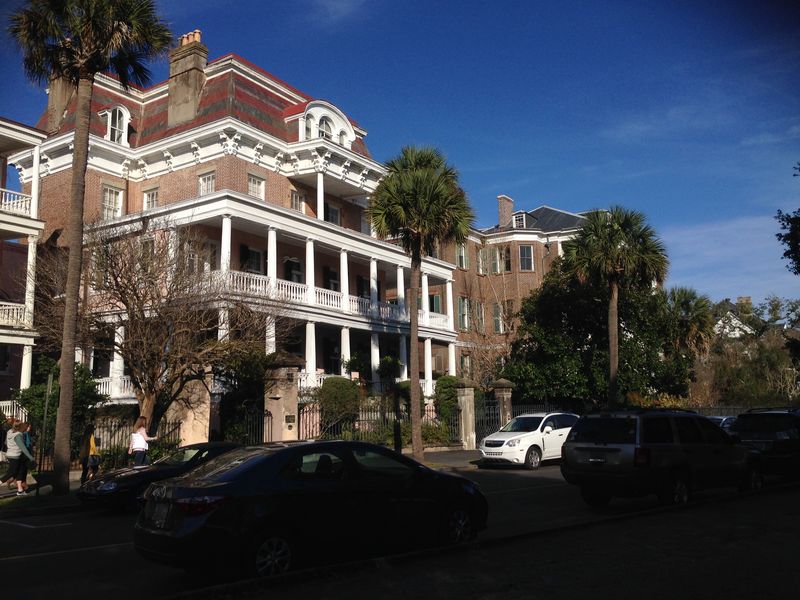 Then there is the occasional tiny old house. 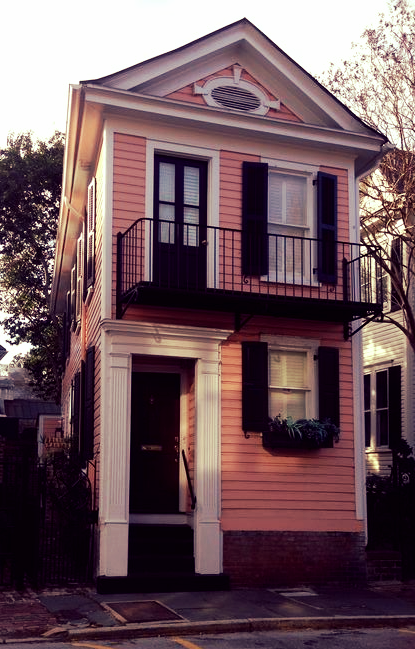 It was nearing 5:00pm and we wanted to get a carriage ride in before the horses stopped going out for the day so we headed back to the market.  We unfortunately missed all the tours for the day because we didn't pre-book, but we were able to get one for first thing the next morning at 11:00am.  My niece was not thrilled – but we thought we could distract her from the disappointment with dinner. We were wrong but we eventually worked it out. 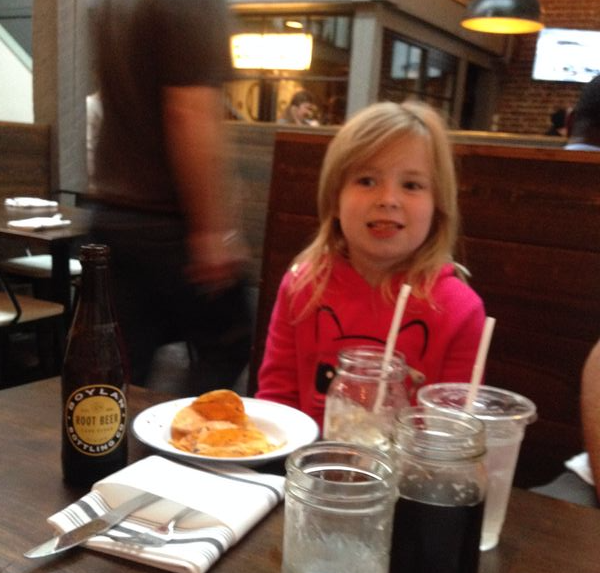 I chose Poogan's Smokehouse for the sister and family food adventure because the write-up said "something for everyone."  You apparently have to like food for this to apply because Kira only eats potatoes and bread.  These potato chips were a challenge, but the rootbeer was a real win.  Meanwhile, the rest of us experimented with all the options the menu had to offer. 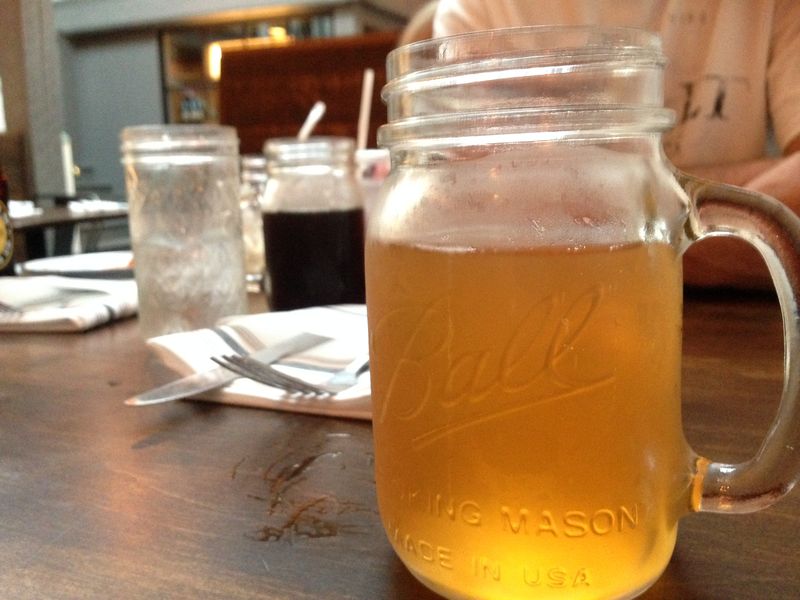 First craft beer – this is a blood orange sour beer that tasted like orange juice – kind of amazing.  My brother-in-law got something really dark called Bricklayer that was pretty yummy. Then came the barbeque fun times. 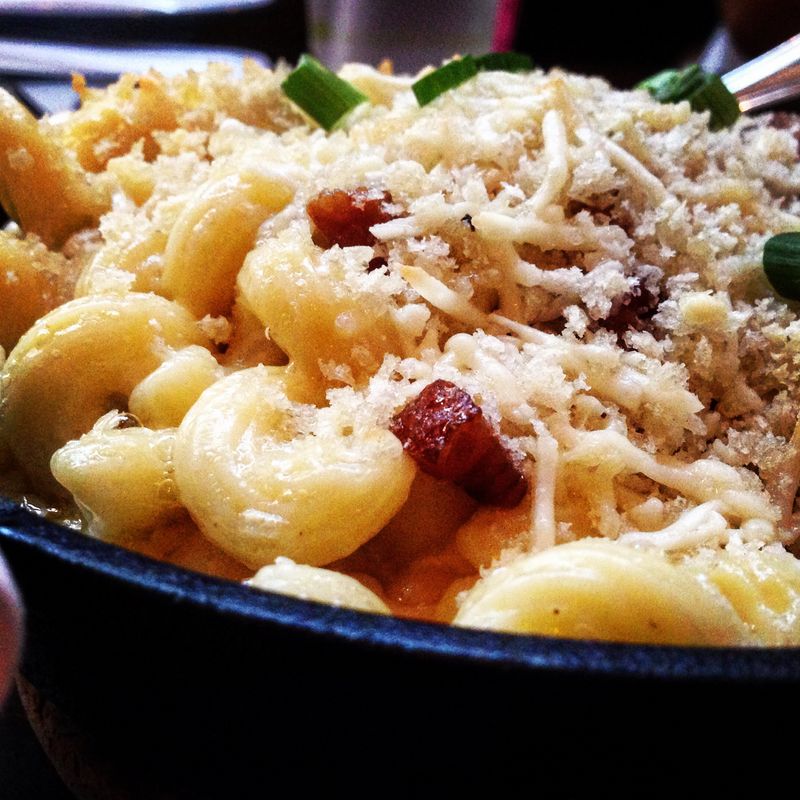 I thought I could get Kira to eat mac & cheese, because what little kid doesn't like noodles covered in cheese with bacon bits for good measure?  My niece apparently – more for the grown-ups.  We all enjoyed the gooey joy immensely as it tasted like eating sharp cheddar sauce with a hint of smoke from the bacon – the macaroni did not get in the way of the flavor at all. 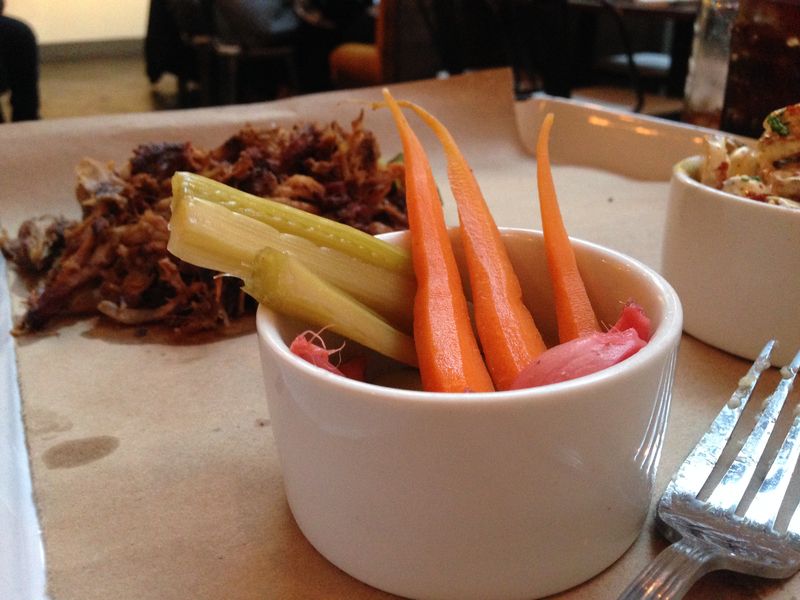 My sister chose some very interesting house pickles that we determined had cloves in them as a side with her main of pulled pork. 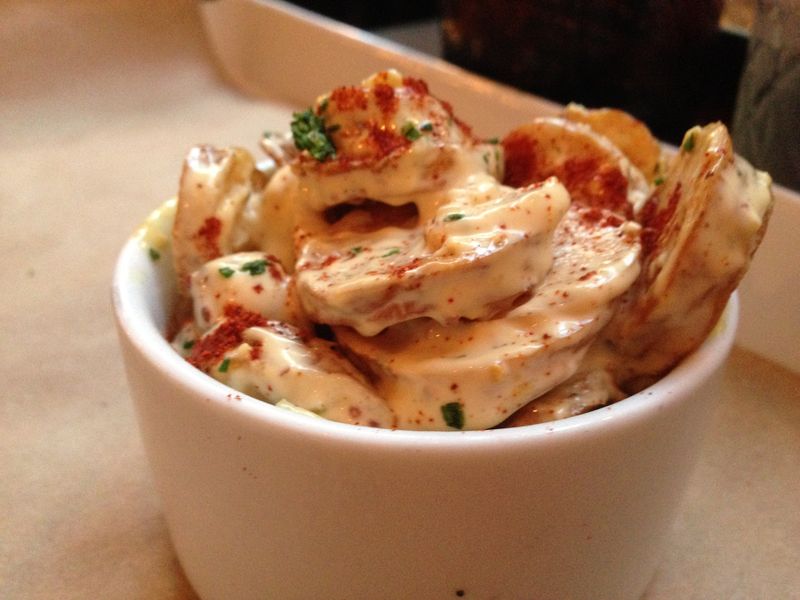 Nathan got the smoked sausage and pulled pork – the smoked sausage was the most savory and complex barbeque sausage I have ever tasted.  There was some kind of herbaciousness going on in there that complimented the smoke just perfectly but neither of us could identify what exactly it could be.  You can also see his other side of baked beans to the far left.  The beans tasted as if they were just taken out of a fire, pure smoke flavor with a bit of porky savory going on.  The most complex flavor in a bean dish I've ever tasted. Absolutely no sugar flavor, just bean and smoke. 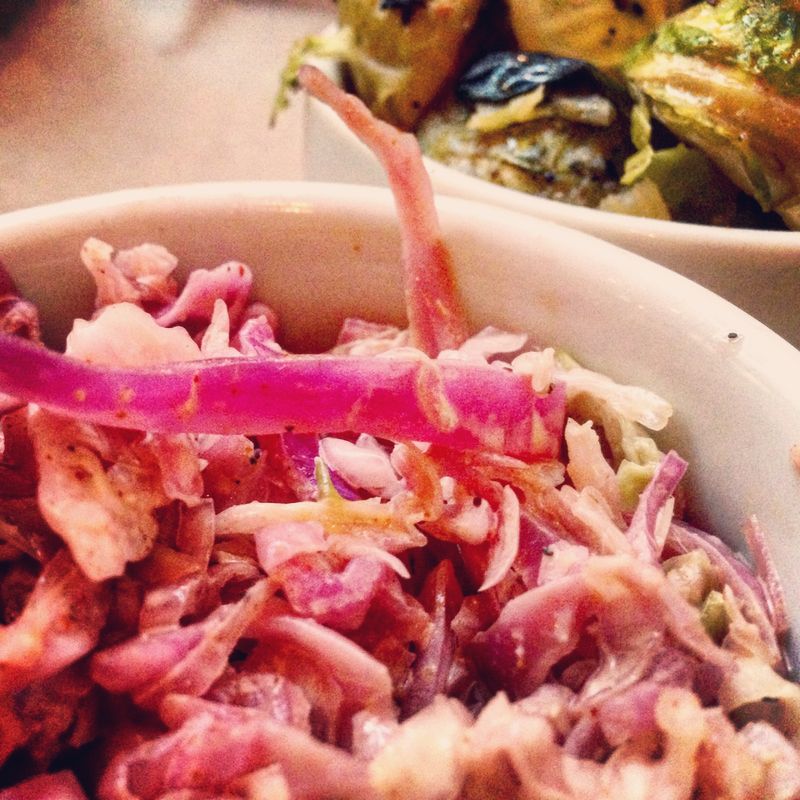 I chose coleslaw and brussel sprouts with my main of a 1/2 rack of ribs.  It was the first time I loved a coleslaw – I ordered it, not because I wanted coleslaw but because I wanted two purely vegetable sides to combat what I had for brunch and dinner the night before.  Hail to the vegetables! 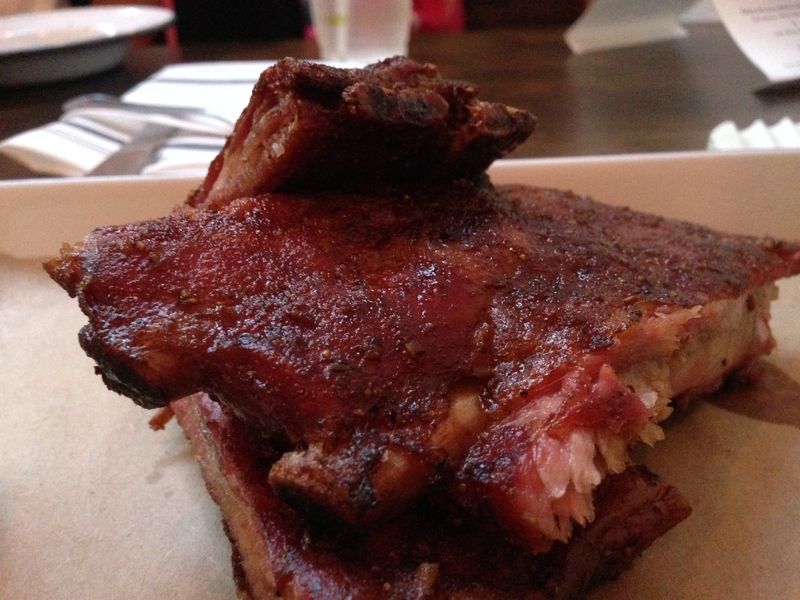 They went great with my pile of pork ribs.  Ribs which were quite good – and went great with all the Carolina BBQ sauces that were available for dipping.  I thought that I would be able to compare the Carolina BBQ experience with my Texas BBQ experience (read my Austin blog post about Texas BBQ) but they are not the same animal, literally and figuratively. Texans are all about beef, Carolina is all about pork.  Carolina is a one man operation in either a make-shift small contraption or a chef-led flavor experience like Poogan's – where in Texas it was like a National Geographic experience and the BBQ devices where HUGE and almost industrial in that hand-craft sort of way.  Flavor wise too they are miles apart so they must be recognized as completely different artforms in meat cookery. 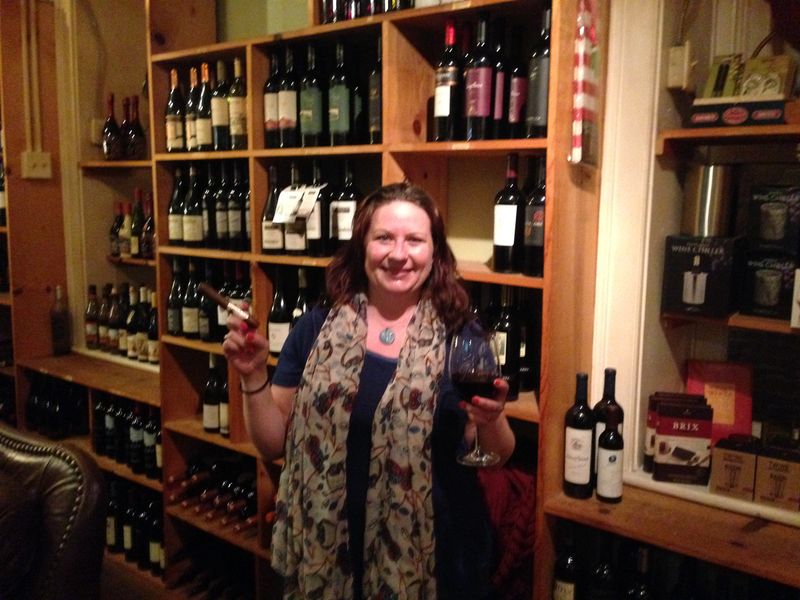 After dinner I wasn't quite ready to call it a night even though my sister was done with being out – so after some prodding I got Nathan to come out with me.  I needed to check out the interesting niche Tobacco & Wine establishment right next door to my hotel.  The lure of pairing two strong tastes like cigars and wine together is something a flavor obsessed individual just cannot ignore. So here I am with my malbec and medium bodied cigar. 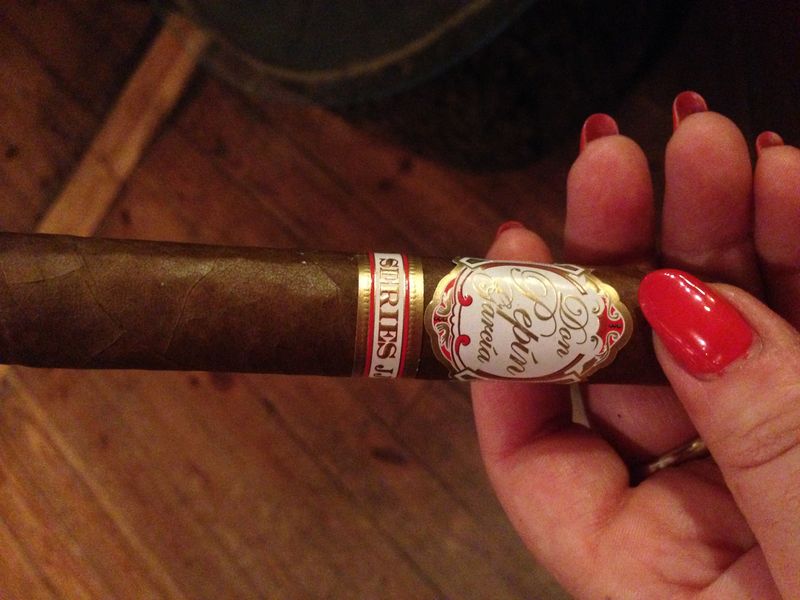 I quit smoking cigarrettes over 8 years ago, but luckily you do not inhale cigars – it was still hard to actually smoke more than a 3rd of it.  The big bearded man on duty did expertly pair the cigar with the malbec, however, so the flavor experience was worth the heavy smell that followed us out of the smoke filled tobacco bar. 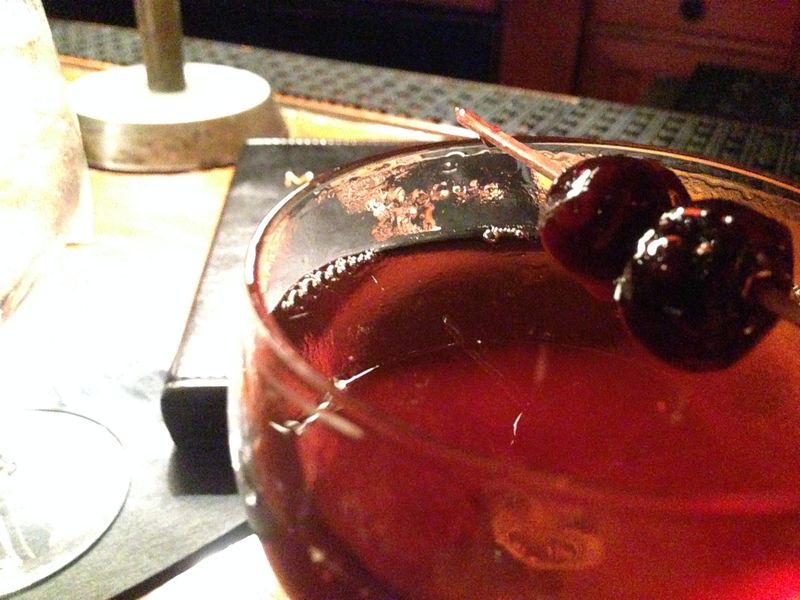 For a final encore we topped the night off with two fru-fru drinks at McGrady's bar.  I got a version of Manhatten and Nathan's was called Sam Elliott – a herby bourbon version of rootbeer.  They were both strong and pretty. 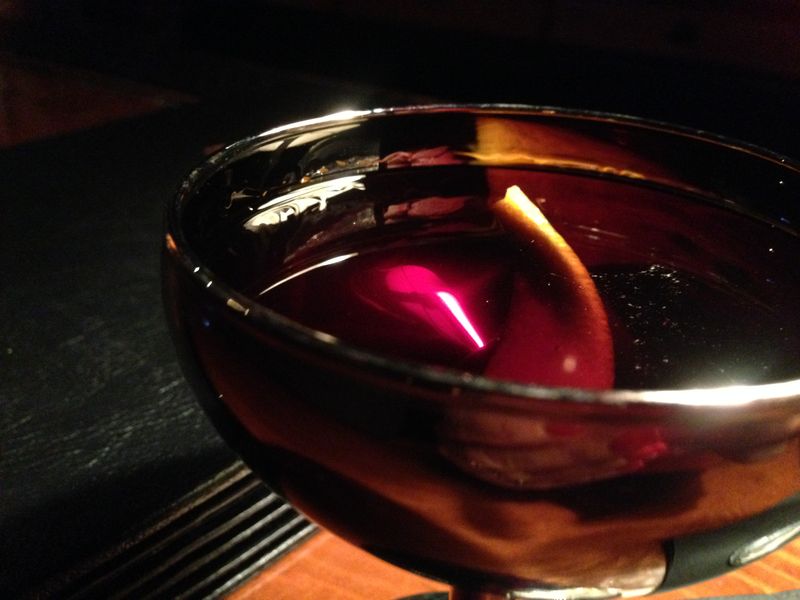 The smell of cigar smoke was still all over us and I had the most sticky feeling in my throat reminding me of why I quit smoking and actually enjoy indoor smoking bans.  But the drinks were good and the bar was mostly dead (apparently 10:30pm is close down time for bars/dining crowd in this area of town.)  We returned home and promptly took turns showering and putting our clothes in the laundry to get rid of the sticky cigar smell.

It was a good day with the sister, brother-in-law and niece I haven't seen since she was a baby.  Despite our distance however, she is very aware of me, she even named her little toy dog after my dog Odin (whose photo resides on their fridge in magnet form).  There is a bit of family resemblance. 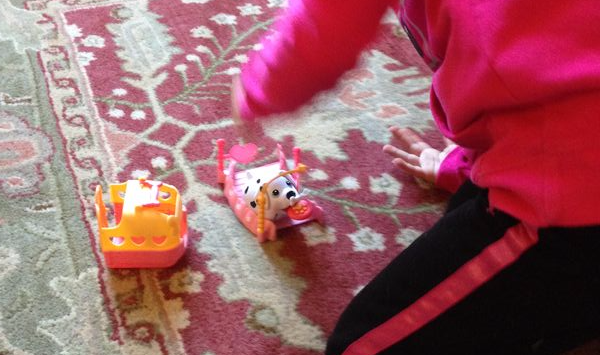 I look forward to tomorrow.