As the turkey for Part I of this post series waited to go in the oven I began stylized traditional side dishes to accompany my special Sunday night pre-holiday dinner.

No fall harvest themed meal is complete without a little squash.  For this dinner I would attempt a puree found in the same Bon Appetit magazine as the turkey recipe with a little Paprika Angel variation flare.

inspired by a recipe by chef Anita Lo featured in November, 2011 Bon Appetit

Half the squash, take out the seeds, and bake at 350 degrees for at least 1 hour in a pan with a 1/2 inch of water in the bottom.

After the squash is baked until soft, let cool for a little bit then scrape the orange flesh from the skin and spoon directly into a food processor.  Blend the squash with the powdered ginger, soy creamer, applesauce/or stewed apple chunks until it is a smooth puree.

Here is my squash after I added the poached apples chunks I had leftover from a recent Halloween party. To make this squash recipe variation I replaced the refined sugar called for in the original with apple to increase the nutritional value and reduce the sugar content.  Apples are a natural sweetener with more fiber than any processed sugar.  I used soy creamer to replace the heavy whipping cream called for because of mine and friends dairy dietary restriction.   The result was quite tasty and favorite at the table.

To accompany the squash and turkey I decided to create a gluten-free stove top unstuffing. 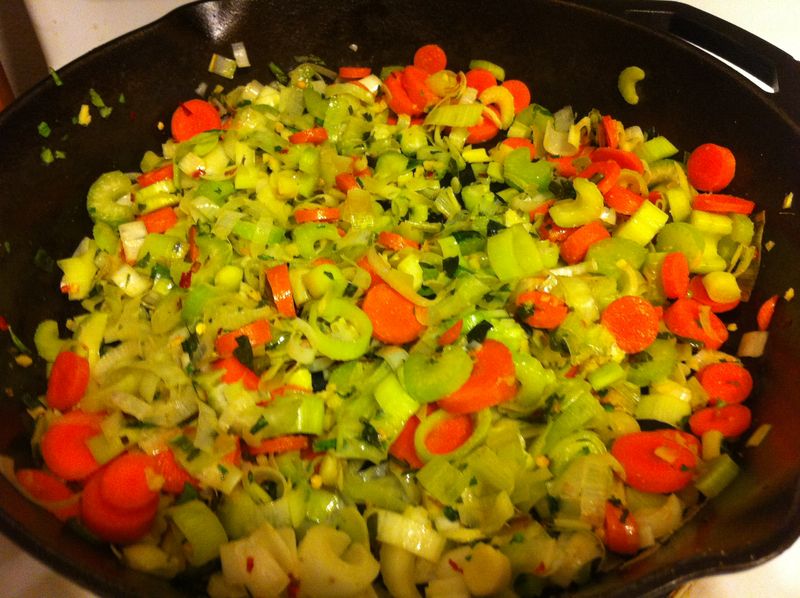 1 bunch of fresh basil chopped (about 4 or 5 stalks)

4 cups cooked rice (of any variety)

Saute the leeks until they are soft and nearly carmelized then add the carrots, celery, salt and chili pepper and fresh basil.  Let cook on low heat for at least 20 minutes or until celery is no longer hard.  Add rice and Braggs stir until thoroughly mixed then let heat on low for another 30 minutes to an hour so flavor can thoroughly soak through rice.

Last but not least no self-respecting Turkey Day prequel could be lacking in dessert.  Thanks to my partner Lamar's brother & sister-in-law Jay & Maria I had a hefty box of fresh Washington apples to eat. What a better reason to make apple crisp? 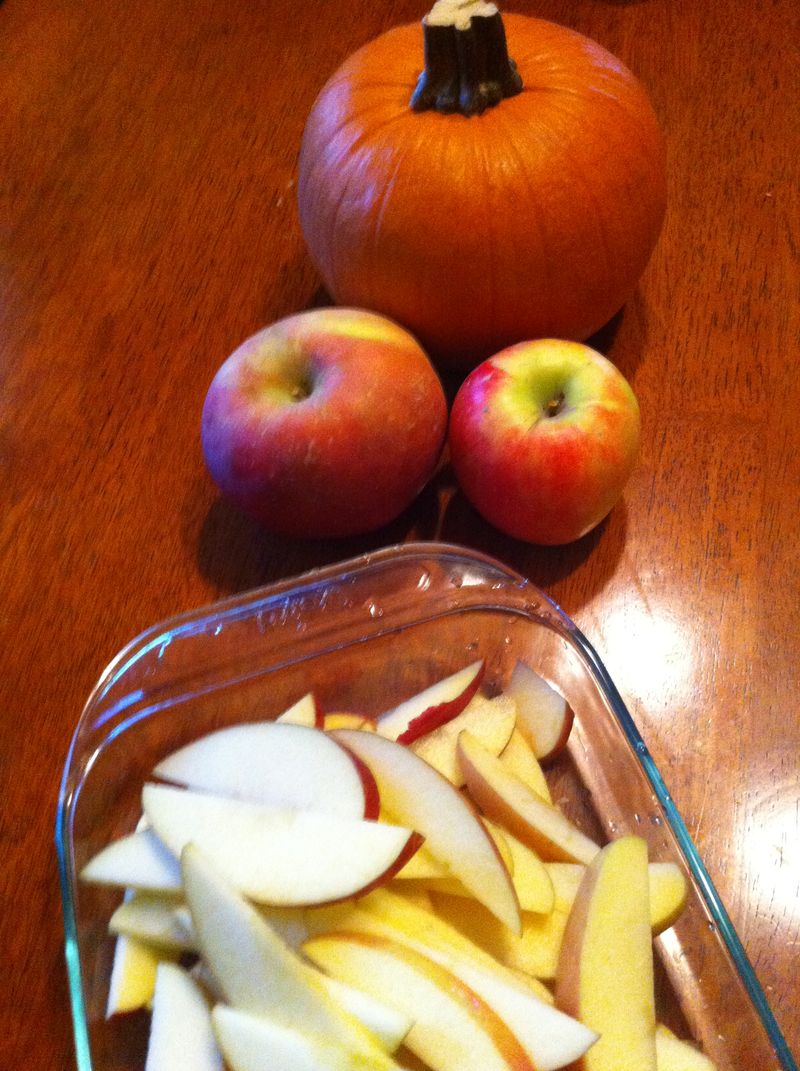 The best  thing ever for a fall desert feast.  To keep the health and flavor factors up I pulled out my slightly dramatically titled  Antioxidant Save-Your-Life Cookbook off the shelf for some tasty but nutritious dessert action inspiration.  From Becca's Apple-Blueberry Crisp recipe I created:

Chop the apples and mix with lemon juice, honey, cinnamon and nutmeg.  In a seperate bowl mix the flour, rolled oats, craisins, pumkin seeds and butter (chopped into small bits).  Place the apples in a 9 x 12 baking dish and cover them with the flour and oat mixture. Bake at 350 degrees for 1 hour. 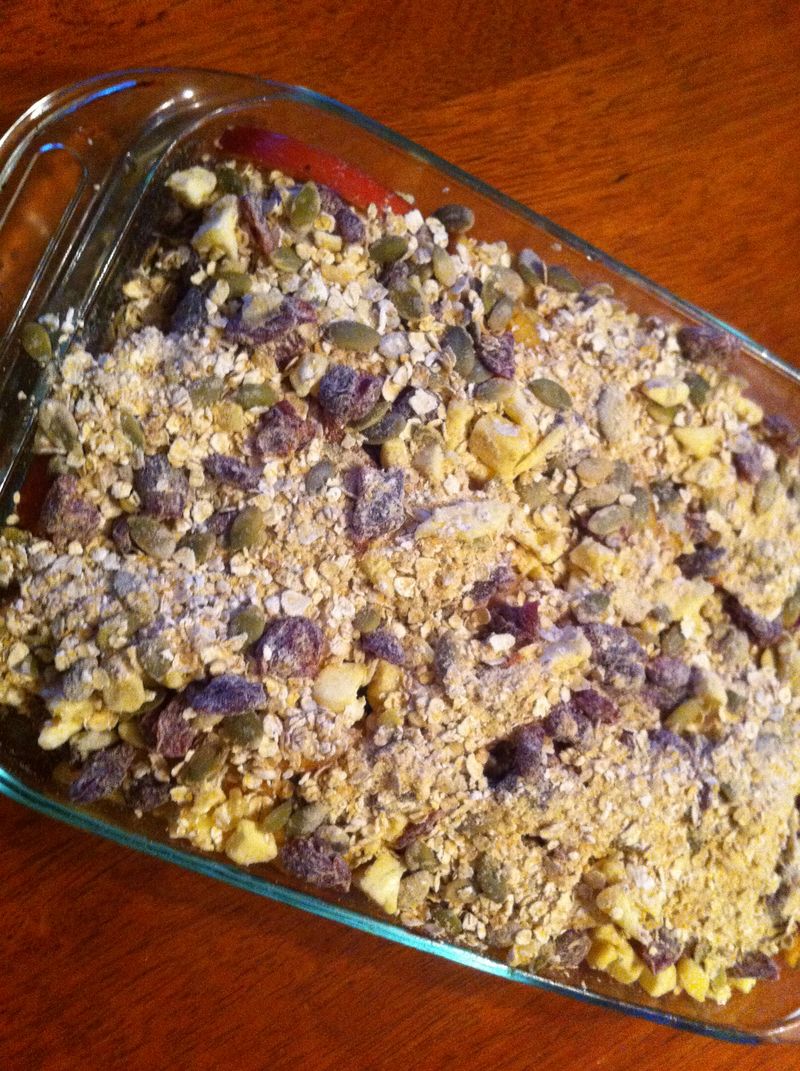 Luckily, I have a partner and three friends to enjoy a little turkey day practice round – so much to appreciate and be grateful for – a great holiday prequel. 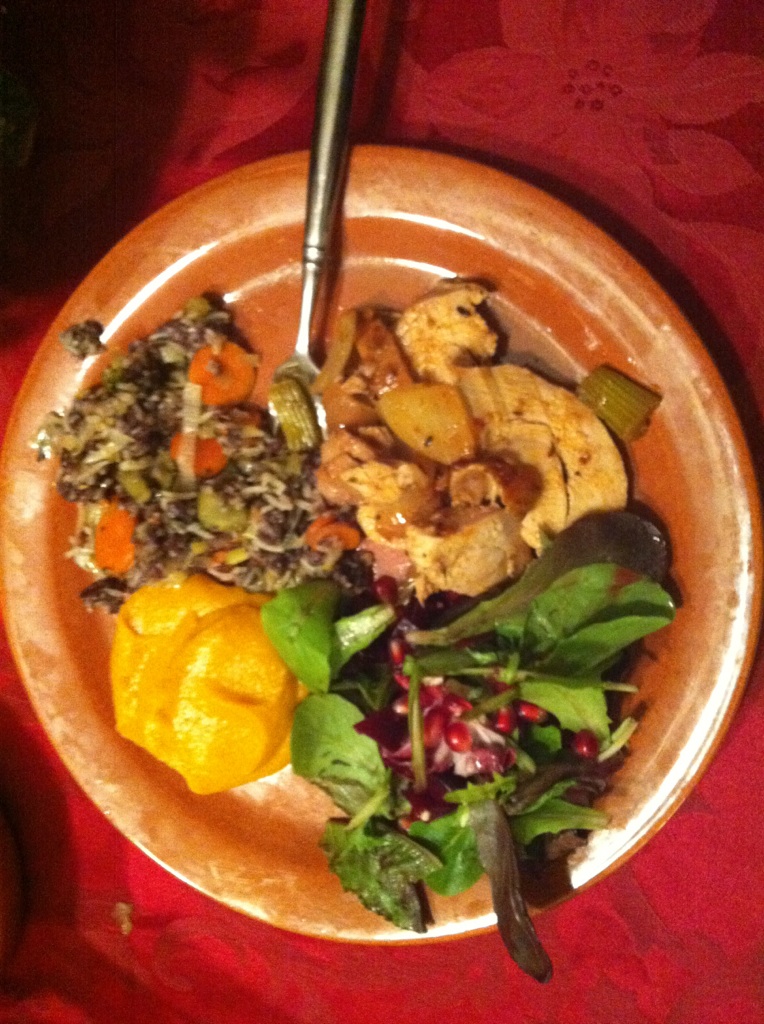