Once upon a time in a galaxy far, far, away my Mother gave me a copy of The Star Wars Cookbook. 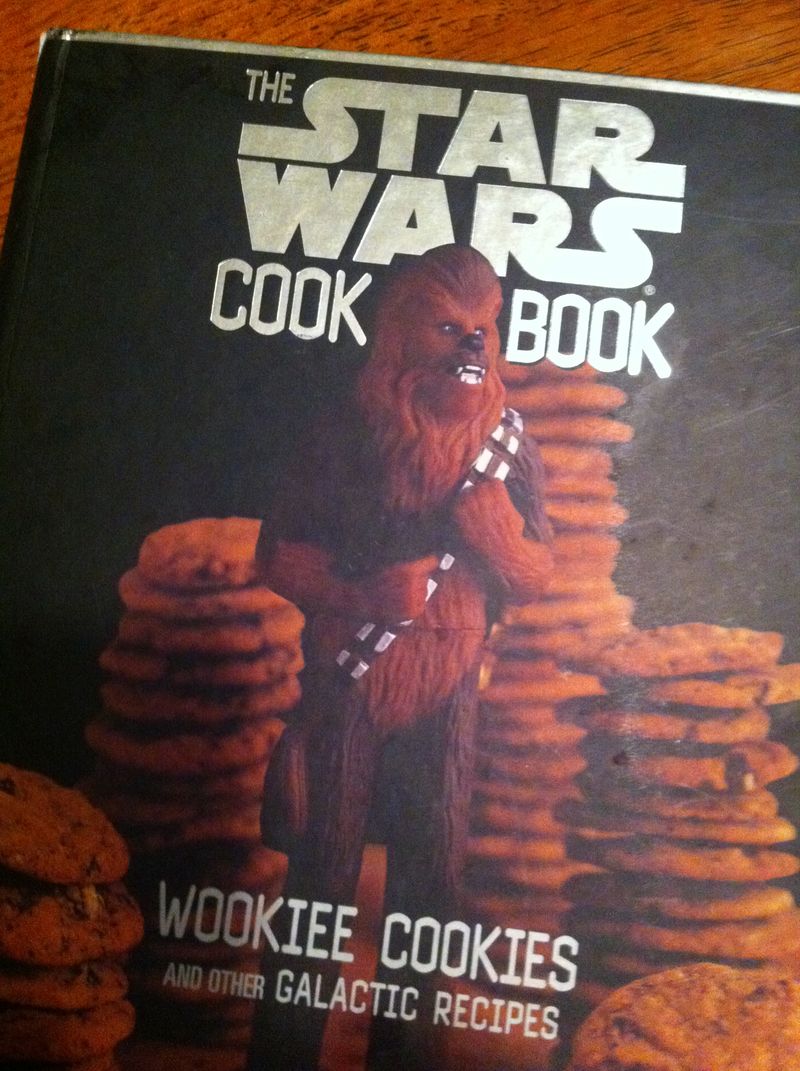 As a young cook and Star Wars geek it was one of the best gifts ever.  In this cookbook is one of my favorite recipes for chili.  Mos Eisley Cantina Chili to be exact. 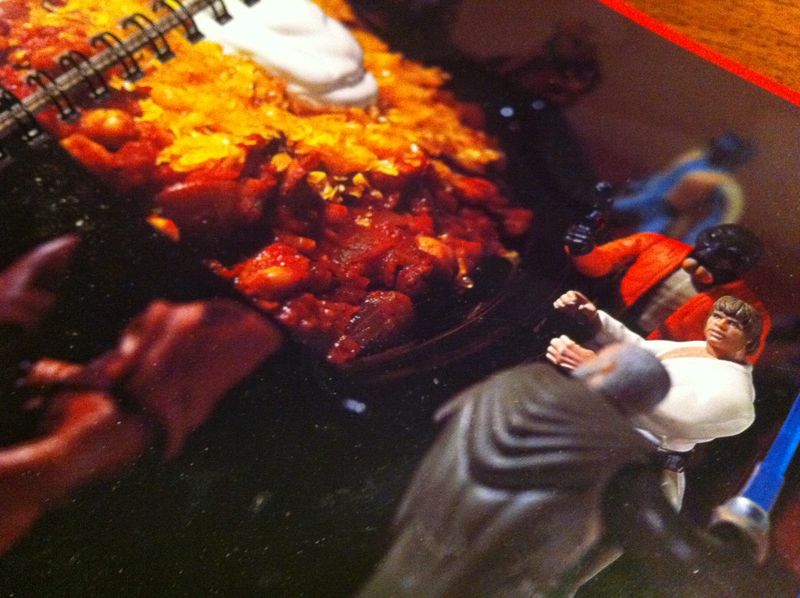 The cookbook is quite a trip filled with photos of action figures and foods named after Star Wars characters.  In the many years with the book in my possession I have made the Cantina Chili and Wookie Cookies.  The chili, being vegetarian, was once a staple monthly meal at my college vegetarian cooperative dorm – because it was good and still amazingly simple to make even if you were feeding 25 people. If you are cooking for yourself and just a few otheres this is a chili that you can make in less than 15 minutes of prep work and 20 minutes of bubbling beans.  It is likely the easiest chili in the universe.  It is the effort of chopping and onion and opening 5 cans (two diced tomatos, 3 cans of beans). 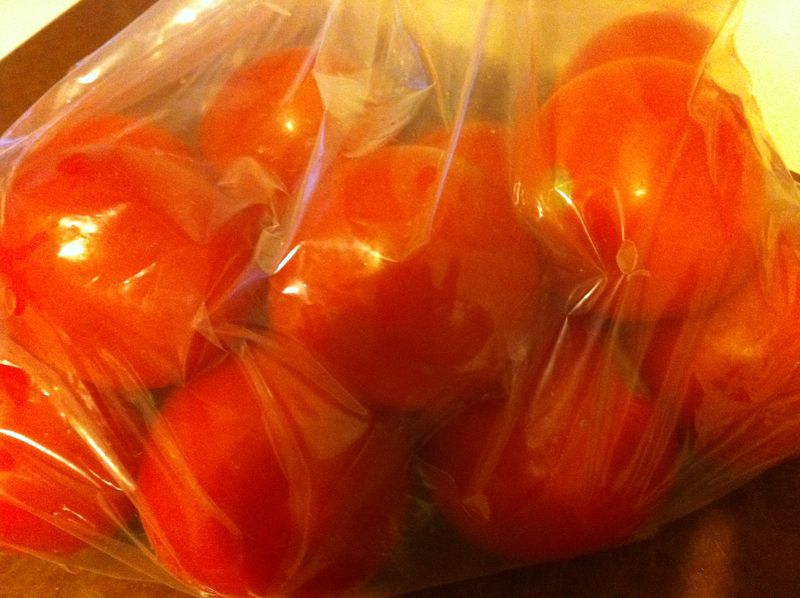 Now if you happen upon a value bag of tomatos for a $1 at your local vegetable stand you can make the tomato base from scratch for a little extra love. 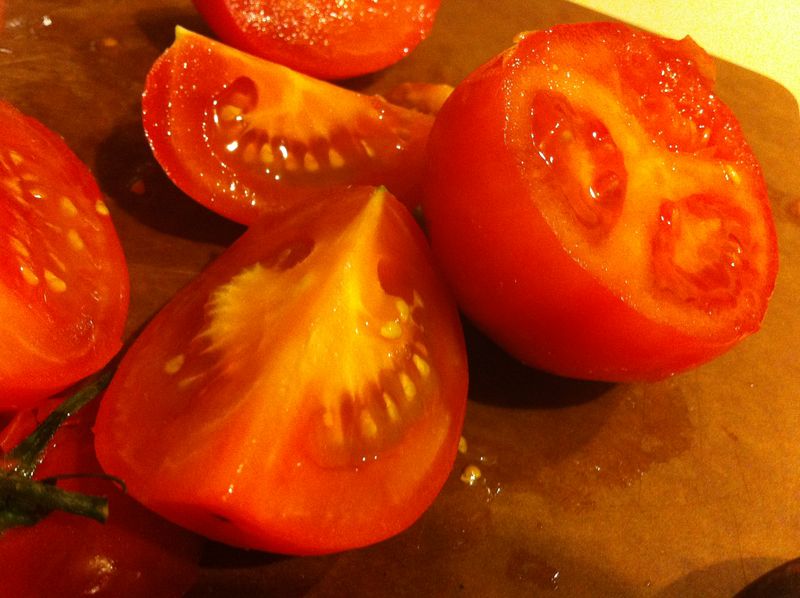 As tomato season is usually long over by the time you are craving the comforts of chili it is just fine to used canned tomatoes.  In fact, studies have shown that canned tomatoes actually have more nutritional quality than their raw relatives because heat activates certain qualities of its nutrients. Lycopene, a tough cancer fighting anti-oxidant is found in tomatoes – this and its other lovely vitamins such as potassium, vitamin A & C among other things work together to reduce the risk of hypertension, macular degeneration, and heart disease.  In short, tomatoes are really good for you (unless you allergic to foods in the night shade family which would be a serious bummer). 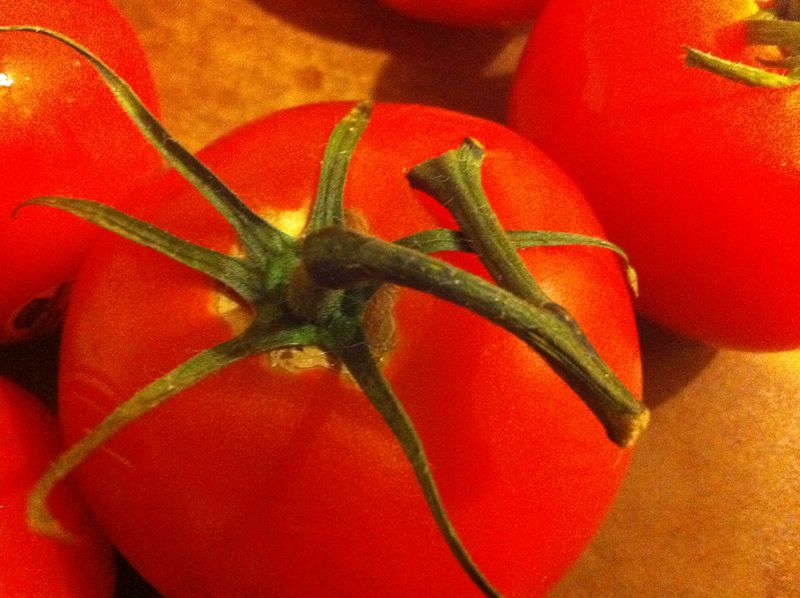 Back to the Star Wars Chili.  If you are making your own tomato base make it ahead of time or in a seperate pot.  Just chop your tomatoes into small chunks and with a little bit of oil and a pinch of salt let them cook down. 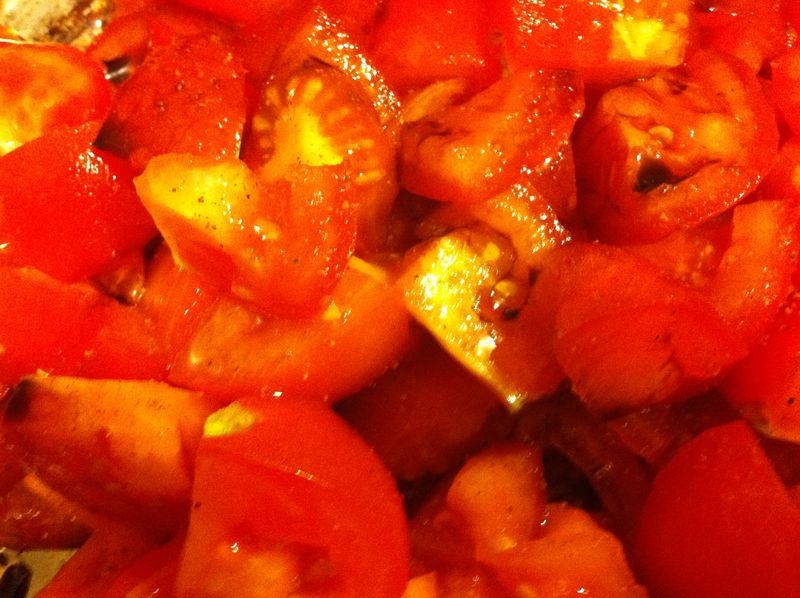 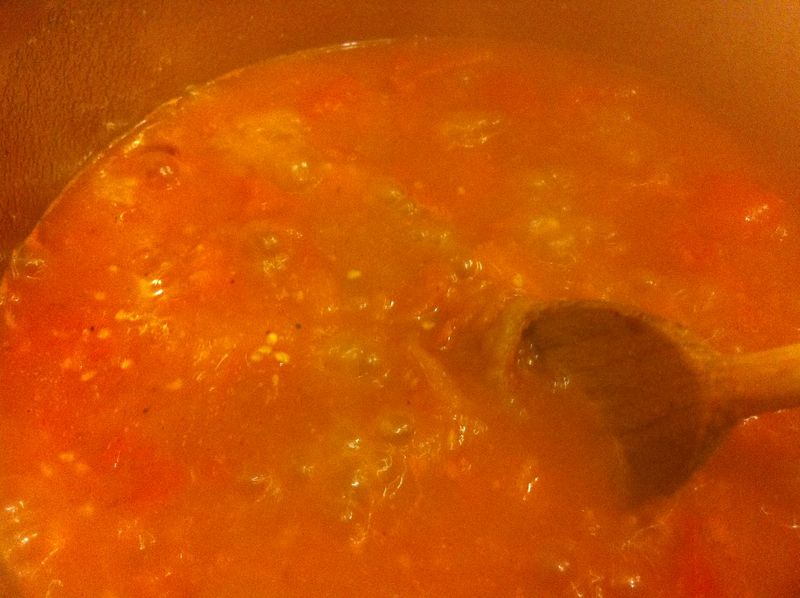 When you have a sauce you are ready to start the rest of the recipe. 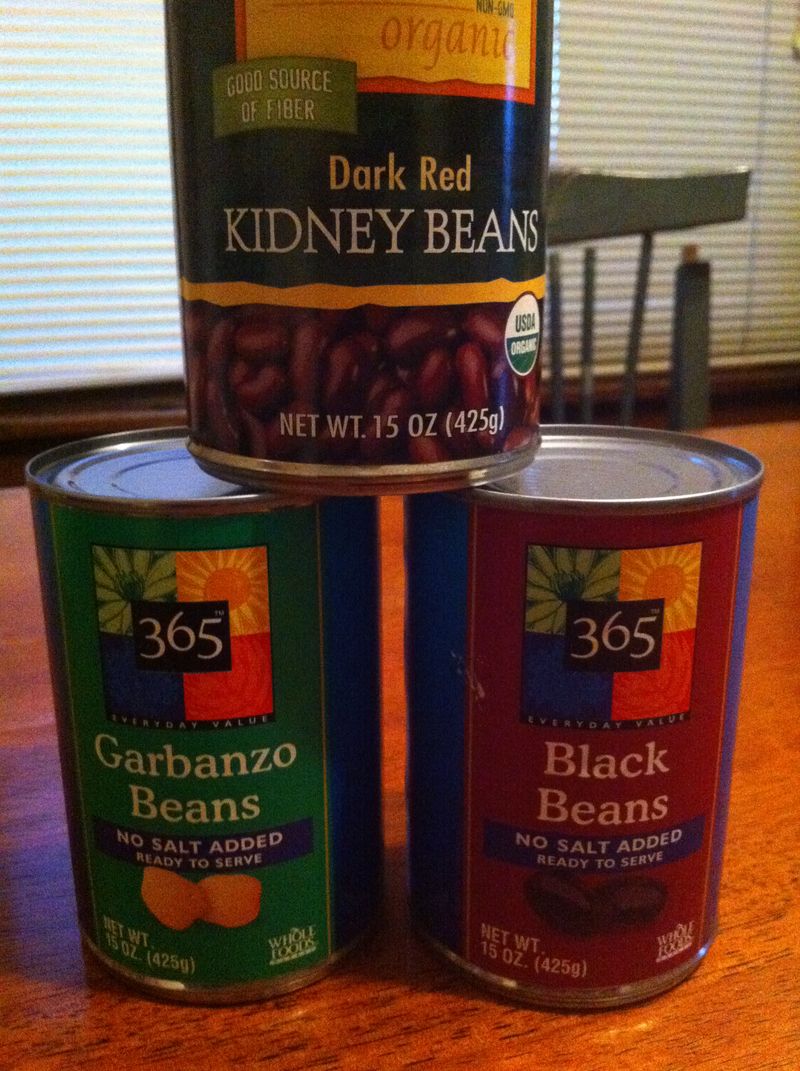 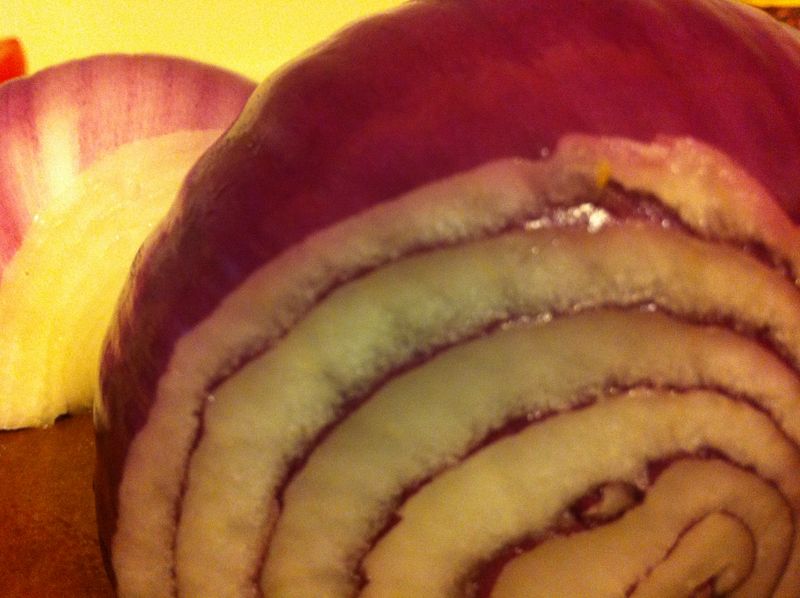 Find and coursely chop one red onion and place it in the pan with a Tbsp or so of Canola or Olive oil.  Cook the onions on a little less than medium heat until they are soft. 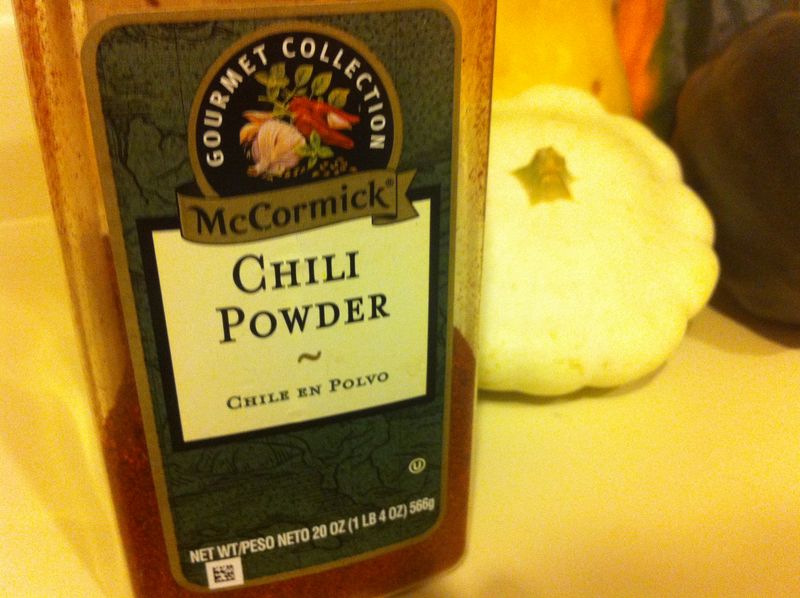 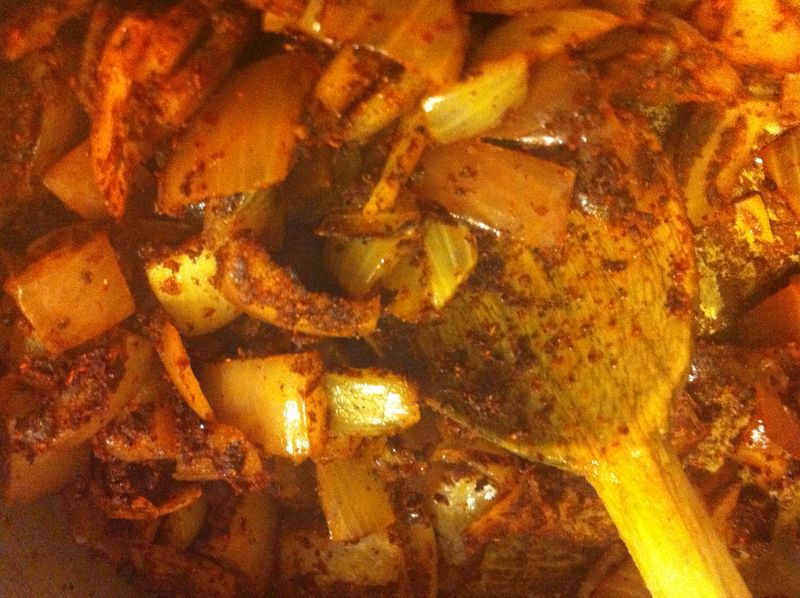 As the onions and spices are hanging out together its time to rinse your beans. 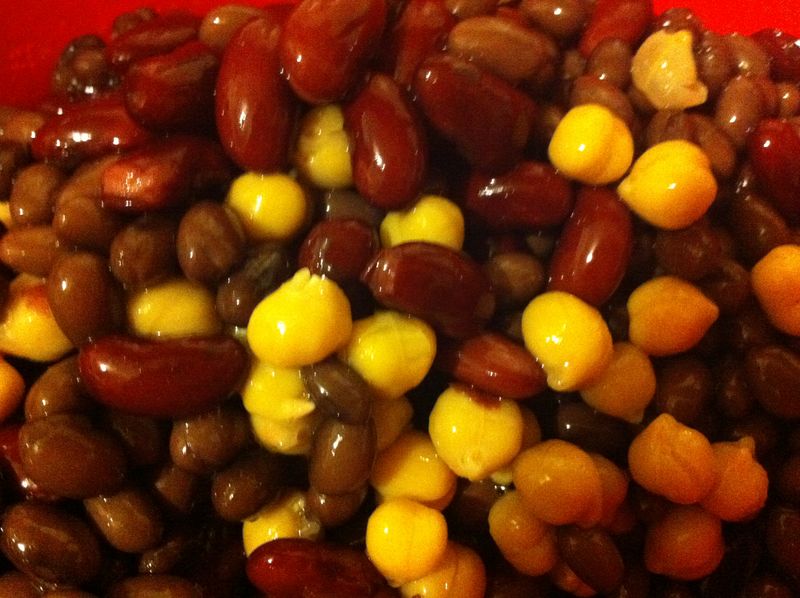 Never leave your beans in the juice they soaked in or the liquid in the can.  This is asking for gas and extra sugar or salt or whatever your bean canner added.

Add the beans, two standard cans or one large can of diced tomatoes, or in my case the pre-prepared  tomato sauce. Stir and stew together for 20 to 45 minutes on low. 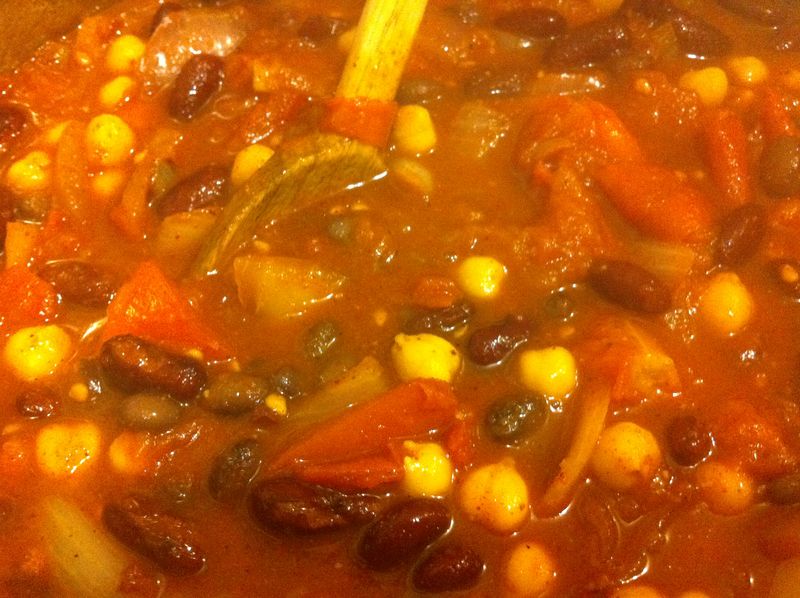 As this is a vegetarian recipe you do not have to worry about the ingredients being thoroughly cooked as they all are – the length of cooking activates flavor in the cayenne as well as joins the flavors of the beans, tomatoes and spices.  If you are in a hurry cook it 20 if not go for 45 minutes as it improves the flavor blending process.

You can serve the chili with or without cheese – but some fnd the addition of an aged extra sharp or medium cheddar to be quite satisfying. 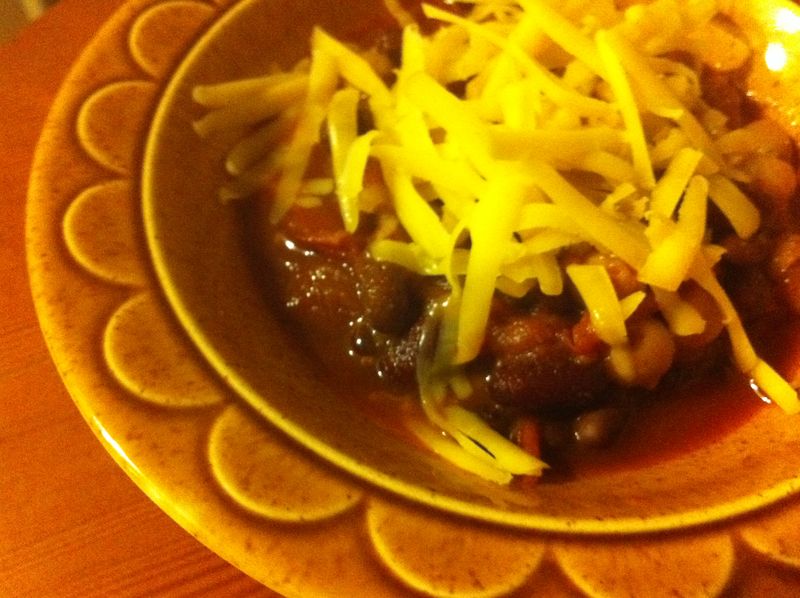 You can also eat it while watching Star Wars Episode IV: A New Hope playing the Mos Eisley Cantina scene over and over again until such time as you have memorized the lines.  It will help digestion.

Adopted from The Star Wars Cookbook by Robin Davis

Enjoy your chili and may the Force Be With You.

1 thought on “Best Chili in the Galaxy”