Does your end of year garden have a few too many cabbages?  Looking for a different thing to do with that sweet pie pumpkin other than make a pie or a table decoration?  Well look no further – its time for some creative BBQ. 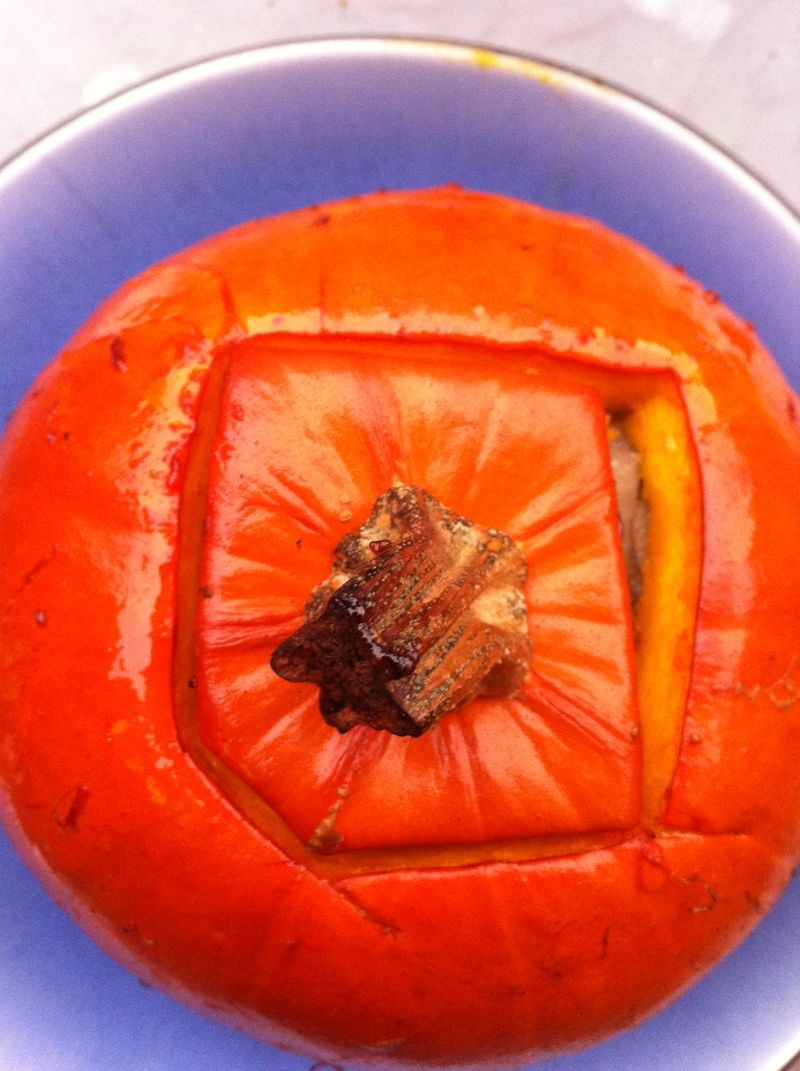 Start with two round fruits of the harvest. 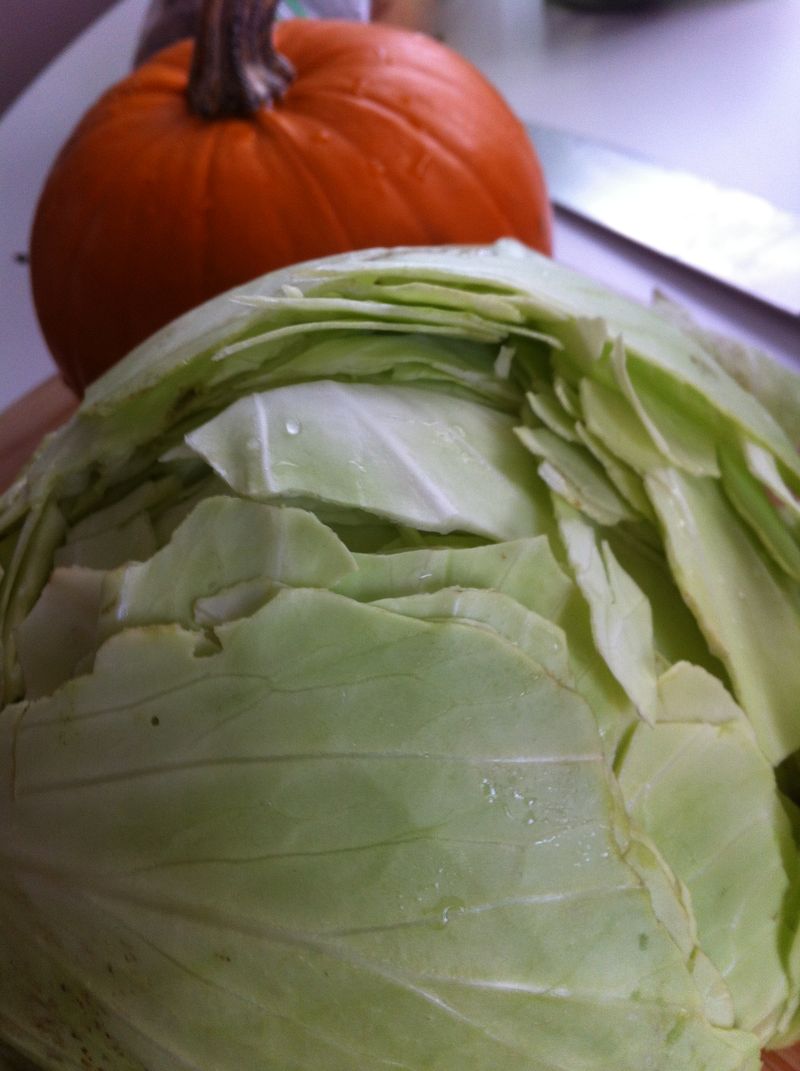 Then core them out.  In the case of the pumpkin remove its inner seeds and goo – the cabbage is a  little bit more complicated.  In fact, I had to call in a life line with this recipe to my home chef and grill master step-dad.  He is the one who showed me this recipe.  In his opinion, which is a good one,  the cabbage should be mostly cored out – so don't be afraid to put a big hole in it.  Here is a shot of my finished work. 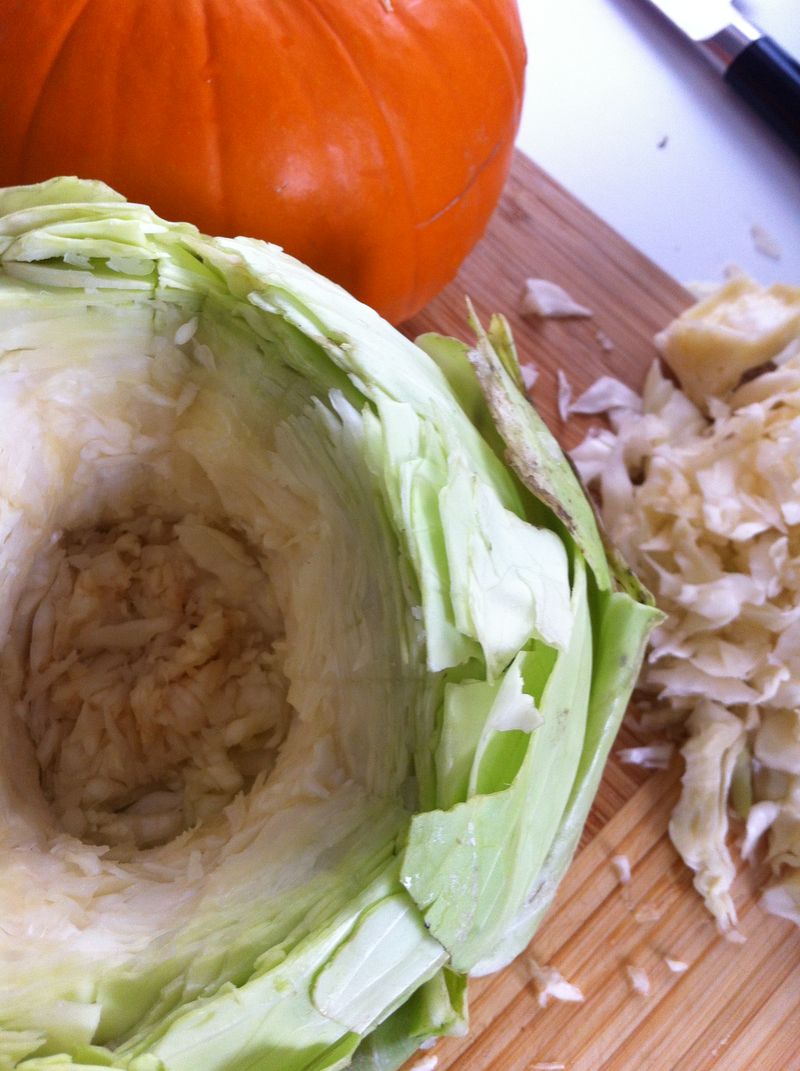 After the vegetables are empty – it is time to fill them again.  Meanwhile, you should have your grill fires going.  You want a medium fire with  indirect heat for the cabbage and pumpkin to cook for up to two hours.

The base of the fill for both vegetables is going to be bacon.  Sorry vegan and anti-pork friends.  I've tried this same recipe with salmon and/or just vegetable oil and there is just not enough umph to the oils – bacon is the only oil that can help cook the cabbage.   Sesame oil will work in the pumpkin however – making a vegan friendly option there. 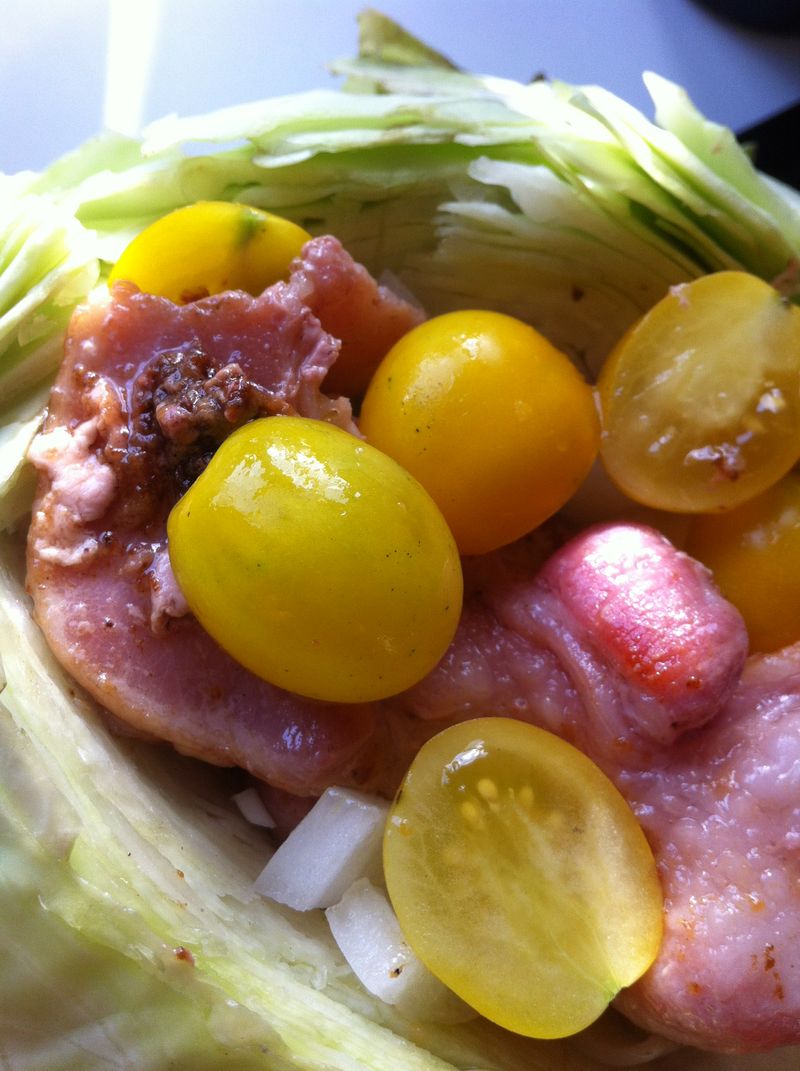 Also fill each vegetable with a hearty helping of onion, garlic, and tomato.  In our case we used garden fresh everything but store bought will do. 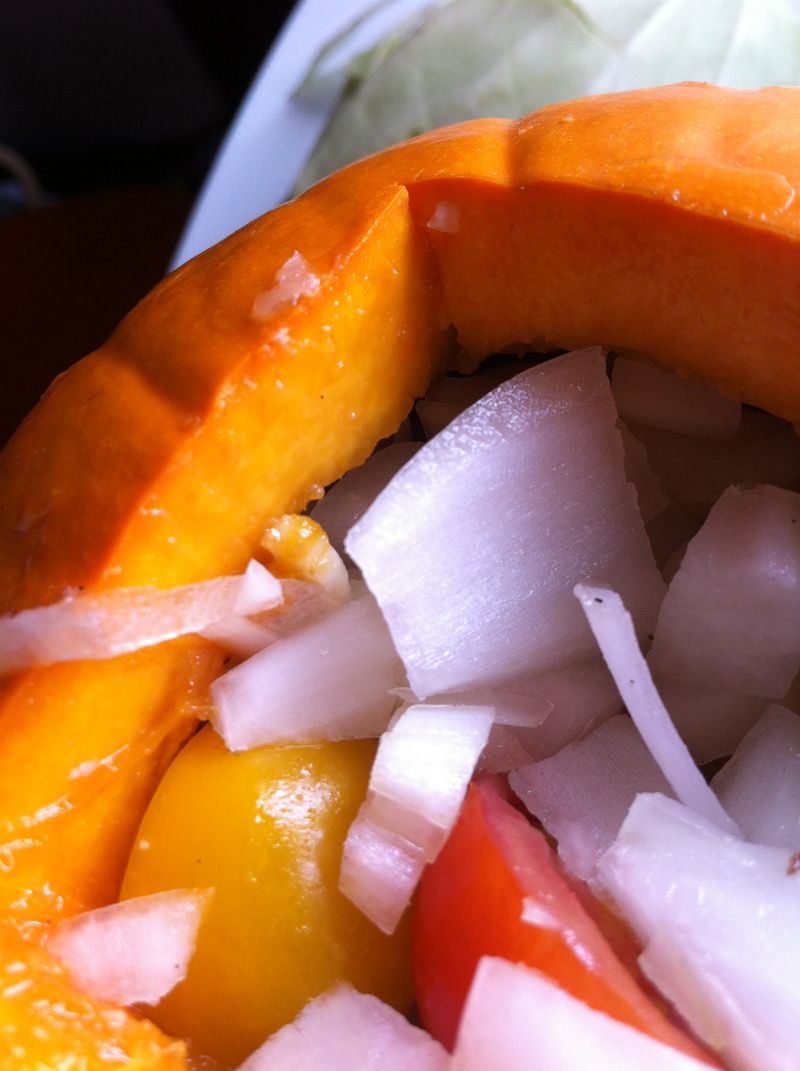 Make sure each is very very stuffed and do not forget to add a little bit more salt. 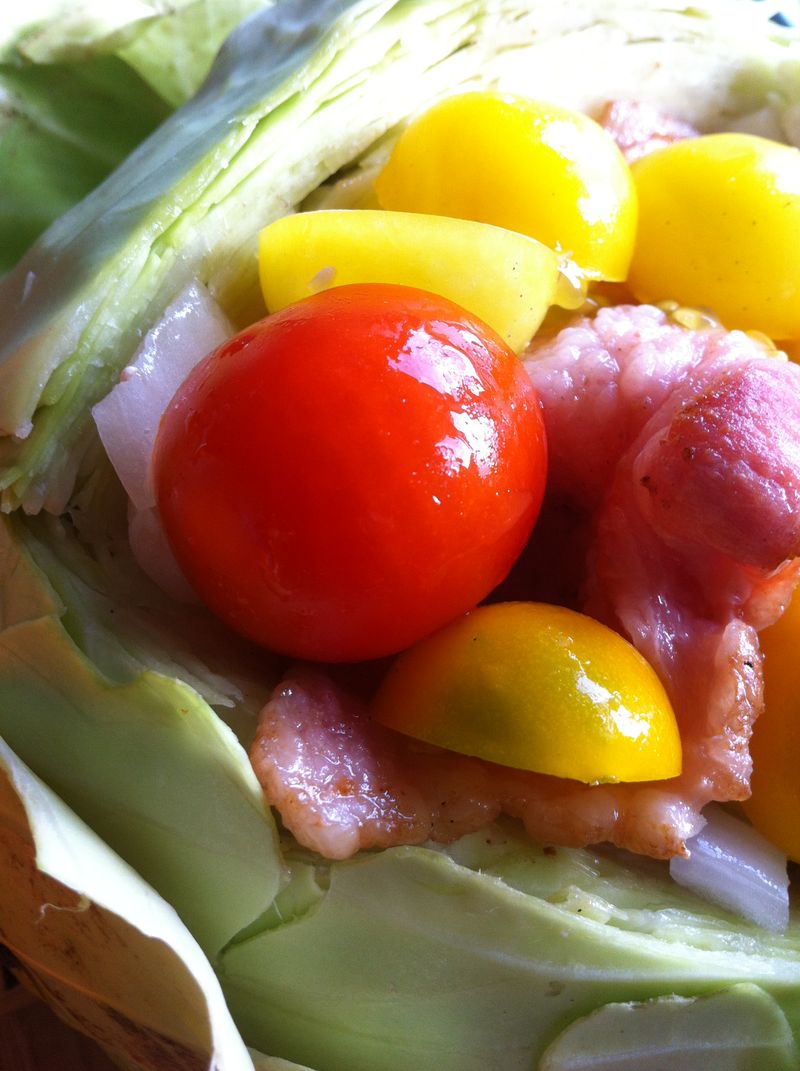 Last but not least put a half stick of butter over the top of the cabbage and at least a quarter into the pumpkin. 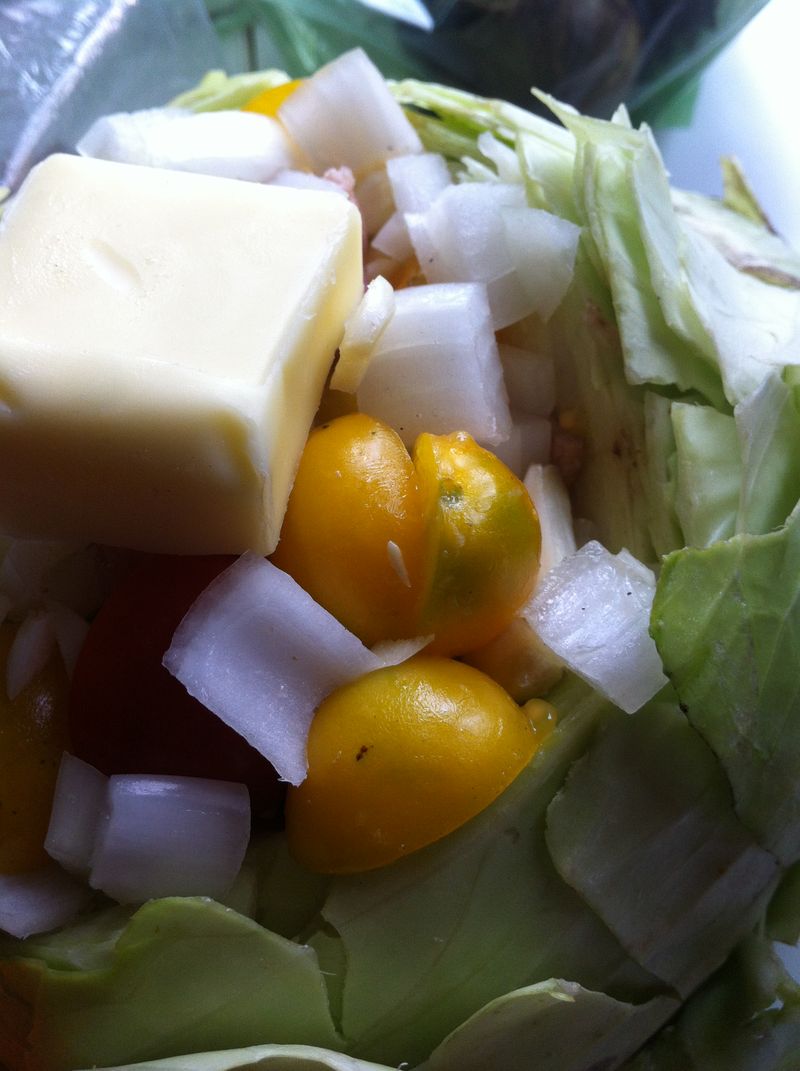 Now you are ready to grill your round balls of future yum.  We used a Big Green Egg but you can do this on any grill where you can produce indirect heat. 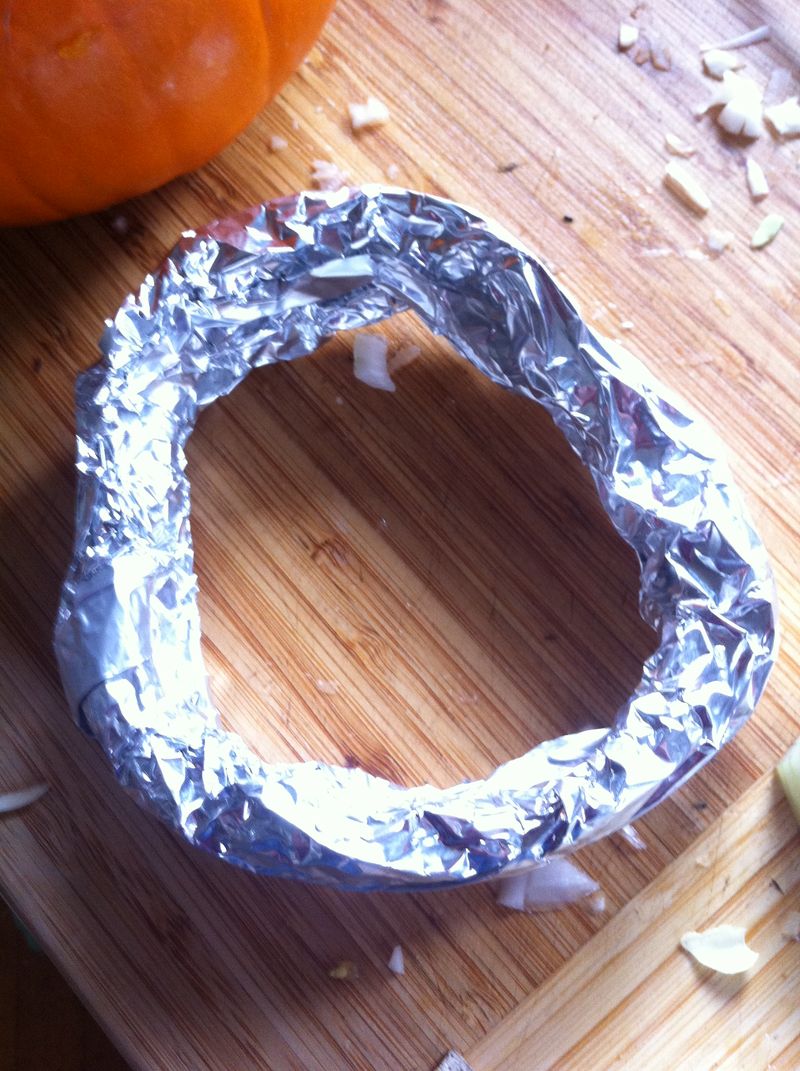 Note the clock and return around two hours later.  The pumpkin will be done – the cabbage you can test by seeing if a skewer will pierce it easily. 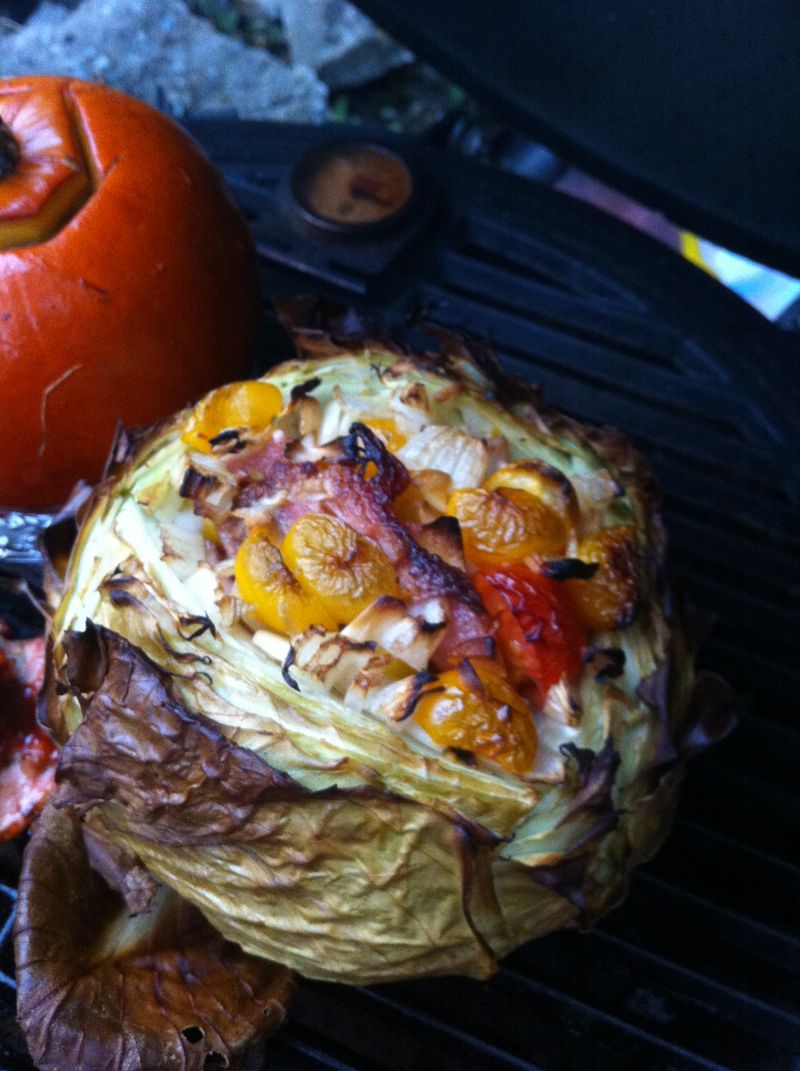 It will look something like this. Upon its completion cut the cabbage into quarters to serve – anything else will turn ugly. 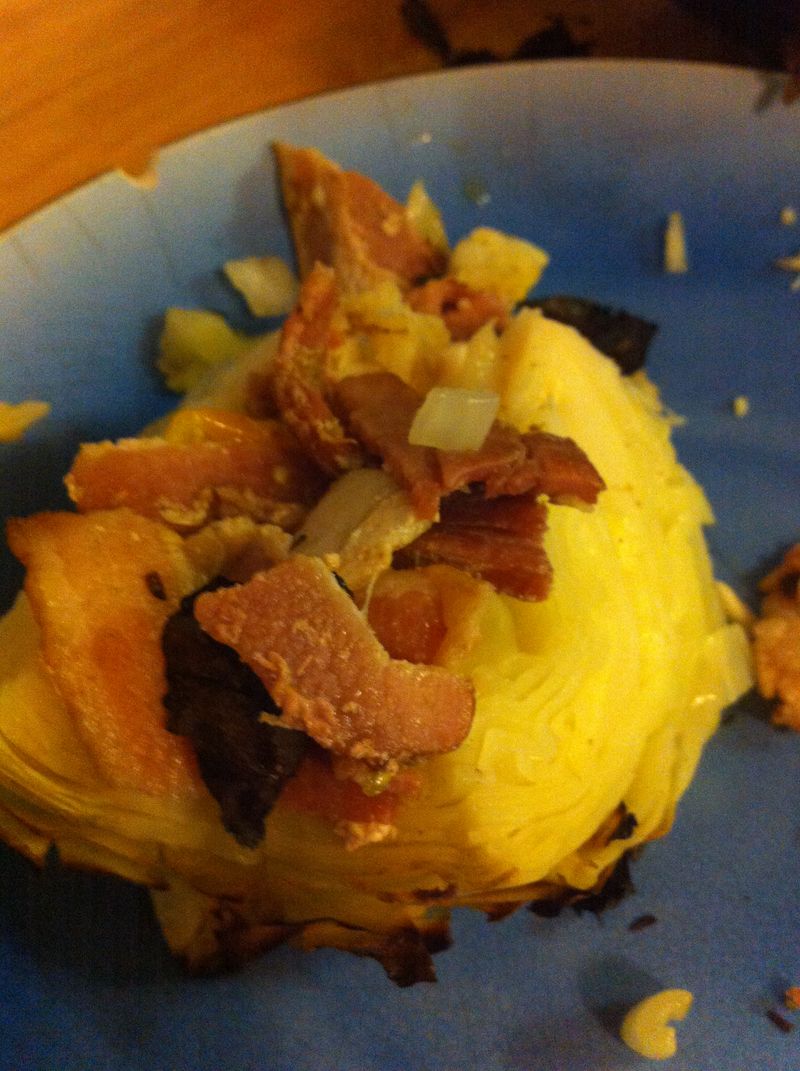 The pumpkin will be a little easier. 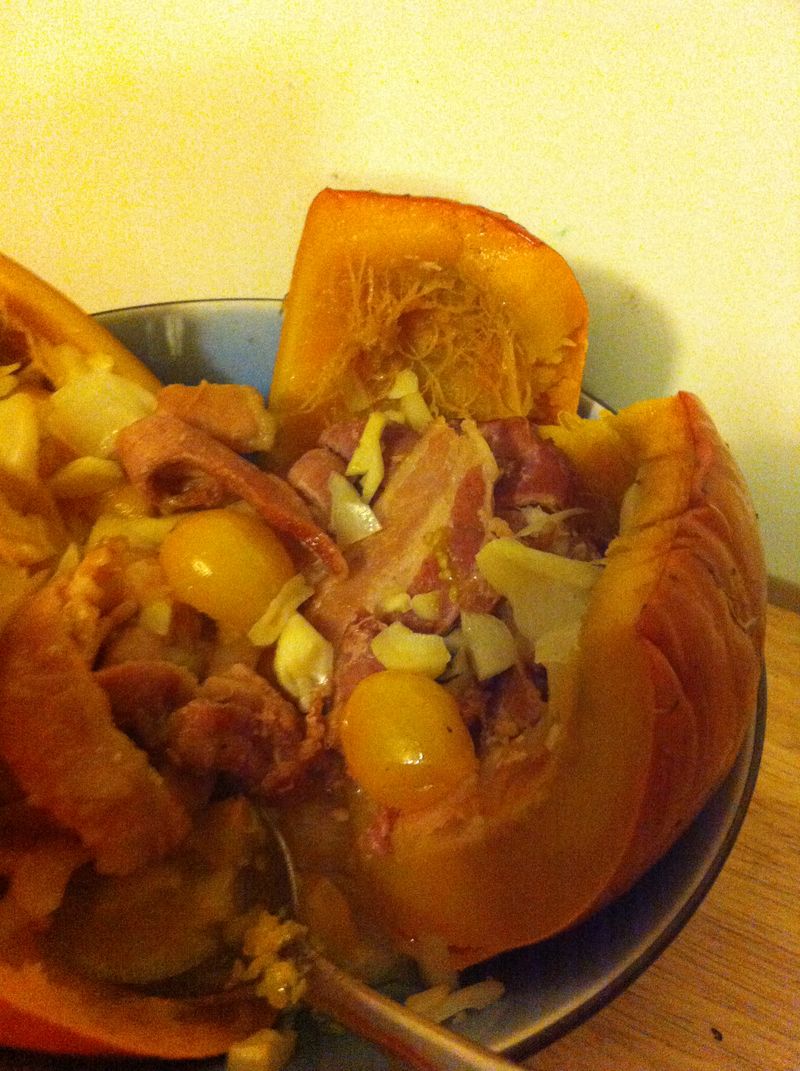 We served our round vegetables with a side of BBQ chicken thighs – straight from Yama's astute observation of the reality TV show Pit Masters – of which he is a prodigy student.  Lucky us.

6 pieces of bacon – half cooked

Step 1: Wash and dry the cabbage.  Leave the outer leaves on to protect it while it grills.  Cut into the cabbage carefully and core out its entire center section.

Step 2: Salt the interior of the cabbage and set aside.  Cook the bacon half-way and place it and its grease inside the salted cabbage.

Step 4: Slice the butter and set on top

Step 5: Place on the grill on top of an aluminum ring and let cook for 1.5 to 2 hours – or until a skewer easily pierces the cabbage.

Same ingredients as above – just use a bit more of everything to fill the larger pumpkin cavity.  If you want to make a vegan/vegetarian version substitute sesame oil and olive oil for the bacon and butter.