I woke up Saturday morning in Portland after a night of feverish dreams about cooking lobsters.  Not just the simple put the lobster in the pot and boil kind of lobster dream, but the kind where the lobster would not die dream.  Its red pinchers wavied at me menacingly from the kitchen counter, as it had its last stand before meeting the boiling sea.  My alarm woke me up because I had a writing assignment to finish, but I found it hard to transition from meniacal crustraceans to a recipe involving rice and cool whip. Then the roosters started crowing. 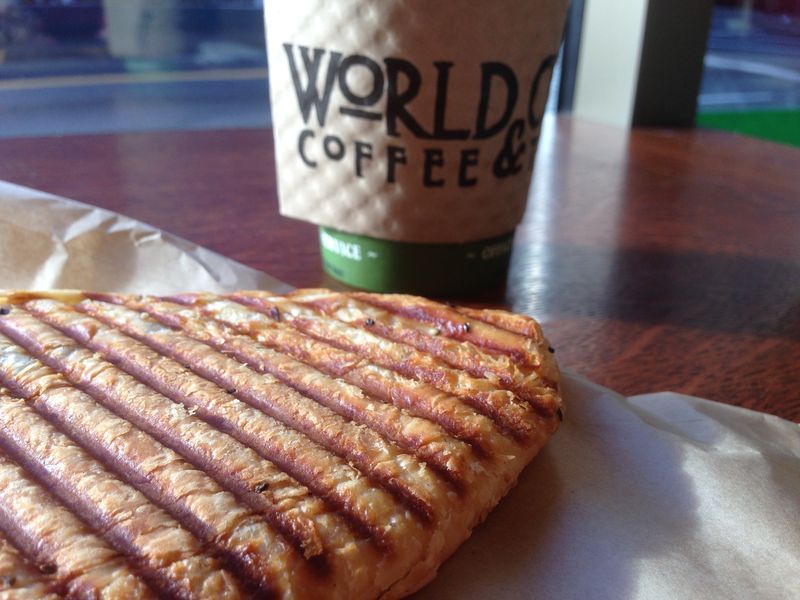 "Its illegal to have roosters in the city, but my neighbor just doesn't care. He had three of them until recently."  My Airbnb host shared as she made me an espresso and I head-butted the cat Rose to show her some good morning cat love.  The roosters then started to croon in a fashion of some type of super-amplified air from the end of a balloon scream.  It was lovely, and definitely a sign that it was time to drive into town and get to class with my poem/story/recipe about the odd Minnesotan dish known as Glorified Rice and just woman-up to its weirdness.

I also needed food.  I made a beeline for the area where The Literary Arts center is located an found an amazing deal on parking just across the street from Powell's World of Books, and despite everything I could musster I was drawn into its labriynth of dead tree pulp glued between two pieces of cardboard.  Motivated by hunger I chose the coffeeshop over books and enjoyed a lovely savory crescent with another coffee as I stared out the window into the sunny Portland morning wondering whether my partner made it to Duluth Ok the night before and if his mother was alright. 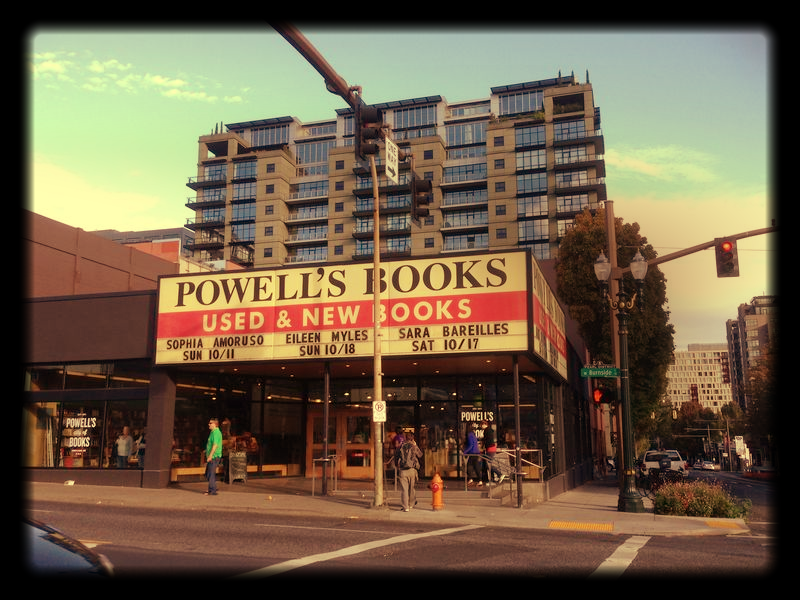 After my somber thinking spell I walked to class appropriately caffienated and strangely nervous to share my work with my fellow food writer colleagues.  The morning after flew by, and before I knew it it was pouring rain outside and we had to choose lunch from the food cart jungle across the street.  Umbrella from the courtesy umbrella pot in hand I made an entire circle of the food cart block across the street, purposely not allowing myself to stop at the first thing that caught my eye for fear of missing out on some other glorious treat around the corner.  I passed up macaroni and cheese with bacon and brocolli, shrimp etouffee, gyros, and tacos, and even the grilled cheese from the evening before – and landed on, of all things, a chicken salad sandwich. 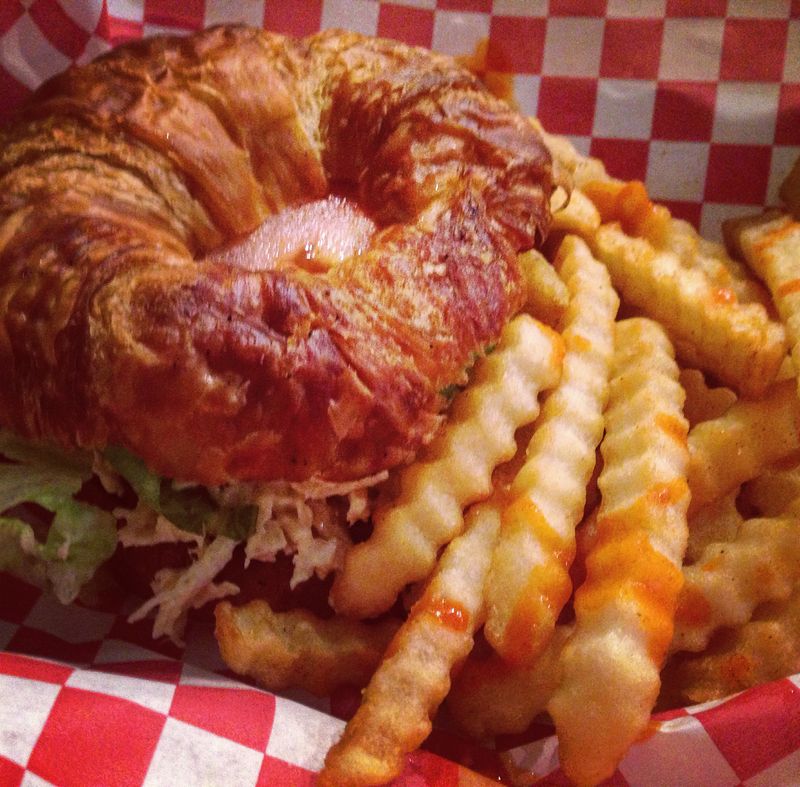 Cluck Truck PDX had me at pickles in the chicken salad.  Yes, it was another piece of bread in a day starting with bread, but it was raining, why not.  And talking about food writing and free writing about food makes a woman hungry.  The french fries were the crinkle kind that held the hot sauce just perfect as I splashed it on and carried it beneath my now tuliped backwards windblown umbrella across the street and back to the writing table to chat about the business of food writing. 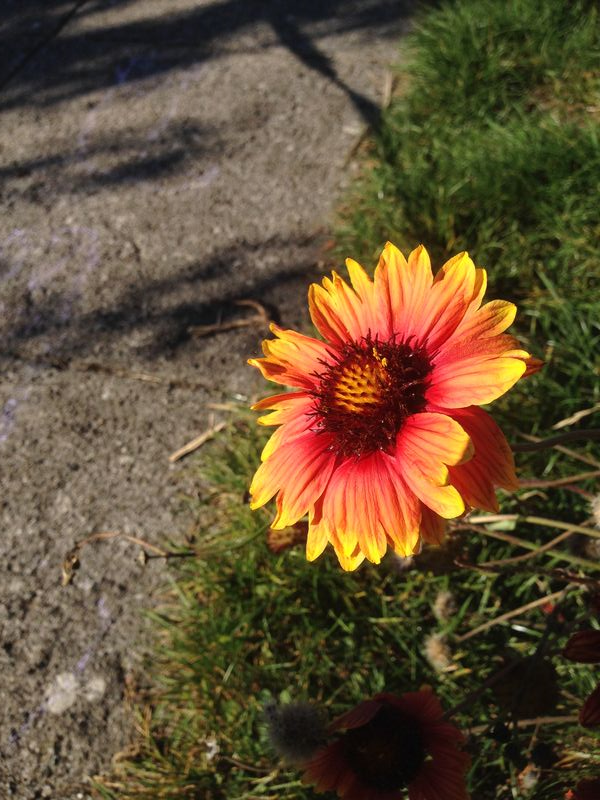 When I get sad, or nervous, or anxious I eat.  It is a pretty normal human response to stress.  I find that when I am happy and experiencing gratitude I take pictures of flowers. Somewhere in this now very wet afternoon in Portland I experienced the gamut of joy, gratitude, sadness and anxiety – but at the end of the day my poem and recipe about glorified rice was glorified, and my idea about a food truck was cemented into this world as not a radical idea, but a good idea.  I celebrated over a beverage with my fellow poet turned food writer friend and teacher across the street after class – now the hard part, bringing it into being. 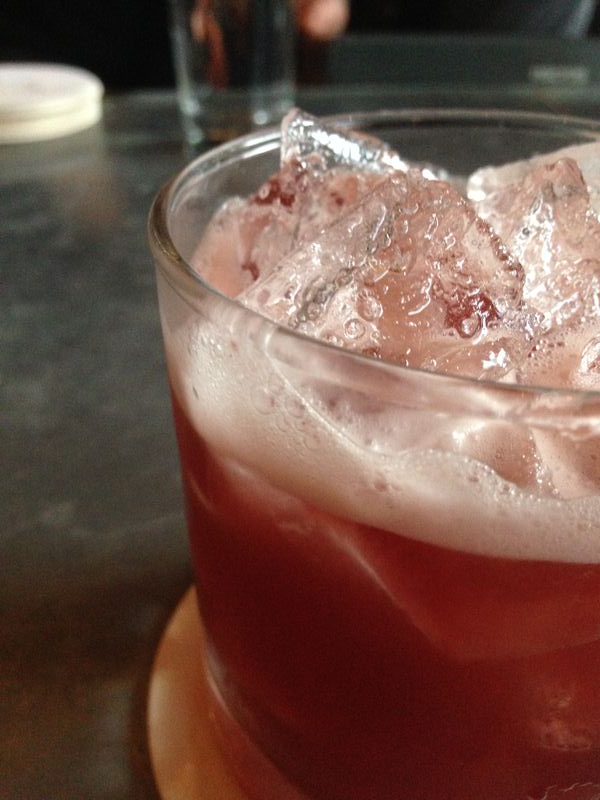 I decided to ponder this among the halls of cookbooks currently located inside Powell's.  An hour and a half later I was manuevering a stack of food memoir in my hands, as well as a nose-to-tail cookbook, and book on making wines out of your herb garden.  It was time to go before I found other things. Furthermore, it was time to go to Ox (the legendary Portlandia Argentinian restaurant) all by myself ready to wait for an extended period of time to get in on a Saturday night at dinner rush.

The last time I tried to get into Ox over a year ago I had two hungry and inpatient men in tow who didn't understand the importance of waiting for a good plate of food from the most recently annointed best new chef.  Now, traveling completely alone with nothing but a pile of food memoir to accompany me, it was time.   I had no time limit.

I drove across the bridge, found the restaurant, parked my car and scurried through the drizzle to the front door of Ox with my biggest smile and an extremely full bladder.  "It is just me, and I'll wait as long as it takes to get a table."  I told the hostess.  She smiled back and said it would be at least a two hour wait, "But feel free to go have a drink in the bar next door and I'll text you when your table is ready."  I nodded and beelined it for the bathroom afraid I was going to have a 4-year-old moment in a very adult world.  As I stood outside the bathroom praying for relief I noticed the tiny framed chef jackets stating the names of the now two highly heralded chefs that grace the halls of this Argentinian meat fest of an establishment.  My guess – the men who fill those coats are not the size of barbies, and both of them actually learned to cook from their mother. 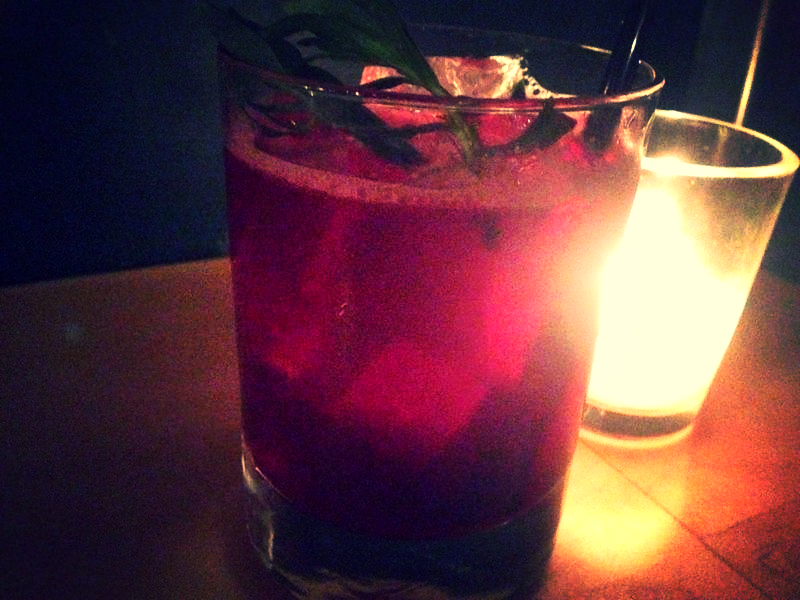 Whey (the bar attached to Ox) was so full I had to squeeze into a corner by the napkin/glass holder.  It was kitty corner to the bar though so I got immediate service and ordered this drink called Bull's Blood.  It featured beet juice, bourban and tarragon – three things I love.  After about thirty minutes the space began to clear out and I was able to spread out, write a bit and ponder another drink.  But then my name was called via text message to meet my food experience. 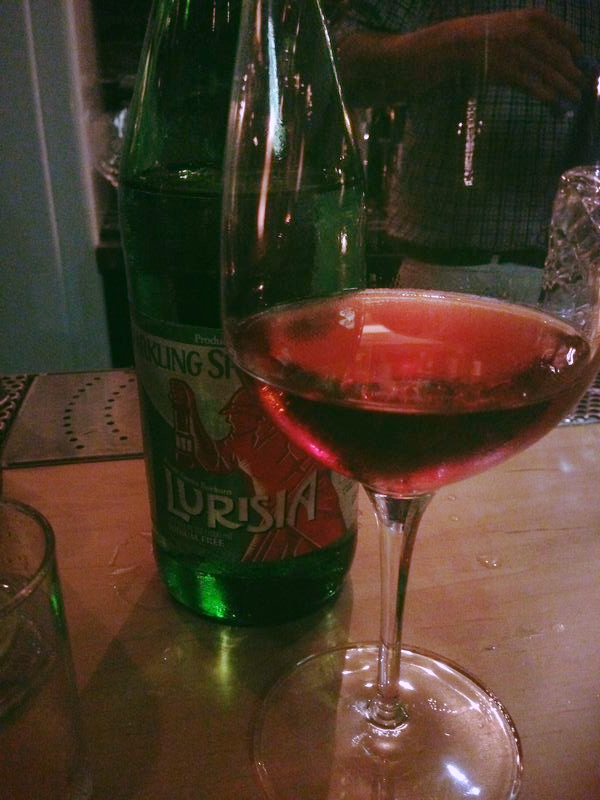 My Ox experience started with the best Rose' of Tempranillo and was followed by a homemade cream of mushroom soup "from the chef." 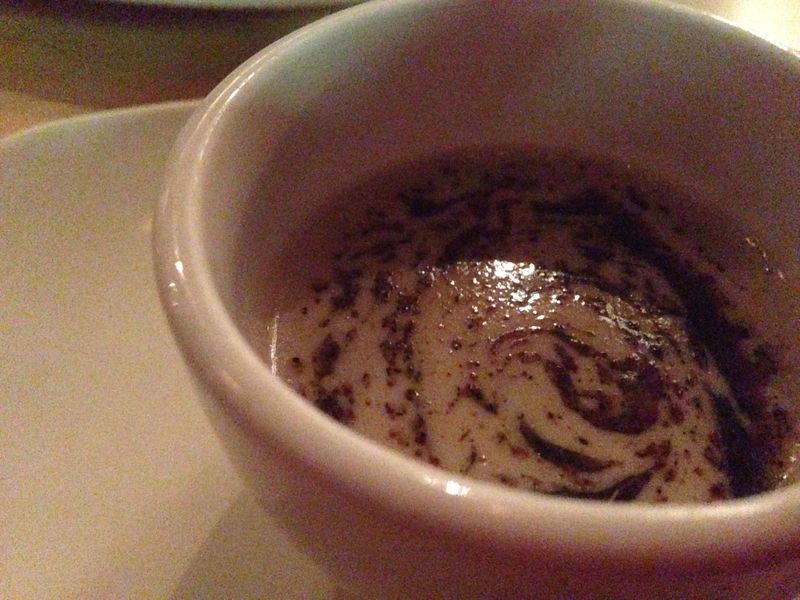 I don't know what chef actually makes cream of mushroom soup – but I had to give up all judgment and admit it was amazing.  And so in theme with my Minnesota food thinking – I took it as a sign that a staple of Minnesota cuisine could find me even inside a fine dining, heralded chef, argentinian food experience.  Meanwhile, I studied the menu and asked many questions as I was faced with the age old eating alone quandry- what do I order that I can actually eat when I want to try some of everything? 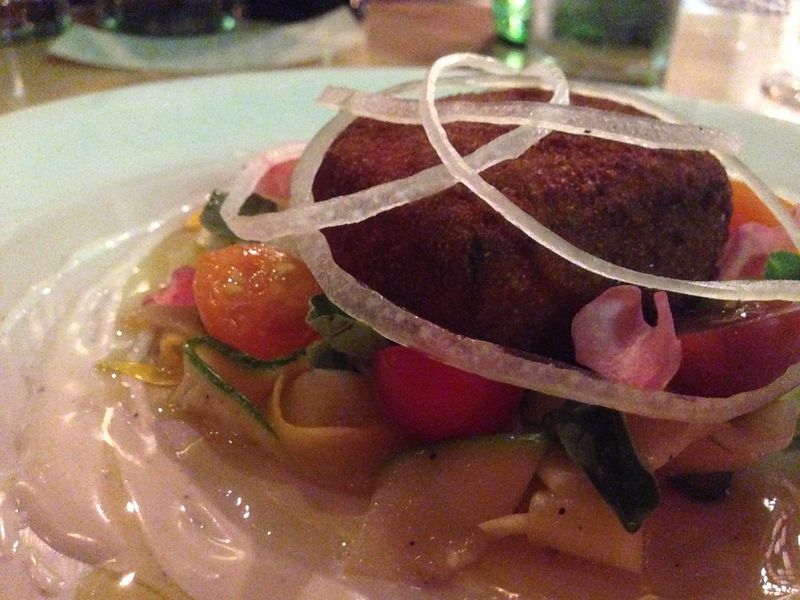 I found oxtail terrine on a bed of zucchini followed by 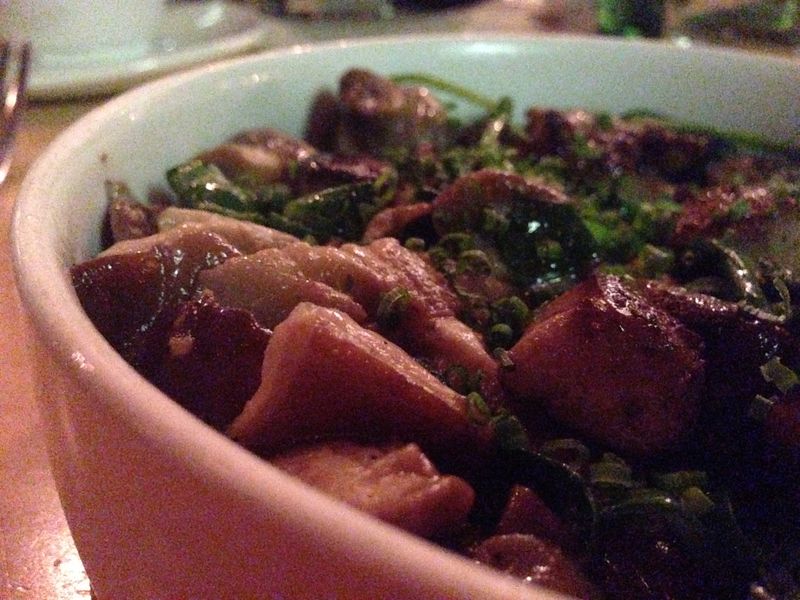 mushrooms, spinach and foie gras – so yummy and so filling.  The oxtail was a tender pocket of flakey umami heaven dancing on my tongue cut with the subtle water of the zucchini and tomato on the plate.  The foie gras and mushrooms was a sultry follow so rich, so smooth, so amazingly hard to tell the difference between the mushroom and the foie gras.  And all of the above was so the killer of my cell phone.  I took this picture and instantly my iPhone 5 died in my hand.  I was at the mercy of the bartender to find me a phone charger so I could GPS myself back to my lodgings. In the meantime I found myself in the company of my third and final, now unphotographed course, unable to take more than one bite. I ordered another glass of wine and contemplated how I might order an Uber without my cell phone. 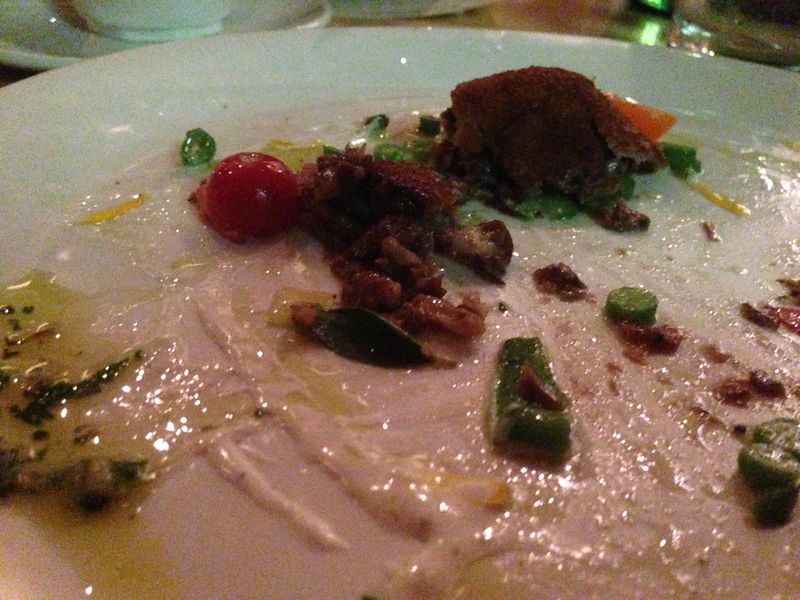 This is when I learned my bartender was starting a potato chip company and also a huge fan of Anthony Bourdain. Eventually my phone was resurrected so the GPS could work, and I could make my way back to my temporary family of cats and dogs in Southeast Portland.