So it was Saturday, the final day of our Oregon adventure – it was time to do Portland brunch right and then drive out of the city to see what natural wonders the Columbia River Gorge had in store. 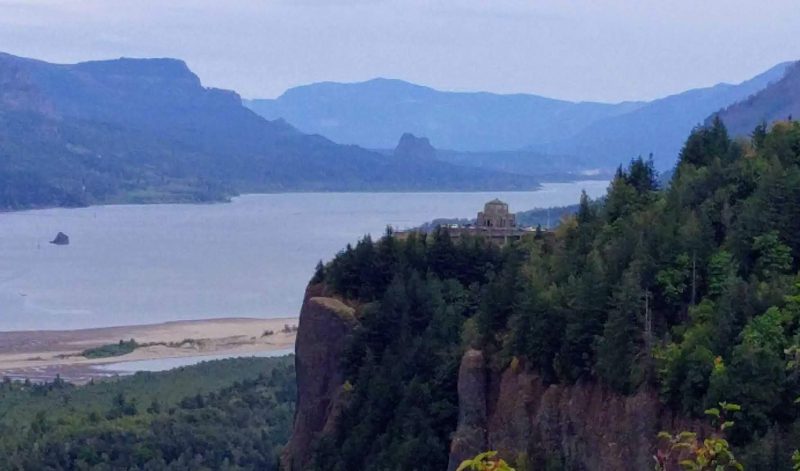 We got up early to do Saturday brunch proper – that is so we could get in line. This is what watching six seasons of Portlandia taught me (plus some personal experience). If you want to go to the right place, brunch and line waiting  is necessary in Portland. We chose to go to Tasty & Sons for brunch – which was popular 4 years ago.  Could it still be popular today?  Yes, in fact it could. 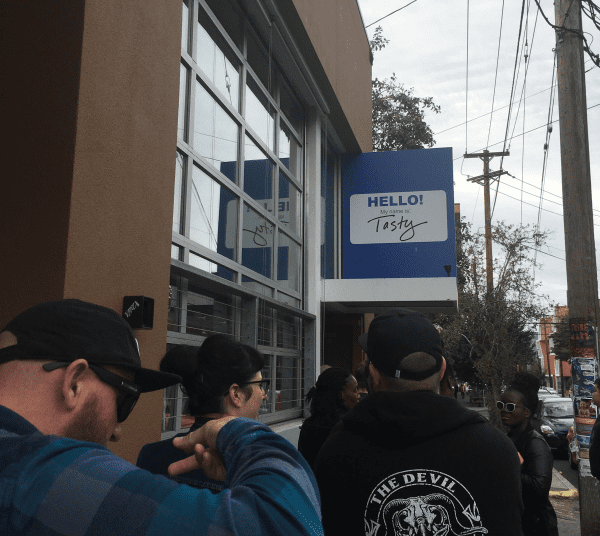 We got there at a quarter to 9 and the line was long. It didn't help that there was table of 12 asian ladies who had the ability to skip the line and stand in front of everyone. They did not go unnoticed, and they were all carrying canvas bags and nametags from the foodie conference in town for the weekend. The locals and line waiting tourists were not impressed with their line jumping. 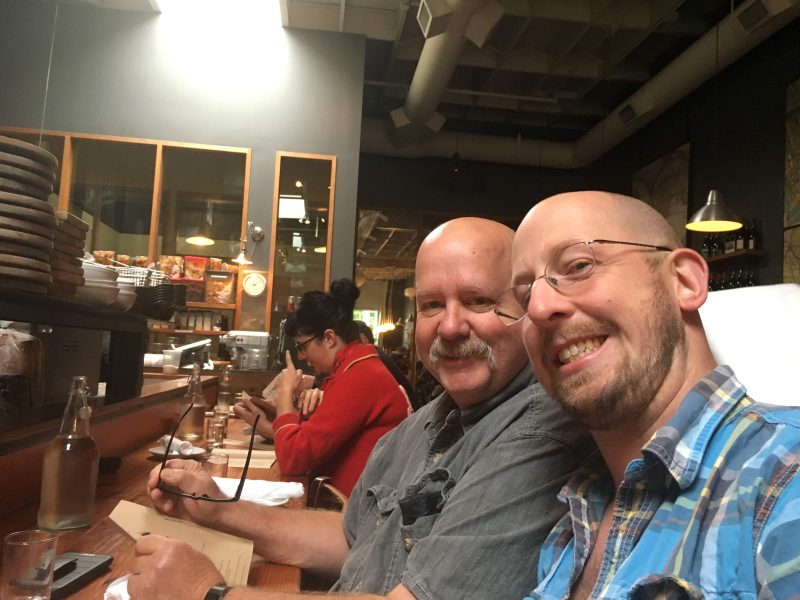 We got in on the first seating regardless of the problematic Asian lady situation. Our seats had a direct view of the kitchen and some fellow to our right who was seriously OCD (but very nice). The food was tasty. Ha! But for real it did taste good – even my bacon, lettuce and fried green tomato "sandwich" – which wasn't as ideal as I hoped (reminded me a bit of a McDonalds fish filet for some reason) but you can't order right all of the time. 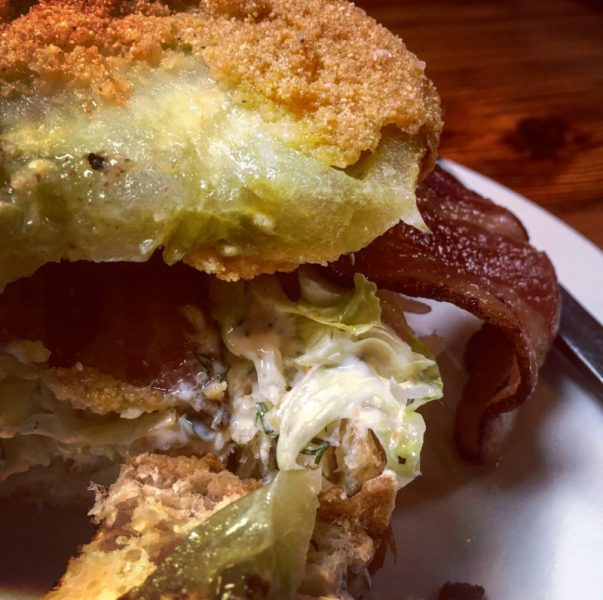 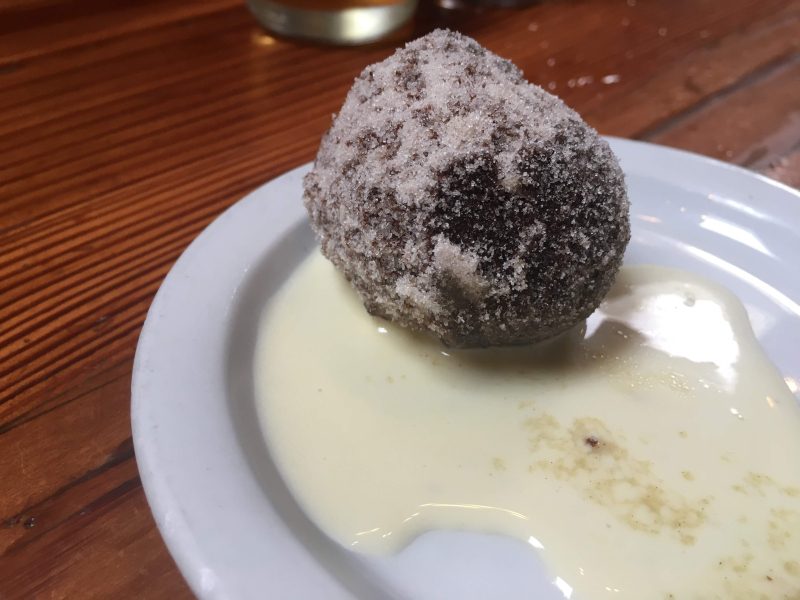 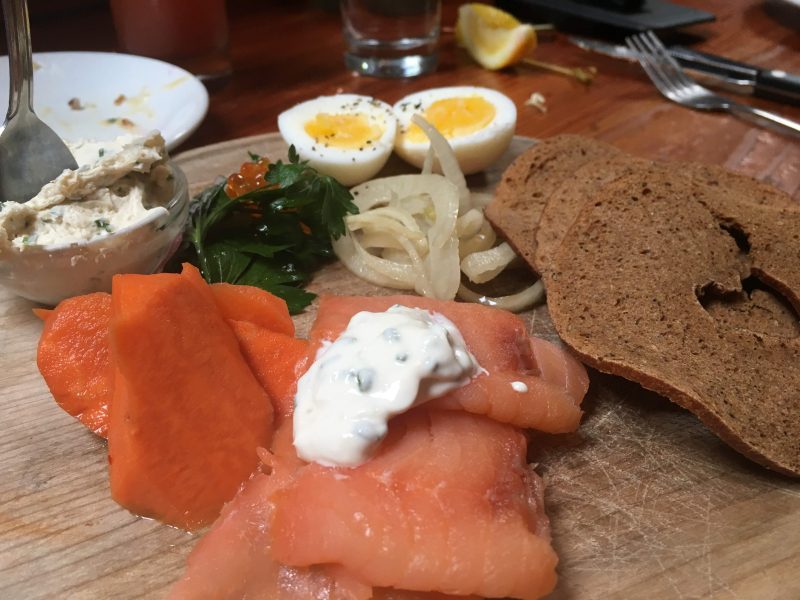 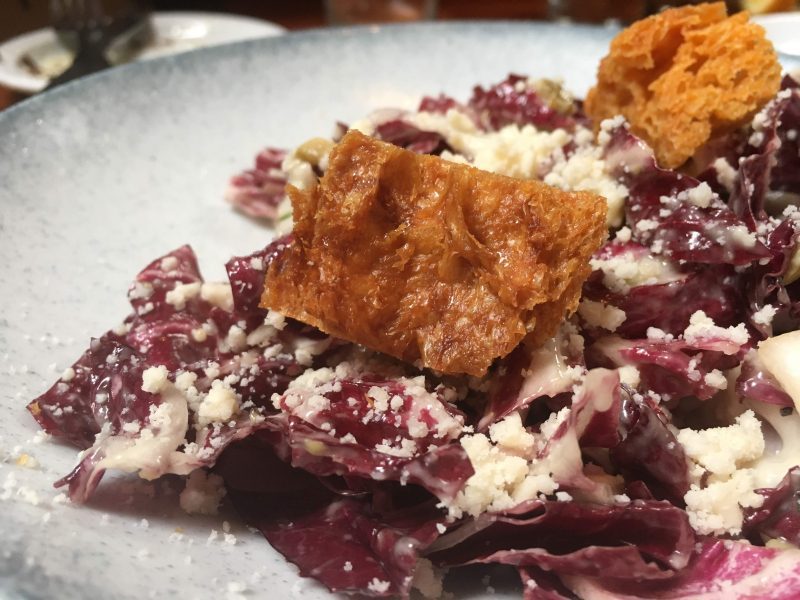 Then we were off into the great beyond of the Columbia River Gorge. After I got a little more coffee and out of yet another ridiculous Portland line that is. Then we were off to see pretty views and waterfalls, and one bridge and one dam with a fish ladder. 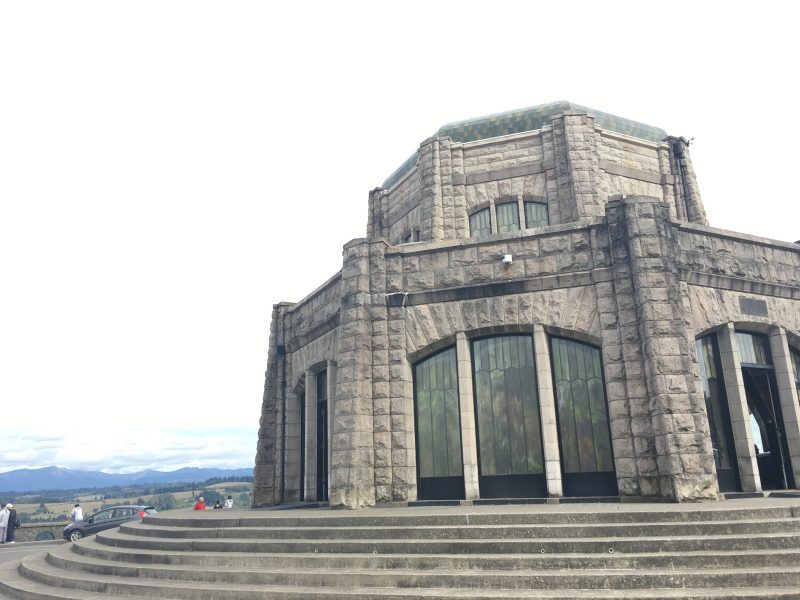 Our first stop was this place -Vista Place. A strange little bit of architecture and stained glass perched on a ridge in Corbett, Oregon overlooking the Columbia River. It really does have a vista of all the geological phenomenon. It is also quite busy and hard to take pictures without people in them because of the constant stream of humanity coming in and out. 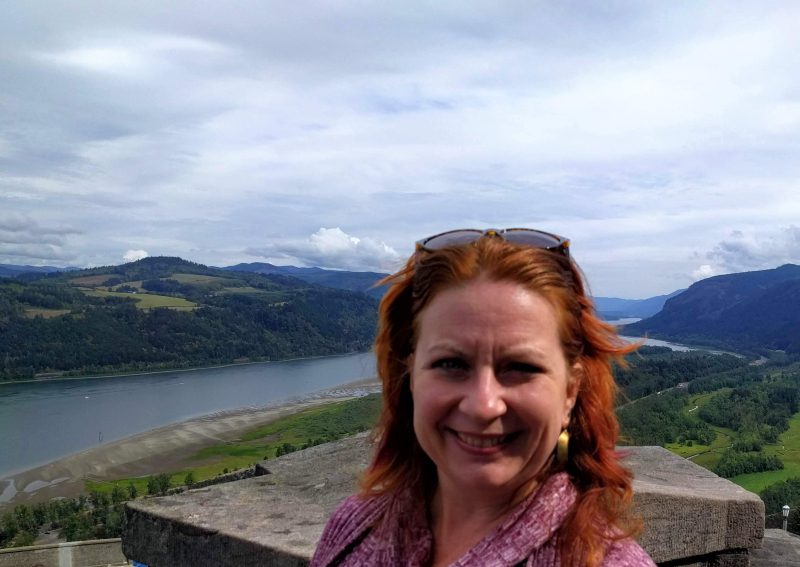 Here is a shot of me with new red hair next to a giant crevice in the earth (see Arizona photos from February 2017 for another example).  I've been enjoying being a red head again thanks to my two talented colorists name Jodi/Jodie. Jodie with an "e" finally gave me the pink stripes I've been asking for for a while – you can almost see them here.  But I digress and speak of myself – let's move on to the town of Latourell, named after someone in my extended family ancestors.  According to my Grandfather Ken Latterell, everyone with the name Latterell is related in this country and Canada – it doesn't matter the spelling – we all come from the same line. Grandpa was a doctor and spoke with great authority on all things, so he must be right. 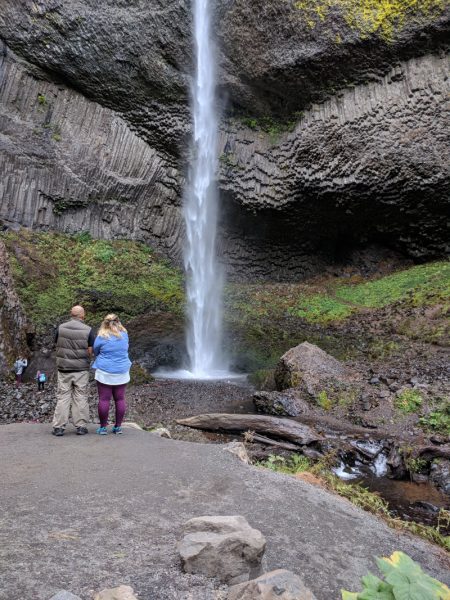 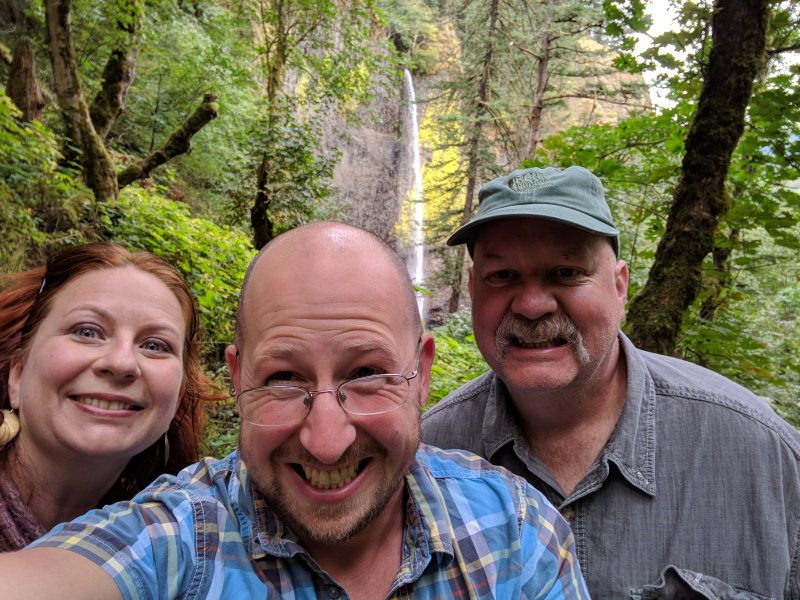 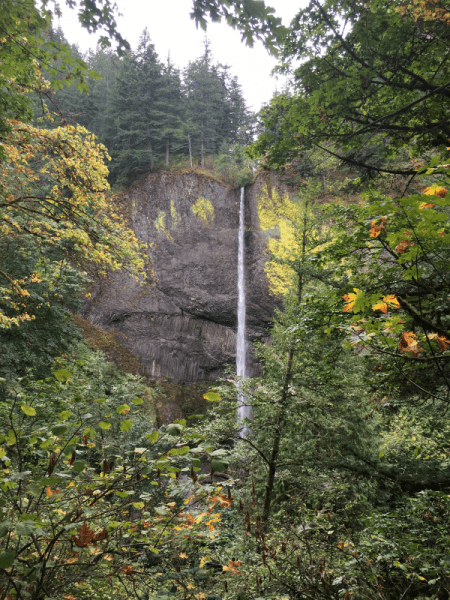 Latourell Falls is "unique among the best-known Columbia Gorge waterfall, in the way that it drops straight down from an overhanging basalt cliff." I want to say this is the way that most of us live – unique among the many, fearless and willing to jump right off the cliff into the unknown. And I'll save the but because there isn't one, my clan is unique, tough and our waterfall is "an excellent example of columnar basalt formations." At least according to Wikipedia. The town on the other hand is a ghost town and peaked in the 1880's – so not much to say there – Joseph "Frenchy" Latourell is famous for being the local postmaster, having eight children who sang and dance for visiting Portlanders, and owning a fish wheel. The force is strong in my family. 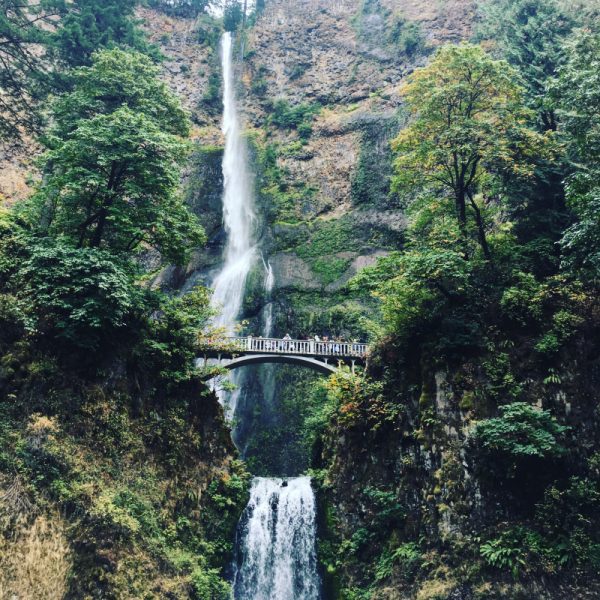 Just down the road is Multnomah Falls – a famous waterfall immediately accessible from a parking lot in the center of Interstate 85 (which is weird). But it is still beautiful. 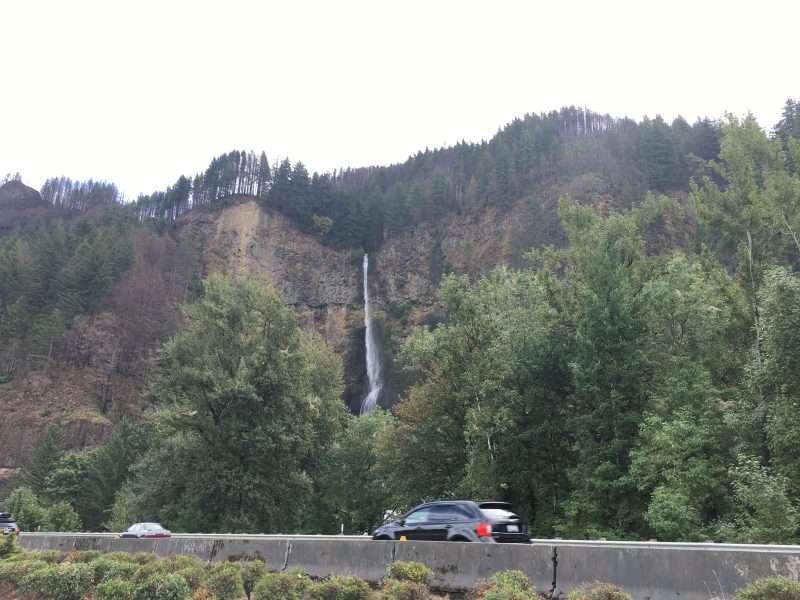 Multnomah Falls and its lodge (constructed in 1925) is the most visited natural recreation site in the Pacific Northwest, with over 2 million visitors per year. Less known than its observation deck is the native lore surrounding it – a story of a beautiful daughter of a chief who sacrificed herself to end a plague by jumping off the falls. 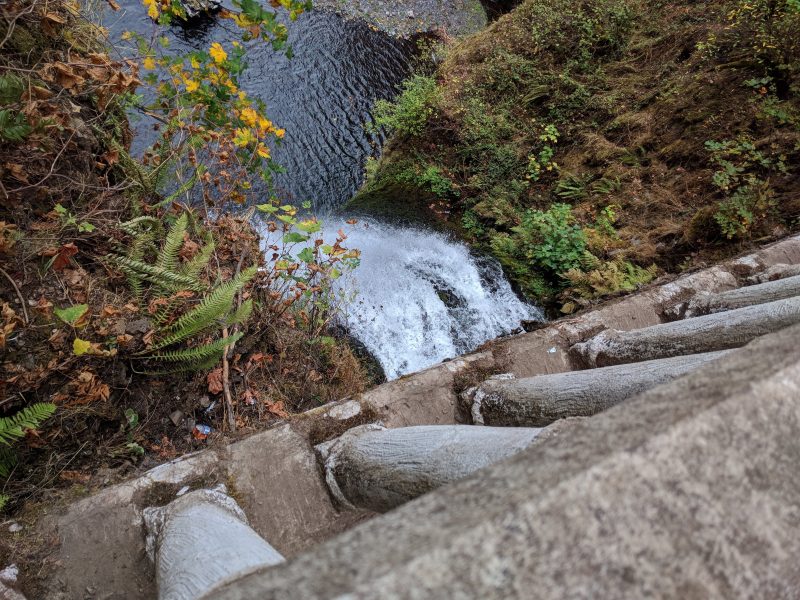 I'll leave that story right there and move on to the dam with the fish ladder. 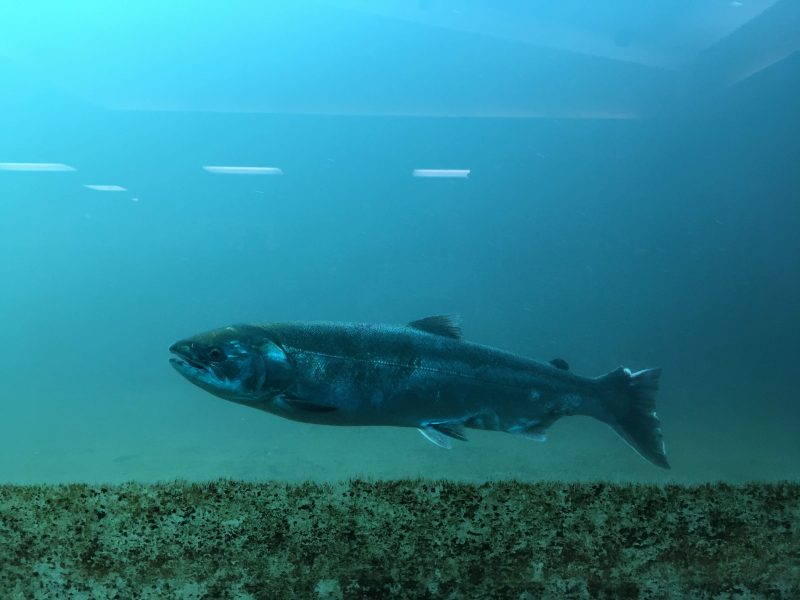 This salmon is climbing the river with the help of this "ladder" technology – because humans put a darn cement block in the middle of his natural instinct. 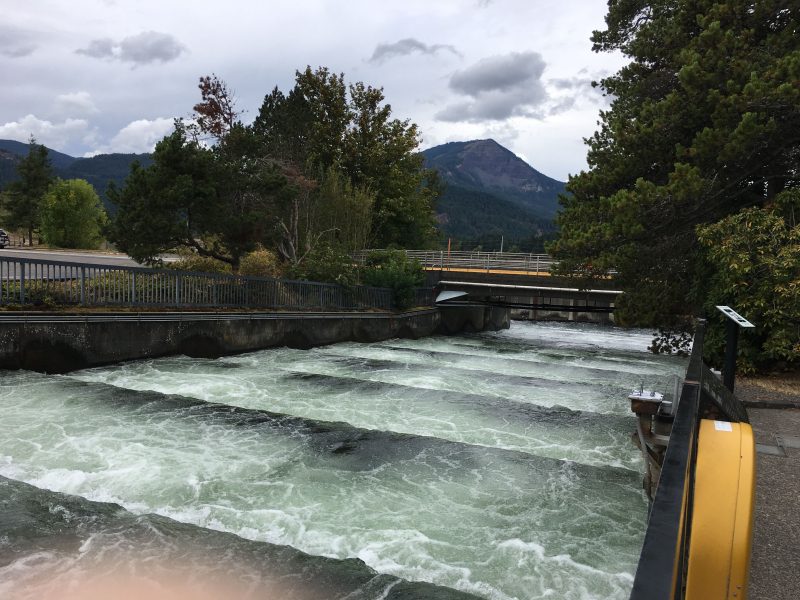 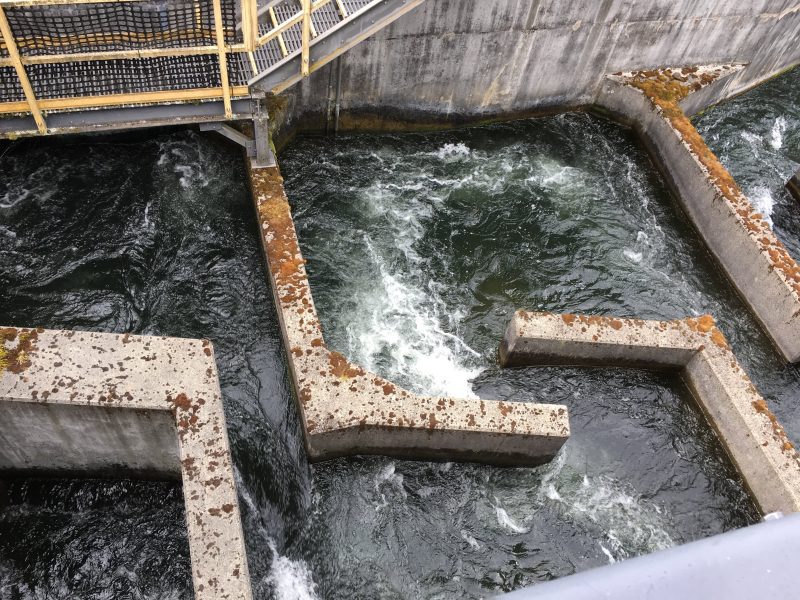 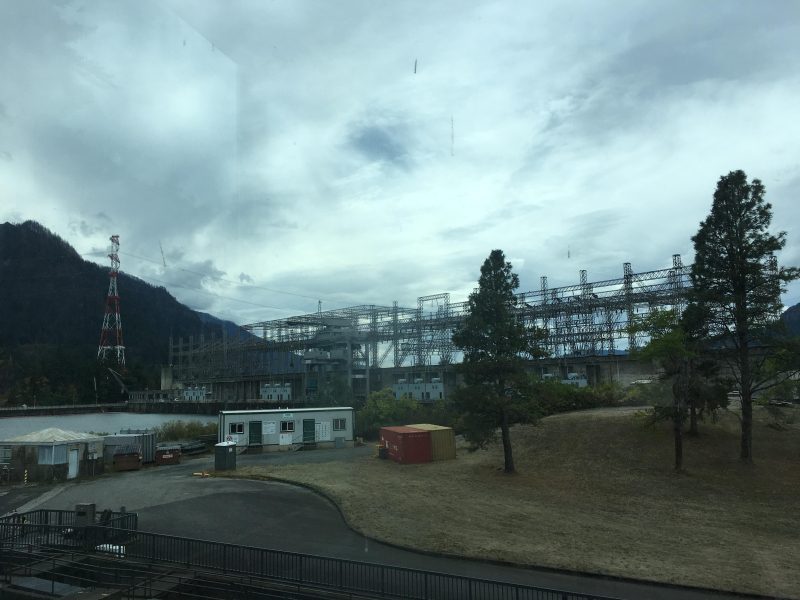 Science and industry splattered all over the natural landscape that is what a dam is. When I still lived in Minnesota and had no clue about big hydro-electric dams, Sherman Alexie came to Minneapolis as an opening act for the Indigo Girls. In one of his spoken word poems in that performance he said this line I cannot ever forget (because he said it over and over and over again) "Every time you turn on a light, a salmon dies, a salmon dies."  I was so confused. I knew nothing 20 years ago about dams, nor the plight of the Pacific Northwest salmon being a freshwater midwestern kind of girl. I did however, always make sure to only turn on lights most sparingly, for fear of killing poor salmon. Coming full circle now I found myself looking right at the dam and the damned salmon swimming upstream on a man-made ladder – and the first words that came to mind were "Every time you turn on a light, a salmon dies." I'm sorry salmon. 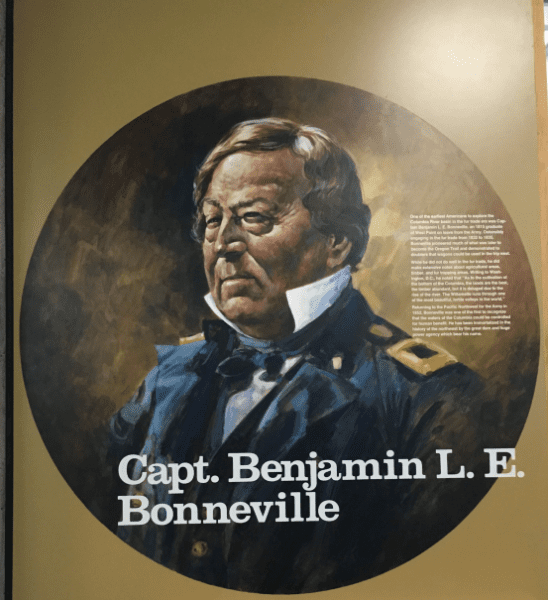 The Army Core of Engineers visitors' center at Bonneville Dam did have a great educational exhibit and gift shop. I almost bought a stuffed salmon for my niece – it was very cute, and potentially educational. Instead, I got her an instruction book on how to tie knots. Way more practical – and I purchased the story of Sacajawea (allegedly based on first hand journals from the journey West) for my mother.  The exhibit had detailed information about those who took the Oregon Trail and the perils they faced crossing the Columbia River at this location among other things, and information about the technology we were sitting on that were not as interesting. We moved on to the Bridge of the Gods.

Which is a toll bridge and not really that super interesting to look at. The location is actually more important as it is in the place where native legend speaks of an actual bridge built by and for gods. It has been replaced by a very human version made of steal and concrete. 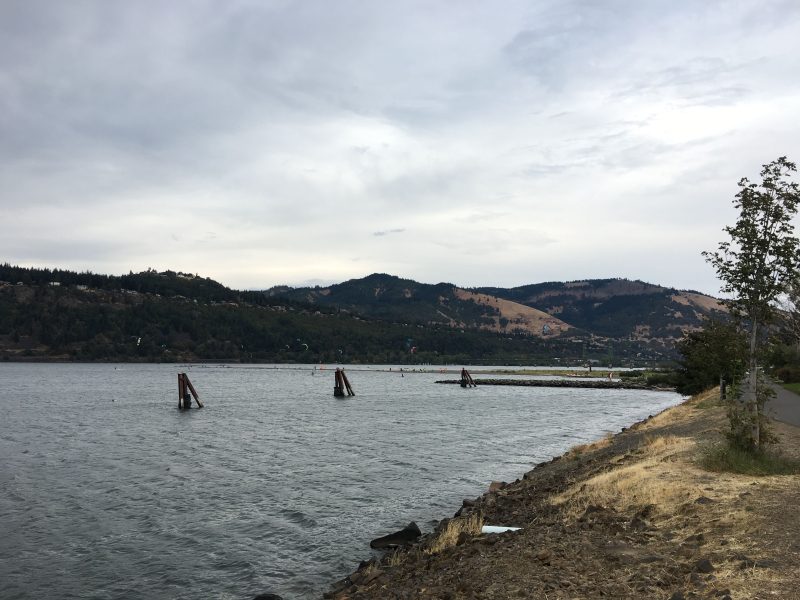 We headed for Hood River – a natural wonder of outdoor adventure and breweries.  Driving into to town all you could see was brewery signs. It is a wonder how anyone in town does anything there with so much beer to be drank.  Look at these really ambitious dots in the river in the photo above.  They are all sailboarding. 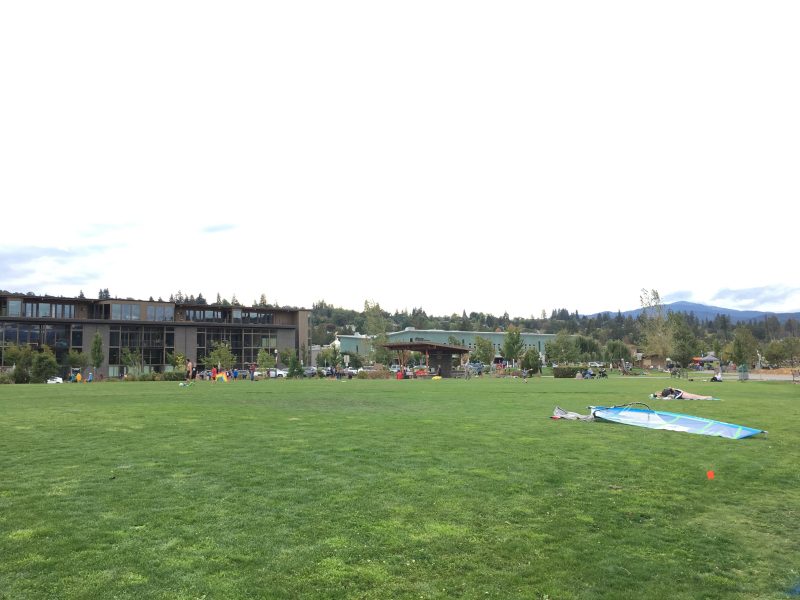 We settled on a brewery for dinner because a brewery was our only option. There was a really bad music festival happening at the time of our visit so there were many many people drinking many many beers and behaving as if they had done exactly that. We ordered poutine to start our last meal together in Oregon. It seemed appropriately heavy. 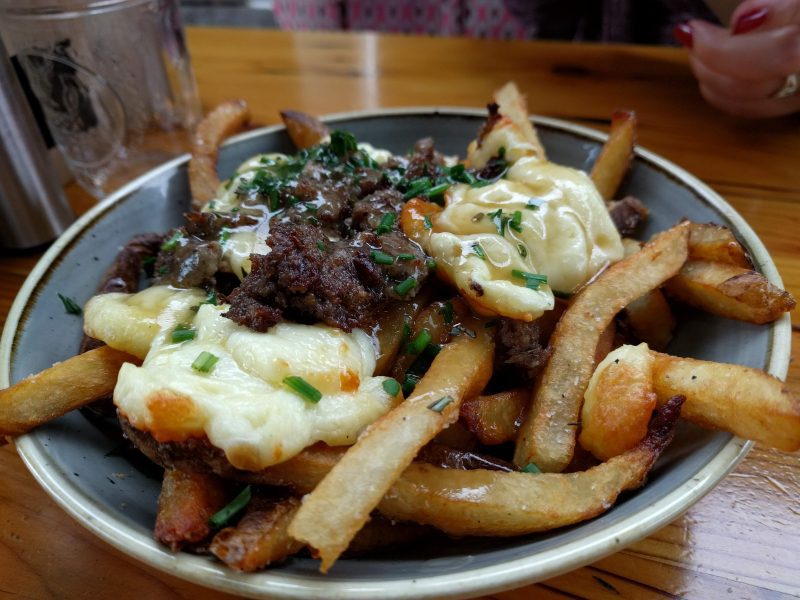 Then I ordered what I thought was steak salad, but turned out to be steak and potatoes with a little bit of frize lettuce. 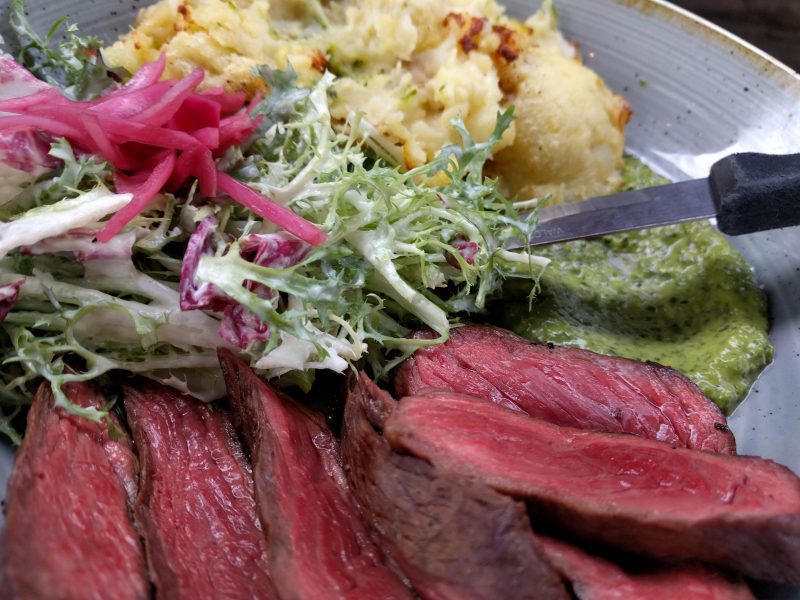 We had all the starch and the meat for our last meal together – and it was all really yummy and mostly lacking in vegetation. 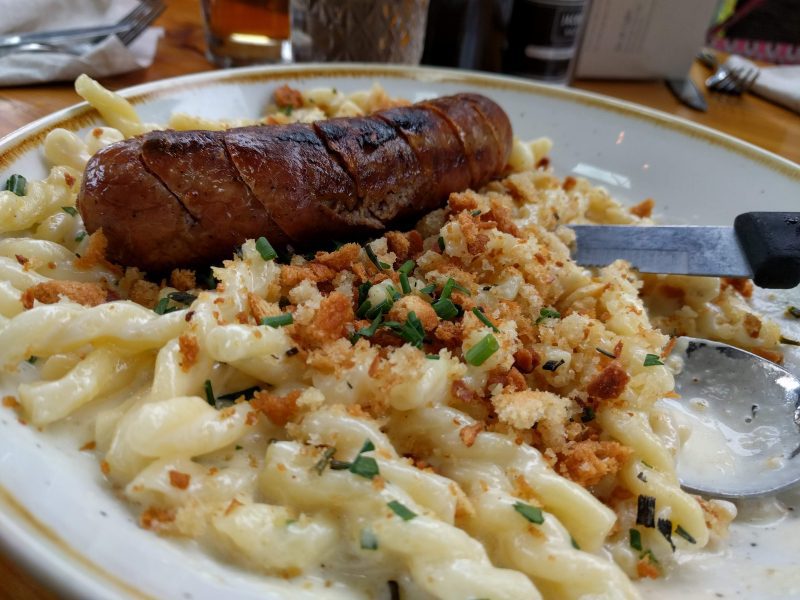 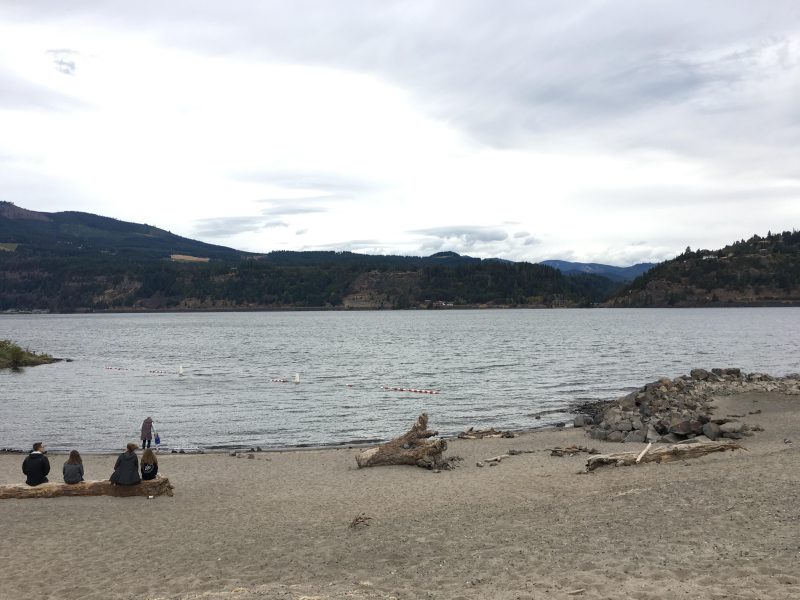 After one last look at the Columbia River we made our way back the way we came and relaxed in our little Airbnb in the backyard of a house in Portland. It had been a great vacation.