As much as I love the rolling hills and beautiful vineyards in the Willamette Valley – it was just one day on our journey. Other adventures awaited us in Portland so we got ourselves together for a good breakfast and another drive. 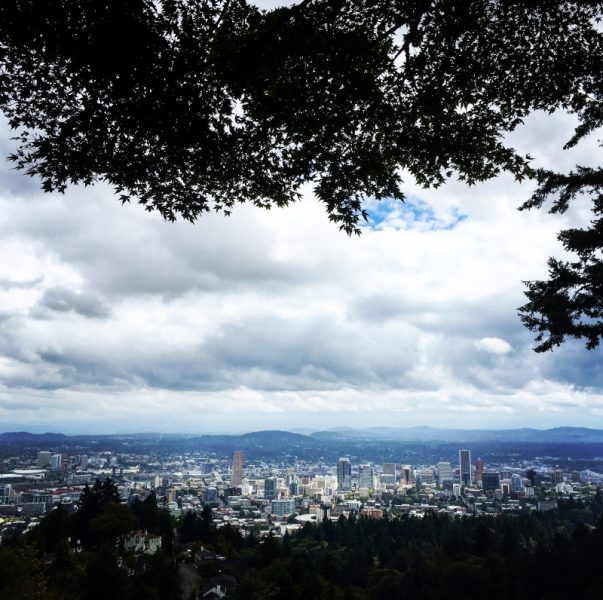 Luckily, it was still sort of the middle of the week so it was possible to get a seat and breakfast at the local Dundee Red Hills Market. A cute little establishment that makes tasty food and sells wine country stuff and things like picnic food items and gear, and towels with funny sayings on them. 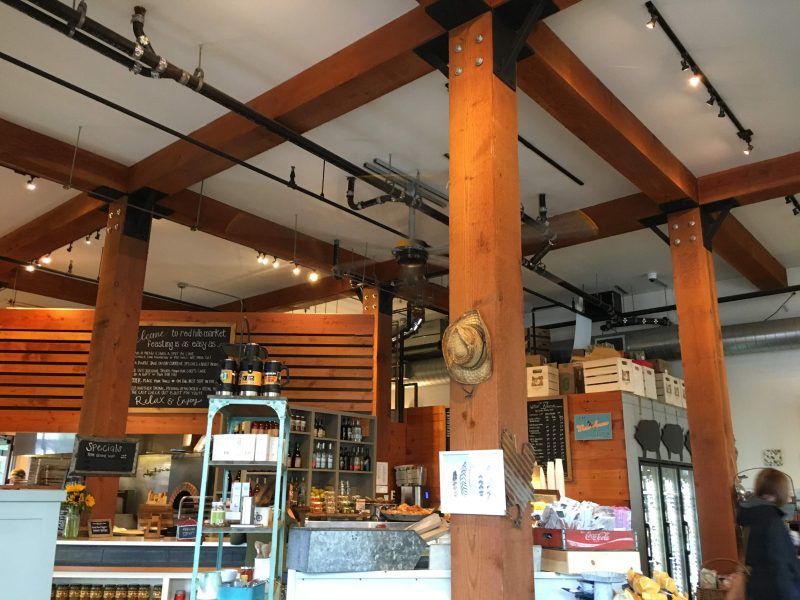 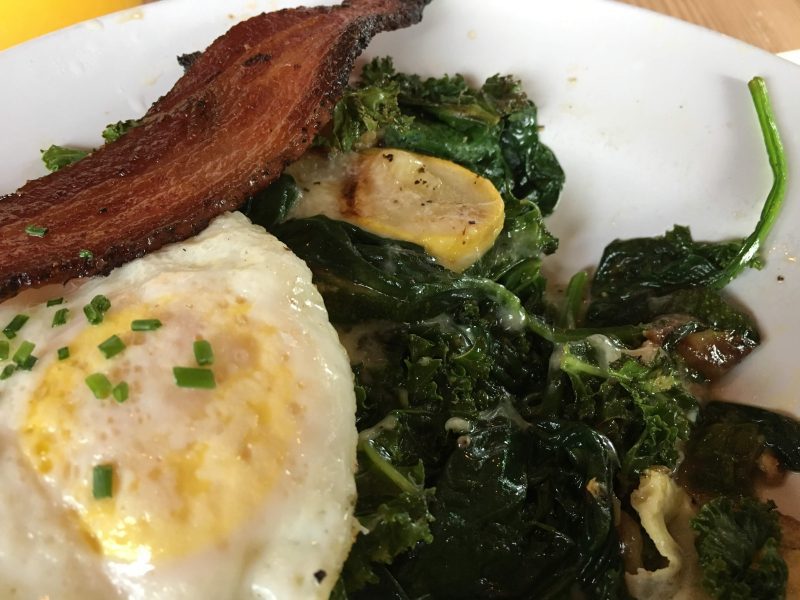 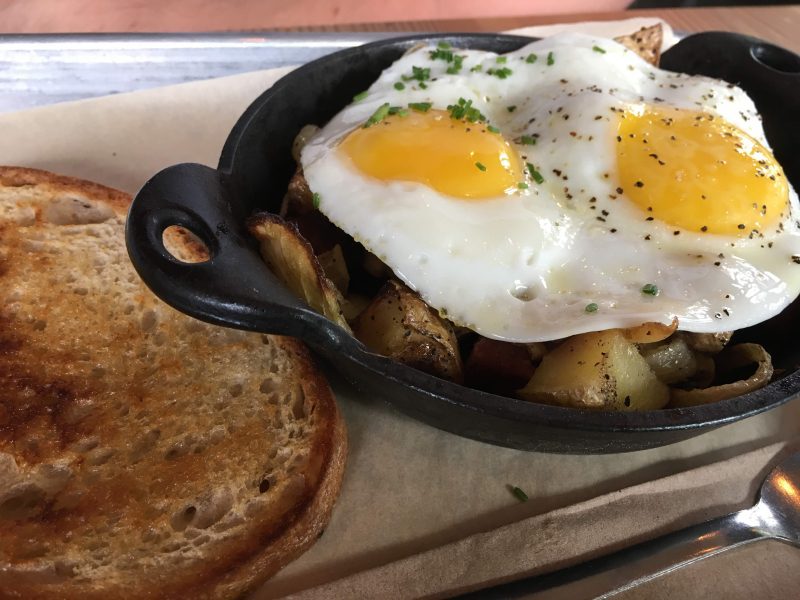 Still attempting to be vegetable forward, especially with Portland coming up and all of its food wonders, I chose to go with a kale breakfast bowl. The boys went a little heavier with hash and biscuits and gravy. But it would keep us going. It was also all extremely delicious – confirming why people wait in line for this on weekends. 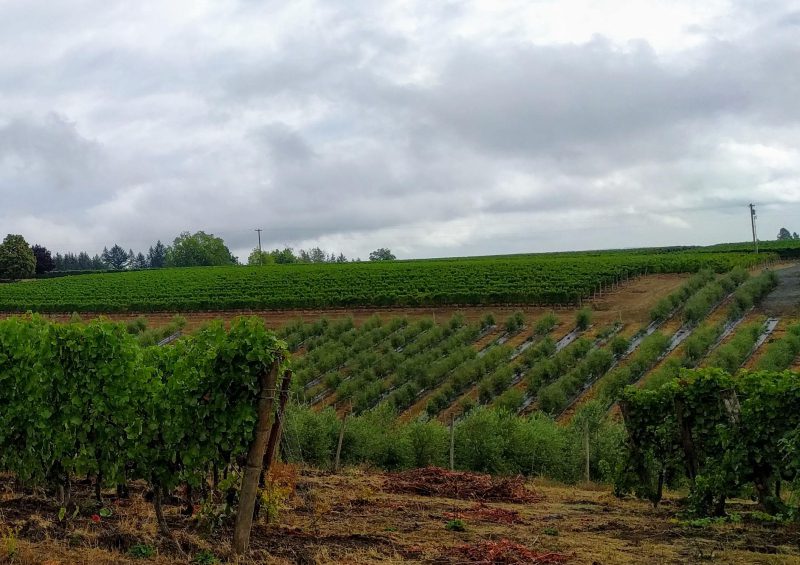 We made one final stop to get some vineyard photos now that it wasn't raining, and let Jeremy and Dan taste another take on Pinot Noir before we began our journey into the urban landscape. It was nice to get in some final rural and picturesque shots before we were assaulted with traffic, concrete highways and billboards. 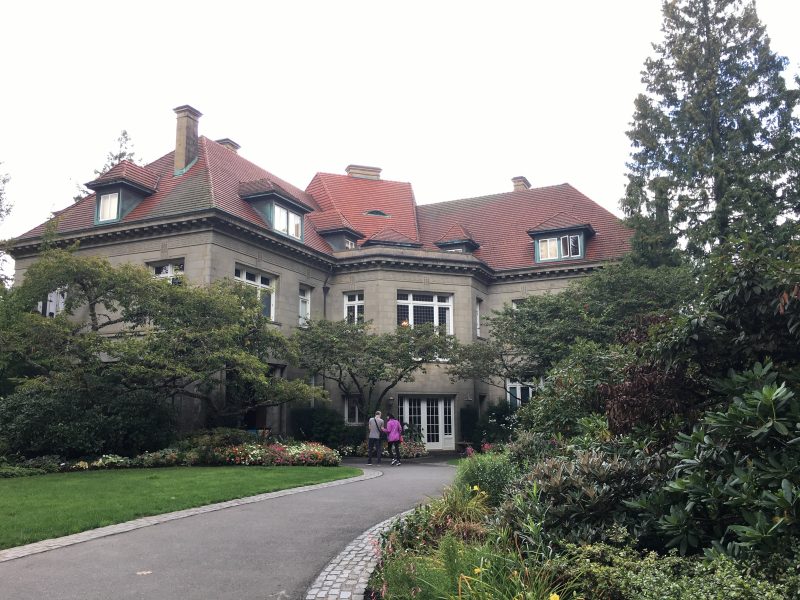 Our first sight in Portland was actually quite lush (once we got through the suburban traffic and into the right neighborhood). We started our tour of the city at the Pittock Mansion, the home of one of the "founding" or "most influential" members of Portland, the original owner of The Oregonian newspaper and avid outdoor enthusiast – Henry Pittock. Facts like the Henry's 3 climbs of Mt. Hood and his wife's arrival to Oregan via The Oregon Trail are found throughout the grounds and mansion, giving you a sense that the individuals who built it were both well-off and connected to the place they chose to build a state-of-the-art mansion for the times (it featured such things as elevators, refrigerators, and telephones connected to both phone companies. 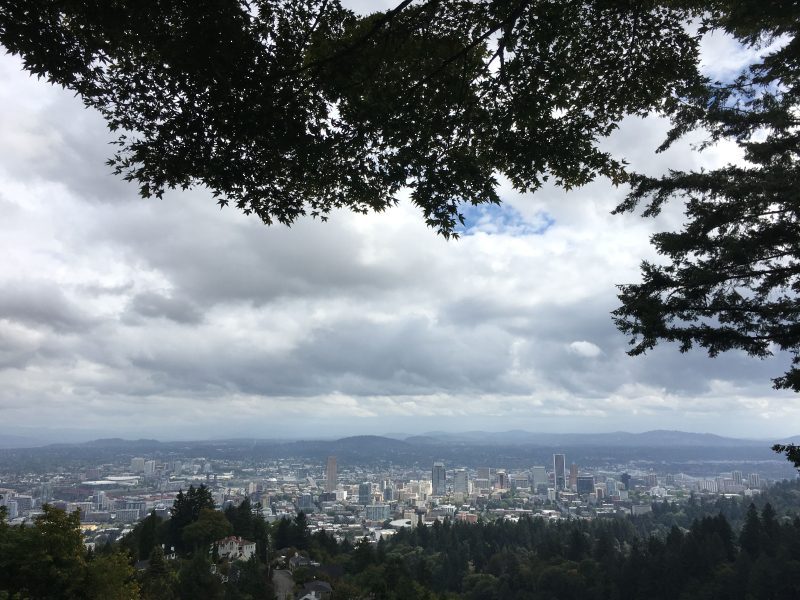 The mansion is high on a hill with a huge amount of grounds overlooking the now downtown core of Portland.

The grounds are also covered in roses and include an explanation at to why Portland is called Rose City. For the 1905 World's Fair that was in Portland all of the streets leading to the World's Fair grounds (which were completely removed and destroyed following the fair) had roses alongside them thanks to the Portland Rose Society's planting in 1889. Thus, the likely beginning of the nickname The Rose City. 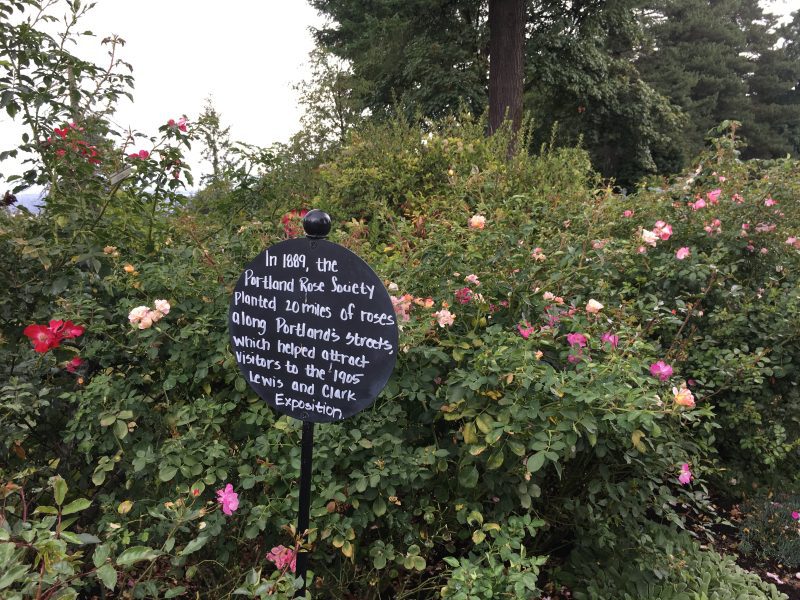 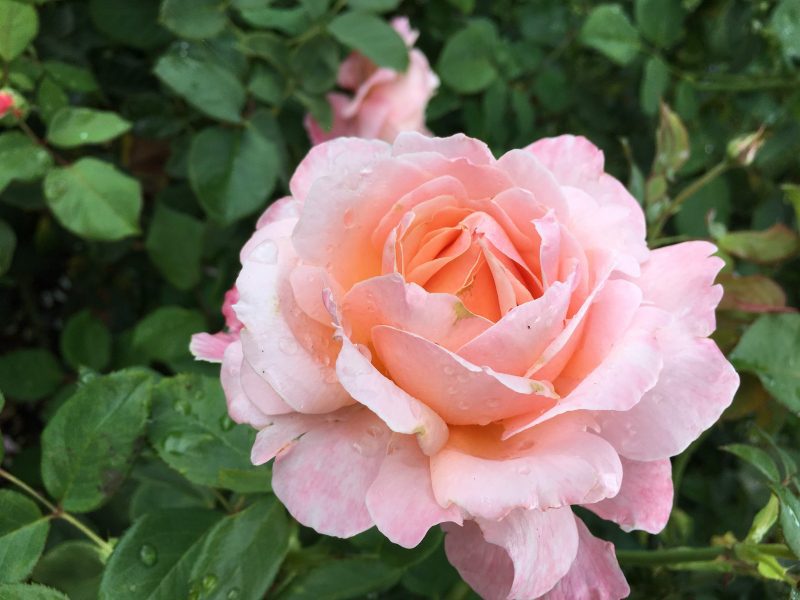 From the mansion window you can look out over the place where the grounds of the 1905 Lewis and Clark Exhibition would have been.  It is all downtown Portland now, with no sign of anything that resembles a large world fair like event. 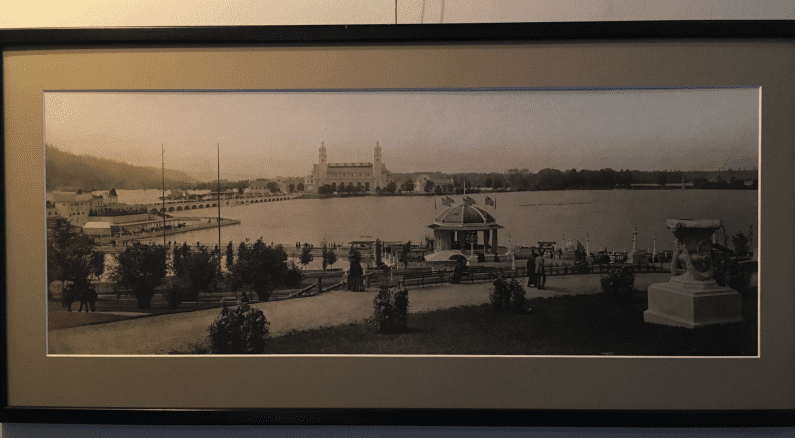 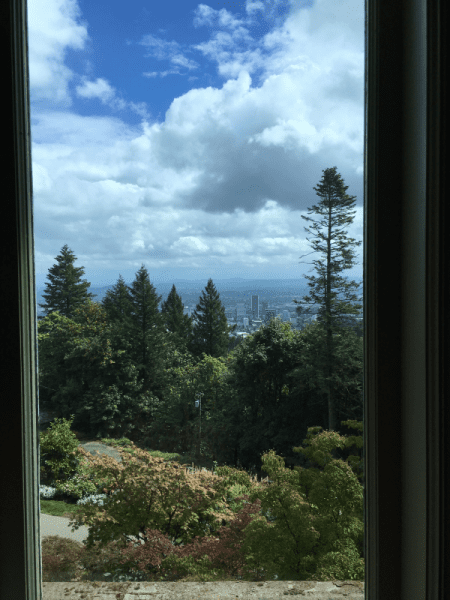 The lake was completely filled in and the buildings torn down. Traveling to Portland many times before I never knew that it was even home to a World's Fair. Any other city I've been in has a remnant. In Portland, the only remnants are here at a giant house on a hill far removed from the day-to-day bustle of the modern city, and its public transportation.

Like many old houses this one too had its moment were it faced the wrecking ball. In 1965 a group of citizens banded together to save it about 10 years after the last Pittock left its walls. It was preserved and has gone through a series of phases as far as how it "should" be decorated. Apparently, there was a debate on whether you tried to stay period or not. That debate is over and most of the pieces in the house are now period to Henry Pittock's time, albeit not his.

As much as there were rooms filled with old furniture and cool paint and wallpaper, I was obsessed with the staircase. 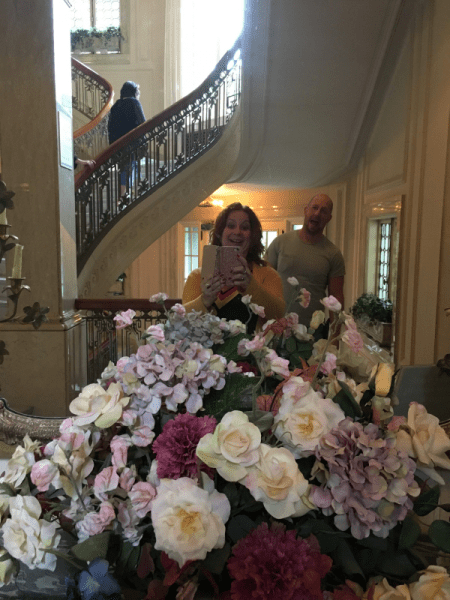 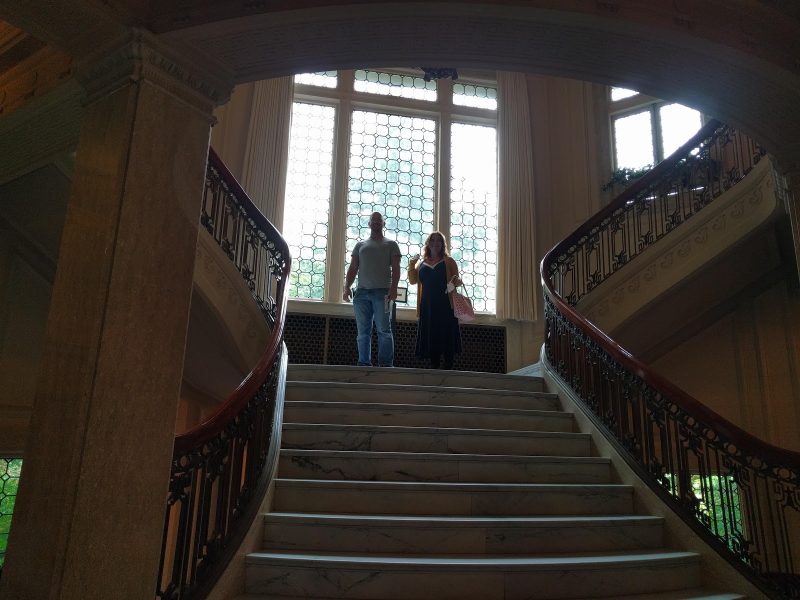 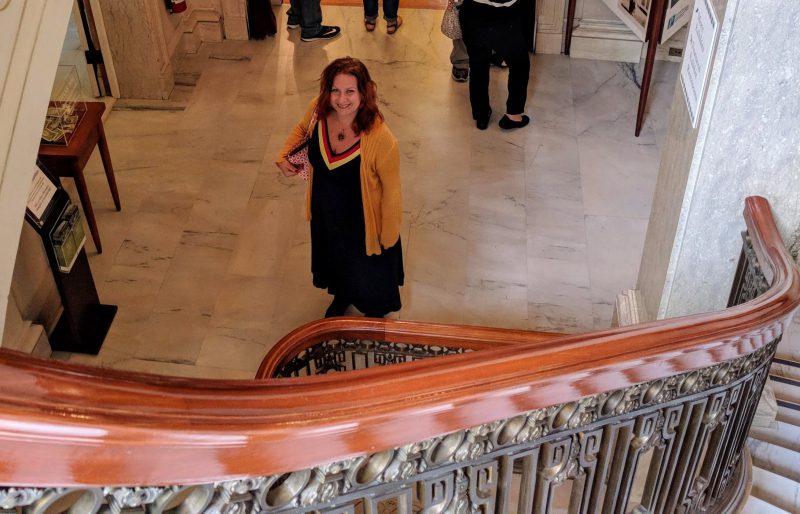 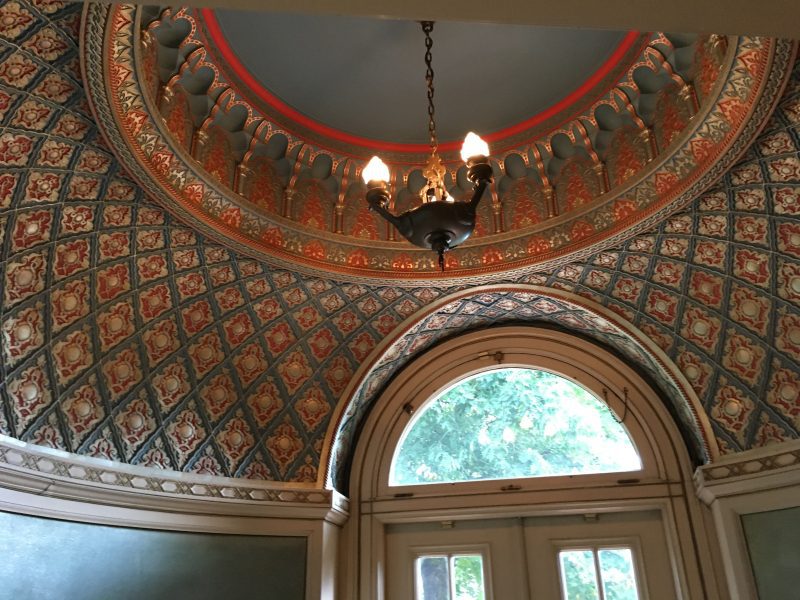 We explored the whole interior of the mansion on the self-guided tour and eventually ran out of curiosity. It was also getting close to way after lunch time and I was getting close to the grumpy side of wanting food.

So I found us a little and super well decorated gastropub called 23 Hoyt – where I proceeded to order a corn dog. It was a corn dog made out of an Olympic Provisions sausage and all real cornbread, accompanied by a salad, however it was still a corn dog. But it was the best corn dog of my life. The corn bread had the sweetness of real corn ground to perfection, probably by some artisan corn grinder, and the sausage resembled a hot dog in its shape but not in its taste or consistency. I do not regret my ordering decision. 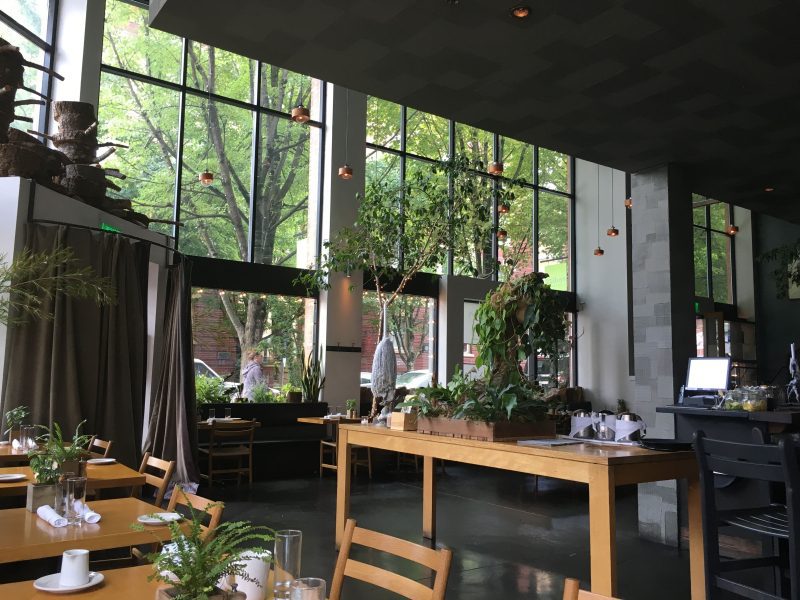 After lunch we walked about a mile to go to a museum of oddities that Jeremy found – because he is good at finding these sorts of things in every town we go to or get near. Dan was not very thrilled that we walked that far for a one room romp through cheesy horror film exhibits – but he survived and we got some fun pictures in. 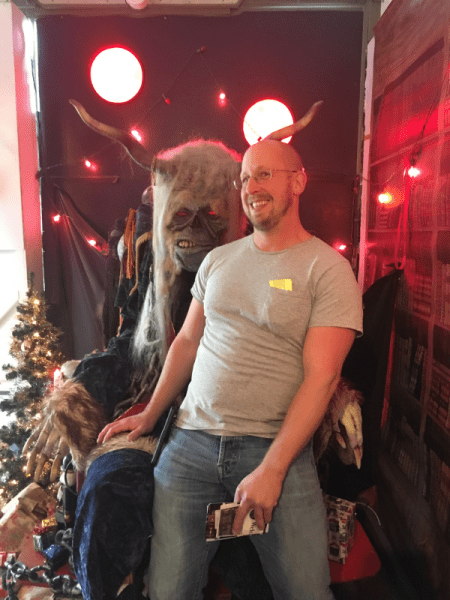 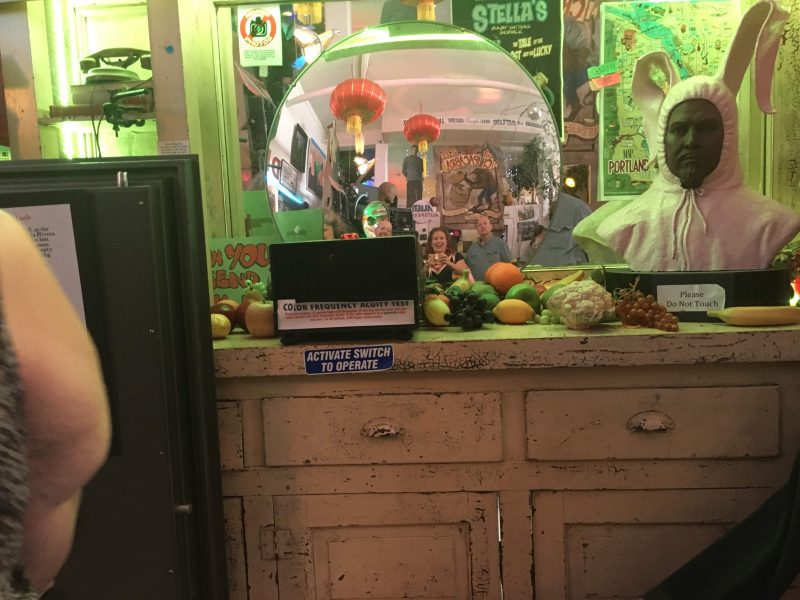 And the three of us in a funny mirror. 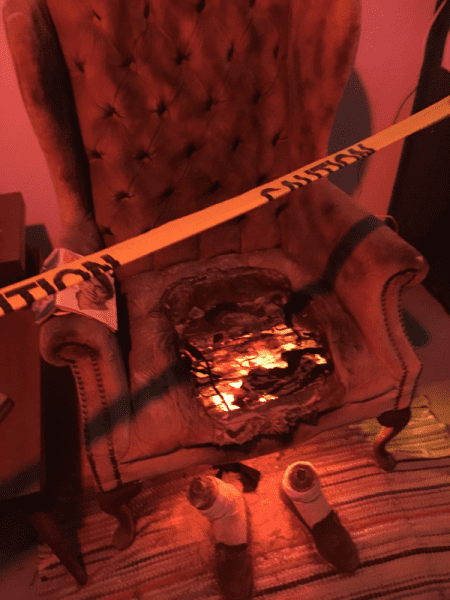 So much fun! We couldn't control ourselves – we almost ended up like this guy here, spontaneously combusting. Not really, but it was quite a strange place, even for Portland – and it smelled funny, and was covered in a nice coating of "I'm pretty sure you don't want to touch that." Ew. 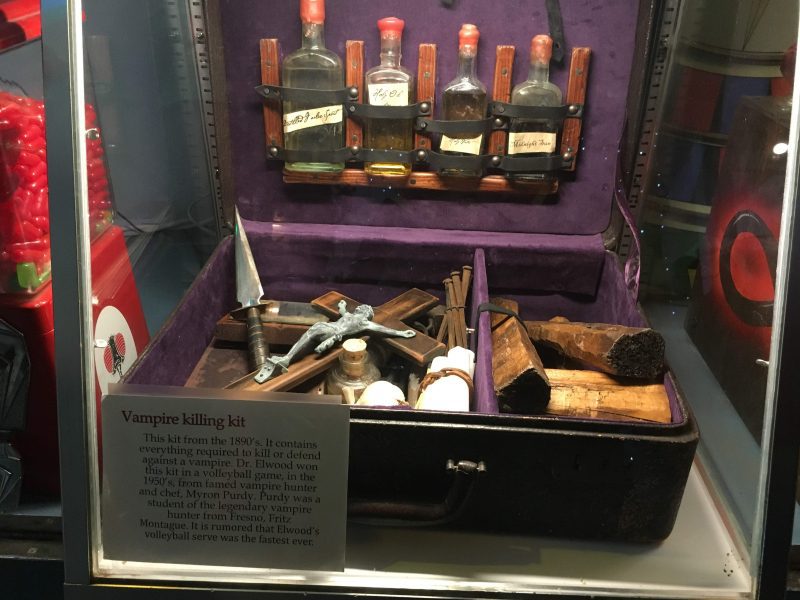 After the odd place with the funny smell – it was finally time to check into our Airbnb which was across town, and hopefully ditch the car for the rest of our time in town now that we were in the land of public transportation and ride sharing again. 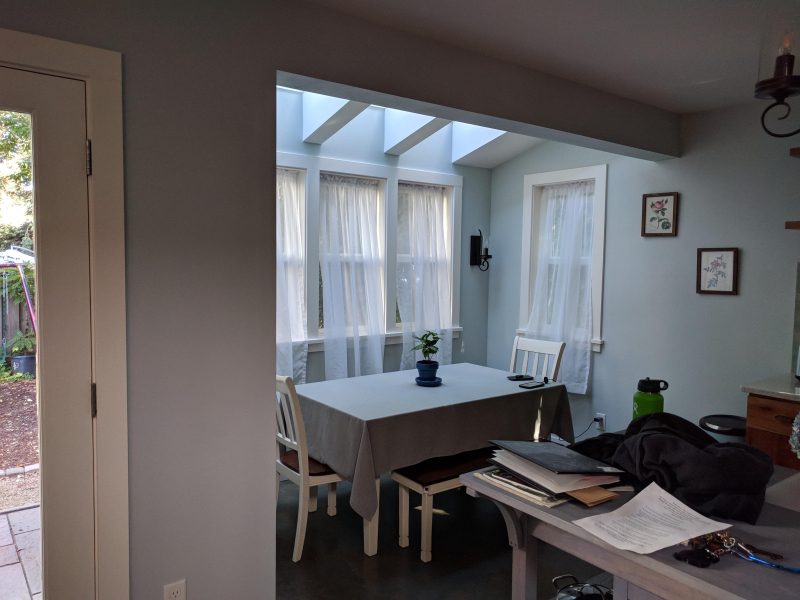 Our Airbnb house was super cute and brand new. Our hosts had a house built in their backyard just to do Airbnb and just finished it less than a few months prior to our stay. A major selling point. It still had new house smell. The only downside was the spiral staircase, but for Airbnb downsides, that is nothing. I've experienced way worse. The refrigerator was also stocked with healthy snacks and everything we could use for breakfast or vegetarian meals. However, we were in Portland, the city of amazing restaurants, so it was very unlikely we were going to eat any of it. 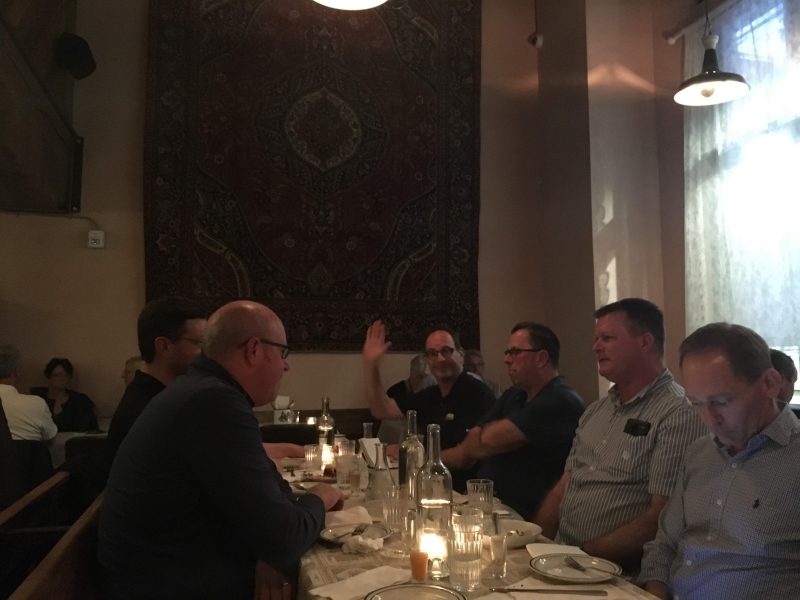 Especially because we had dinner reservations at Kachka. Portland's Russian food experience where, come to find out, everyone knew I was coming because I was "Jamie's Babysitter."  So in Duluth, Minnesota when I was growing up I babysat my little brother and the kids who lived across the yard from me – Jamie and Joe. It was a good gig, and a steady summer job – the kids were also extremely well behaved, so it was not difficult (just ask Joe, he'll show you the scar from when I pulled him in the wagon). 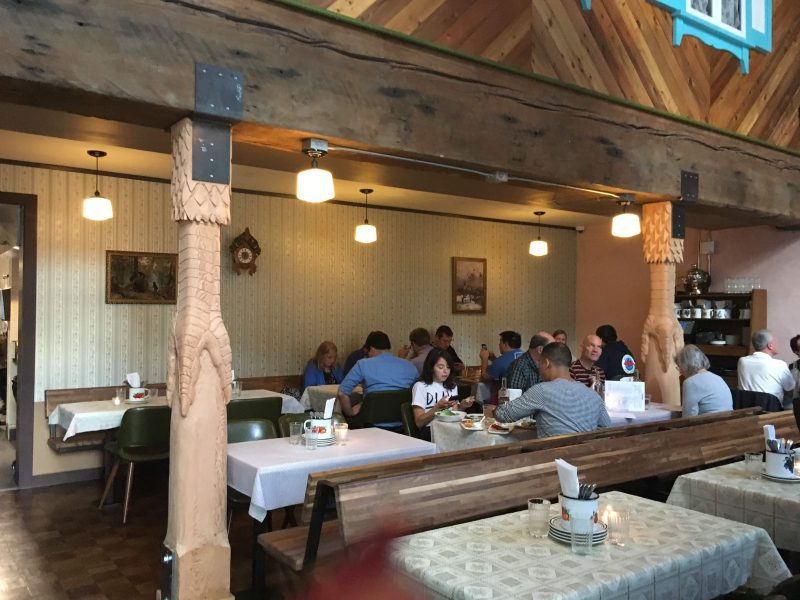 (My fingernail is pointing to the table we sat at in the picture above, I did that on purpose). When I arrived at Kachka, everyone had lovely things to say about Jamie (who was not present, she worked lunch, so I missed her) and I took all the credit with the caveat that I was sure her parents had a lot to do with it.  As a result of my celebrity status we got some special perks (or so I believe), like a round of horseradish infused vodka to start and some fancy cookies to finish. 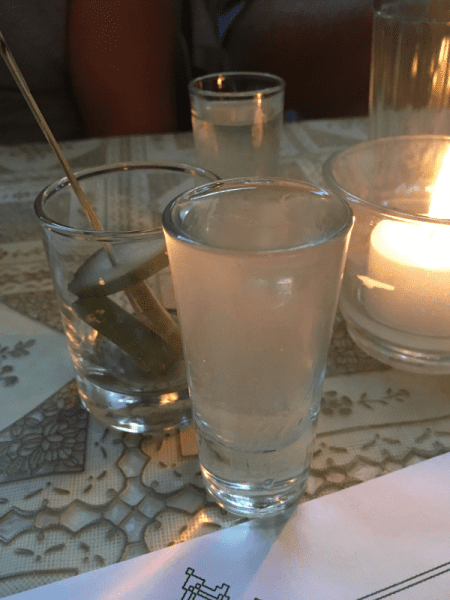 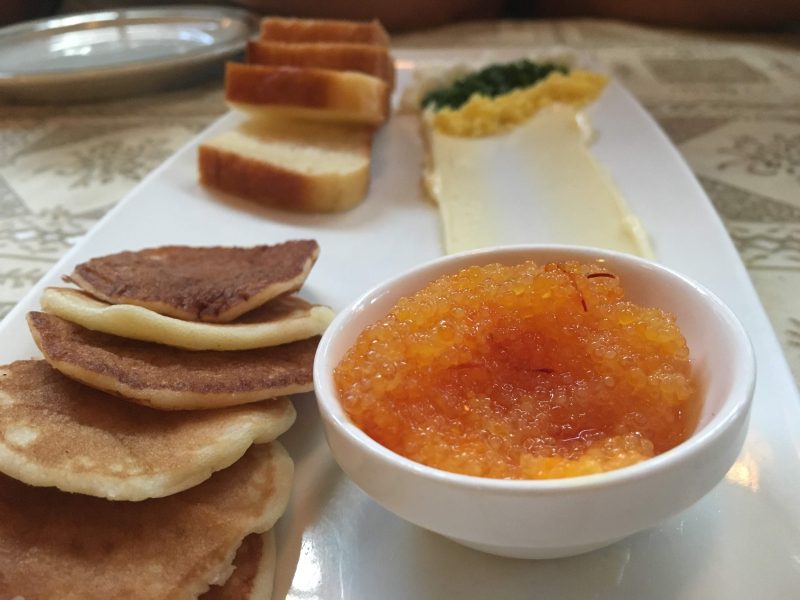 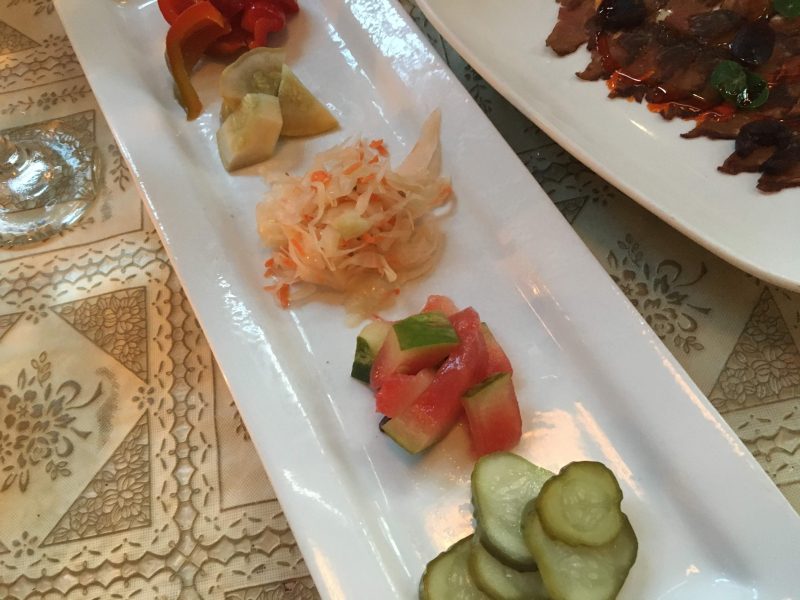 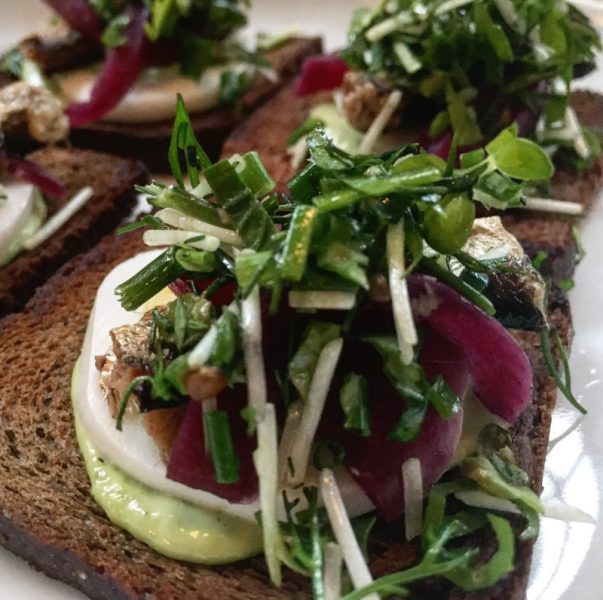 Baltic Sprat Buterbrodi – a very Russian name that I think means "little fishes on toast." So good – probably my favorite of the tastes we had next to the caviar above. 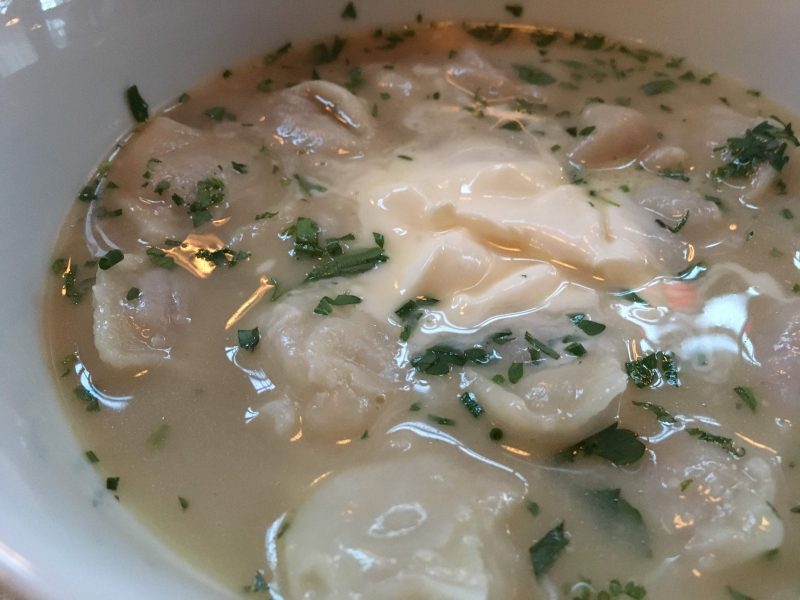 Dumplings with pork and beef and "fancy sauce."

Roasted rabbit leg – A-mazing. So savory and sweet and soft and chewy – you could taste the cute just fall off the bone. 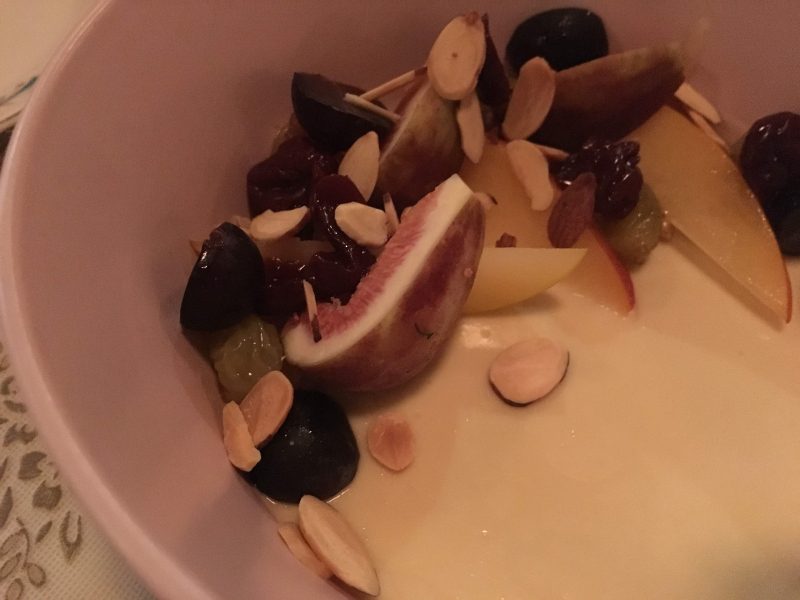 Dessert dumplings – although we could have had them for dinner too – they are filled with cherries. They reminded me of the prune peirogis that my grandmother used to make. Which were not bad, in fact they were good, but just not for me. I ate two, and we gave the rest to Dan. 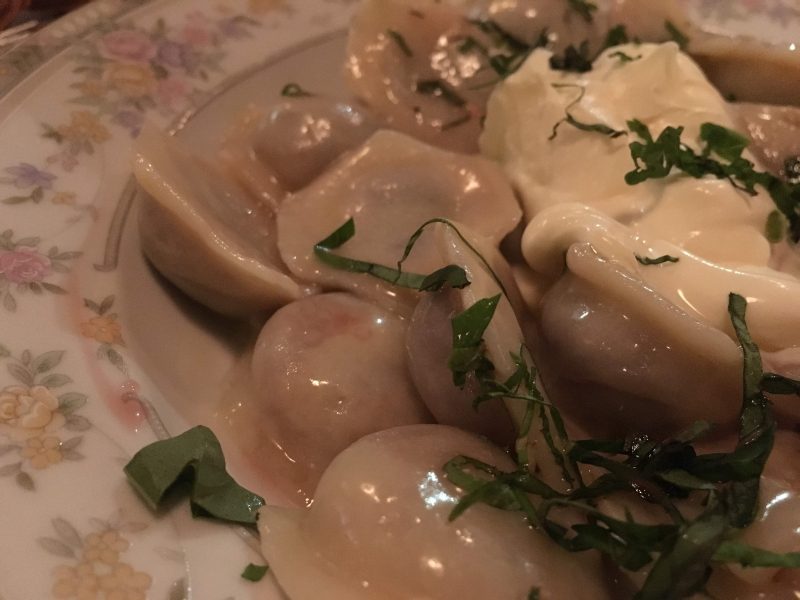 And there would be a photograph of cookies that looked like almonds here if any of us could have remembered to take it. They were so good, I wish I had ordered the cookie plate, I tried, but they said we were getting cookies even if we didn't order it.

The meal was amazing. Probably the best meal I've ever had in Portland, even though I say this every time I go to a new restaurant there. This had the benefit of being both a complete adventure, and a massive assault of flavor that left you wanting more. And, although I was a skeptic going in, if you drink, and drink vodka, it is definitely the place to do so, as all the food is meant to pair with it. So go for it, if that is what you do, just make sure you have a designated driver or a Lyft or Uber home and a brunch plan involving hair of the dog the next morning.

Now to close, enjoy a photo of me glowing over the skyline of Portland. I really know how to blend in to a crowd. (Hair color credit to Jodie Knowles of Satori in Seattle, Washington – she definitely added the Paprika to my Angel on this trip).