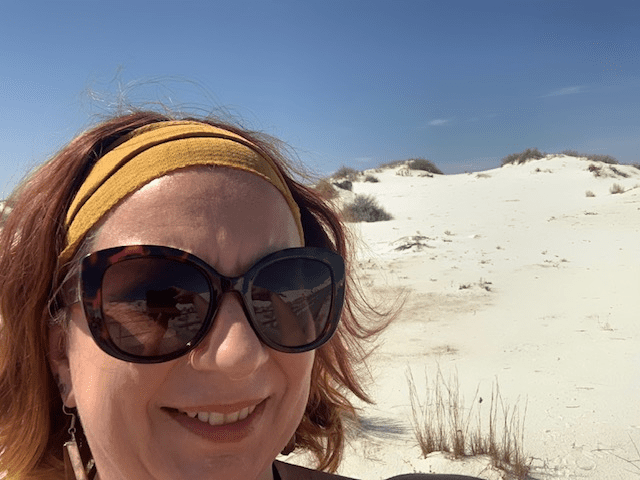 From our lovely room in Socorro we made our way South in New Mexico to Alamogordo. It was a beautiful day and a beautiful opportunity to meet the World’s Largest Pistachio and see some White Sand. 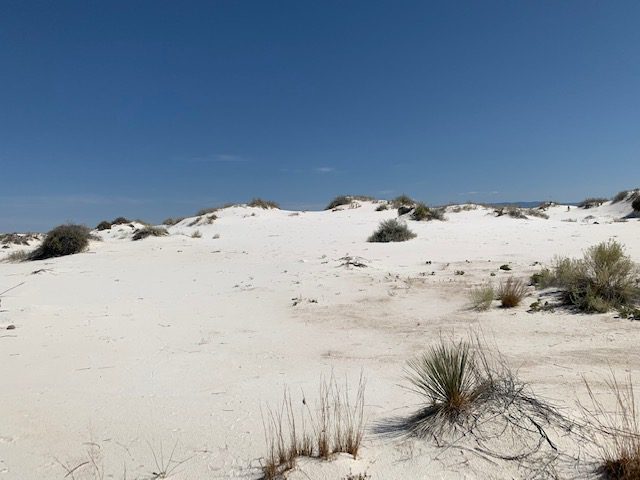 Wait what Angel? Right – just outside of Alamogordo exists PistachioLand – a pistachio farm that realized making a larger than life version of their product could draw in business, and tourists, just like me who are attracted from across the country to “The World’s Largest…” anything. It really does work. I admit it, the giant pistachio was at the top of my list for this trip, and there was no way I was going to miss this weird photo opportunity. I was also very curious to find out what PistachioLand had to offer a pistachio lover like myself inside the depths of its storefront. 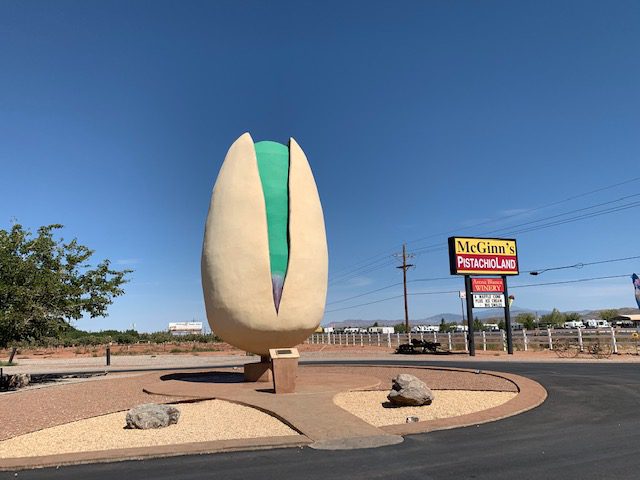 Drum roll please…PistachioLand offered, you got it, pistachios! of all shapes, sizes, and flavors, as well as gifts featuring the World’s Largest Pistachio.  Shocking. I left with a PistachioLand mug, postcards, a magnet, some pistachios and a gift bag. I was very satisfied with the short and sweet visit. 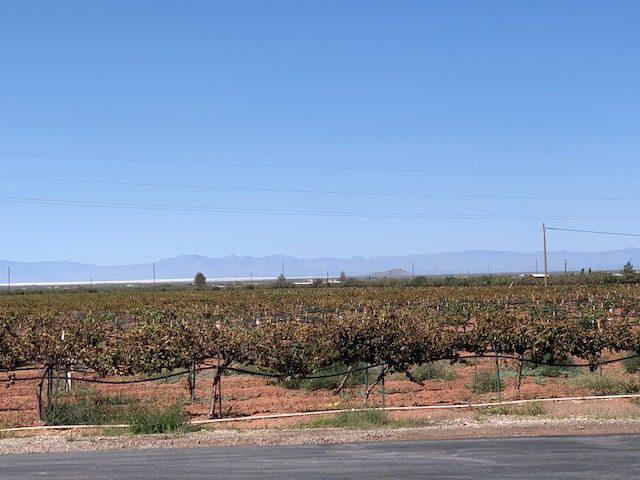 Before arrived in Alamogordo however, we had a little pit stop and car emergency in a place called the Fire Fields. 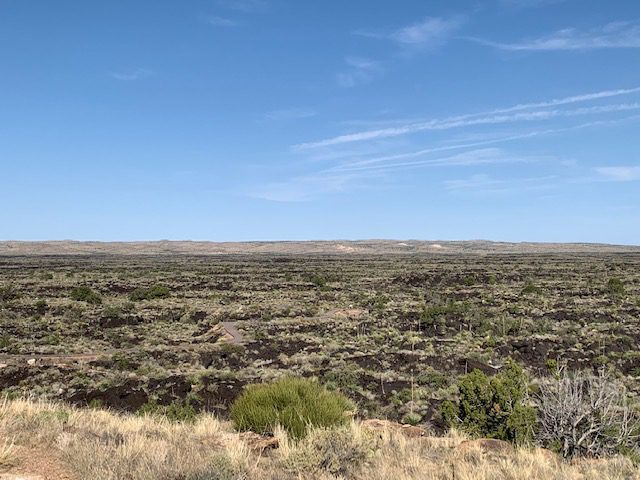 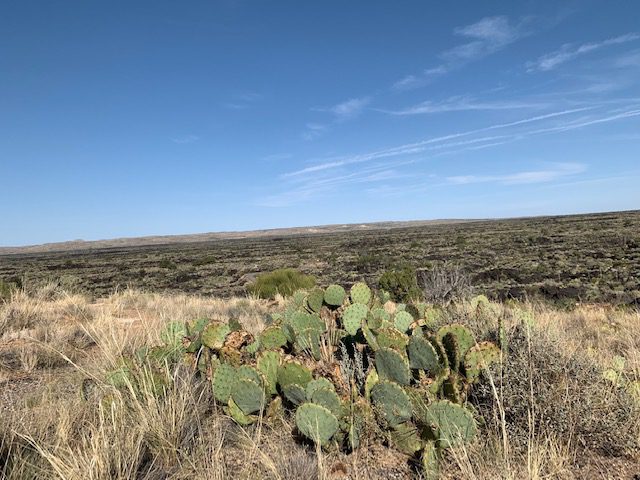 The Fire Fields is a recreation area in the middle of who the heck knows where New Mexico. There was not a soul or anything besides a sage brush and occasional cactus for at least an hour on either side of it. And this is where we had a very emergent need for a bathroom that turned into the car not doing what it was supposed to do. We troubleshooted – 1. it is a next to brand new car who 2. just got a full service with all of the things checked before we left and 3. the battery was not dead but it would not turn back on for some reason. Turns out, after phoning in a lifeline, that the steering wheel was locked and all was well as soon as we were able to unlock it. A GIANT sigh of relief was let out as being in the middle of nowhere New Mexico, with nothing but rattlesnakes and a talkative park ranger to keep you company is not ideal if your car actually breaks down. 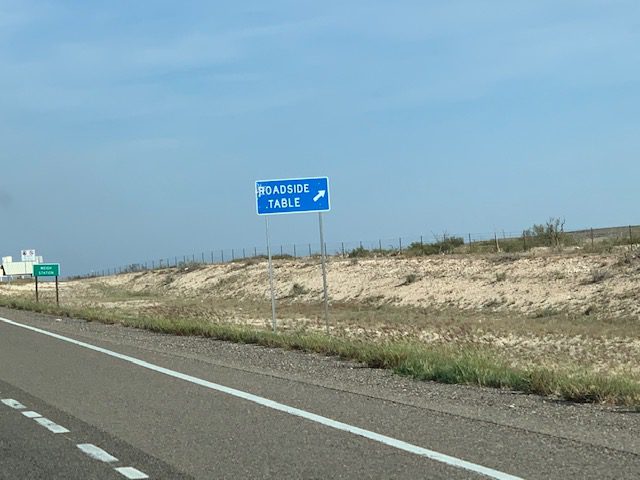 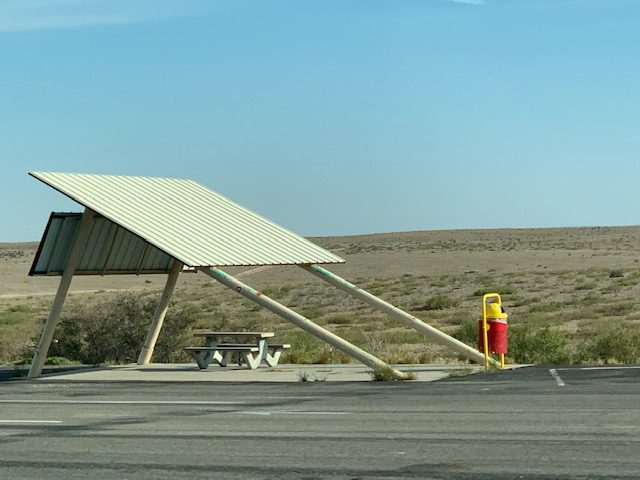 We were back on the road to ponder the existence of roadside tables alone on the side of the road without a restroom.  We learned that a gathering of roadside tables is called a rest stop, even if there is not a restroom. An important piece of knowledge when it comes to planning water consumption and driving across the dry desert environment of New Mexico. Eventually, we arrived at PistachioLand, and then, just a little ways down the road, we caught sight of the white drifts of sand suddenly appearing on the scrubby landscape. 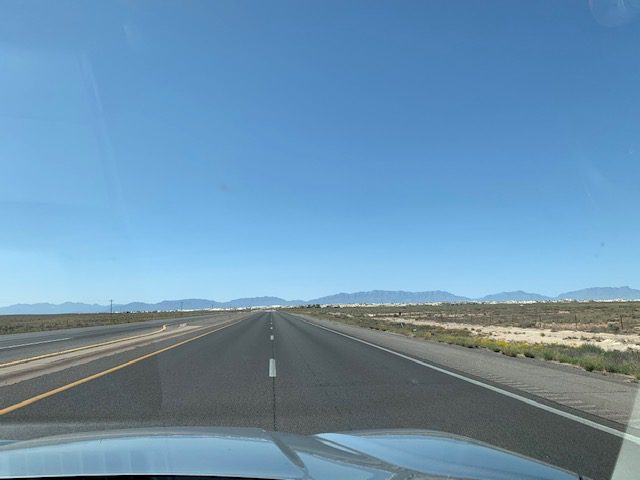 They do not show up really well in this photo, but if you squint you can find them on the horizon. The one thing that we have not lacked on this journey is “change of scenery.” In the course of 150 miles we can see fast nothingness, followed by colorful hills and mountains, followed by multicolored dunes of ancient sediment, followed by trees, followed by lava rock, and on this day – sage brush high desert turning into white sand dunes. 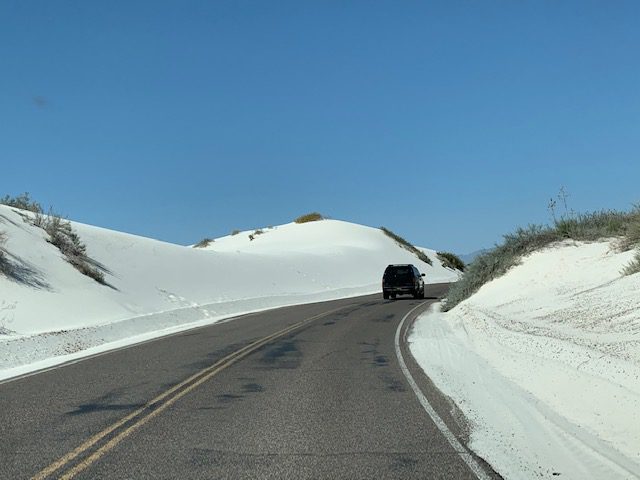 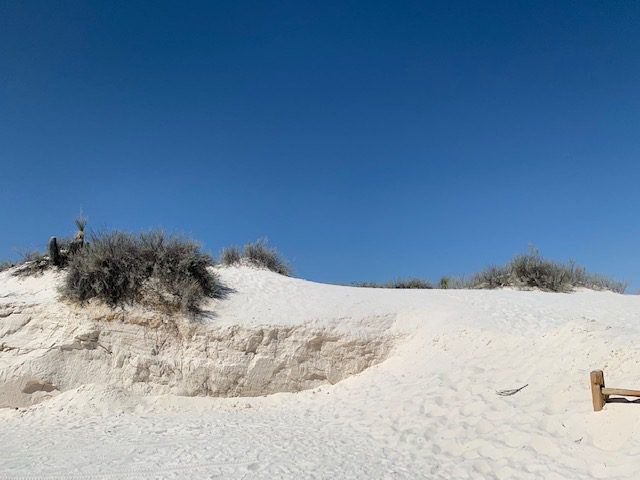 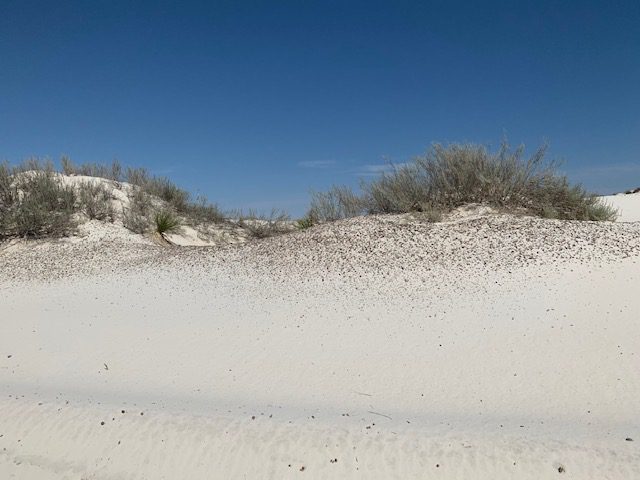 The further you go into the park, the whiter it gets. White Sand National Park (not to be confused with White Sand Missile Range or anything nuclear like the Trinity site, although those sites are not super far away), is a giant deposit of gypsum sand dunes in the Chihuahuan Desert covering 275 square miles, making it the largest gypsum dune field in the world. And thanks to a some visionary people, most of this area was preserved as a national monument since 1933. In 2019, it was re-designated as a full-fledged National Park – making it park #62 in the National Park system.

Gypsum is big business, and if this area was not preserved, it likely would not be there, as dump trucks would have carried it away to make drywall and gypsum board, among other things the substance is mined to create. 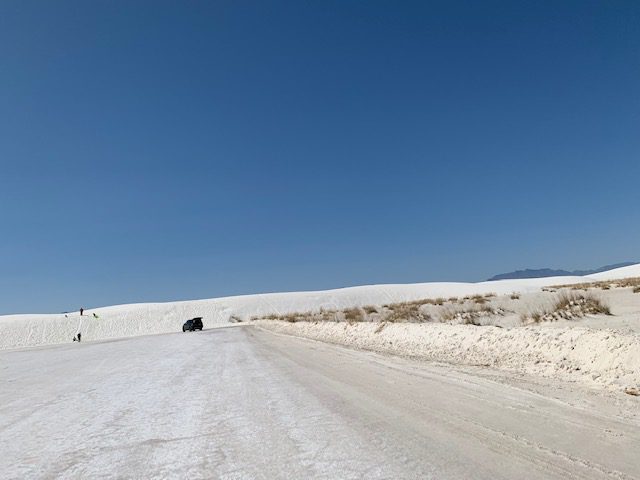 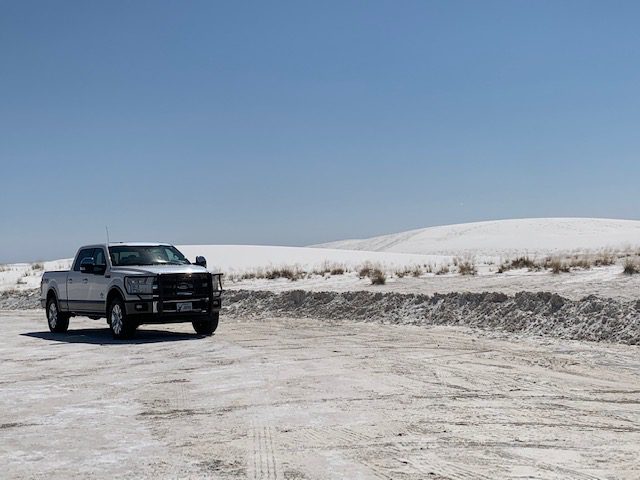 One of my favorite parts of the park was that the sand was snow white – so it looked snow, right down to the sand banks on the roads. If you are not from a place from where you have snow banks this might be lost on you – but it just tickled me to see “snow” banks and sledding under the hot dry sun midday sun. The sledding looked fun, as did the numerous photo shoots I witnessed. 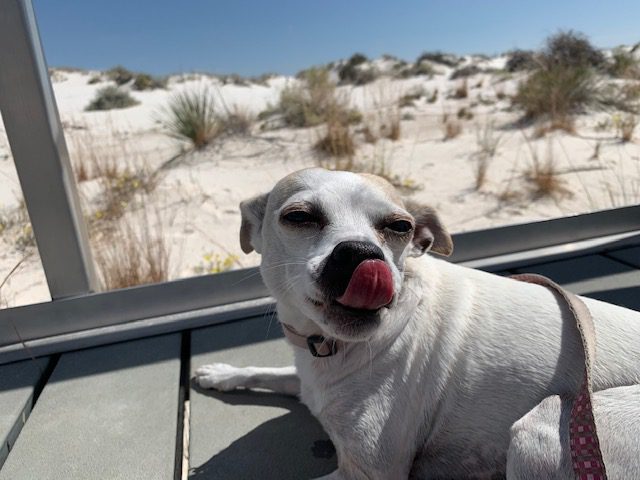 The dog and I walked out on the boardwalk among the dunes short nature walk in hopes of seeing the bleached earless lizard, or the apache pocket mouse, but we were not so lucky. Charlotte kicked at the white sand, and attempted to lick it in curiosity. She was not super impressed with whatever she did find. I was though, as the white sand was soft and light – so unlike any sandy beach I had ever been on anywhere in the world. 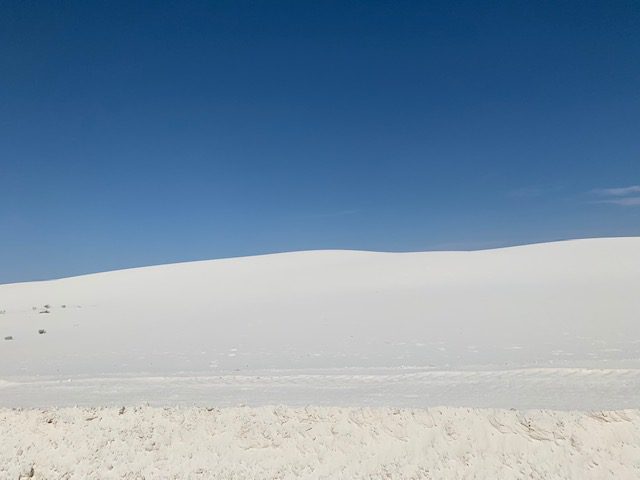 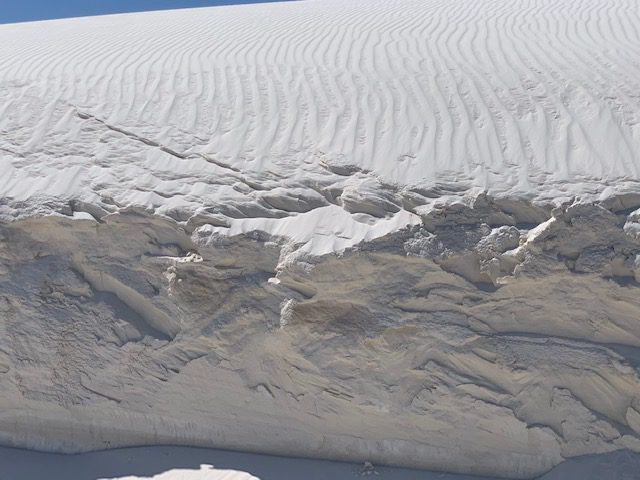 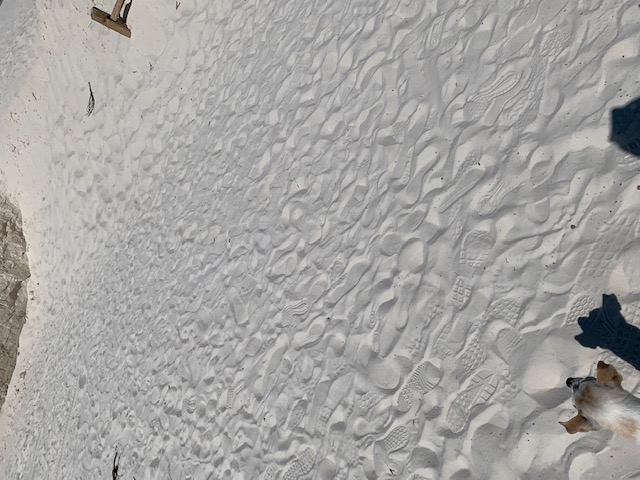 After our visit to the park it was time for lunch and our drive to Roswell. We found a little southwest/mexican food restaurant in Alamogordo. I ordered Tampiquena, steak topped with green chili & onions, served with a small enchilada, beans and rice, and a guacamole “salad.” This was simply guac on top of an iceberg lettuce salad btw. It was a great start to my real southwest food adventure as I experienced the earthy chilis with the seared steak. So good, my palate was ready for the green chili marathon. 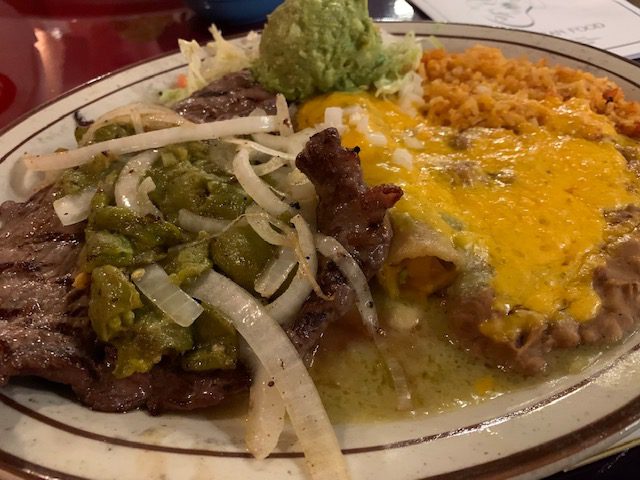 The drive from Alamogordo to Roswell, New Mexico is just 150ish miles, of which about half is absolutely nothing but sage brush, and the other half is semi-interesting topography. 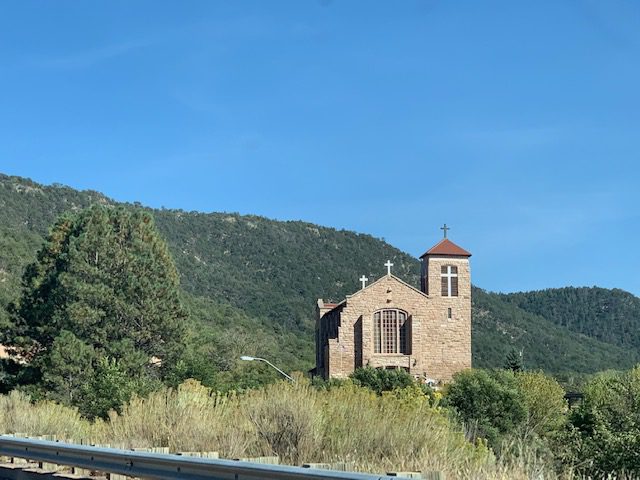 And soon we arrived in Roswell, ready to take in some not-of-this-earth adventure. 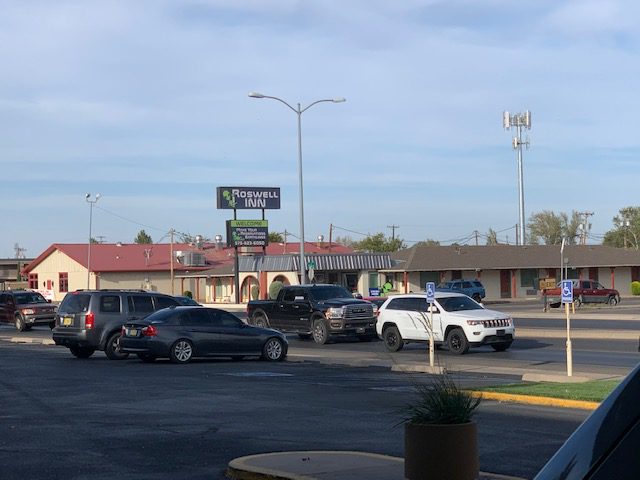 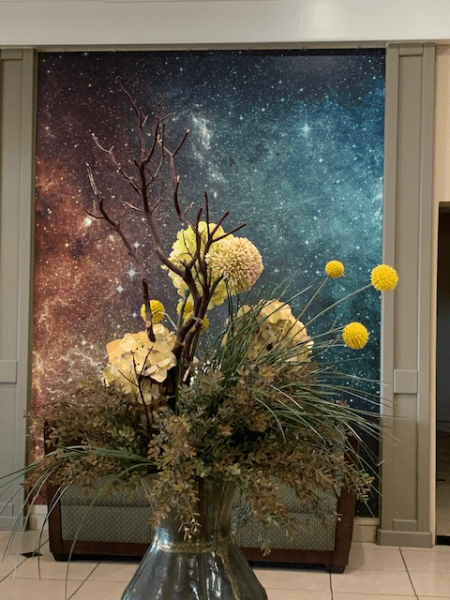