"Anne Putnam had more reason than others to be disturbed." Echoed the deep voice out of the speakers at the Salem Witch Trials Museum as we watched the lights shine on sad dioramas with life size wax figures reenacting the scenes that made up the 1692 Salem Witch Trials. We kept hoping that the figures would move, or something would happen other than semi-cheesy commentary done in overly dramatic way – but nothing did. 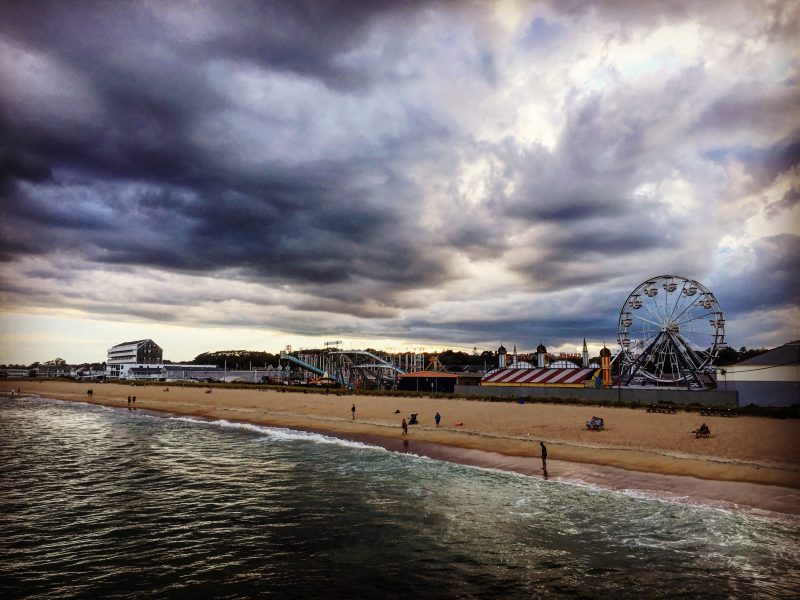 We knew going in that Thursday would be a long day in the car, but until it happens its is not real. We had to drive all the way from Dennis, Cape Cod to just outside of Portland, Maine – with a stop in Salem, Massachusetts to break up the day. 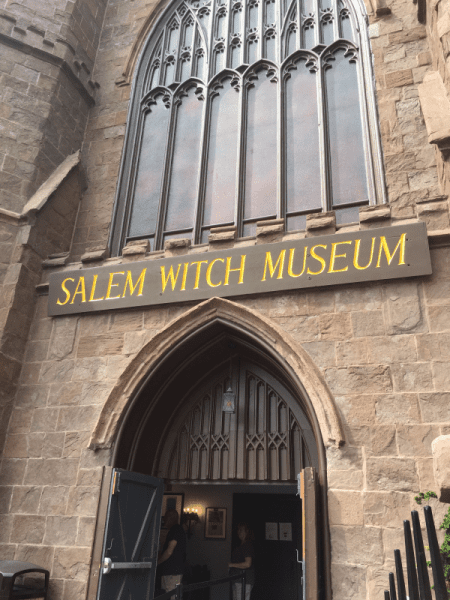 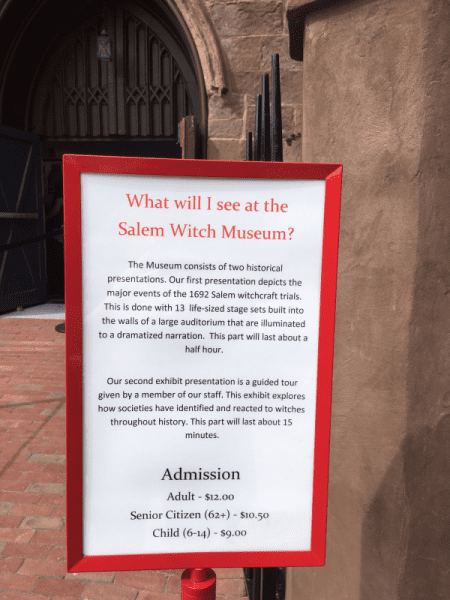 Shockingly, Salem's tourist trade is completely centered around the unfortunate witch trials that occurred there in the summer of 1692. There are multiple museums and presentations you can go attend to learn about the events and group think fervor that killed 19 people and imprisoned over 200 (for years in some cases). 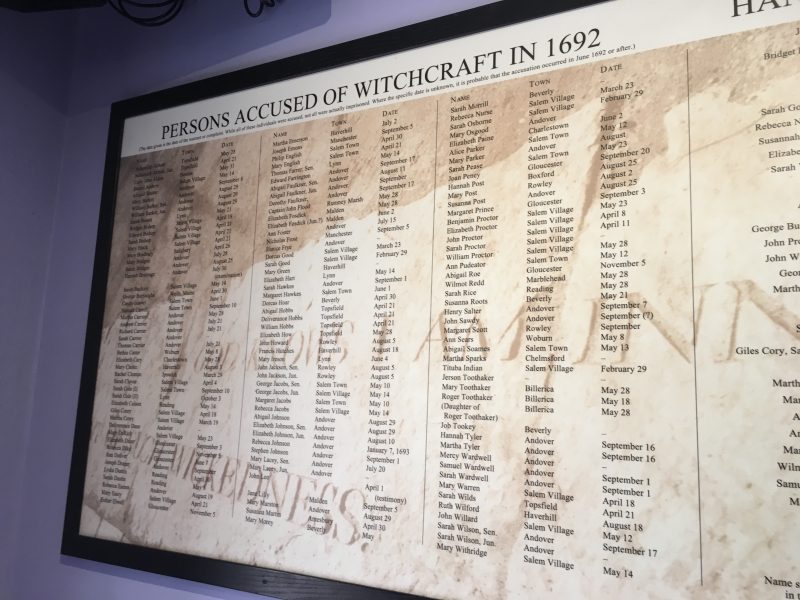 We chose the "museum" thinking we would get the most directly historical information. We got dioramas and a cheesy narrator. 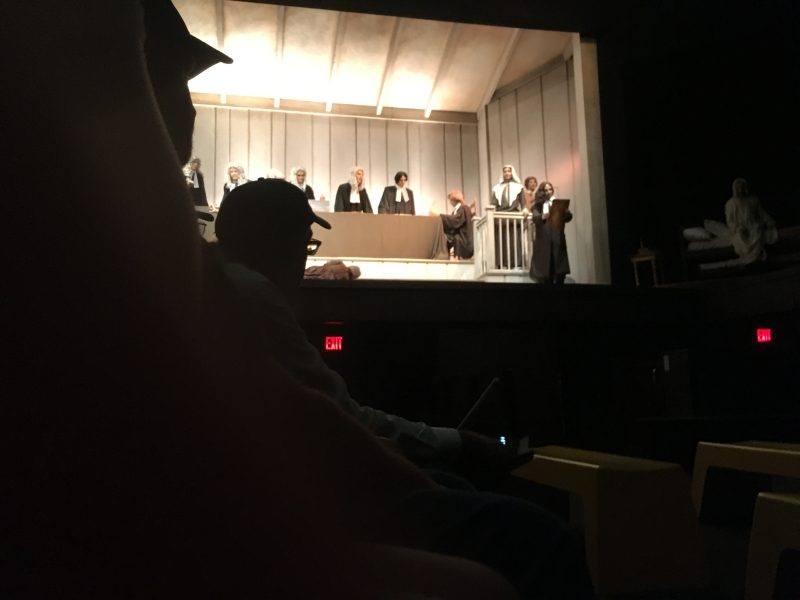 I wasn't supposed to take this picture, but there was no one watching and I couldn't help myself. It took all of my self-control to just not photograph every single display we were shown with narration – it was just that cheesy. "The evil of the devil was upon them!" said the narrator.

We did get some historical facts usually left out of the dramatic reenactments – such as the fact that although many of the accused were exonerated, because they were charged for their court costs, food and chains during their imprisonment, a large majority of the victims of the public fervor were too poor to actually get out of jail even after their names were cleared. 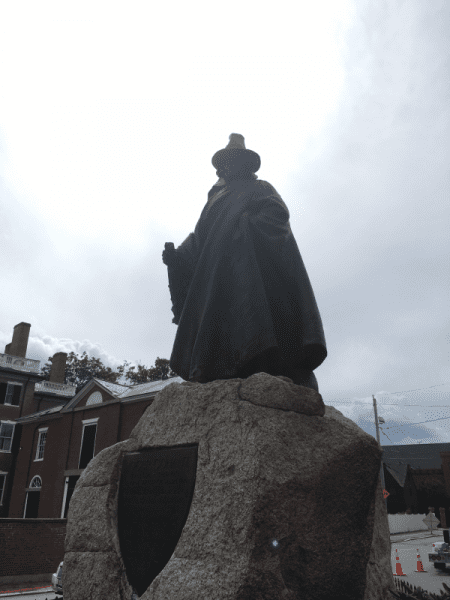 To the credit of the museum – our admission fee also gave us the "Witches, Evolving Perceptions" exhibit. I have to give them points for attempting to make a larger lesson out of the Salem Witch Trials incident. The point being any society with fear, plus a trigger, could result in a large group of individuals being scapegoated. They used modern examples such as the McCarthy era, the internment of Japanese during WWII and the Gay Community during the initial outbreak of the AIDS virus as examples.

1692 was a long time ago, and most of the United States is no longer a devil fearing Puritan with no access to science. Well, at least not in the literal sense. So group think gone wrong can happen as easily today as it did then – but it won't be about witchcraft. 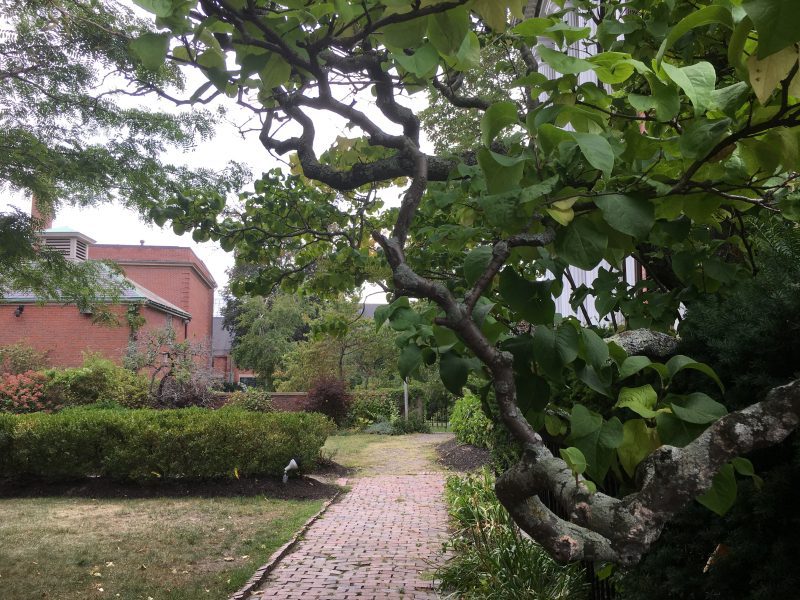 The presentation also covered the evolution of the perception of women healers and how the patriarchy of the church is what transformed the venerated role of the female healer into the dark image of the evil crone used to frighten. It brought this back around to the Federally recognized religion of Wicca and how male and female are both equal in this belief system. The "Wiccans" they had on display in the exhibit did look straight out of a Costume & Display store – but it was a really good try. A, for effort, as it was enough for the modern non-religious studies attention span to ingest. I resisted the urge to add to the tour and thanked our grad student docent when we left. 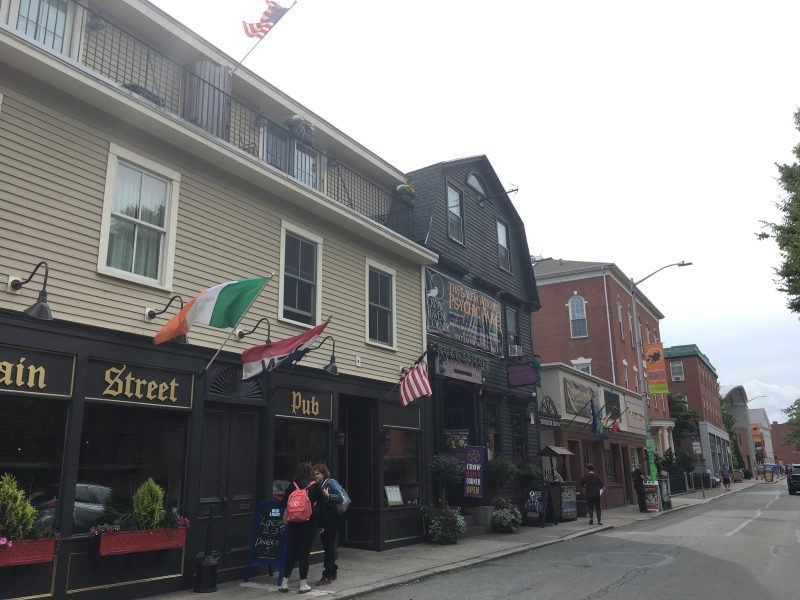 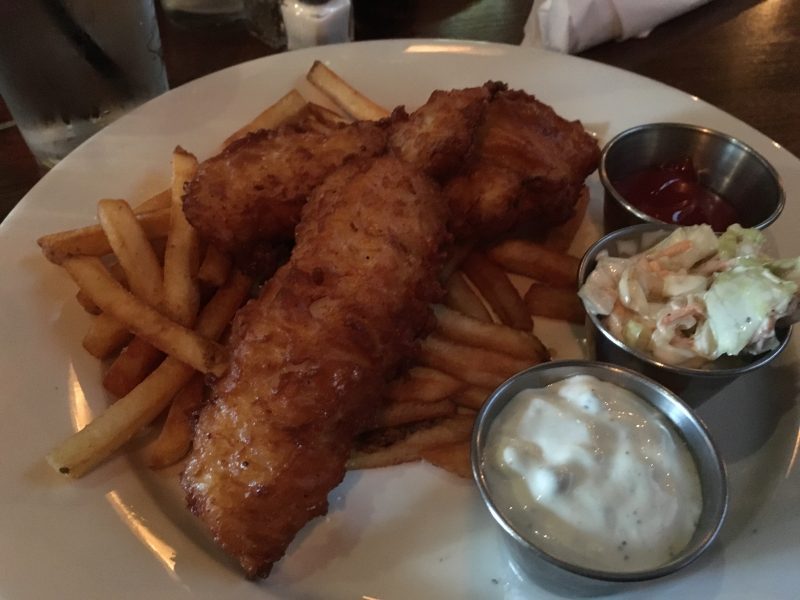 Before moving on we had fish & chips in a pub 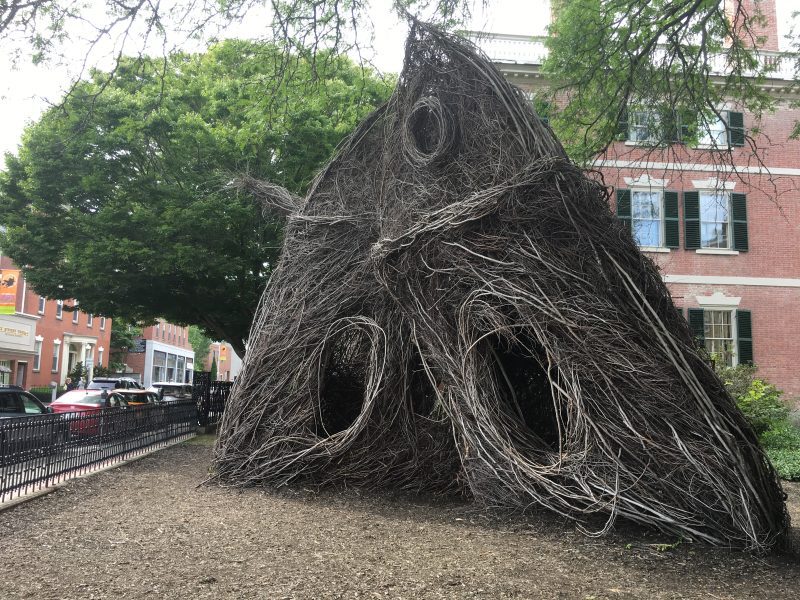 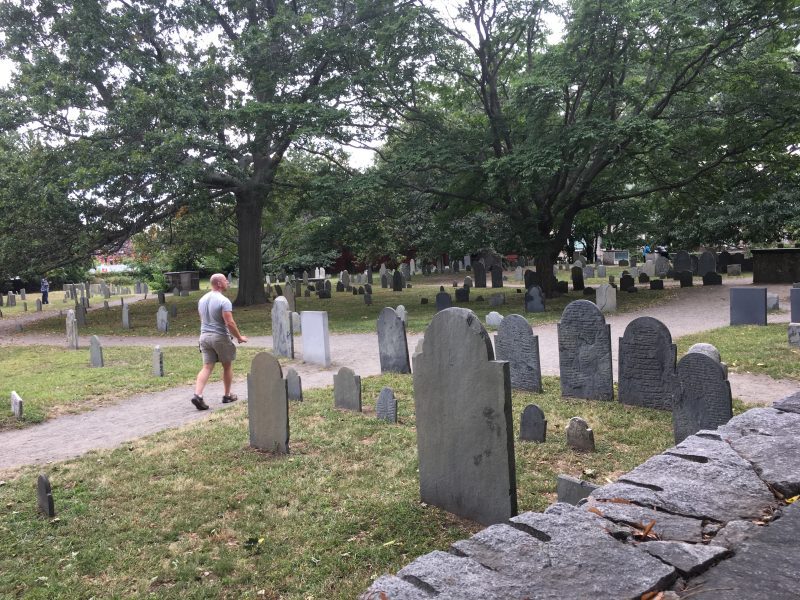 and visited the local old graveyard. I also walked through the memorial for the victims of the witch trials. 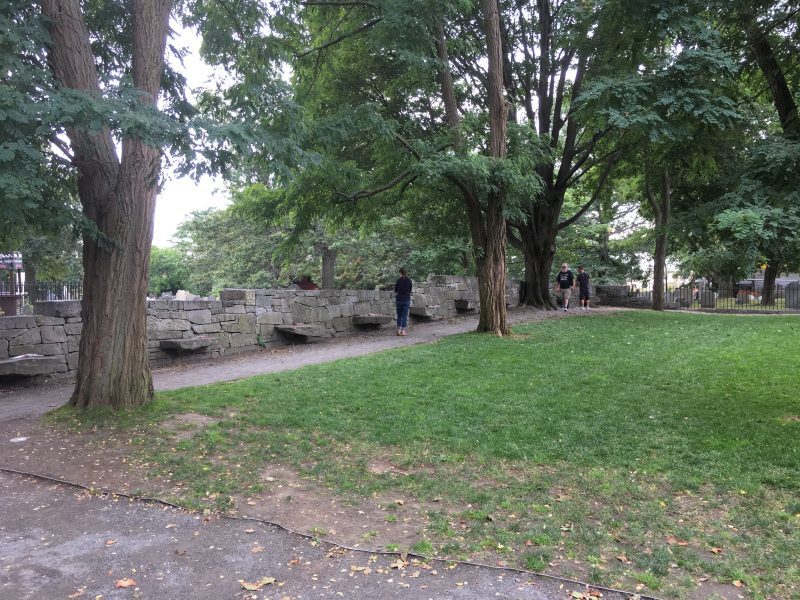 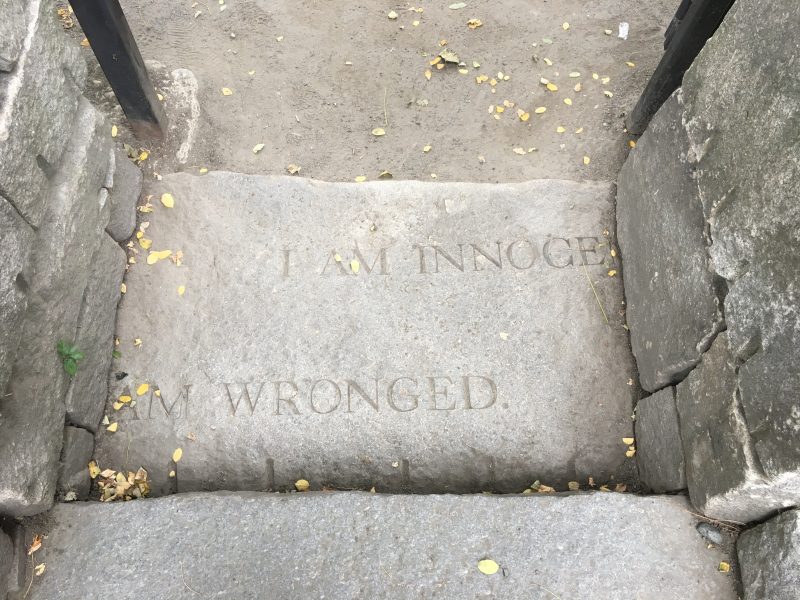 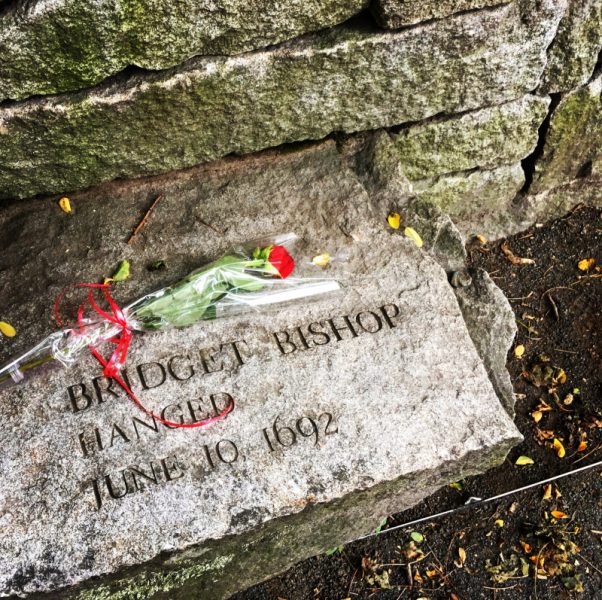 The memorial is quite tastefully done – it holds a stone for each of the victims that you can place roses on. Next to it is a "village" that shows what Salem may have looked like at the time of the trials.

We piled back in the car to continue our own New England pilgrimage up to Maine. We drove through New Hampshire and Jeremy got really upset about the toll roads. Eventually, what seemed like a really long 1.5 hours we landed in the tourist mecca of Old Orchard, Maine – just 10 minutes outside of Portland where we were able to get an affordable vacation rental that fit all 5 of us. 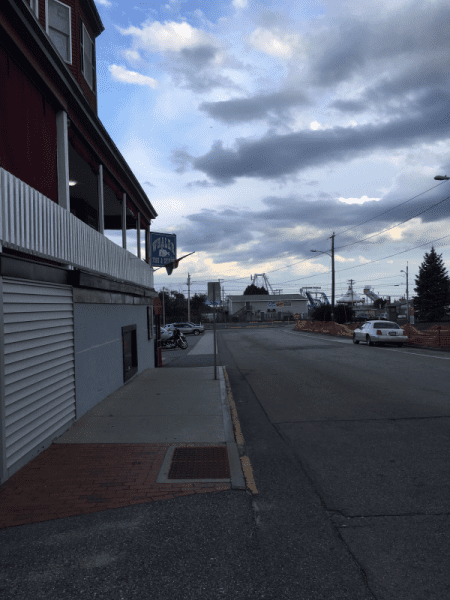 Unfortunately, it is one of those towns where every single thing except for the bars and a couple establishments for the locals close immediately after Labor Day. And then the whole place turns into a creepy pier. 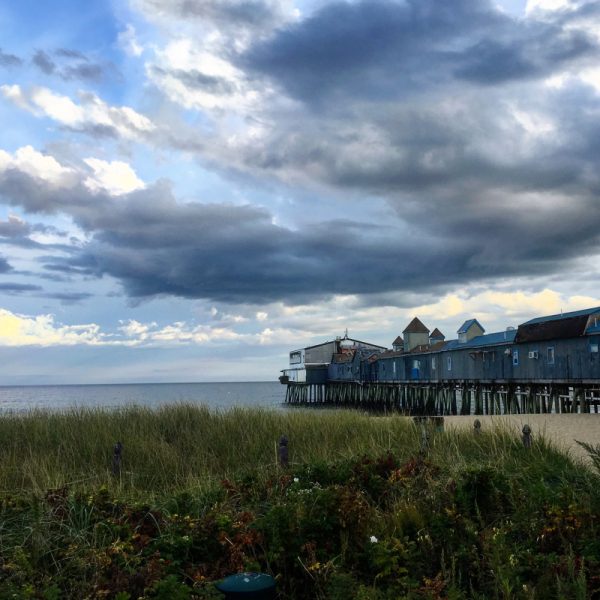 I now know why Stephen King writes about Maine. I kinda want to move here. In some ways I really want to move here. I think I've finally found the place where I might find that perfect Goldie Locks perfect size of place where the people are special but not too special and the towns are small but not that small, where I can get away from it all but have easy access to all the things. I'll have to do a lot more research and integrate it into my 6 year plan to figure this out – maybe. 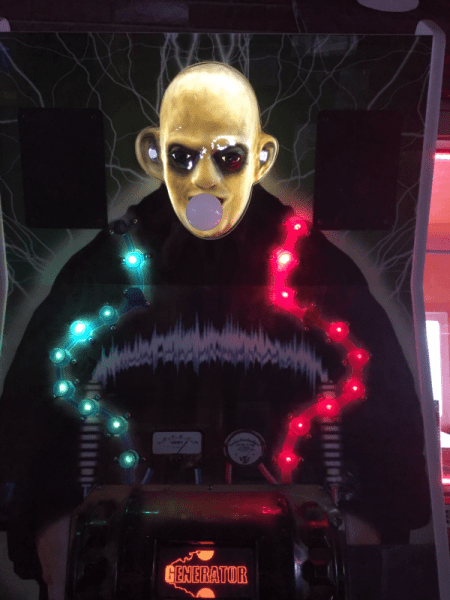 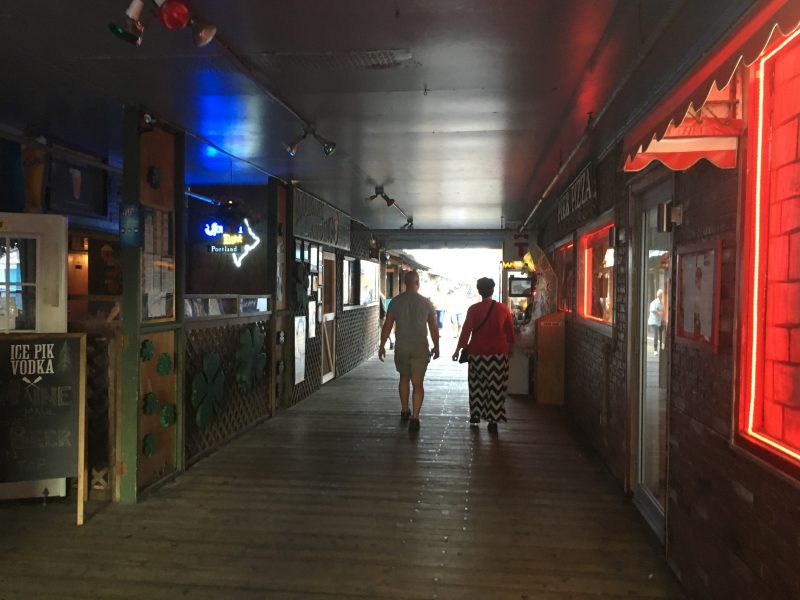 Meanwhile, on our first night here, we found a whole bunch of nothing on a very closed pier with a slightly creepy vibe. 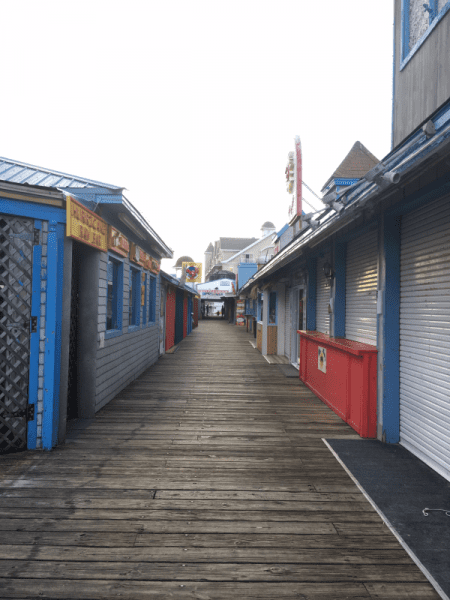 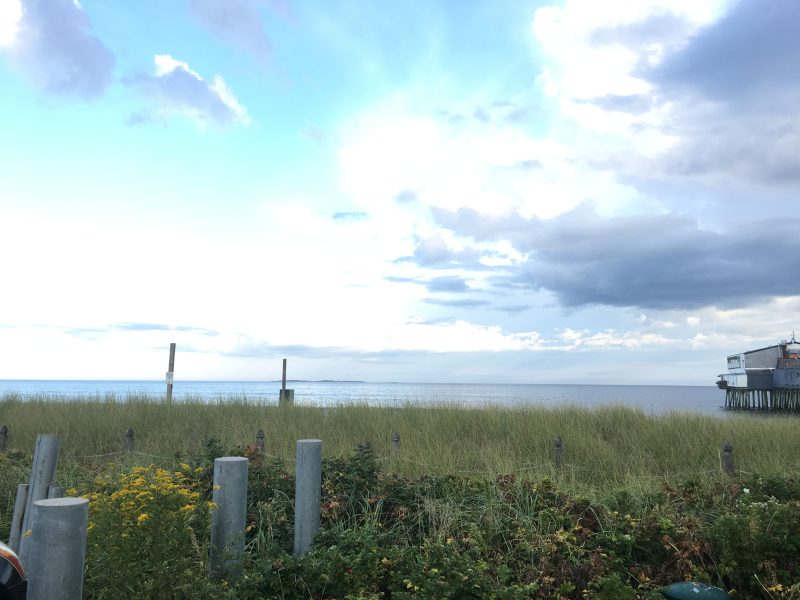 After realizing everything was closed we had a moment where we thought we might have to travel out of town for something as simple as dinner, but then we got control of ourselves and figured out what to do. 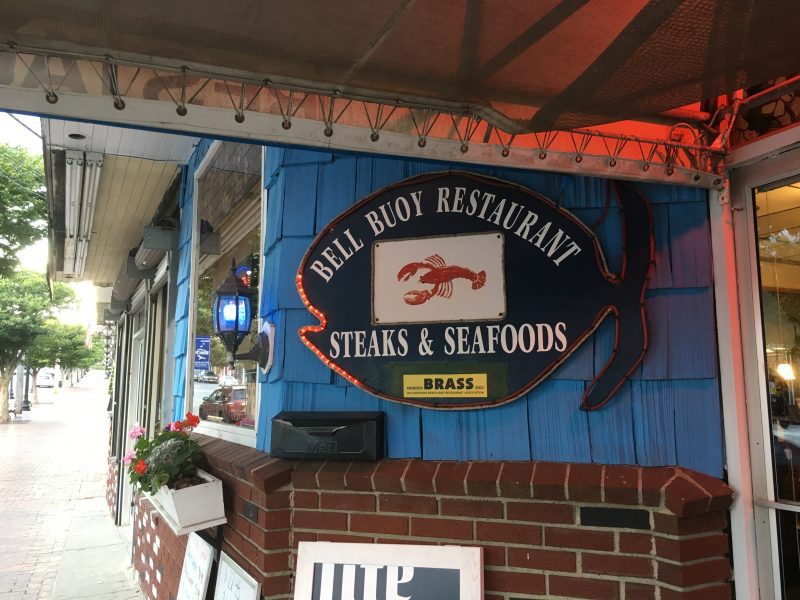 Go to the one open restaurant and enjoy it for what it is – old school surf and turf supper club. 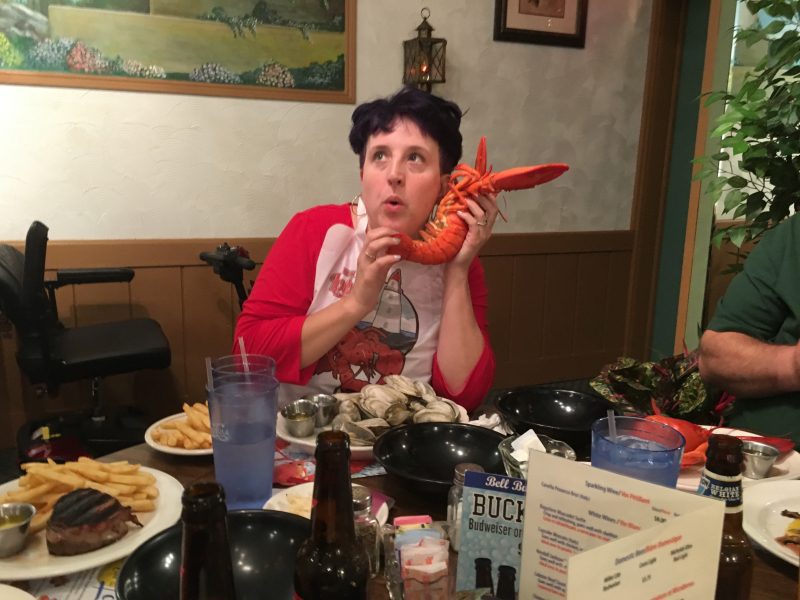 We each got the three course meal with lobster, except Jeremy and I. I decided I had to try to local delicacy – seafood cassarole. 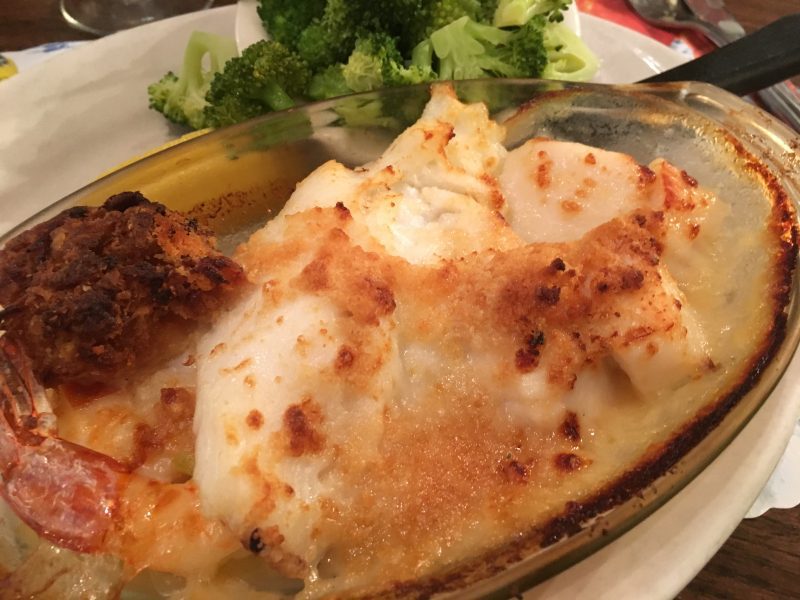 It had exactly 2 large shrimp, 4 oz of haddock, and 4 scallops covered in cheese with a dollop of stuffing next to it. 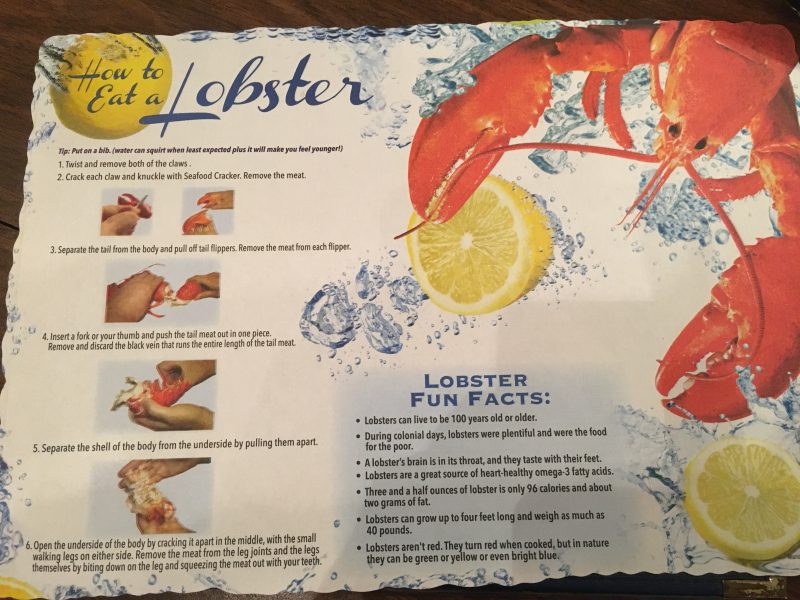 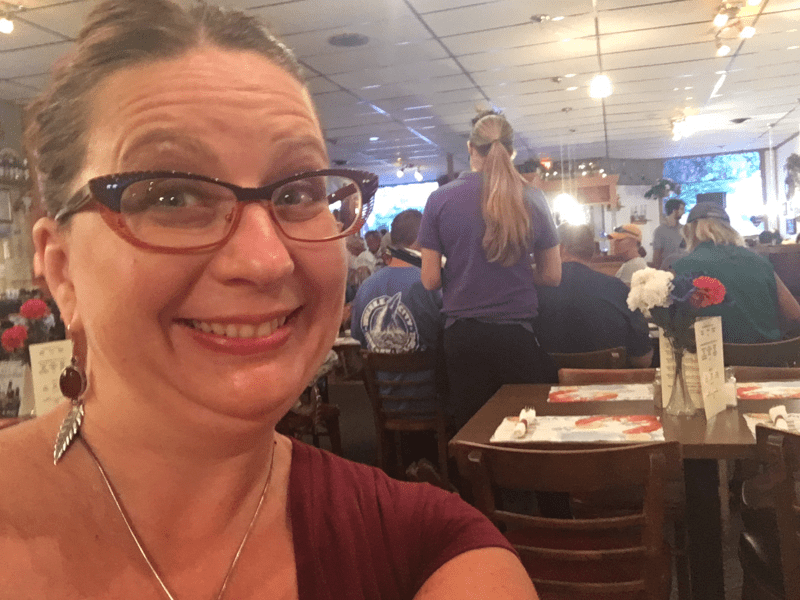 The only lobster I ate on this day was gummy lobster. 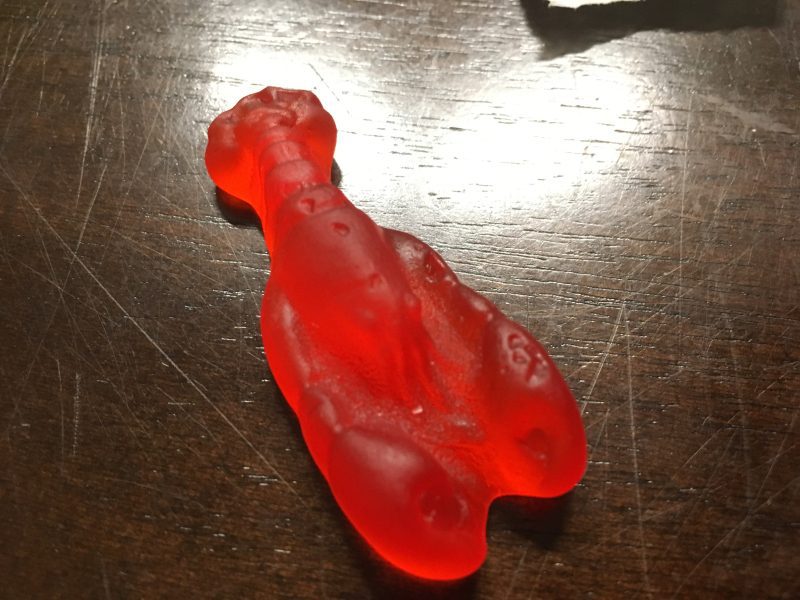 All in all it was a good day.