I felt horrible when I woke-up on Thursday morning, even with over 12 hours of sleep induced by Benadryl and amusement park exhaustion.  I clearly lost the war with whatever I had been fighting off since the plane ride to Nashville thanks to the introduction of a wasp sting and poison in my system – so now I had sore throat from hell and an impending cough.  Like a trooper I got myself and my exploded suitcase back together.  Jimbo, Pigeon and I were ready for check-out and the drive back to civilization. Prince's Hot Chicken and a reservation at the coveted Catbird Seat awaited. 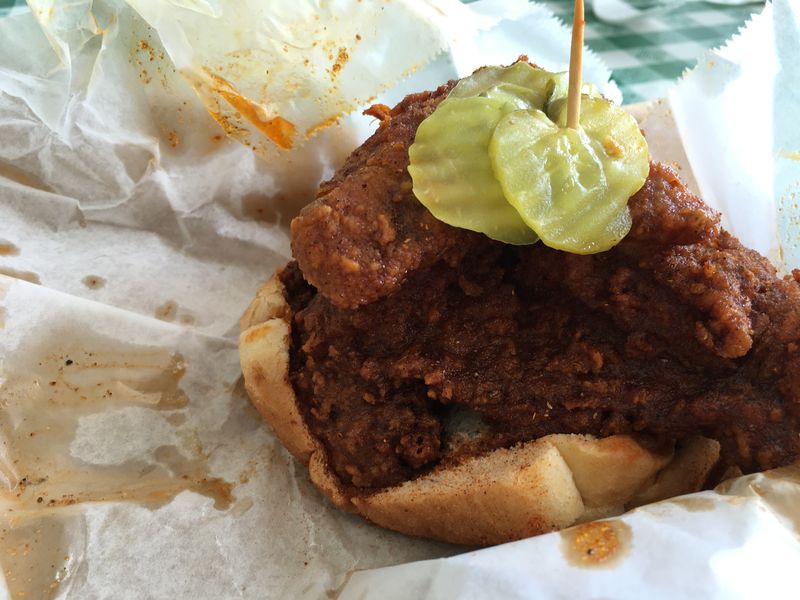 Before leaving town I finally got my breakfast salad. It was pure iceberg lettuce and cheese with a dusting of tomato. Awesomeness exactly as I expected a Pigeon Forge salad to be. 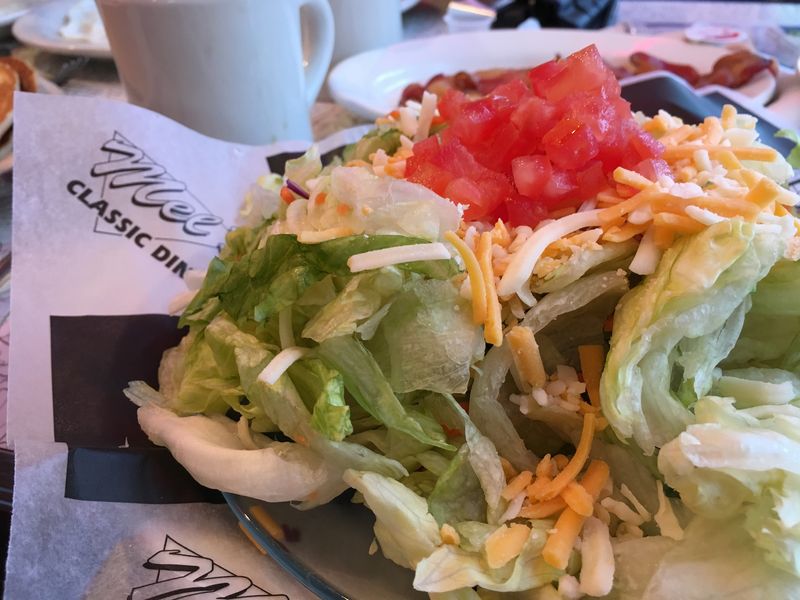 I did not expect it to be at a place called Mel's Diner. But I'll take it wherever I can get it. I got the weirdest look from the waitress, but I was happy.  Roughage is the best way to start a day.  Especially when you are riding in the car most of it and going to eat really hot fried chicken with no vegetables later. 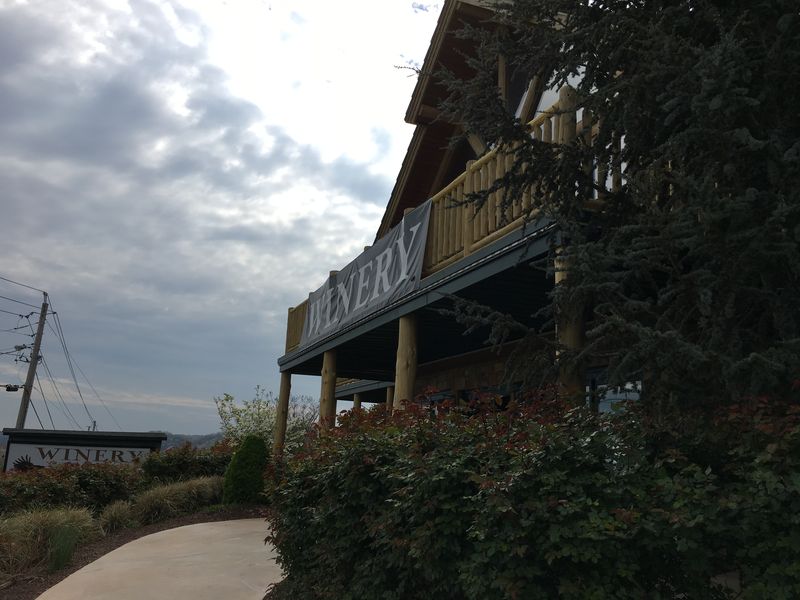 We had one final piece of business to undertake before leaving the region.  We needed to complete our Tennessee Wine Trail experience by stopping at the fifth and final winery on our wine trail cards to collect our free stuff thank you gift. Eagle View Winery sat on a hill overlooking a fine view of the Interstate 40 interchange. 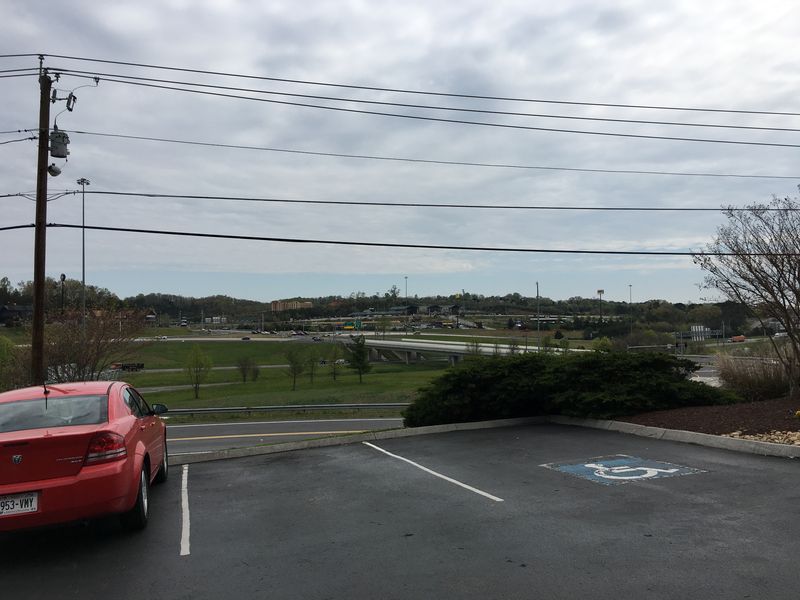 It contained wines that one might expect with such a lovely view of a giant freeway interchange. I will always remember the mouthful of oaky red mixture I wanted to spit but could not because no spittoon was provided.  Jeremy remarked that I lack diplomacy when I taste wines I don't like. I disagreed, but said I couldn't lie when something was truly horrid. I purchased a wine carrier for the two wines we did purchase at other wineries and had to carry home in our luggage.  We made our way quietly out the door with our loot of wine glasses and opener kits before they could ask us to join their wine club. 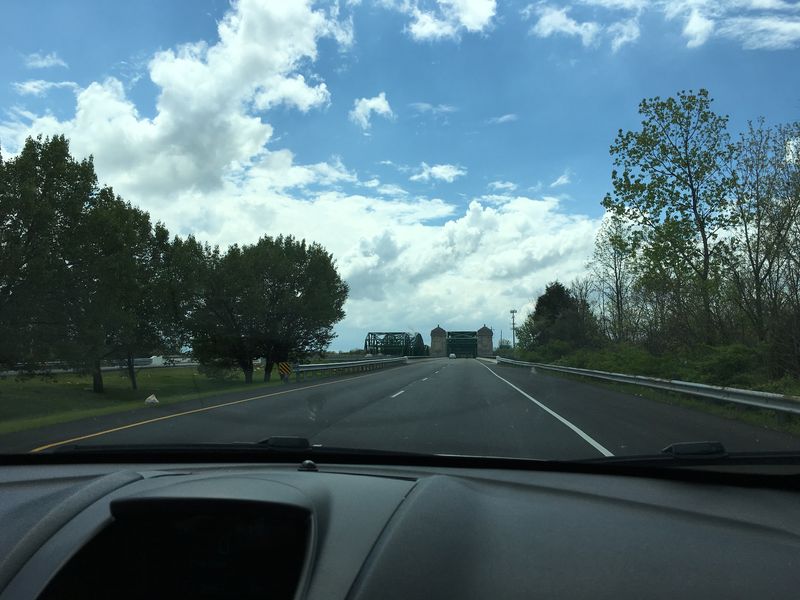 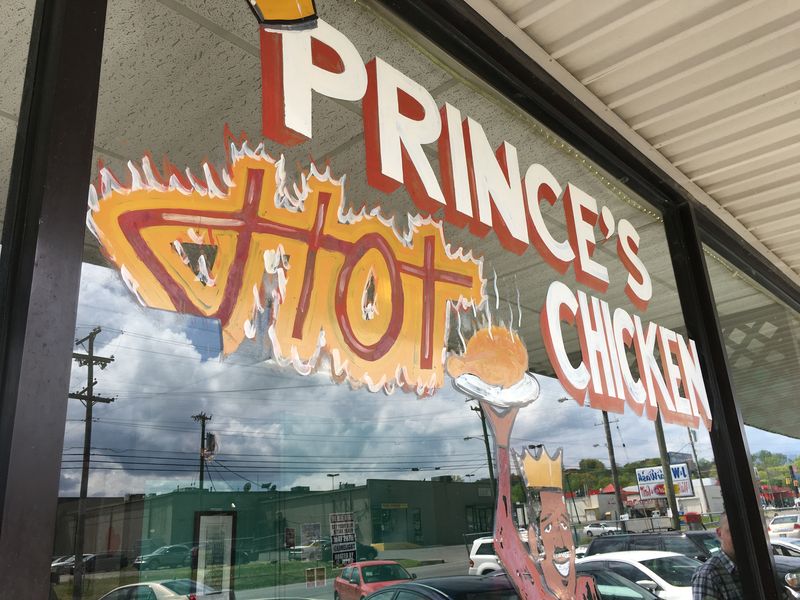 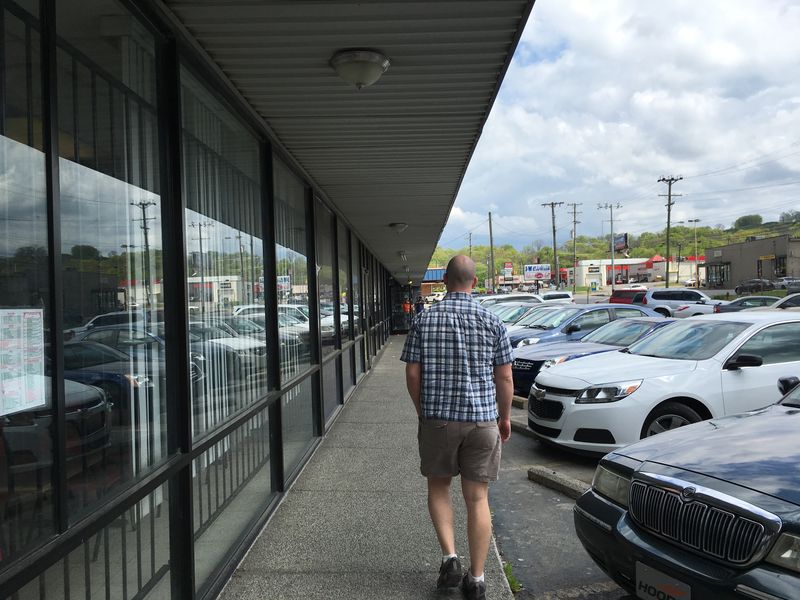 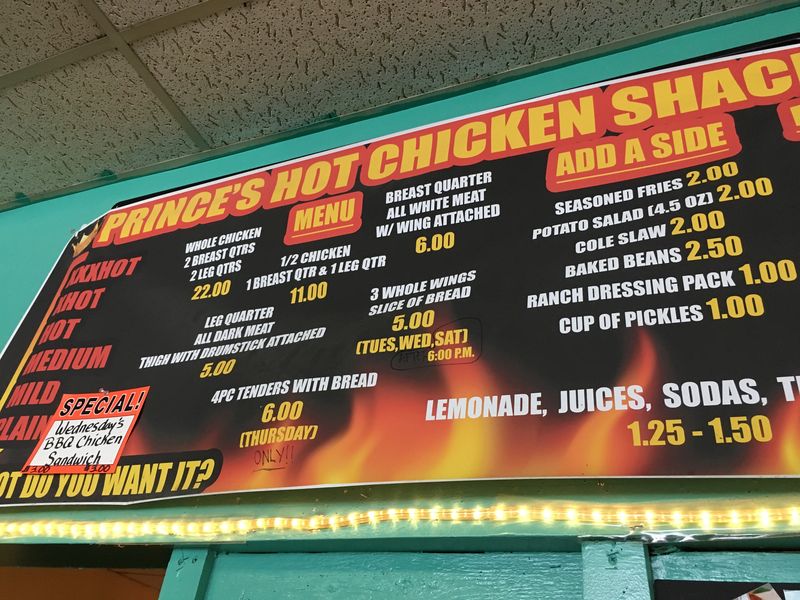 You order from this menu choosing the temperature of your chicken.  We all chose "hot."  I got the breast quarter, and Jeremy and Dan each got a leg quarter.   Then we waited. 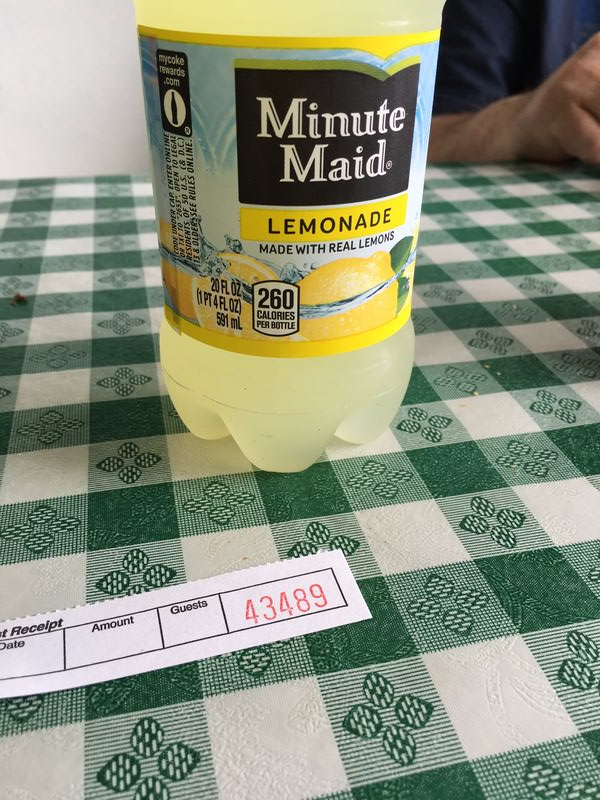 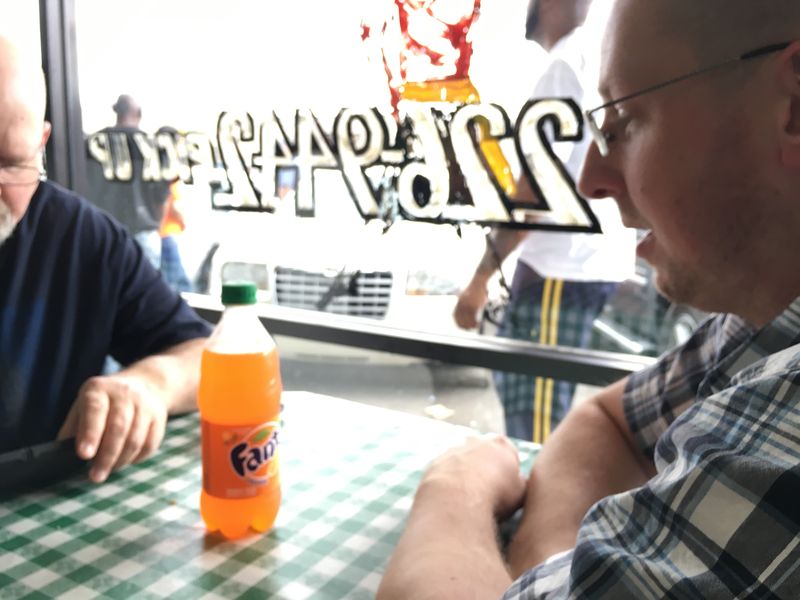 And at least 100 people appeared to come in after us. 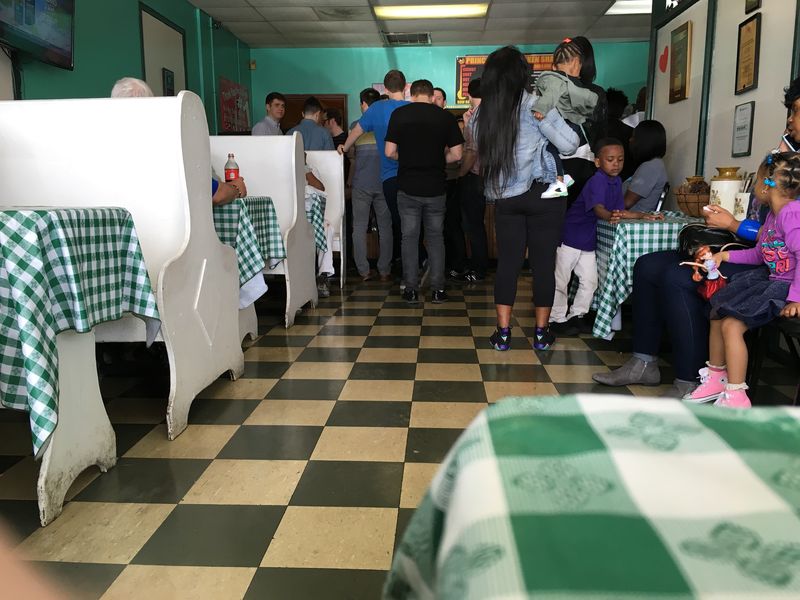 Apparently 2pm is a good time to get hot chicken.  45 minutes later we got our order of chicken and a side of pickles. 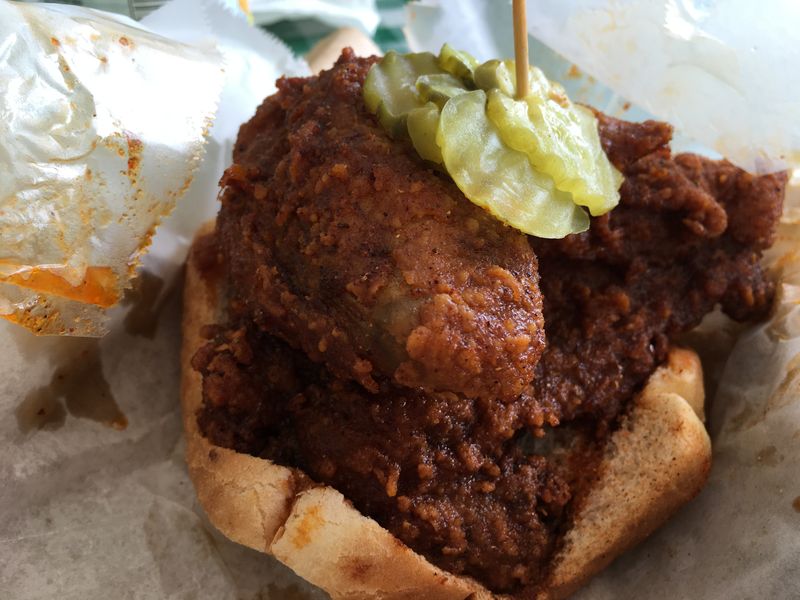 It was deliciously hot crispy but not greasy in the mouth.  It was greasy and spicy to touch as just carrying the bag to the table my hands were soaked in goo – but for some reason that did not translate to the bird.  I believe I could go all the way up to Xhot on the menu now, and if I lived in Nashville I would definitely try, but I might get it take out so I could drink a beer with it to manage the heat. The closest thing I've had to this experience was the tandoori chicken I ate in New Dehli.  It was hotter, but had the same rich pepper flavor – so it wasn't hot just for hot's sake, it had a deep flavor of pepper, as only a good nightshade soaked piece of chicken can have.

Meanwhile, we called the rental car company and lied to them saying we were running behind because of traffic and we needed another hour to return it.  Chicken shack line is a kind of traffic – but really we needed just a little more time so that we could check out the Willie Nelson museum just down the street before bringing the car back to airport world. 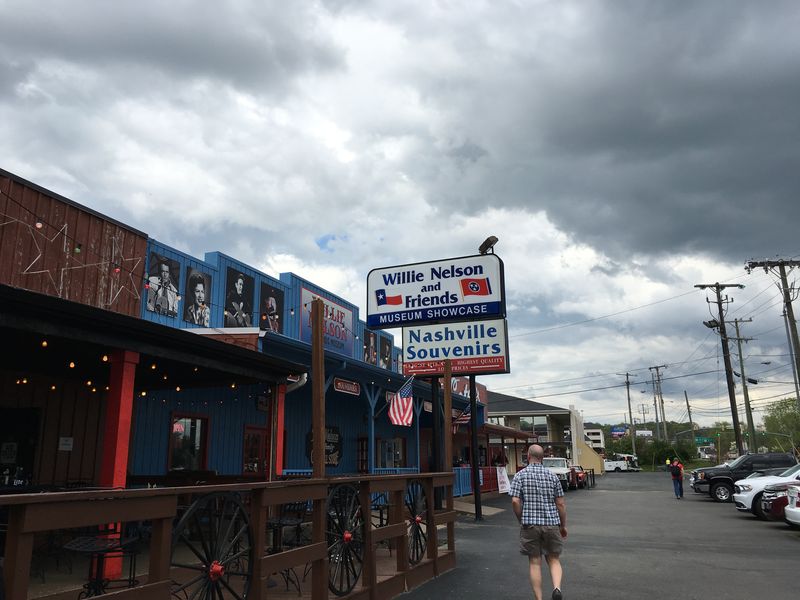 The Willie Nelson and Friends Museum was started by a guy who purchased a whole bunch of Willie's stuff in a tax sale.  It had a tiny admision price so we didn't feel bad literally running through it.  The gift shop was way bigger than the museum itself, and of course you had to exit through the gift shop to leave again. 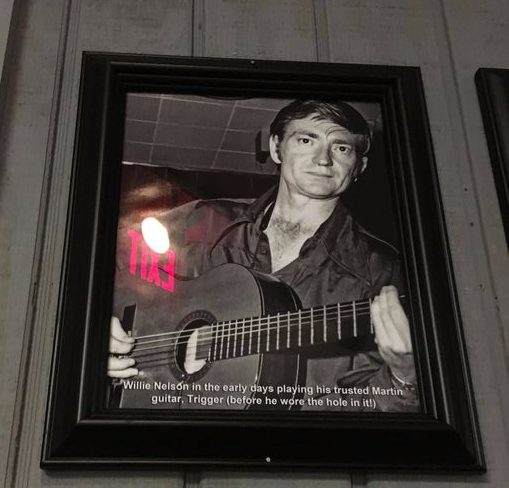 Here is a photo of Willie as a young man.  This was worth the price of admittance as I didn't believe he was ever a young man before – nor was there ever a picture of him available to make me believe. 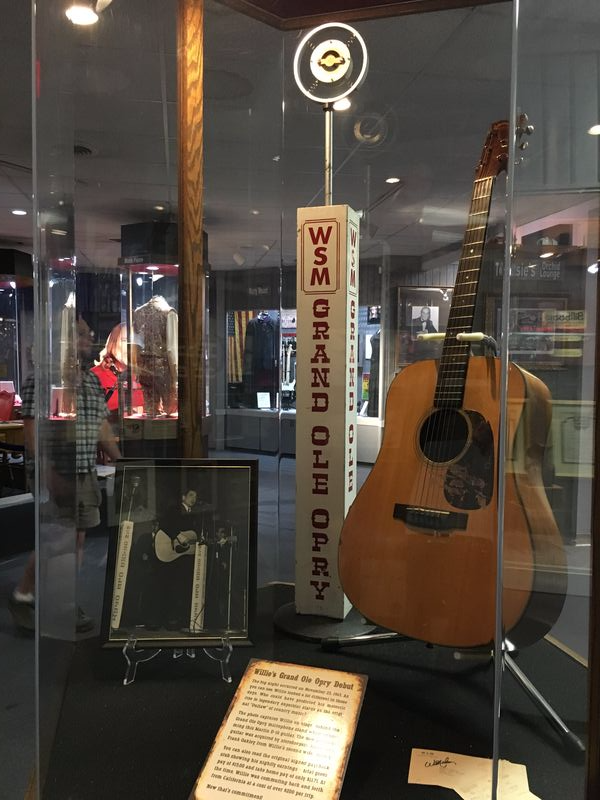 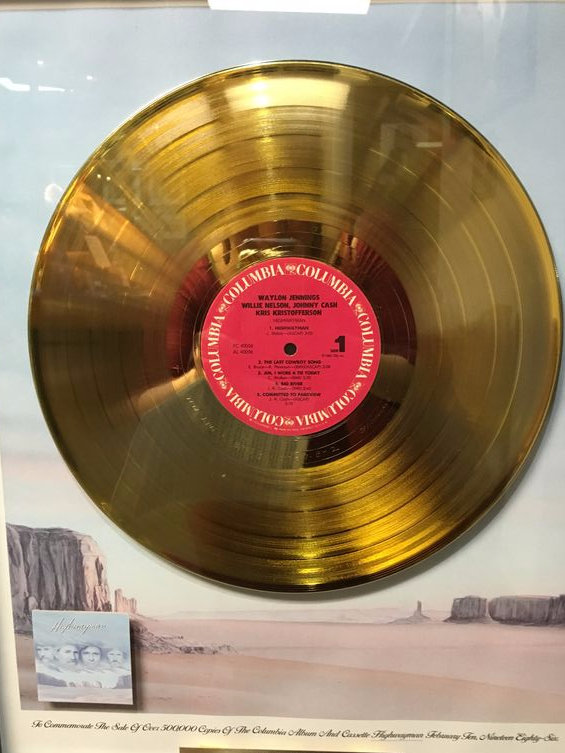 and his Highwaymen gold album. Some of his furniture 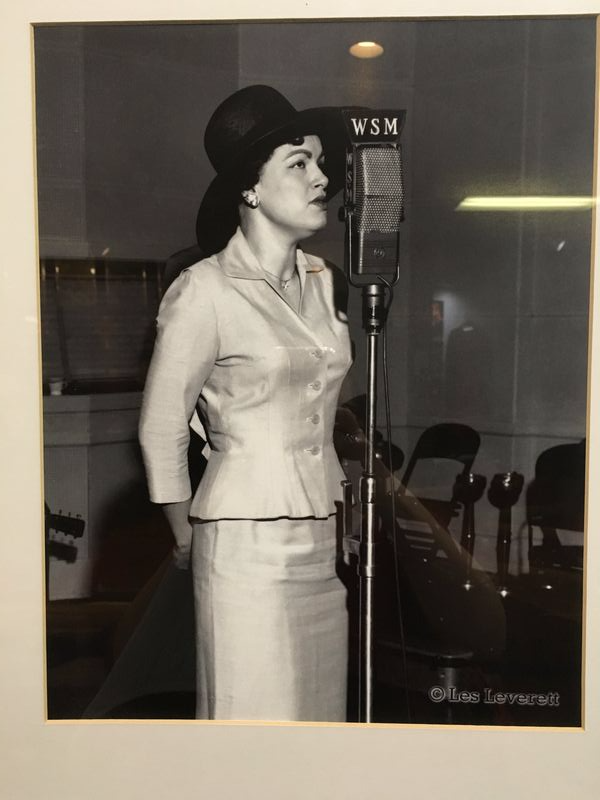 and an amazing photo of Patsy Cline recording. 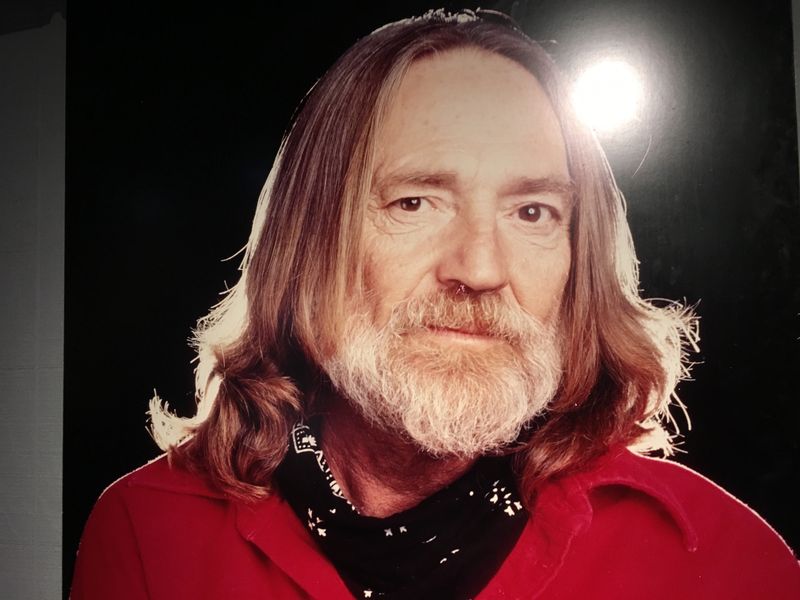 You could take a picture with glamour Willie, where it looked like you were sitting at the bar with him.

Right next door to the Willie Nelson Museum sits Cooter's.  A gift shop and free museum devoted to Dukes of Hazzard memorabilia. There is a replica of the General Lee sitting outside – if you pay three dollars you can get your picture taken inside it.  Not a bad deal in comparison to other photo opportunities I came across in Nashville and Pigeon Forge. 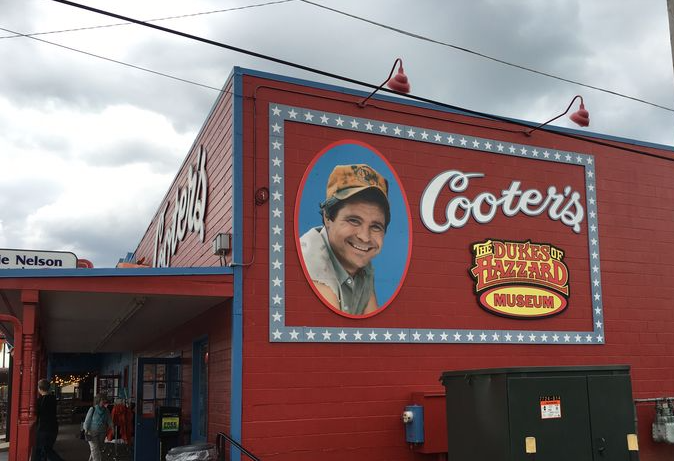 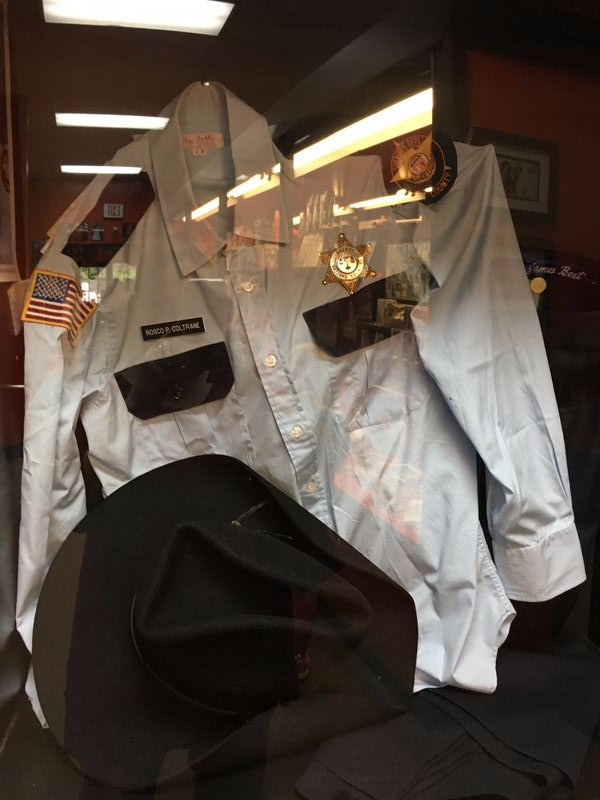 This was the only real artifact from the show, the uniform of Roscoe P. Coltrane.  The rest was a bunch of toys and celebrity photos from the time the show was popular. 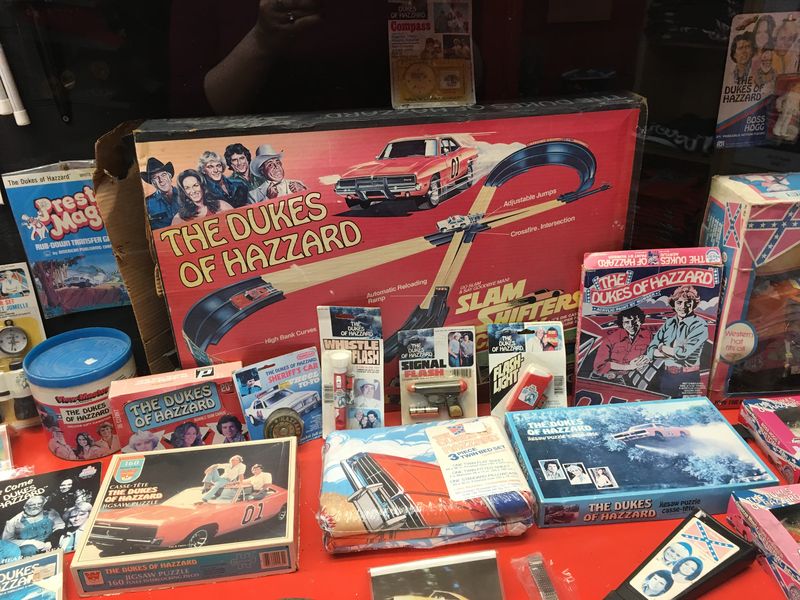 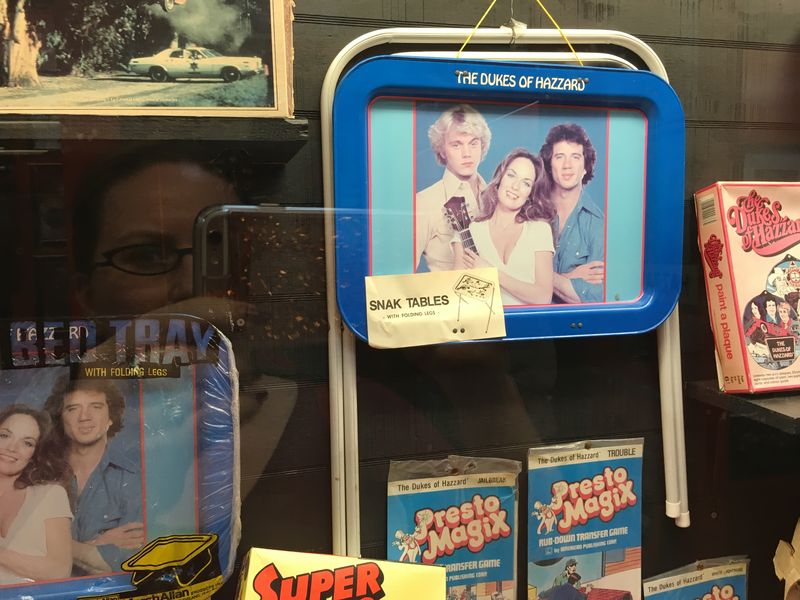 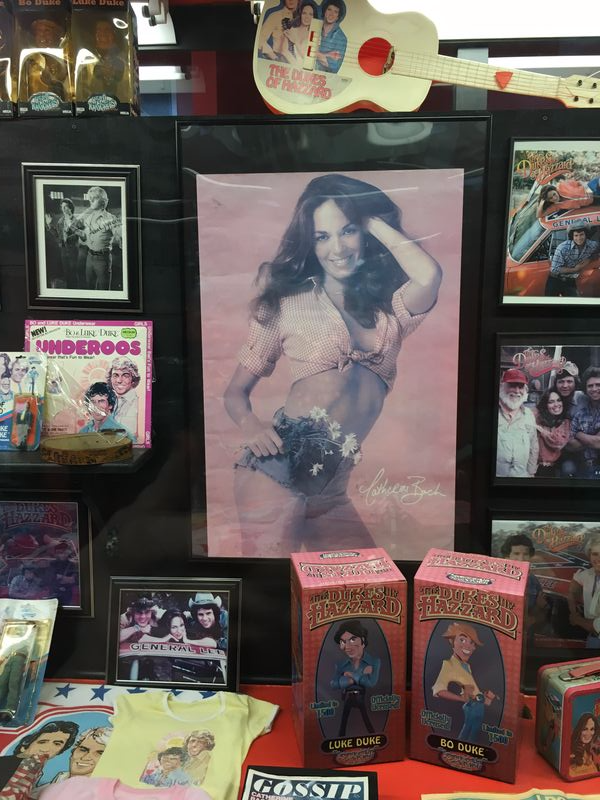 I watched the show as a kid without an inkling of the horrid stereotypes and gender roles being displayed within it.  Luckily the memorabilia doesn't speak.  I can't watch reruns of the show. 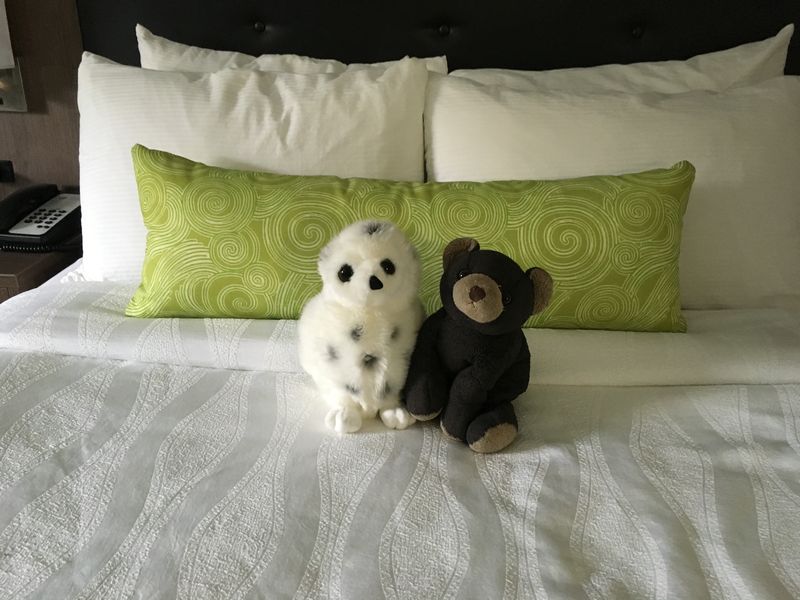 We made our way to the airport hotel that would be home for the last two nights of our journey.  It was supposed to  be a BNA brand (whatever that is), but what we found was a place in the right location with no sign.  I went in to make sure my hotels.com reservation would be and honored and it apparently changed to a Best Western very recently.  The lady behind the desk smiled and said, "It is lucky you found us."  No kidding.  The recently remodeled lobby and rooms were quite nice and Jimbo and his new friend Pigeon made themselves comfortable as we freshened up for our evening at Catbird Seat.