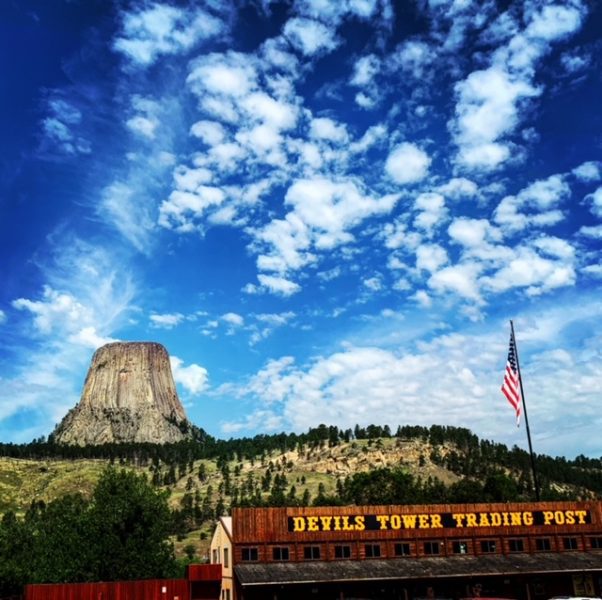 After the hub-bub of crossing South Dakota I found myself in the Wyoming countryside surrounding by thousands of deer. As the sun set, and I attempted to drive to my campsite for the night, all I could think about was their sheer number and the likelihood of me hitting one. So I slowed down to a very slow crawl and eventually made it to the campground, which was, not quite what I thought it was, but did have the benefit of me being the only camper, so there was that.

Charlotte and I settled in for the night, making ramen soup on the camp stove and listening to the Chronicles of Narnia on my iphone, as we batted off the bugs in the pitch black night. Soon, there was only the sound of the crickets and lawn sprinklers to sooth us off to sleep. The next morning, we headed out on the road again after some farm fresh eggs and veggies, and camp pour over coffee. I made a peanut butter sandwich for the road from the bread and jam acquired from the farm in David, South Dakota, and called life good.  Tonight we would rest our heads in Billings, Montana and between us and there was Devil’s Tower, The Little Big Horn Memorial, a lot of deer, and many miles of highway. 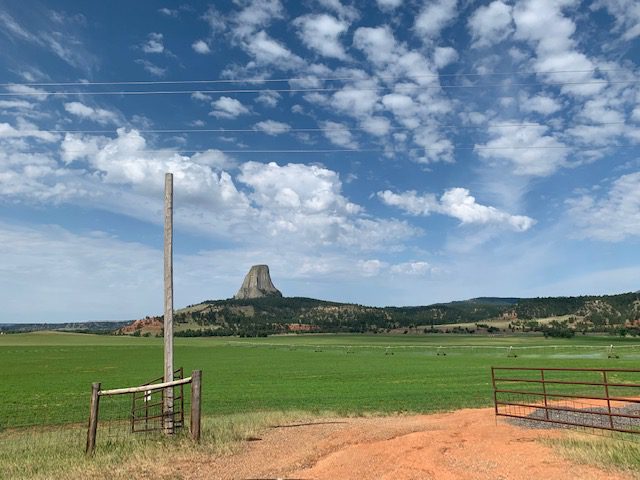 In the nine miles between my campsite and Bear Lodge (one of the native names for the magickal place renamed Devil’s Tower) I stopped 8 times to allow deer to cross the road, at whatever pace they wanted to take to get out of my way and allow my car to safely pass.  I was in no hurry to slaughter deer or myself. 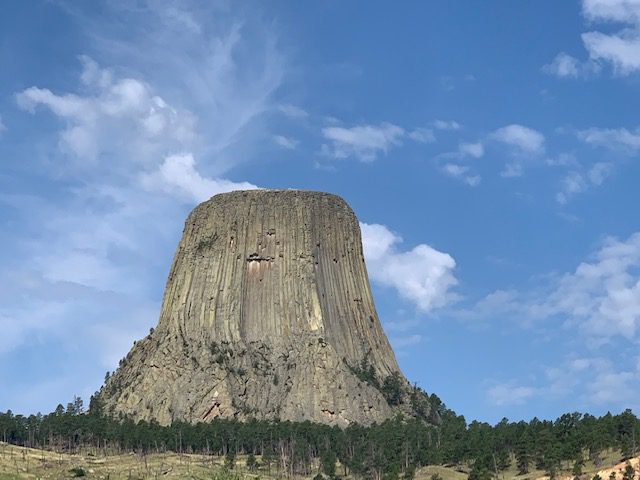 I took the opportunity to pull over and take pictures of Bear Lodge from the side of the road at different angles. When I finally got to the entrance of the recreational area, I changed my mind about getting any closer. The signs of the upcoming motorcycle rally and other types of rallies were already causing massive traffic back-up and an entire host of obvious bad choices.  So I just ran into the Trading Post to use the bathroom and buy a postcard/magnet. A venture which became an adventure in mouth breather avoidance. 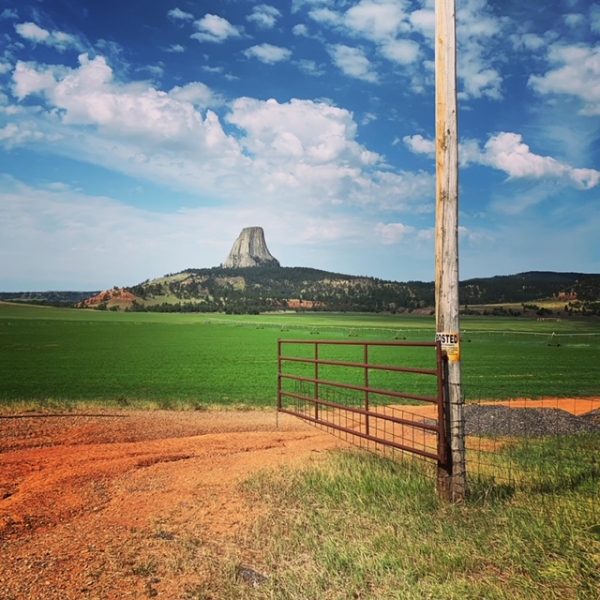 After getting back out into the fresh air, slightly freaked by peoples’ inability to appropriately socially distance, I ran for my car with the relief of a person not used to being in anything close to a crowd. I took in a few more eyefuls of Bear Lodge, and promised myself I would look up more information about the place, and read the book of legends I managed to grab from the Trading Post when I paused for the evening.

Devil’s Tower was the first National Monument ever created. It was so declared in 1906 by Theodore Roosevelt. It is also an ancient sacred location of  indigenous peoples – multiple different tribes have stories about it. It is not just the site for Close Encounters of the Third Kind, it is something truly special. Perhaps the magnetic appeal of this 64 story tall piece of geological wonder is why Spielberg chose the butte for his movie location. It definitely holds beauty and mystical appeal. It is also clearly attractive to humans who flock to it for reasons that vary from camping, motorbikes, to ceremonies like a camper bug light. I would like to get closer some day when I’m not trying to stay ahead of the Sturgiss Rally in a pandemic. 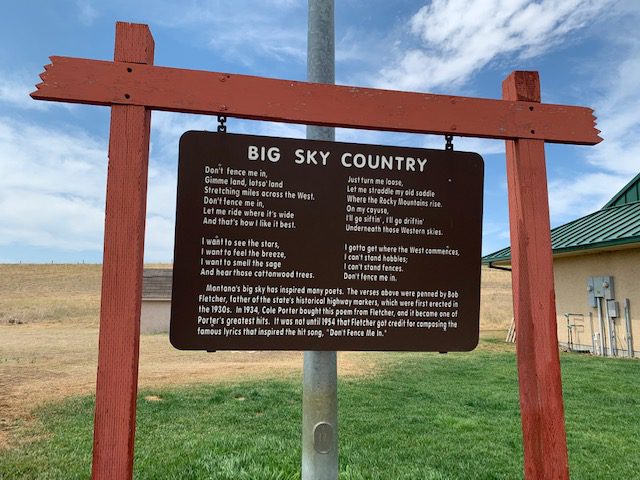 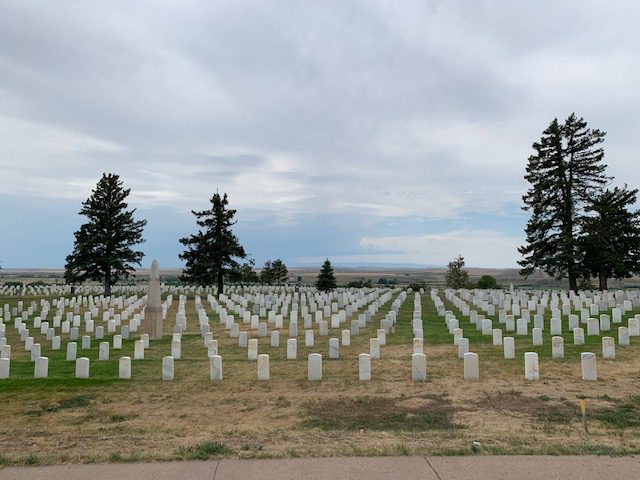 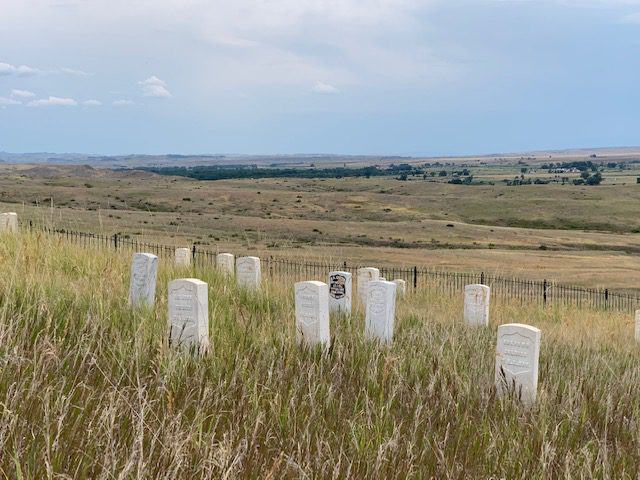 Leaving Wyoming behind me, I crossed back into Montana, almost full circle now, to retrace my steps back along I-90 home to Washington. But first there was the Little Big Horn National Monument.  Once upon a time this monument was labeled The Custer Battlefield Memorial, as if that self-consumed Black Hills gold chasing narcissist was the only person who died there.  It is now renamed (since 1991 under George Bush the first) The Little Big Horn Battlefield National Monument – and the grief on that ground is palpable. The tragic death of so many (both the young men of the calvary and the indigenous warriors who fell) still rings from the soil. Because none of them had to die, but for one man’s greed and hubris. 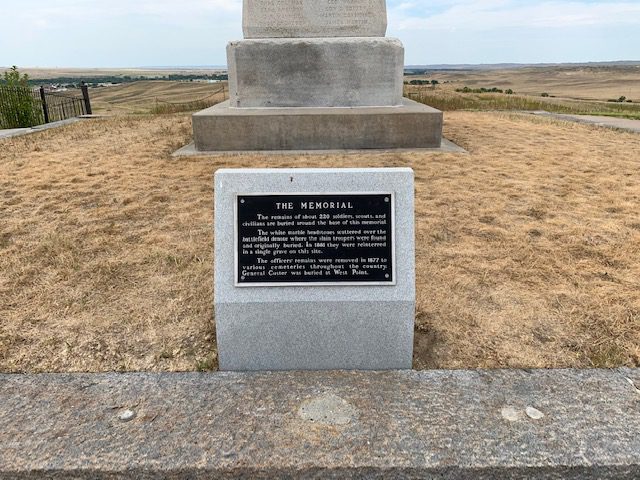 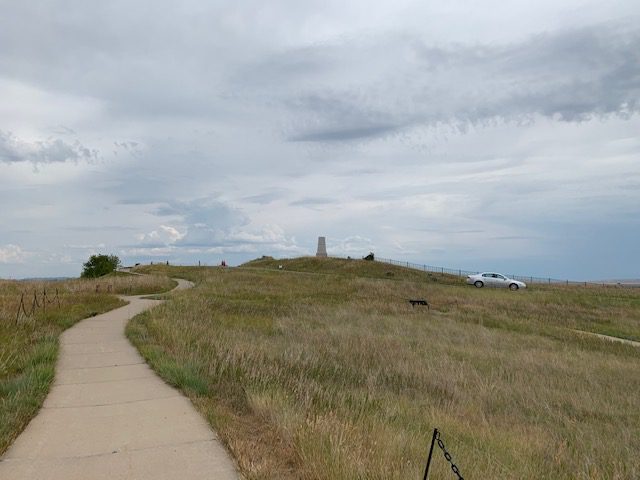 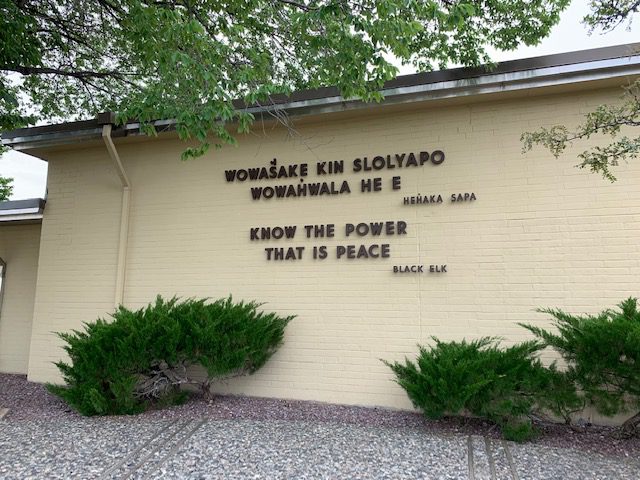 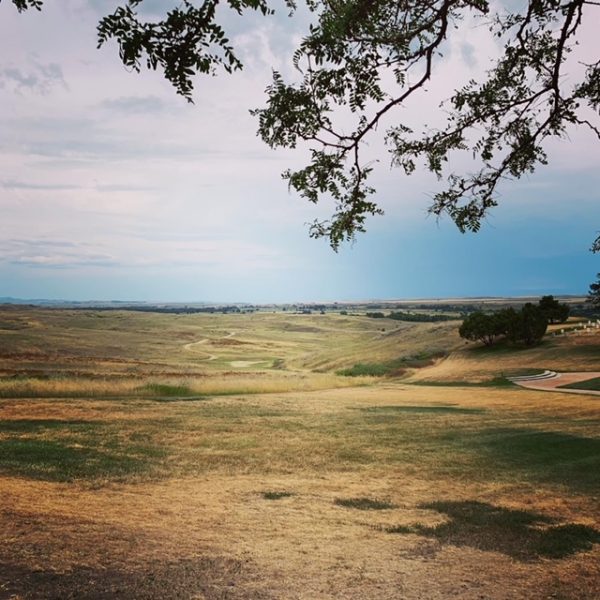 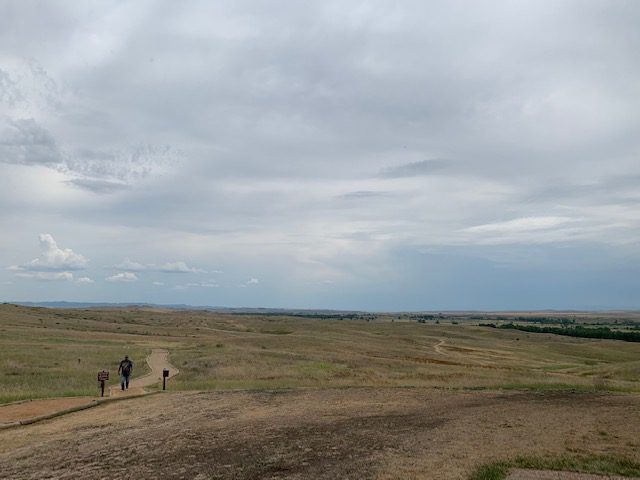 The Native American memorial, now on the site since the early 90’s is a beautiful tribute to unity, and the pyrrhic victory the Souix and Cheyenne warriors pulled off that day to stop General George Armstrong Custer from undertaking mass genocide.  This place holds the energy of the death of a way of life – not just the bits and pieces of the hundreds who died on the field that day memorialized with different colored markers. The space holds a similar energy to the Battlefield of Culloden where the Highlanders were slaughtered in their attempt to reclaim their place in the British hierarchy, and not soon thereafter begins the Highland clearings.  Which ironically, is the reason so many Highland Scots populate the New World to eventually be the ancestors of some of the young men who died at Little Big Horn. I found myself staring over the battlefield, a daughter of America with genetics who walked the Trail of Tears, danced around monolithic stones in the Celtic isles, and pulled their caravans from slavery to populate the Balkans – mourning all of them, and the demi-gods of greed that live inside human to shape our history into these bloody memories. 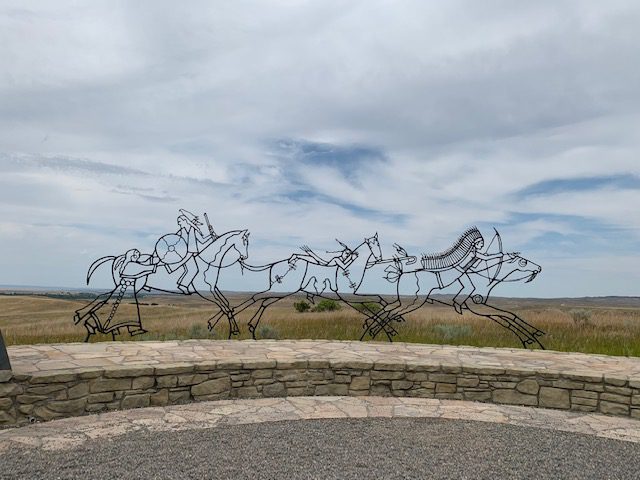 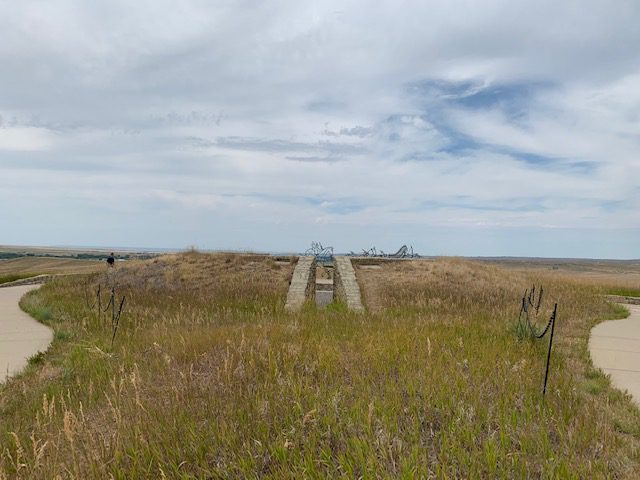 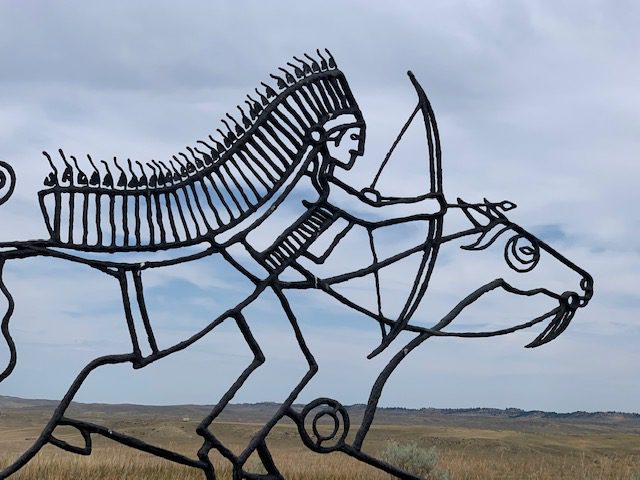 The memorial in this space though, and the focus on unity to preserve, to join together to create something together, is beautiful. It is unfortunate that war against an external foe had to be the catalyst for this – but sometimes something completely external has to come to wake humans up to the fact that we are in this together. It is strange to me that in the “united” states that we haven’t even begun to learn this lesson in the face of COVID 19. Instead, we dug in to our different sides of the Senate aisle, wave our Trump or Biden flags, politicize mask wearing and forgot how to care about each other. Can we all go to a Battlefield memorial, with the correct understanding of the motivations of men that brought us to that moment, and reflect on how it doesn’t need to be this way? 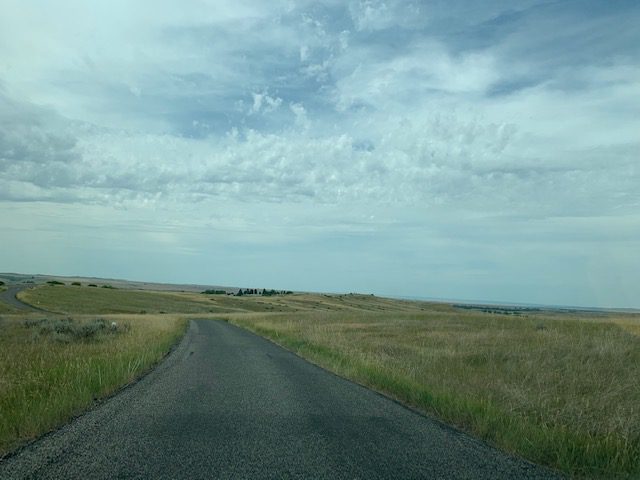 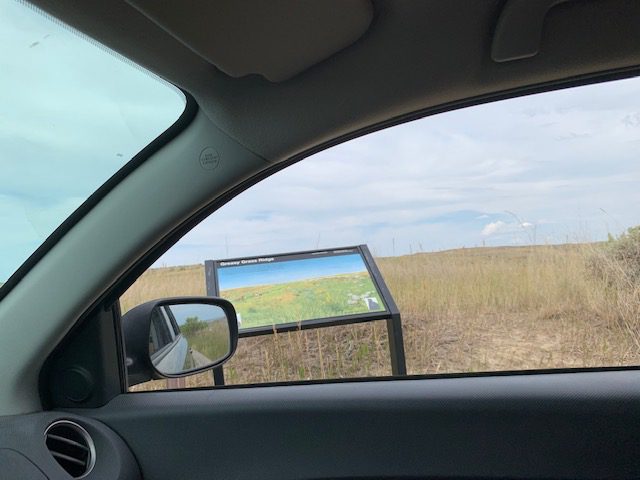 I digress. I didn’t tarry very long at the Battlefield, one, because it was very uncomfortable to be swimming in that grief, and two, because it was very hot out and my dog was not allowed to be with me anywhere in the park.  Charlotte was parked under a tree with all of the window of the car open and her little doggie carrier half out one of the windows.  It was unsafe for multiple reasons, though I would be shocked that one of the five other visitors at the park would steal my sparkling water, drooping peanut butter sandwich, or overheated chihuahua, it gave me reason to move quickly. And luckily, it being America, the interpretive route was also drivable.  So Charlotte and I took a loop with the air conditioning on to see the different sites of the battlefield, then we left and went to the Trading Post across the street for a lunch of Crow Indian Tacos from the Custer Battlefield Trading Post. They are apparently the best Indian Tacos in the region. 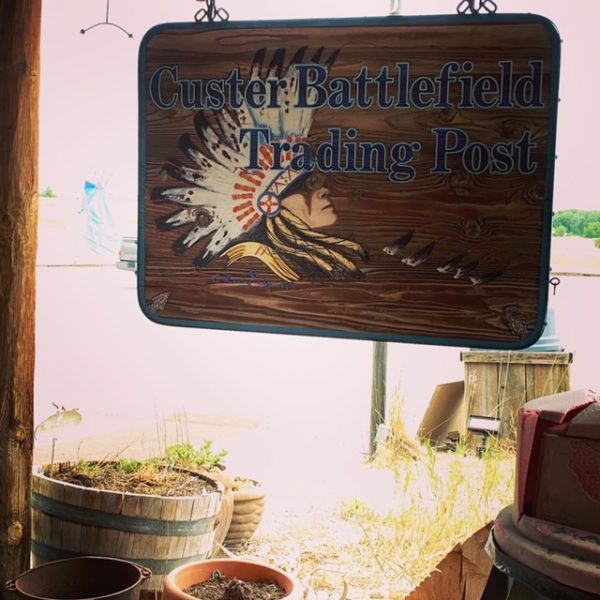 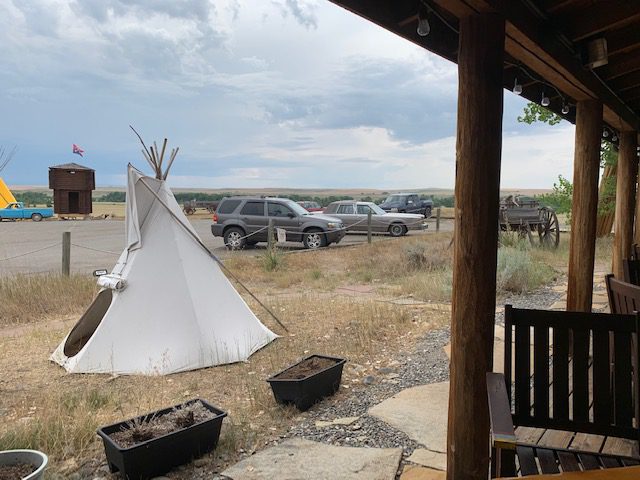 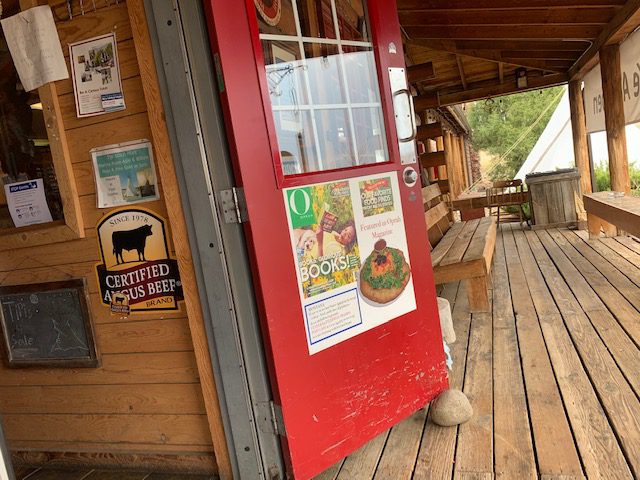 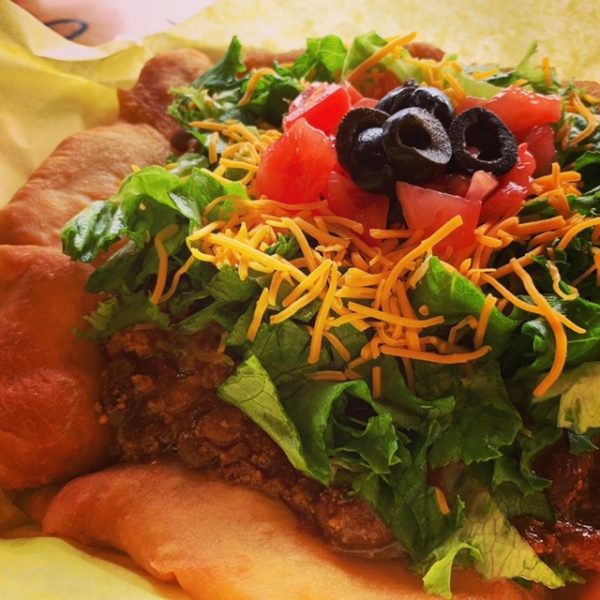 There was outdoor seating so Charlotte could sit with me and pant while I attempted to eat even a tiny little bit of the gigantic taco. Which was, amazing to taste. Beans and meat and spices and fry bread and romaine lettuce all blended together into a giant gut bomb of yumminess. It was not a light meal, and I still had to make it to Billings – now just a hundred-ish miles away – but still far enough. 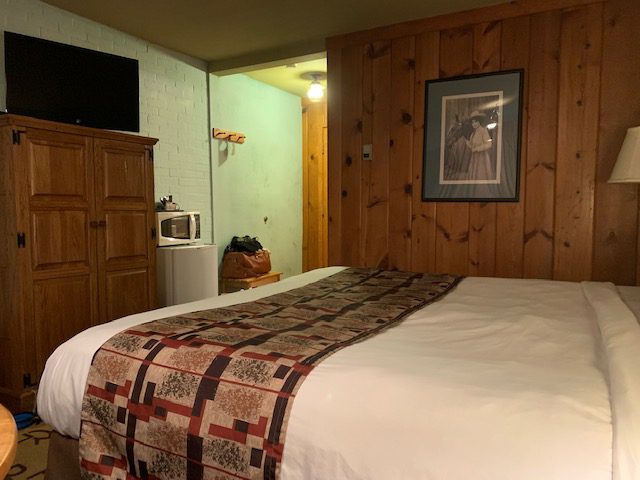 I made it to the Dude Rancher Lodge in Billings, Montana way before nightfall and relaxed with the rest of my Indian Taco, a sparkling beverage and a little bit of email catch-up.  I even tried to use the jetted tub in the bathroom – which didn’t work out so well, but I give myself an A+ for trying out the amenities of the strange throwback from an era that may never have existed. The King size bed and shower were nice though. 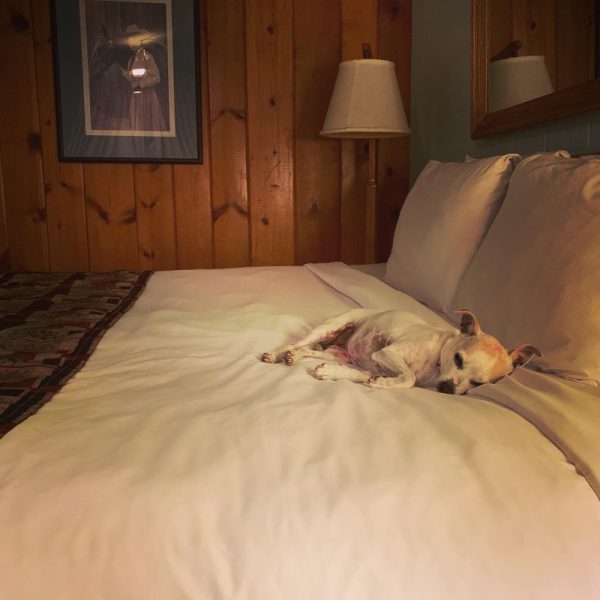