I made a fancy hotdish! Well no, not really, its closer to a goulash – but not of my native Minnesota variety. 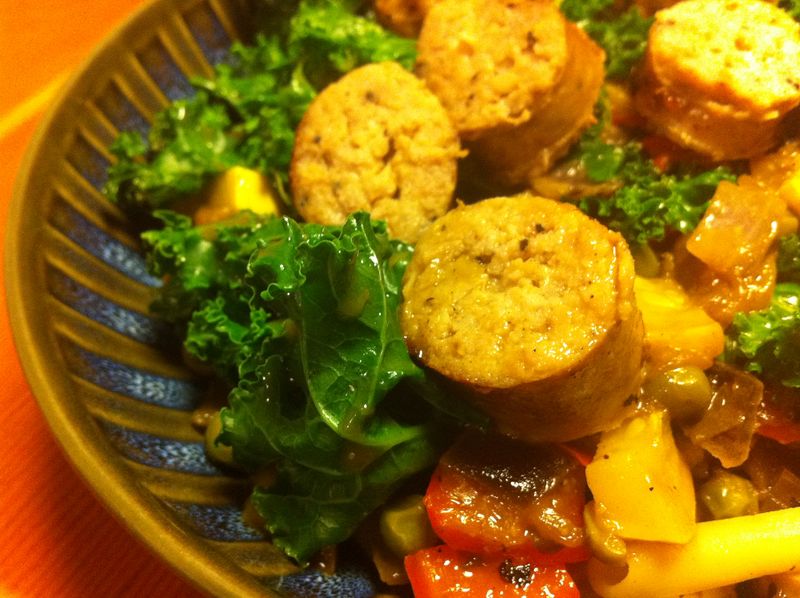 For fun I plugged goulash and hotdish into wikipedia and got very contrasting pictures of culture.  Here are the results.

Goulash (plural: goulash) is a soup or stew of meat, noodles and vegetables (especially potato), seasoned with paprika and other spices. Originating in Hungary.

Under the wikipedia entry for Minnesota goulash was a photo of a long table at some potluck function showing multiple jello salads and a few mystery cassorole looking items followed by this paragraph.

Also common is a dish known as goulash, though it bears no resemblance to the familiar Hungarian goulash. Minnesota goulash is usually made with ground beef, macaroni, canned tomatoes, and perhaps a can of creamed corn. 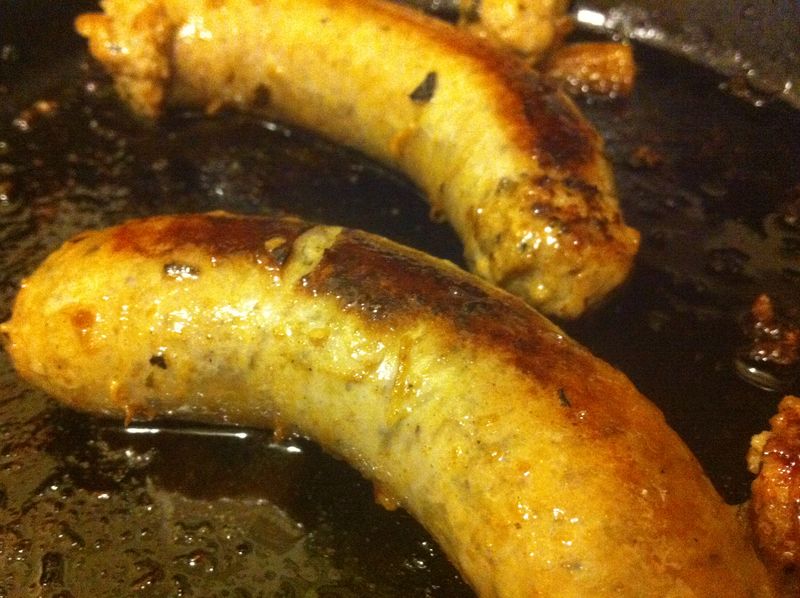 Growing up in Northern Minnesota I did not automatically know that other people in the United States (I assumed other countries did eat differently) did not eat this way.  How many ways can you see macaroni, canned tomatoes and hamburger?  Many, many, many ways – followed by different colored Jello salads.  I am not exaggerating and when I find Minnesotans abroad from our home state we can always bond over stories of an aunt's carrot and tuna jello salad or some type of potato chip what not with cream of mushroom soup hotdish.  We are caricatures of ourselves in some ways. My goulash adventure was inspired when I found on my local grocer's shelf a package of potato sausage with the sticker proudly stating "We make it here!"  I was compelled to make the purchase for so many reasons – but the main being a flashback of family sausage making parties of my youth where pork and venison were ground together with potatoes and stuffed into sheep intestines to make – you guessed it – potato sausage.  There is something extremely homey about potato sausage especially when you have made it by hand with your family.

The trouble with my impulse purchase was making something exciting with it – so I went back to my roots and let the Minnesotan kick-in with a Northwest twist.  Kale goulash. This goulash featured no canned items – it did however, include some frozen peas and homemade onion broth. 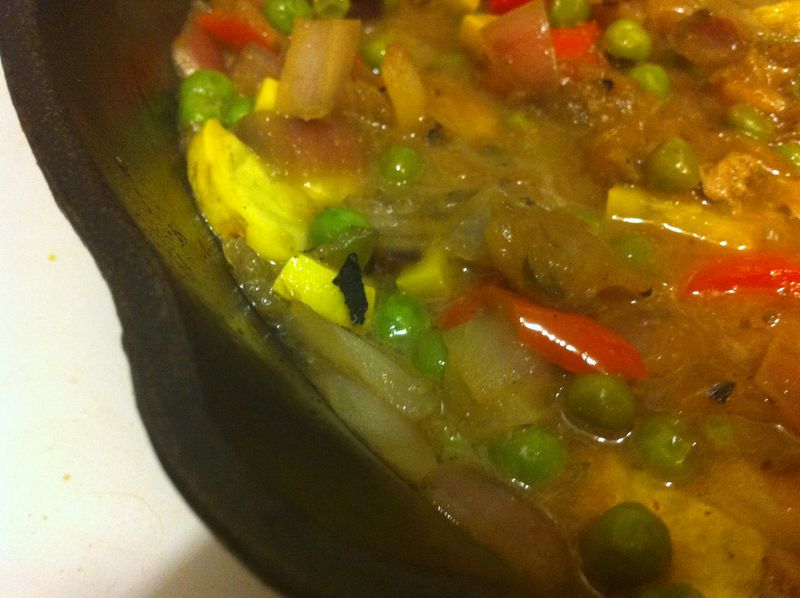 If you ever happen to have these random items lying around I encourage you to give this noodle salad a try.

Step 1: Get the sausage cooking in a pan with water (or beer – if you can do gluten). Cover the sausage and let steam until fully cooked.

Step 2: While the sausage is cooking chop the onion, red bell pepper, squash and kale.  Place the onion, red pepper and sauerkraut in a cast iron frying pan with a tablespoon of oil and saute until the onions are soft.  Next add the broth, peas and chopped yellow squash.

Step 3: Take the fully cooked sausage and transfer it to an oiled pan.  Brown the sausage then remove from heat and let cool then slice. Start your pasta.

Step 4:  As the sausage cools and the pasta cooks add the chopped kale to the onion and pepper mixture.  Do not stir just let it sit on the top and cover the pan. 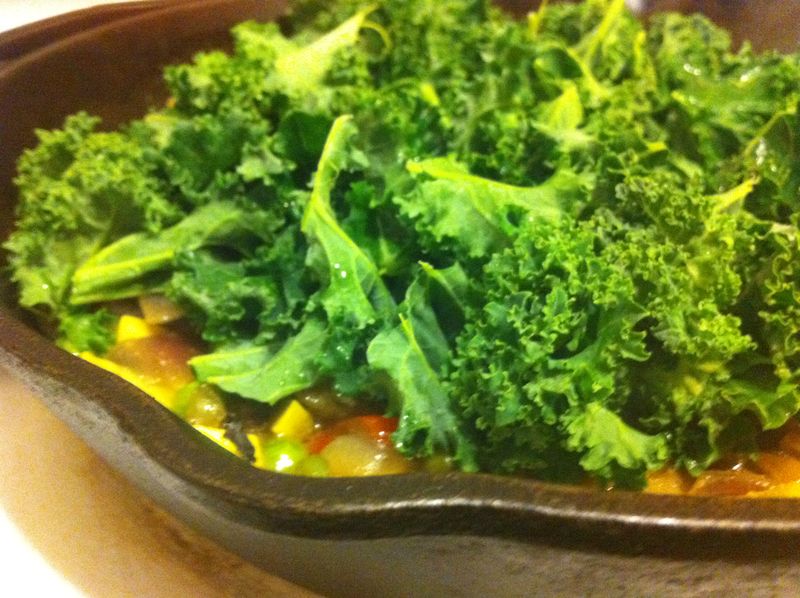 Step 5: Take the cooked and rinsed pasta and place in serving size portion in a bowl (about a cup). Scoop the vegetable and kale mixture over the pasta and top with slices of potato sausage. 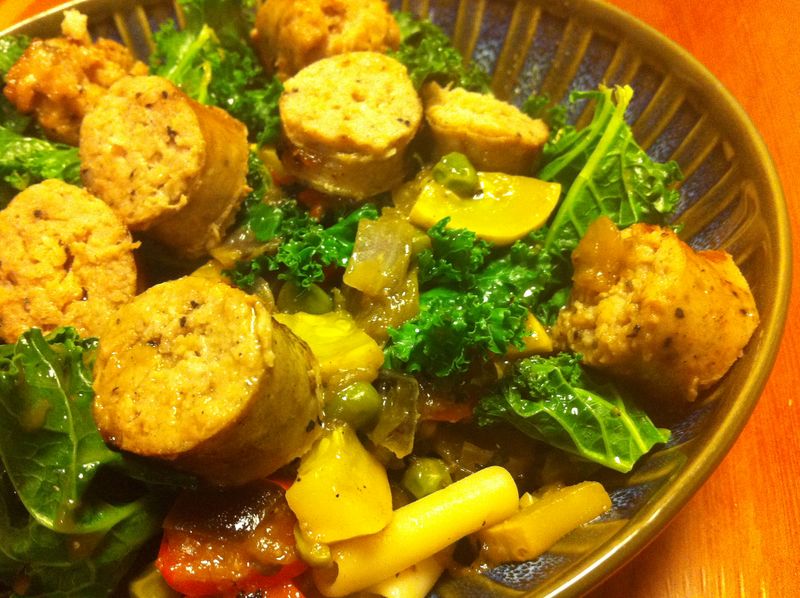