As you may have read in part 1 of this saga – I recently came into cabbage and a stoneware crock in which to place the cabbage for fermentation. 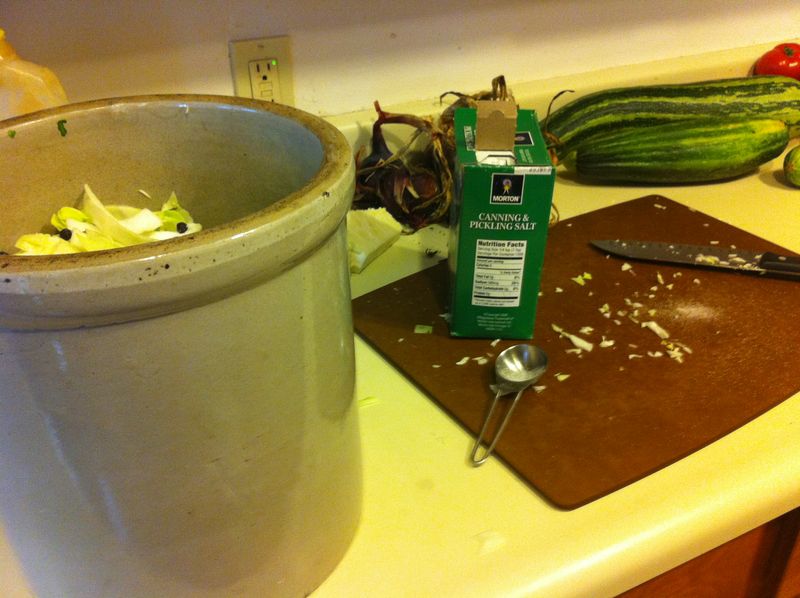 I grew up in Duluth, Minnesota and spent every summer of my pre-adolescent childhood at my grandparent's house located on Skyline drive.  Not only did they have an amazing panoramic view of Lake Superior, they had roughly an acre of gardens.  An acre of gardens – in a city!  To give you perspective here is a photo of Duluth from the view of the little house I rented for a brief stint living there again in my late 20's. 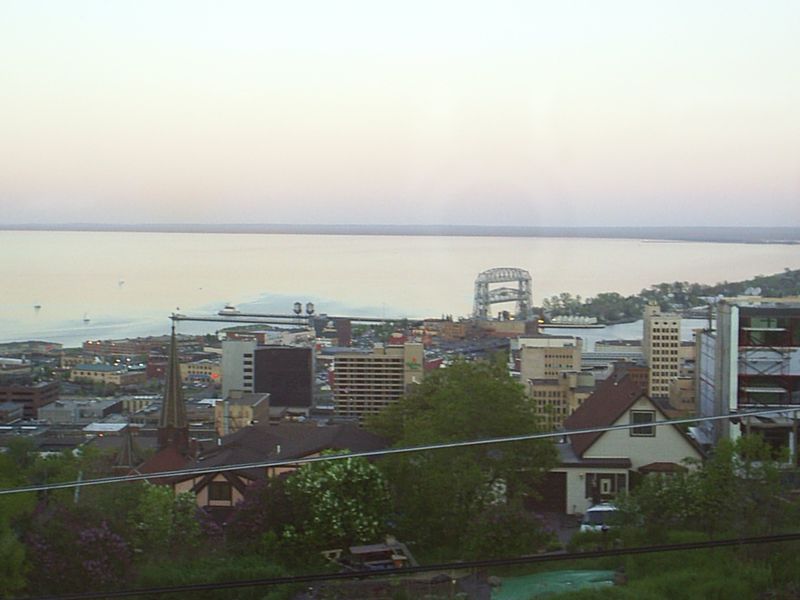 My grandparents were higher up on the hill and had less trees and houses in the way of the same view.  Here is a photo of the community garden in front of my former little house. 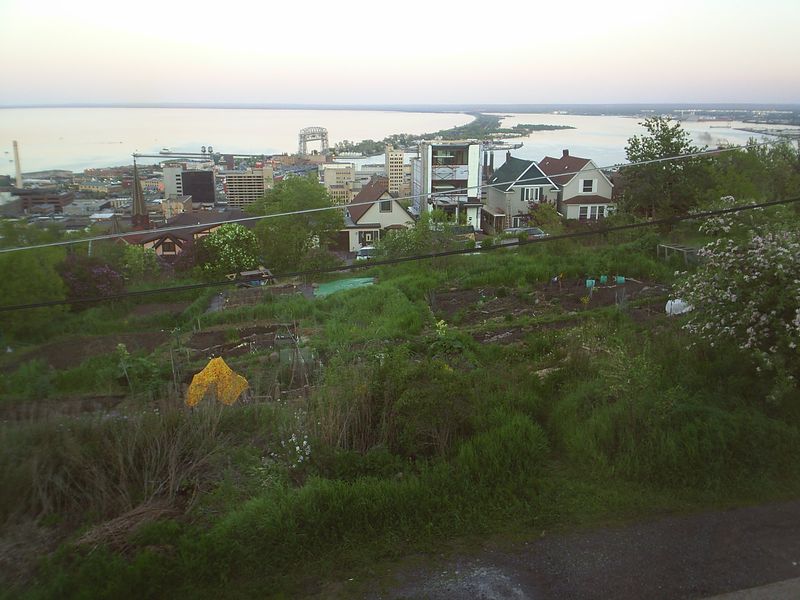 Now imagine this garden times six in size and you have the amount of land that my grandparents farmed on Skyline Parkway.

On this large urban farm (before we called it urban farming) my grandmother had a cabbage patch, a carrot patch, a bean patch, a tomato patch, an asparagus patch, a cucumber patch, a potato patch, a beet patch, a dill patch among many others.  Every year they grew a bounty of vegetables that fed us and the extended family (along with the venison brought in by the men folk every winter).  In the fall everything that could not keep was pickled – from cucumbers to tomatos.  There was also, of course, massive amounts of sauerkraut. 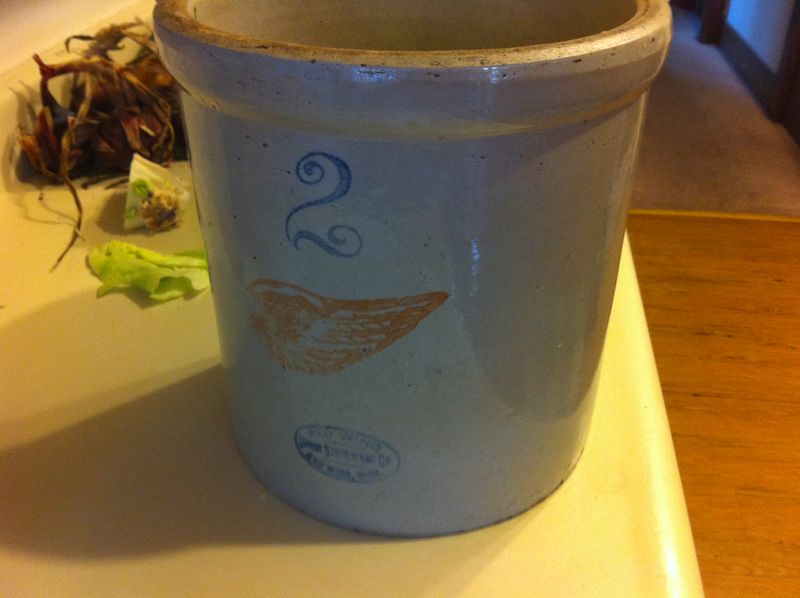 My grandmother had three stoneware crocks larger than my recent roadside stand purchase (above).  All three of the crocks came roughly waste high on a short 8-year-old.  And all three of the crocks had a batch of sauerkraut underway at various times of the summer and fall.  Interestingly enough, the crocks lived in the sunroom of the Skyline House – which made the room have a very strong, perhaps extremly stinky odor, during sauerkraut season.  Despite the stink, the picture of that room in my mind is a storehouse of childhood memory I treasure and apparently draw upon for many poems.

So after my kimchi warm-up I was finally ready to attempt sauerkraut.  Full on fermentation.  I had multiple cabbages both purple and white (the napa all eaten earlier in the season) so I chose a fine white cabbage of roughly 5 lbs of density. 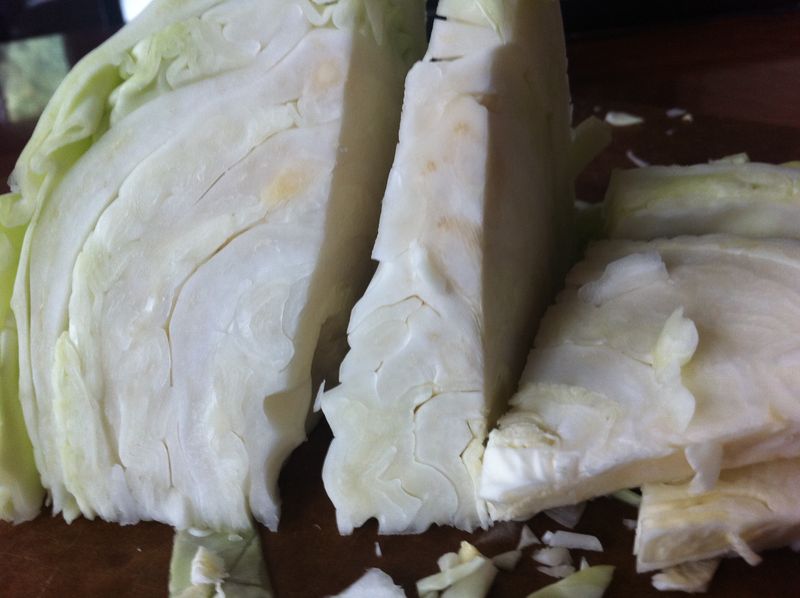 I again consulted Ms. Ziedrich's The Joy of Pickling and this time followed to the letter her recipe.

from The Joy of Pickling by Linda Ziedrich

Mix the cabbage salt and juniper berries together inside the crock. 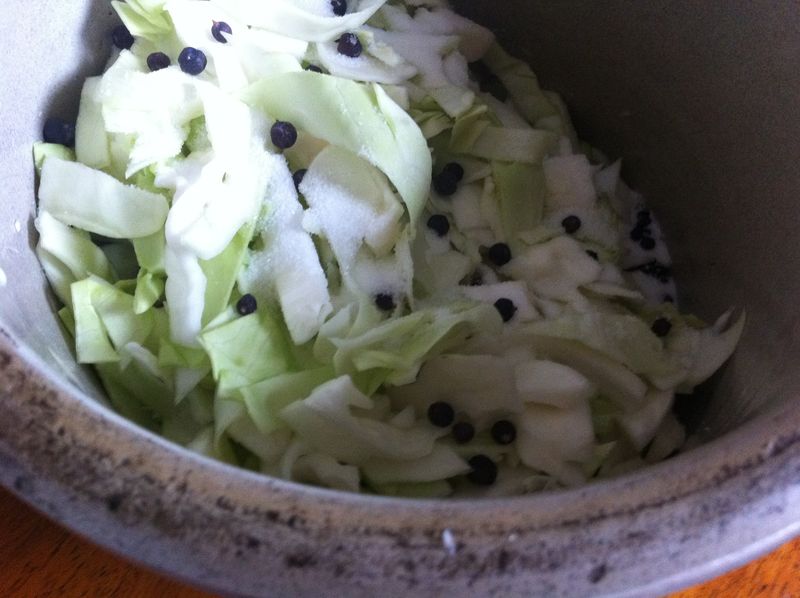 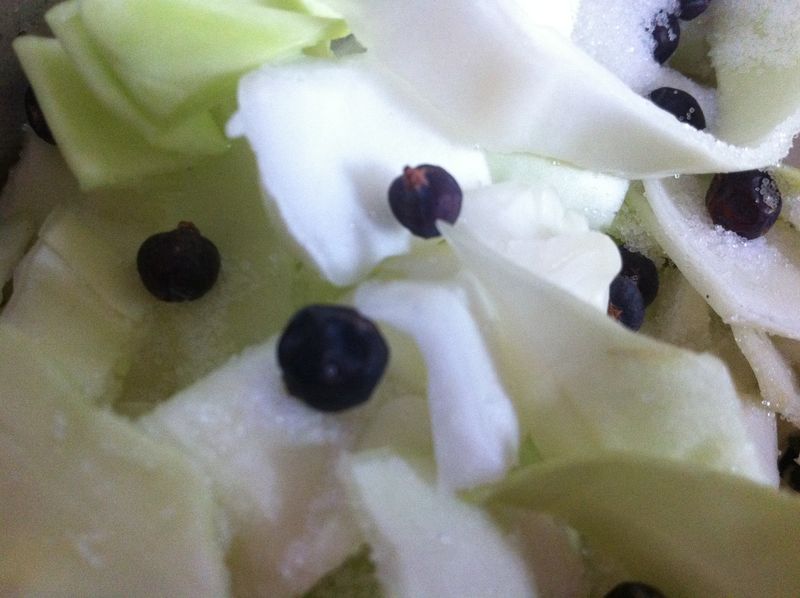 Next pack the cabbage using your hands or a potato masher.  Upon the packing of the cabbage it should begin to create liquid (brine).  Weight the cabbage to ensure that it is protected by its brine.

At this point in time during my adventure I realized that I needed bigger stones and smaller plates for my sauerkraut weights.  I improvised with a medium plate a big can of tomatoes and another plate.  Then covered my crock with a towel.

To get to sauerkraut the cabbage and salt must live together for roughly two weeks in a semi-cool location.  Fermentation began in my kitchen nook and upon a lovely stink emanating from the crock moved to my back porch.  After two weeks I had some lovely tasting, albeit horribly smelling sauerkraut.   Here is a shot of the partially eaten jar. 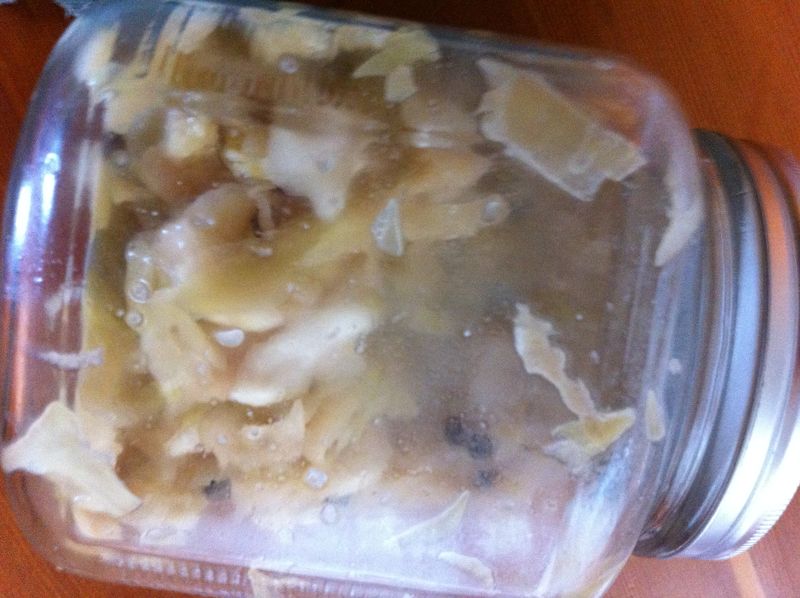 Am I now truly an urban farmer?  The sauerkraut rite of passage attempted and resulting in successful sausage accompaniment definitely resulted in a little more internal cred for myself – but I still cannot shake the awe of the work my grandparents put into food production and preservation on their urban farm on Skyline Parkway before anyone was writing books about eating your yard.