At the end of the summer growing season our little garden plot provides a formidable crop of cabbage.  Although cabbage is quite the hardy vegetable in that it can live for months in your refrigerator – an abundance of cabbage is an opportunity to engage in the time old tradition of food fermentation. 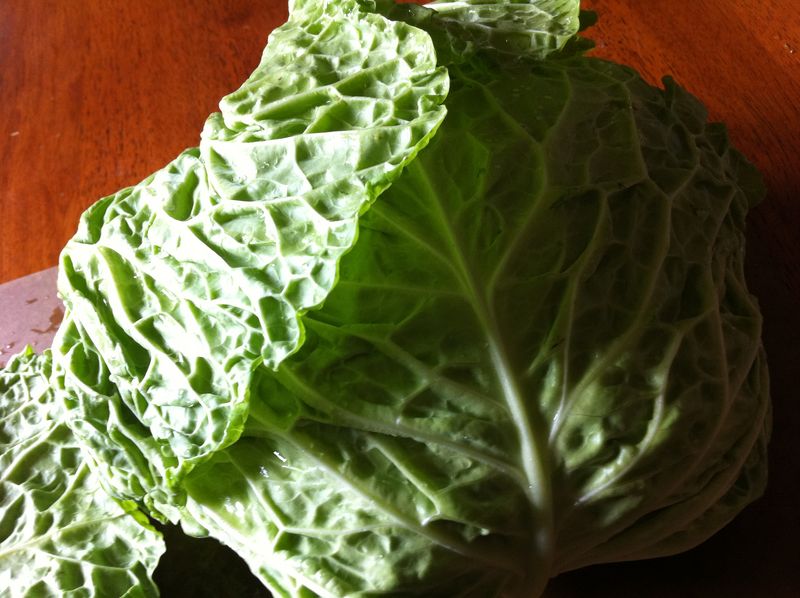 This July, after a little foray into poetry workshop and winetasting just across the mountains in the Yakima Valley, I stopped by a road-side fruit stand and discovered that it was the size of an average city supermarket.  The super fruit stand was not filled with local fruit (although they had a nice selection of Washington onions) but an entire trove of antique kitchen and housewares that could make a modern superstore shy away in shame.  To a girl raised on cast iron cookware I had found a place of delight – unfortunately my checkbook was not prepared (three cases of wine in the car poor) so I had to choose carefully from the bounty presented.  The choice ended up being easy -  before my eyes was the holy grail of fermentation vessels – a Red Wing Stoneware Crock. Until this point in time I was in state of training to pickle.  I spent practically a year mentally preparing myself to venture into the wide-world of fermentation.  Despite my purchase of The Joy of Pickling by Linda Ziedrich, and studious evening reading over its enticing pages – something was stopping me. I needed a crock.  Without the true vessel I was not ready. The acquirement of a crock would be the right of passage necessary to make the step into a world, that until now was only deservedly occupied by long dead beloved grandmothers.  My search previously felt futile as Seattle markets just did not provide any sign of anything that could be used to appropriately preserve my garden's gifts.  Then I fortuitously stopped by Selah, Washington's FRUIT & WINE stand where my search ended.

Heavy stoneware crock in hand I was finally ready to engage in a tradition as old as cabbage farming itsef. As my warm-up for sauerkraut I first attempted cabbage kimchi.  Kimchi can be made with any type of vegetable the word itself connotates simply Korean pickle. Kimchi is eaten at every meal in Korea and its nutritional benefits are well studied.  Fresh cabbage kimchi is more nutritious than its unfermented cabbage counterpart as its levels of vitamins B1, B2, B12, and naicin are doubled.  Cabbage kimchi differs from sauerkraut in that it is made from chinese cabbage as opposed to white cabbage, it is spicy from generous amounts of red pepper and ginger, and it is fermented for a much shorter period of time so it does not get as sour as its western kraut cousin.

In this particular recipe I followed the guidance of Ms. Ziedrich's recipe for Basic Cabbage Kimchi but I added significantly more of the flavoring ingredients.

I started with a chinese cabbage (otherwise known as napa cabbage) from my garden.  The cabbaged weighed in at roughly 3 lbs. 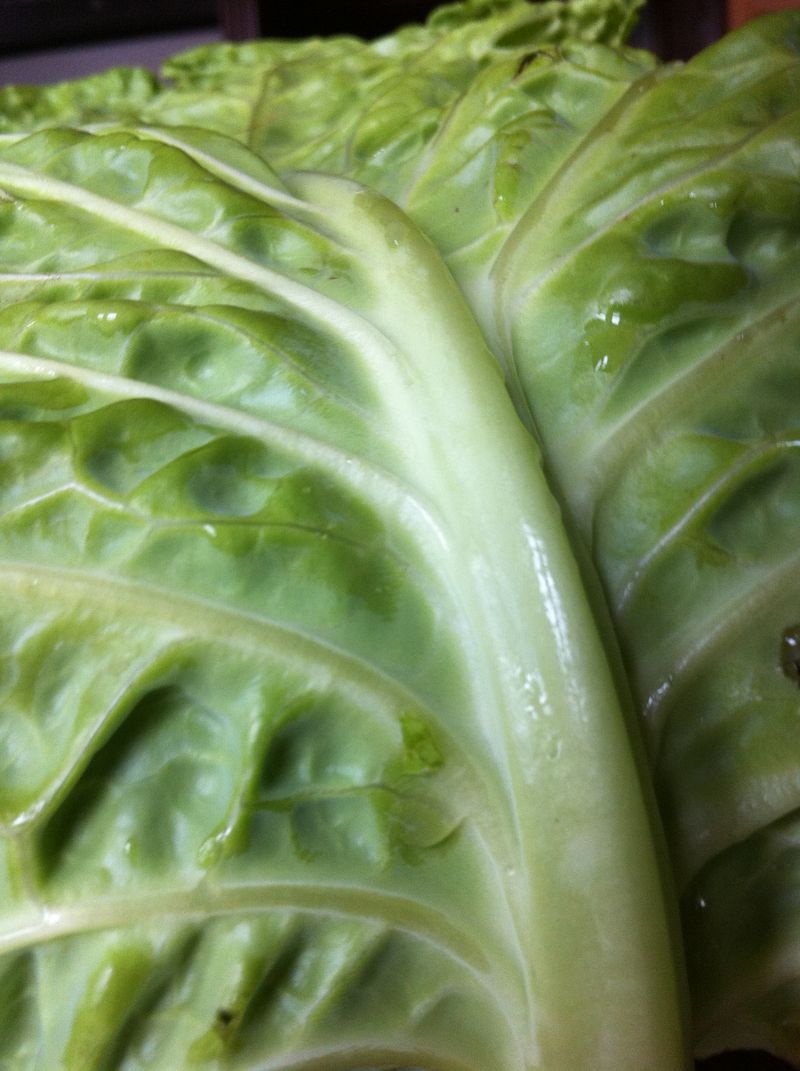 I chopped the cabbage into 1 inch pieces and placed it in the crock with salt brine to stand for 12 hours. 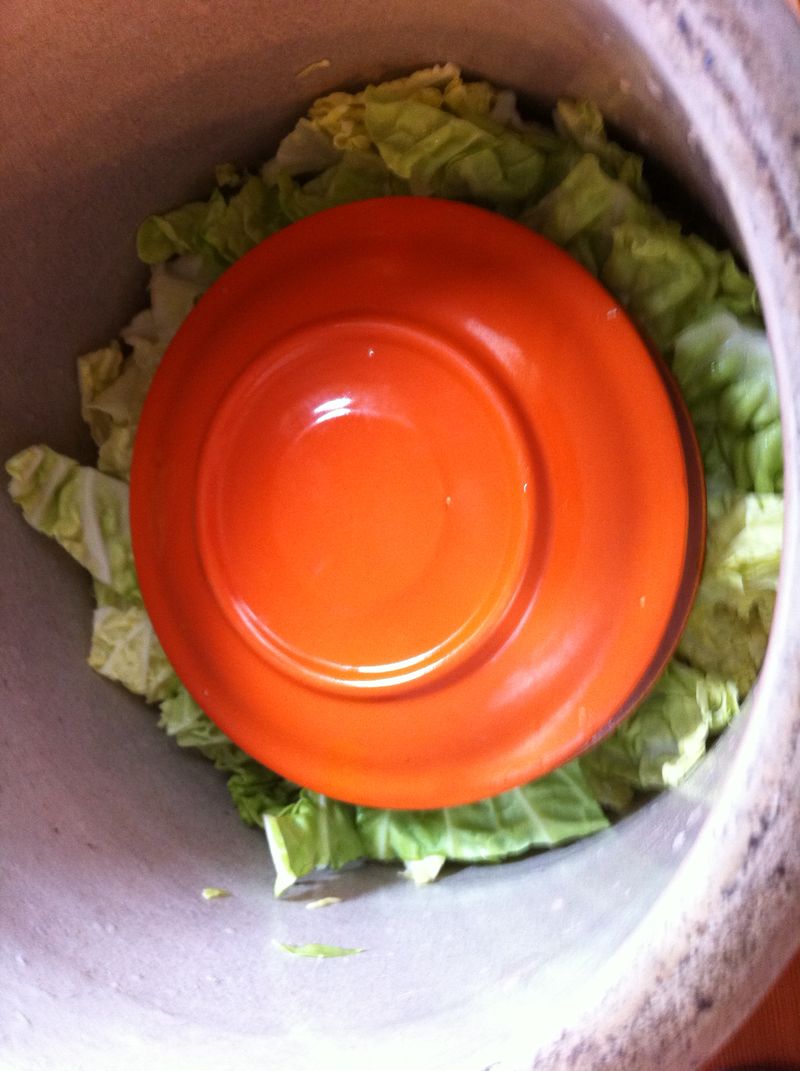 The next day I chopped garlic, garden fresh shallots, and ginger and added them to the cabbage along with a heaping helping of ground red chili pepper.  (I did not have traditional Korean ground dried hot pepper – instead I used the standard western red chili pepper flakes featured in pizza establishments and existing in bulk proportions in my cupboard for rubs and other recipes). 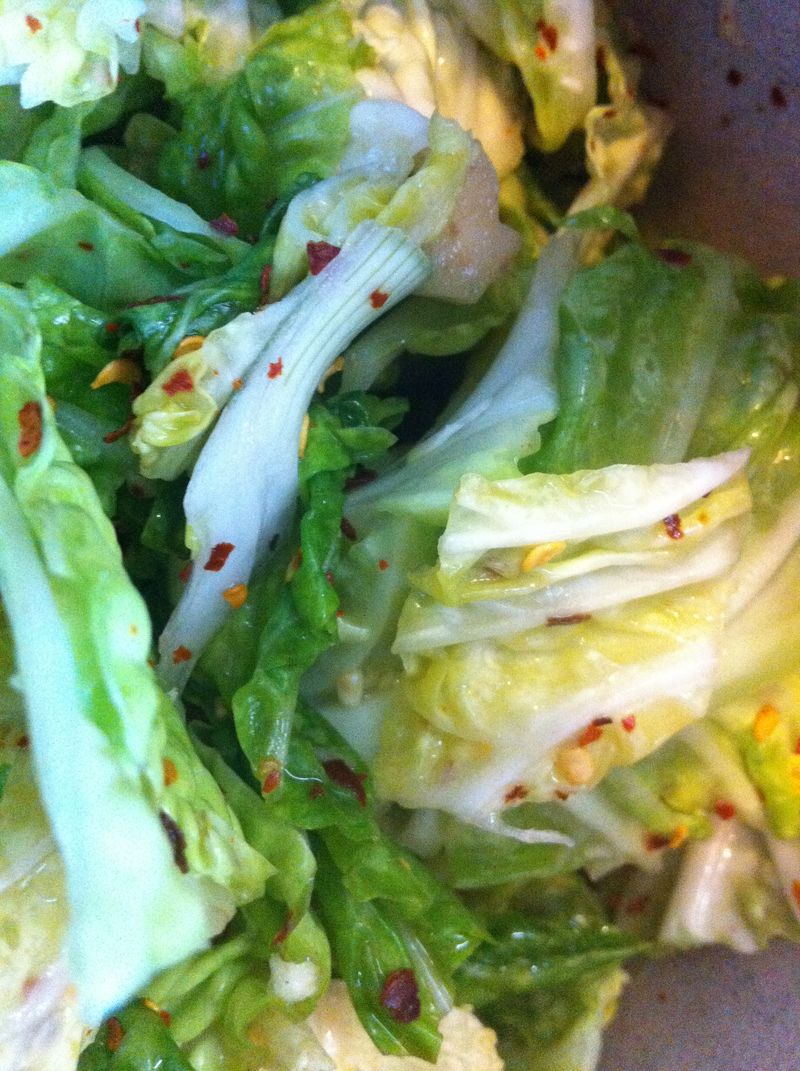 The next step after making peppery, gingery, garlicy, oniony cabbage mixture is to stuff the spicy salty cabbage into a jar with a bag of brine.  This is not as easy as it first appears and can be a little painful if you are doing it with your bare hands due to the pepper and ginger oil. The result it quite pretty though. 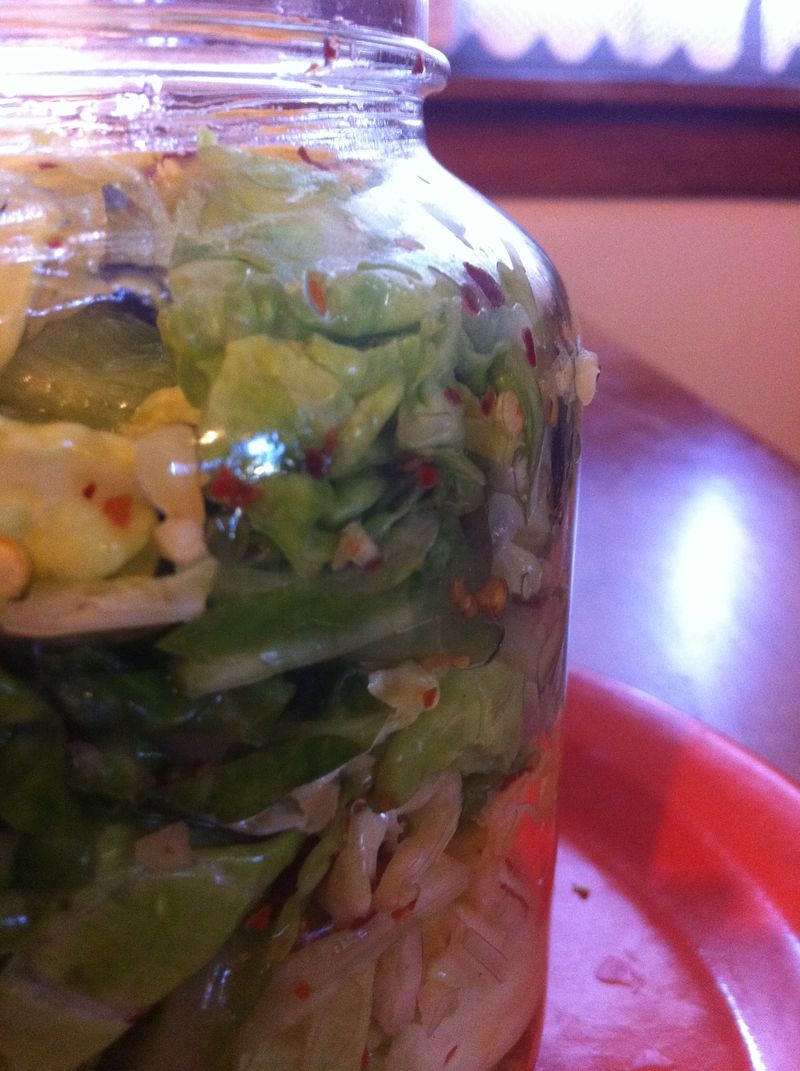 After your cabbage is stuffed in the 2 quart jar with its friendly bag of brine close the jar and let the kimchi sit in a cool place for 3 to 6 days.  Cool = no hotter than 68 degrees F.  My Seattle basement was a perfect location.  7 days later I had kimchi to bring to a good friends birthday party to share and show off my new pickling prowess. 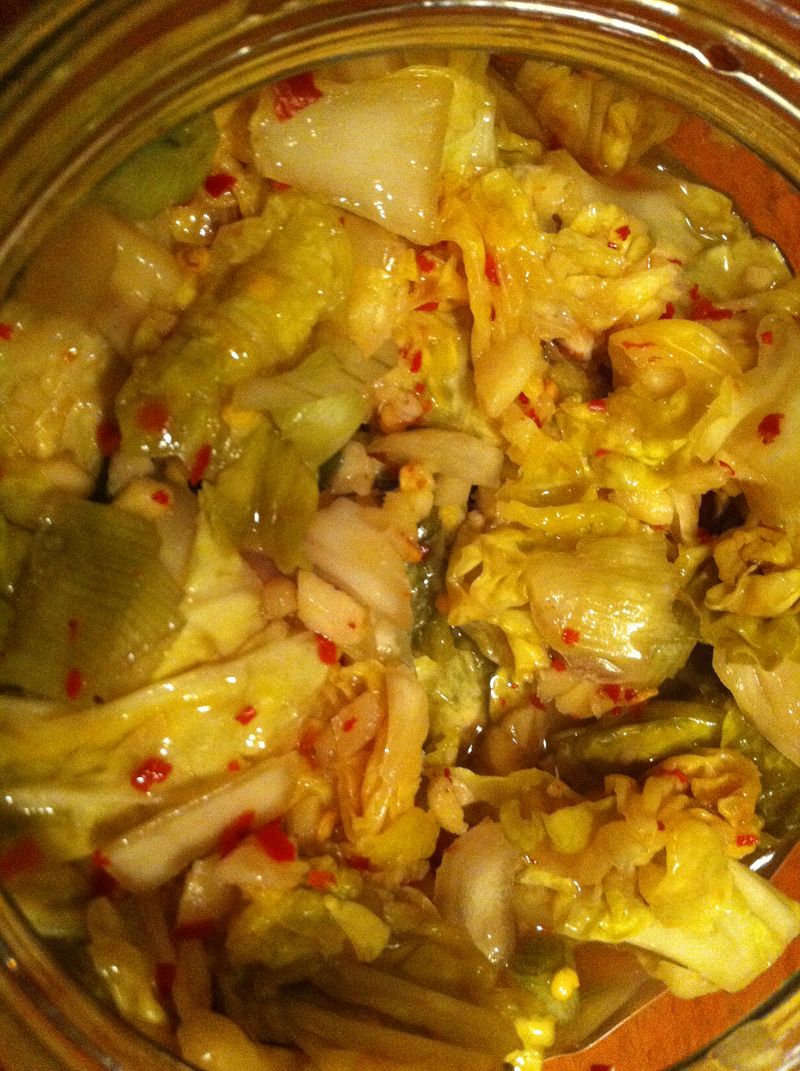 Step 1: Acquire a nonreactive container such as a stoneware crock. Chop your cabbage into 1-inch lengths.

Step 2: In a bowl, place 3 Tbsp of salt into 6 cups of water and stir until it dissolves (to make brine).  Put the cabbage in your crock and pour the brine over the cabbage.  Weight the cabbage with a plate or other handy object and let stand at room temperature for about 12 hours.

Step 3:  The next day – drain the cabbage and save the brine.  Chop your garlic, ginger, and onions.  Mix them with the cabbage and red chili pepper.  Add another teaspoon of salt.

Step 4: Stuff the mixture into a 2 quart jar and cover it with some of the brine until it looks wet.  Then place the rest of the brine in a food grade plastic bag and push the bag into the mouth of the jar.  You will have to press it down on top of the cabbage mixture to make everything fit in the jar.  Seal the jar and place it in a cool place for up to a week.

Step 5: A week later, open the jar, remove the bag of brine and enjoy the garlicly gingery goodness.  It will have a strong odor so don't keep it open for long.

You can store the kimchi in the refrigerator and it will keep for quite a long time (roughly 4 to  6 months) before it sours.