I have the loudest cell phone in all of India and today it rang about 20 times in the most inappropriate places – like tombs and quiet restaurants – quite embarrassing and all for a wrong number. 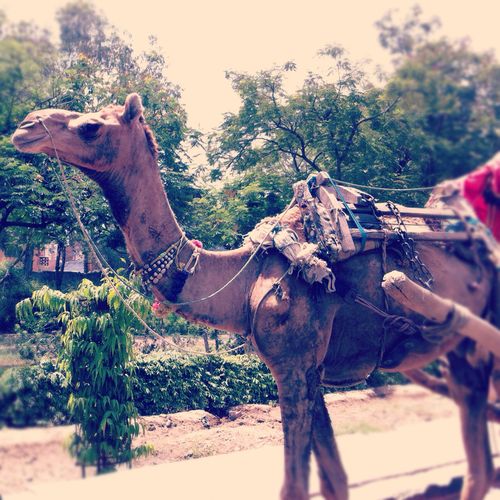 In Agra there is one tourist attraction and 3 other things you can do. Having done Agra Fort yesterday I was left with big taj, baby taj, and staring at the big taj from a rooftop deck. So it would be a day with the Taj Mahal. 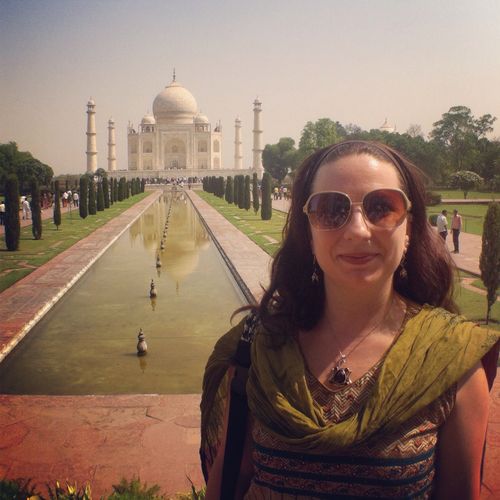 It also started out with the same local guide as yesterday- who turned out to be quite useful at the Taj Mahal, not for his rambling history, but for his photography. He took this picture I have coined "the money shot" on instagram and that in the end, plus the escort, was worth it.

Here is my guide – I had him pose by the map as it seemed appropriate. 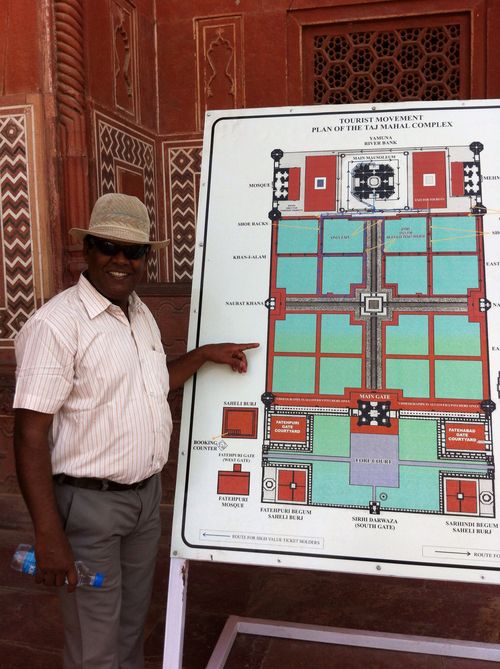 I'm just going to say it. The Taj Mahal is as cool as they say it is. It's a gigantic marble building on a river with ridiculous amounts of craftsmanship splattered all over it that took 22 years to build. 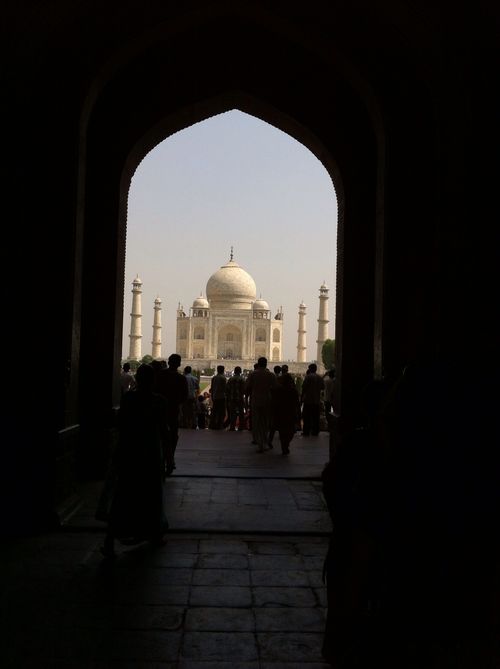 It is also extremely photogenic.

As a child I used to read encyclopedias for fun about distant places and specifically the 7 wonders of the world. When they "redid" the 7 wonders to include things that actually still exist today initially I was a bit miffed. But now taking in one of the "new" wonders I concede that wonders should be things people can wonder at. 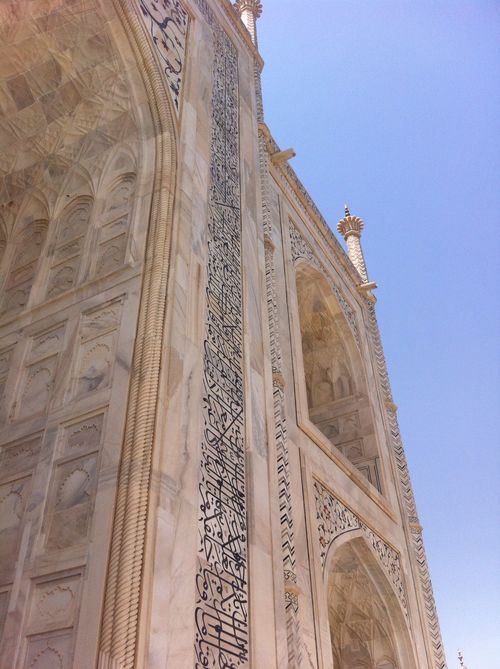 Shah Jahan built the Taj Mahal for his 3rd but favorite wife Mumtaz Muhal. She gave him 14 children and went with him everywhere (including battlefields). His other wives apparently did not do anything- but they still got supporting tombs at each of the Taj gates along with the children's nanny. 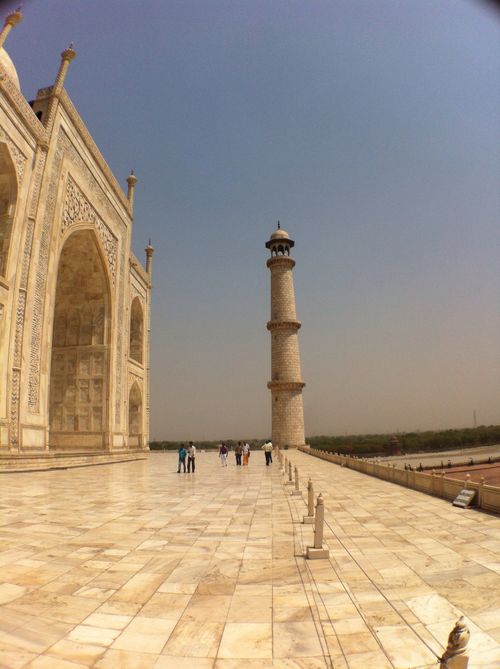 The Taj is also, I think, the largest monument built for a woman. I wonder at this. 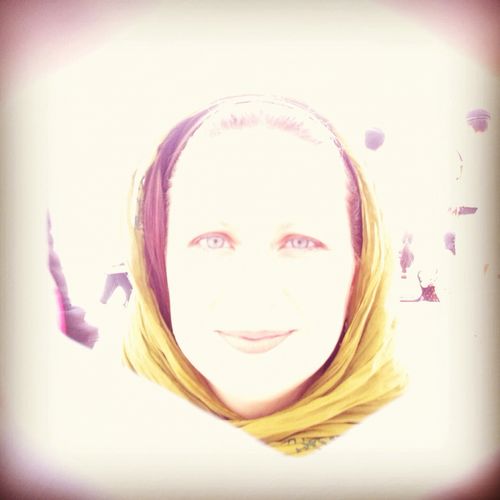 After the impressive stature of the Taj – the baby taj – or its given name Itmad-ud-Daulah, tomb of Mizra Ghiyas Beg, Persian grandfather of Mumtaz Mahal – seems not that much to look at. But in comparison to some of the other tombs I've seen it had very unique design work. 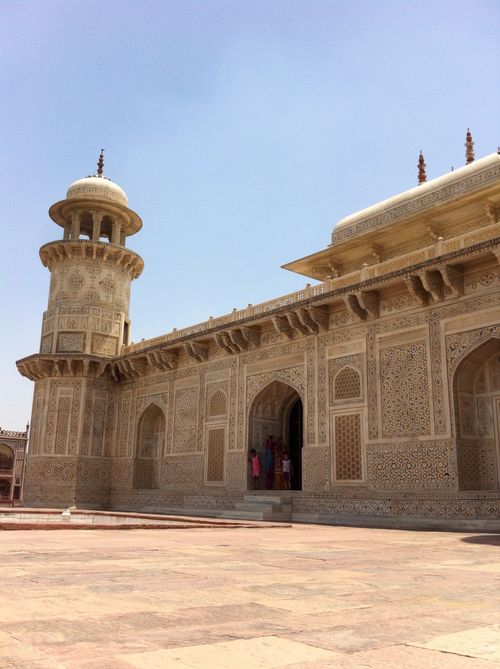 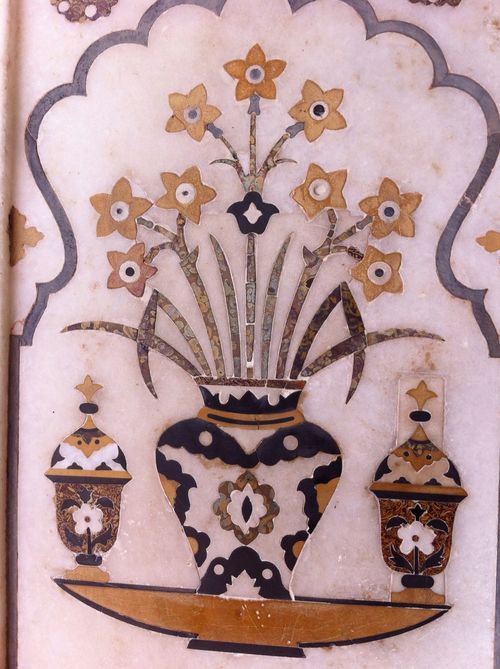 It also had a great view of the Yamuna river where I watched water buffalo and composed poetry. 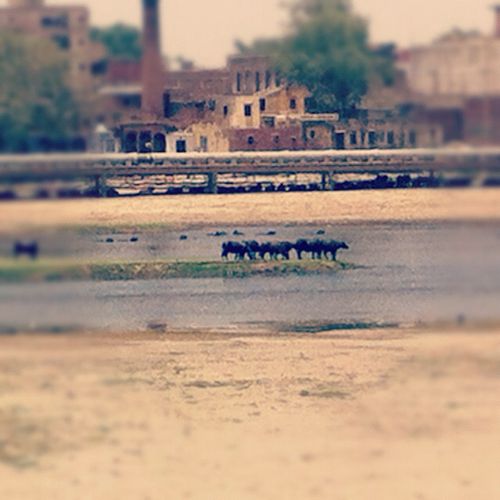 After exhausting my tourist options I insisted Sabir my driver drop me at Kirtani Bazaar- the local wholesale market- as I was on a mission to find another outfit but not pay tourist prices. I left the market successful with three new salwar kameez for under 1500 rupees (under 30 US dollars).

My celebration almost switched directly to panic when my phone could not connect to my driver to have him come pick me up. I put on my practical hat and just started walking to the nearest parking lot looking for the car's elephants. Today they are lucky elephants- I found the car – and promptly had him drop me in Taj Ganj where I got horribly lost and thirsty. 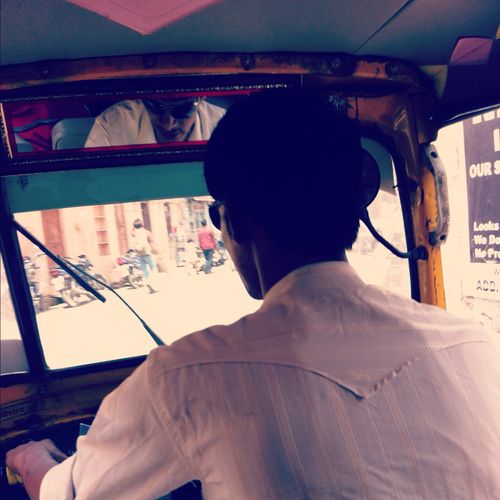 So I had an autorickshaw bring me to the Saniya Palace Hotel to sit on their rooftop restaurant and gaze at the Taj. 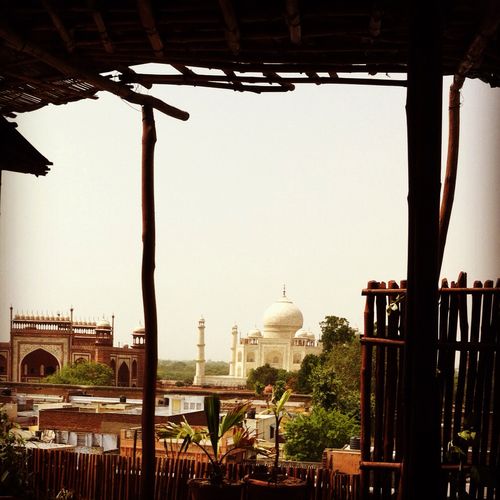 I ordered ginger tea and it was just what I needed for my cold. I also got a little snack – Dal Tadka. Some poetry practice and a beer later I was a happy camper. 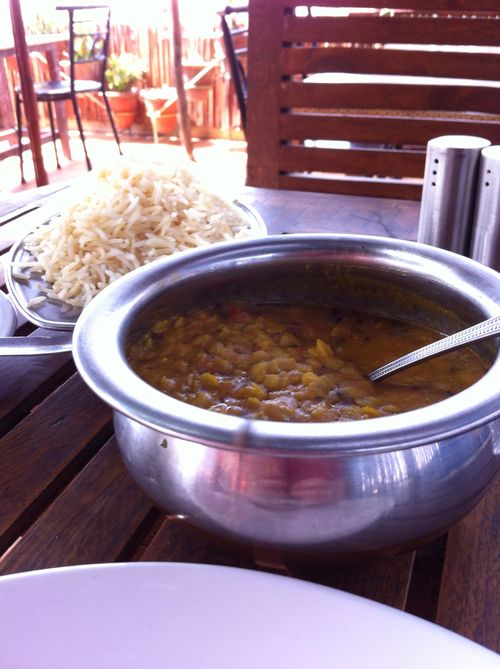 I eventually got home but not by my driver as the rickshaw insisted on taking me somewhere that was not my requested location. I did get him to take me to my homestay – and a little conversation with other travelers and a shower later I was ready for dinner. 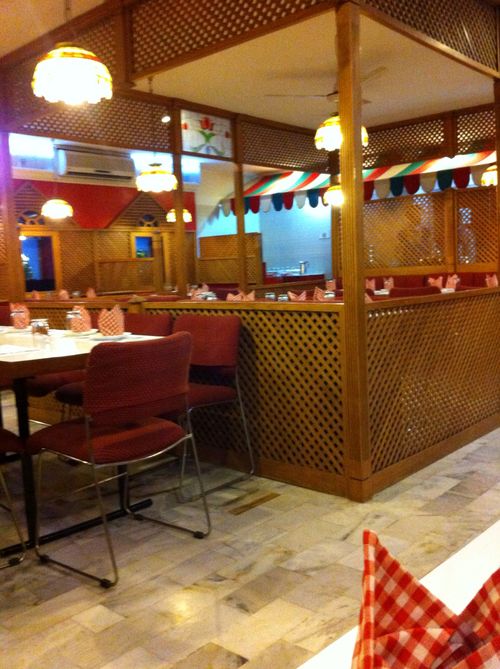 I only ate one round – and have no idea really what I ate – but it was spicy and good. It made me ready for the long drive to Jaipur tomorrow.

1 thought on “Taj Mahal and Dal”