First thing today I attempted to buy a pre-paid phone and was groped in the process – then I found a "grocery store" and purchased bottled water that was not sealed. It was a good start to Dehli day 2 – but at least I was wearing some fashionable hand woven cotton and a head scarf. 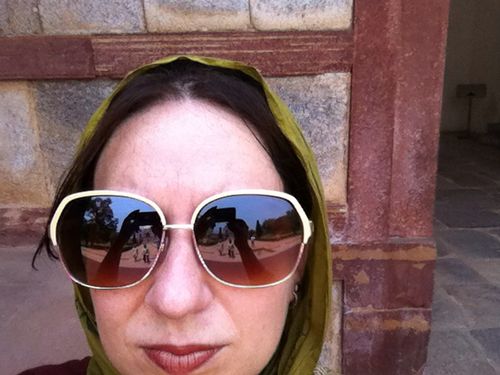 This day was also take two of me versus the travel agent. Apparently one does need to pay in full for commitments to be made here. But after some arguing, crying, and sadly – helpless woman tactics I have reasonable transportation, a trip to Pushkar & Udaipur, and a new friend. This took three more cups of tea and a telephone sim card to accomplish.

I skipped breakfast this morning and ate leftover vegetable biryani backed up with almonds from the flight over. Had I known this would be my only meal until dinner I might have chosen differently – or at least taken the almonds with me – but alas instead of food I got Mughal tombs and Muslim towers. 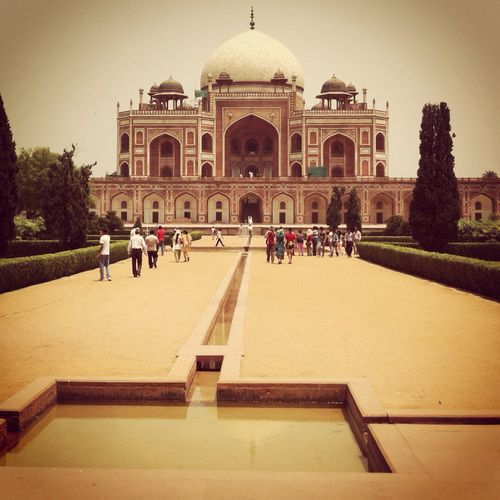 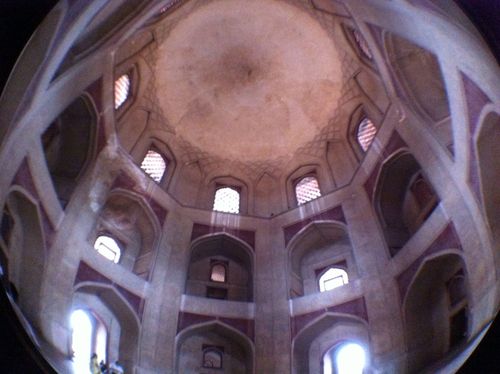 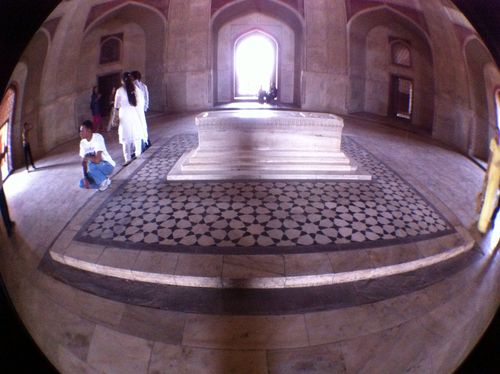 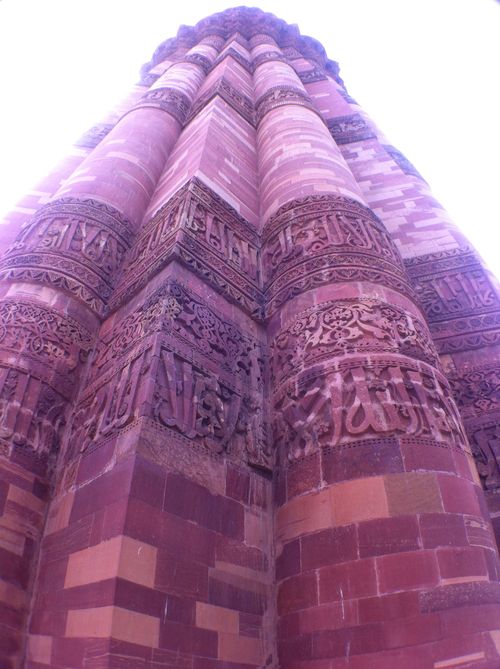 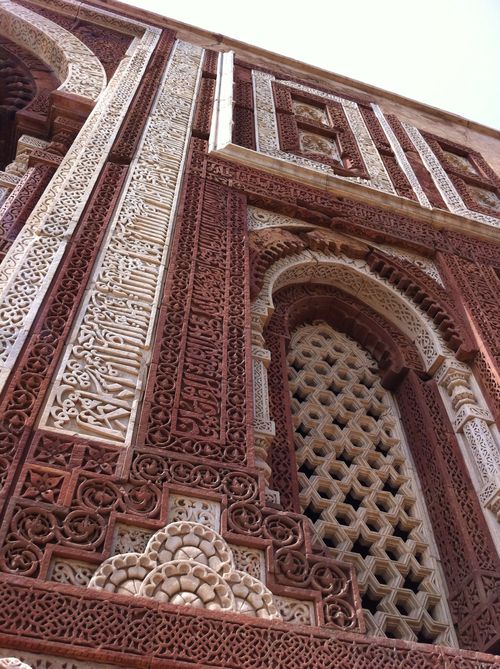 And a trip to the National Museum past some interesting traffic. 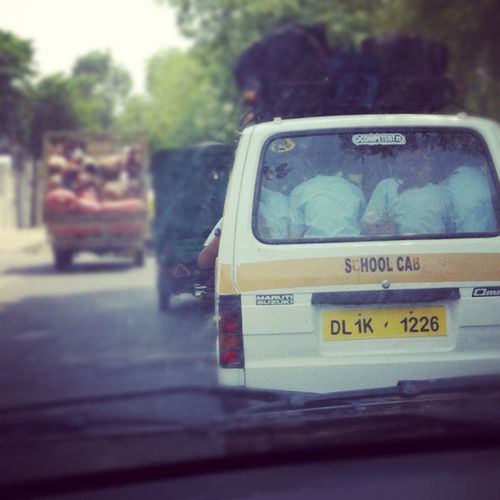 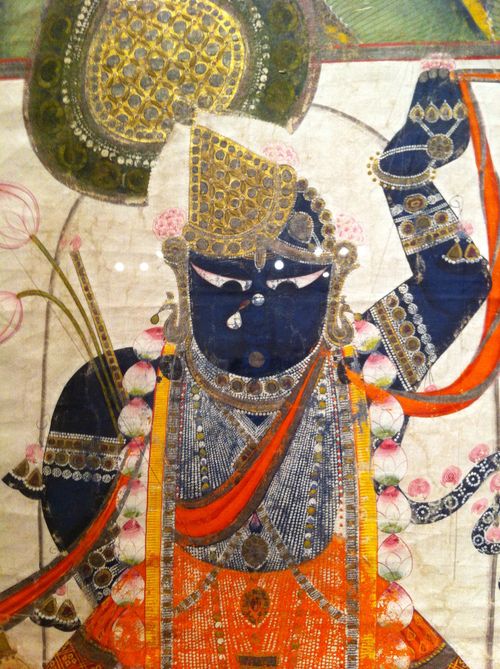 I was starving so most of the National Museum's art was lost on me but I did find a South Park reminiscent Shiva and apparently some "relics" of Buddha a.k.a bones.

While in this gallery I was momentarily transported back in time to Rome and my first encounter with relics. My first time out of the country self wandered into the basement of a church and found wham! the whole skeleton of the patron saint of transportation.

This was far smaller in scale but same concept different culture. 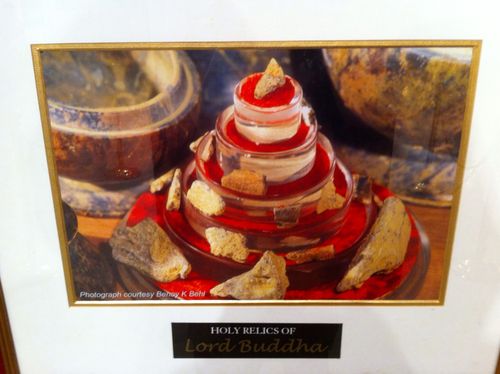 I need to work on being more like this guy as apparently India is a place of chaos, challenge and the unexpected. 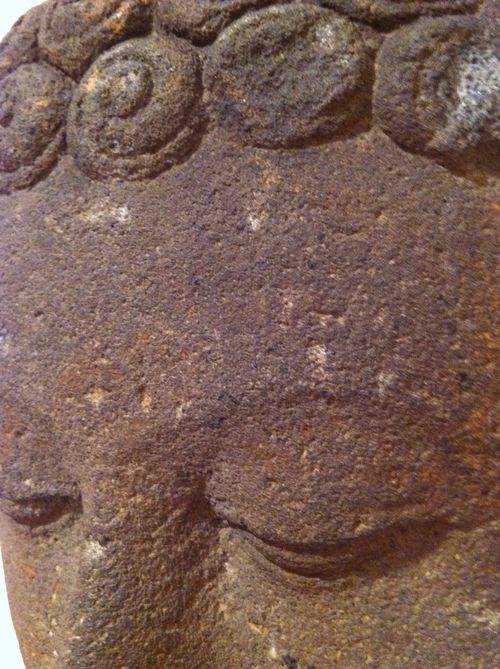 After requesting my driver to take me to Gandhi Smriti first thing in the morning I was finally brought there after everything else. Apparently I taught him about a local national history location as he admitted to researching the location while I was wandering the museum. 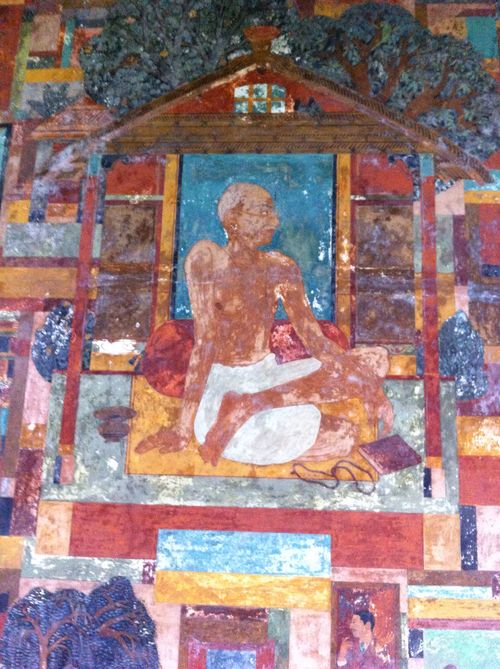 Gandhi Smriti is the location where Mahatma spent the last 144 days of his life and was assassinated. The house he stayed in is a museum and his last steps are preserved in concrete. 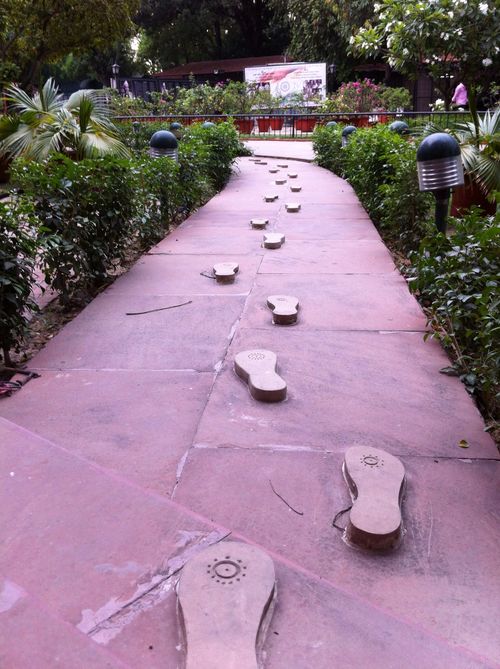 They lead to the location of his assasination on January 30, 1948 where a martyr's column now stands. 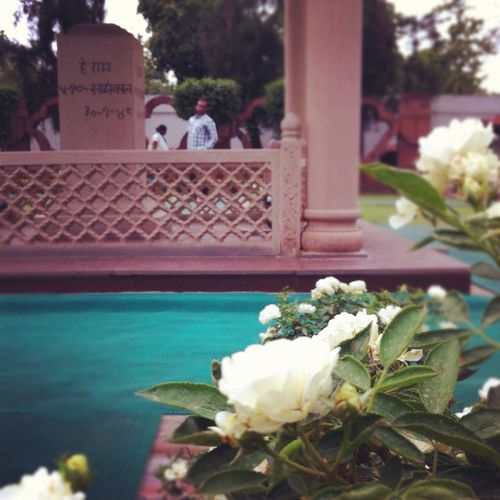 Nearby is Gandhi's prayer space. I kneeled and chanted Nam Myoho Renge Kyo for the sake of peace and humanity in the exact place that he did and was overcome by emotion. 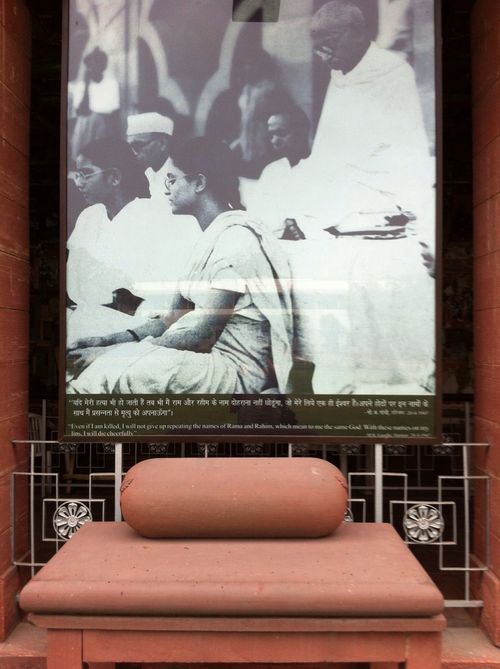 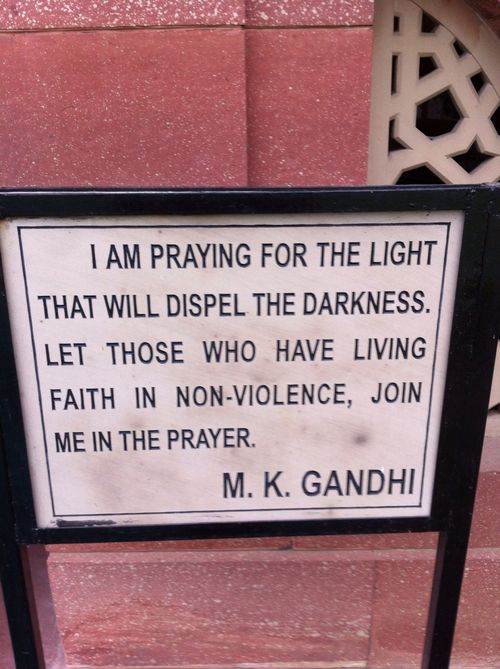 So inspired I forgot I was hungry and instead composed a poem. 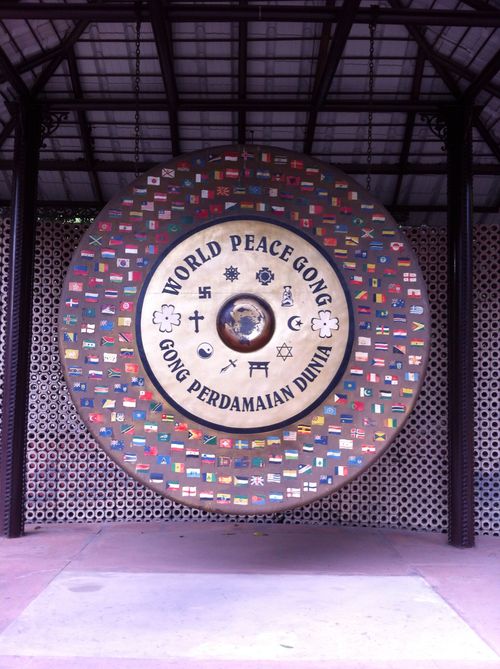 As I exited this monument to a great peace activist I noted it is directly across the street from the National Defense Training Ministry. Oh irony what would we do without you? 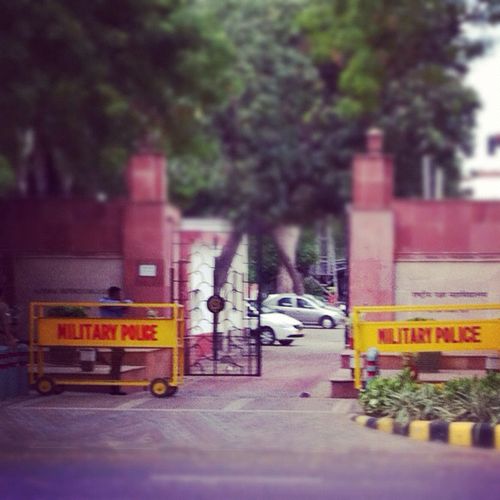 At home I ordered A lot of food – peas masala, butter chicken, chapati, and a Kingfisher to wash it down. 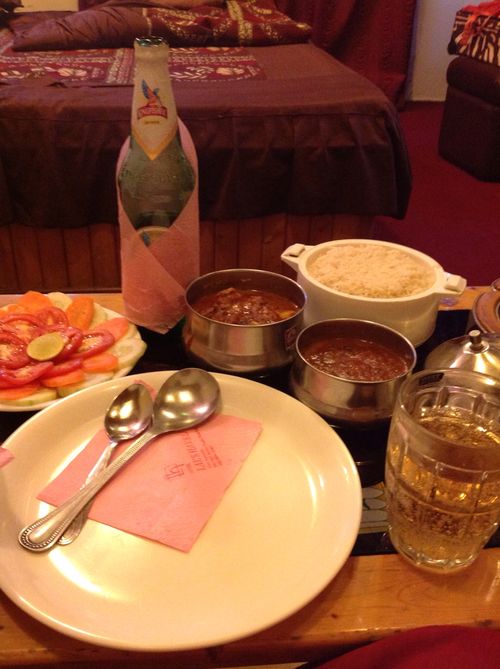 It is as if I never tasted masala or butter chicken before – you could blame it on the total hunger but I think there is something to this fresh spices skillfully blended thing. 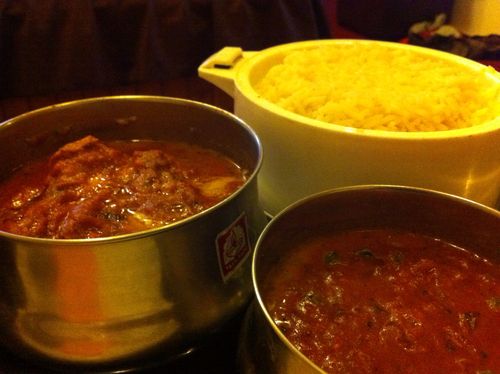 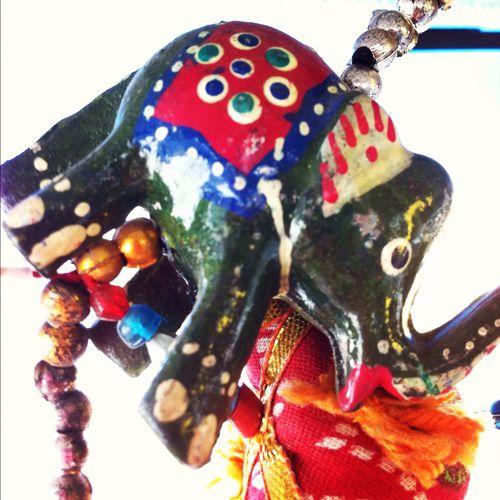 1 thought on “Mughals, Martyrs and Masala”