Bright eyed I jumped out of bed to get ready for my ride to Agra. I then spent an hour trying to get into my orange sari and not so bright eyed anymore – rather frustrated now- I gave up and put on my brown shalwar kameez and ordered breakfast. 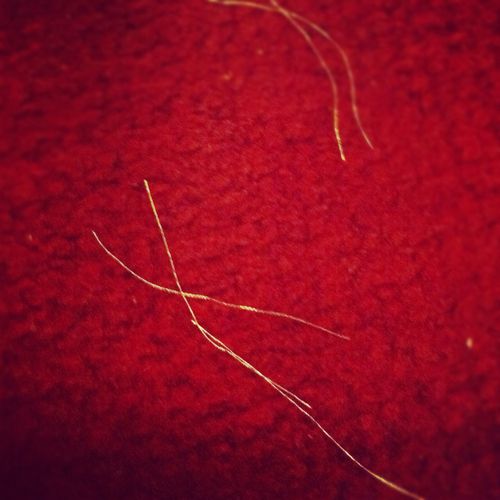 At 9 am sharp I was checked out of Lal's Haveli New Delhi and in the car with Asif (my driver for my Uttar Pradesh and Rajasthan adventures). Two hours in I was dying from coffee and water side effects and then at the border of Uttar Pradesh encountered some monkey business. 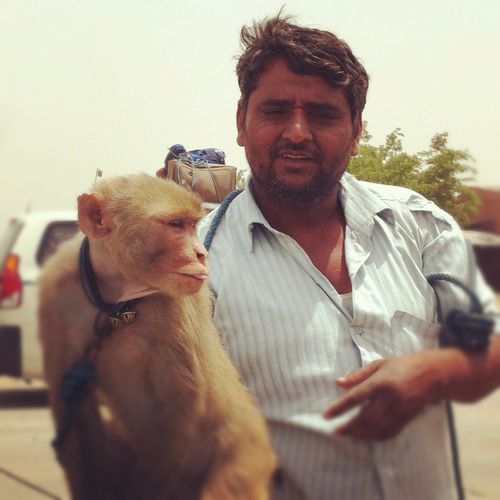 For those that haven't had the pleasure of traveling by car across state borders in India – there is a tax station at each border crossing where random sellers sit prowling for tourists in cars. Monkey man actually had the balls to ask me for 10 US dollars for the photo I took after insisting I take it "no problem." I gave him 10 rupees and said be happy.

The countryside rolled by and my driver took me to a tourist rest stop equipped with western toilets and high prices for mineral water and food. Then I read in my trusty travel guide about Mathura and the birthplace of Krishna. As it was "on the way" a visit to the temple was in order. 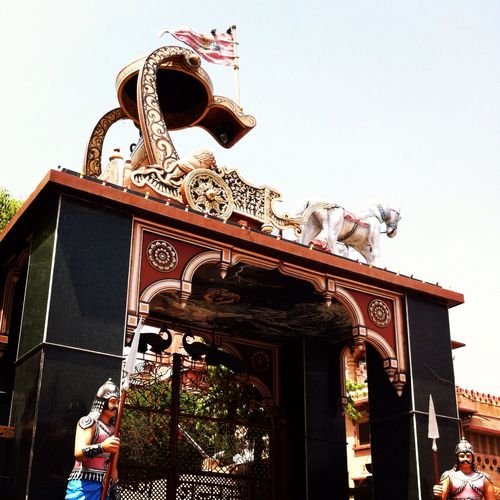 So thing about temples I learned – absolutely no electronic devises are allowed. So my precious iPhone, not so precious Delhi cell phone, and apparently my headphones all had to be checked in the coat room. I was uncomfortable trading my iPhone for a pink slip of paper but I decided this being a religious site – I'd trust in the protective forces of the universe that my precious would return to me.

30 minutes later it did and I had Hare Krishnas singing at the source of their namesake god dancing in my head. A little cow was taking a sun nap in front of the gate. All was well – next stop tourist hot spot Agra.

Just outside of Agra is Mughal Emperor Akbar's tomb. I'm beginning to see a theme in the architecture of these monuments. 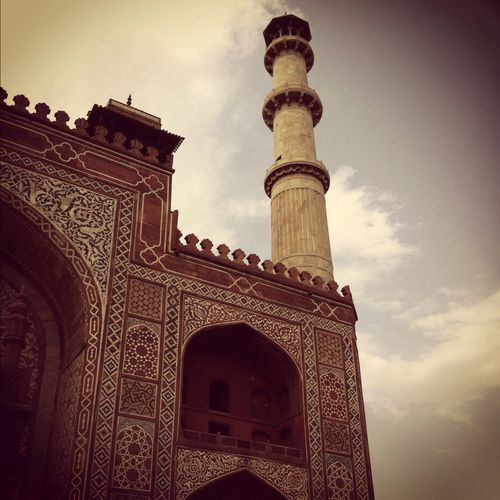 I've also learned to point out obvious things like signs that read " take care of your own shoes" to the man insisting on a 100 rupee tip for watching them.

When we reached Agra I was unpleased to find out a local guide had been arranged for me. This means I get treated to only the best handicraft tours and tourist restaurants – and have a monologue of semi- interesting historical facts following me around when I'm trying to concentrate on arty photos. At least this is what happened today after checking into my hotel and being taken to the Agra Fort. 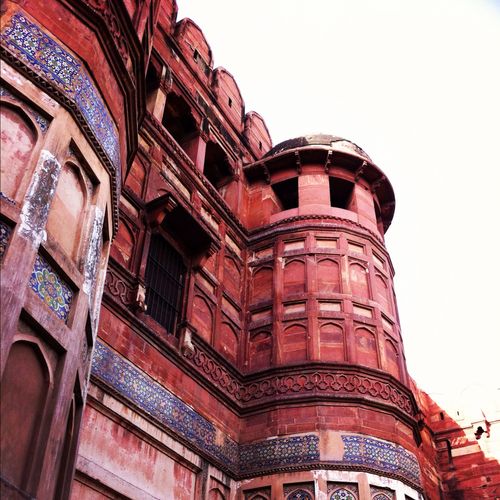 Agra Fort is where Shah Jahan was imprisoned by his son Aurangzeb. He was put in the white tower below to look out everyday upon his completed Taj Mahal. 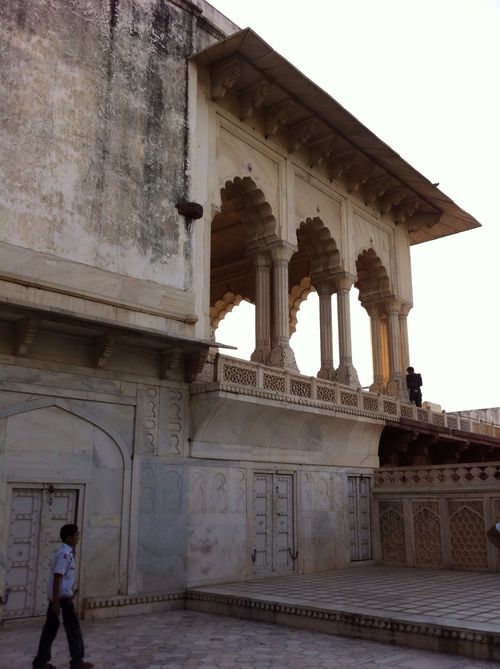 One bonus of a guide is I get a picture like this instead of just my sunglasses and forehead.

And a picture is worth a 1000 rupees right? Or is that words? I don't know anymore – what I do know is that I was dizzy hungry by the time we left the fort so I couldn't put up a fight about being taken to Taj Ganj to eat. Wonderfully enough the restaurant my guide gets paid to take me to had Nasik grown Sauvignon Blanc so I was happy.

The taste of an Indian grown grape was like a combination of pears lime and earth – in that order. If my wine lingo was up to par I think I would say a slightly sweet full bodied pear fruit front, followed by acidic lime flavors and finishing with a thin veil of some type of regal dirt that birthed civilization.

I miss vegetables. I ordered subji seek – as the description was a mixed vegetable skewer cooked in Tandoori oven. In my minds eye I saw crisp blackened whole chunks of vegetable like carrot and green pepper or maybe even eggplant. Instead I got deep-fried potato fritters with yogurt chutney. Tasty but not fiber. 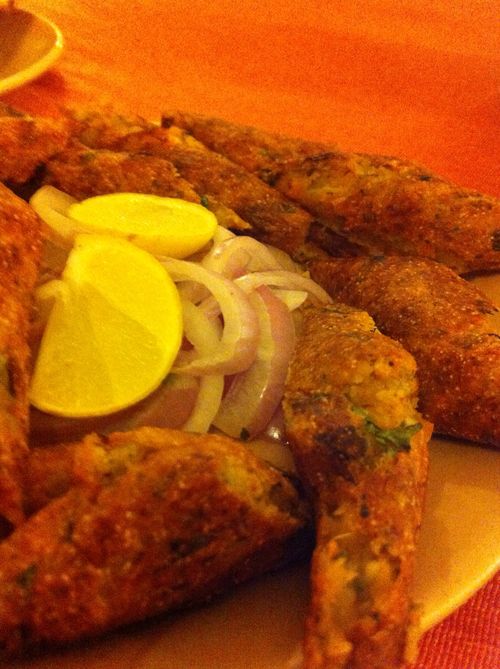 For fun I asked the server what vegetables were actually in the fritters and received the answer "potato and mixed vegetables." Hmmm yes very clarifying.

At last it was time for shower, bed and vitamins to ward off what feels like an oncoming illness probably from 20 hours of recirculated air and too much air conditioning. 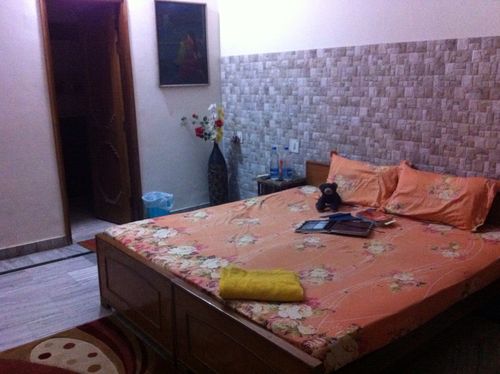 Tomorrow the Taj Mahal and many more tourist traps await.