Saturday was one of those days where things take longer than they should and when they happen they happen sideways. It could have been the full moon. I might just be that I spent half the day in line for things and the other half of the day looking for things. All the things looked for and waited for appeared however, just not exactly in the form or way expected. 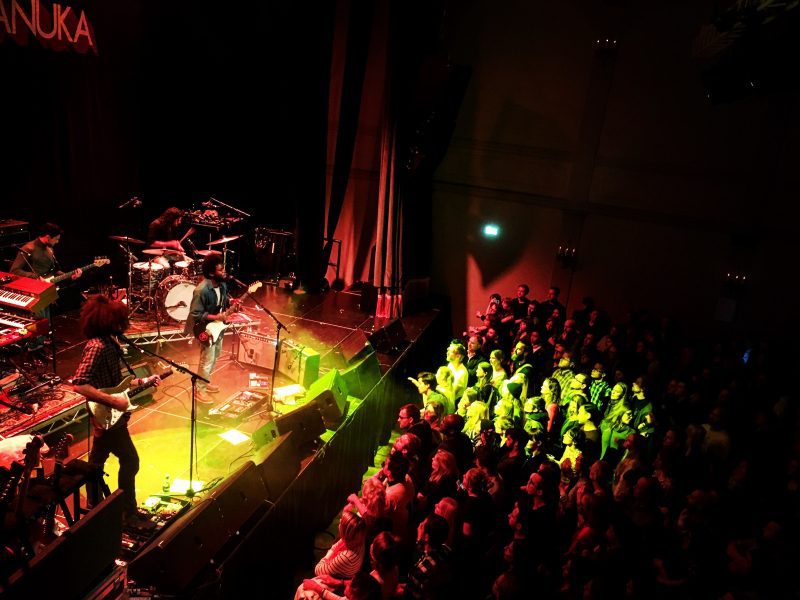 I travel alone quite frequently, so much so that when I do travel with friends I have to reset my expectations and pace of consuming experience. My friend dropped her phone in the toilet on Friday, she handled it quite well until it didn't turn back on on Saturday morning and as a result she wanted to shuffle about in an exercise of futility looking for some form of replacement. This is understandable – but aggravating when you are me, waiting for friend to reach the point of realization that there is absolutely nothing that can be done about it and move on. This took until about exactly 2:45 pm and a lot of walking about. The timing was good because I had reached the point of turning to Scotch to dull my impatience. 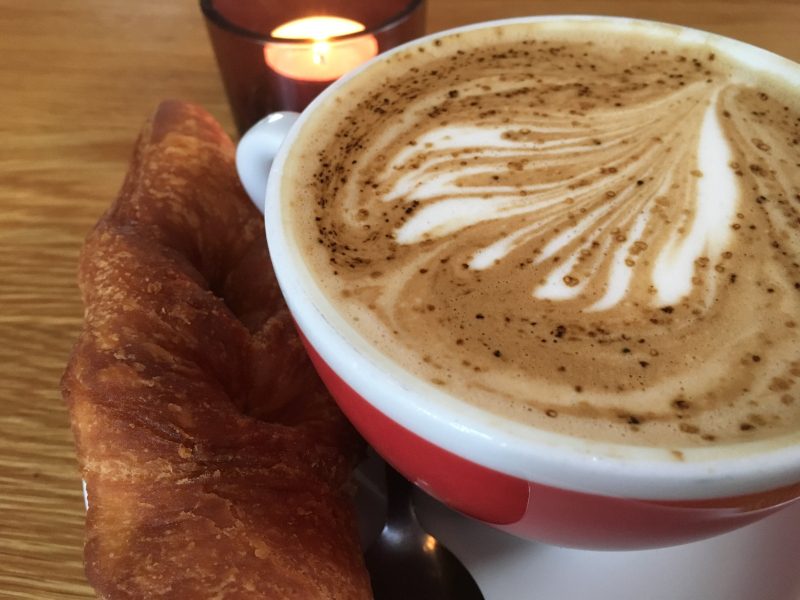 I also finally just rebelled and insisted that we stop walking in the cold and go inside and watch an off-venue performance.  As a result we found ourselves in front of a large reggae band from New York squeezed onto a tiny little stage in a venue above The Chuck Norris Grill called Dillon. 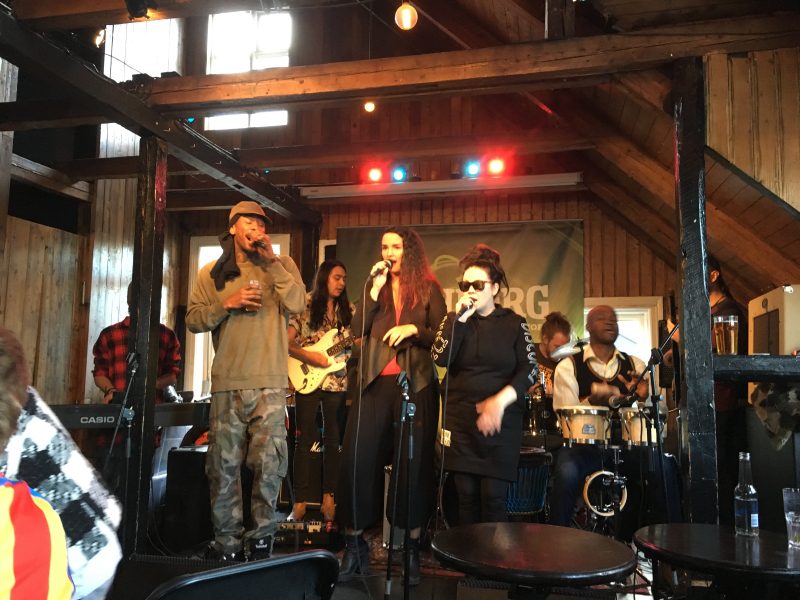 The reggae band is called Lefty Hook and the Right Things – its singer was from New York City, he didn't actually say where his band was from, but it looked like from all over the world.  They were the most positive vibes reggae band ever with no reference to ganja, rasta this or that, or any other religion or drug culture. It was all positivity all the time – just what the moment needed. 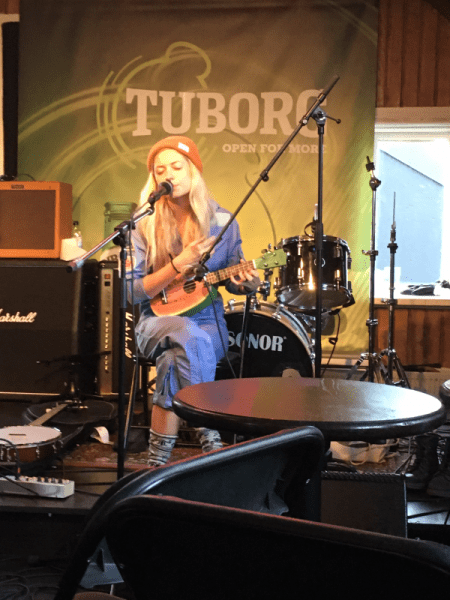 They were followed by this adorable yukelele playing blonde from Stockholm. Between songs and instrument changes she told stories about her friends (who were sadly, really flakey) and living in homes with hippies and too many dogs. Her songs were mostly sad, but quite pretty. We had to leave her set early however, so we could walk to Harpa and get in line for Mumford and Sons tickets. 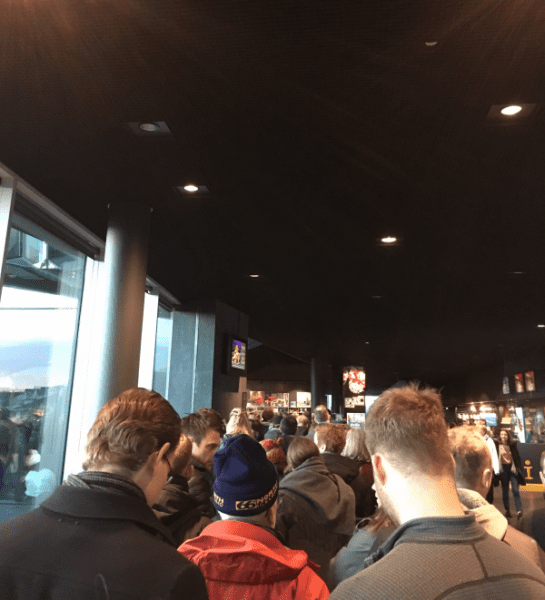 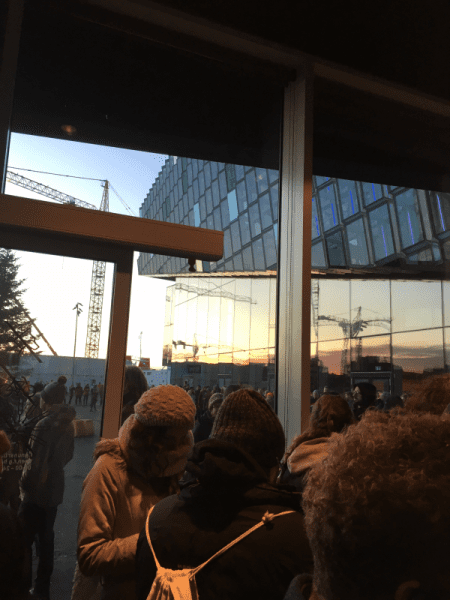 We got there at a reasonable time for what we believed to be the size of the venue and ticket availability. The size of the line made us question our logic a little bit as there were so many people already in the queue.  We started talking with the people around us and making friends to enjoy our line experience. We got some local advise about wine and learned about a mom and her sons birthday adventure. 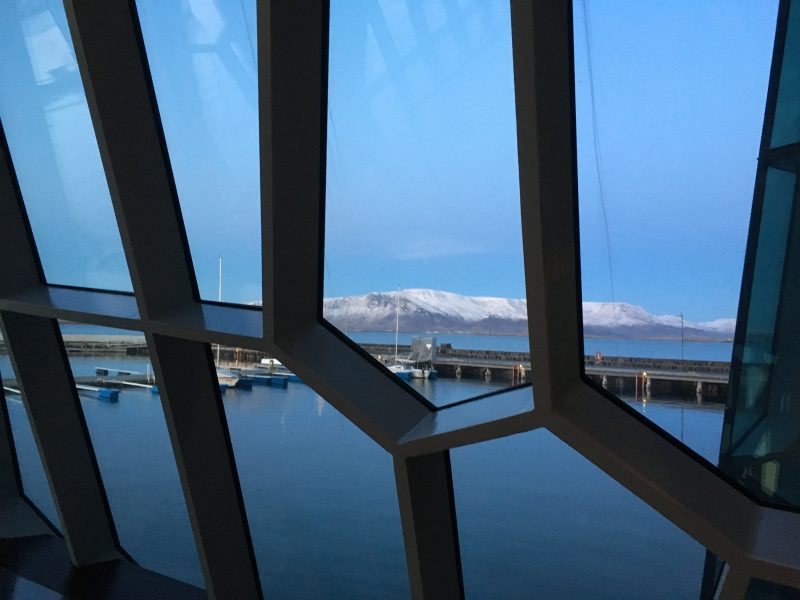 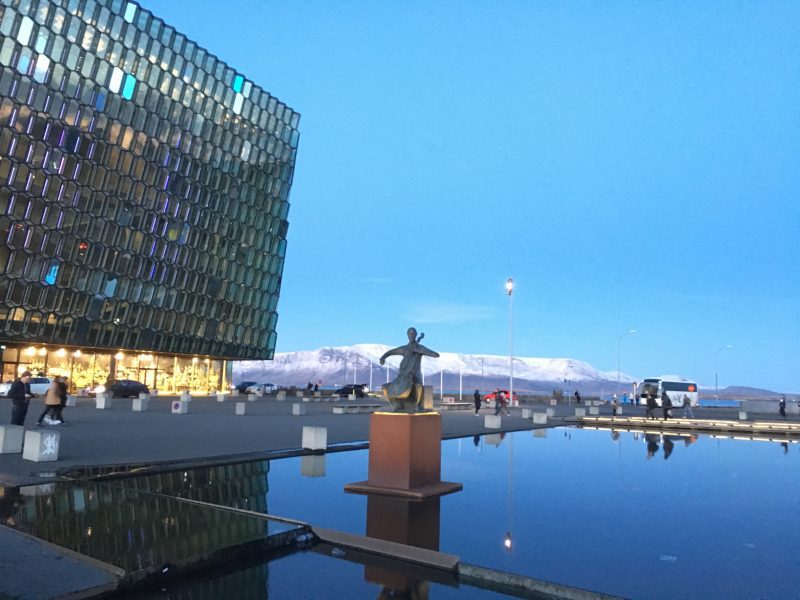 About an hour and a half later we had two tickets to the Sunday night concert and were on our way to follow-up on the local's advise regarding the government wine store. 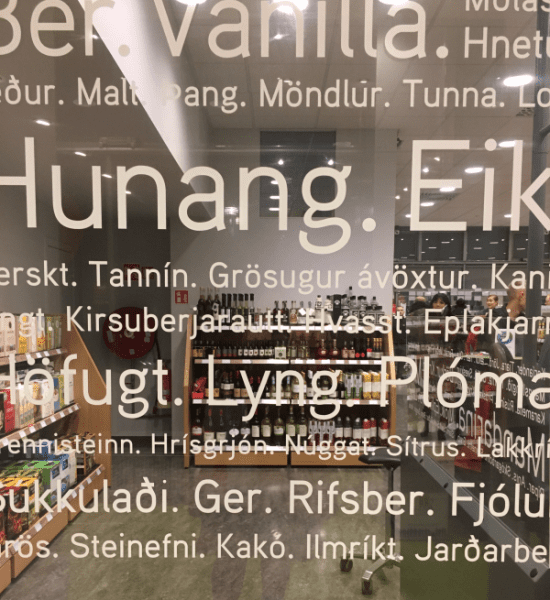 On our way to the wine store, with one wrong turn under our belt we stopped in a bookstore to ask directions and there we found a replacement camera for my friend. So all was right in the world and it was time for dinner. 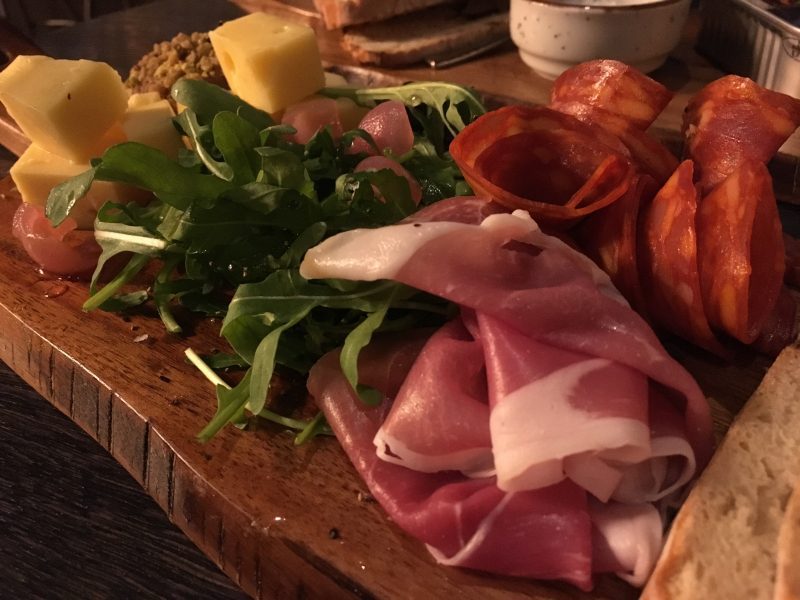 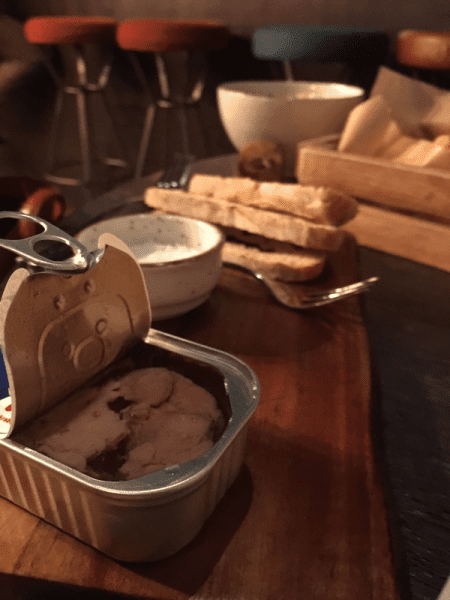 We went with a place that had the equivalent of Icelandic Tapas.  A bunch of small but regionally interesting plates. Above you see a charcuterie plate featuring icelandic cheese, meats and pate and a tin of smoked cod liver.  Smoked cod liver is apparently the foie gras of Iceland – it smells a bit like cat food but it tastes quite nice. Smokey, not unpleasantly fishy and lovely soft oily (but not too oily) texture that spreads easily on a little piece of toast. It was extremely filling and hearty – which was perfect because even though I didn't know it yet I had a long night ahead of me.

My friend was tired when we returned from dinner but it was Saturday Night of the music festival so I had to go out to catch some of the best music of the week. I headed for the Hard Rock Cafe to catch an Icelandic synth/80's influenced rock group. 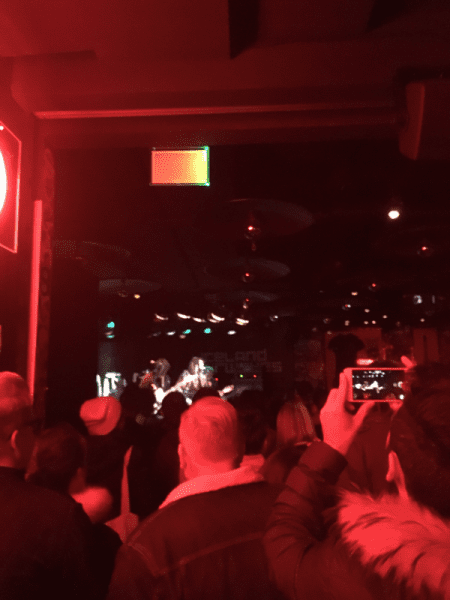 I made it in just before things started reaching capacity at multiple venues including the one I chose. As I hate crowds, and it really inhibits my ability to see, I decided I had to remedy my situation as soon as possible but still catch the music.  As soon as Rythmatik completed their set I was on the prowl of the tables near the walls to find a place for little ole' me. There just happened to be a group of tall blonde and beautiful Icelandic ladies at the corner table struggling to take a selfie of the 4 of them. I seized the moment and offered to take their picture.  They gladly accepted.  I took four or five stunning photos of them and then asked nicely if the other side of their table was occupied – they said "By you! we were just waiting for the right person!" 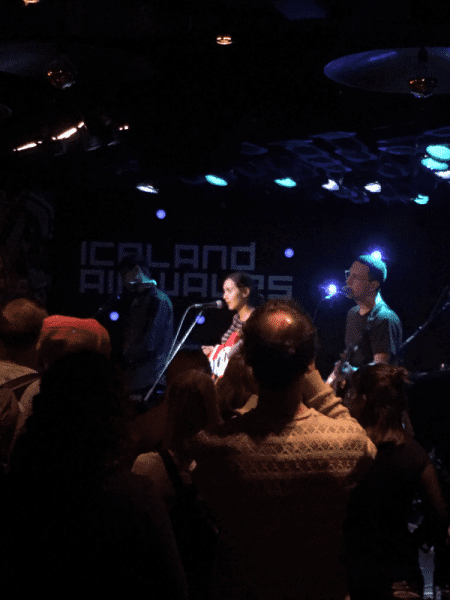 Soon I was sitting on top of the back of the booth with the ladies with a phenomenal view up and over the crowd. "What's your name?" asked Runa (I'm sure this spelling is wrong but it is what her name sounded like in latin alphabet). "Angel." I said. And in stereo they all said "ooooo! oh so nice!  Annnnngell! Angel! We love Angel!" giggle, giggle, giggle.  "You can thank my mother." I told them. They laughed some more then attempted to teach me how to say my name in Icelandic. They made me repeat it and then laughed good-natured at my failure to get the "thqu" sound where the "L" would be in English. Then the next band started and they started to bring me gin and tonics with cucumber and black pepper in them. It is actually a very tasty beverage, a bit sweet though so I kept watering mine down with the club soda in my water bottle.

Then the selfies started.  "I want a selfie with Angel! No, I get a selfie with Angel." I am in so many of their photos it is quite hilarious. I should have had them take one with my camera because I have nothing but the memory of their laughter, and camera flashes in my face. "We love you Angel! Come with us to the next venue, my sister is in line."  I said "The venue Gamla Bio is very full according to the festival app – I think there is a long line." "Yes, yes, but my sister is in line so we will be ok. Please come with us."  I knew it might be an exercise in futility but I couldn't resist their request and choose to be alone in this big festival again. I really liked being adopted into their little group for a Saturday night at Iceland Airwaves. Let the revelry begin.

Or well, let the waiting in a huge long line begin. The line at Gamla Bio stretched for more than two blocks and was at least 4 people across. Hillja's sister was near the front of this massive line of humanity, but when we walked up the death stares were so apparent there was no way were going to integrate unnoticed. So we walked to the back of the line. "Let us try the line!" my new friends said cheerfully. "Angel will you wait with us? Where are you staying? Will you go home?"  I decided to stick it out with them. I could walk across town alone to possibly wait in another line alone again to see a band I wasn't sure I'd like or I could just stay put and continue being part of a fun group. "No, I'll stay with you guys."  I said.  "Oh good!  What would you like a beer or another gin and tonic? Runa will get one for you." "We can drink outside?" I asked.  "Yes of course, no one cares." It is then that I noticed every single person in line with a couple minor exceptions was holding an adult beverage. They were so well-behaved for a large group of intoxicated persons that I hadn't even noticed.

We stayed in the line for over an hour, we grew in size as two of my friends husbands joined us and another's sister. We lost the only brunette and then there was talk about her being pregnant.  Frequently, someone would go across the street to get more drinks or to use the bathroom, we started talking with people in front and in back of us and found people from all over the world with different experiences. The girl from New Jersey swore she just saw Bjork (there is always one). Then there were the Icelandic folk songs – Runa and her brother sang one for me about a Raven calling in his friends to eat an animal carcus. It was beautiful, and sparked a whole conversation about Ravens, Odin, Runes, and world religion. Eventually we made it into the venue just as Michael Kiwanuka was starting his set. He was an amazing and soulful performer. It was an amazing performance and many more selfies were taken. 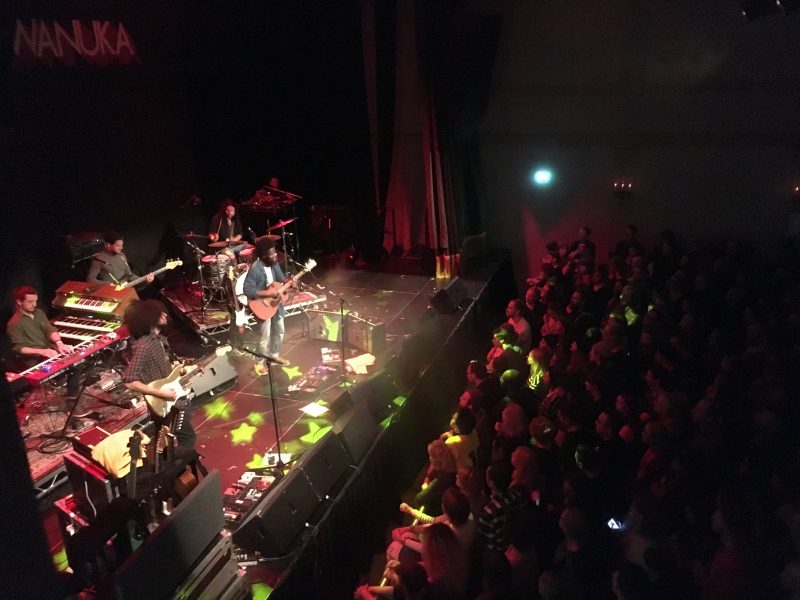 It was totally worth the wait, and half the wait was the fun of being social and getting to know about the lives of people who were strangers just moments before. At the end of the night we all hugged and I asked if they would tag me in a few photos on the Facebook, "Just search Angel in Seattle!" I said. They laughed and said they would and I turned and hurried home in the cold night alone again but happy to have had the experience.