"It is going to be a proper storm today." Said the lady behind the counter stone faced in the wooden trinket shop as we stepped in from the gale force wind and rain out on the sidewalk. It was raining, snowing, slushing, blowing and generally a day of icky weather not even close to pleasant or proper to walk around in. Happy storming Sunday of Iceland Airwaves – if you were leaving early your flight is cancelled. For real, they really cancelled all the flights. 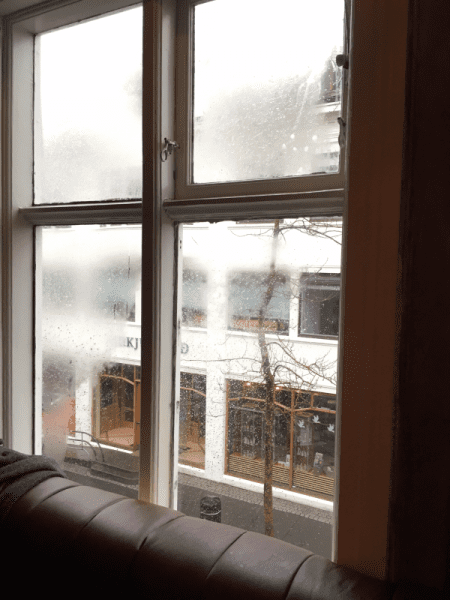 After stumbling around in the semi-light wind and rain for less than an hour down one street of mostly not open art shops we decided to stop being tourists and just sit our butts down in a bar and listen to some of the last off-venue shows of the festival. 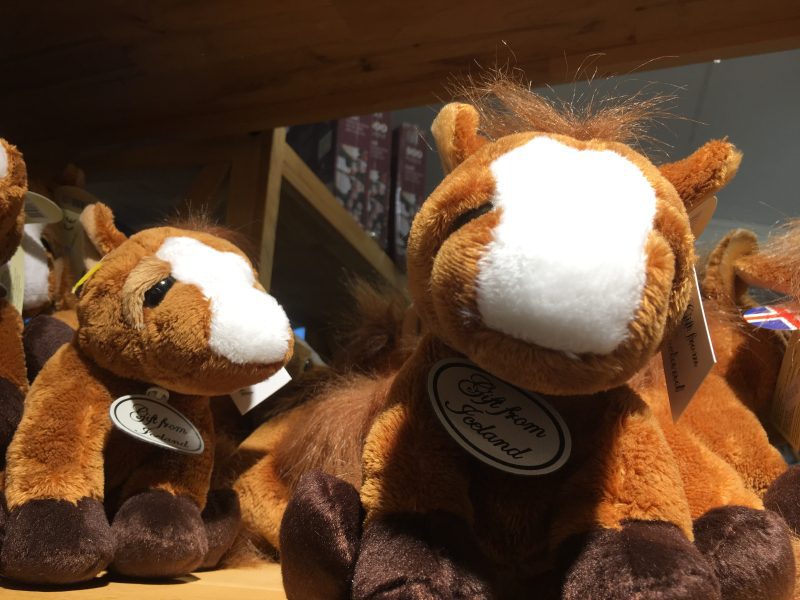 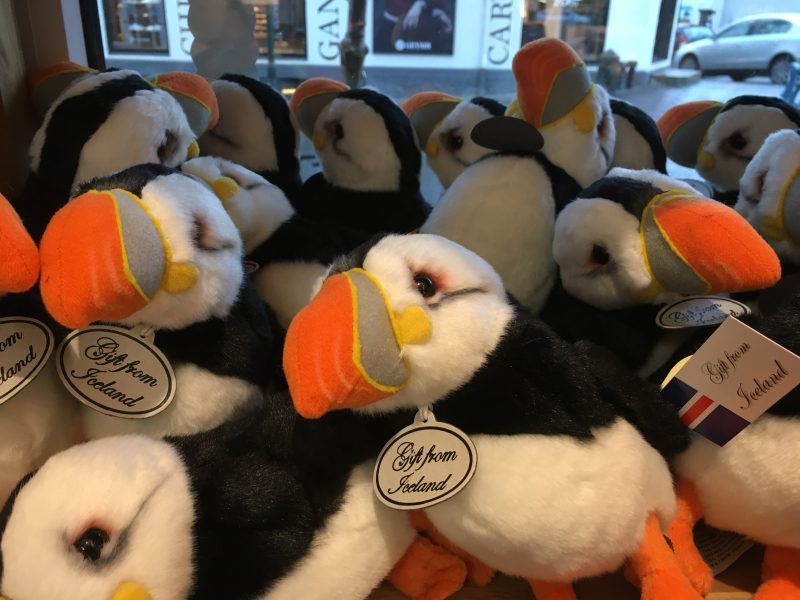 We were semi-successful at this endeavor. We managed to meet a man from Tacoma and see a band from Bellingham, Washington. I also learned that Icelandic whisky is disgusting – expensive lesson, but well learned. 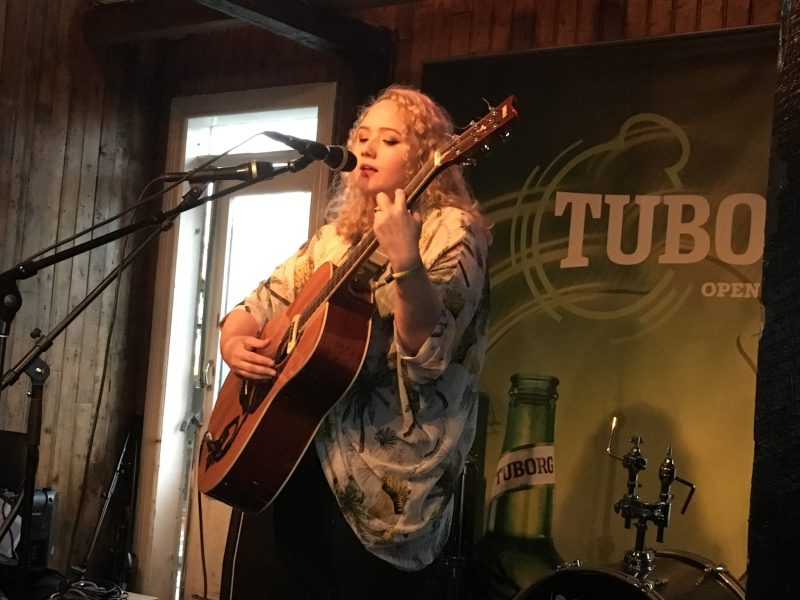 The day started out great – we slept through hotel breakfast because it is not that good and went out to get brunch. 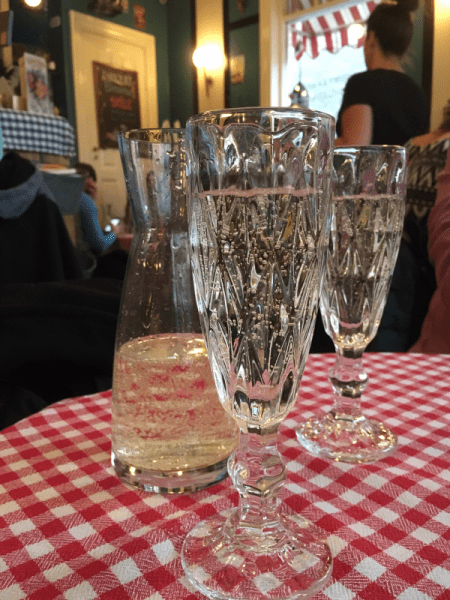 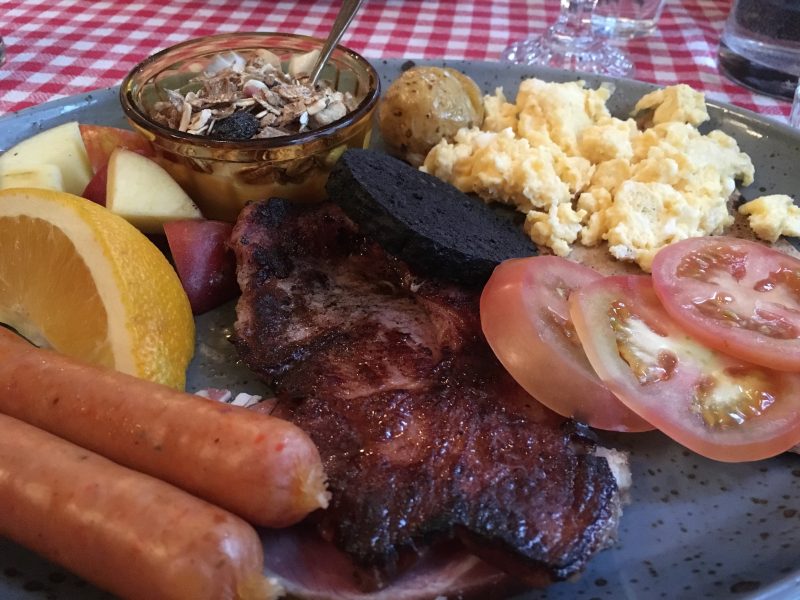 Brunch was filling and tasty and the day was cold and stormy. There were officially no photo opportunities before dark because it was so wet outside I was afraid to wreck my cell phone in the explosive downpour. As it was the last day of the music festival it was also a pretty low key day as far as music happenings were concerned so we really had to just make due with sitting still for some time in our tiny hotel room and whatever bar or restaurant we could run to. 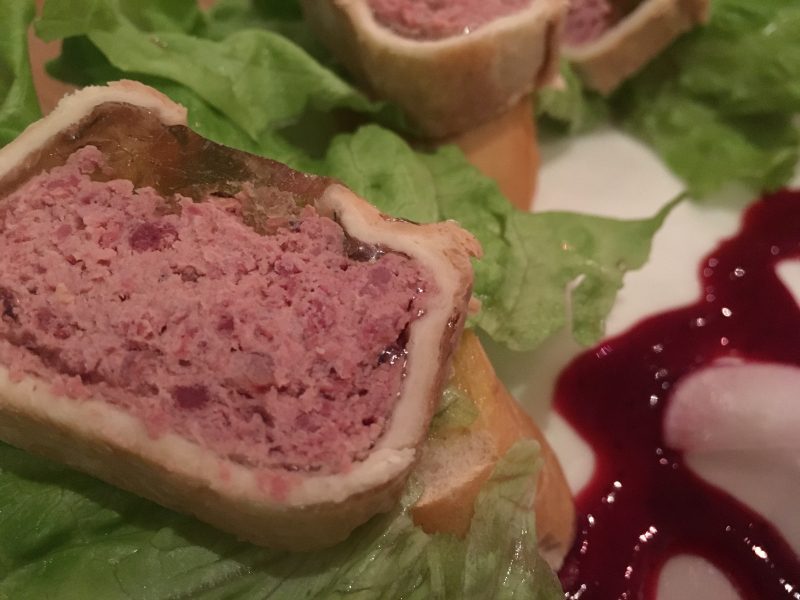 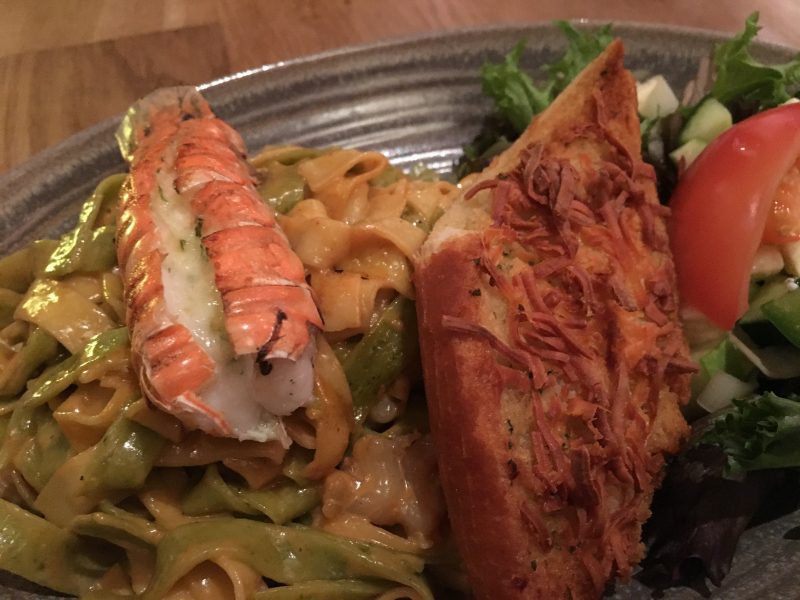 We decided to have dinner at our hotel's restaurant so it would be easy to dress and call a cab to get to the final concert at the sports stadium Valshollin to see Mumford & Sons.

We split a reindeer pate plate then both ordered the lobster (aka langoustine) pasta. Both were phenomenal, fresh and tasty. As we ate the door to the restaurant kept being blown open by the winds outside and other persons who didn't quite close the door all the way. We became the welcoming committee that just kept repeating "You have to give the door a good shove, or else it won't close."

Then it was off to the big concert at the sports center. 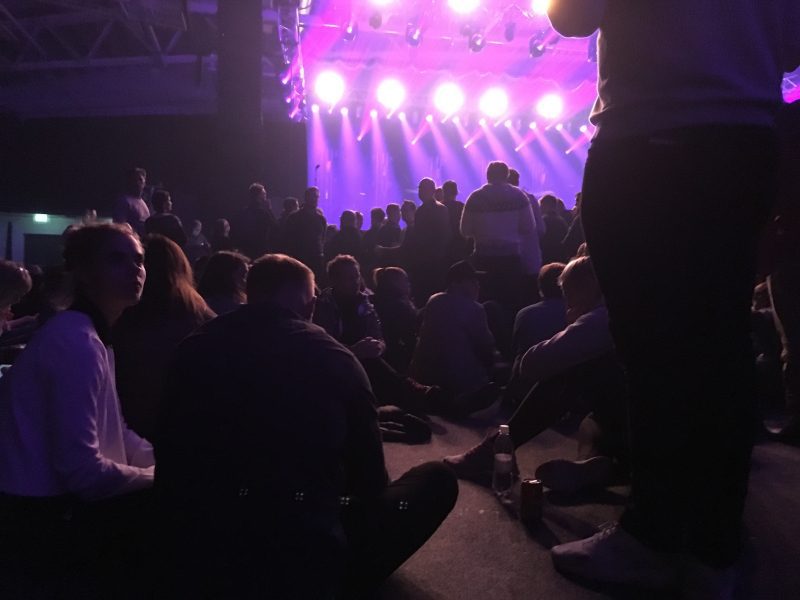 Where Icelandic people sit down on the nice carpet to wait for the next band. So weird. One, the floor was clean enough to sit on and two, everyone was so polite, there was no one vying for special places on the concert floor. 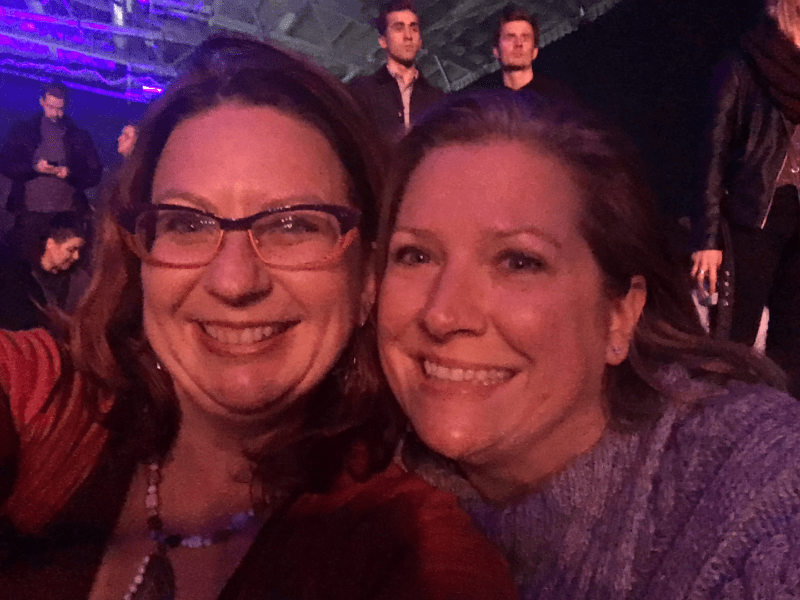 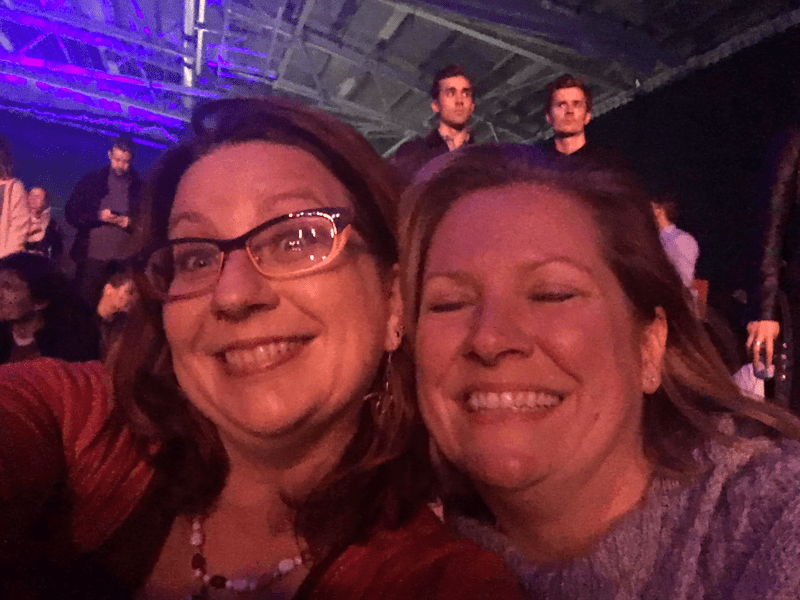 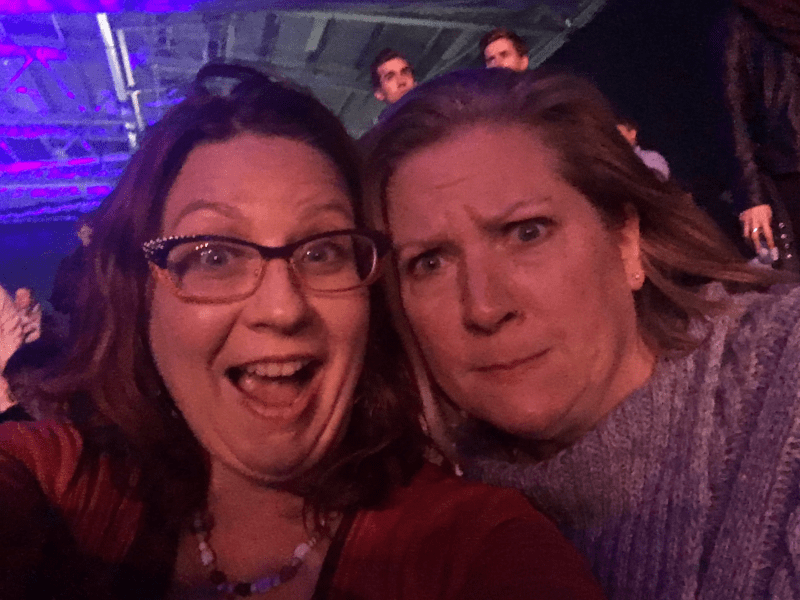 We took a series of selfies as we waited for the fun to start. 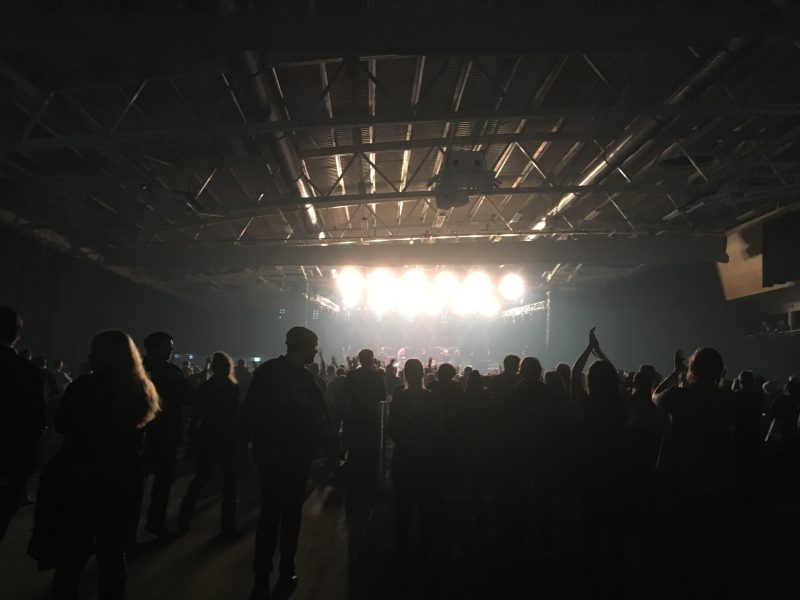 Then the headliners Mumford & Sons started and we were literally blinded by the light. For some reason they had the brightest lights ever shining out from behind them so much that you couldn't see the band at all. They sounded awesome however, but we tried multiple angles and other attempts to get at least a mediocre photo and well, it didn't pan out. 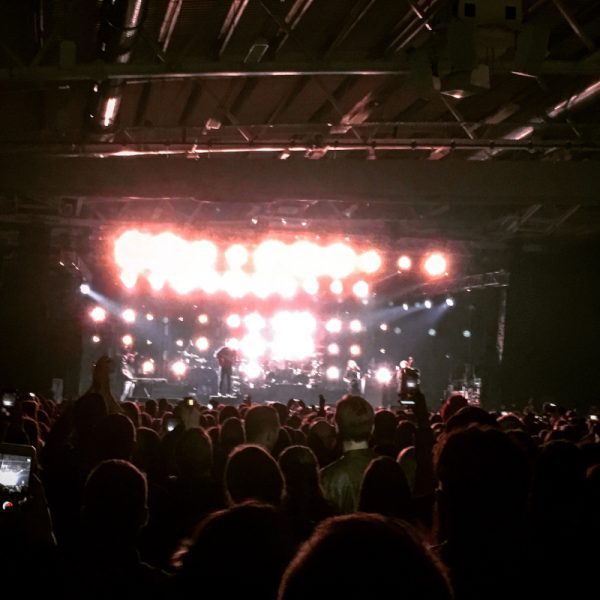 About 10 minutes before the end of the concert we made a run for it because we had a cab scheduled, coats to retrieve and a crowd of over 2000 persons to beat out the door. When our driver came up to the door it was a little hairy as a couple beautiful ladies walked up to our cab and were like "There is a queue here!" to us. To which we said – "Well, we called this cab special for us." Complete death stare. It was OK because our driver said sweetly from inside the car, "I'm here to pick-up Angel." Darn skippy. We drove off into the non-existent sunset back to our hotel.  We win Iceland Airwaves. Thank you very much.