Why are you going to Iceland?   Why now?  What is Iceland Airwaves?   All questions I've fronted over the course of the last few weeks as my time to go to Iceland got closer.  Over four years ago I heard about Iceland Airwaves music festival via Seattle's public rock radio station KEXP.  KEXP broadcast live from the event and it sounded like a lot of fun  to go hear the cutting edge of new international alternative to mainstream pop music.  So I determined to go.  When I decide I'm going to do something related to travel then its a done deal – it is happening eventually.  Fast forward to January of 2015 I had someone I could to enjoy Iceland and music festival with so I bought tickets to go 11 months ahead of time  for my partner and I -then three weeks ago my partner's Mom became seriously ill and could no longer go with me – so I was facing the same dilemma that prevented me from going in the past, only this time I was locked into a package deal for two. The light at the end of this tunnel was that I still would go on the trip and I had a friend who could join me very last minute.  The bummer was my partner and his new passport would be in Duluth, Minnesota reading about the trip via text message from me and on this blog.  The tough part is that I'm traveling with someone other than myself, or an extension of myself for the first time in years.  I haven't traveled with a friend since college – I've moved into the role of the solo travelor and I like how the shoes fit – but this trip was meant for two so two it must be. 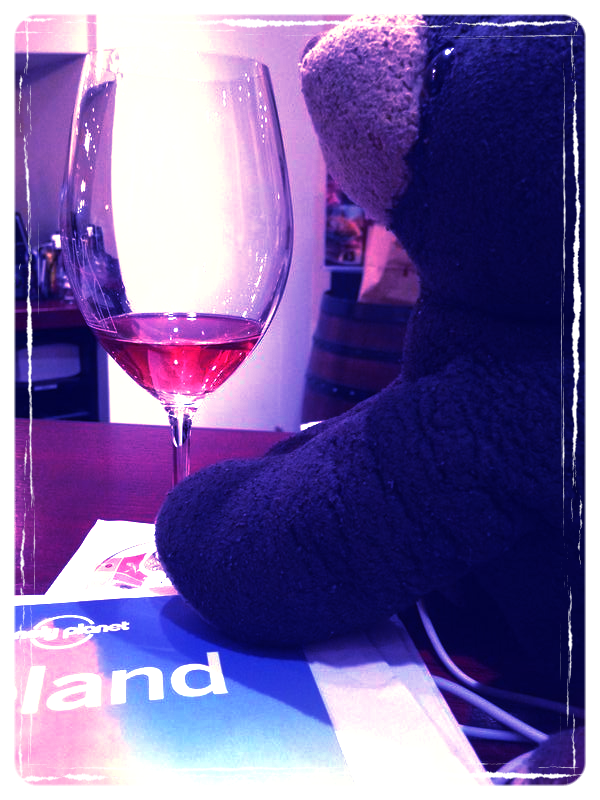 My stuffed bear Jimbo has also come along for the ride – he vowed to keep it together if I can't – he even helped me with my pre-flight glass of wine in the airport.   Iceland Airlines is an interesting experience for someone completely used to flying Delta.  The stewardesses still wear uniforms and appear happy about it,  and everything is in Icelandic and English, but you can't hear the announcements over the overhead from the crew or captain and absolutely no one seems to care.

Our flight was filled with what appeared to be international hipsters, there were many hoodies, beards, and trucker caps. Honestly, I couldn't tell if this is just what Seattlites and Icelanders all co-mingled on an airplane look like, or if the whole plane was going to the music festival.  On this flight I learned I had to bring my water bottle to the back of the airplane for refills from the crew, and resigned myself to the fact that there would be no orange juice or coffee coming down the aisles from our lovely uniformed stewardesses.   This is why Iceland Airlines is inexpensive, and why Economy class is Economy class – but I'd rather it be no frills and cheap than bad frills and more expensive. Seven hours later from Seattle we landed in Reykjavik.  I encountered this automatic sink and hand dryer in the Reykjavik airport bathroom and had to share it with the world.   Since I did not know how to use it I sprayed water all across an entire section of a previously pristine and spotless portion of the womens' bathroom. 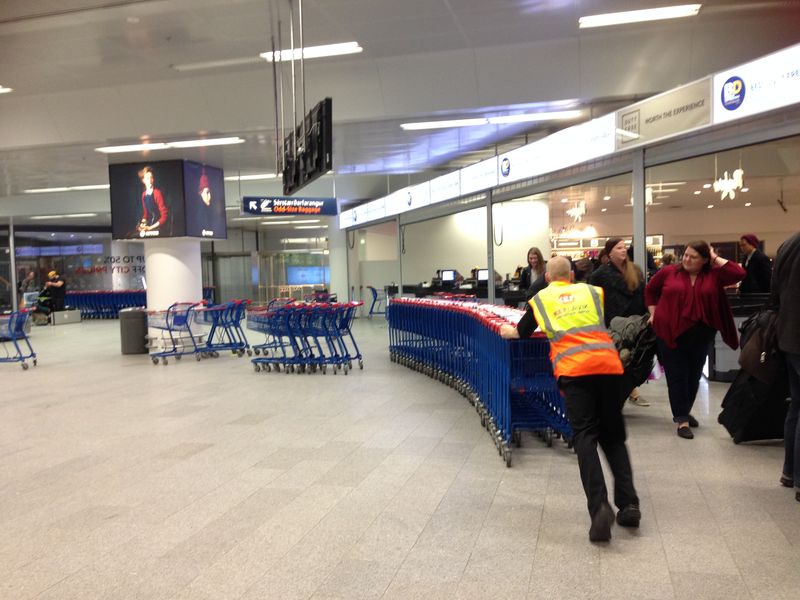 Next we faced passport control, luggage, duty free and customs.   My phone alarm started going off as I handed my passport to the lovely looking but slighty bored man behind the counter at 7:00am local time.   He thanked me for the passport as I was apologizing for the alarm going off, stamped it and sent me on my way.   Needless to say Iceland's border people are very laid back.  We then gathered our luggage and watched this man in the photo above complete amazing feats with crazy large amounts of luggage carts.  He was blocking out way into duty free so we had to wait and gawk, but it was amazing to watch his luggage cart ballet. 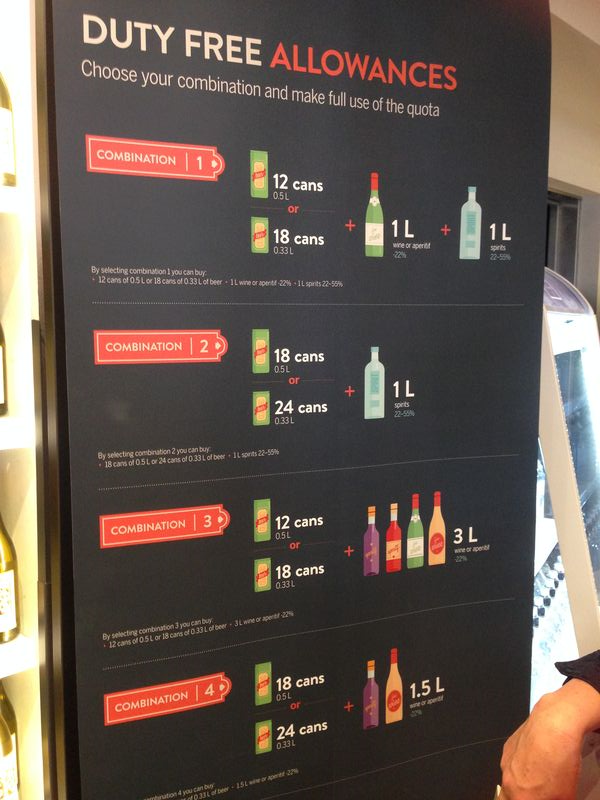 Duty free involved this very elaborate and confusing chart about alcohol purchasing.   We scratched our heads at it for a while and decided to get a bottle of wine and some good local beer and some licorice for good measure.   Then slightly afraid that we did the math wrong nervously pushed our luggage cart our way a completey unstaffed customs office.  There was just an arrow that said "exit this way."  There was not a single card to fill out for for entry, nor was I asked anything other than when I planned to leave.   Pretty much I think Icelandic border philosophy goes "Thank you for your visit and helping our economy, we don't want to know what you did here." 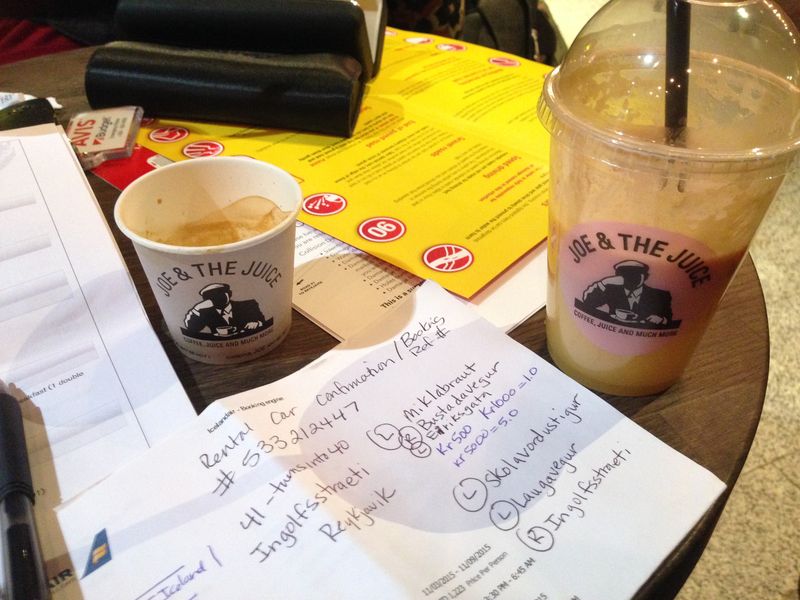 Contribute to the economy we did by renting a car online and attempting to figure out how to drive on Icelandic roads.   Not only are there new street signs, but there are roads with very very long names. Finding and typing those names into a GPS is also hard, and GPS being such a data suck I decided to write out all of the directions to Reykjavik with just the aid of an espresso shot and a special breakfast juice shot with ginger.  This photo below was my favorite part of the Icelandic driving guide. We decided that it is not worth it to ford any rivers with our rental car while we are here.  Meanwhile, we went and picked up our manual Volkswagen Polo from the rental car parking lot and eyed the dreary morning light above our heads gleaming grey down upon the volcanic earth of the strange landscape around us, then began our 45 kilometer drive into Reykjavic. 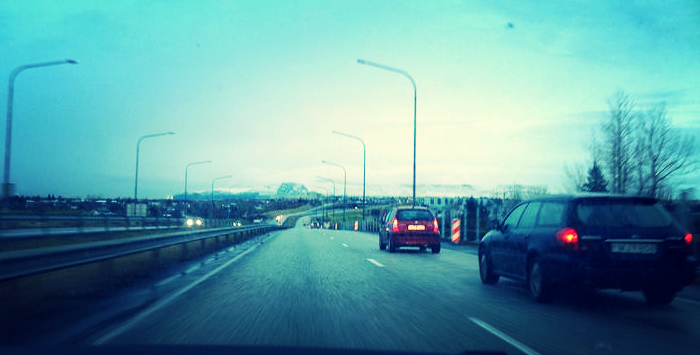