On the flight in neither of us got any sleep.  I didn't even try, I read Anthony Bourdain, watched "How to drive in Iceland" videos featuring a character named Elfish, and generally waited for the overly hot and stuffy ride to come to an end.  By the time we got ourselves and our luggage into the tiny rental car on the dark late morning of November 4th we were tired, but there was an entire day ahead of us in Reykjavik. My driving directions into to town, as easy as it seemed starring at my GPS in the airport, did not quite cut it because of the long named streets and tiny little street signs.  Luckily, Reykjavick is a coastal city so you can only go so far before you meet the ocean and then you must turn left or right.   Also, lucky for us, our hotel was on the water so we got there by landmark instead of by street sign. 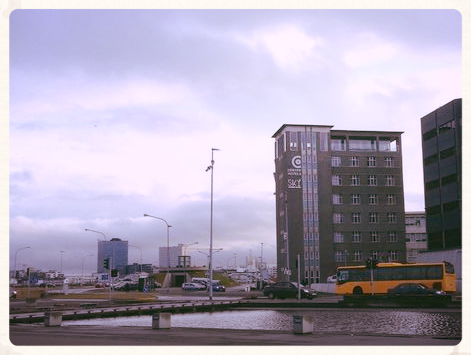 According to my Iceland Airwaves package through Iceland Airlines there was no guarenteed check-in until 2pm.  Reading the reviews of some other travelers in scenarios such as mine I went into the lobby of the Hotel Arnarhvoll expecting possible protest at our arrival and a steep fee if we wanted to check-in early.  Instead, we were met with a huge smile and an offer to find us a room with two twin beds instead of the double formerly booked for my partner and I and an apology that it would probably not be ready before noon.  We also found a free parking spot in the hotel's four parking spot parking lot immediately next to the door of the hotel.   Things were going very well for our sleep deprived selves. 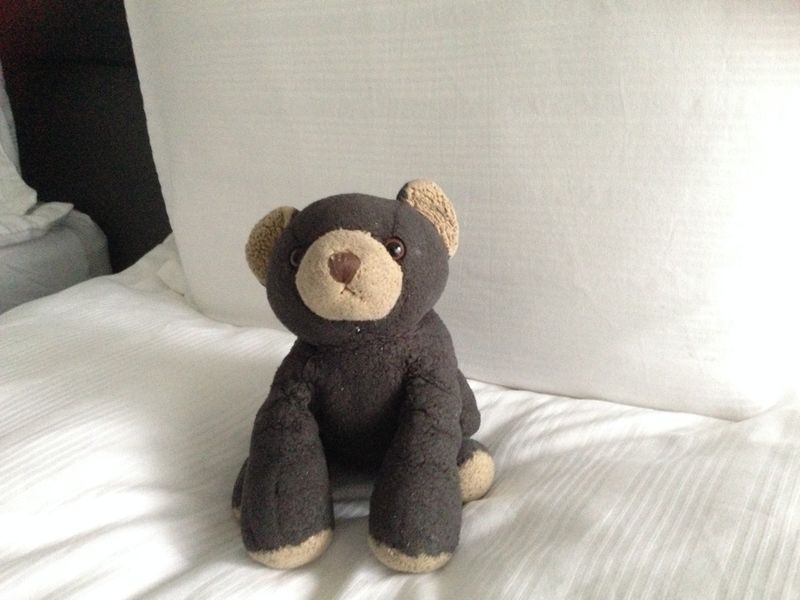 As our luck would have it we were able to check-in before noon to our now delux double room that magically opened up for us.  Downside – it was right next to the construction going on in the tiny parking lot. Upside- we had room for two girls to spread out and two beds.  Jimbo tested out the beds and gave them a thumbs up. Jessica tested out the access to the health center/spa and gave it a meh.  Meanwhile I tested out the shower. Half of our bonus room was bathroom, but in that bathroom there was only half of a shower door.   I managed to flood the place in my attempt to freshen up before we ran our day one errands and got lunch.  I'll spare you the photo, but essentially one should never believe that a half-shower door really does anything to prevent water from going all over the floor.

Our errands consisted of finding a grocery store, ground coffee, womanly accessories, and picking up our Iceland Airwaves festival passes. 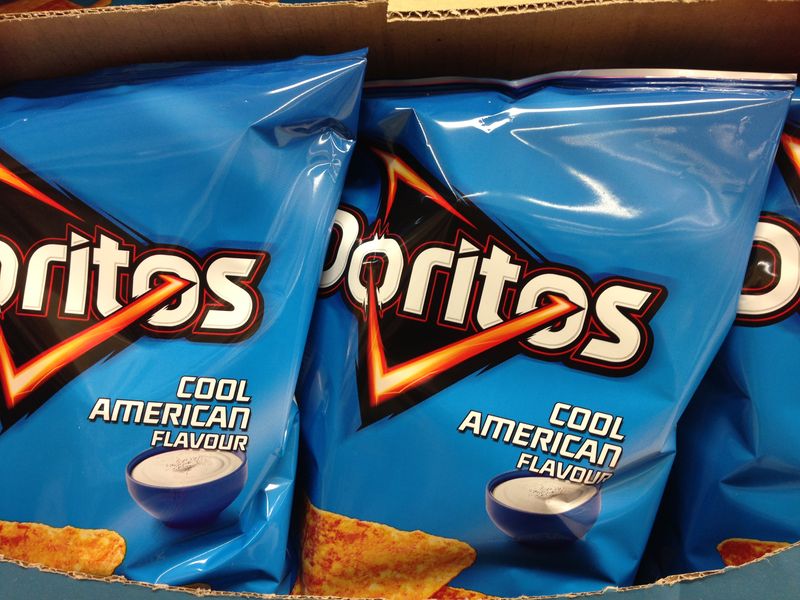 We found the grocery store and pharmacy no problem, realizing quite quickly that Reykjavik is a tiny little city.  I also began to realize in the grocery store that I was extremely hungry and apparently Doritos Cool Ranch flavor is Cool American flavor in Iceland. 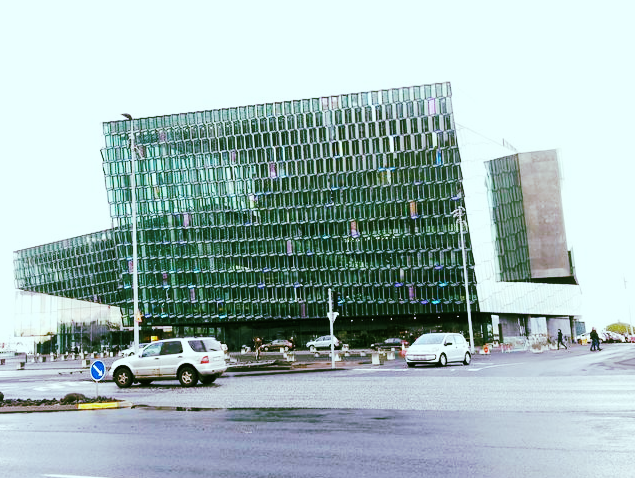 Just one more errand to the Harpa, Reykjavik's music and cultural center and Iceland Airwaves headquarters, conveniently located just across the street from our hotel, to pick-up our festival passes. 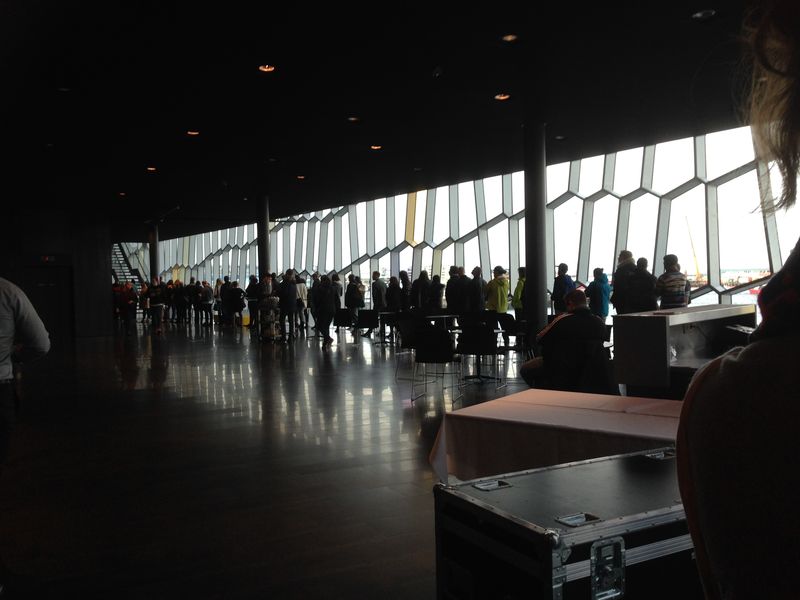 No one else appeared to have the same idea.  As we waited in line with at least 2ooo other festival goers my stomach decided to protest its current condition and I began dreaming of many different ways to appease it.  Unfortunately for us all our snacks we across the street in our hotel room, but the winding line moved reasonably fast.   We also scored some old school paper versions of the festival schedule as I found the website and app for the festival to be both information and international data overload.  I also didn't want to sign-up for a paid version of Spotify to enjoy the Wall Poetry throughout town, especially since I had yet to find any. 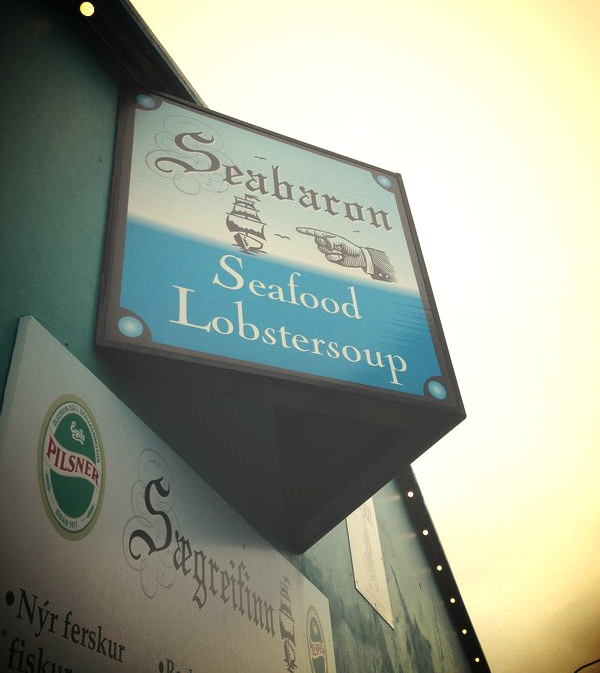 Festival wristbands neatly fastened to our wrists it was time for lunch.  We made the two harbor block trek to Saegreifinn or Sea Baron for the famous Lobster Soup I read about in the Iceland guidebook. The Sea Baron was a really simple establishment with no menu – just a sign that said Lobster Soup, with bread and the price, next to a refrigerator case where you could literally pull your fish choices from it.  This is a photograph of the whale meat sitting on that shelf.  As 40% of all whale meat is eaten by tourists, I decided that despite my strong desire to try it, I would refrain from satisfying my curiousity to do my tiny party in saving a species.  If all tourists stopped eating whale the industry would likely have to scale back, if not end its current practices, and our water mammal friends may survive the human race. 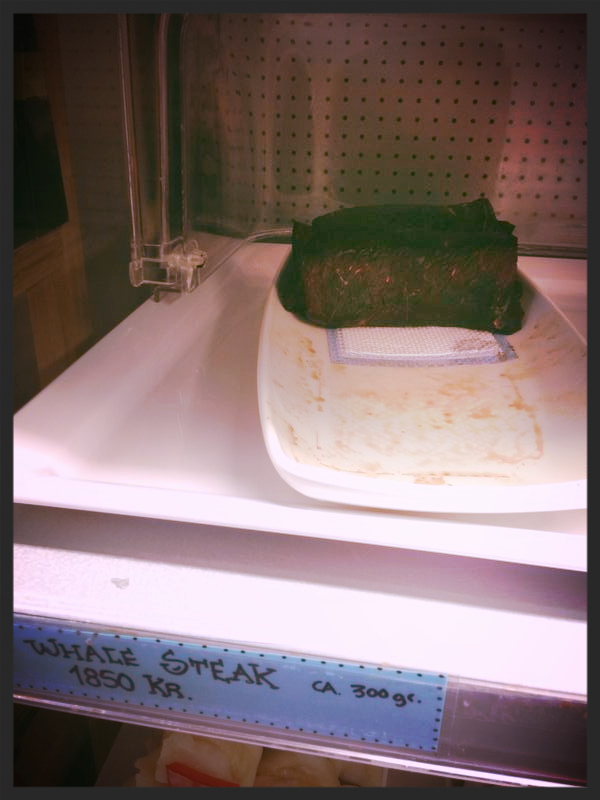 Back to the lobster soup – it was the most glorious tasting substance that has ever danced across my tongue after a cold wind blown walk. 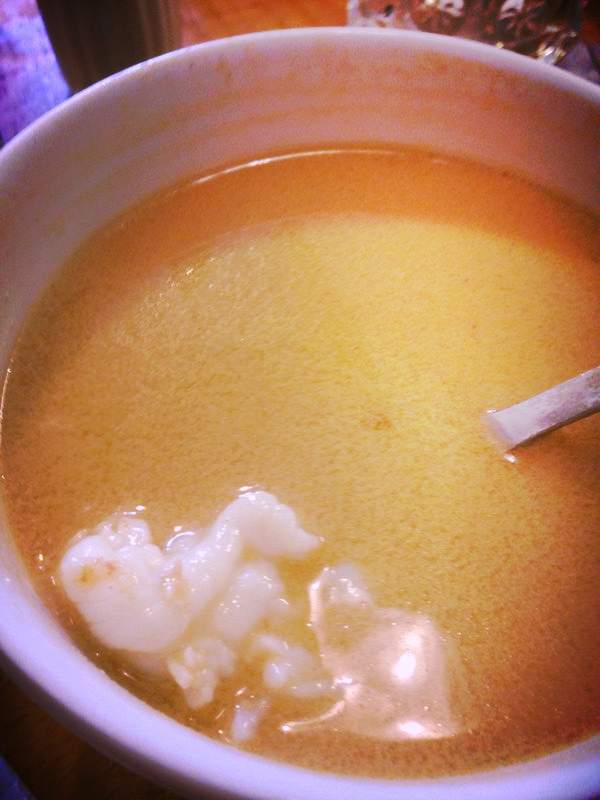 There were little chunks of lobster floating around in a flavorful vegetable broth studded with onions and bell peppers.  It tasted of rich seafood flavor, not heavy on the tongue just vibrant with ocean, lobster and vegetation.  It was surprisingly filling and as we attempted to eat it our body temperatures rose with the heat of the soup.  The very crowded establishment also thinned out surprisingly fast after the lunch rush. 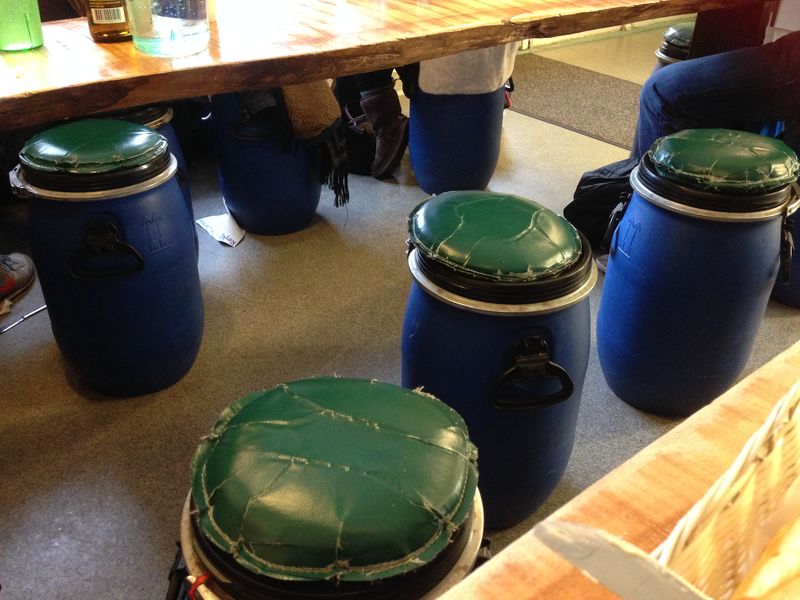 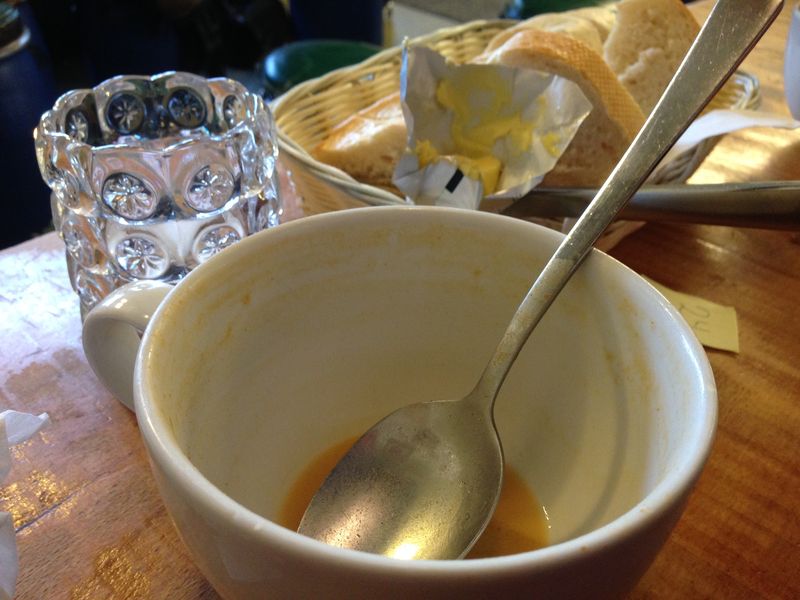 Lunch in our bellys we decided to explore a little bit more of Reykjavik.   The sun decided to peak out from the fully cloud locked sky and shine upon us. 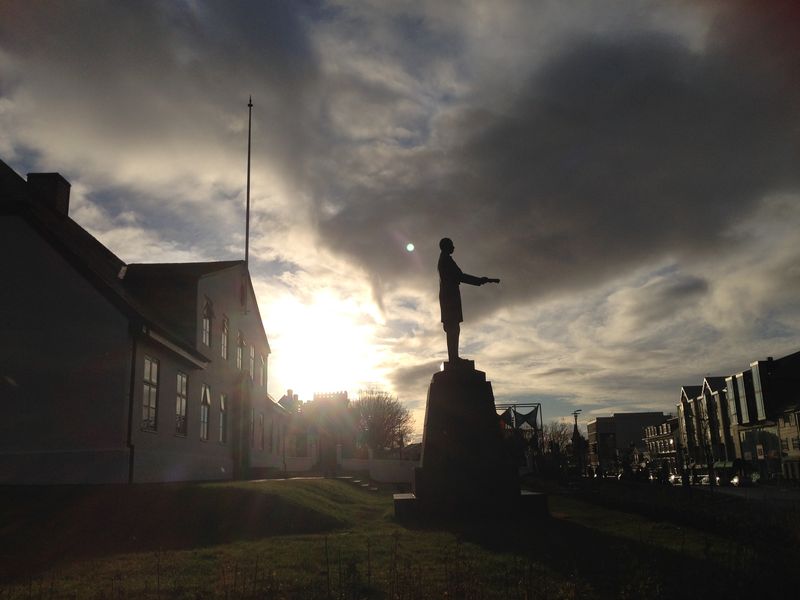 It even gave us the rainbow over the harbor from my post yesterday.  It was a beautiful afternoon and we were so tired.   At 3pm local time it was 7am in Seattle and we had not slept yet.  We went back to the hotel to review our options for the festival, being tourists in Iceland, and as the words swirled before my eyes on the page and my thoughts co-mingled with semi-concious waking dreams I decided to give up and take a nap.  1.5 hours later I woke-up a new woman.  Hungry again. 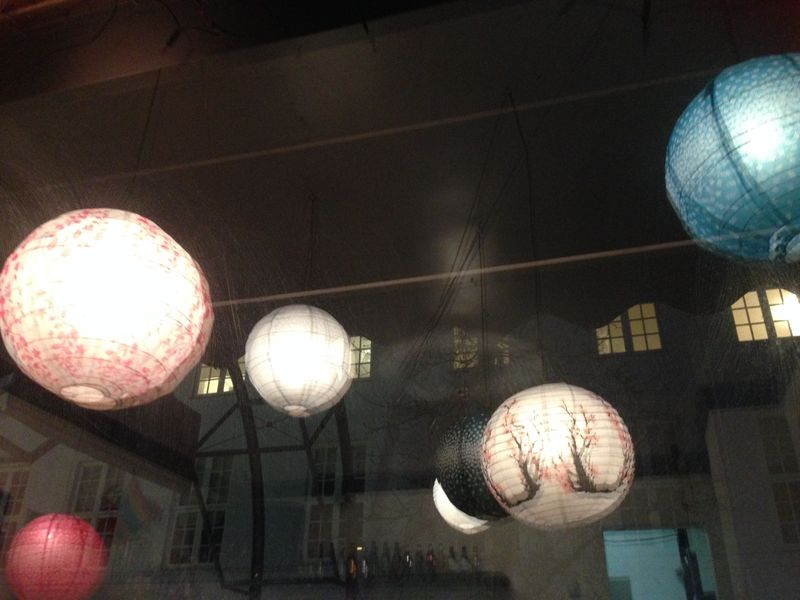 My friend agreed so we looked for a healthy seafood heavy dinner option and found Sushibarrin, a local sushi place using the freshest of fish making the freshest of interesting sushi rolls including such ingredients as Kimchi and wasabi peas. 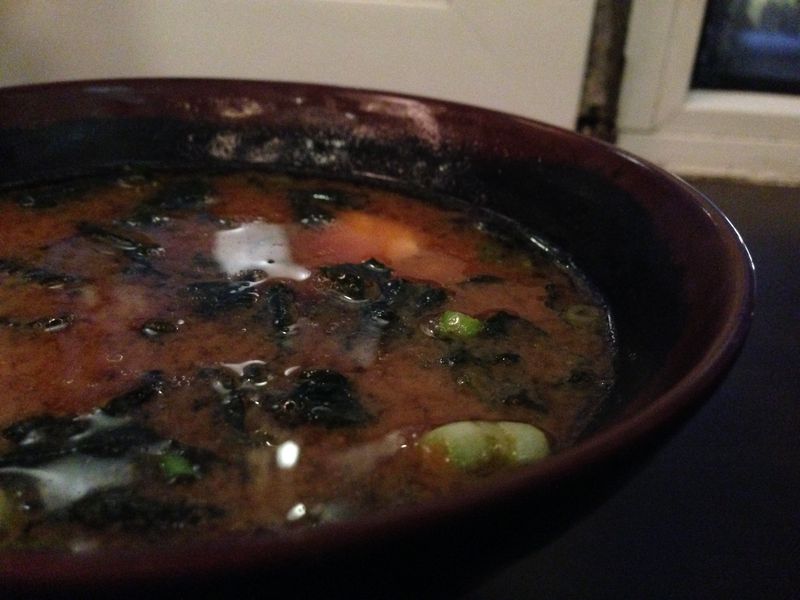 The fish miso soup was slammin, little light chunks of salmon all fluffy and flavorful floated inside it landing on my tongue like little light pillows of joyful taste.  Not a hint of fishiness exuded from the soup or the fish. 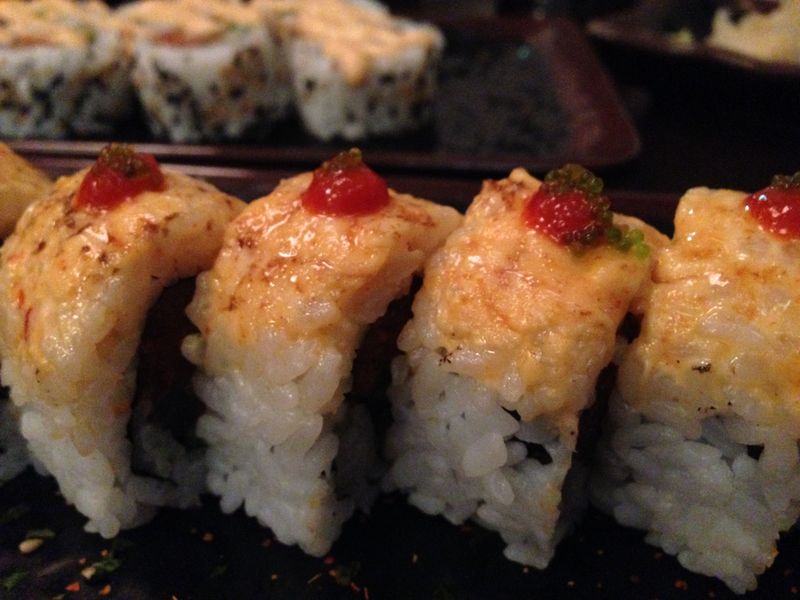 We followed the soup with a Kamikaze and a Rock & Roll.  Both were very interesting combinations for a sushi roll, the rock & roll's toasted sesame seeds were my favorite. 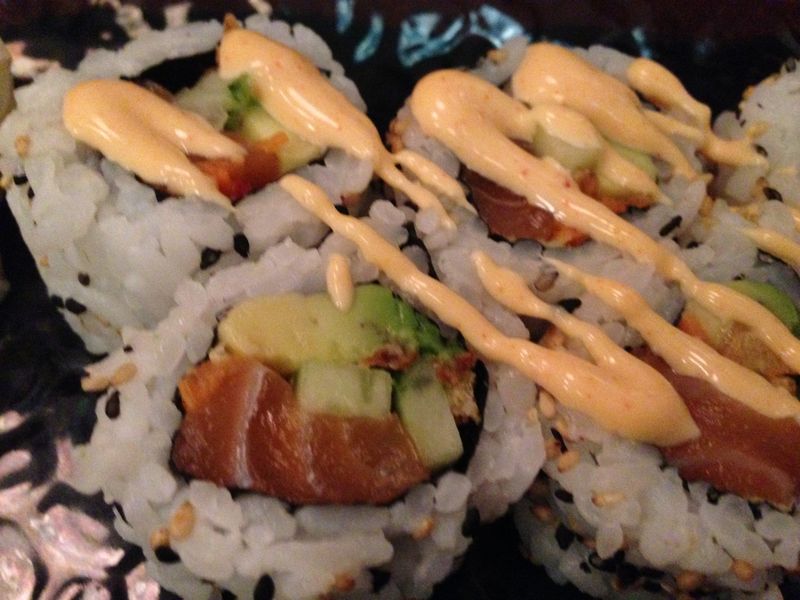 Little morsels of crunch sandwiched along side fresh fish salmon and avocado – nummers.  After dinner we went back and prepped for an evening of adventure.  Jessica had identified a Lindy Hop gathering and I wanted to check out some of the music festival.   I also used what was left of my brain to map out a museum schedule for the next day, and a list of questions to ask for attempting our trip into the countryside of Iceland to see the natural beauty everyone talks about. 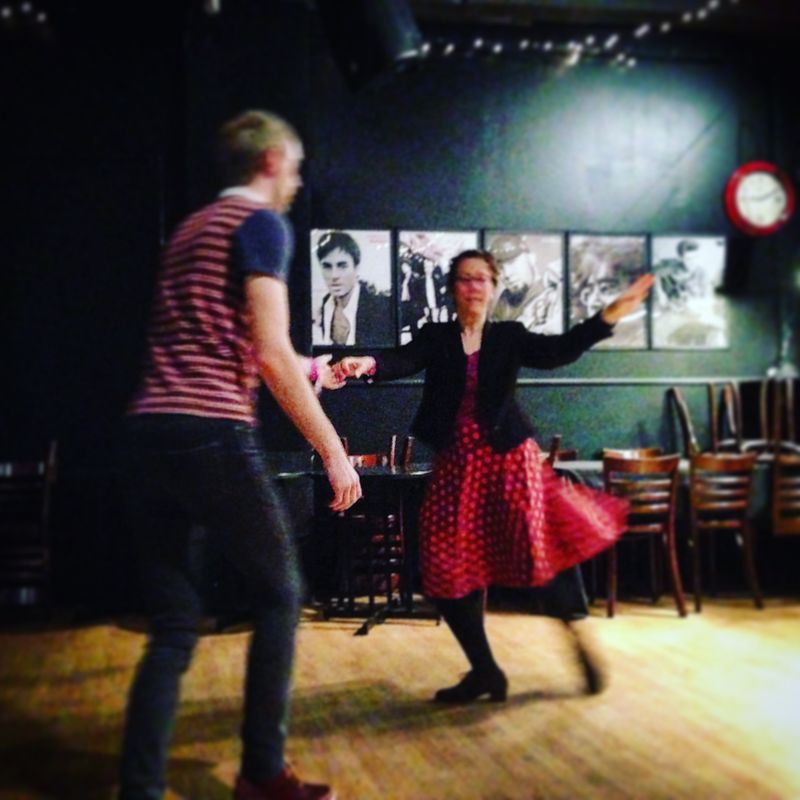 The Lindy Hop location ended up being quite obscure.  A detail left off of the Facebook invite Jessica had.   It was located a place called Rio Sport Bar.  Upon entering Rio Sport Bar we were greeted with large TV screens playing football (the thing we Americans call soccer) slot machines, pool tables, and a bunch of Icelandic sports fans.  This did not appear to be the location for Lindy Hoppers.  Upon close examination, checking and rechecking the address, consternation, and finally asking the lady cleaning the women's watercloset, we were directed to the secret doors behind the pool tables that slid open to a secret space with a dance floor.  In this secret place were four individuals waiting for a few more to show up so everyone could dance.  Jessica got right into the swing of things. I left her to dance and chat with her international community and headed in the direction of the closest airwaves venue to see what I could find. 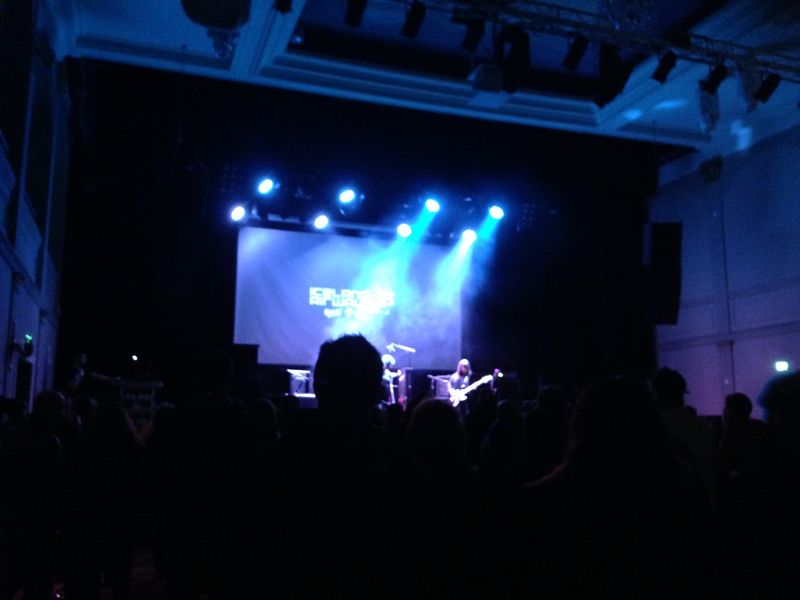 I found a band called Börn, an all women hard rock band with a lot of musical skill.   It was totally not my type of music but it was really cool to see women with strong musical talent fully rocking it out hardcore style.   I took stock of the festival setting around me, trying to observe how people engage with the music and the venues.  I realized that our hotel is amazingly situated as the Harpa, across the street, houses 3 seperate venues of nightly music.  It is also very beautiful at night. Both inside and out – though inside was definitely filled with the smell of fish and chips and riddled with all the faces of music fans. 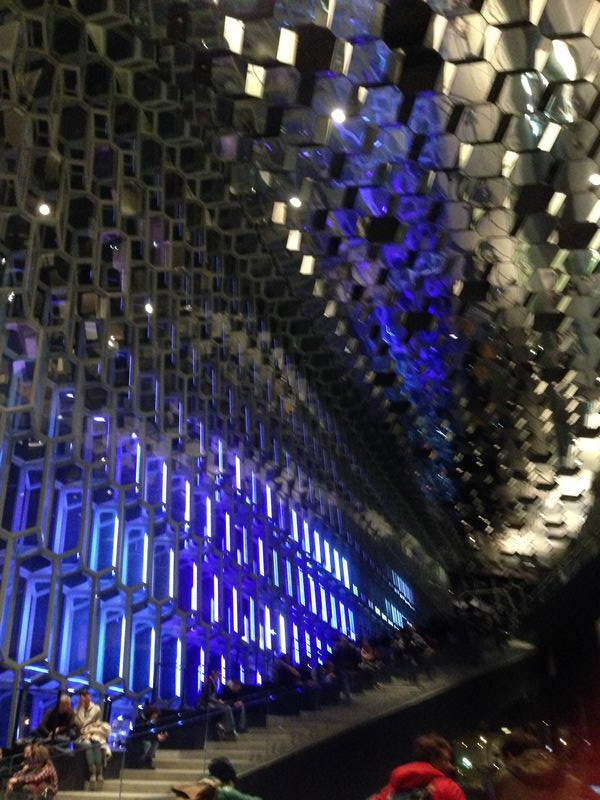 As I wandered the Harpa I could only find the entrance to one of its three venues so I decided it must be a sign and I should see whatever band is happening in there.   I ended up not seeing the band very much at all because of the large crowd of tall bearded men in front of me, but heard the most beautiful of music coming from a band called Arstodir. 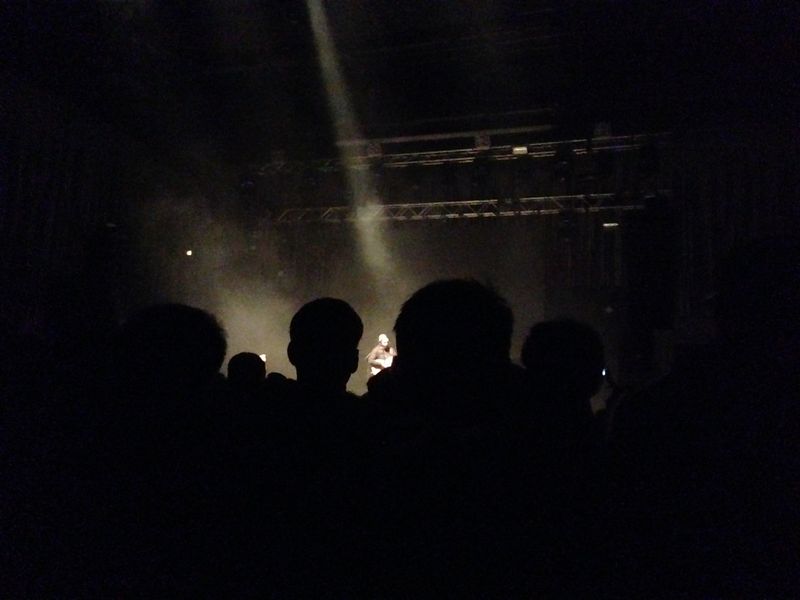 Their sound was orchestral and harmonic using a blend of synthesizer, cello, bass, violin, two guitars drums and four angelic voices – it was just what I needed after a long day to start a music festival experience.  I walked home ready to write and sleep the sleep of a happy traveler filled with experience. 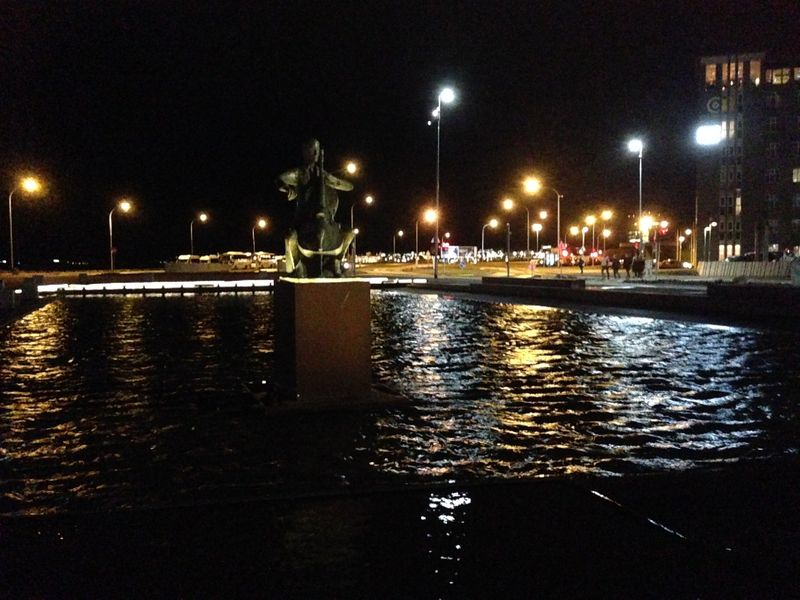