After my epic Saturday of museums, food, booze and music I woke up quite groggy and slow on Sunday.  Jessica, on the other hand, was quite perky, not having ingested seven courses of alcohol along with seven courses of dairy, and ready for adventure to the South Shore of Iceland. 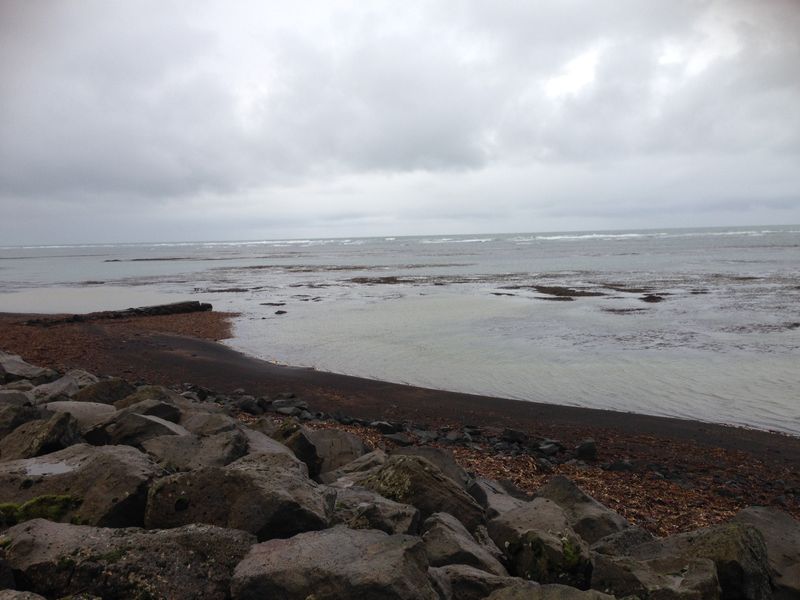 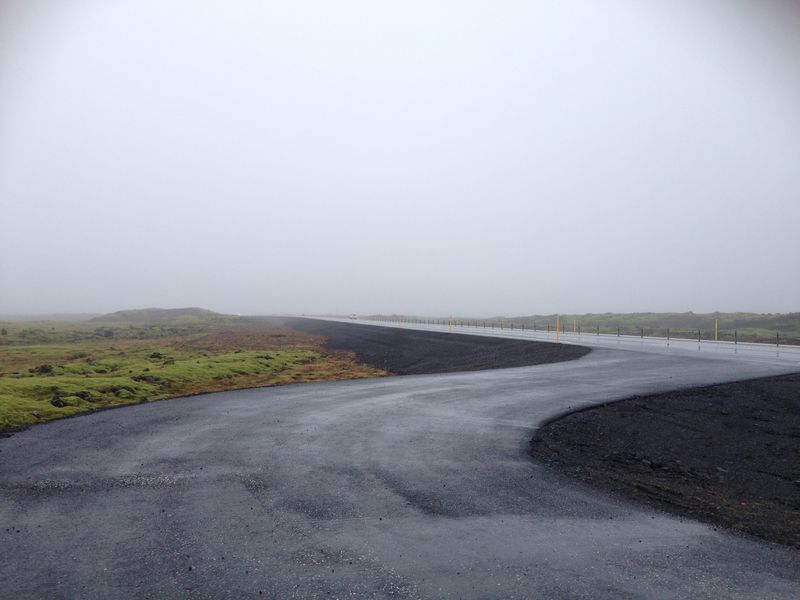 As I was moving at the speed of a glacier we did not get on the road until after 11:30am eliminating all opportunity to make it to Vik and catch a ferry to the magical island of Vestmannaeyjar where all the tourists go – so I directed us with no prior research toward Eyrarbakki and Porlakshoen.  Deathly afraid of car sickness due to my already feeling a bit like death I wasn't able to do much reading in the guidebook to better synthesize a plan than go down Highway 1 aka the Ring Road and hope for the best.   Jessica didn't do any other research than "head south and see water" so that is what we were doing. 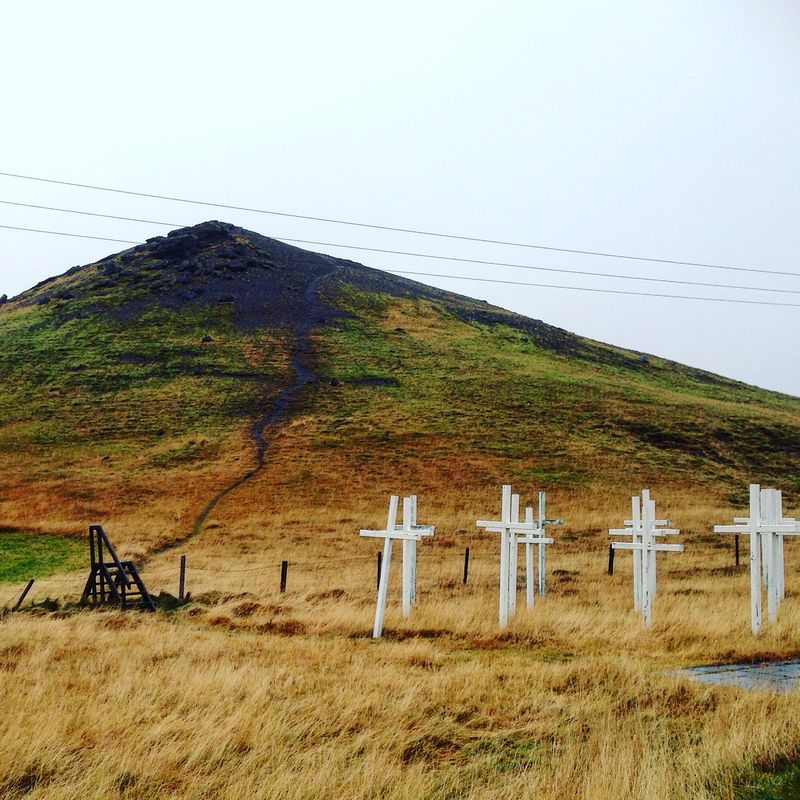 We saw this curious roadside attraction with a standard Icelandic "information" booth so we pulled over.  Turned out the information was all in Icelandic and an advertisement of the island we were not going to have enough daylight to get to on this fine overcast winter day.  There was absolutely no information as to what this collection of crosses was for there or in my guidebook, so we just pondered that it was symbollic of volcano deaths or something to that effect.  I took the opportunity, since we were not moving, to check my guidebook to read about the town we were going to pass on the way to the shore. 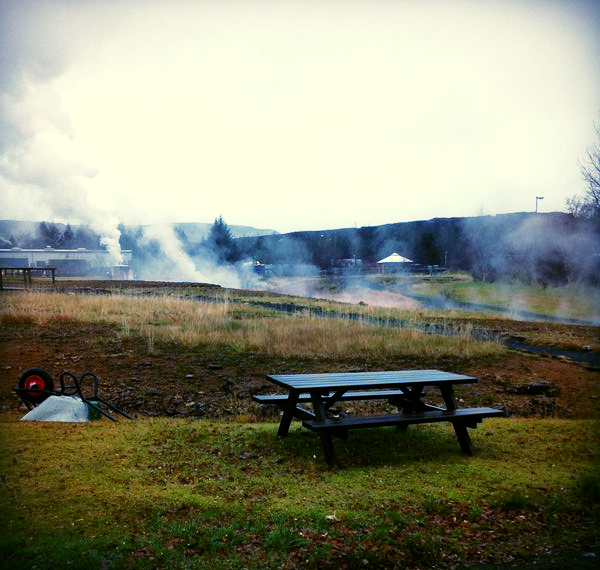 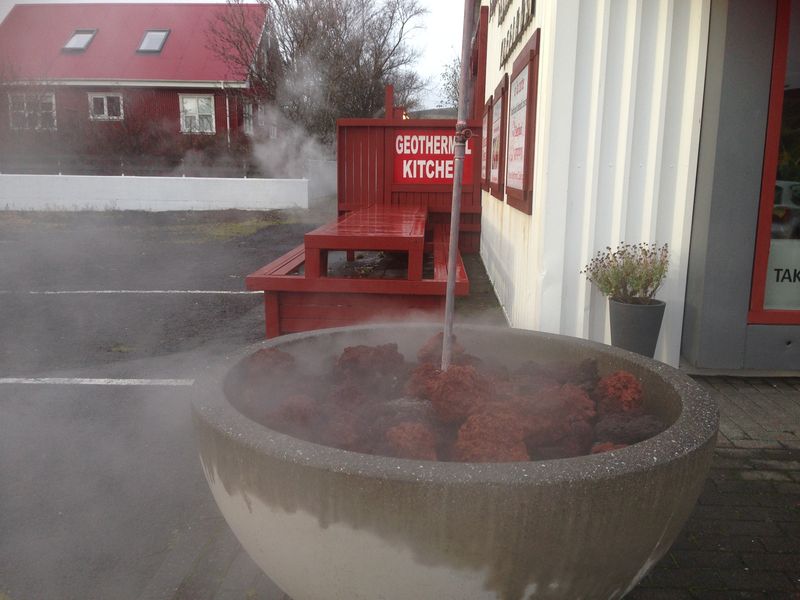 Pretty much the whole area is just constantly steaming sulfer smelling heated  such and such everywhere.  Unlikely for us – everything was also closed.  So no park, no paths, no geothermic cooking class – just steam and closed doors because it was off-season. 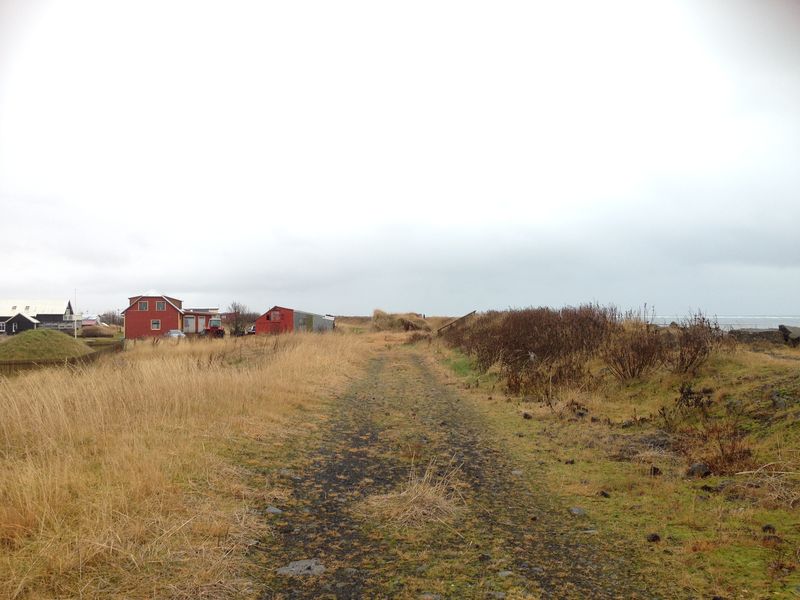 We continued down the road to find the seaside and a sight of the Northern Atlantic Ocean.   We passed some extremely depressing architecture built in swampy looking depressing areas coated in cloudy grey light, followed by a structure that looked like a prison.  Upon reading about the fishing village known as Eyrarbakki in my guidebook it turned out that the structure was in fact a prison, and that there was really reason to go to Eyrarbakki at this time of year because everything was closed.  Since we were already there we decided to find a path to the ocean. We parked the car and walked up an embankment behind a house with a lively coup of chickens, geese and ducks cheering us on, then we trudged up a damp set of slick wet wooden stairs to be greeted by an arctic ocean wind at the top.  It reminded me of a winter breeze off of Lake Superior, cold, damp and uncomfortable reaching right into your jacket and freezing you on a cellular level. We took a few photos and turned immediately around.  On the way back to the car I stopped at the coup to discover a huge super fuzzy rooster and did my best to get a photo of the Icelandic chicken.  "Even the chickens are furry here! " I exclaimed to Jessica who was shivering next to me during my fowl photoshoot. 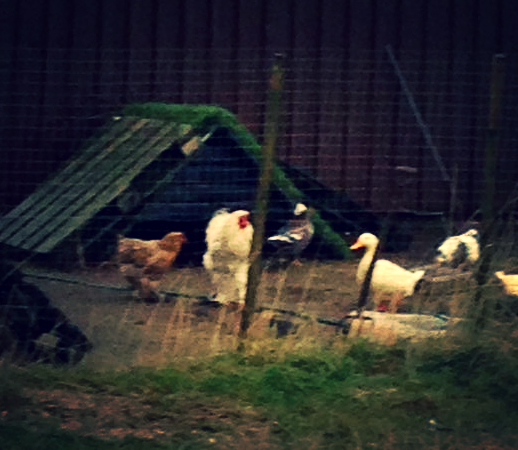 After Eyrarbakki we headed for Porlakshoen, because why not.   We found a church and a graveyard and a cool looking viking ship statue, but not much else going on.

On our way back to Hvergerdi I discovered we had just driven the Blue Circle of Southern Iceland, the sky celebrated with us by having a sunbreak and a rainbow.

Then a flock of ponies crossed the road in front of us. 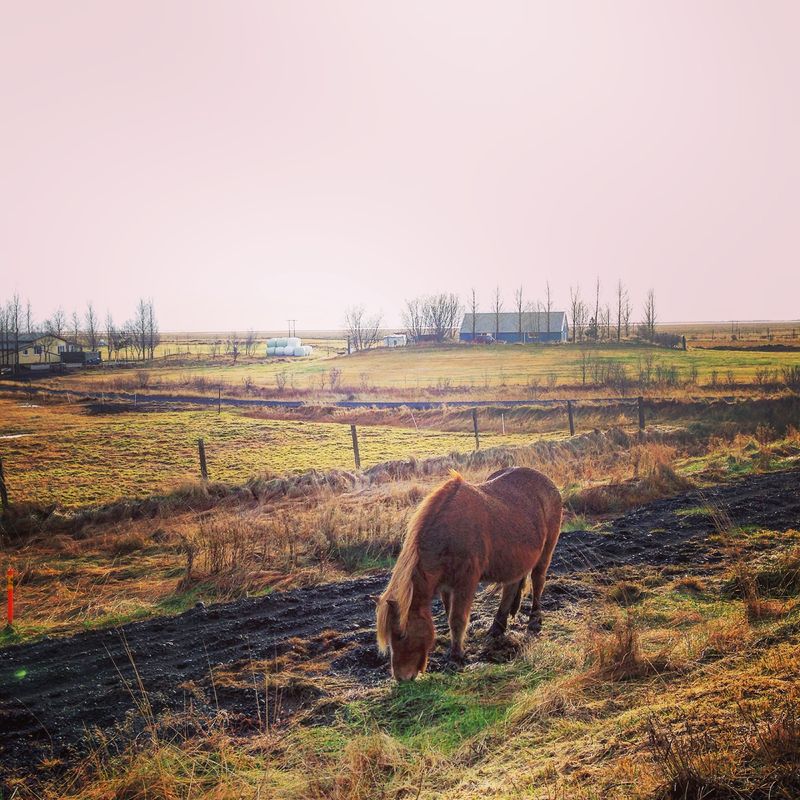 Two picturesque moments back to back.  It was a sign that we needed lunch and thought we would try Hvergerdi one more time to see if anything was open.   We were in luck, there was a tiny little "diner" with one thing on the menu – the Icelandic national dish – lamb soup. 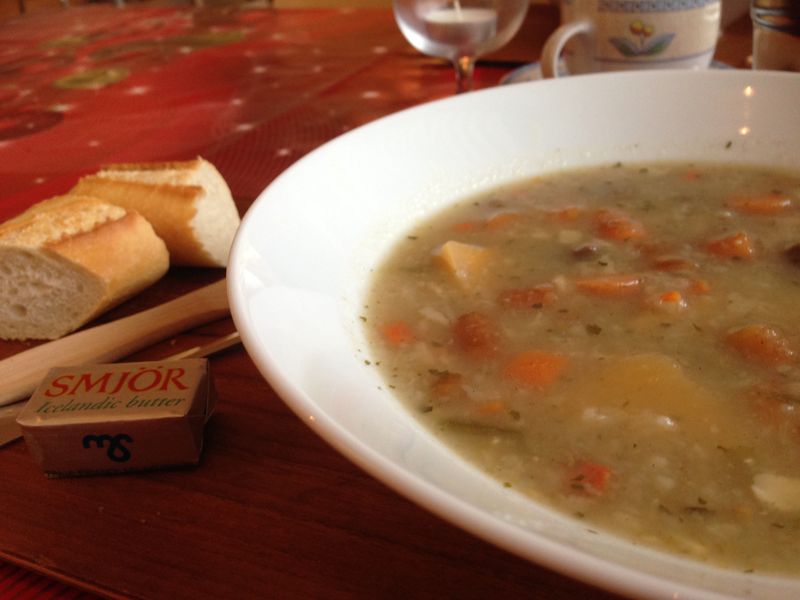 After a hungover morning driving through the middle of nowhere fighting off car sickness this was the best soup I have ever had in my life.  It also cured my hangover and brought my appetite back.   Pretty amazing stuff – even if we were clearly the attraction of the day in the small town diner off the highway. 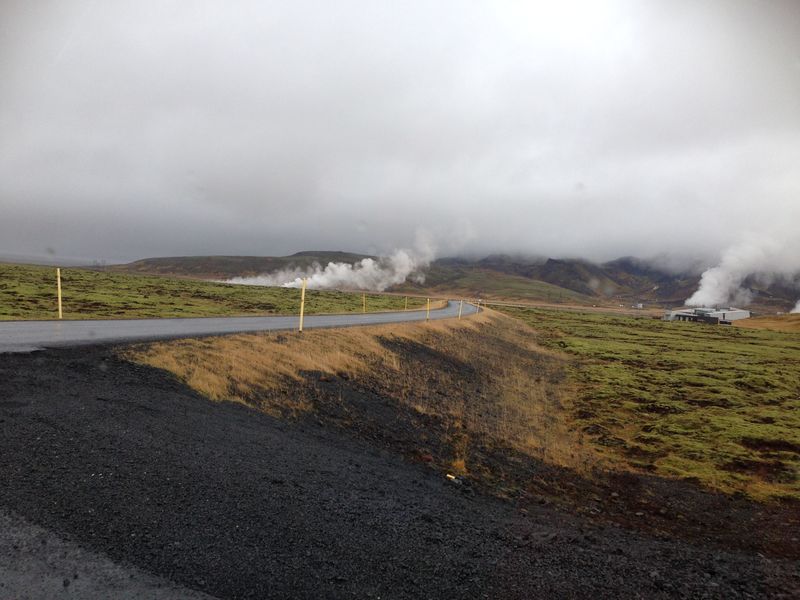 On the way back we passed the geothermic power plant and more steam.  When we got back to town Jessica wanted to run an errand to the local mall in the attempt to return the fur she purchased earlier in the week, after the discovery that same company also sold baby seal fur when we were at Geysir. 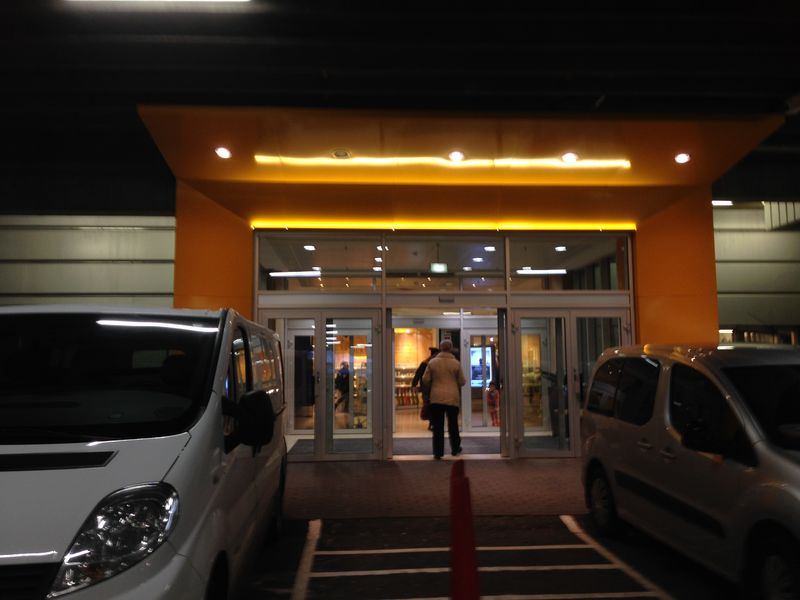 Needless to say we entered the seventh layer of hell, and the people at the store would not accept Jessica's request for a refund of the fur.   The lovely ladies behind the counter also lied and said that nowhere in Iceland are returns provided, just exchanges, luckily Jessica held her ground and knew how to do internet research (and was able to return the fur on Monday before we left).

We got back to our hotel just in time to go for a walk to Cafe Loki for dinner. 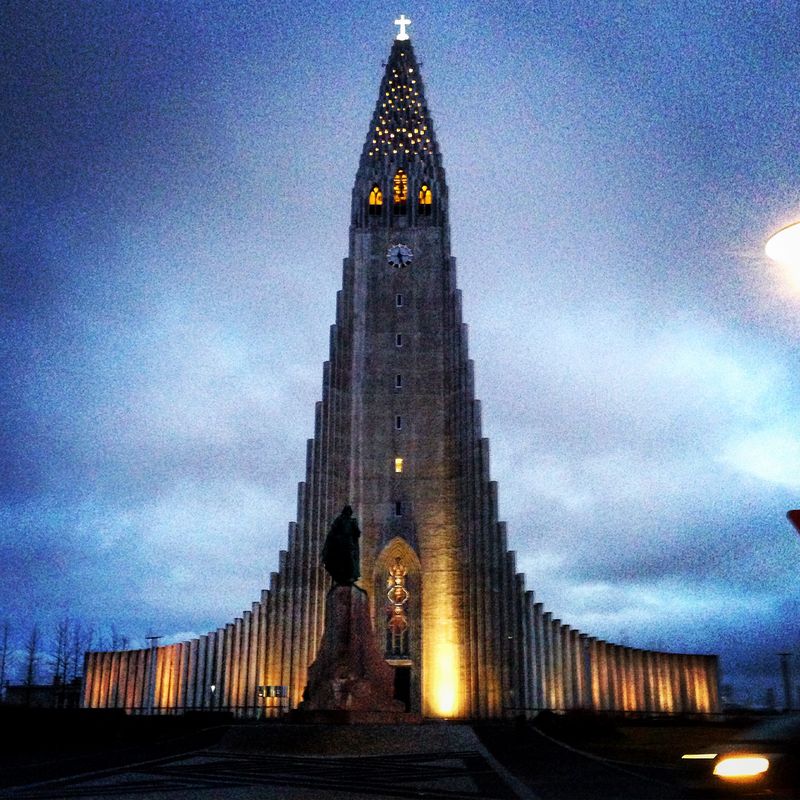 Cafe Loki is situated right across the street from the Hallgrimskirkja, a church completed in 1974 that took 34 years to build.  Its architect Gudjun Samuelsson, did not live to see its completion. The statue in front is Leifur Eiriksson or Lief Erikson (as we call him in Duluth, Minnesota) presented to Iceland by the United States on the 1000th anniversary of the Alþing (the first actual democratic institution created by any country of the world). 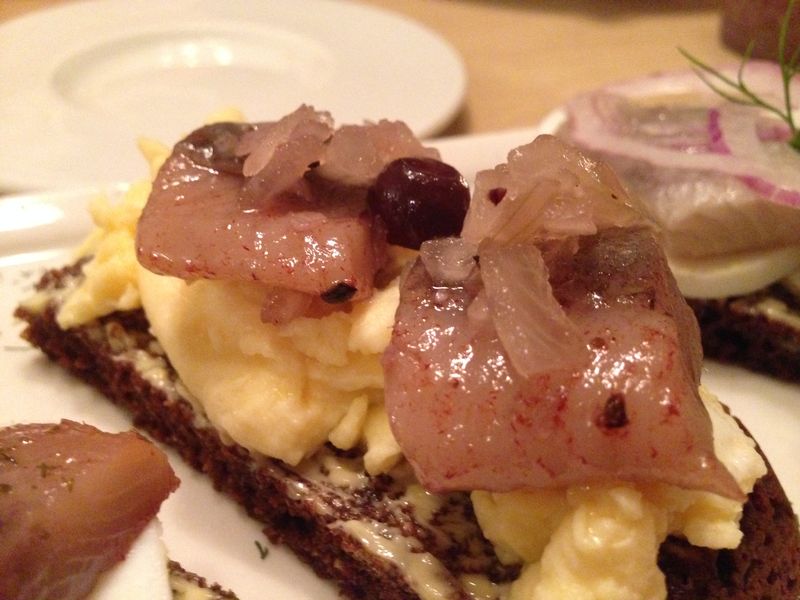 Time running out on my Icelandic eating adventure I convinced Jessica to go in with me on a pickled herring plate. I figured if I was to like pickled herring anywhere in the world it would probably be Iceland.   I was almost right.   I liked two out of three of the versions, but I could only eat the herring off the top of the sandwiches because I ordered this dish of fish gratin as well. 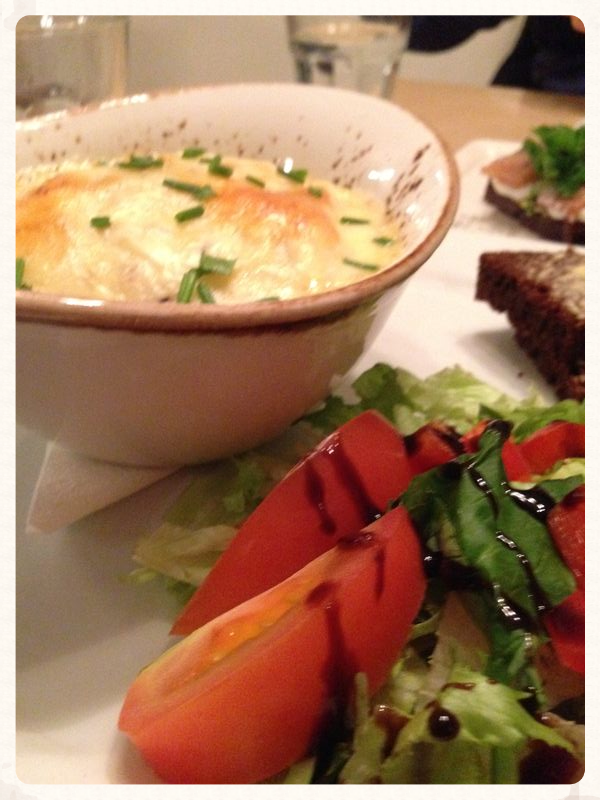 I never thought that fish and cheese would be good together until I was in Iceland – but after a week of phenomenal fish and dairy it seemed worth the risk, plus it came with a salad. 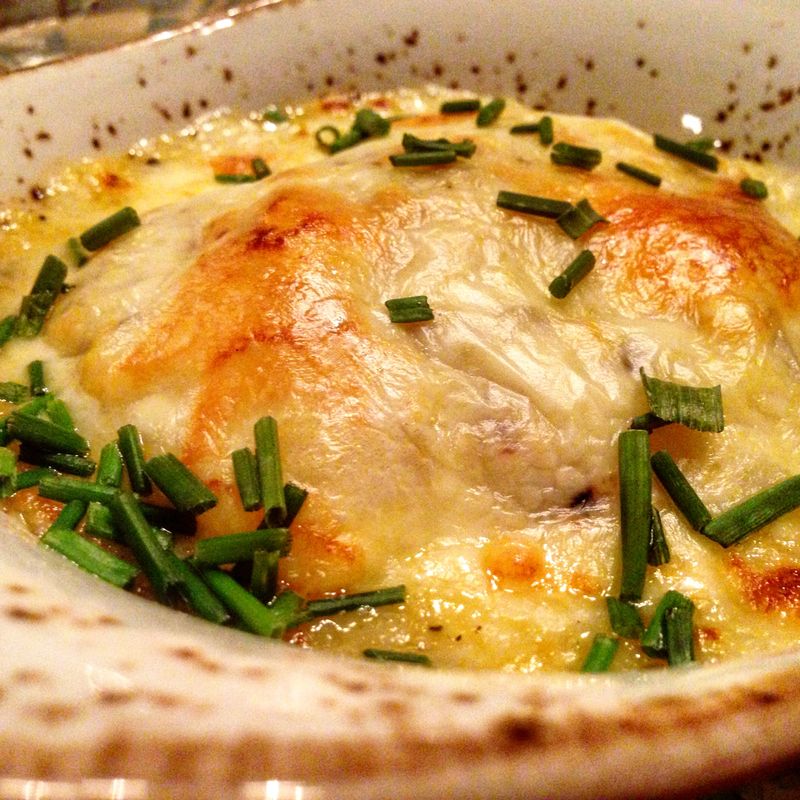 It was phenomenal and phenomenally filling.  Luckily, Jessica just ordered dessert so she helped me with the rest of my slightly wasteful seafood fest.

The dark of night came upon us and I was officially tired and all the Sunday music venues seemed so far away.  So I opted to stay in an fiddle with my pictures and blog stories – but there was one more food adventure to be had.  The Icelandic hotdog experience. 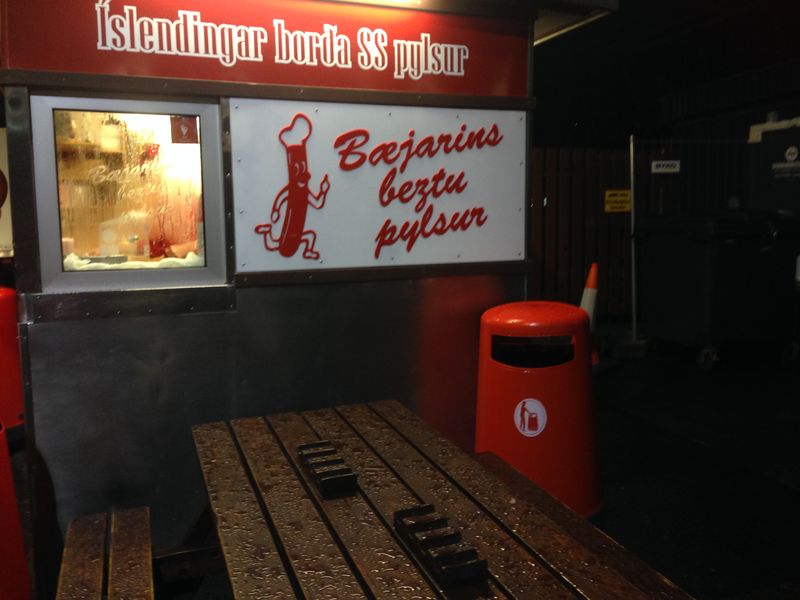 Iceland not only loves their hotdogs, one of their hotdog stands has been named the best in Europe (is Iceland really in Europe? another question for another day).  It would be these guys featured above.  A hotdog is only 400 kronas, by far the cheapest meal I had in all of Reykjavik and greater Iceland. 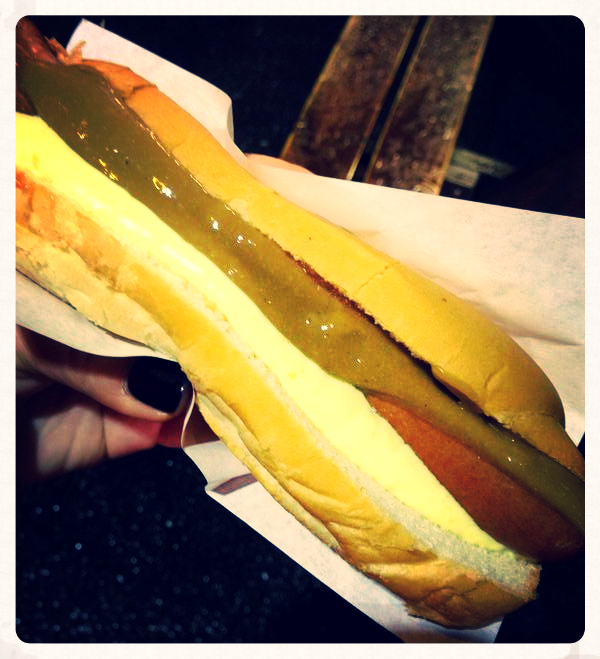 Covered in two types of mustard with crunchy fried onions beneath the natural casing hotdog, an Icelandic hotdog is quite an experience.  It pops and crunches in your mouth simultaneous to the two mustards contrasting flavors of tangy and earthy. After all the uniquely fabulous seafood and lamb this trip brought – to culminate my culinary adventures in Iceland with a hotdog was a bit ironic, at the same time as it was satisfying. 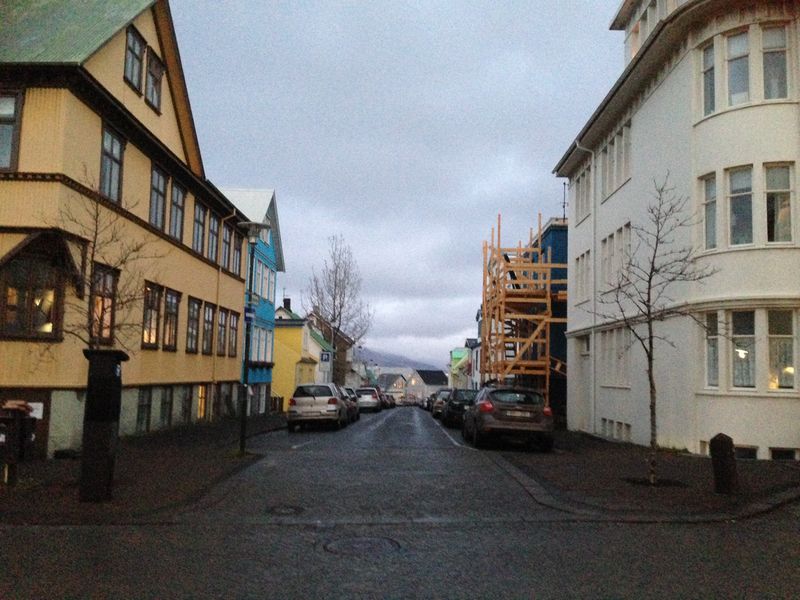 Tomorrow would be my final day on this quick trip to a mysteriously epic island in the North Atlantic, it was time to go to bed so I could handle the long day ahead.