The first time I came to Iceland Airwaves in 2015 I did not know much about the phenomenon called "off-venue" shows. I just ran into them throughout the town on my way to this or that museum during the day then went to the evening concerts included with the festival pass. It turns out that these off-venue shows are the heart and soul of the music festival. Most, if not all venues that can host music throughout the downtown center of Reykjavik, participate filling the entire city with music for hours on end. 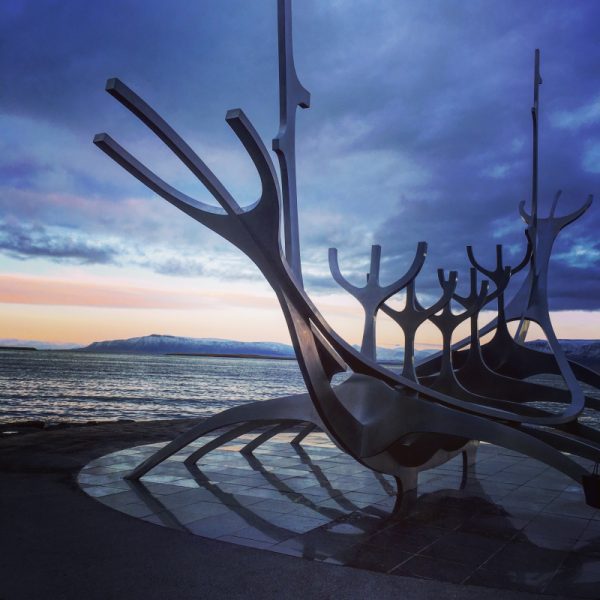 "That can host music" is a very loose term, as you can find music in clothing store windows, squeezed into attic bars, coffeeshops and in the aisles of bookstores. As I was exposed to this music festival thanks to Seattle public radio station KEXP's live broadcast from an off-venue location, this year I wanted to find their off-venue and document the magic. Or at least see what the scene I listened to for the last 7 years looked like with my 4 other senses. 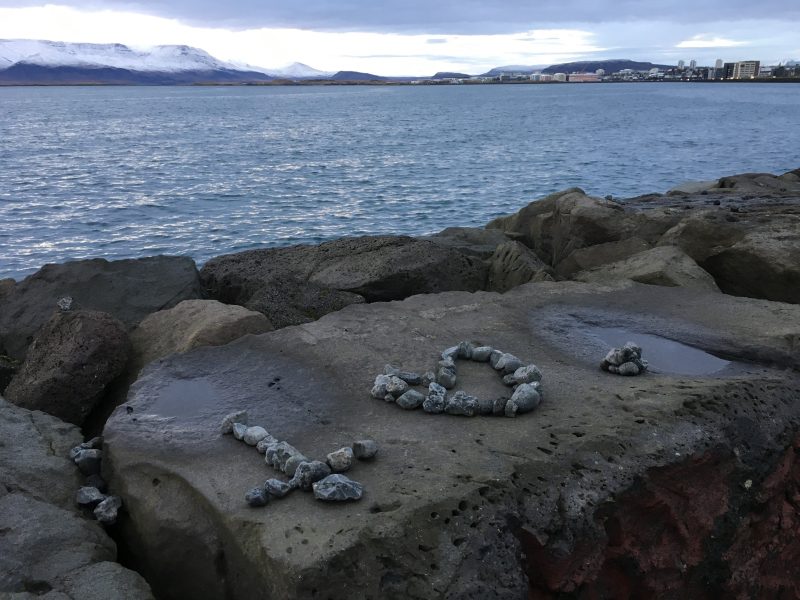 The 2017 Iceland Airwaves app is quite the handy tool, directing us almost directly to all of the music on and off-venue throughout Reykjavik. It told us that the first show at Kex Hostel, the location of KEXP's live broadcast, was at 13:00 so we took the morning to explore the city on foot and get some tasty lunch with the plan of going to Kex near 1pm. 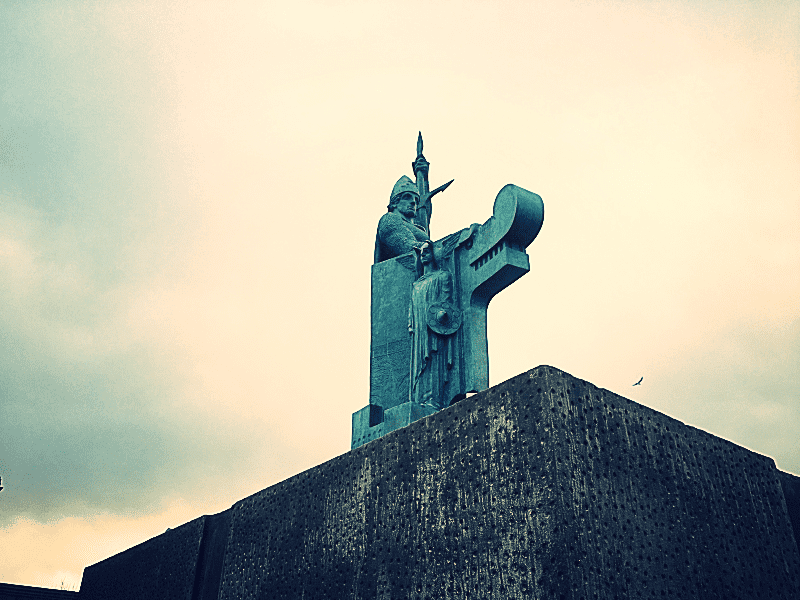 On our explorations we found this guy (statue of the founder of the settlement that became Reykjavik)  overlooking all of these cranes. 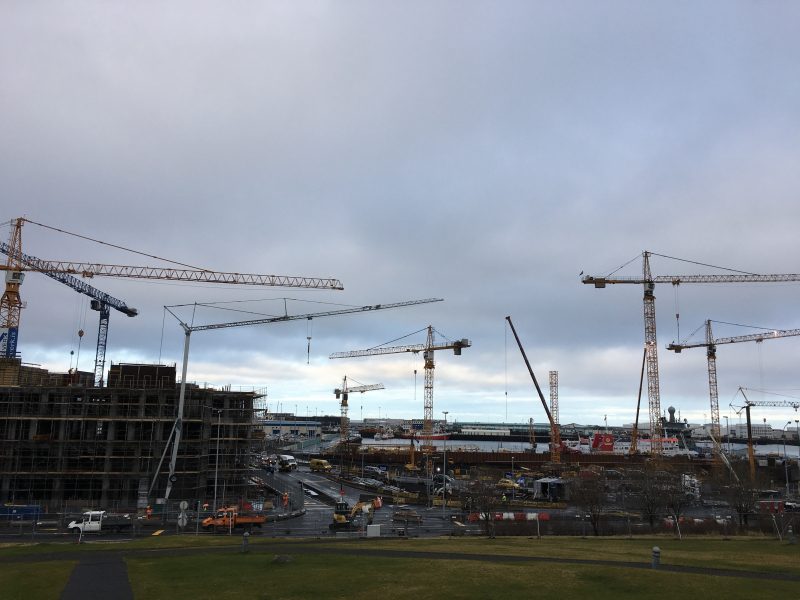 It appears that Reykjavik is under a bit of construction. We joked that the cranes migrated with us from Seattle. They for sure have made being a pedestrian a little more difficult in the harbor corridor. We walked back up the hill to see the iconic church, Hallgrimskikja. 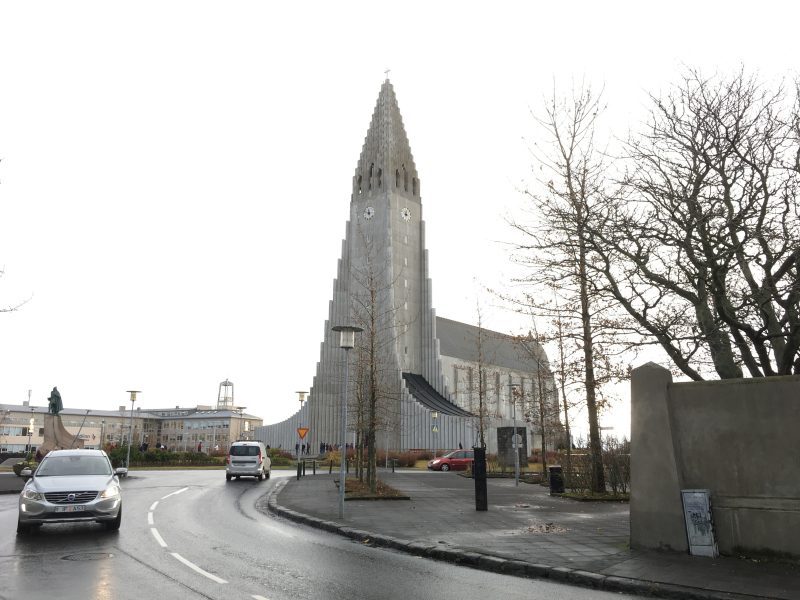 We got to go inside – it looked and smelled a lot like a church.  Then we saw this really cool green roofed restaurant while standing under the Lief Erickson statue the United States gifted Iceland (on the left hand side of the photo above). 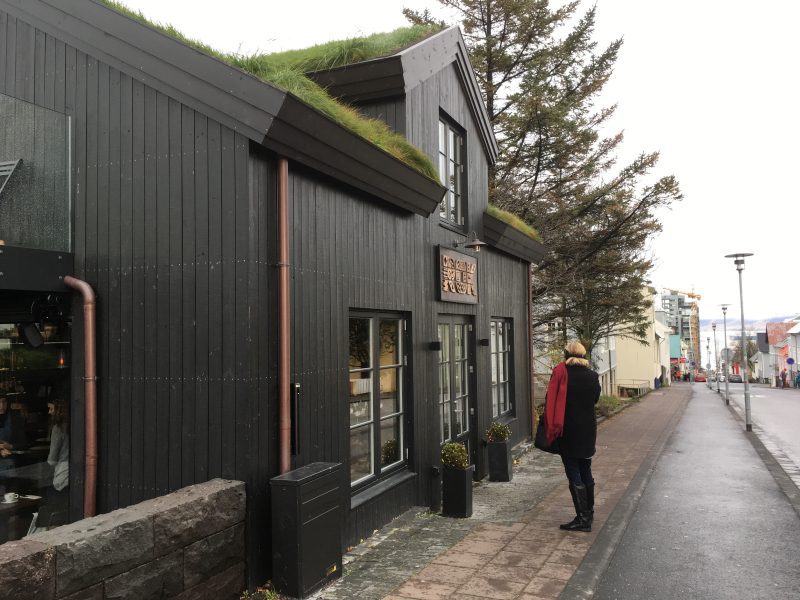 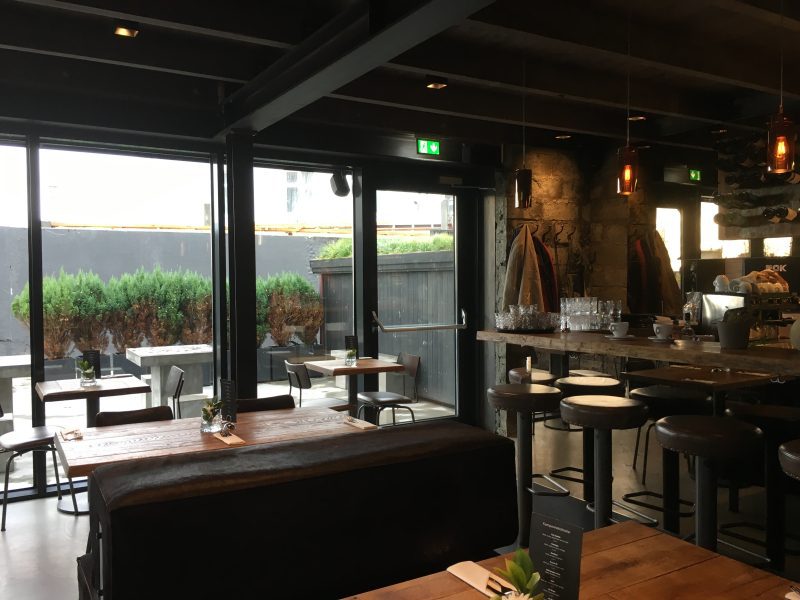 It was a perfect little place that smelled of vegetation and wholesome food. So I of course ordered salad and fish pie. 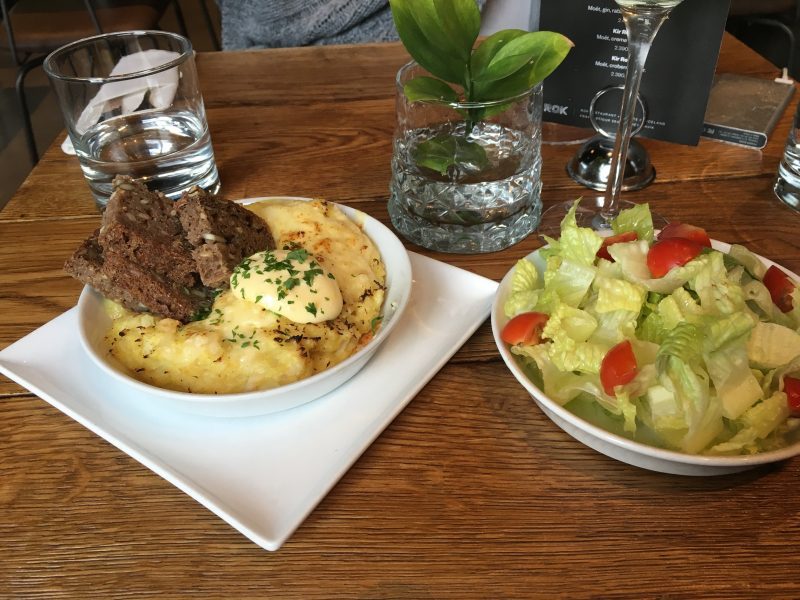 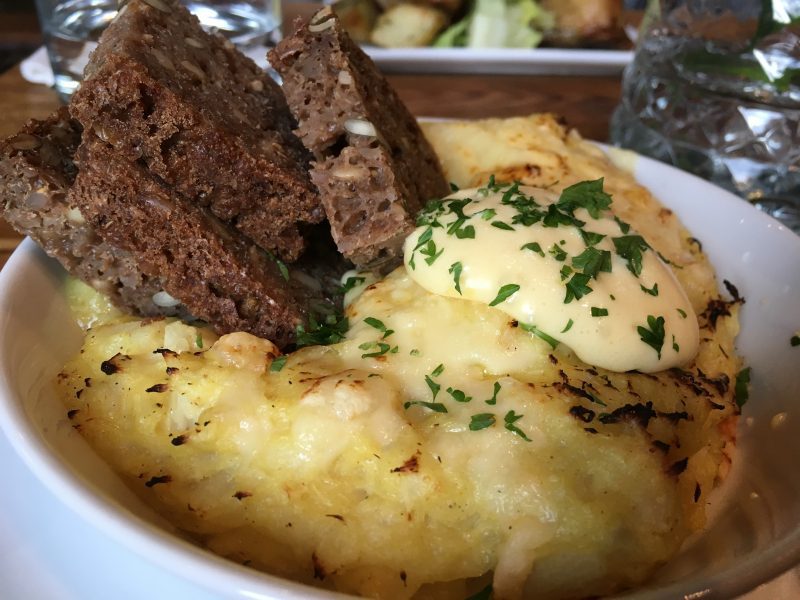 Fish pie or Plokkfiskur (pronounced flock-fees-cure, according to our lovely waitress who gave us an Icelandic pronunciation lesson) is white fish, onion, potato, cheese and hollandaise sauce served with rye bread. Why they call it pie, when there is no crust, I don't know. It is just a tasty pile of fish moosh on a plate. It was an enjoyable lunch, and after it was time to complete the mission and watch an off-venue show at Kex Hostel, KEXP's location of live-broadcast. 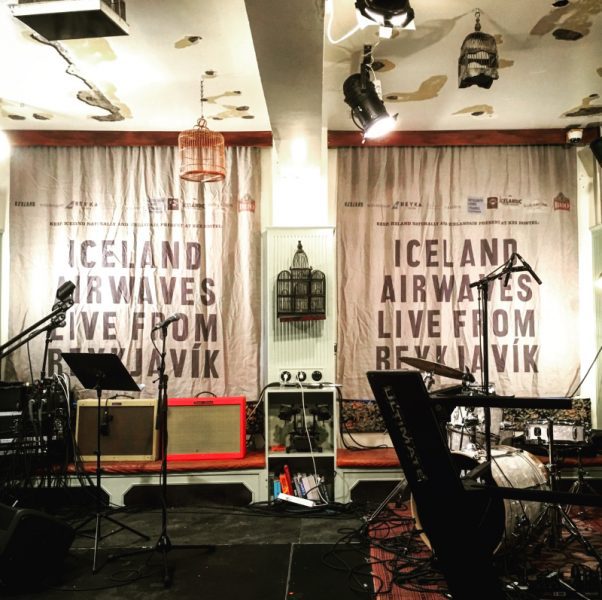 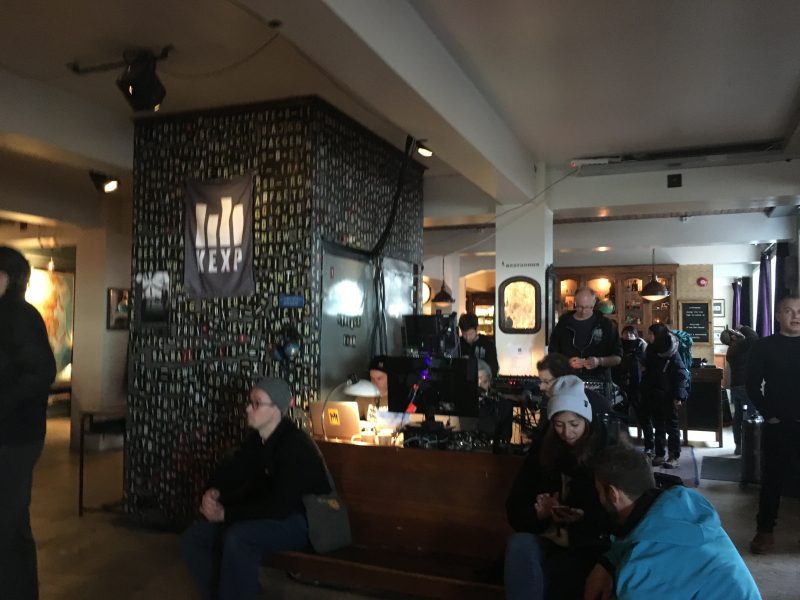 When we got there we missed the 13:00 show, the venue was clearing out and my traveling buddy dropped her iPhone in the toilet. Oops. 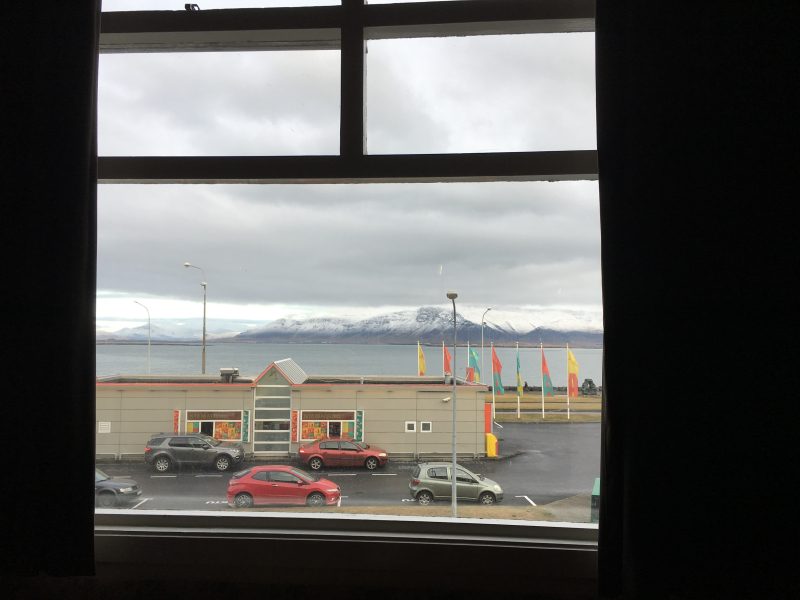 Luckily, the sun was still shining and the clouds parted to reveal the mountains in the distance over the Icelandic drive-thru restaurant. We would come back in an hour or so after checking out some other shows up the street. 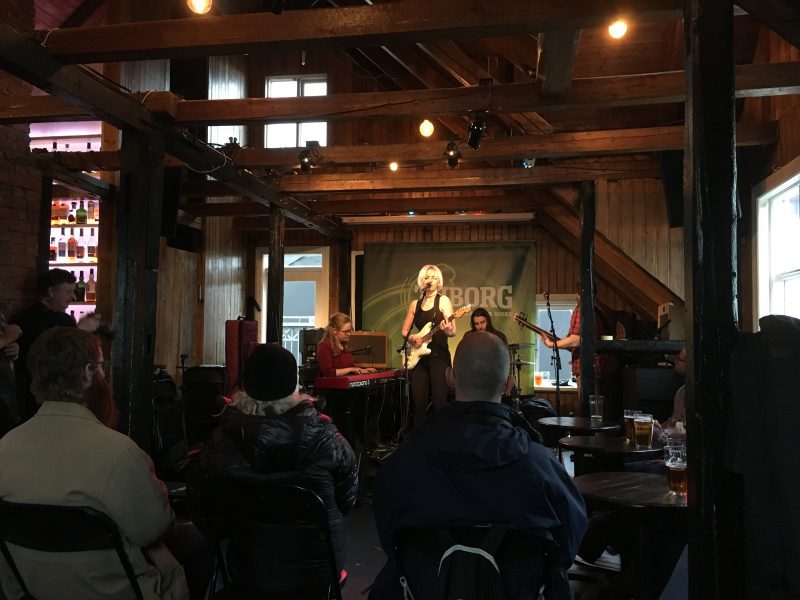 We found music in a movie theater and music in an attic bar with a very questionable staircase. My friends iPhone did not come back to life and appeared to be fried. She handled it well. I was on a mission to witness music in the physical while KEXP was live broadcasting so we returned to Kex Hostel. 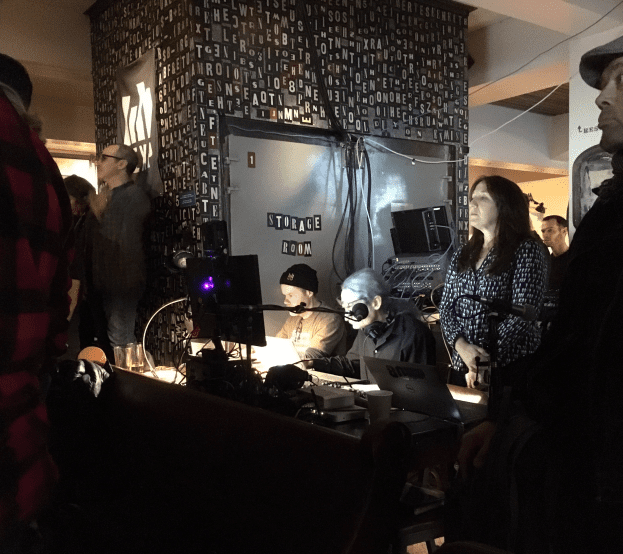 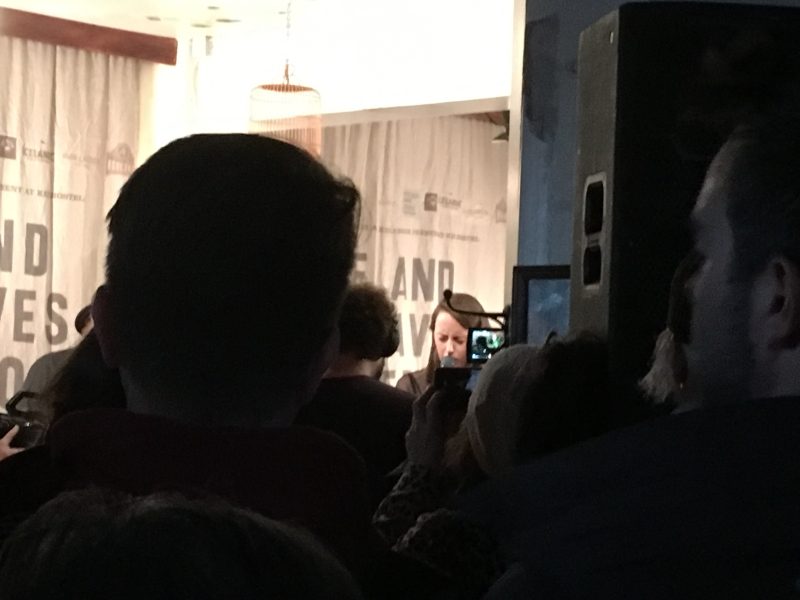 We caught a live show of an Austalian artist named Gordi, but I was not able to capture any epic concert footage. Alas, I tried but I'm short and the angles are all funny in the space. It was enough to be present and experience with multiple senses something I had only heard on the radio before. 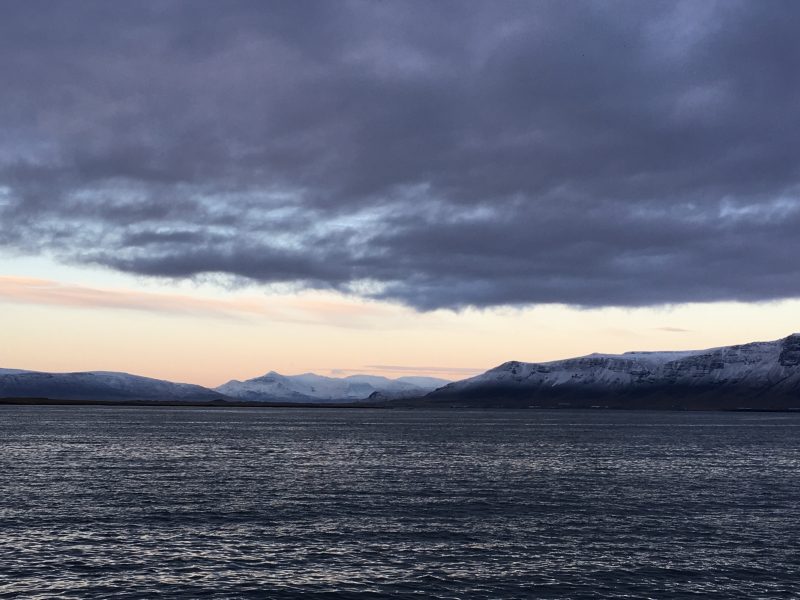 At a ripe 16:30 the sun was starting to set. I took this moment to attempt to get some artistic photos of the Arctic Ocean and the landmarks of Reykjavik – like the Sun Voyager and Harpa. 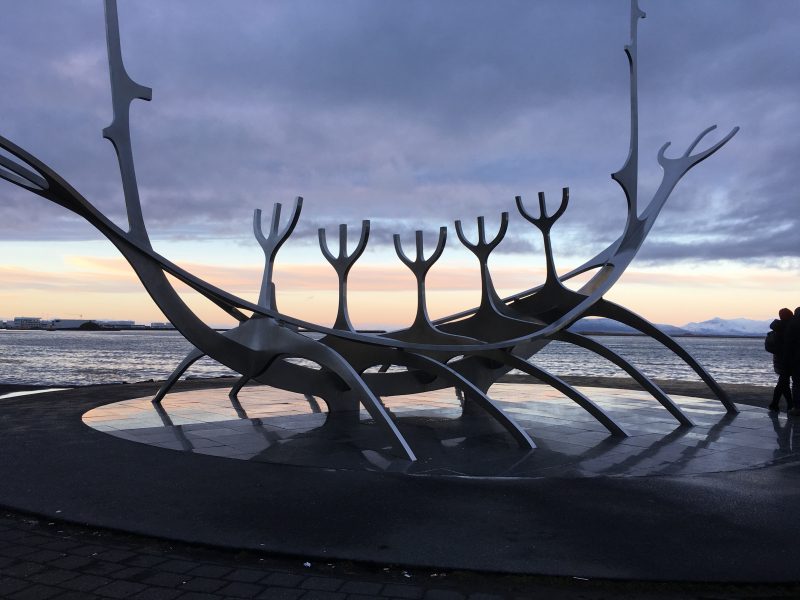 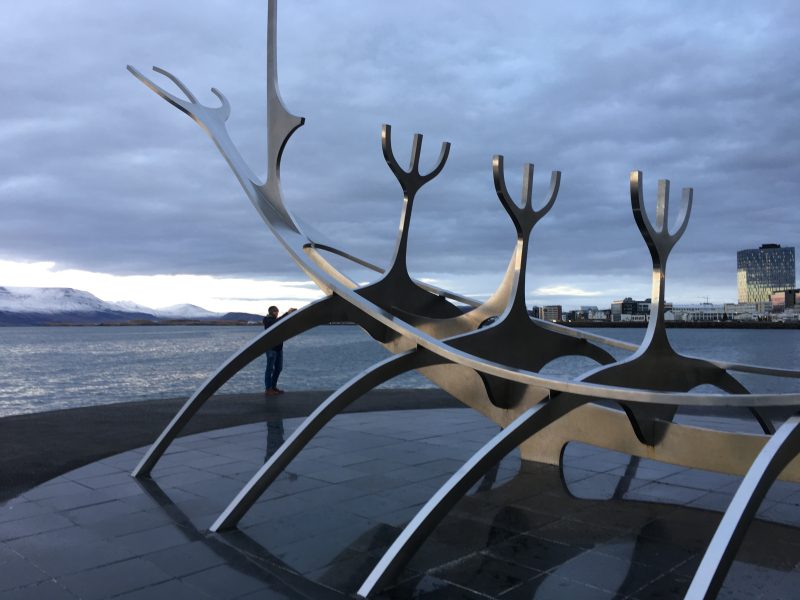 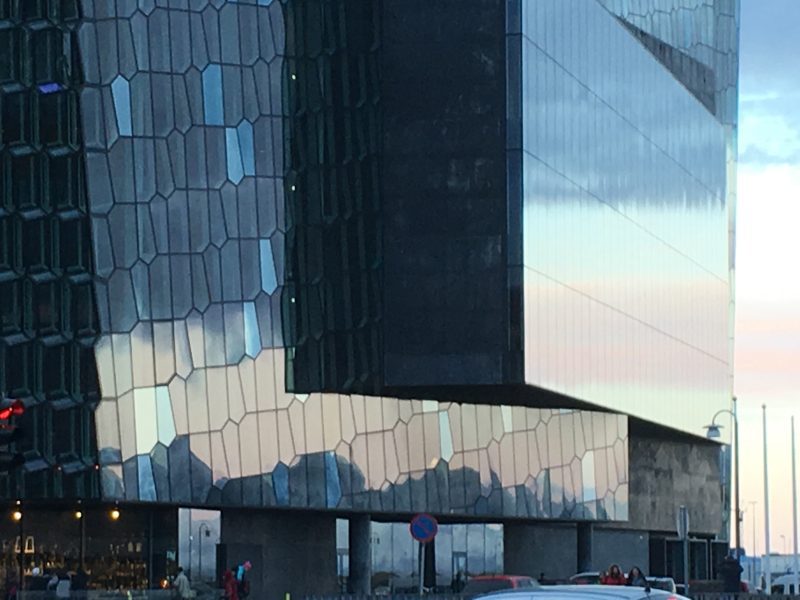 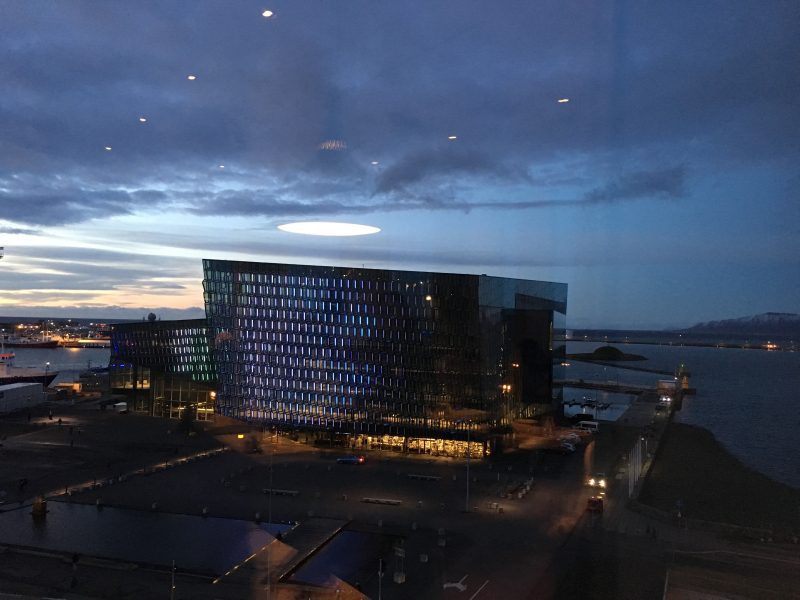 There is nothing I could do to make the cranes look good. 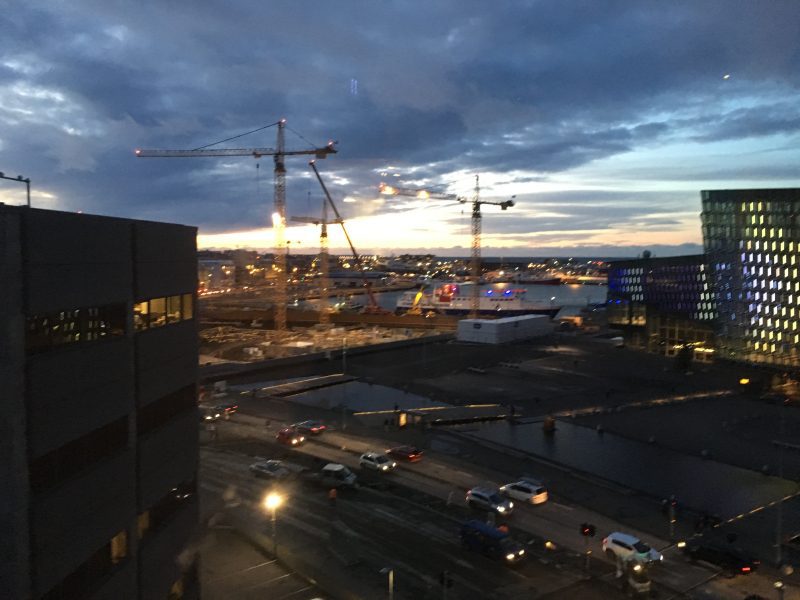 It was getting late so I gave up my artistic endeavor to prep for the night of concerts ahead and finding dinner. 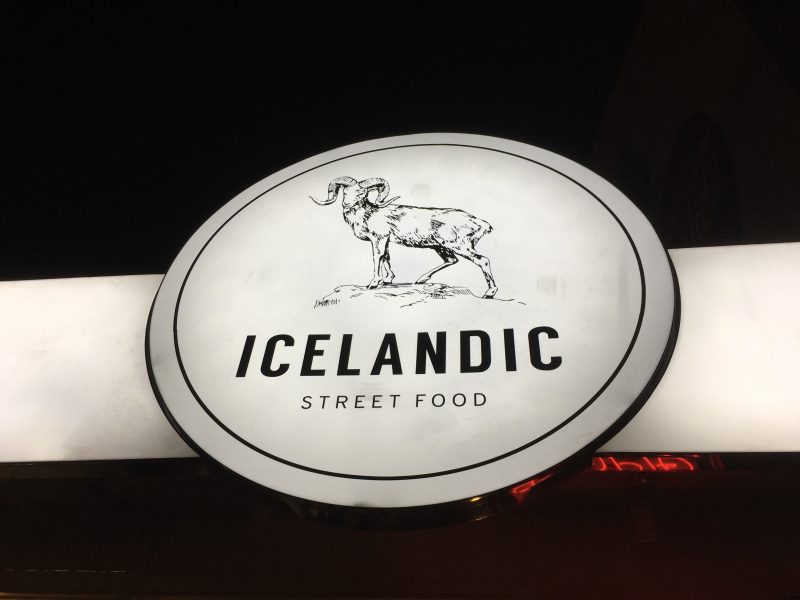 After much ado reading multiple menus with expensive and large offerings we found the perfect thing – soup! at an establishment calling itself Icelandic Street Food. 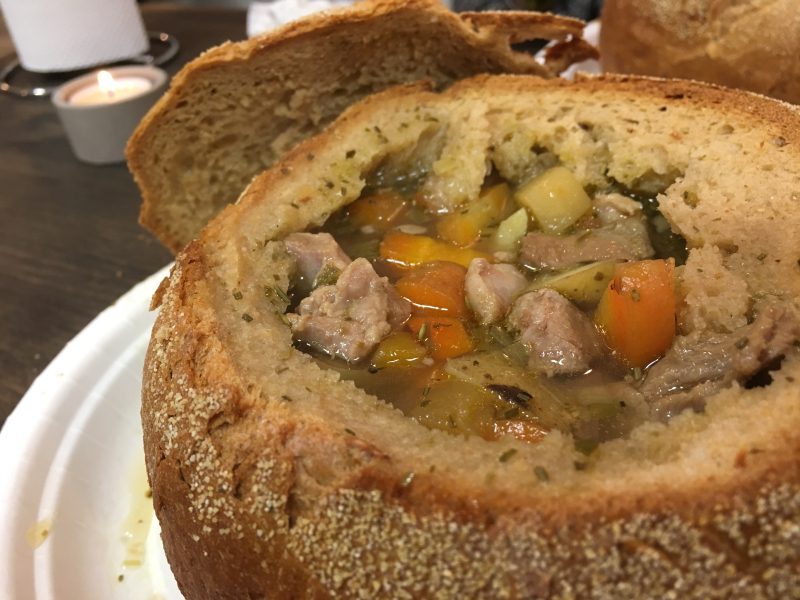 My lamb soup was officially the bomb – lamby and rich, the tender chunks of meat and vegetables melted in my mouth with the herbacious broth. It was warming and filling and perfect to get through most of the night ahead. 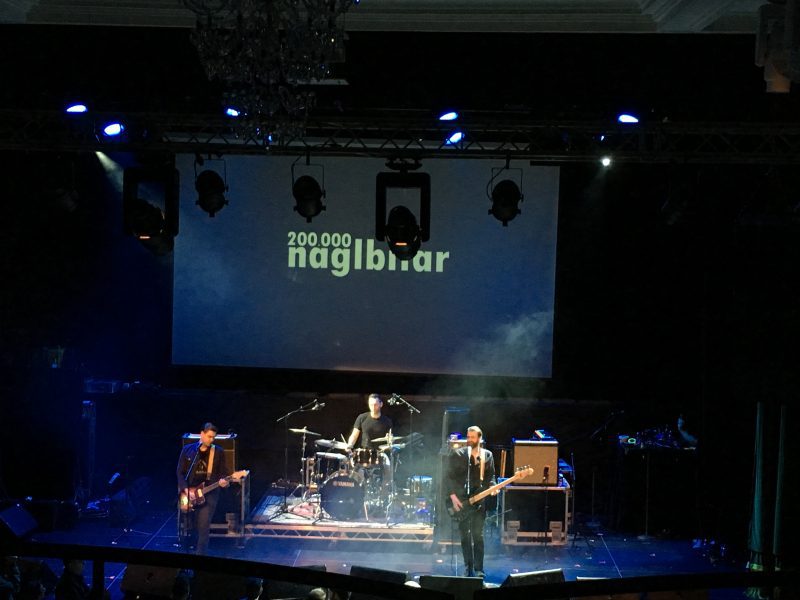 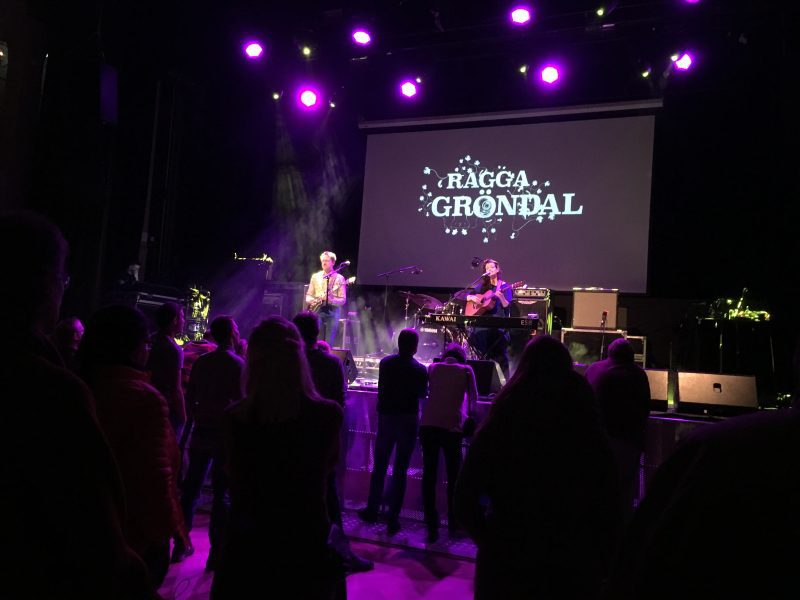 For a final treat after a slew of all Icelandic bands singing in Icelandic in different styles we ran to the Frikirkjan (free church) to catch Billy Bragg on the pulpit. 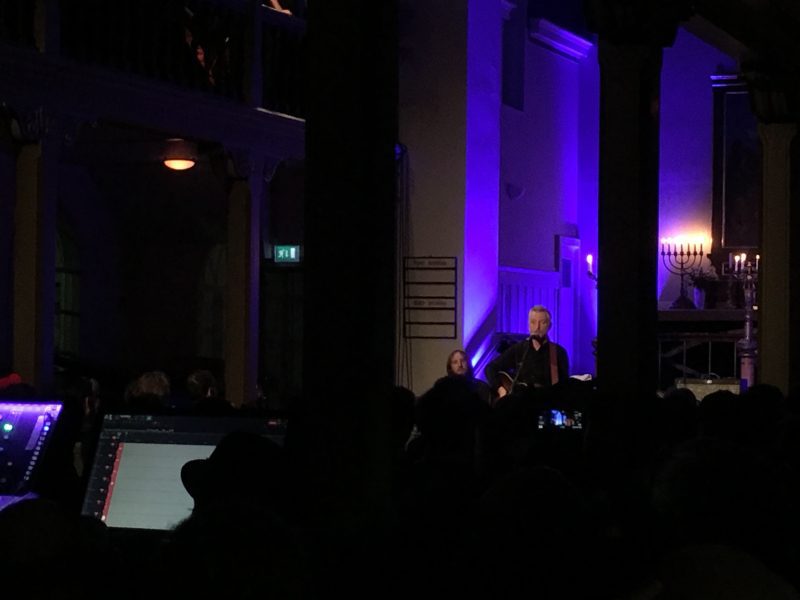 He sang about global warming and how we should be nice to one another and the power of unity.  It was nice and after a little over an hour it all started to sound the same both message and melody wise so we decided it was time to leave the sermon and let someone else have our spot standing in the back. It was a nice surprise to get to see a legend so up close and personal – and in a church none-the-less. 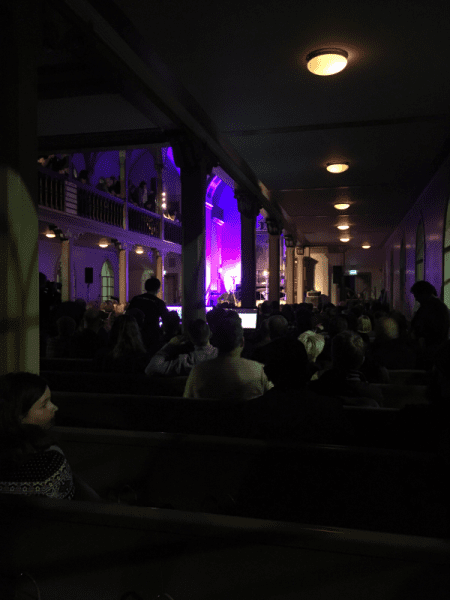 We shivered our way home through the now very cold streets of Reykjavik filled with revelers celebrating the release of the Christmas beer and late night Iceland Airwaves off-venues.