In my purse for about the last 30 days was the November issue of Bon Appetit.  The barrage of holiday recipes couldn't be contained within its pages alone.  I had to cook a turkey, and in the end I had to cook two turkeys.  The first you read in my previous posts – the second was the Tandoori Turkey.  Who could resist such a new way of cooking turkey?  This was not brining, or glazing, or deep frying it was a marinade of garam and tandoori masalas baked in a mythical roasting bag until perfection. 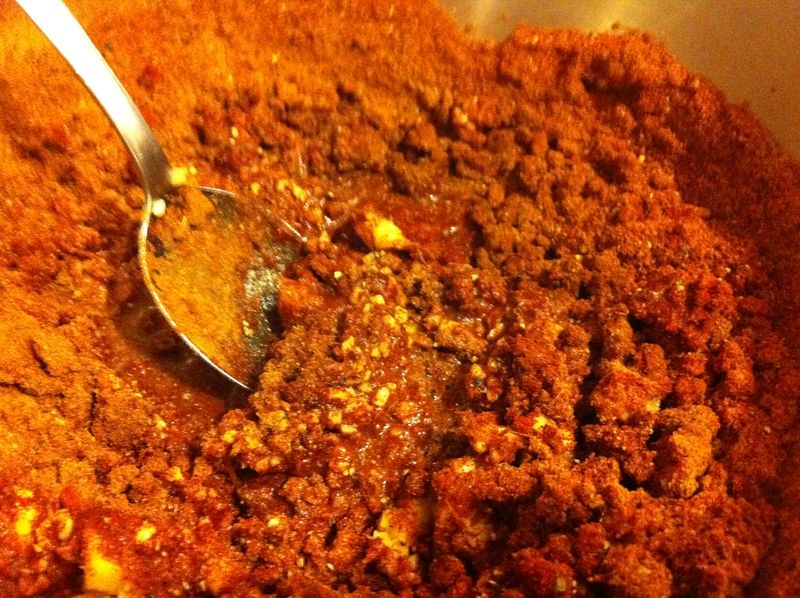 Luckily, my Burning Man camp has a tradition of gathering around Thanksgiving to have a second Turkey Day together  – so I offered to host said gathering this year with the alterior motive of feeding them my Tandoori Turkey. 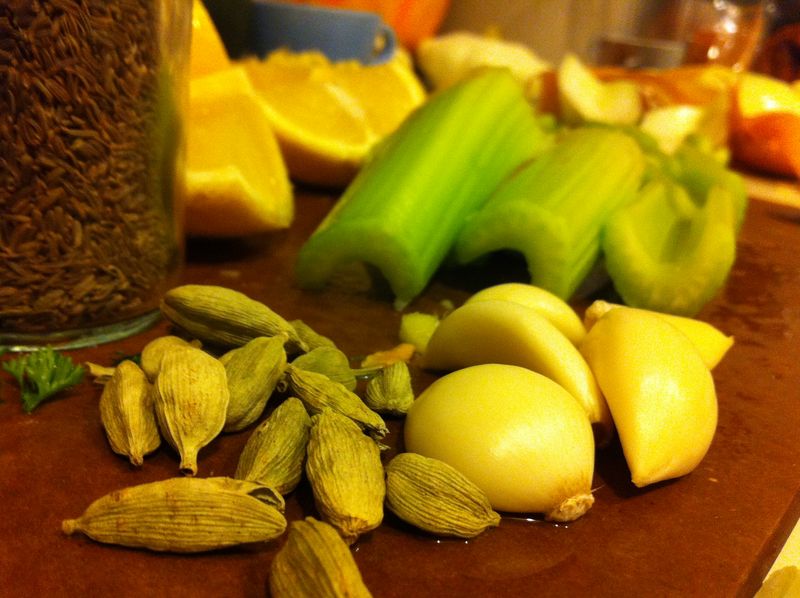 I chose a free-range turkey from my local grocery store.  I, for some unknown reason did not purchase the bird the weekend before but waited until a monsoon Tuesday evening after work.  I walked into the grocery store greeted by hundreds of holiday glazed eyed shoppers pushing wet shopping carts. 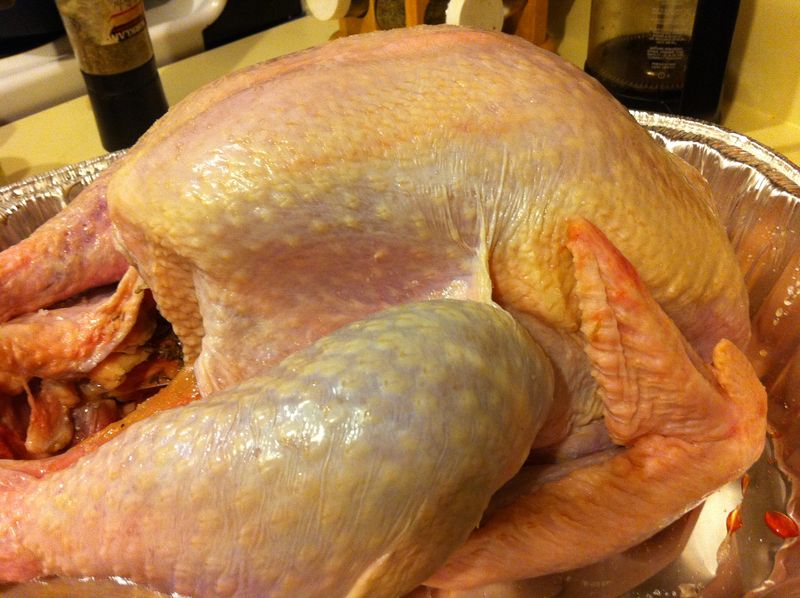 I gritted my teeth into a smile and breathed in holiday spirit until it was sincere and dived into my own shopping.  I pulled a lovely 14 lb free range turkey from the fray and a box of New Zealand Savignon Blanc highly recommended by the wine buyer who say me poking it as if it would speak up and tell me that it tasted good enough for a party. 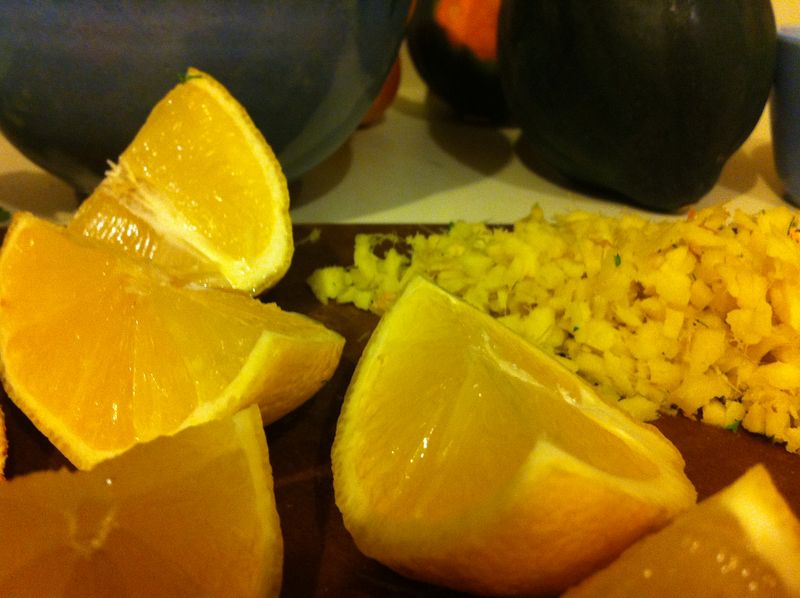 Here is the turkey after marinade and roasting bag. 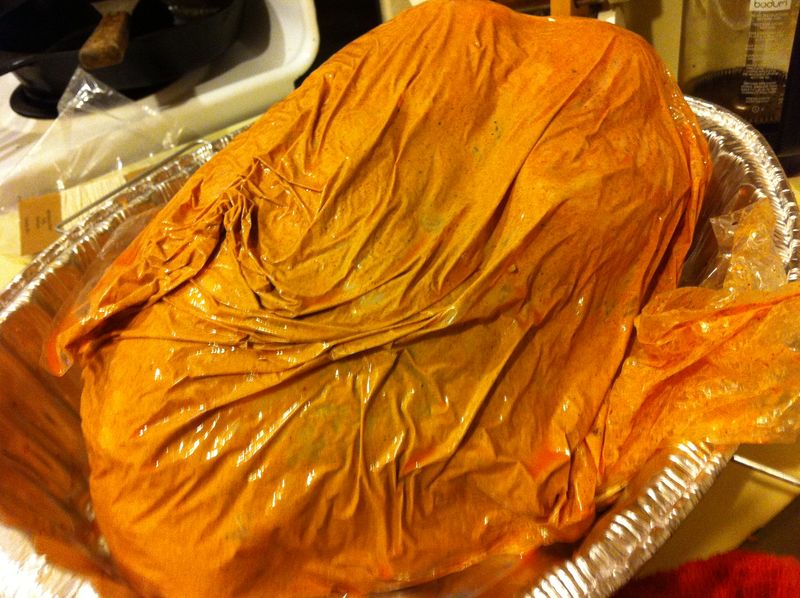 Not really a pretty picture – it didn't get much prettier after baking either so I have no more photos of the bird – but I do have many memories of a fun night with close friends eating, drinking, being merry, playing charades.

Note:  The original recipe called for making of Garmam Masala and TanDoori Masala from freshly roasted spices.  I skipped this step and opted for pre-mixed.  It cut down on preparation but likely also flavor.

Step one:  Prepare the turkey.  Wash, dry and rub with salt.  Put the onion, cardamom, cumin seeds, celery, and lemon inside of the bird.

Step two: Prepare the marinade.  Mix all of the marinade ingredients together until blended and smooth.

Step three: Place the turkey in a roasting bag.  (A roasting bag can be precured at any local supermarket in the same section as tin foil and plastic wrap).  Pour the marinade in the bag and make sure the entire turkey is covered. Turn the turkey breast side down and place in a roasting pan and refrigerate overnight.

Step four: The next day take the turkey out of the fridge at least one hour before baking.  Pre-heat the oven to 400 degrees.

Step five:  Bake the turkey.  Make sure that your oven racks are arranged in such a way as the roasting bag will not come in contact with the oven and melt.  Flip the turkey breast side up (keeping it in the bag) and place in the oven.  Bake at 400 degrees for 30 minutes then turn down the heat and bake at 350 degrees for at least another 1.5 hours.  At 2 hours (depending on the size of your turkey) check its temperature by placing a meat thermometer in the thigh.  It is done when the thigh reads 165 degrees – which could be 30 minutes to an hour longer.

Aside: The original recipe called for turkey to be taken out of the roasting bag for the last 30 minutes to brown.  However, as soon as I did this the turkey started to dry out.  I would recommend you leaving it in the bag until completely done – sacrificing the pleasing color of a browned bird but keeping the juices in the breast for a succulent turkey.