Until Friday December 18, 2015 I never made a lasagna with noodles before in my life.  I made a number of zucchini lasagnas in my time so I figured noodles cannot be that different. 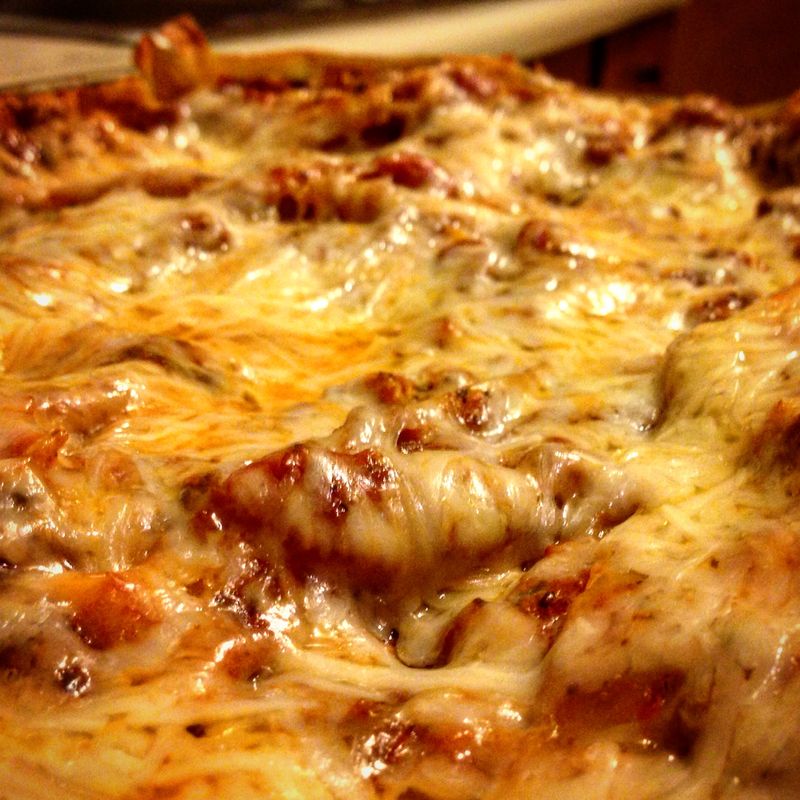 With a major exception (otherwise known as lasagna noodles), I was roughly correct.  When I put the lasagna in the oven, I thought I might entitle this post, "how not to make lasagna"  but it actually turned out and was quite tasty. 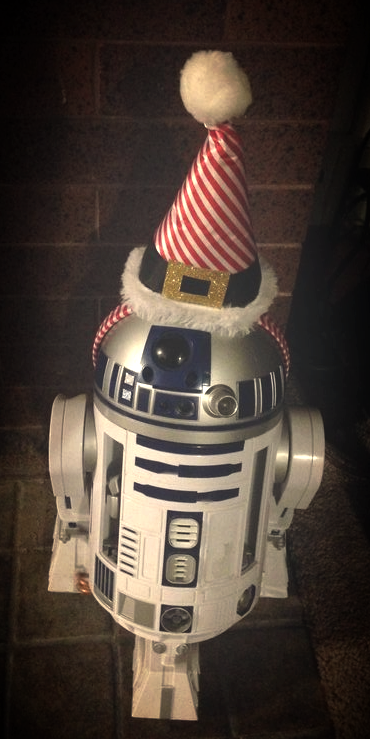 First of all, it was Star Wars day (the release of The Force Awakens, to be more accurate) – and I wanted to make something special for dinner to keep my mind off the fact that I wasn't seeing the movie on opening day. Second, I had a package of organic pork sausage that I thawed earlier in the week that needed to be used. Third, I had a fresh produce delivery from Full Circle Farms begging to be used.  A perfect set of circumstances for recipe experimentation. 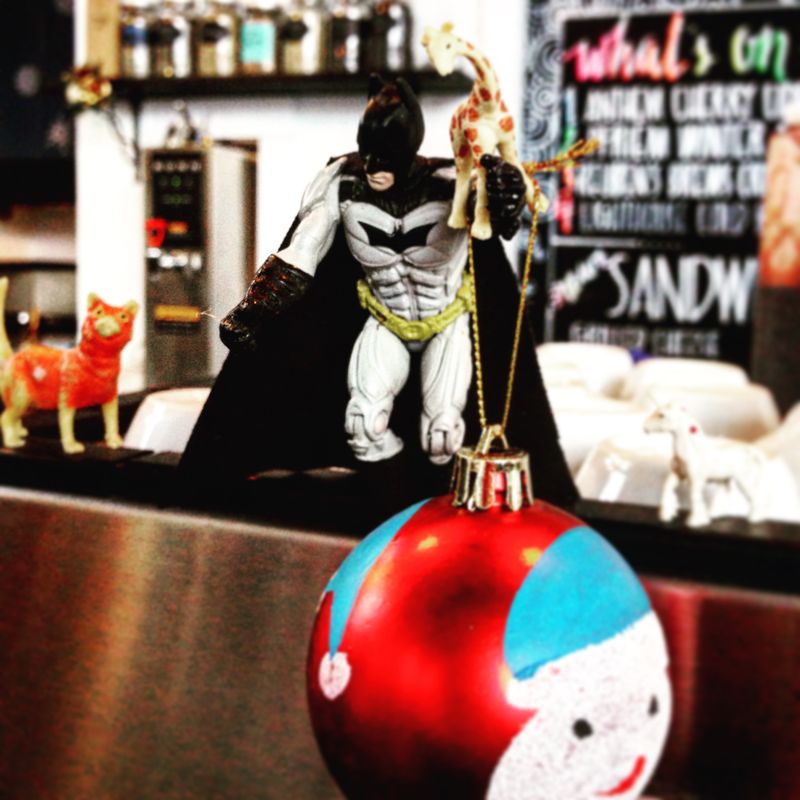 Lasagna has three elements 1. some type of sauce 2. a meat and vegetable mixture of some kind; and 3. noodles.  In order to have maximum flavor I started by making the tomato sauce and the meat/vegetable mixture so their flavors could reach maximum melding. 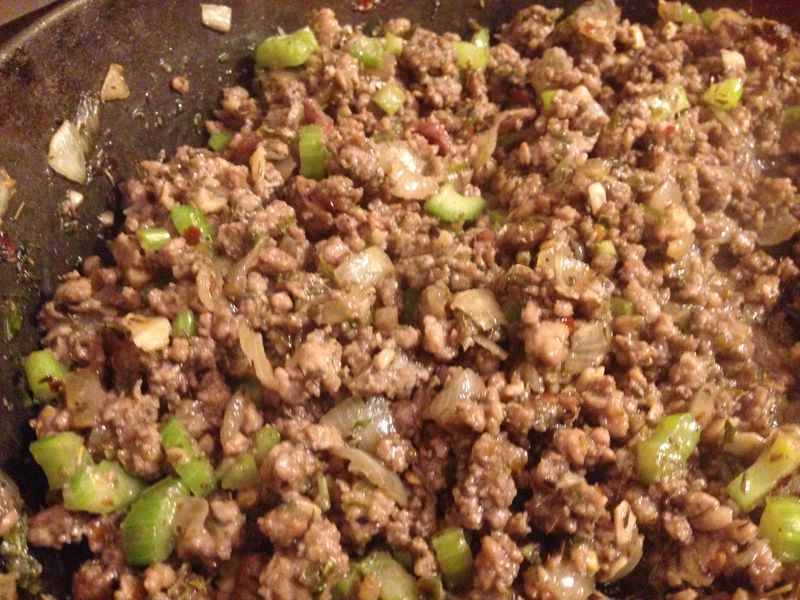 In the pork sausage went chopped onions, roasted garlic, red wine, dried red pepper, italian seasoning salt, celery and fresh parsley, sage, oregano (dried and fresh), majoram and thyme.  In other words, throw in your whole herb garden with a little bit of dried oregano to supplement.  I sauted everything in a little bit of butter and peppered bacon bits. 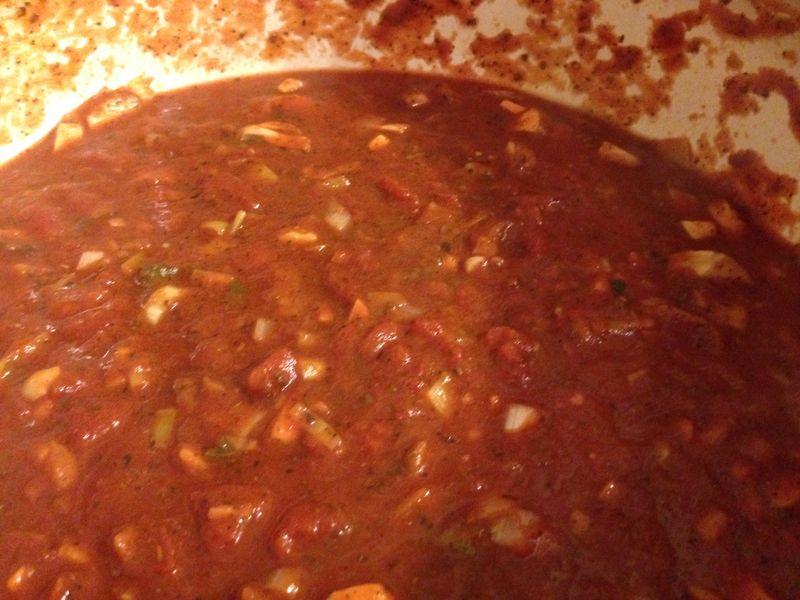 The red sauce started with finely chopped leeks, fresh garlic, more red wine, diced tomatoes and tomato sauce, italian seasoning sea salt, finely chopped mushrooms, and the same assortment of fresh herbs supplemented with a couple heaping tablespoons of dried basil.   Both the meat and the tomatoes sauted for about 45 minutes so the flavors of everything could hangout together right proper and make awesome flavor. 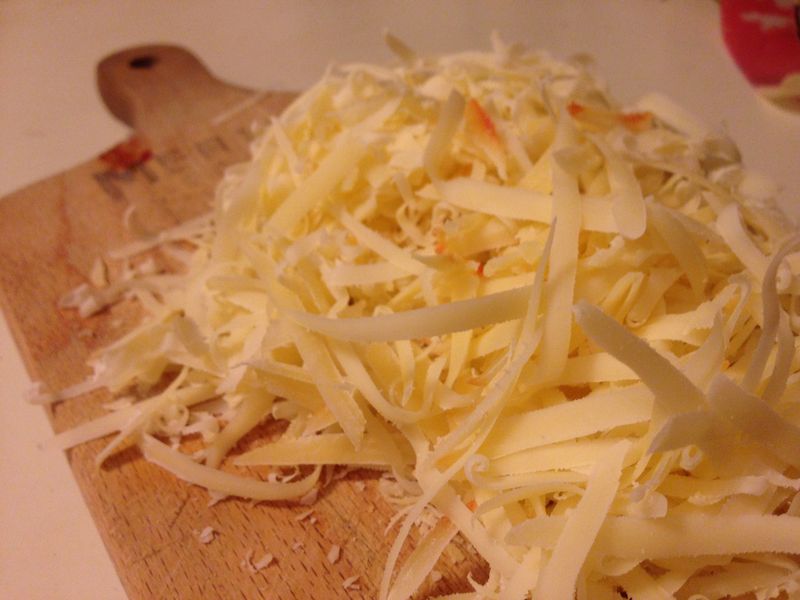 I grated an aged gouda cheese as well as a parmesan for the lasagna layering.  Then I started on the noodles.  Thank goodness I started the noodles last because my lasagna noodle skills are lacking considerably. It was only the saving grace of timing that kept the whole lasagna from being a complete debacle/disaster/failure. 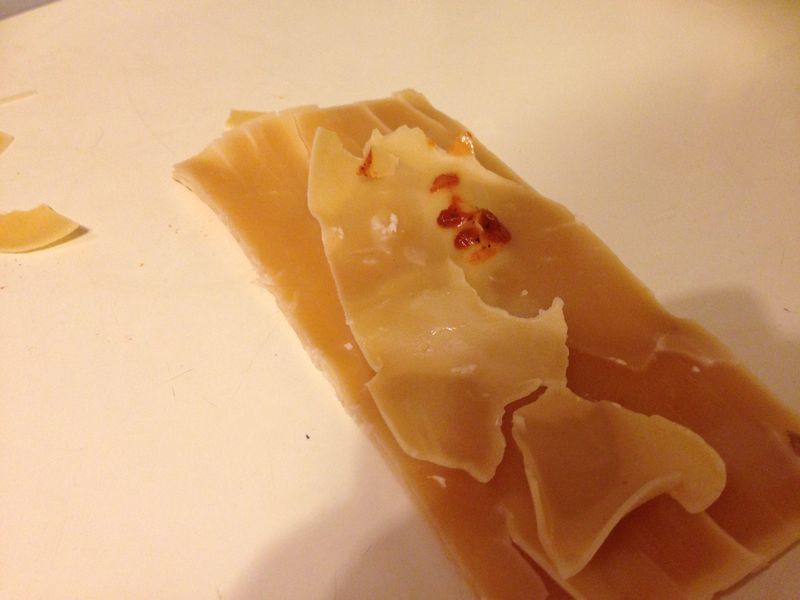 I have no pretty photos of the noodles or the layering process because it was a complete emergency situation.  You should be able to discern from above, the emergency I created was the result of my dumping all of the lasagna noodles into the pot of boiling water at the same time.  As soon as I did it I knew this was very dumb. All of the flat square noodles were going to immediately stick together. I immediately screamed "shit! shit! shit!" then grabbed a tongs and removed over half of the noodles in one swoop, setting them on the clean counter in a pile as I turned back to the boiling water and tried to seperate the noodles still floating inside.  Then I spent more time seperating the noodles manually and flinging them upon whatever clean surface I could find so they did not cement together in their just oh so lightly cooked state.  Then I realized the pile of just wettened noodles on the counter that I removed from the water initially were now completely cemented together.  I boiled them like that in the hope that maybe, just maybe, if they got a little more soft and cooked I could pull them apart.  I pulled them apart, sort of, but it was not pretty.  Luckily, I salvaged enough noodles to build a lasagna and cover the ugly noodles with a beautiful thick layer of cheese. Lesson learned, prepare your space and cook lasagna noodles very lightly two or three at a time in a large pot – then lay them out in a single layer on a clean surface and immediately assemble the lasagna. 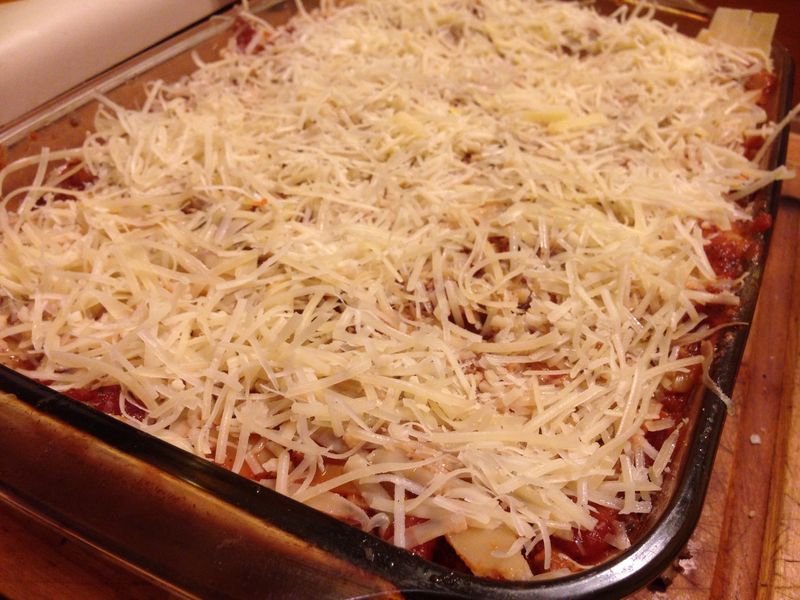 When I finally got the noodles and meat and sauce and cheese all layered together in the perfect pattern it was time to bake everything for about 40 minutes.  The baking smelled like heaven taking all the stress of the prior noodle fiasco away with it. 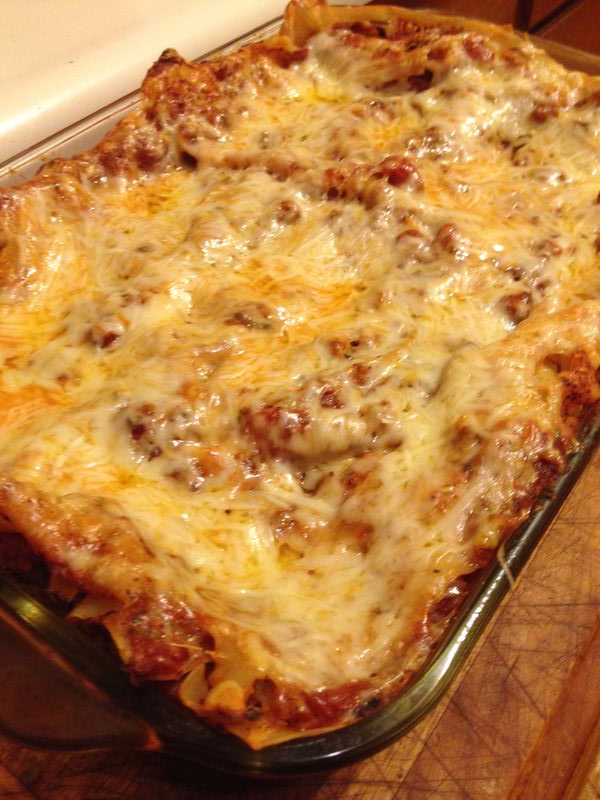 And then this gorgeous lasagna emerged from the oven. 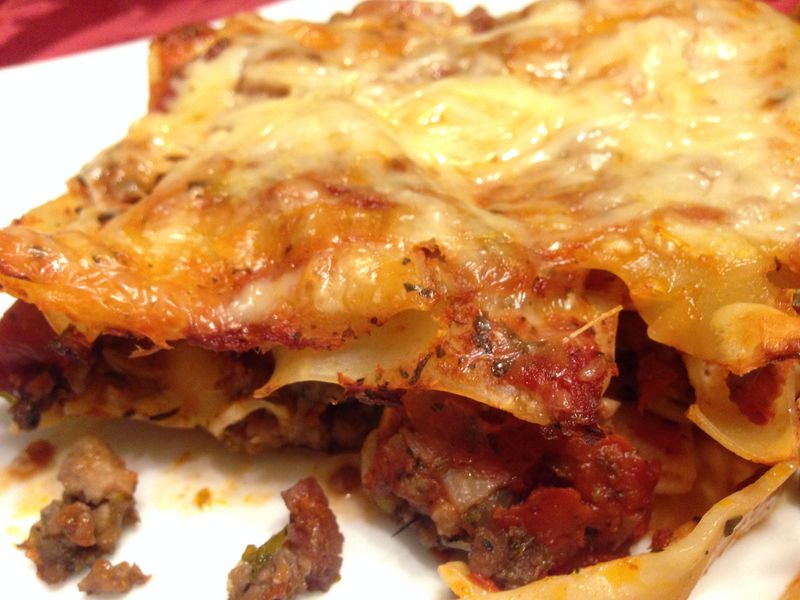 Paprika Angel's Lasagna (do not be frightened by this list of ingredients, ingredients = flavor and you won't regret it)

Step 1: Finely chop the 2 bacon slices and put into a fry pan with 1 tablespoon of butter on medium.  Cook until both fats melt then add the finely chopped onions, celery, roasted garlic and 1 tsp italian seasoning sea salt.

Step 2:  When the onions are soft add the pork sausage, dried oregano, 1 tsp plain sea salt, 1 tsp fresh black pepper, and half of the chopped fresh herbs.  Cook everything together on just under medium heat for about 5 minutes, then add 1/4 cup red wine a mix everything again making sure to scrape the fatty bits off the bottom of the pan and back into the meat and vegetable mixture. Cook everything on medium low heat for at least another 30 minutes – add a little more wine if all the liquid evaporates.

Step 3: In a seperate sauce pan place 1 tbsp of butter and 1 tbsp olive oil, cook both on medium heat until the butter sizzles then add the finely chopped leek, raw garlic and italian seasoning sea salt.  Cook the leek until it is slightly soft then add the chopped mushrooms and stir everything together really well.

Step 4: Add all of the tomatoes to the sauce pan with the leek mixture, follow them with the remaining 1/4 cup of red wine and fresh herbs and the last teaspoon of plain sea salt.  Mix everything together then cover and let cook on medium low for at least 30 minutes stirring occasionally.

Step 5: After the tomato sauce and meat have cooked for a least 30 minutes it is time to start the lasagna noodles.  Before you start cookig the noodles prepare a space to lay the noodles in a single layer after you have lightly cooked them.  You do not want to stack the noodles on top of each other as they will stick together and cause havoc.  You also want to cook only two or three noodles at a time or else they will stick together in the water.  Cook just two or three at a time for just two minutes each so they are only lightly cooked.  If you cook the noodles all the way through they will turn to mush in the lasagna when you bake it.  So in short, be prepared and ready with a tongs and a space to layout the noodles or else you could have a disaster on your hands.

Step 6: After all of the noodles are cooked it is time to create the lasagna.  You want at least an 8 x 12 baking pan for this recipe.  Start by placing a single layer of noodles on the bottom of the pan, cover the noodles with a layer of the meat mixture then follow it with a heaping layer of tomato sauce and a thin layer of cheese.  You should have enough meat, cheese and tomato sauce to make about three layers.

Step 8: Bake the lasanga for about 40 minutes at 350 degrees.  Cook it covered with tin foil for at least the first 15 minutes so you do not over brown the cheese.  Take the tinfoil off for the final 15 minutes so the cheese gets a nice healthy brown and golden glow.

Step 9: Take out of the oven when all the juices are bubbling and cheese is lightly golden.  Let it sit for at least 10 minutes then cut and serve with salad as a side dish.