My direct flight from Seattle to London Heathrow airport took off at 7pm last night and landed at 1pm/13:00 London time. On the nine hours of flight I managed some fitfull neck injuring rest, as I had full day ahead of me before I could "check-in" with my airbnb hosts. 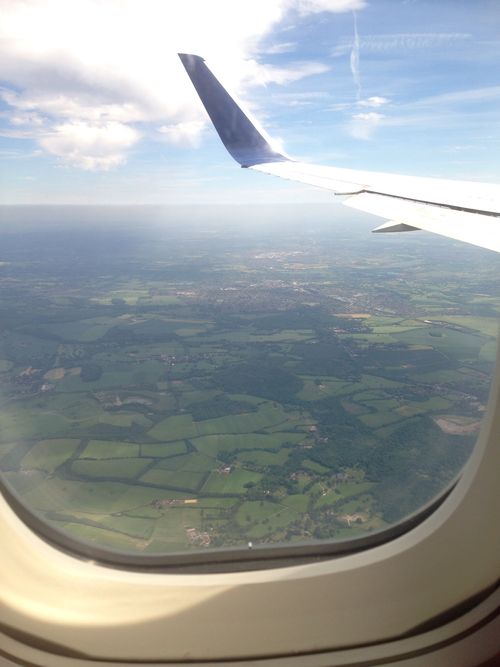 Things I immediately liked about London before leaving the airport.

1. My border guard was a red head and chatty

2. The airport bathroom was clean

4. Efficiency in the customs process 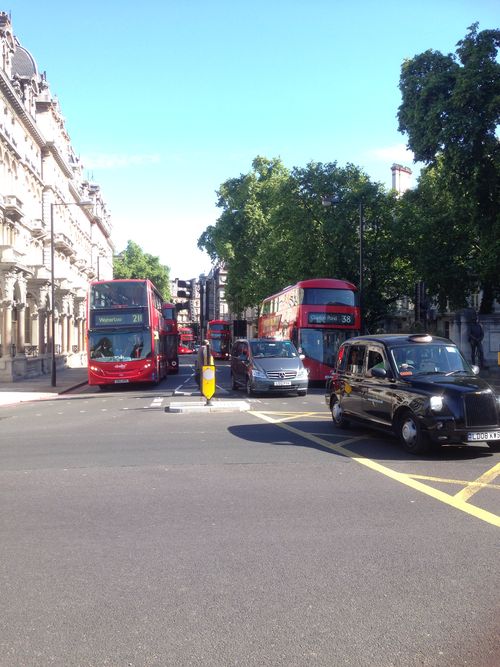 Things I learned after leaving the airport.

1. The tube has no air conditioning

2. It can be hot and sunny and beautiful

3. There is a lot of traffic, both foot and car (though very few individual vehicles) 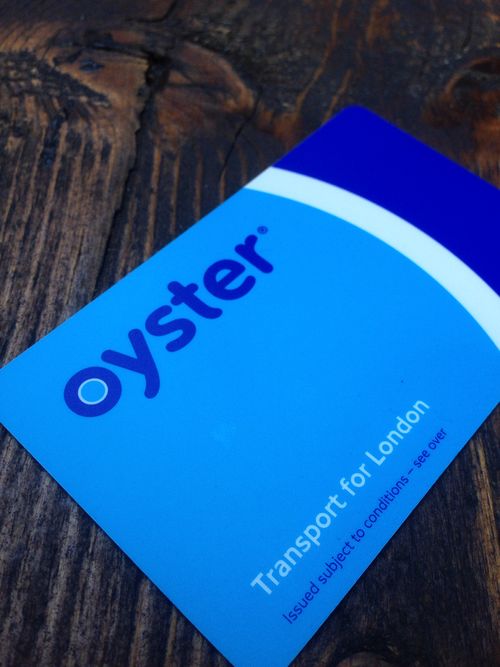 I purchased a week long travel pass with an Oyster card and it was double the cost stated by Rick Steve's in his 2015 travel guide but cheaper than two cab rides to the airport – so I am going to milk it and find every reason to ride London public transport. I used it 7 times today in a span of less than 8 hours. Meanwhile, I successfully stored my luggage for 8 hours for 4£. Tip – if ever in London and you have to check out or can't check in the Victoria Coach Station (i.e the bus station conveniently located by the Victoria underground station near Buckingham Palace) can store them for 3-24 hours for that 4£ rate. 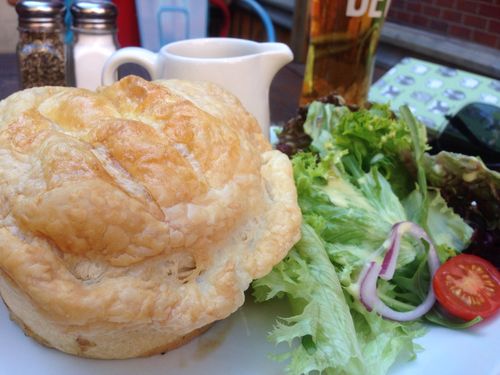 My luggage safely stored, it was time to get some real British Pub food into my stomach to counteract the plane food.

Looking for something realatively easy and in the area I chose a Rick Steve's recommended destination the Jugged Hare – it did not disappoint – it as exactly what I expected. Meat pie and a salad. 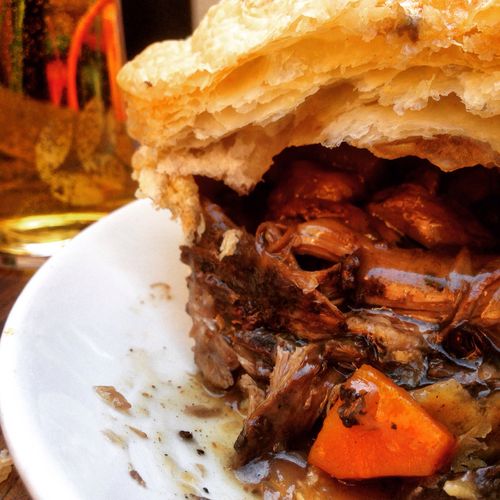 The texture of the meat pie was very curious though, as the top crust was thick and puffy, and super easy to cut through – and the bottom crust was full-on strong crust holding the shape of the pie and resisting my fork. As I ate I eavesdropped on the conversations going on around me as I sipped my summer lager, and watched the London Summer pop music videos on the courtyard telly. I found, sadly, one of the girls at the table near me puking in the sink of the loo right before I left. Londoners are serious about their happy hour – check out the crowd at the Black Friar. It fills the entire green space next to the building. 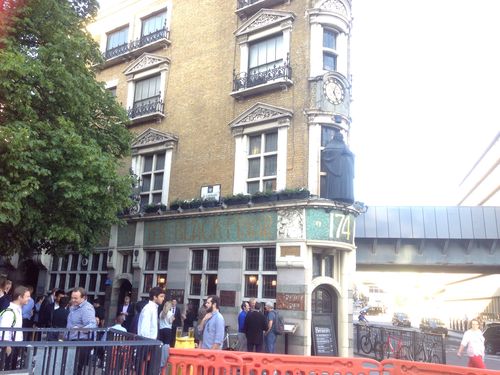 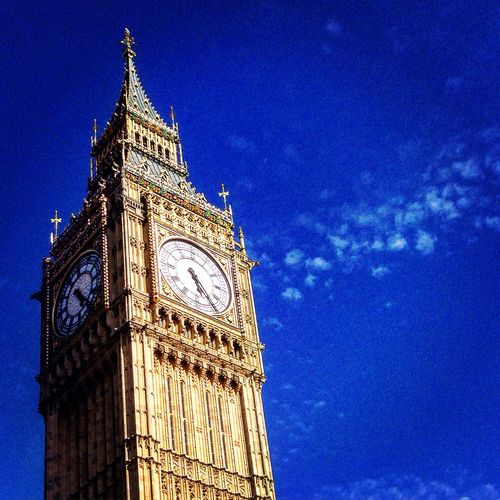 I unsuccessfully visited Parliment, Buckingham Palace and Wesminster Abbey – as the visiting hours were over for all of them by the time I got there. 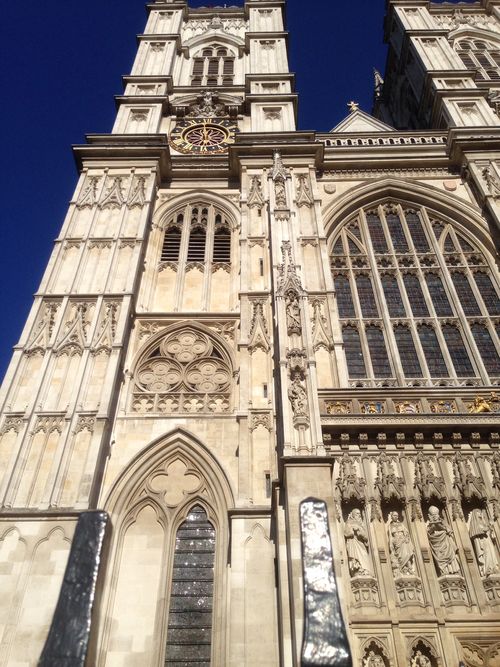 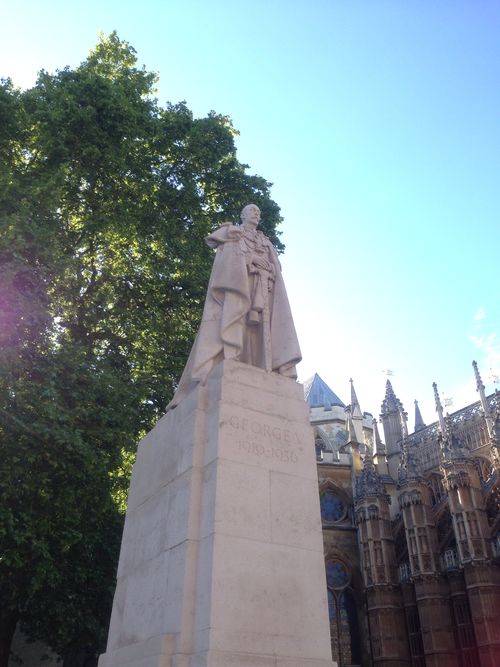 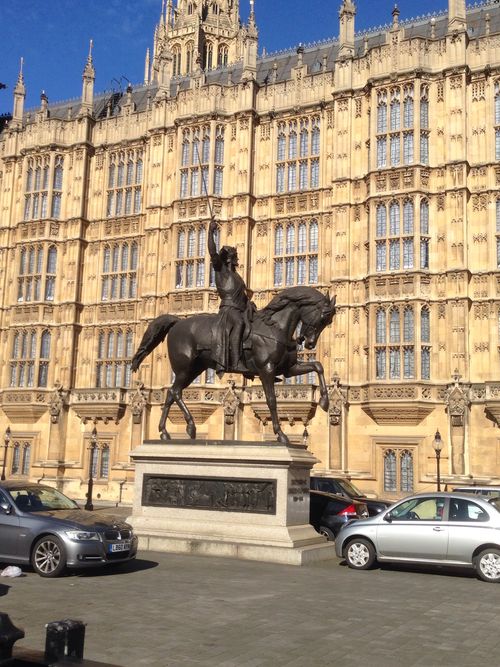 I did successfully take a bunch of pictures of things I had to look up while I was having another beer at the oldest pub in London to know what they were. Turns out this guy on the horse was big in the crusades. 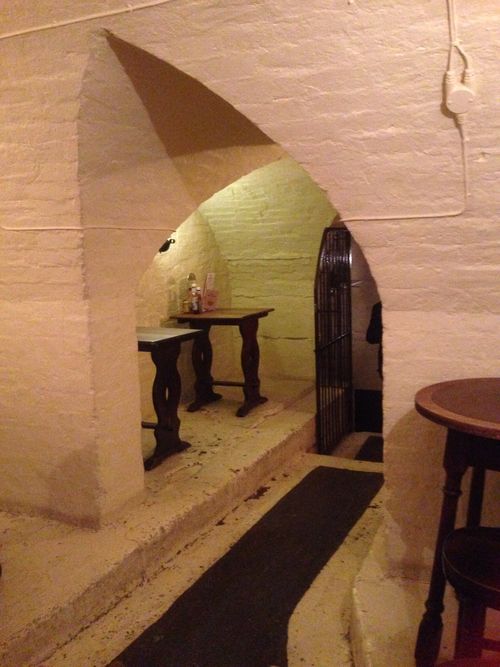 This is a view from the maze-like Ye Olde Cheshire Cheese – the oldest standing pub in London. 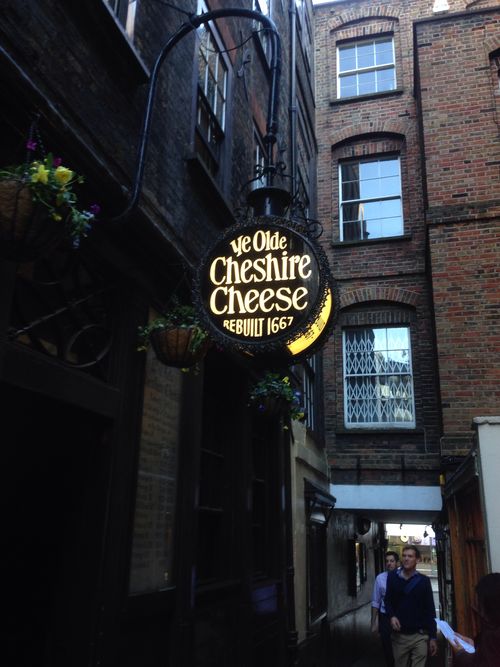 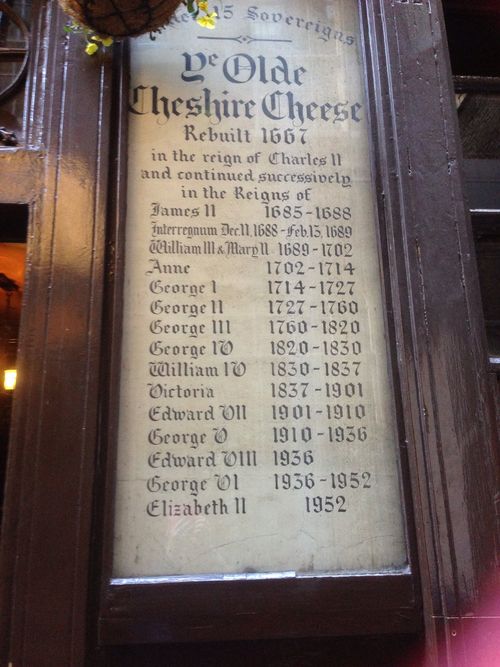 I ended my day by getting slightly lost trying to find the oldest restaurant in London – a place called Rules. When I found it I was not wearing something nice enough to walk past the door man in – so I'll have to go back. Instead I found another London institution J. Sheekey. 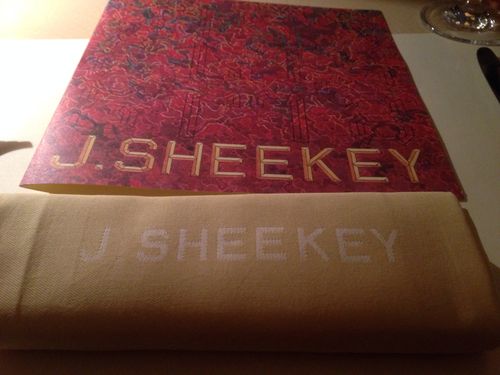 I almost left initially being on the edge of too much stimulation and fear that I wouldn't get my luggage out of hock in time, if I stayed. But then I saw the description of the soup and I was hooked. They had me at purple flowers on top of peas and sorrel. 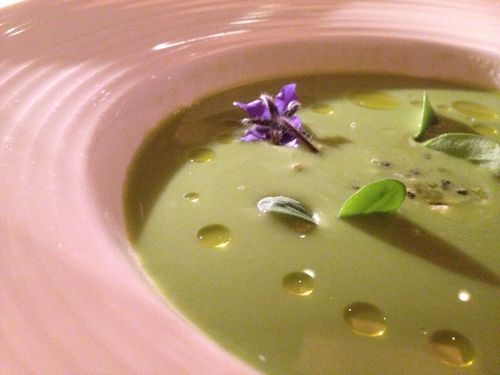 It was the tastiest cold soup I've ever had in my life. So smooth in texture with a bright spot of feta or a whole pea popping up here and there. 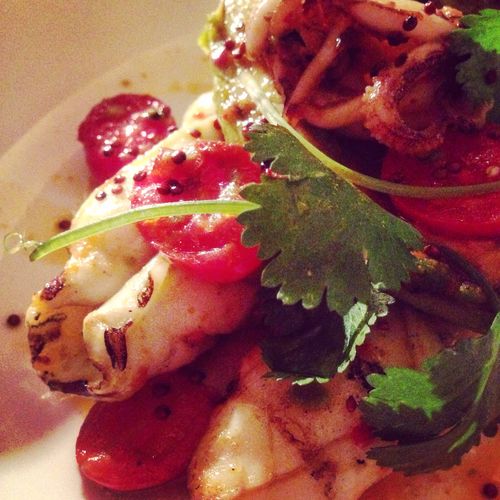 I followed it up with delicious grilled squid and avocado then reaching a point of uncomfortable fullness. Then my phone alerted me that I had only 10% battery life and I had yet to connect with my hosts. I also had no idea where the nearest tube station was. Through the help of another set of tourists and one very nice lady at my final destination I made it with my luggage to the rendezvous with my hosts. 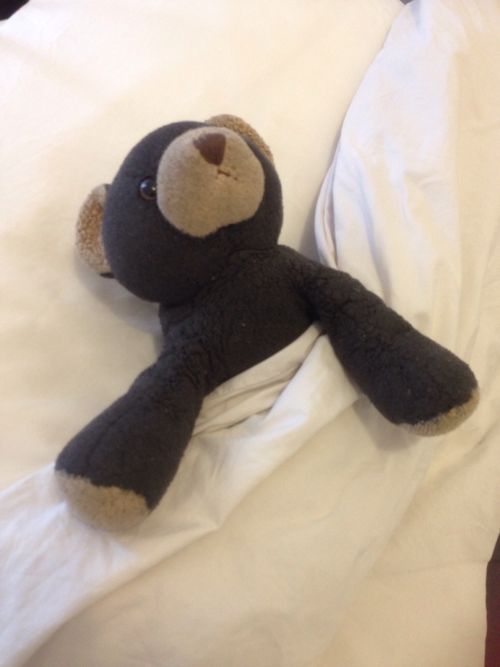 I was so ready for bed, and so was Jimbo.