On what was supposed to be a day of snorkeling and facing our fears to the reward of a menagerie of a seawater ecosystem displaying itself before us upon the Florida reef – we found ourselves instead walking through a forest of mangroves. At a little before noon, after a morning of nervously shuffling about in wait of our planned adventure, I received a call from our captain canceling the trip. We gladly accepted our fate, best not to force these things. 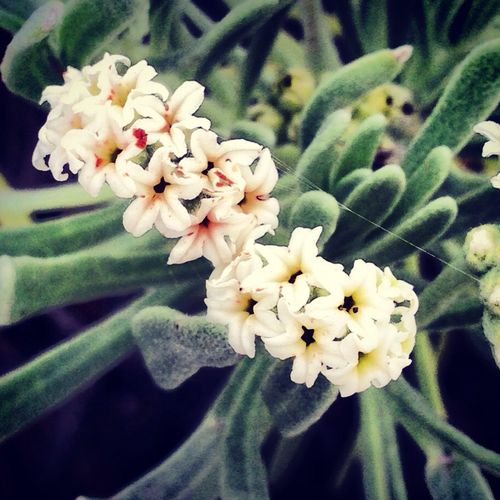 Instead we headed off to Crane Point Museum & Nature Center. A 63 acre property preserving what the Keys were before humans made it a vacation destination, cleared all the trees and developed resorts like the one we are staying in. 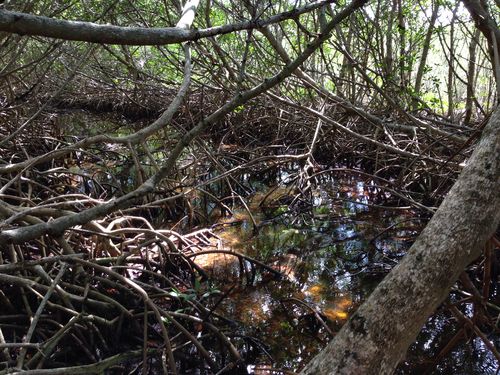 Once upon a time (roughly 1820) a man named Adderley sailed from the Bahamas and built a home on the land now known as Crane Point so he could harvest sponges and sell them at Key West (then the biggest city in Florida). Then came the railroad, then came a hurricane to knock down the railroad, then came the Overseas Highway, then came developers, then came…..tourists – and there went the ecosystem – except for a patch of land purchased by a couple well-to-do people from Massachusetts – the Cranes. Who just so happened to buy the very same land with Adderley's house on it, and be environmentalists. The land was purchased by the Florida Keys Land & Sea Trust in the 1990's thus ensuring the preserve is the last remaining chunk of actual mostly undisturbed nature on the Keys for future generations. 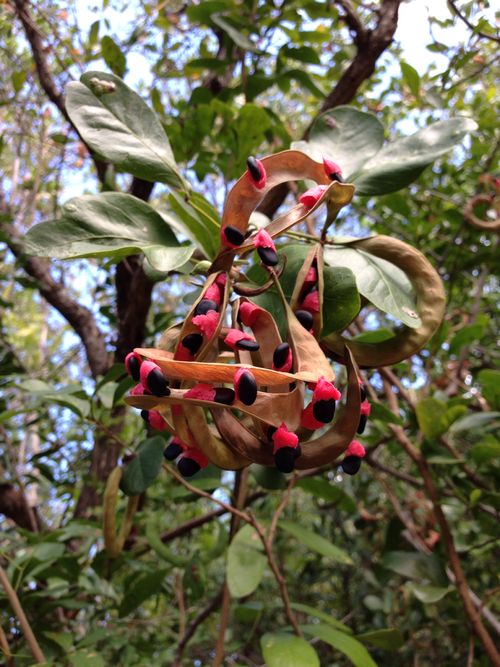 It is the only "nature" I have ever seen in Florida other than invasive species around an urban ditch. 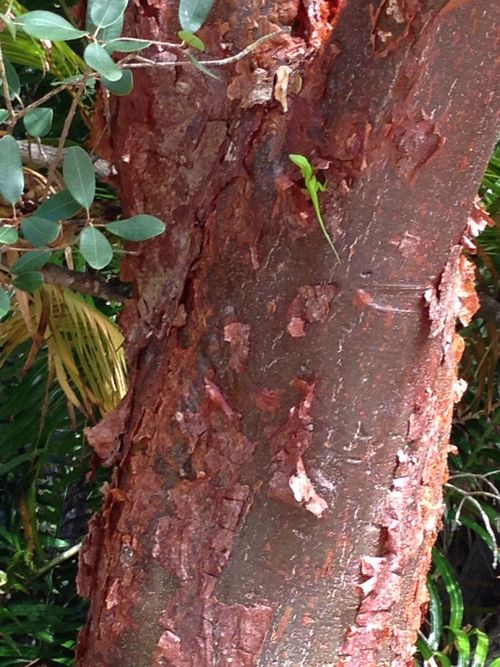 On top of this treat we also got to see a manatee when we reached the point, it even poked its head up out of the water as I was photographing. 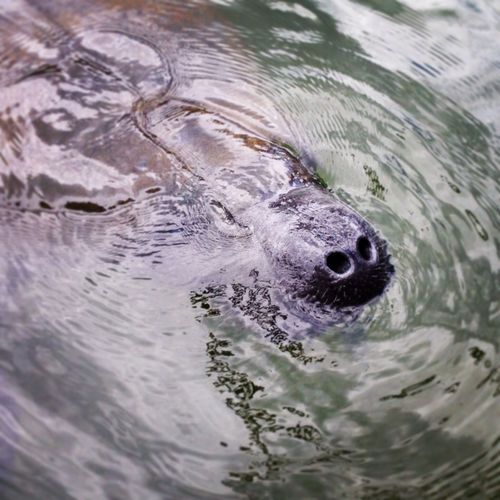 Having taken in nature and history and being on a conservation kick we made our last stop of the exploration day the Sea Turtle Hospital. This hospital is a non-profit started not long after the endangered species act was put into place protecting these ginormous and not really bright sea creatures. 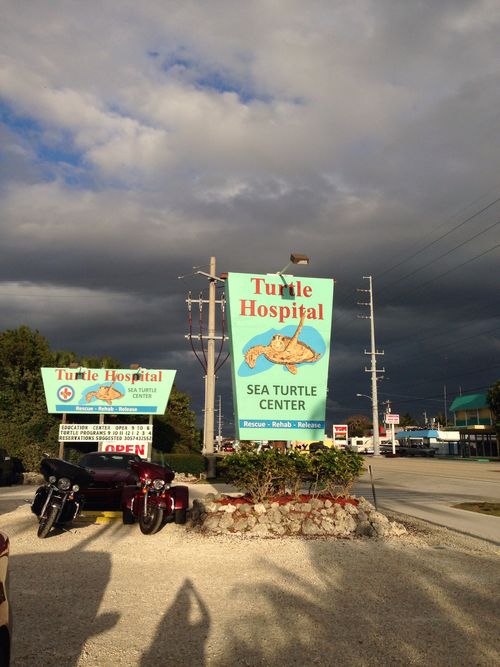 The largest sea turtle, the leatherback, can get up to about 2000 pounds we learned. Meanwhile, in the hospital was only one almost mature turtle, age 25, admitted for eating garbage and needing to work out the residual gas that comes from trying to digest plastic that makes a turtle float (and die if not rescued).  It can take a sea turtle up to two weeks to expell a piece of plastic – meanwhile they are floating and eating more plastic because they are floating on the surface.  Thus, the need of rescue. 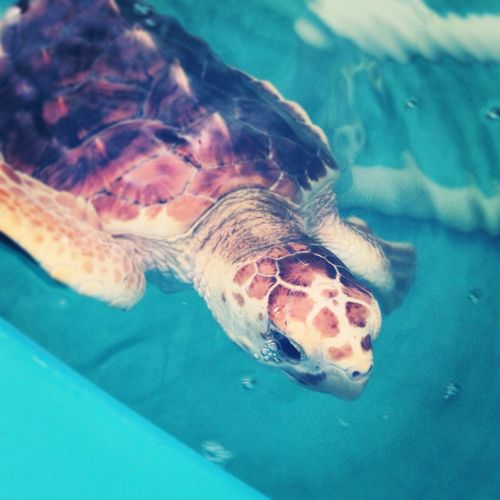 There were also turtles with what they have termed "bubble butt" syndrome. A permanent gas bubble in the tissue makes it impossible for them to submerge without weights on their shell.  This is caused when boats hit their shells, however, there is no identified cure or understanding as to why it happens to some but not all sea turtles hit by boats. 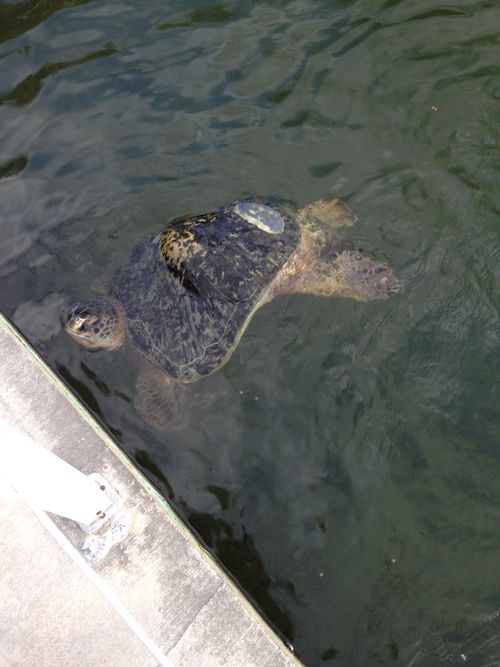 These "Bubble Butt" turtles can never be released into the wild as they will die when they shed the weights so the turtle hospital keeps them or appropriate facilities can adopt them – like Mandalay Bay casino and aquarium in Vegas.  Above is the picture of Bubble Butt the first sea turtle to be found with this condition. 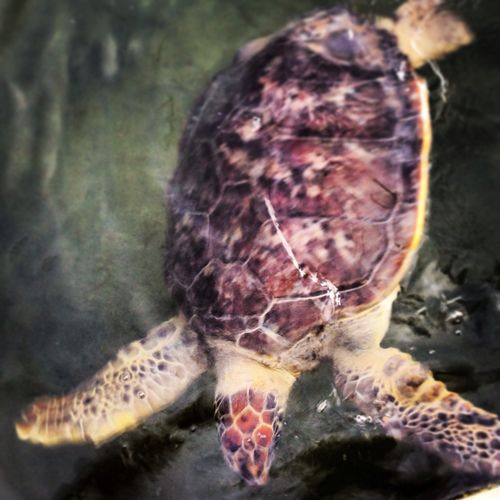 After getting to feed the sea turtles and watch their clunky bodies swim around the giant tank at the hospital we took our tired feet home to wash the sunscreen off and decide upon dinner. Evan found us a BBQ establishment just down the street called Porky's. 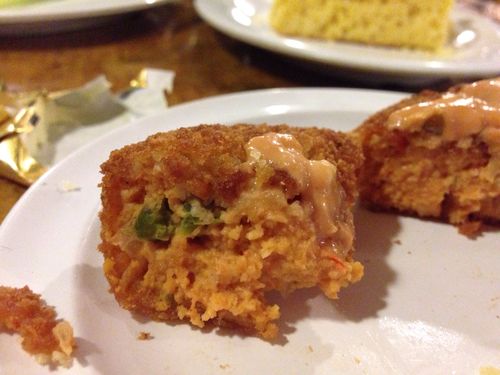 Very different fare than the prior two days it was still delicious – and we had the most delectable crawfish cakes before our Cuban and Carolina style pork fest. 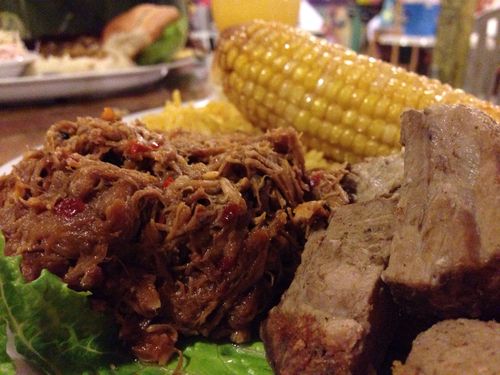 The scenery involved live music and Anne Rand quotes all resting upon a dock. 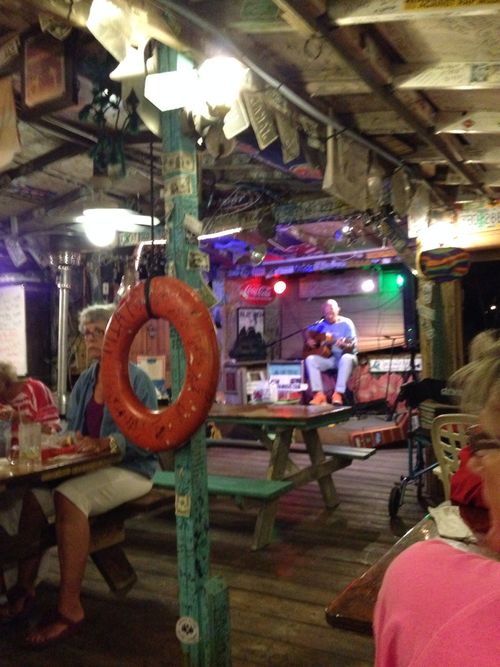 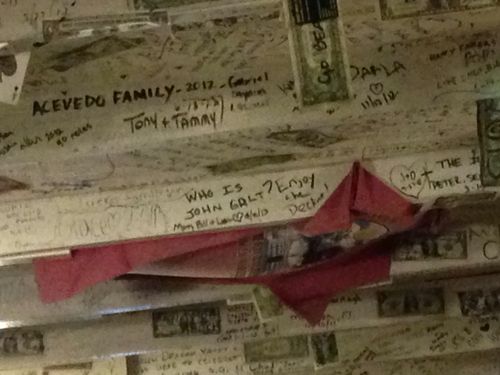 I only earned one more new mosquito bite before we returned home with our 3rd day's box of keylime pie to go. This our last dinner before the journey home to Seattle.