I arrived at Charleston airport just a little too early.  As the entire airport is under construction there is just a temporary seating area and a lot of dust to enjoy while you wait for boarding.  I didn't know it yet, but it was to be the slowest/most relaxed two hours of my day as the rest of my travel day involved rushing from flight to flight, turbulance and nauseous pregnant women puking next to me, rental car hiccups, Florida traffic jams, culminating in arriving late for my poetry workshop introduction.

While sitting in the Charleston airport I did get a chance to drink a grapefruit beer that was amazing.  It was the only thing amazing I got to eat until 9pm as I had to run through the Atlanta airport and there were only pretzels on the airplane. 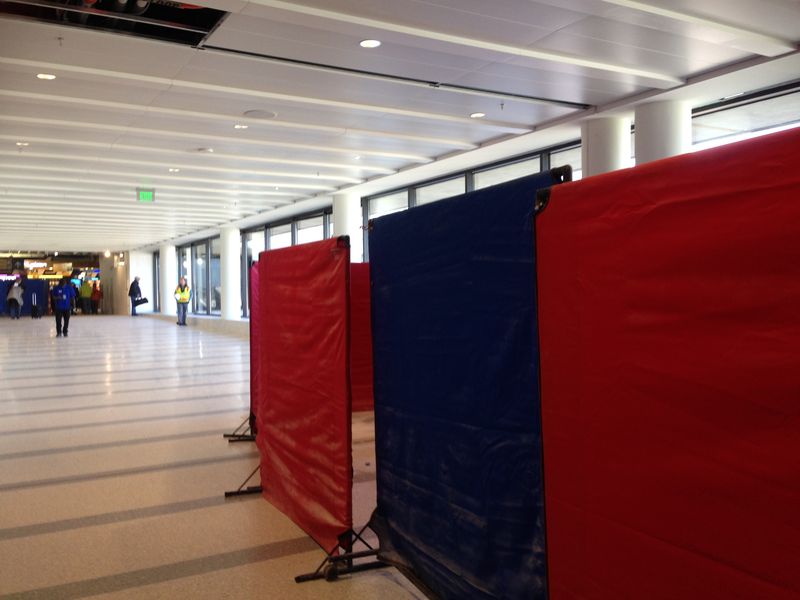 When I arrived at Fort Lauderdale's Hollywood airport in Florida I picked up my bag and boarded the shuttle to the rental car center. 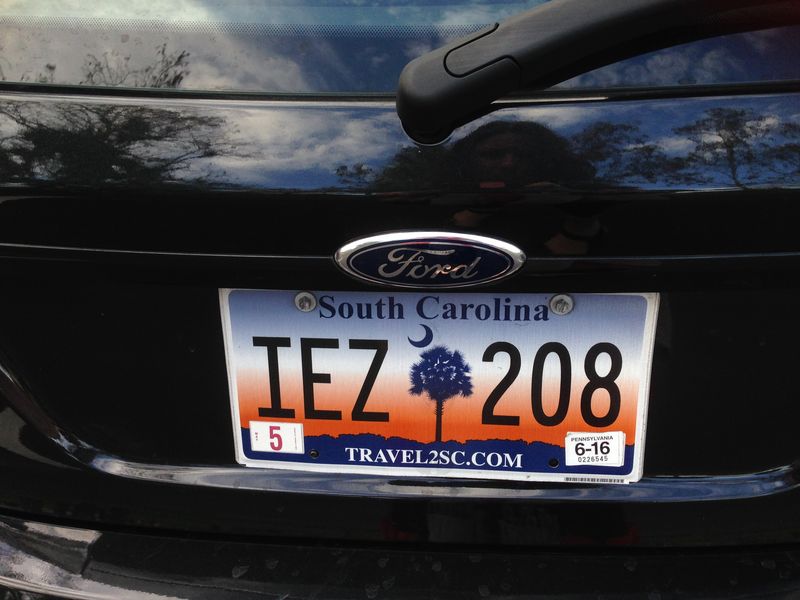 My very inexpensive rental car agency that shall not be named informed me that there were no economy sized cars available for me because their one was broken, so I wandered out to the parking lot and found my mid-sized car sitting next to a Black Ford Fiesta filled with a very large and frustrated man fiddling with the mirrors.  I asked him – I wonder why they gave you that car and me this one?  He said, "Yeah I know, I have to fit my 90-year-old mother in this one…hey, you want to trade?"  So we struck up a deal got the paperwork switched at the counter and I drove out of there with a small car with funky mirrors. 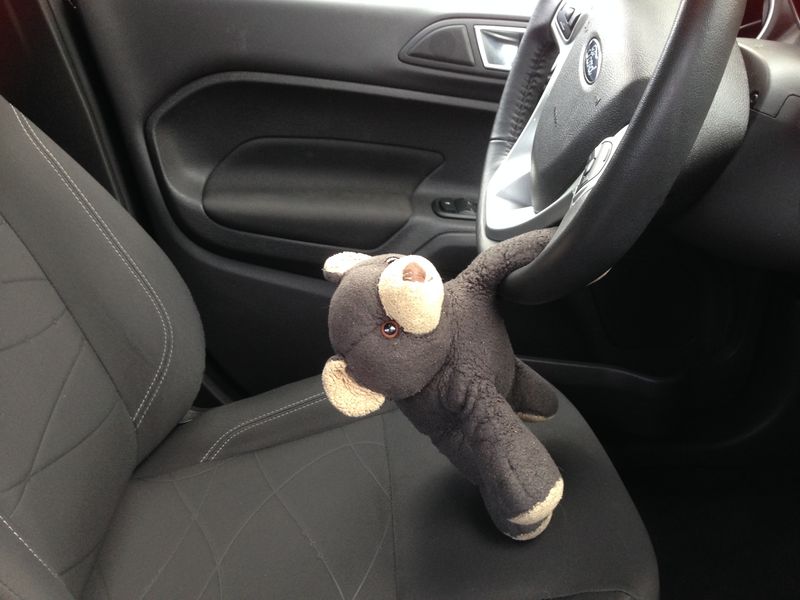 It and the I-95 traffic did make me completely miss the poet reception at the Palm Beach Poetry Festival and a wee bit late for the introduction of my workshop with Kevin Young.  I hate being late but I sucked it up and said I came in from Seattle so everyone was impressed with how far I traveled. 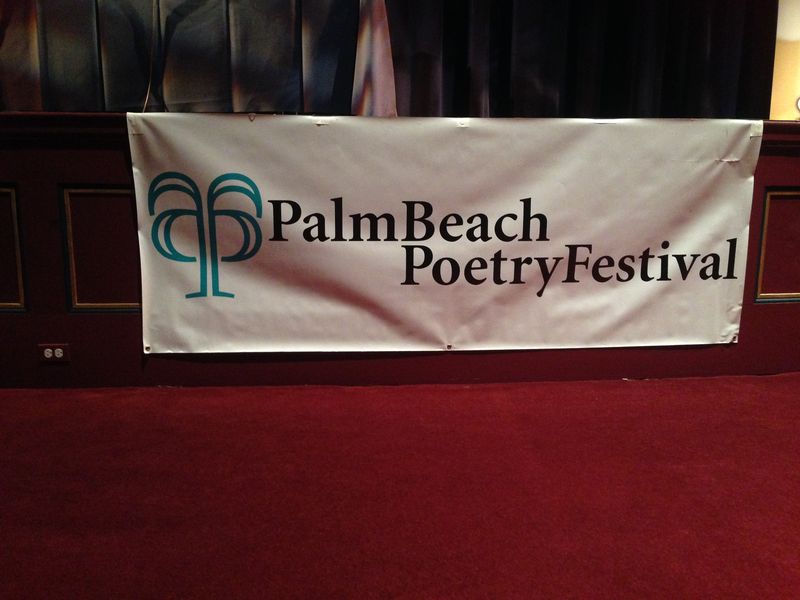 Because I was late I think I missed all the ground rules of the workshop, and since I am an auditor because my original application got lost in the mail, I am just going to have to wing it based on my prior workshop experiences.  I did at least learn I needed to pick-up a book in the bookshop the next morning for the part I can participate in, and was relieved to find other people in the workshop who were younger than 40.  Kevin was my second choice to Mary Szybist, who is currently my woman poet hero using both religious iconography and reclaiming the feminine identity in her poetry – but Kevin is focused on food, elegy, and studied under Denise Levertov, so he will do just fine. 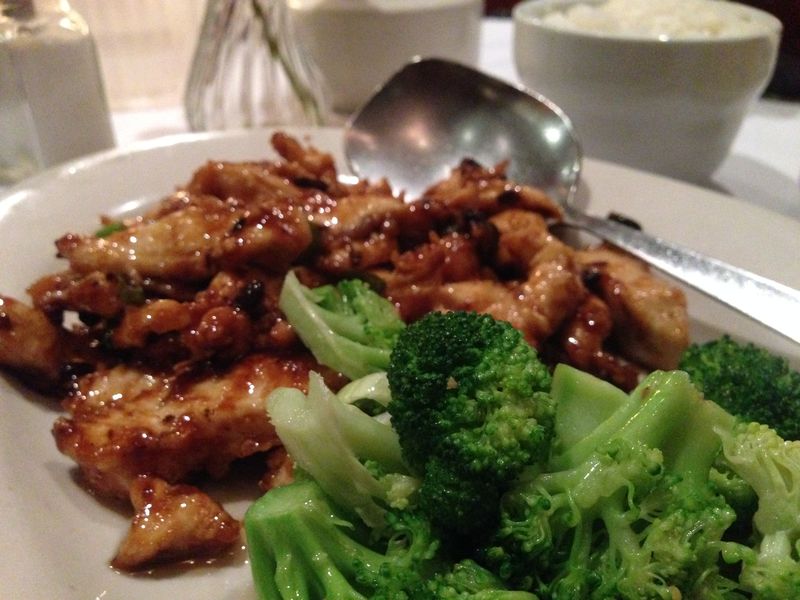 I was thirsty and starving so immediately after the workshop introduction I called my step-mom to check-in and say I was going to get some food in Delray Beach as it appeared I am in a center of culture and hub-bub.   She wanted to meet for dinner, so we met up at Uncle Tai's in Boca Raton's Town Center.  I wanted Chinese food because I'm currently reading a book called Shark Fins and Szechuan that is really making me want to travel to China and causing uncontrollable urges to eat Chinese food.  Above is Uncle Tai's Chicken, chicken fried in black bean sauce with a side of broccoli, hitting the spot for both savory chicken and broccoli I was having. 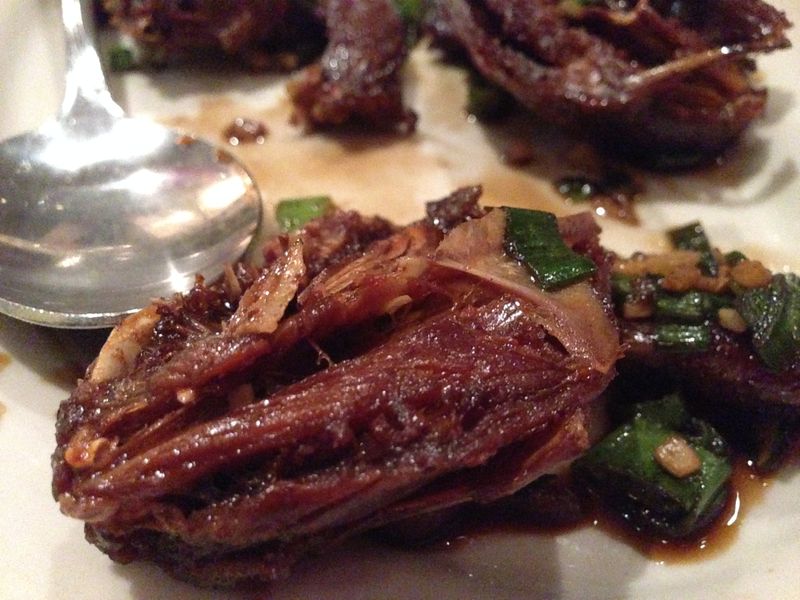 The ever food curious I also talked Beverly into crispy quail(above) and steamed black bean mussels. 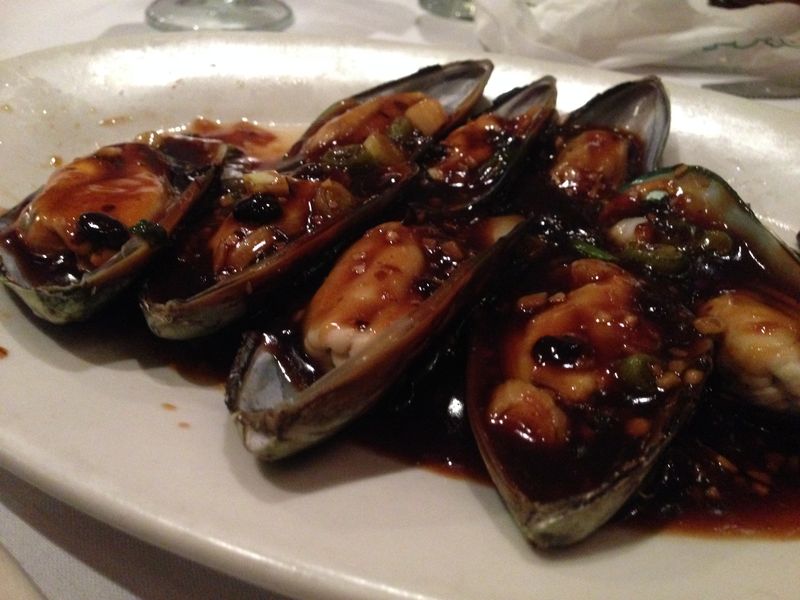 I could not resist ordering this chicken and pickled vegetable soup. 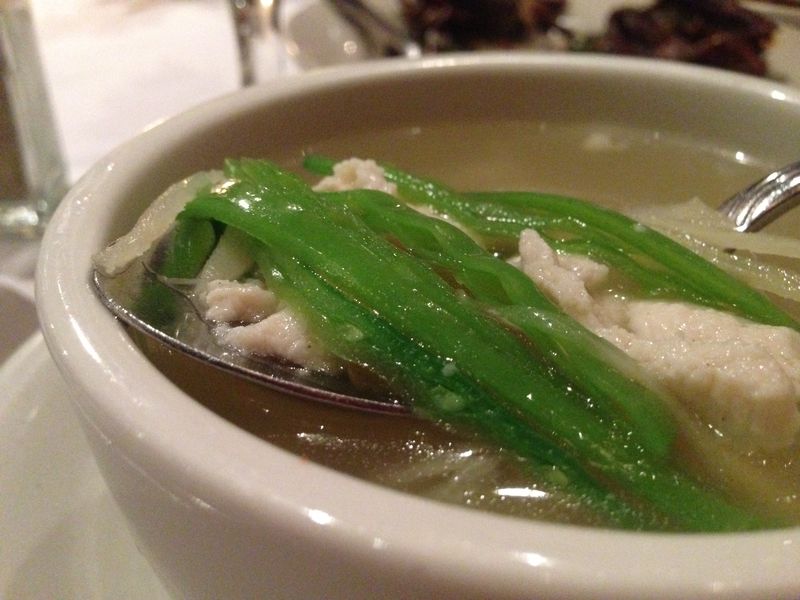 The soup was really good – it tasted exactly like described, chicken broth with little slivers of pickled vegetable in it.  The quail was crispy and rich and the mussels were coated in black bean sauce.  Straight ahead solid chinese food -craving satiated until I dive into that book again on the flight home to Seattle. 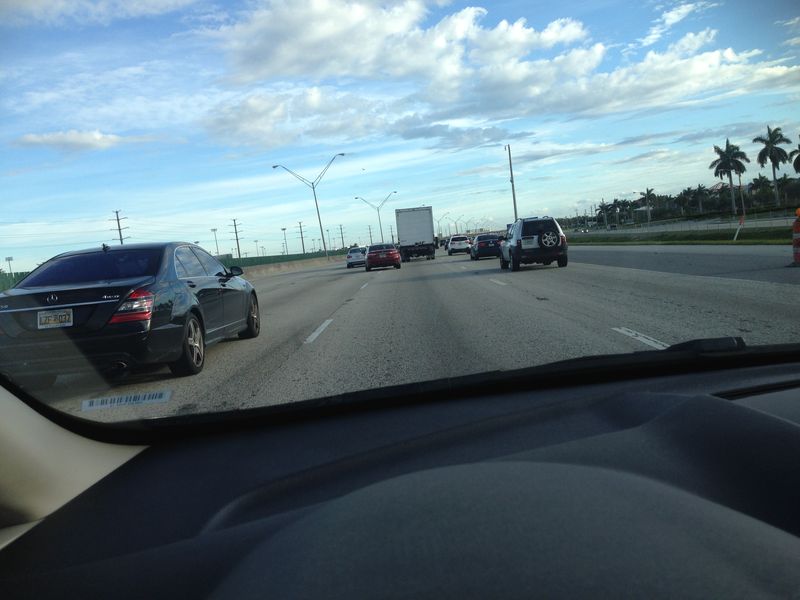 Food in my stomach we headed home and settled in for the evening – in other words I passed out attempting to read about my breakfast, coffee and lunch options in Delray Beach the next day.  I got on the road to Delray Beach the next morning bright and early so I had time to find coffee, breakfast and internet.  My father's house does not have internet, which causes me a little bit of anxiety.  Florida's I-95 traffic also causes me a little bit of anxiety – it was probably not safe to take this picture, but I did.

While listening to one of the multitude of pop music radio channels available in Southern Florida I heard a morning show where caller number 9 got chosen for a type of quiz.  The quiz was very shocking to my northwest sensibilities, among other things.  The quiz consisted of describing a bit of a botched robbery, where the robber actually agreed to come back the next day so the 90-year-old victim could take more money out of her bank account for him – he would meet her at such and such destination and be wearing the same clothes etc. The thief of course was arrested the next day when he actually came back as promised.  After some jabs at the stupidity of said would-be master thief, the radio DJ then asked caller number 9 to guess the race of the failed robber.  For me this exchange was bad enough but was followed by the DJ's putting in their opinions as to why they wished they could say the thief was Puerto Rican but more likely it was a black man based on his stupidity, the caller guessed black and the announcer encouraged her with "You really know your black people then don't you?  You are correct! The stupid robber was black!"  So this morning I learned racism is alive and well in Southern Florida and is a contest on the radio.  Wow.  My rendition above is not doing the abject ignorance justice. Happy day after Martin Luther King day, we have come so far. 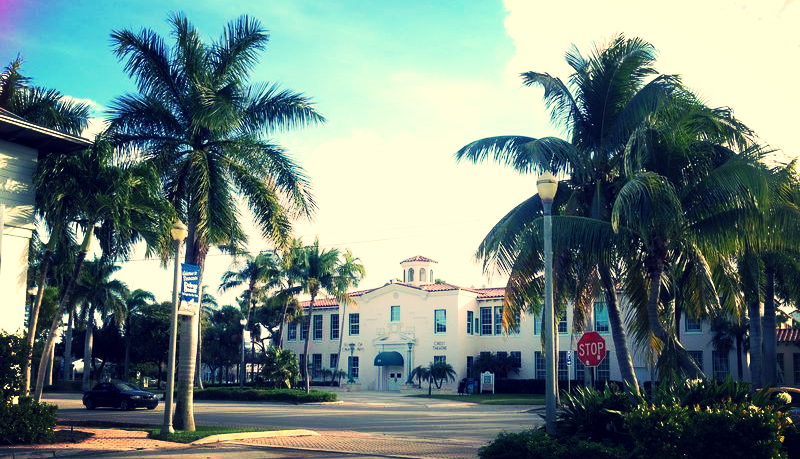 This is Old School Square – the home of the Palm Beach Poetry Festival, located in Delray Beach, Florida.  It is a nice little area with sidewalks, shops and lots of restaurants and this large center for the arts. 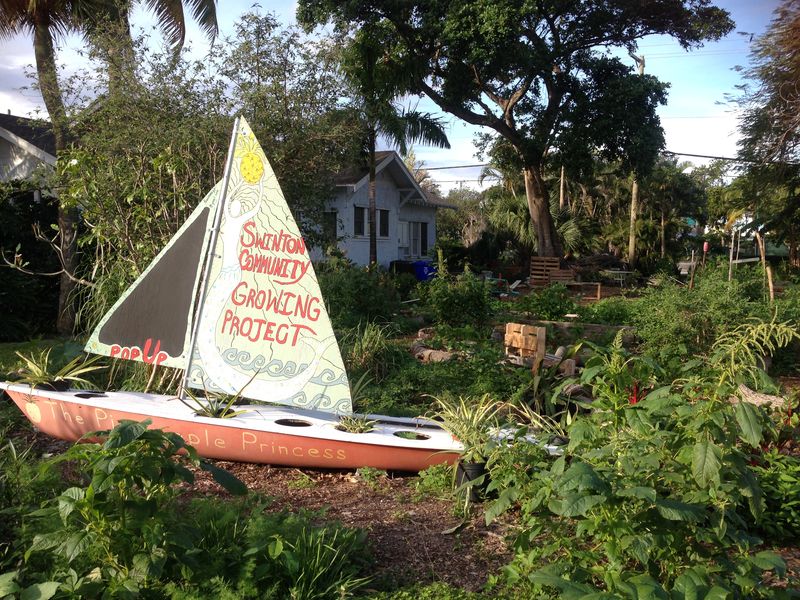 It even has a little community garden project – threatened by development. 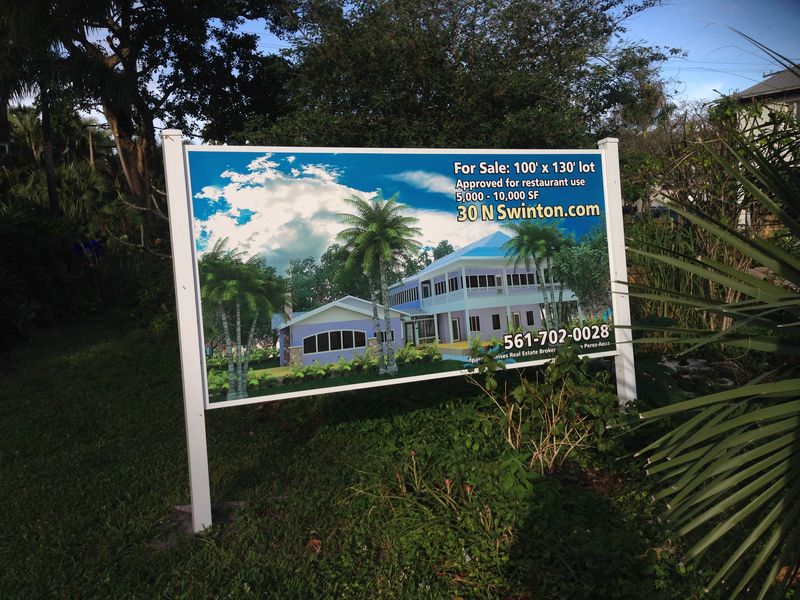 This sign is parked right next to the sailboat in the image above. 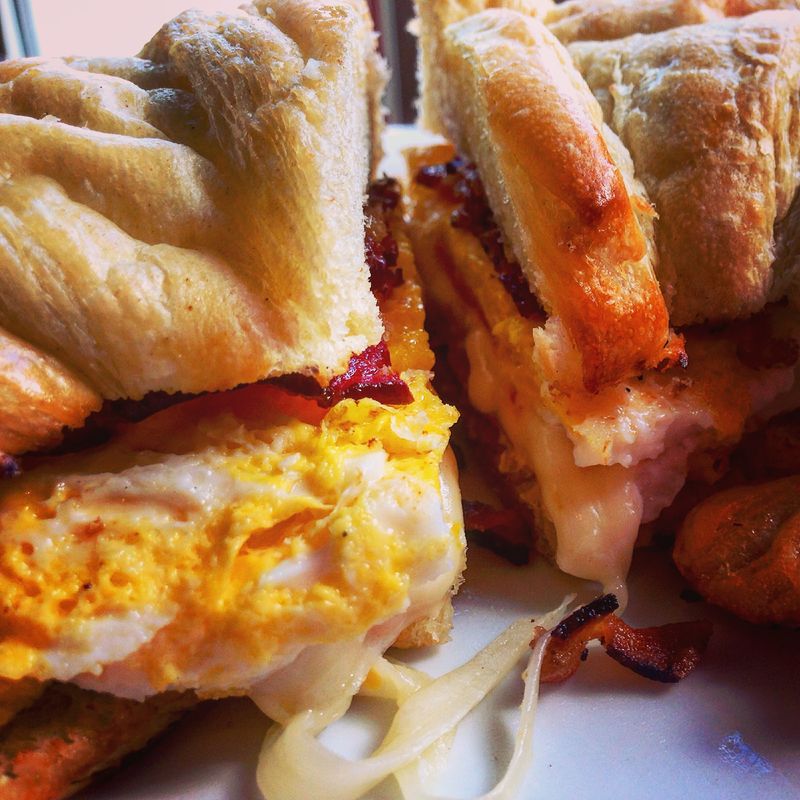 I found a placed called Cafe Bleu that had coffee and food and got myself this lovely Ultimate Breakfast Sandwich following the "build your own" instructions of the barista. I accompanied it with a grande Americano.   I ate it while checking my email and slightly concerned about the time, so I didn't really taste it, but the picture sure makes it look good. I enjoyed a good three hours of poetry workshop and discussion then it was time for lunch.   I failed to actually complete any research on where I should eat in the area so I walked the sidewalk and chose the place that on its face appeared to be a quality establishment – and they had a grilled octopus special on the chalk board that won me over. I'm not going to say the name of this restaurant because although the food looked good (see picture above) – it was all wrong.  Call me Gordan Ramsey but I think we have a restaurant nightmare going on here.  The octopus was grilled but rubbery (a sign that it was frozen) soaked in some weird butter concoction then topped with the most over lemoned and vinegared frisee lettuce I have ever tasted.  The lettuce was actually inedible it was sooo over the top coated in lemon and salt and vinegar – and I love sour things.  The spanish rose' I ordered to accompany it was good.  The local promotional magazine's dining guide (that I read while I was sitting there) mentioned that the place is "always full" but said nothing about the quality of the food – never a good sign.  I should have done my research.  I will for tomorrow because my stomach did not feel so good afterwards as I went to listen to Kevin Young and Mary Szybist talk about how they craft poetry. 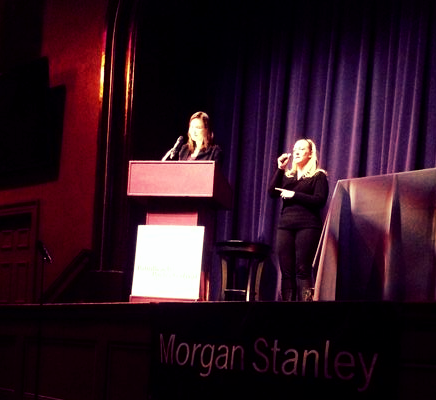 Here is Mary Szybist being extremely soft spoken and brilliant.  The person standing next to her is a sign interpretor, which is pretty cool that a poetry conference has a sign language interpreter. Kevin Young was also quite amazing, but I didn't take a picture of him because I'm not following him across the country. Down the street from Old School Arts is a little coffee shop called Subculture.  They have everything a place called subculture could be expected to have – single origin espresso, internet, craft beers, and real music (Joy Division, The Cure, David Bowie) being played over the speakers.  I have found my little internet cave for the rest of the week.