To only exprience two days of rain on a trip in January, when a big portion of the United States is covered in snow, I have absolutely nothing to complain about.  The rain on Friday when I was in Florida did, however, turn the roads into a very exciting form of chaos to participate in – that was a little bit less than relaxing.  It also made on foot exploration of my arty neighborhood in Delray a little less desirable. 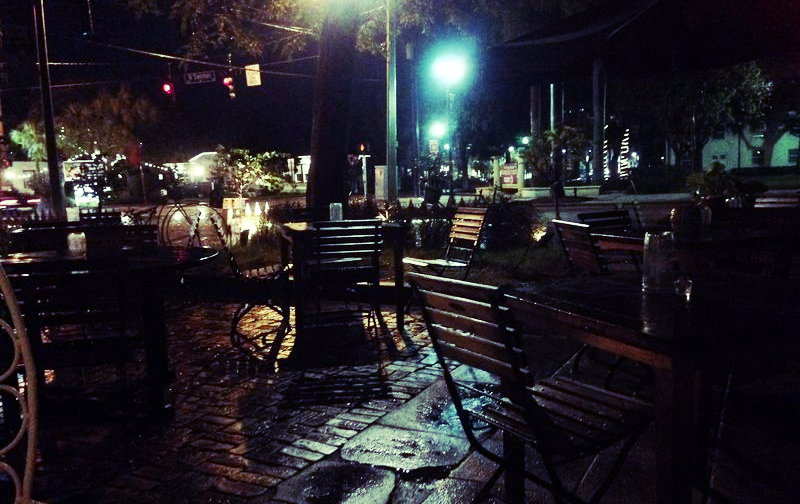 Looking back on it now, I have very few photos of this day in Florida because there was so much water falling from the sky and it had me running from place to place.  After class in the morning I talked to my dad who was caught up with something work related that was going to take longer because of the rain, so I took the opportunity to try Brule Bistro – a little place heralded for simple good fresh food from the farm that I had been trying to get to all week. 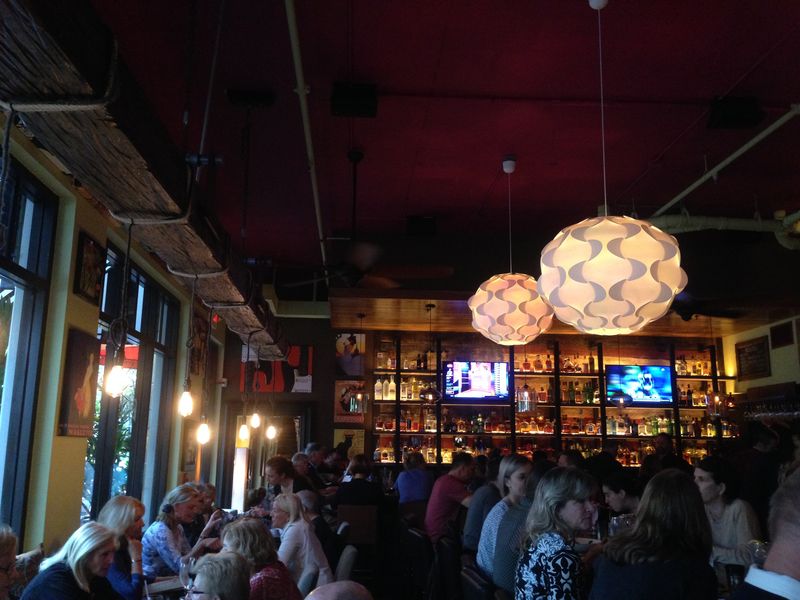 I was obviously not the only person who wanted to be at Brule Bistro to get out of the rain that day. When I walked in to the little place with no hostess stand, just an awkward door in the middle of a seating area with my slightly damp self standing amidst the hustle and bustle of a slammed bistro – I realized the place was crazy full and took a picture.  I smiled brightly at the beacon of hospitality who came near me and asked, with much courtesy, if there was a spot for "just me? anywhere is ok."  This lovely soul was able to rearrange some materials on the bar to make three new seats, of which I was able to take one. 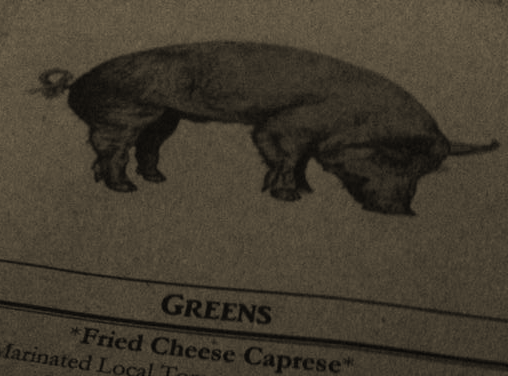 I was, sadly, first given the dinner menu and had my heart set on a grilled salad and a foie gras PB&J – but the universe obviously wanted me to be more heart healthy because when I made my order the staff member looked at me as if I was from the moon. He hastily regrouped and said "oh! I'm sorry, you have the dinner menu." And whisked away my options. Sometime later a new menu was presented, it was a tidge bit more lunchy and missing all the things I thought I had wanted – so I settled on the pork cheek "pizzas" as they were called with a side salad. They were lovely – albeit they could have called tostadas, because that is what they were.   I couldn't help but eye the beef grilled cheese next to me, but I knew I made the healthier choice. While I was carefully chomping away on my lunch items I noticed that the sky was pouring sheets of water upon the street outside and noted that I had no umbrella and no enclosed case for my computer.  I was offically stuck at the bistro until the flash flood subsided.  So I made some conversation with the fellow to my left who turned out to be a litigation attorney who worked in the neighborhood and whose wife was on the board of the art building my poetry festival was being housed in.  Small world moment.  We talked about food and travel, and my good choice of lunch spots.  He took pity on my predicament with the rain and agreed to drive me to the car so that I could meet up with my father before the whole afternoon was lost. 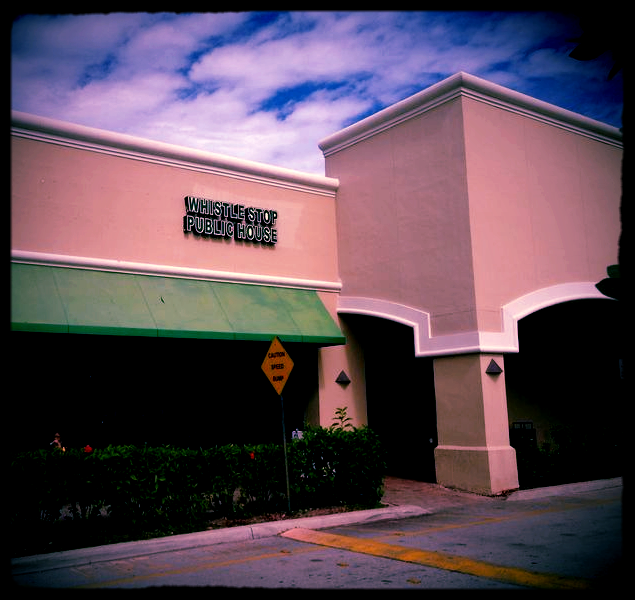 I did not meet my father at the Whistlestop Public House or the Moose Lodge,  that would have been pleasant in comparison to where we had to go.  I picked my father up at home and I was informed that we needed to go to a wake for a friend, a recent victim of cancer, at a bar called Dr. Feelgood's.  Think seedy stripmall next to a bad neighborhood on the wrong side of the tracks – but inside is filled with a bunch of retired folks with nothing left to do but drink light beer in the afternoon in a dark cave.  I was introduced around the bar through the various yelling tactics used by the hard of hearing and then asked what I wanted to drink.  I got a club soda with a lime.  I told my dad, its like a gin & tonic but way more refreshing especially when you have to drive through rush hour traffic in Florida.

Sitting next to me at the bar was a young woman, only a year older than I, drunk beyond comprehensible speech. This did not stop her from trying to talk to me.  I smiled at her and nodded my head and listened – I magically mostly understood what she was trying to tell me, this does not mean that her sentence construction created a linear narrative – it just means I could make out what she was saying.  In the most compassionate way I was very sad for her.  Everyone in the bar knew her, she had no nearby family, no one that "took care" of her, but she did have an semi-unlimited trust of money which she used daily to get whizbang intoxicated.  I did learn while "talking" with her that she speaks polish, which no one else at the bar knew about her, and I could tell she was self-medicating on her brightly glowing lime green alcoholic beverage in order to disappear from this world.  "Don't listen to me, I'm just a drunk."  she said over and over to me.  I told her that she was a beautiful human being because she obviously needed to hear it – then she promptly went to the bathroom and positioned herself on the other side of the bar from me when she came back.

My father smiled and said he put me next to her because I had the patience to treat her as a fellow human.  Sadly though, it was very obvious that no one in that bar was at all interested in intervening on this woman's path to self-destruction. I hope my kind words reached somewhere inside.   We apparently paid our respects to the dead fellow by taking some deviled eggs and baked zita from the buffet – so I had Dad take care of that for his dinner – and then I got a bud light bought for me by a fellow who looked like a mafioso on retirement from New York who bought a whole round for the bar.  Just another day in the life of South Florida, I was primed and ready to get out of Dodge and back to my poetry cocoon. 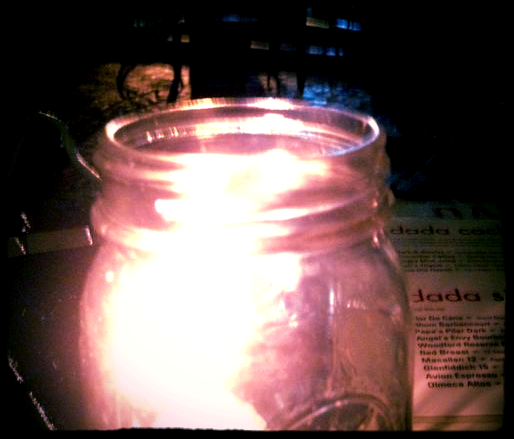 I give gratitude that I have wonderful people and family in my life that love me and encourage me to grow.  There are so many humans in this world suffering from isolation and grief, self-imposed, mental-illness imposed, or victims of abuse – we have to choose to be the light we wish to see in this world so that one person at a time we can all heal. 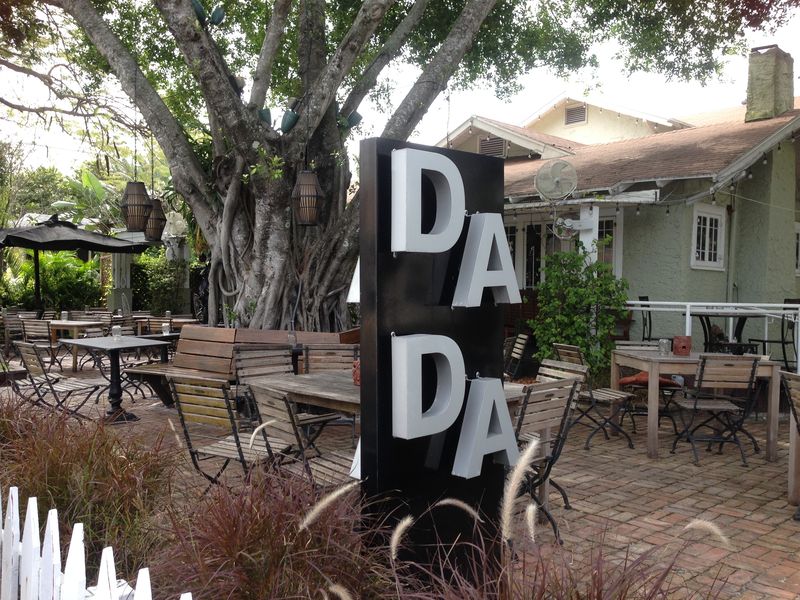 Reaching a slightly damp version of this artsy restaurant DaDa was a helpful place for me to reimmerse myself back into the less dreary world that some Floridians have the option of living in. 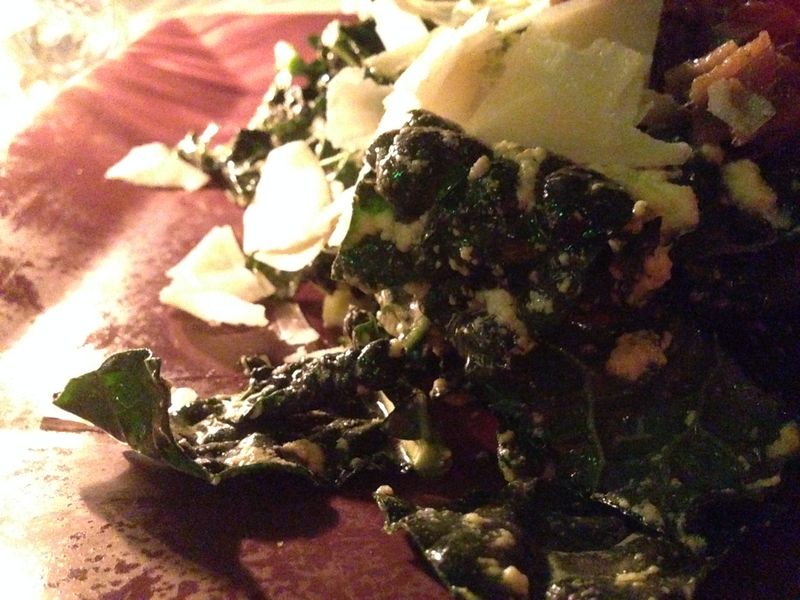 My server even "talked" me into a Kale Ceasar.  He said "I never used to eat kale, until we got this dish on the menu, now I eat it every day!"  Good job- little did he know I'm a kale advocate – I love kale, and I especially love it when I haven't seen it in days.  After my much needed intake of hearty dark greens and a lovely glass of rose' I had to make a decision – do I go all out ridicoulously rich or do I go conservative with an okra dish.  I had to go with the 7 cheese layer grilled cheese – because cheese. 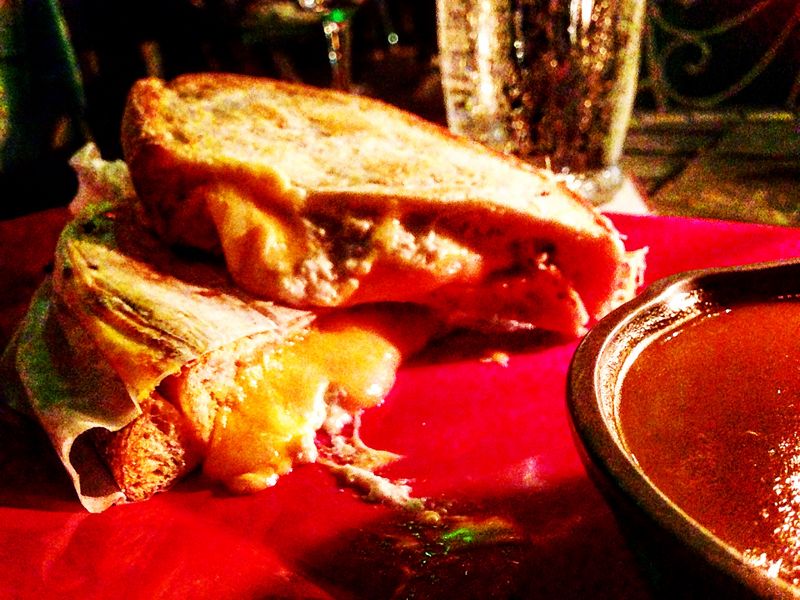 I was not disappointed by cheese.  I am never disappointed by cheese, I am sometimes overly full from cheese, or feel the effects of the milk in the cheese – but it is never disappointment that I feel.  I'm reading a book about Chinese cuisine right now, the Chinese think that cheese is gross – meanwhile they eat most intestines of most animals.  To each their own, and I will try goose intestine if it is put in front of me – but today I had seven layers of lovely rich flavorful cheese melding together in my mouth.  That would be goat cheese, blue cheese, aged cheddar, swiss, muenster, american and sheep cheese. Heaven between two slices of sour dough bread with a side of tasty light tomato basil soup.  It was a perfect remedy for the rain. As was the night of poetry by Mary Szybist that followed.  Both poets had soft spoken voices but gigantic subjects brought close to home by the pure skill of their craft.  We learned about life and death through the eyes of a little girl obsessed with eating fish eyes, and love through the hearts of an octopus. 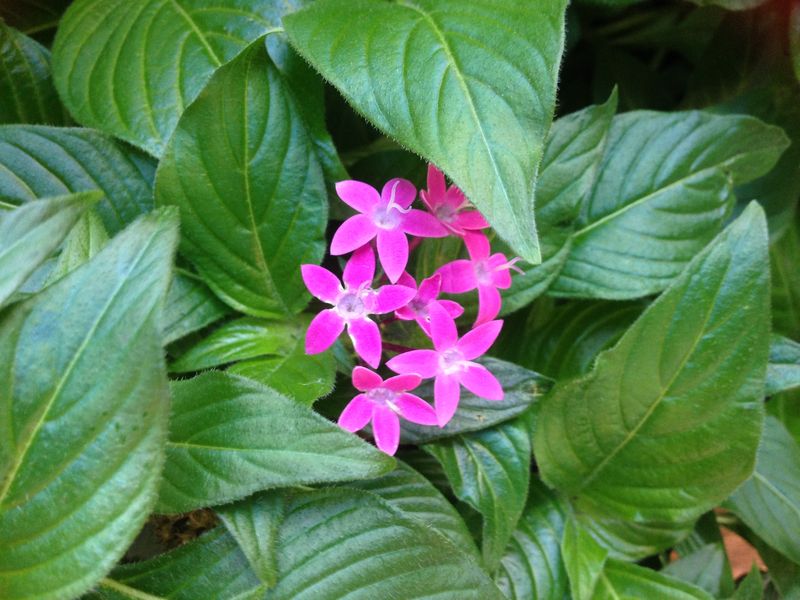