I recently joined a meat CSA.  Mine has the catchy name of "Farm in a Box" and is essentially and mix and match of small farm raised organic beef, pork, chicken and lamb from Baron Farms in Yakima Valley.  Last month I received bacon, steaks, ground lamb and beef, and a giant package of spare ribs.  I never attempted to cooked ribs before.  I stared at the package in my freezer for three weeks before I decided to take on the challenge.  I did not disappoint myself. 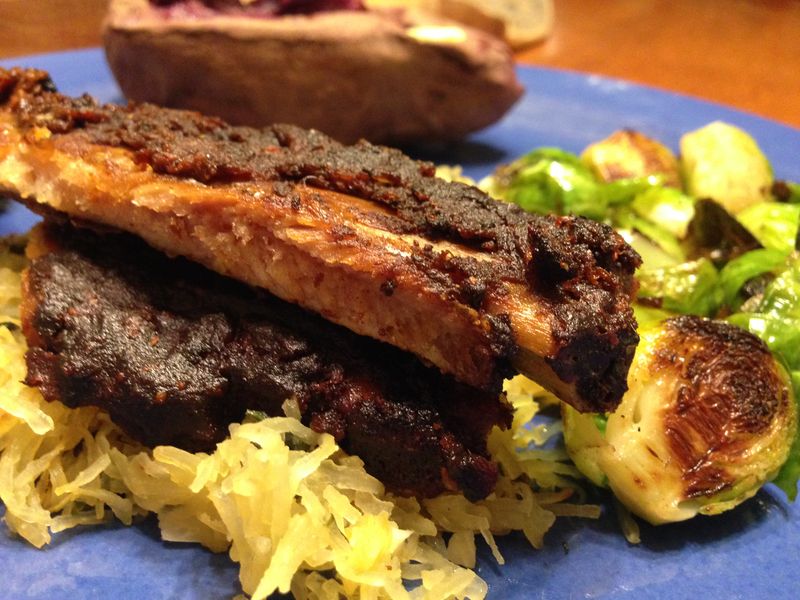 First, it being November in Seattle it meant that grilling the ribs was out of the question.  Too much water falling from the sky.   So this operation would require a slow oven cook. 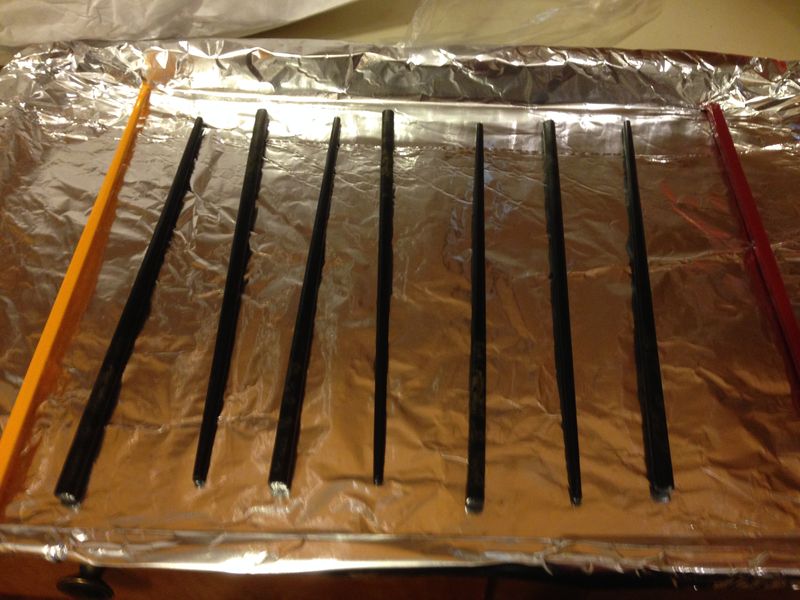 To slow cook spare ribs you need an wire cooling rack and a tin foil covered baking sheet. You want the rack so that there is air flow around the entire rack of ribs to aid in its even cooking and tender final texture.  As I use the newspaper method to cool cookies on the rare occasions that I bake – I did not have a wire rack at home – but I did have a whole slew of chop sticks – so I was able to rig something up that did the trick. 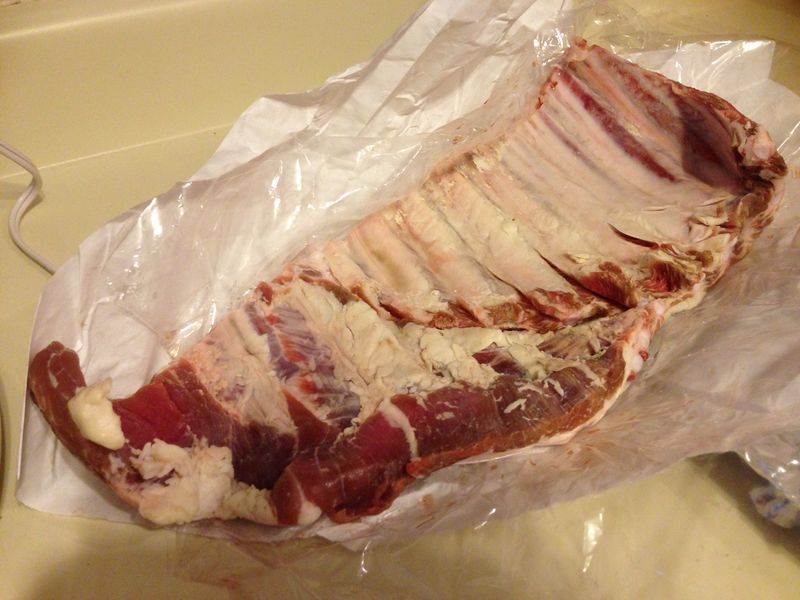 Next it was important to figure out which side was the "meat" side.  I followed a basic "How to Bake Ribs" article I found on the internet that had no pictures of the process, with slightly vague instructions.  It seemed good enough for a guideline, though when looking at the ribs I wished there was simply a picture of which side went up or down.  So I guessed that this side, where you could see the ribs predominately, was NOT the meat side.  Then I got going on my homemade BBQ sauce. 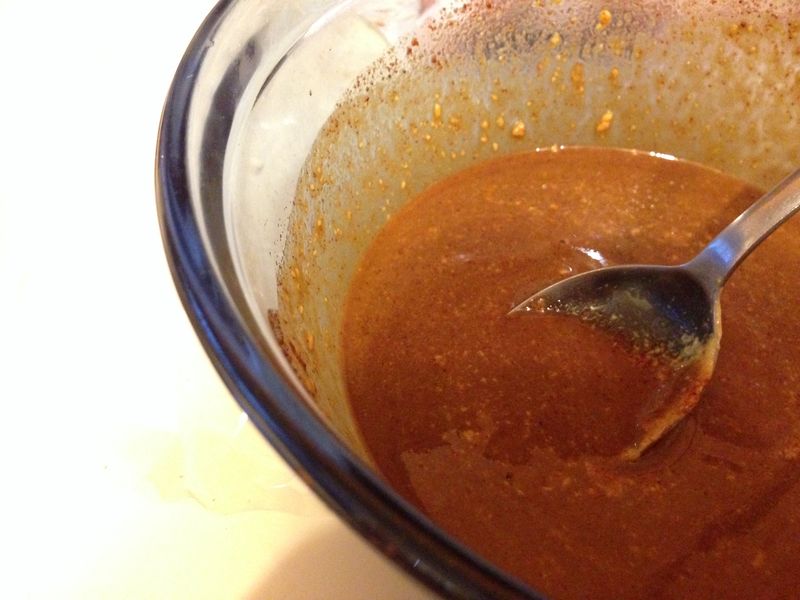 I am going to call this my secret recipe because I didn't write down what I put in it – so it is even secret from myself now that I am writing this story.   I do remember that it features dijon mustard, siracha, red wine, apple cider vinegar, smoked paprika and garlic powder.   I do not remember anything else.  It was pretty zesty until I poured in the red wine and then it evened out quite nicely.  I recommend you play the sauce making game with the random condiments lying about in your refrigerator and see what happens – it is quite fun. 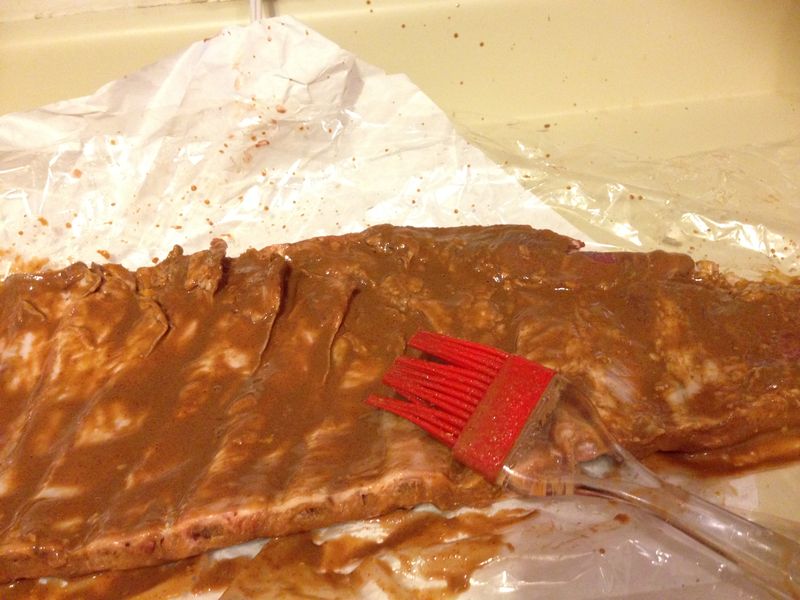 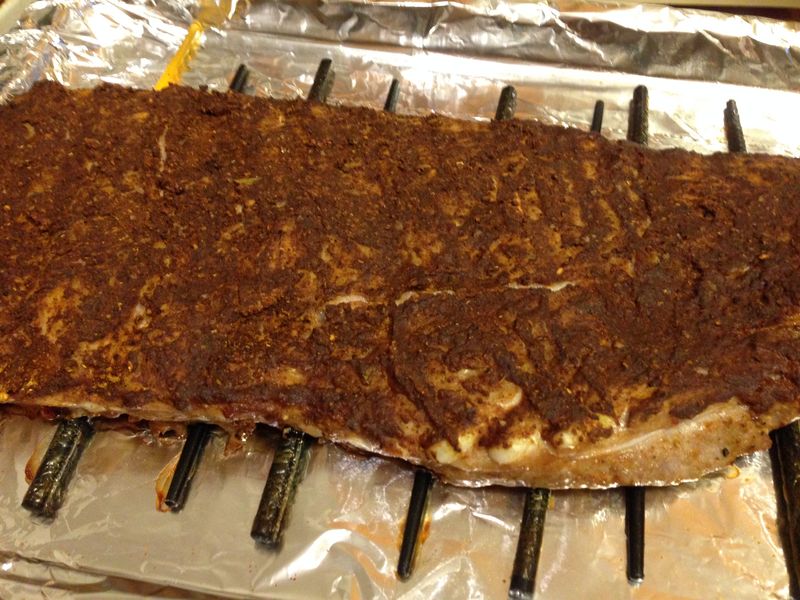 Then I dusted the ribs in what I thought at the time was tandoori curry powder I made – but later realized was my leftover stash of homemade Ras el Hanout, a North African mixture that translates to "top of the shop."  This was a blessing because the tandoori powder was very spicey and I used A LOT of Ras el Hanout, rubbing it into the nooks and crannies of the ribs on both sides, blending it in with my secret sauce.  So in short the spare ribs would have been extremely hot had I actually used tandoori powder, instead they were just extra flavorful and still very edible. 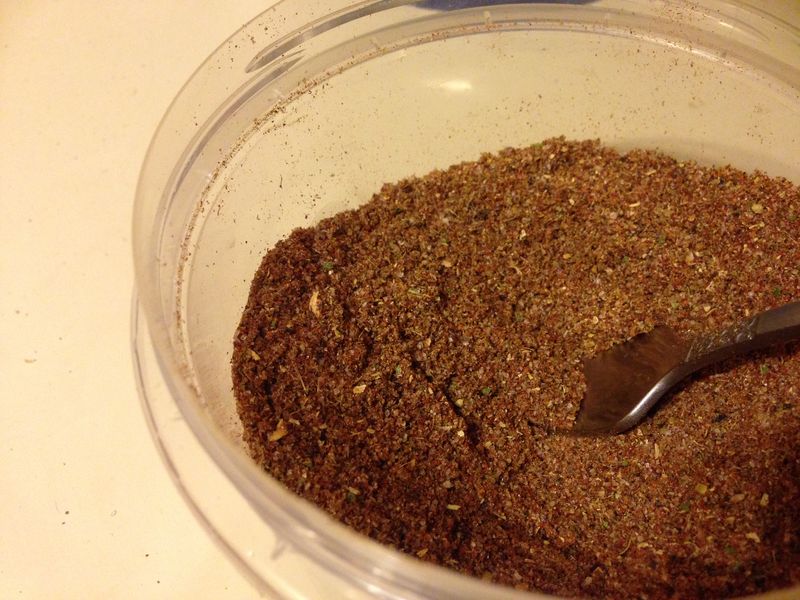 You can find Ras el Hanout in most spice shops or you can make your own mixture – I recommend making your own from a recipe and using your spice grinder. 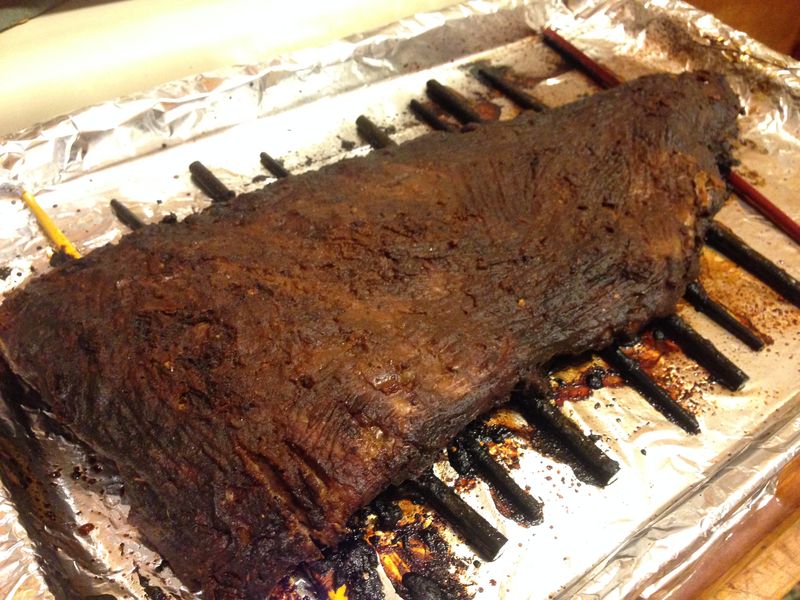 First you bake the ribs with just the sauce and the spice uncovered in a 300 degree heat oven.  Then about an hour later you cover them and cook some more.  Then 30 minutes before they are done you baste them in a BBQ sauce.   I did a mixture of my secret sauce with more spices, siracha and apple cider vinegar.  In the end they looked like above.  I let them sit for a wee bit then cut them up using a kitchen shears. 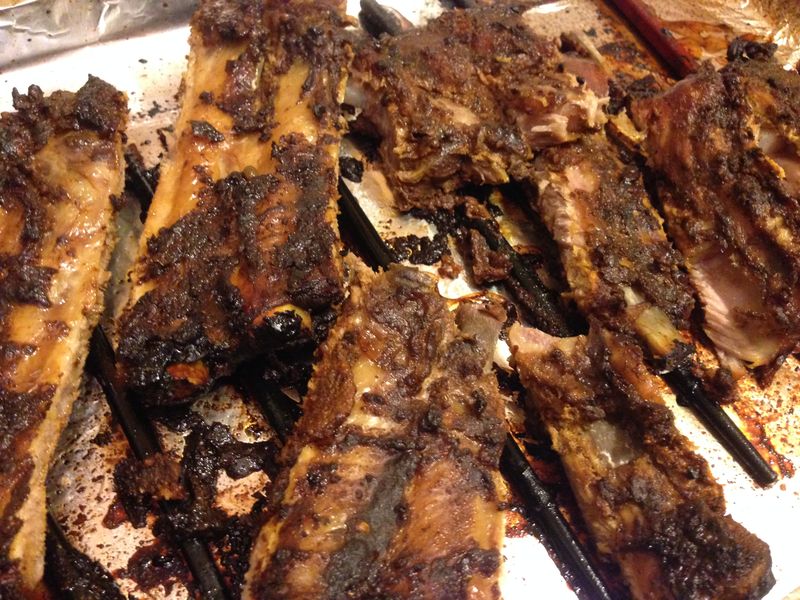 I served them with a side of purple sweet potato and brussel sprouts and layed them on a bed of spagetti squash – a perfect winter evening meal. 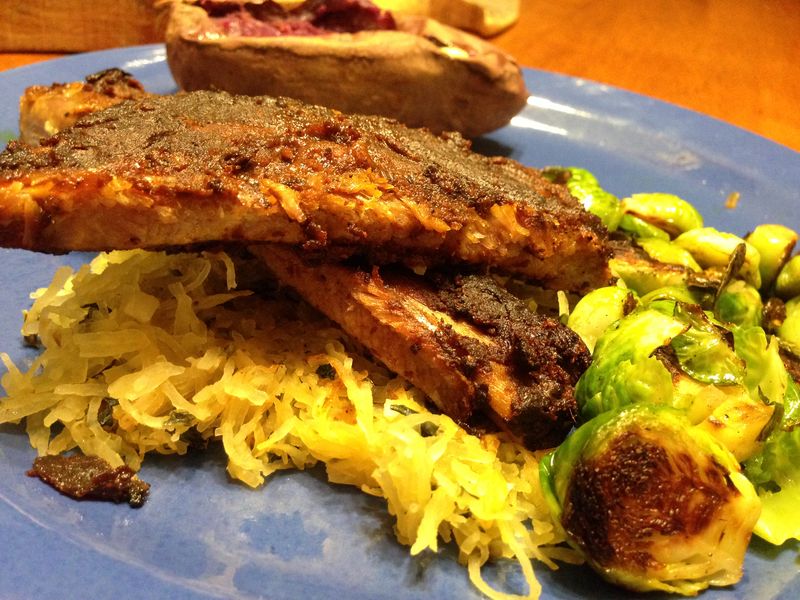 1 to 2 cups of homemade barbeque sauce (ingredients including but not limited to mustard, tomato paste, red wine, garlic and/or onion powder, smoked paprika)

Step 1: Create your own homemade barbeque sauce and thickly coat both sides of the spare ribs in sauce.

Step 2: Rub the spice mixture all over the ribs.

Step 3: Place the ribs on a wire rack on a foil covered baking sheet.  If you do not have a wire rack, improvise to ensure there is airflow under the rib rack.

Step 5: Let rest for 5 to 10 minutes, cut and serve with vegetables (your heart will thank you).