Every group trip, no matter how well organized and planned or spaced and balanced always has what I call a "long march." It is just an inevitability when traveling with groups. Sometimes it sneaks up on you.  Sometimes you can see it is coming. But it is the day where something goes wrong, or something takes just a little longer than it should, or one detail isn't quite what someone may have imagined setting off a chain of events that make what should have been "a 3 hour tour" into a walk down what perhaps may feel like a never ending path toward something you are not quite so sure about. 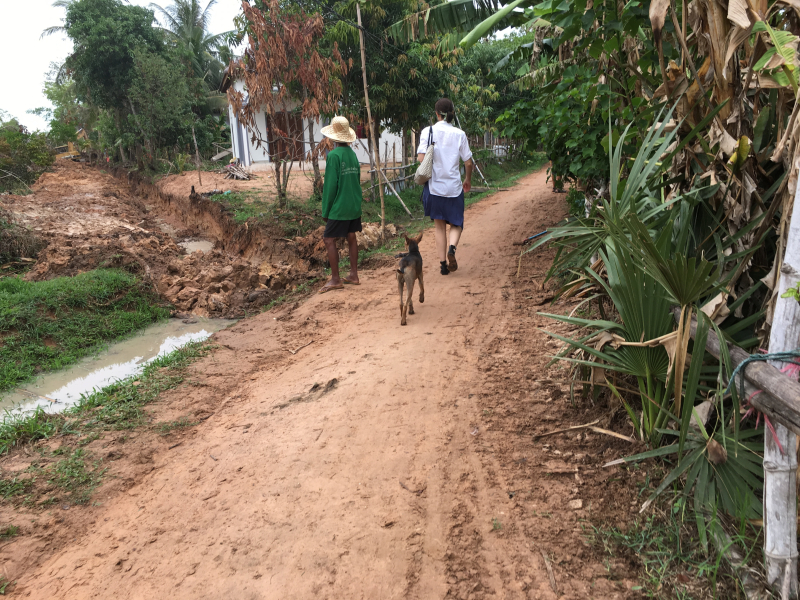 When, starving with 6am delight, sitting on a tuk-tuk, I opened up a tupperware container holding our packed breakfast from Viroth's hotel, and found some mango slices and white toast – I had a strong feeling that this fine Monday morning in Siem Reap Province was going to be one of those days. We were on our way to an organic farm to learn about composting and organic vegetable production in Cambodia. I don't recall anyone but Chef Pola being excited about the compost. What could possibly go wrong about 15 kilometers outside the city on a cloudy day with barely any food and hungry mosquitoes? 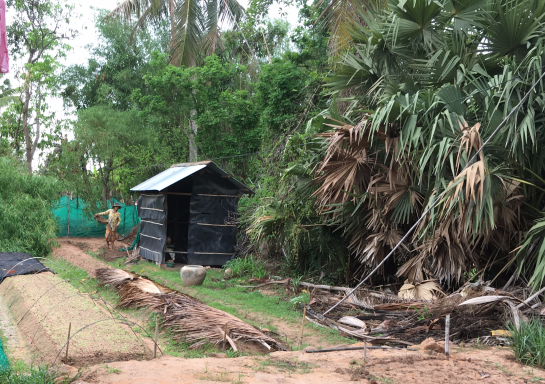 Nothing really, other than a few bug bites on my ankles (par for the course) and blood sugar crashes for those of us who require protein for breakfast. It really could have been worse. I thought about this day as the yin to yesterday's noodle binge yang.  Too much food one day, too little the next – it would all work out. Enjoy the moment. 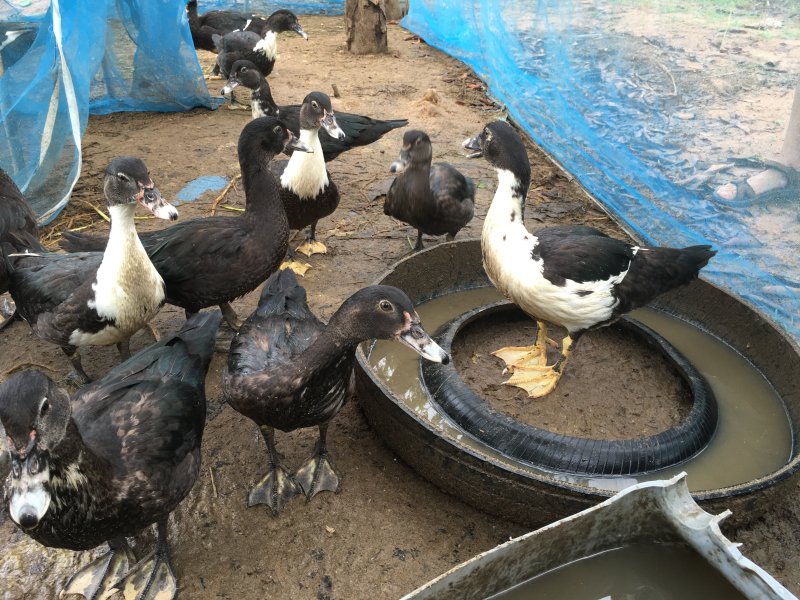 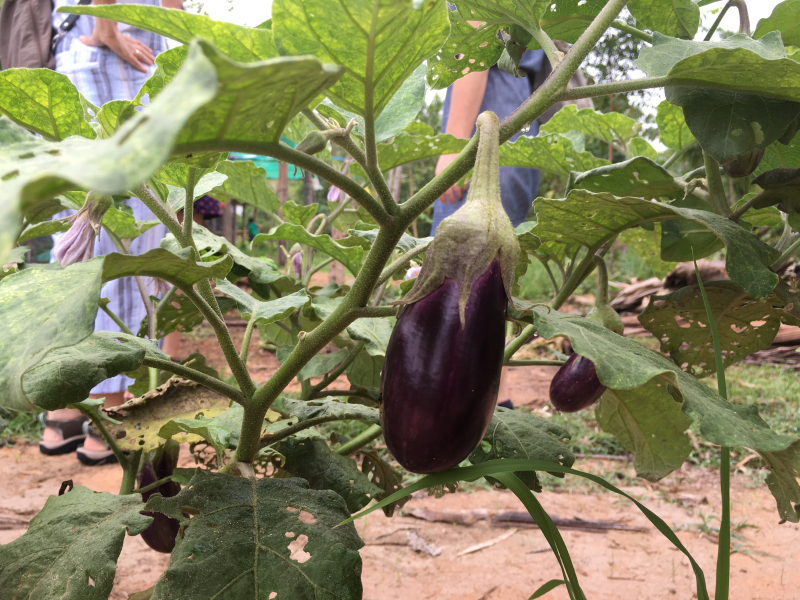 and eggplant plants and 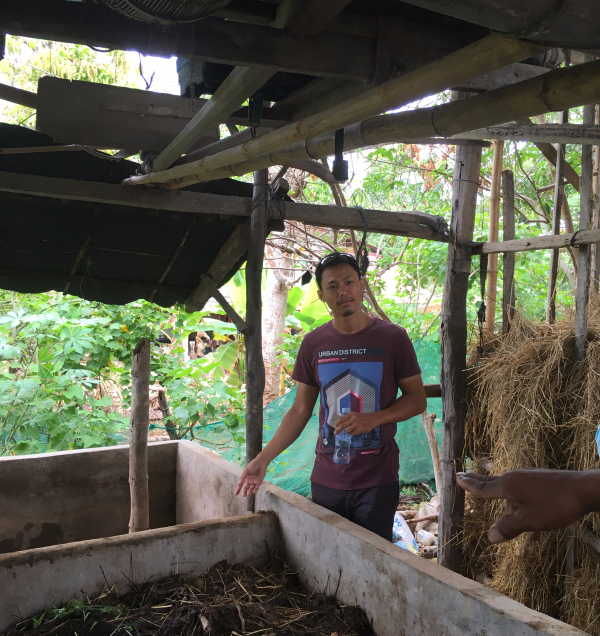 a chef talking about compost – asking "What is the word for..ah 'animal shit'?" To which we replied, giggling, "animal shit." We could have been helpful and said "manure" but what is the fun in that? 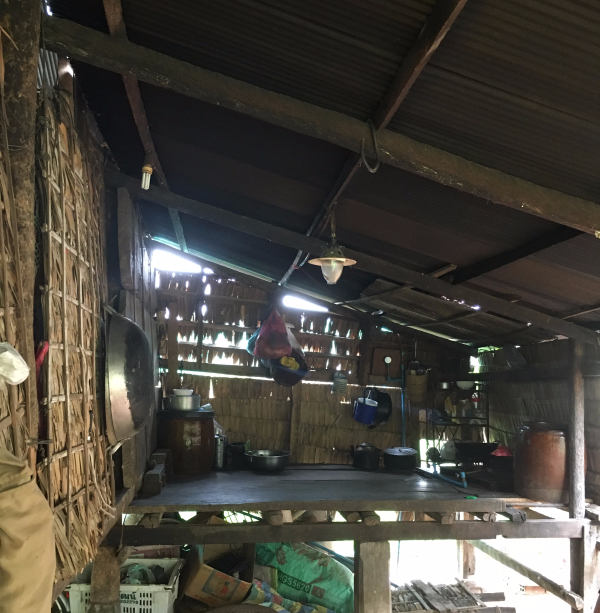 This is the kitchen of the very hospitable farmer who opened up their farm and home to us to see and learn. 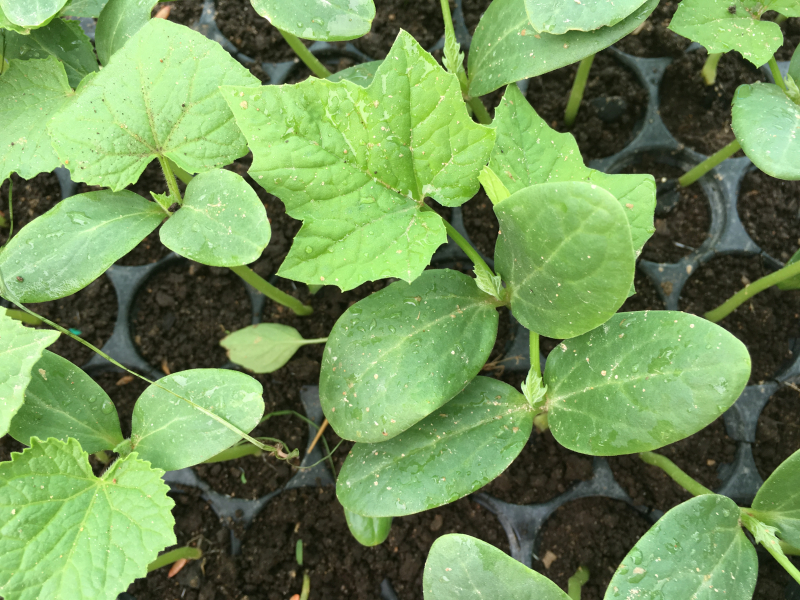 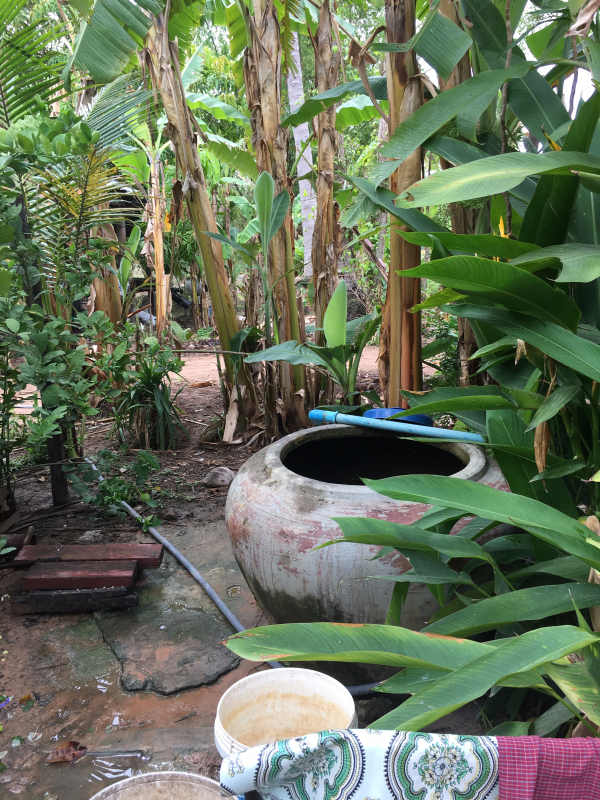 We were there quite awhile, wandering about the property, photographing, chatting, watching a baby cow being fed.  With the drought some of the mother cows have no milk, so the calves must be bottle fed. 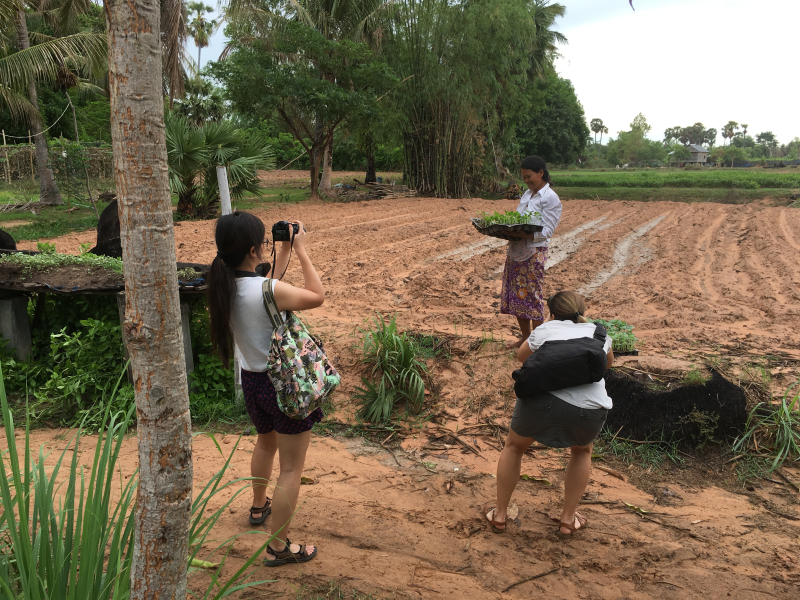 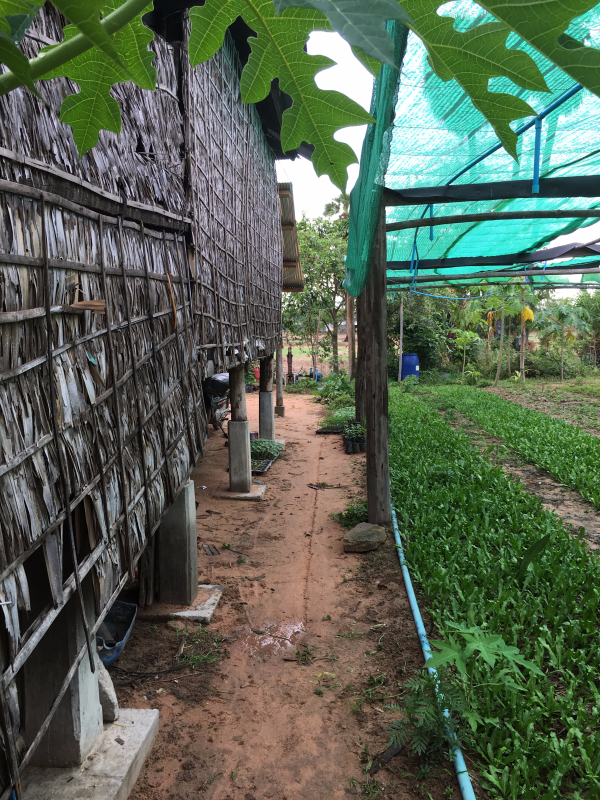 The organic farmer in Cambodia gets more profit from their yield but the process to transition can be risky (as it means you may not have a marketable crop in the first growing season, or the host of tropical bugs may get it). It also requires doing things differently, learning a new skill – luckily there is a training program for this, and our host farmer was one of the teachers. 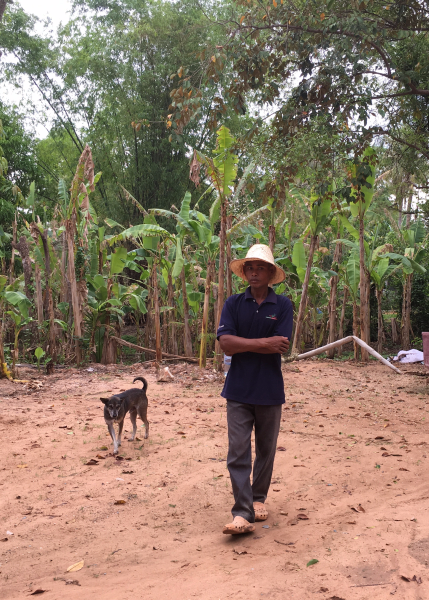 His family has been doing it long enough to teach and lead others on the path. 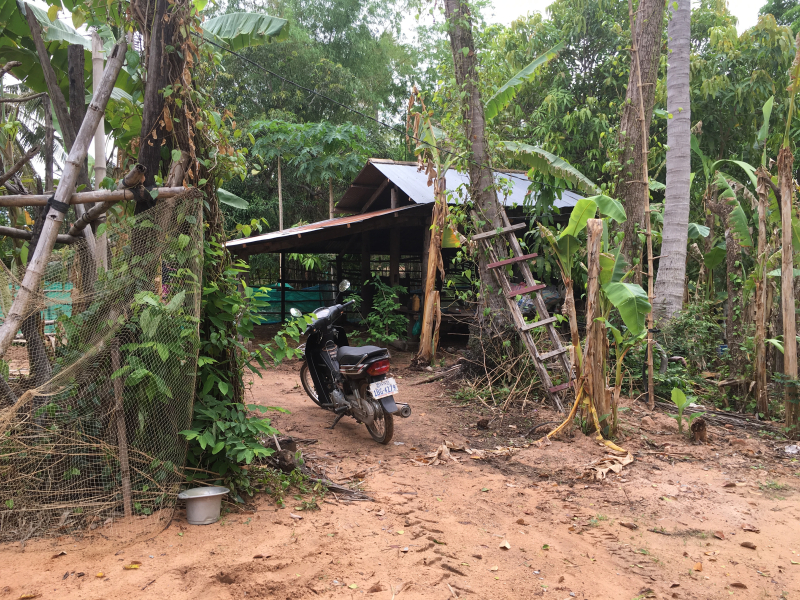 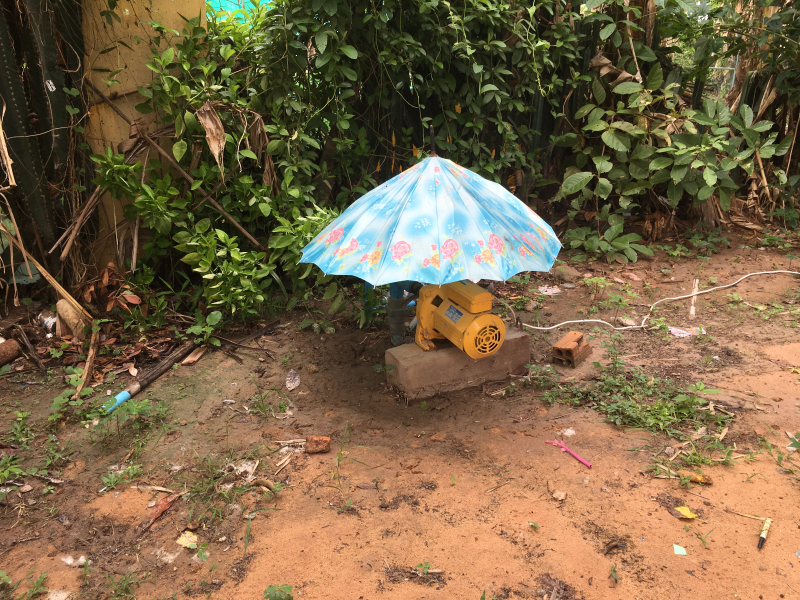 But their generator still needed an umbrella. After much mulling and documenting of the farm (about three hours) we returned to the "city" of Siem Reap and to Chef Pola's restaurant Mie.  It felt like it was noon, but it was only 9:30am.  We were one hour behind schedule and people were starting to get  wee bit restless for sustenance. 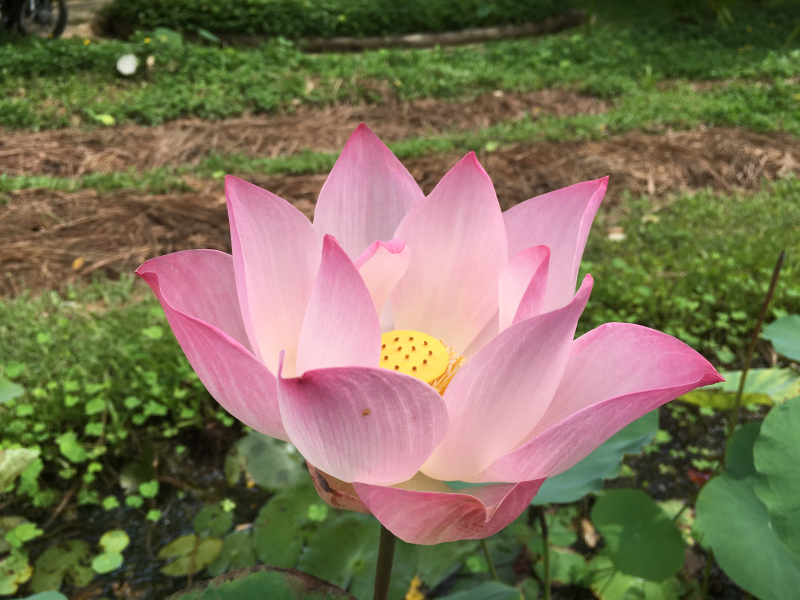 Despite being greeted by beautiful lotus blossoms when we entered the grounds. 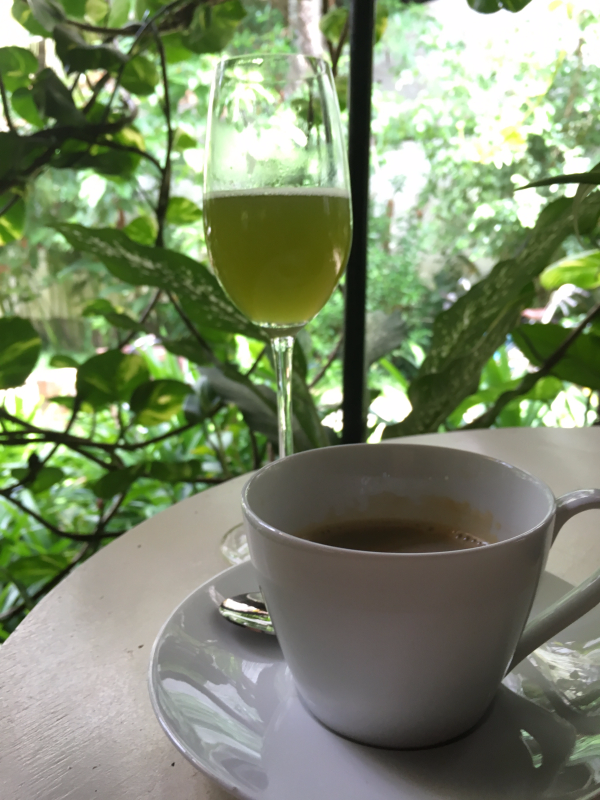 Then given coffee and mint drinks to stave off the hunger. There were minor breakdowns, and I made a joke about this being the "long march." I think one person understood what I was talking about, but it didn't matter, right or not, it was still a very long way away from lunch. One group started working on styled food photography and another (including me) went into the kitchen to watch chef cook and get a lesson in Cambodian cuisine. Here are some of the primary ingredients in Cambodian cookery: ginger, galangal, lemongrass, chili, garlic and citrus (lime primarily). 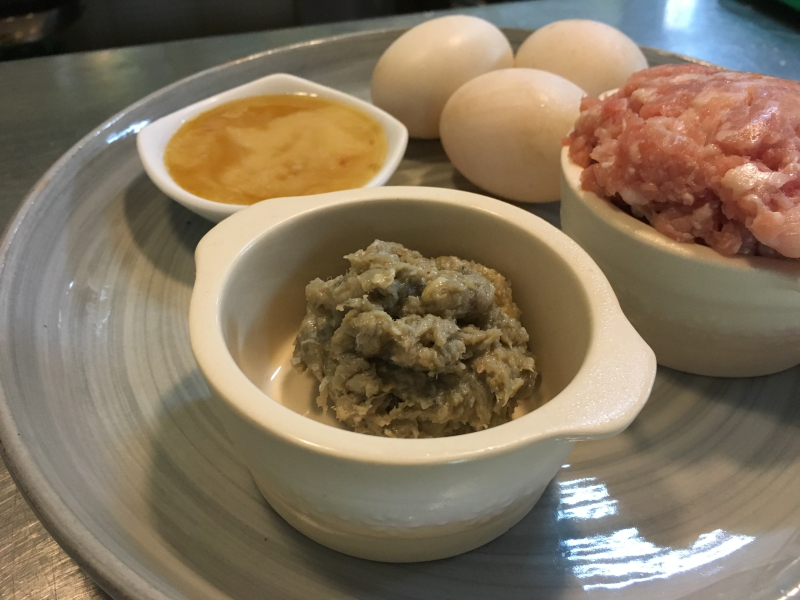 The other ingredient, in a lot of Cambodian food, is prahok (the greyish lump above).  This ingredient is spared from a lot of food served to westerners in Cambodia (usually substituted with pork) because our palate cannot handle the strong and unique deep rich umami of its fermented fish-ness.  It is definitely strong, I did not find it unpleasant, but most of those around me did not eat the dish that this combination featured here eventually made (essentially a pork and prahok meatloaf). 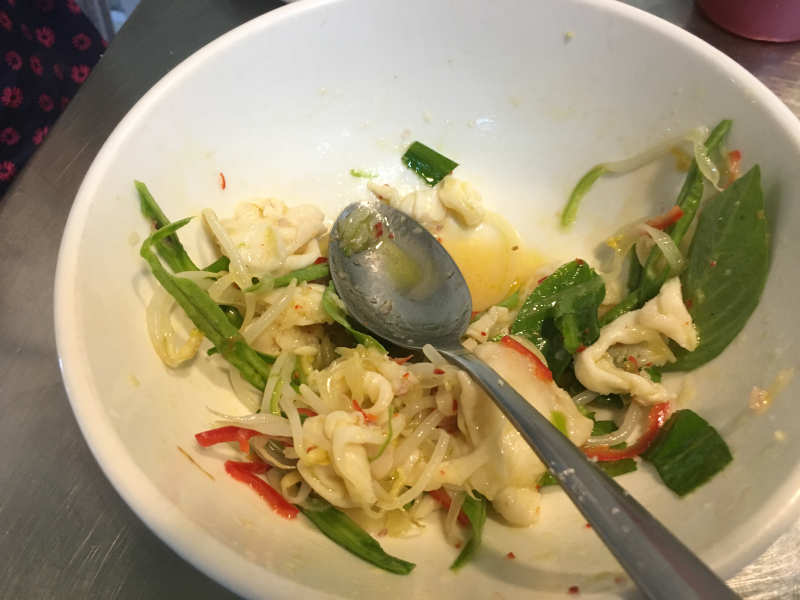 This ceviche however, was the bomb-diggity 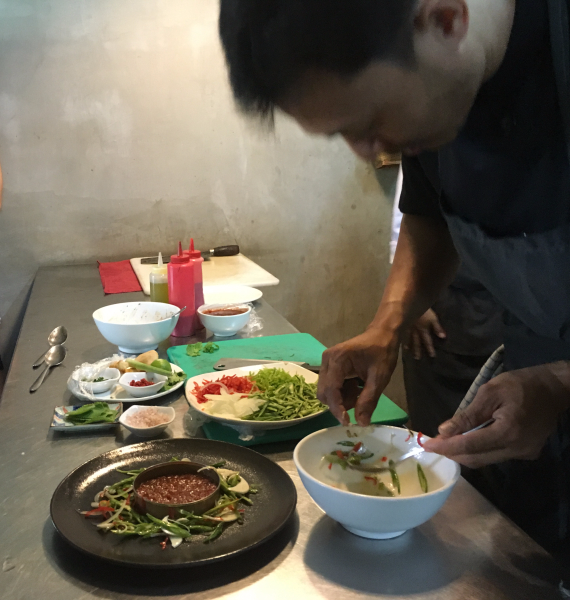 as was this beef tartare (neither dish being something I associate with Cambodia, but definitely held the flavors of the country in their execution). 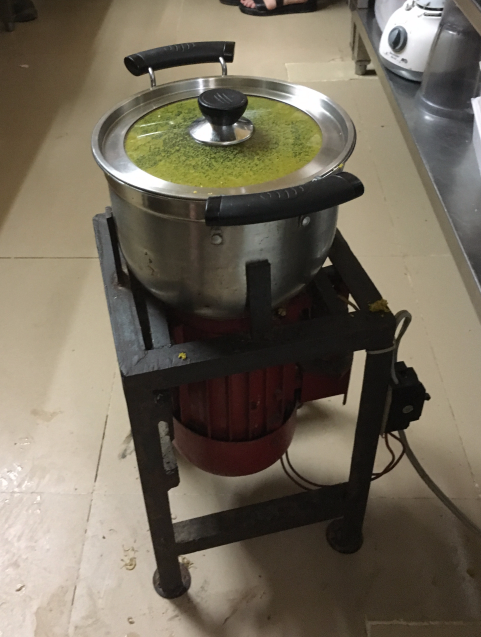 Meanwhile the cooking lesson continued on to dish 5 and curry – where we got to meet Chef Pola's food processor.  This little lovely is made with a washing machine motor and can chew through an entire gallon of lemon grass in 2 minutes or less. I don't know if any of you out there have put lemon grass into a food processor before – it kind of refuses to be pulverized – and threatens the motor of your Cuisinart.  This custom piece of equipment takes it out like a champ. 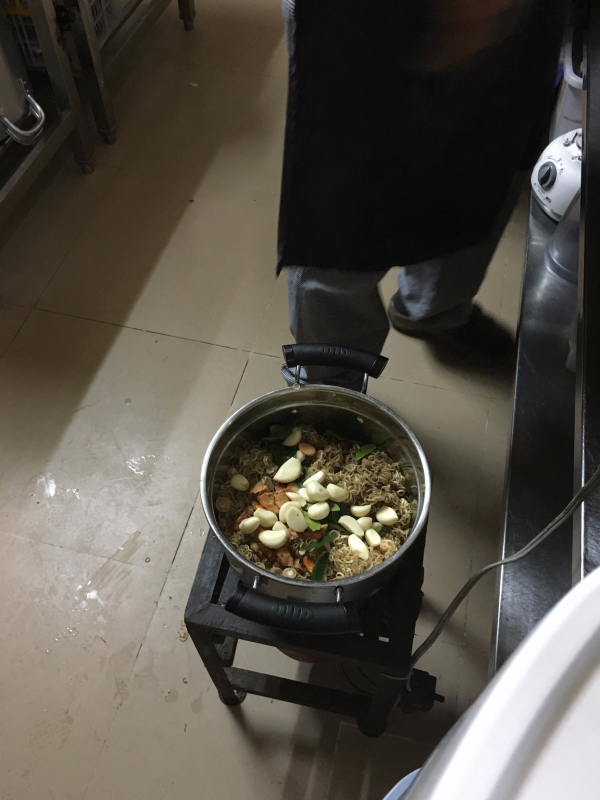 A message from above declared that the natives were finally beyond restless and food needed to be served – so the last two dishes of the cooking lesson were called off, but not before I got to smell chef's curry. The end of my long march was the shambala of all smells – a cloud burst of lemongrass ginger garlic bounty – a lake of comfort I could drown in. 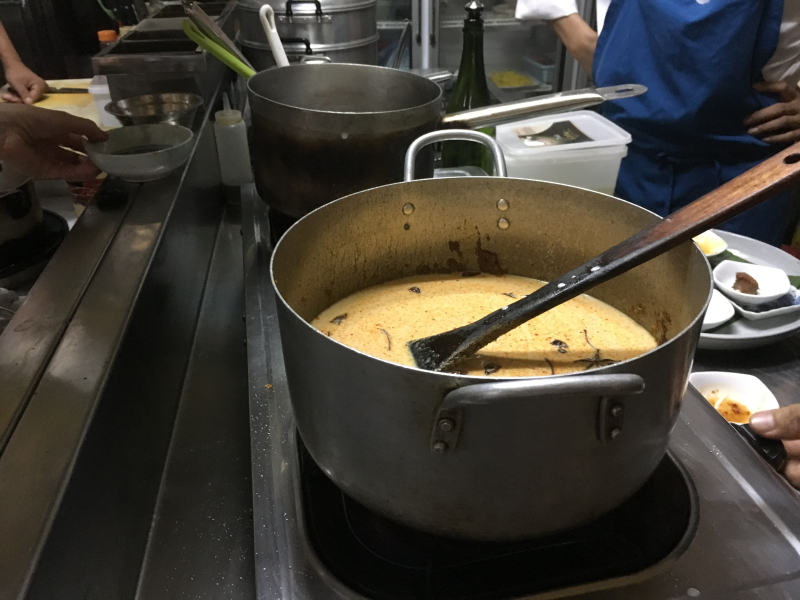 Except I too was hungry to stay there and was so happy to see this placed in front of me when I sat at the lunch table. 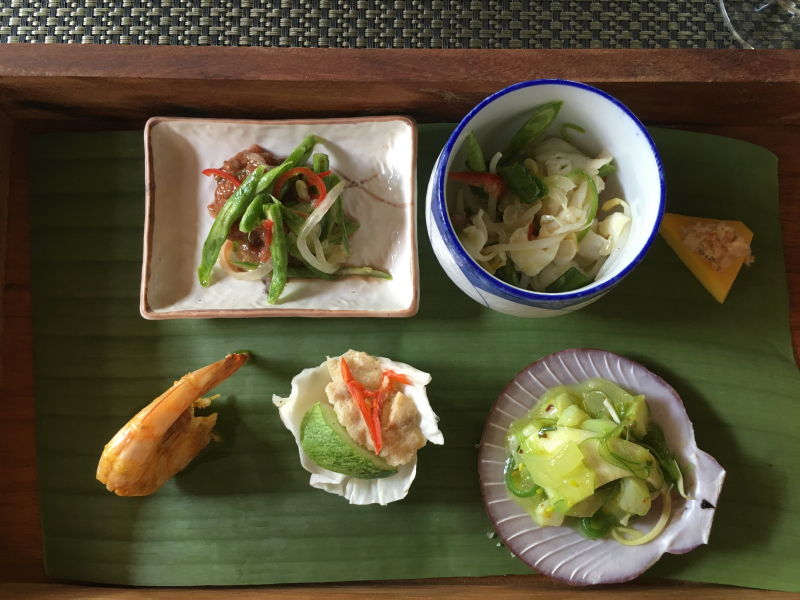 The long march was over and the land of plenty awaited my taste buds. 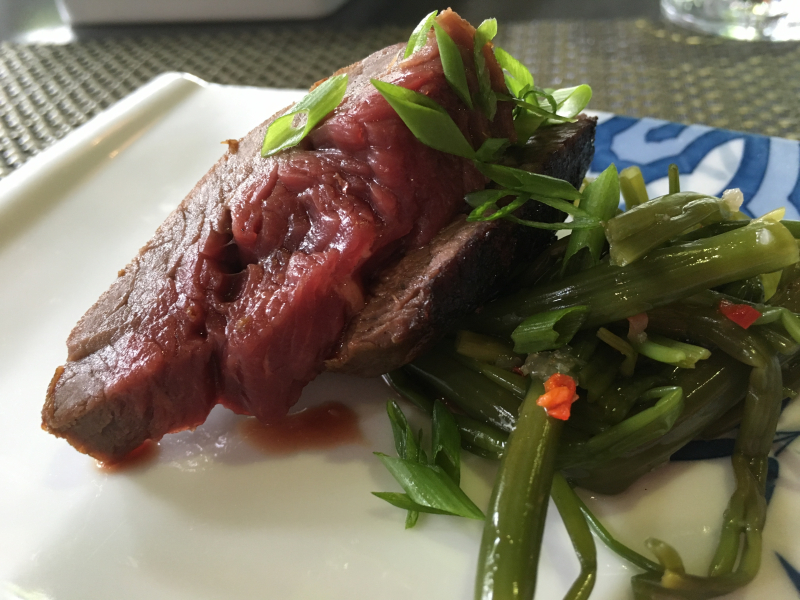 Beef, an unexpected privilege, appeared on our plates, aged at that.  So tender and tasty, so beautifully plated.  Everything organically sourced and expertly prepared by chef and his team. If Chef Pola wanted to leave his homeland, there is a place for him on the international stage of super chefs – but he is happy, with his one restaurant, cooking.  On the first night we met him, he introduced himself as "the cook" not "Chef Pola."  We westerners insisted on calling him chef.  His lack of ego, and gratitude toward his mother for his skills is a beautiful thing. As was this ox tail dish – which everyone was surprised by – but in a place where you have no refrigeration, no freezer, ox tail cannot be saved until winter.  And what is winter in Cambodia?  70 degrees Fahrenheit at night?  There is no time but the present for the hearty taste of a cow tail.  So good – and using every part of the animal. Then there was this.  I was too full by this time to actually ingest this beautifully plated dessert, but I could admire it as a work of art. Here is a mung bean panna cotta with mango sorbet and sweet sticky rice for the win.  And the food coma.  We took a vote at the table that we needed a couple hours between lunch and the afternoon discussion about food trends.  There was a swimming pool with my name on it to wash the 8 hour morning off. 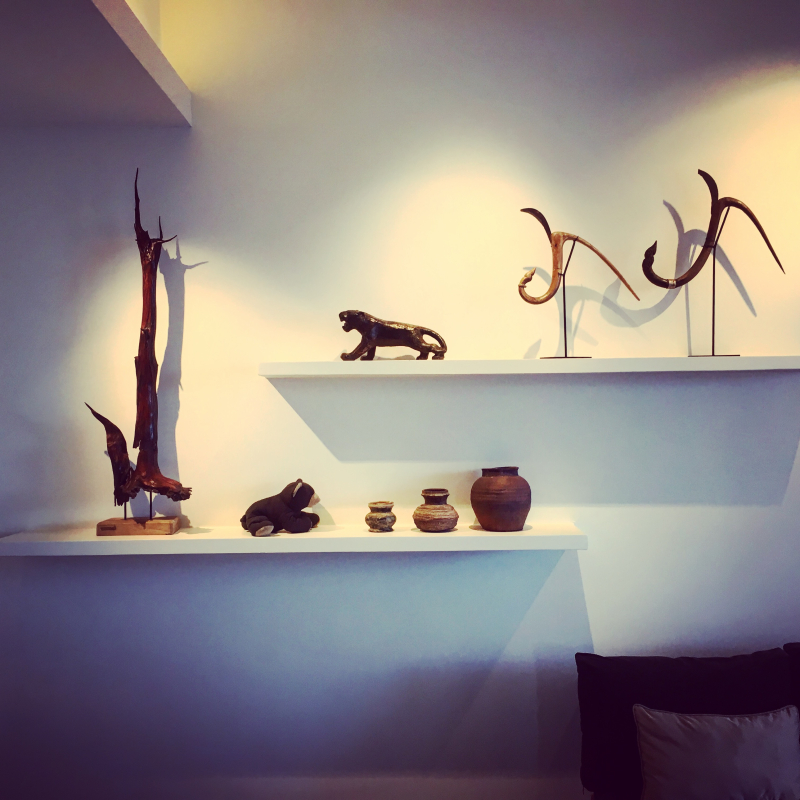 I returned to my hotel room to find that Jimbo had had an adventure of his own.